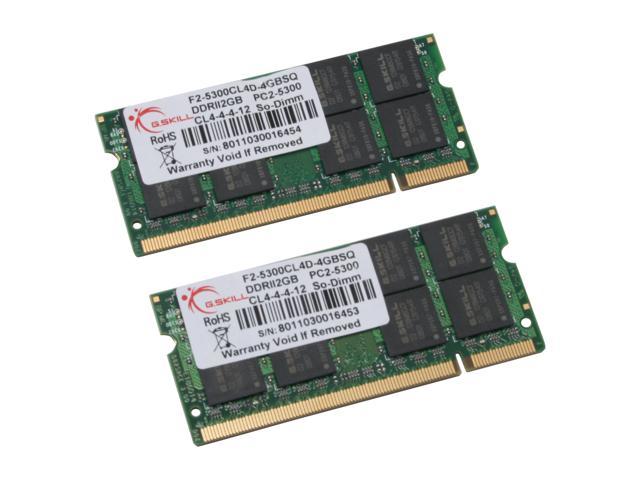 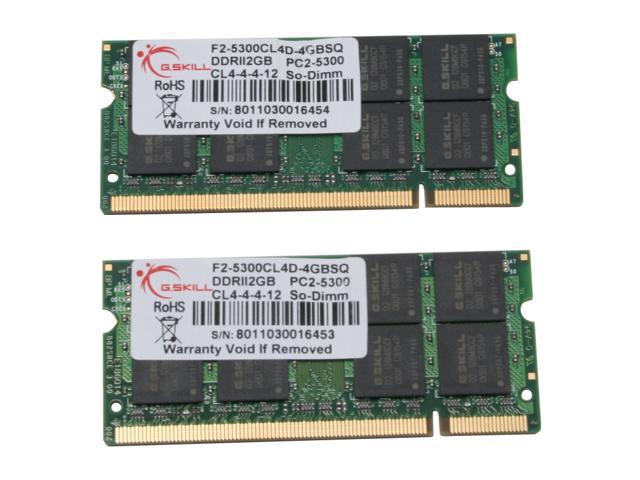 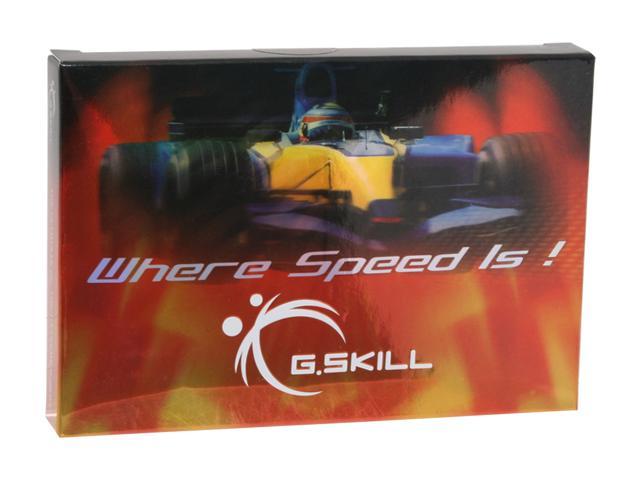 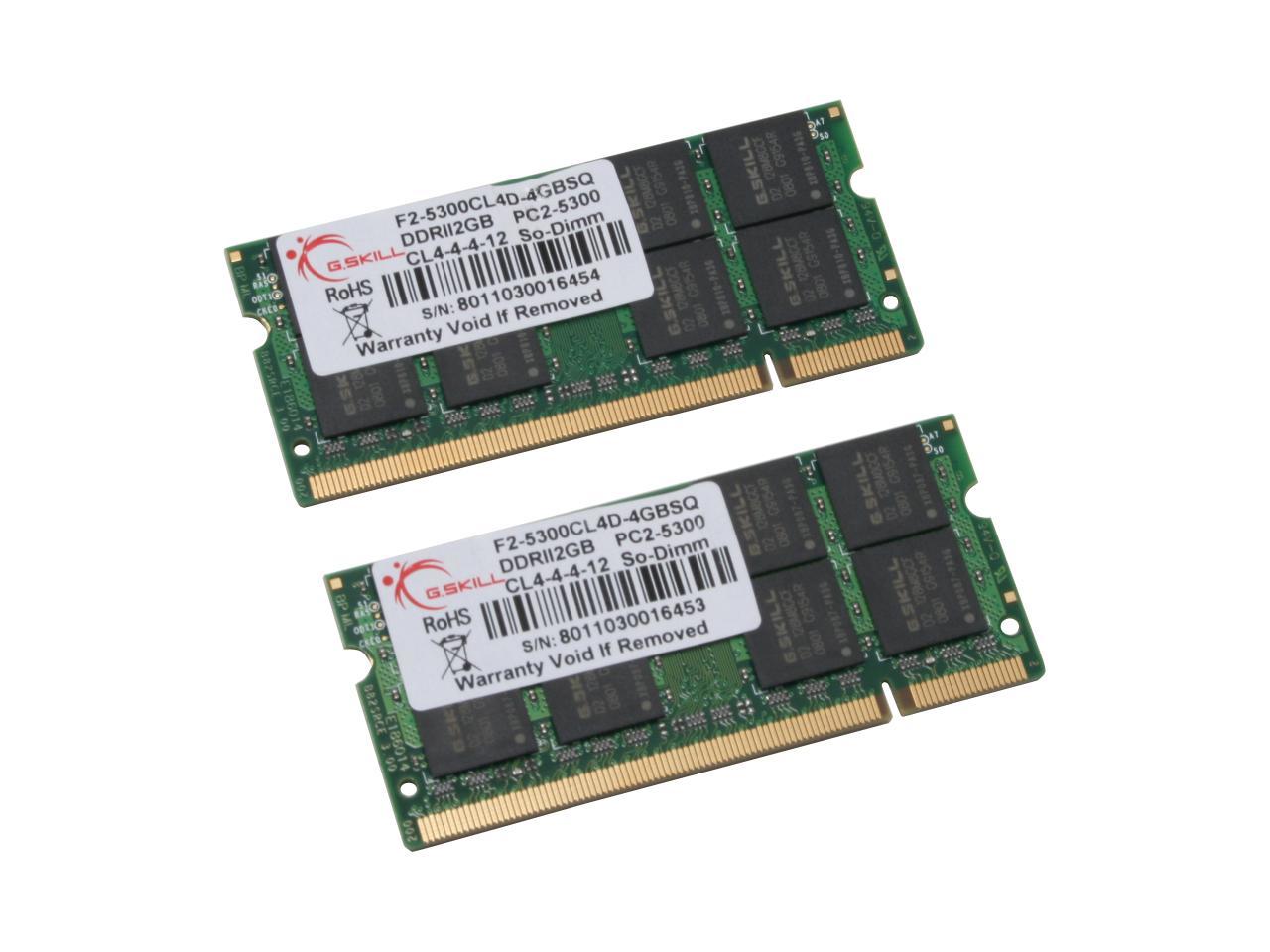 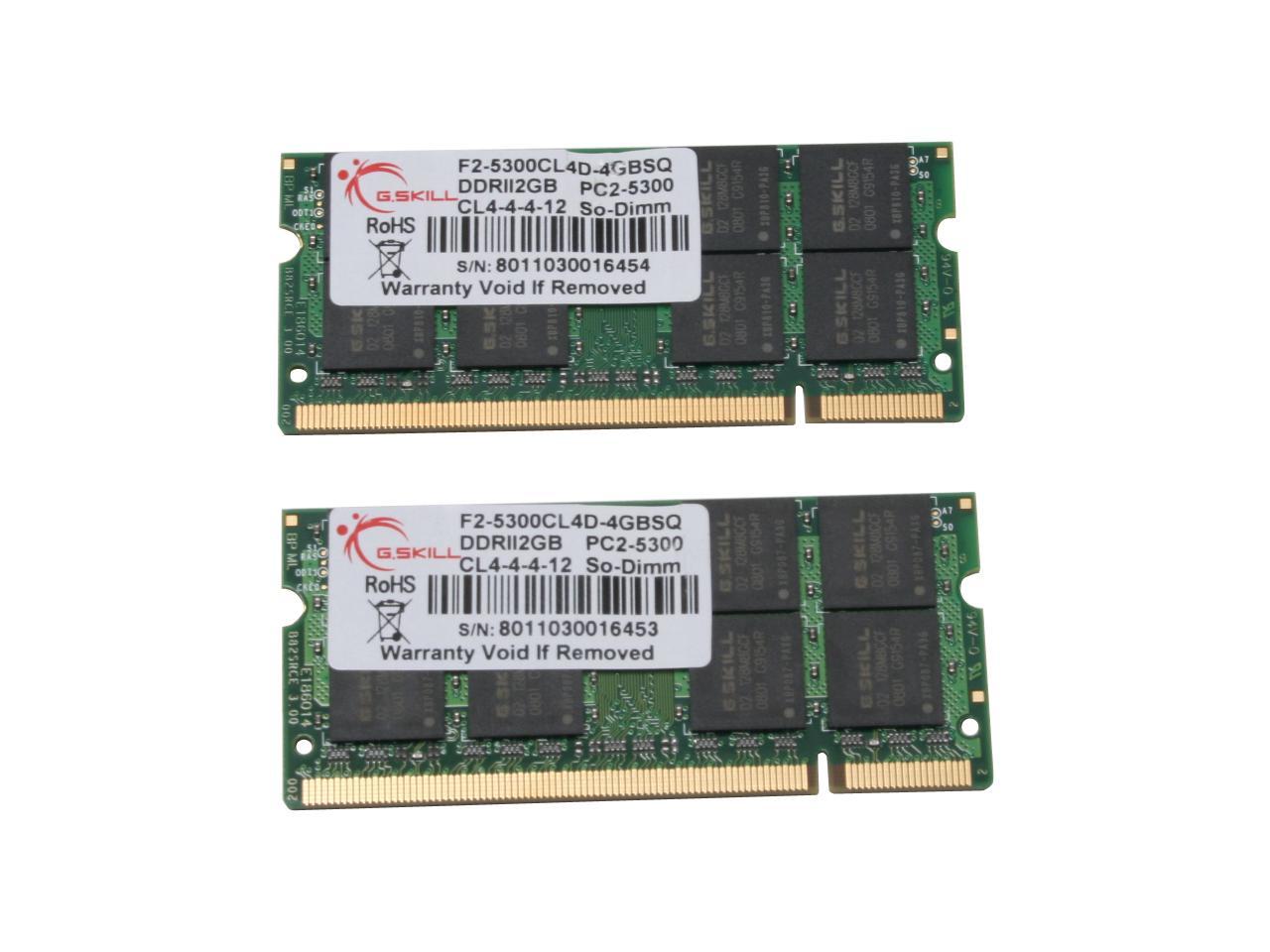 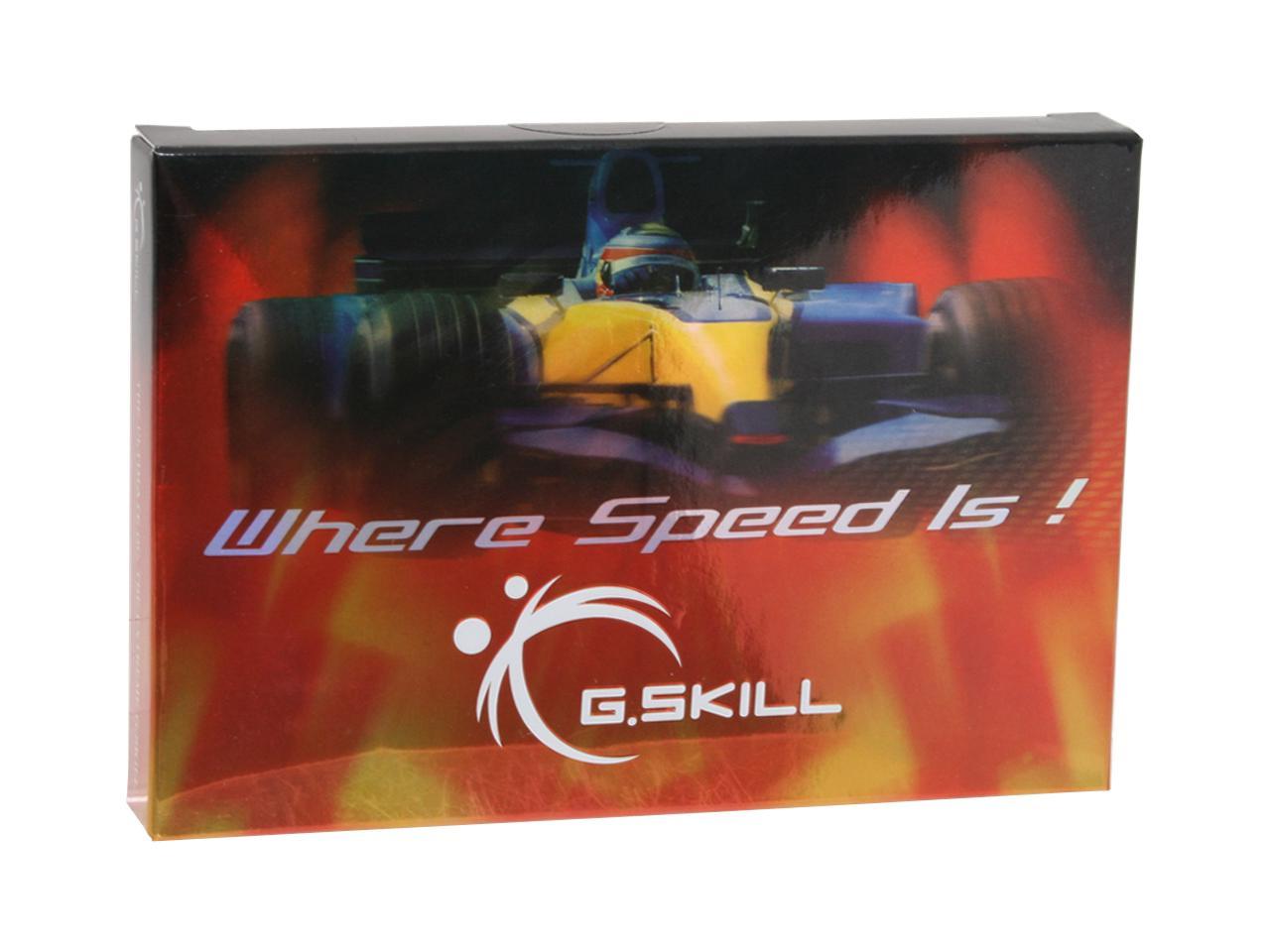 (319) Write a Review
OUT OF STOCK.
Overview
Specs
Reviews

Adding more RAM is an easy yet effective way to improve your system performance; more memory often means responsive multitasking and faster program switching. The G.SKILL DDR2 memory delivers fast speed and low latency to address your daily needs in work and play, all without a hit on your wallet. Quality components and construction ensure stability and durability you can count on. Add this dual-channel memory kit to your system and watch the performance skyrocket.

Pros: Fast memory, great compatibility, no BIOS tweaking needed to make it work at full speed with my Lenovo T61. Upped both my Vista RAM and Vista Graphics scores by 0.2 (due to shared memory for graphics the graphics speed is increased)

Overall Review: This memory was a lot cheaper to buy for the T61 than buying the laptop pre-fitted with 4GB of slower memory direct from Lenovo. Due to the memory setting CL4 via the SPD, the laptop automatically took advantage of the faster speed, which is good since the T61 BIOS gives you no ability to tweak those settings.

Pros: Bought to replace the 2gb in my Lenovo T60 and replace with this 4gb pair. Bottom line: a noticable performance improvement! I was always a little dissapointed with the speed of my Core2 T7600 IBM T60 with 2gb...just thought it should have been a LOT faster. Well - it is now! Don't know whether it is because I now have 3gb memory available (running XP Professional 32-bit) OR because the timings are indeed better (now 4-4-4-12-20)...maybe due to both reasons, but I am very pleased with the result! And, man, is good memory inexpensive these days!

Overall Review: They look cool, too! Too bad there aren't many laptops with plastic windows to see inside...;)

Cons: - NONE! I can't say a single bad thing about this RAM set so I'll just use this space to fanboy it up! I think my head would explode if it were free or came with heatspreaders. It would destroy Chuck Norris in a game of memory. G.Skill really knows what they're doing. Hell, I'd buy clothes if they made them as good as their RAM. =)

Overall Review: This is by far the smartest choice I ever made in computer parts. Installed this in a Dell Inspiron 1720. DDR2-667 So-Dimm (4Gb total) is the best the mobo will handle but with a CAS of 4-4-4-12 is just awesome. I unfortunately run 32-Bit Vista but it helps when I'm multitabbing online while working on music or graphic design. Even made WoW viable! =)

Pros: Replaced the 2 GIGs that came with my ASUS F8SV-B1 with 4 gigs of this RAM.. With updated graphics driver and the NEW RAM I went from 5.1 gaming performance to 5.3 in VISTA gaming index. I am now showing 1.5Gigs of total Vram Vs 1 gig total it had before! Yes 3 gigs of system ram shows because of Vista 32 but I say it is better to get 2X2 gigs matched for dual channel performance and this CAS latency = faster by a hair..But if performance is what you want this will deliver for that extra 20 bux you will spend on this vs the cheaper 4gigs.

Cons: I actually was considering the Heat spreader version of the 5 cas G.Skill until I read forums about issues with heat spreaders in notebook ram..NO CONS what so ever with this purchase..

Overall Review: On stock ASUS Nvidia driver for the 8600GT that came in this lappy GEARS OF WAR LOOKED AWESOME but I was getting some choppiness and had to tone down the resolution. After New Driver and RAM sticks. OH MY..Gears, RUNS BUTTERY SMOOTH on 1440X900 Native rez all on HIGH to MED settings. Stunning on a little 14 inch laptop! Considering getting really GOOD RAM? I can't recommend better RAM for Laptop Gamers.. I was VERY impressed with the performance gain..Everything is faster/smoother and there is not a dang thing wrong with that..Worth every penny I spent..

Pros: The very tight timings can make a world of difference and breath new life into a laptop that is limited to DDR2 667. The difference in Windows 7 scores went up by from 4.3 to 6.2. Those number will vary from machine to machine, but will impress none the less.

Pros: I bought it from Newegg, whose customer service is second-to-none, and the RMA was pleasant, easy, and fast.

Cons: This memory should work in my laptop (an HP TC4400), but does not work. Some of the memory causes blue-screens and random faults in programs. Some appears to work but causes the Prime95 stress test to fail. This memory has been available for several years, it previously used GSkill-labeled chips; now it uses Hynix. I bought this *exact* memory several years ago for this *exact* model laptop, and it works fine. I recently bought two more laptops of the *exact* same model (same subtype, same CPU, same *everything*). So I ordered two sets of this memory to bring them up to 4GB - this new memory does not work fine. Let's recap: I now have three TC4400 laptops, one set of F2-5300CL4D-4GBSQ I ordered several years ago, and two sets of F2-5300CL4D-4GBSQ that I just ordered. I then tested that the memory I ordered several years ago works in all three laptops flawlessly. I then tested the new memory and found that it fails in all three laptops consistently.

Overall Review: I tested each SO-DIMM independently. Each of the 4 SO-DIMMs create problems in all three laptops. One of the SO-DIMMs causes flagrant instability. The rest allow the system to limp along, but eventually cause program faults and blue screens. One of them appears to work pretty well, but the Prime95's stress test fails within a minute. I also just bought a new F2-5300CL4S-1GBSA destined for a different laptop, and it works just fine in these TC4400 laptops. This is pretty much rock-solid proof that these TC4400 laptops are capable of handling CL4 PC2 5300 memory, and for some reason the newer F2-5300CL4D-4GBSQ memory is substandard compared to what it used to be. I'm aiming this comment at GSKill customer service that chided a recent customer that "this memory doesn't work in all laptops - try the CL5". GSkill: This memory is not up to spec. These laptops offer no way to tune the memory or timings - this isn't an overclocking or hacking issue.

2 out of 2 people found this review helpful. Did you?
Manufacturer Response:
. Dear Customer We are sorry to hear you are having such issues. We are not asking you to overclock or adjust timings in a pre-built laptop that has a locked BIOS, we are asking you to use a CL5 rated memory which has different SPD timings that may work better for some laptops. If you believe your laptop can support CL4, please feel free to send them in for RMA and try new kits. We will also look into this issue to see if there is a problem with the latest batch. For all further questions or issues, please feel free to contact us directly. Thank you GSKILL SUPPORT Quality and customer service are our top priorities. Tech Support Email: ustech@gskillusa.com RMA Dept Email: rma@gskillusa.com G.Skill Forum: http://www.gskill.us/forum/
Alex B.
Ownership: 1 month to 1 year
Verified Owner
Nice memory8/30/2009 10:10:06 AM

Pros: I am using this batch for the past 2 months in my HP tx1220 (tx1000z). Going from stock 2GB (which was surprisingly great) to 4GB was not that much of a WOW. But Vista Ultimate 64-bit is snappier and there are noticeable improvements in program access speeds. This memory is something to consider in any event, because for this price it is a great mod.