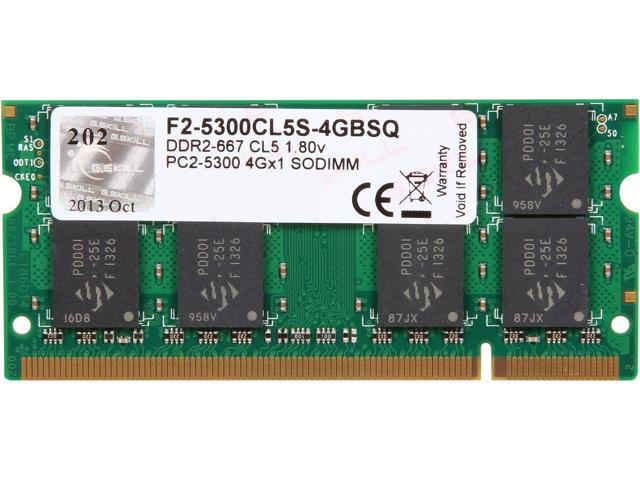 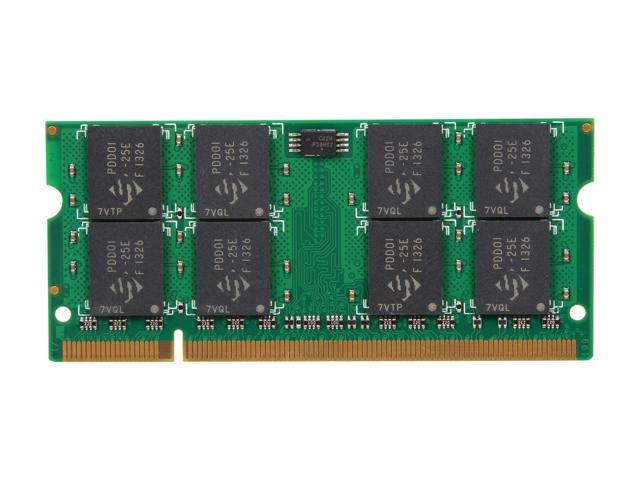 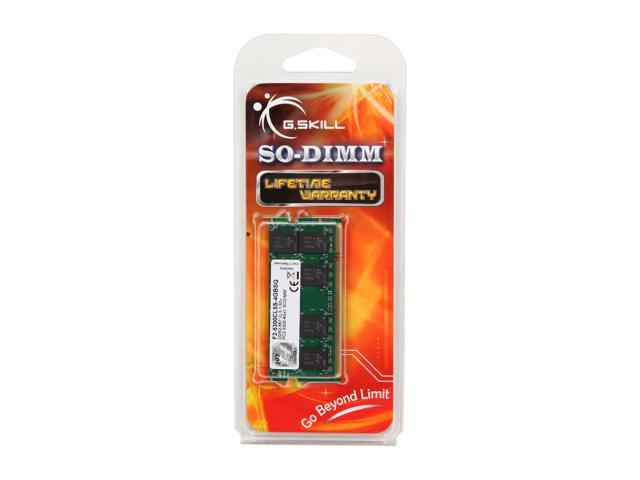 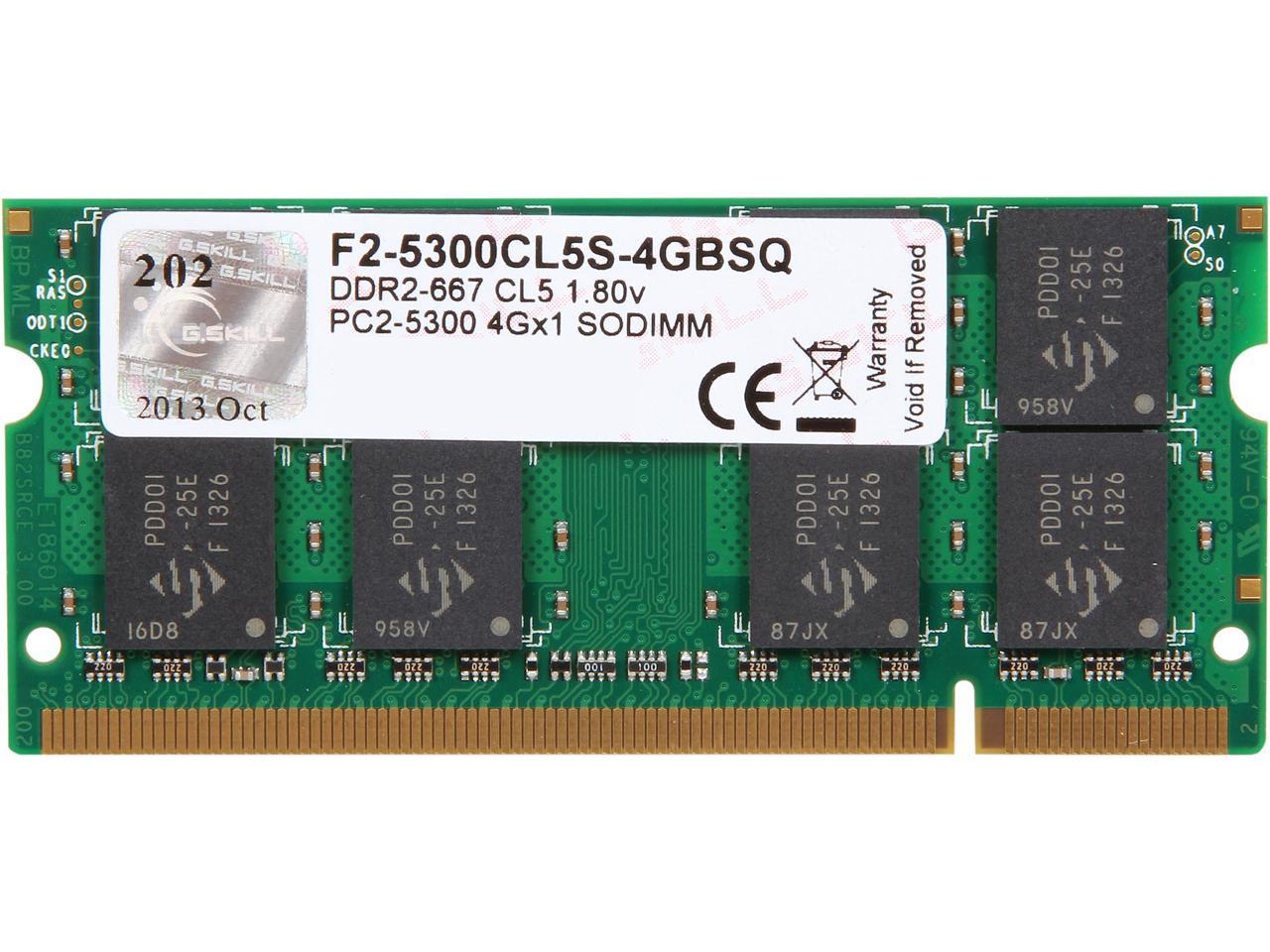 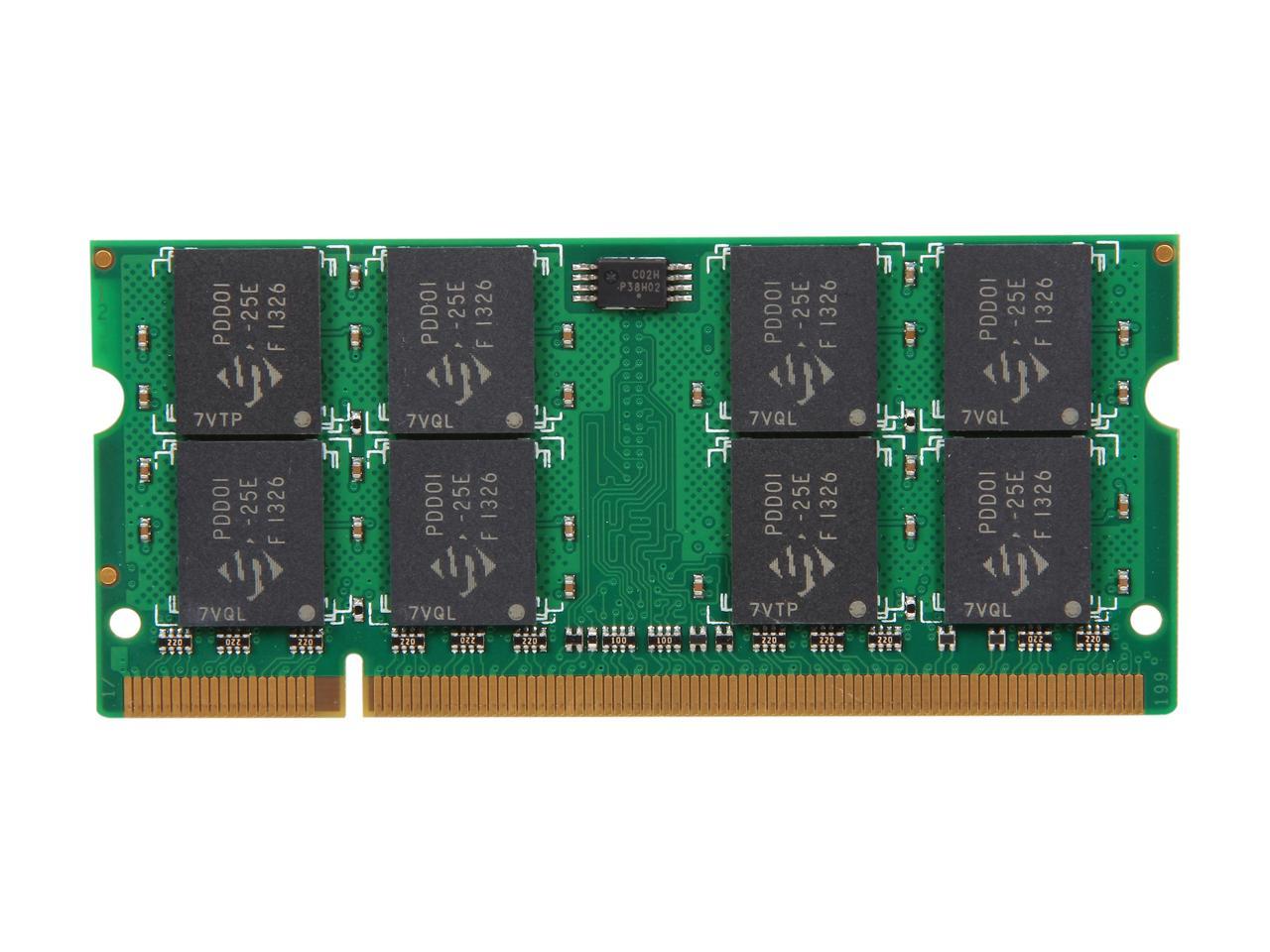 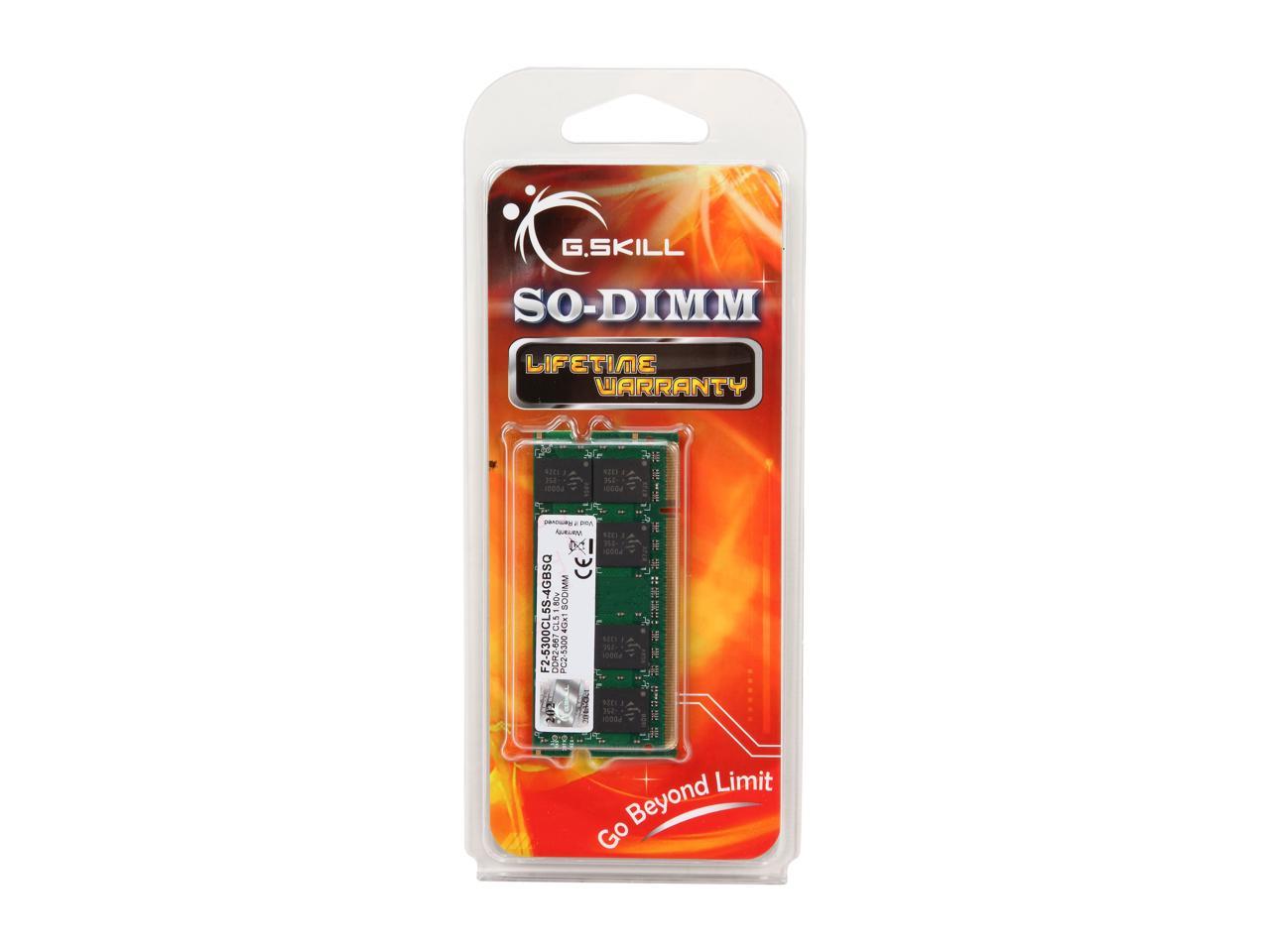 (66) Write a Review
OUT OF STOCK.
Overview
Specs
Reviews

Adding more RAM is an easy way to improve your system performance, as more memory often means responsive multitasking and faster program switching. The G.SKILL DDR2 memory delivers fast speed and low latency to address your daily needs, all without a hit on your wallet. Quality components and construction ensure stability and durability you can count on. Add this memory module to your system and watch the performance skyrocket.

Pros: Very fast RAM -- but still RAM. I have a MacBook Pro 3,1 Rev. (Santa Rosa) 2.6 GHZ. 1st, it is completely true that 6GB works (so far at least). The 4GB stick alone performed noticeably better than 2 x 2GB sticks of Corsair "Mac Memory". I did not experience the sort of revelatory change that other reviewers have noted. It does not feel like I have a "new computer" or that my computer is now capale of super feats. It does, however, seem that my computer became a more capable multi-tasker. But I have also recently begun using SLC SSDs (I've tried OCZ -- not mind-blowing, Memoright -- very capable, MTRON -- great for the price, and finally the X-25E, which pretty much does live up to the hype and definitely significantly improved multi-tasking abilities of the MBP, although there are some issues using it with Leopard and/or the MBP). I think the combination of the two is invaluable and they work hand-in-hand. I wouldn't say anything like "just buy it", but it is helpful.

Cons: No cons really, but a cautionary note: the only problem I had was that the G.Skill did not play well with the Corsair memory and my computer would not fire up with the 4GB G.Skill stick and a 2GB Corsair "Mac Memory" stick. After thinking that I'd fried my computer, I did some very, very simple problem solving and tried each stick (4GB and each of the two 2GB sticks individually) and, discovered, of course, that the Corsair and G.Skill are apparently incompatible.

Overall Review: $200.00 on 4GB of RAM is a significant investment. For those inclined to consider the advice of user who spends 14-16 hours a day doing heavy multi-tasking on a laptop, if you're looking for more speed, try an SSD (SLC) 1st. Do some shopping, you can find great deals here or one specific 32GB SLC SSD for about $220.00. The speed and multi-tasking difference is more significant with that investment. I would then buy the 4GB G.Skill.

Overall Review: Most laptops have dual channel memory which needs matched sets of memory to perform at the maximum level. Some sites out there link to this memory for laptop use, but if you want to use 8GB, or two 4GB modules (=8GB) buying two of this item may not give you the ultimate performance since they are singles, not matched sets. For the matched sets you need to order N82E16820231210, which is a dual set of these, the description is - G.SKILL 8GB (2 x 4GB) 200-Pin DDR2 SO-DIMM DDR2 667 (PC2 5300) Laptop Memory Model F2-5300CL5D-8GBSQ. Anyway, buying memory is hard to figure out so thought I'd post this comment.

Manufacturer Response:
. Dear Customer Thank you for your G.Skill purchase and review. Your comments should prove to be very useful for future potential buyers. With dual channel and triple channel computers, it is very important for the memory modules to match exactly. When mix matching kits even of the same exact model, you may encounter compatibility problems. For this reason, we have match tested full kits that are made to work together. If you have any further questions or issues, please feel free to contact us directly for assistance. Thank you GSKILL SUPPORT Quality and customer service are our top priorities. Tech Support Email: ustech@gskillusa.com RMA Dept Email: rma@gskillusa.com G.Skill Forum: http://www.gskill.us/forum/
Timothy P.
Ownership: less than 1 day
Verified Owner
6GB in Penryn 2.5ghz Macbook Pro11/11/2008 12:36:23 AM

Pros: When I learned that my chipset (Early 2008 multitouch penryn macbook pro) supported 6GB RAM with the 667 speed, I wasn't sure if the investment was worth it. Now that it's installed I can say it's a dramatic change. Before I had to be careful about how many big apps I had open, and I often had RAM paging which was slow.

Cons: the only con is that Leopard 10.5.5 doesn't support 8GB of RAM at this time. Snow Leopard will unlock this capacity as the hardware can support it on the Santa Rosa chipset. The only other con is that the RAM doesn't seem to work reliably in the bottom slot- forums are showing that the 4GB chip works better in the upper (higher) slot.

Overall Review: Now I have no pagins and all of my major apps are resident in RAM. The Virtual machines in Fusion are fast fast. I feel like the floodgates have been opened, I can see that the problem with the macbook pro was not the processor speed but the RAM. 6GB hit the sweet spot for my usage. I consistently use 5GB and having the 1 extra as a buffer is perfect. Awesome upgrade w/o any reservations!

Overall Review: Apparently, if you use 8GB of RAM on those two MacBook Pro model, you'll encounters some kernel panic and huge stability problems. I havn't tried that, so I cannot comment on it, but I can confirm that it is safe to use 6GB of RAM tho.

Overall Review: I am using this in combination with a G.Skill 2 GB stick for a total of 6 GB of RAM. Though this is more than the 4 GB "official" maximum in this model (aluminum body, 2.5 GHz Core 2), reports elsewhere indicate it works. So far no problems. Needed a bit more RAM to run a Windows VM without affecting performance. For those with this model, reports on the web indicate that the hardware supports 8 GB, but Mac OS X will slow to a crawl, so don't bother trying. However, 6 GB is stable.

Overall Review: I installed this in a MacBook Pro version 3,1 (late 2007) and went from 4GB to 6GB by replacing one of the 2GB chips with this one. Now the computer hardly does any page ins. You lose the dual channel from not having both memory slots using the same amount of memory but I haven't noticed any degradation in performance. Running VMWare et all seems to be smooth. Now I have a 500GB hard drive and 6GB memory. What more could one want?

Cons: - Price - That Apple does not tell the whole truth about what its machines can do.

Overall Review: Will wait for Snow Leopard and the price to come down before going to 8GB in each machine. The reviews for this product at Newegg.com are the best cutting edge information on memory in macs. Go figure!

Cons: Price is far from bottoming out (dope wars style).

Overall Review: Mac OS X 10.5.5 can recognize 6 GB of RAM in the MBP. There are several reports on the web that it cannot deal with 8 GB currently. There are some suggestions that it may be able to on current hardware in future machines, and I'll be looking out for that personally. But 6 GB definitely works in my C2D MacBook Pro (Jul 2007).