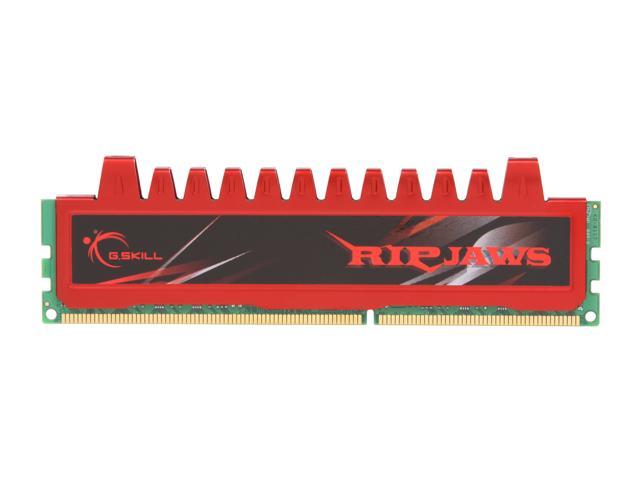 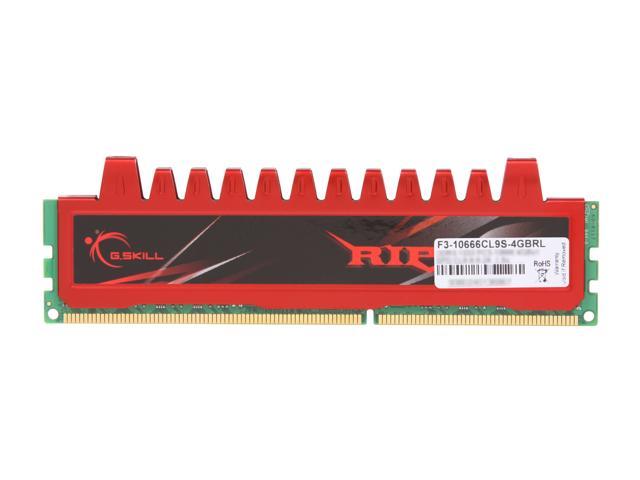 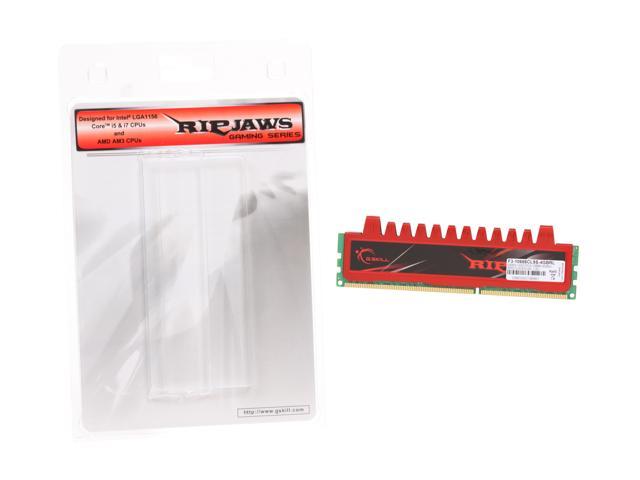 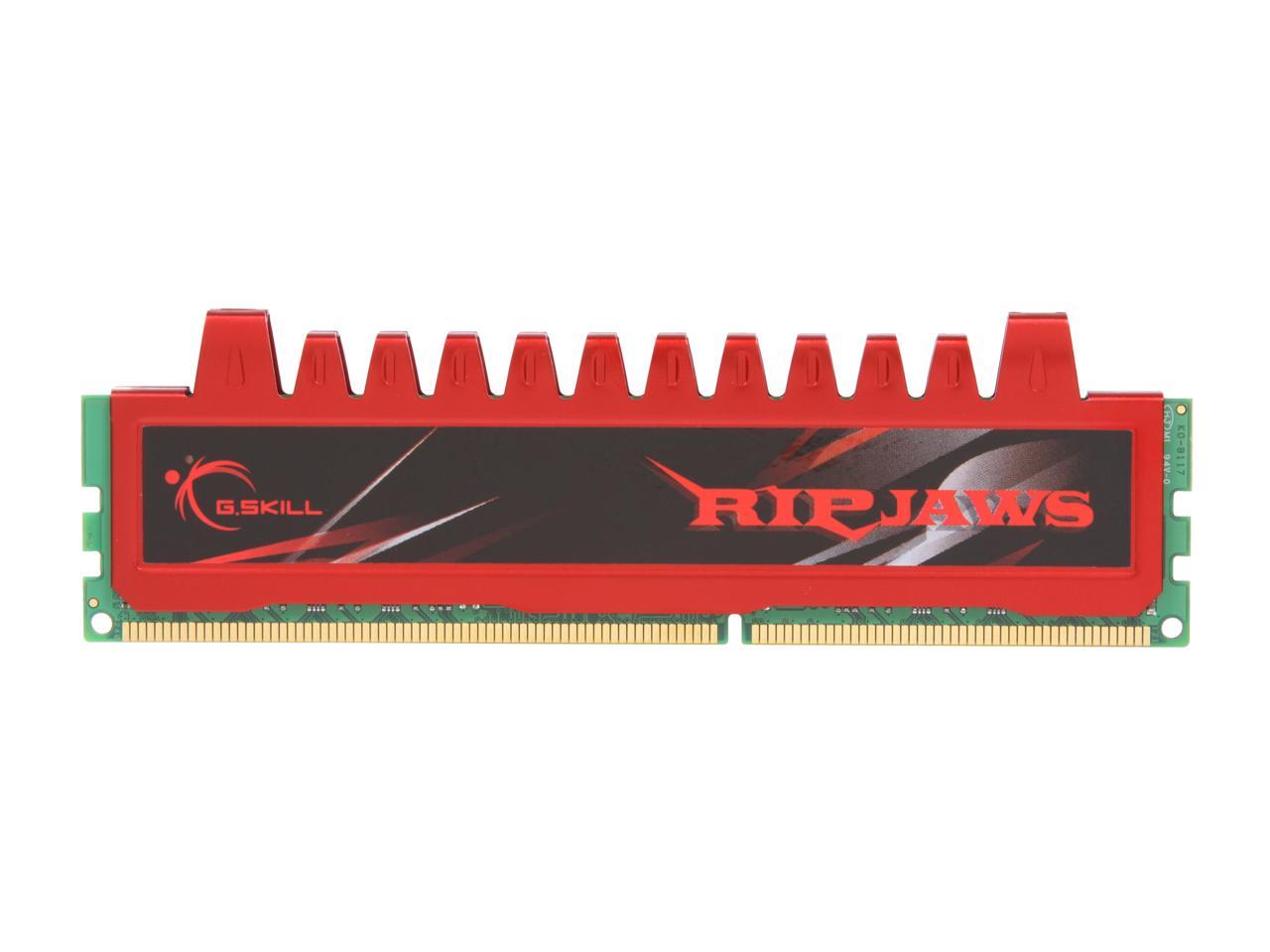 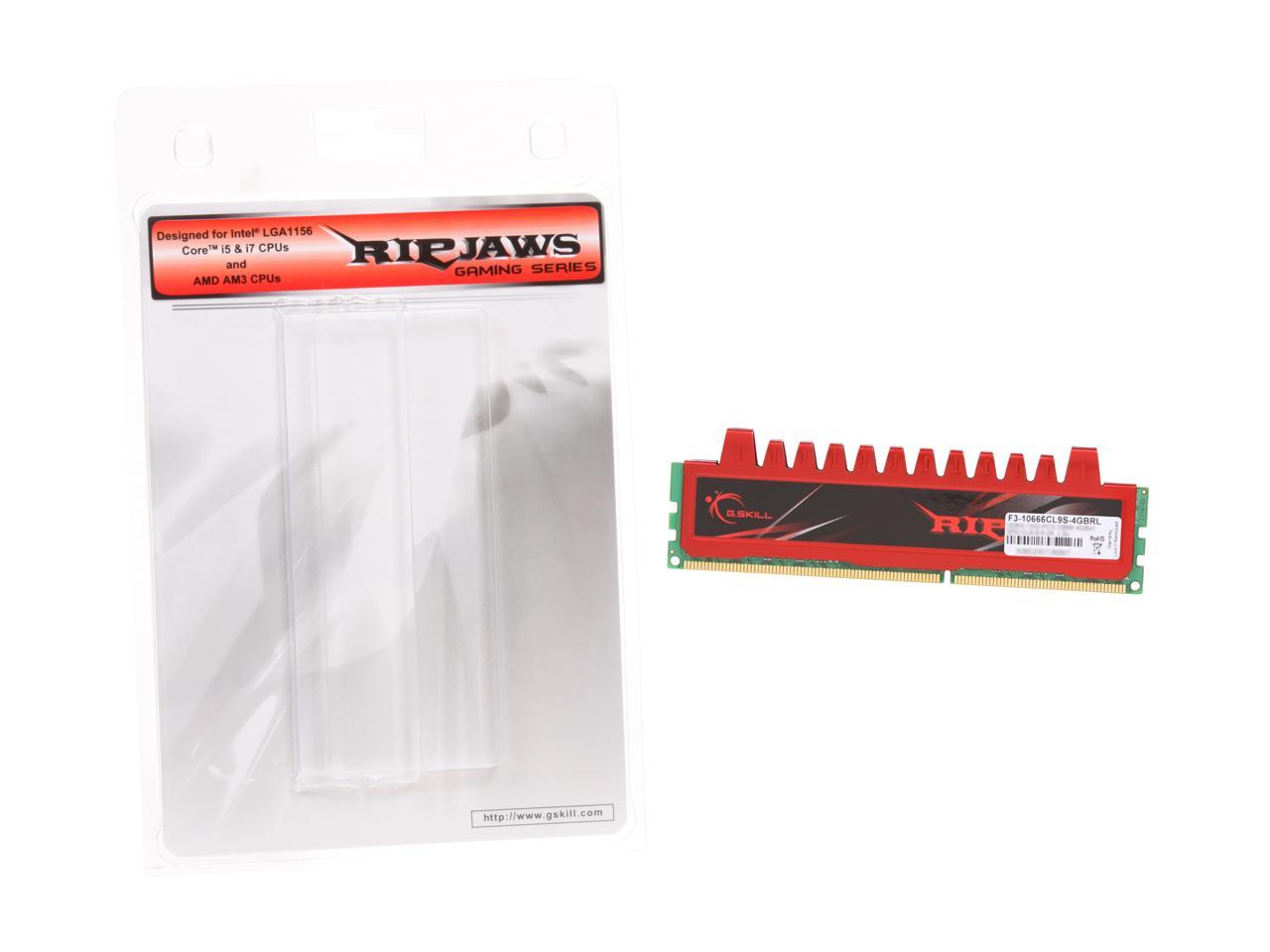 G.SKILL Ripjaws is the award-winning memory that delivers the best performance at the best price. It's designed for PC enthusiasts, and is available to the masses. With outstanding performance, first-class compatibility, and rock-solid reliability, it delivers a significant boost to your games or work, on both AMD and Intel platforms. Its uniquely designed heat spreader not only helps with dissipation, but also adds an aggressive look when installed in your chassis.

Cons: Died pretty soon. I purchased two sticks for two different machines and they both died 3 to 6 months apart. :(

Overall Review: One machine for was for work pc, an A6-3500 APU and the other was my personal 1090T based machine. GSKILL was got the replacement memory to me within a week! Amazing. I was expecting a few weeks at least. GREAT JOB GSKILL... I was a little worried having two sticks die so soon & suddenly, but with RMA service this good its worth it.

1 out of 1 people found this review helpful. Did you?
William F.
Ownership: 1 month to 1 year

Pros: These modules are still hanging in there since my last review.

Cons: They didn't come with any fuzzy dice.

Overall Review: G.Skill not only has some of the best memory on the market, but they have beyond awesome customer support and feedback. I have learned a lot about getting the most performance possible out of my hardware in a few short months since the start of my first PC build. With my new knowledge I have been shopping around for new/different memory with greater potential, and somehow keep finding myself with G.Skill memory in my shopping cart. Their prices are also typically cheaper than the competition. Nobody else compares to these guys. They will always have my business!

Did you find this review helpful?
Carlos A.
Ownership: 1 day to 1 week

Pros: Its G.Skill. When it works, it works very well.

Cons: This 4GB stick did not work. System would not boot. Inserted 2GB Mushkin RAM stick and booted up fine.

Overall Review: Newegg RMA process was painless. I ordered 4GB of Mushkin instead and it works great. Thats not to say G.Skill is all bad, this was my first bad experience with their RAM for that they get 3 eggs.

Did you find this review helpful?
Manufacturer Response:
. Dear Customer We apologize for the inconvenience. Please send the memory in for RMA and a new module should work better. Due to the nature of DRAM products, random defects can happen. For that reason, all G.Skill memory kits are backed by a lifetime guarantee for these types of situations. For whatever reason your memory is dead on arrival or becomes defective after a couple days, weeks, or years of use, we will exchange it with a new replacement without question. If you have any further questions or issues, please feel free to contact us directly and we will be glad to assist you Thank you GSKILL SUPPORT Quality and customer service are our top priorities. Tech Support Email: ustech@gskillusa.com RMA Dept Email: rma@gskillusa.com G.Skill Forum: http://www.gskill.us/forum/
Kim B.
Ownership: 1 month to 1 year
Verified Owner
High quality memory at a low price!1/12/2011 7:55:58 PM

Pros: I installed 4 of these into an ASUS M4A88TD-V EVO/USB3 board along with an AMD Phenom II X6 1090T Black Edition processor, all powered by a Corsair 750 watt PSU. OS is Windows Server 2008 R2 Standard (Windows NT 6.1). The memory is at stock/auto settings, nothing had to be adjusted in the BIOS. The GPU being used is a modest ASUS GeForce GTS 450. I'm a self-taught CG animation generalist and I use my system for all the various stages of the digital production pipeline. From concept art and matte painting with Photoshop through 3D work involving modeling, animation and rendering in Maya, through detailed texturing in Mari and sculpting in Mudbox, to 2K compositing of full floating point precision (32 bits per channel) imagery rendered from Maya using Nuke, to post production using Vegas, and final encoding and stream multiplexing of sequences using ffmpeg CLI and x264 CLI, to delivery with Encore. Of all the tasks I do, the 3D work tends to stress this memory the most.

Cons: NOT CONS: This memory is incredible, especially at this price, and the system is rock solid. As I work on dense scenes in Maya (especially with lots of foliage), the 16 GB limit is reached on the scenes consisting of hundreds of millions of polygons, but I don't have any issues with the memory itself; it just works. Rendering Maya scenes through the command line eases some load on the system as no UI has to be addressed, allowing 100% of the CPU cores to be maxed 24/7 for as many hours/days/weeks needed to render a project. DDR3 1333 memory is more than fast enough for 3D rendering, since it's mostly done in memory anyway, and such work generates a lot of data, especially for particles, fluids, and other dynamic simulation caches, so I prefer typical 7200 RPM hard drives over SSDs. Also when using Mental Ray for Maya, I'm able to create memory mapped files (.map), meaning partial instead of entire texture maps are loaded into memory to be accessed when invoked by shading algorithms.

Overall Review: What really impresses me is the amount of data I'm able to wrangle using a desktop system with 16 GB of memory. Over 100 million polygons in Mudbox are able to be easily sculpted, then normal and displacement maps exported for rendering later. Mari is also a fun experience with this much memory; Mari easily loads and works with models consisting of hundreds of 4096x4096 (or much larger) texture maps along with dynamic shading as the geometry is being painted, and Mari is smart and swaps data to disc archives even when the memory limit is way beyond maxed out. To me it's exciting that I'm able to work with large data sets that don't have to be partitioned and broken up (as often) to work on, so if you're in need of low-price quality memory, I highly recommend this. If you happen to get unlucky and receive a bad module, G.Skill has you covered with their lifetime warranty. I just don't see any cons with this memory; whether for play or for work, it performs.

Cons: *However* I bought 2 of these. My MB can take up to 16GB or 4 sticks or ram. I only bought them 2 months ago. I am having issues with one of them. Ran the Microsoft Memory Utility and it says I have a problem. So now I have to take one out and run it again to see which one it is.

Overall Review: I gave this 3 eggs because newegg is the best. The product is good. But lets be honest. Nothing is going to work all the time when it comes to technology.

8 out of 8 people found this review helpful. Did you?
Manufacturer Response:
. Dear Customer We are sorry to hear one module has an issue. Please send it in for RMA and the new stick should work better. Unfortunately due to the nature of DRAM modules, random defects may occur. For this reason, all G.Skill memory packages are backed by a lifetime guarantee. If for whatever reason your memory becomes defective after a couple days, weeks, or years of use, we will exchange it with a new replacement without question. If you have any further questions or issues, please feel free to contact us directly and we will be glad to assist you. Thank you GSKILL SUPPORT Quality and customer service are our top priorities. Tech Support Email: ustech@gskillusa.com RMA Dept Email: rma@gskillusa.com G.Skill Forum: http://www.gskill.us/forum/
Anonymous
Ownership: 1 month to 1 year
Verified Owner
Adequate RAM9/23/2010 9:17:45 AM

Overall Review: I would have gone with Crucial or Corsair if my budget allowed

4 out of 4 people found this review helpful. Did you?
Manufacturer Response:
. Dear Customer Thank you for your G.Skill purchase and review. Glad to hear the memory is working fine in your system. The RipJaws is our top 4GB module series as it provides performance and capacity at an incredible value. Although the other brands are more costly, it does not mean they are better in any way. We hope you have a good experience and will become a lifetime G.Skill user. Thank you GSKILL SUPPORT Quality and customer service are our top priorities. Tech Support Email: ustech@gskillusa.com RMA Dept Email: rma@gskillusa.com G.Skill Forum: http://www.gskill.us/forum/
David T.
Ownership: 1 day to 1 week
Verified Owner
Great value4/13/2010 1:13:36 PM

Cons: Wish it was cheaper, but it sure is nice to have 4 gigs on one stick and be able to populate your i7 rig with up to 24 gigs of RAM.

Overall Review: The heatsinks look incredible. They don't look like much in the picture, and I've never been one for fancy gadget design inside a computer case, but they look pretty narly. Great design.

Pros: Works Right out of the Box with the right settings and speed didn't have to do anything in the bios.

Cons: when I bought it was cheaper to buy a couple of single sticks instead of the two packs but oh well.

Overall Review: I will definantly buy the other 2 so i can have 16 gigs of ram.