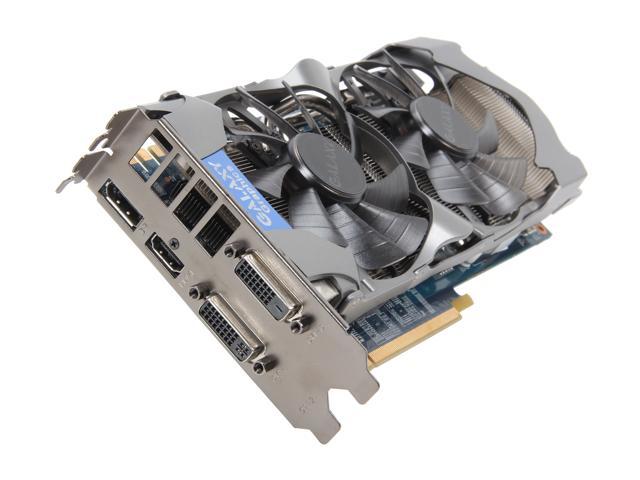 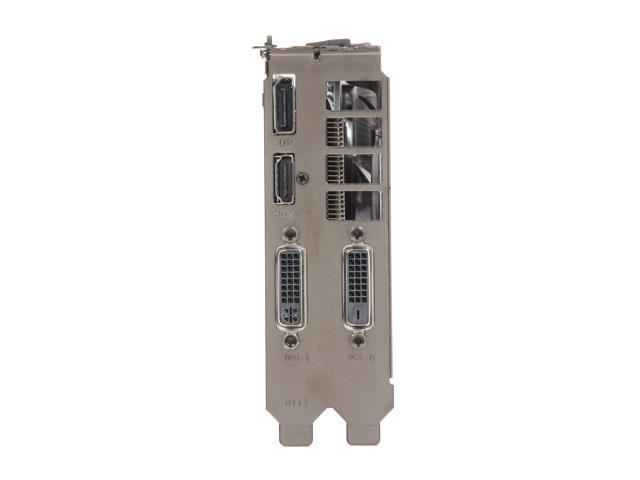 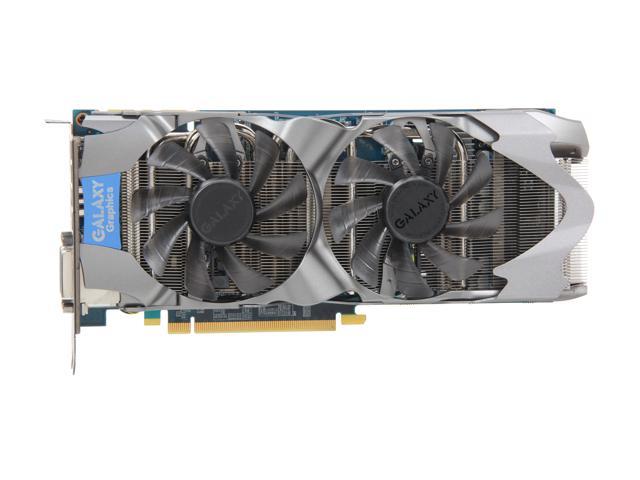 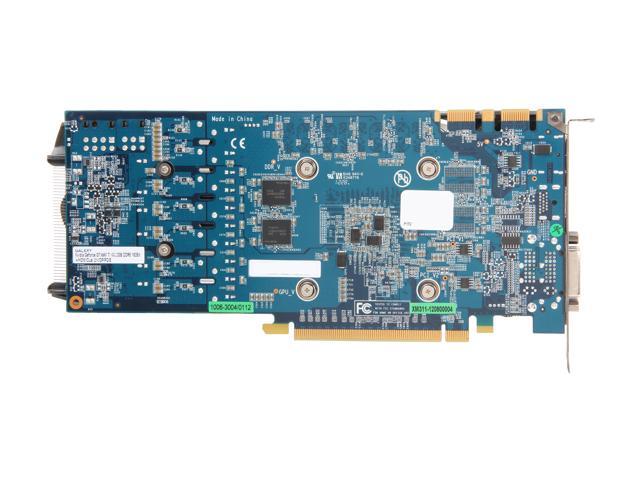 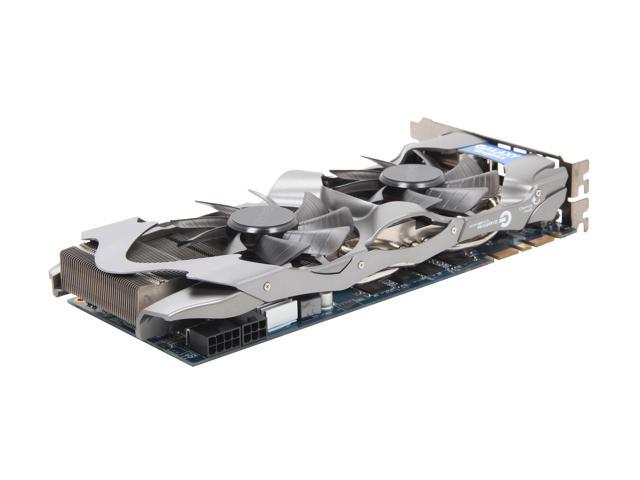 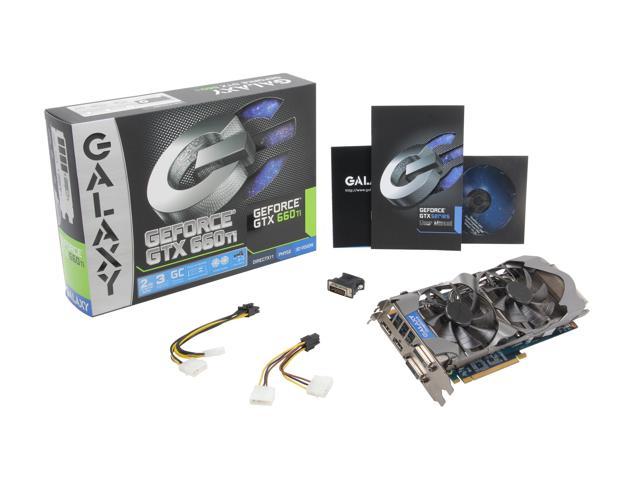 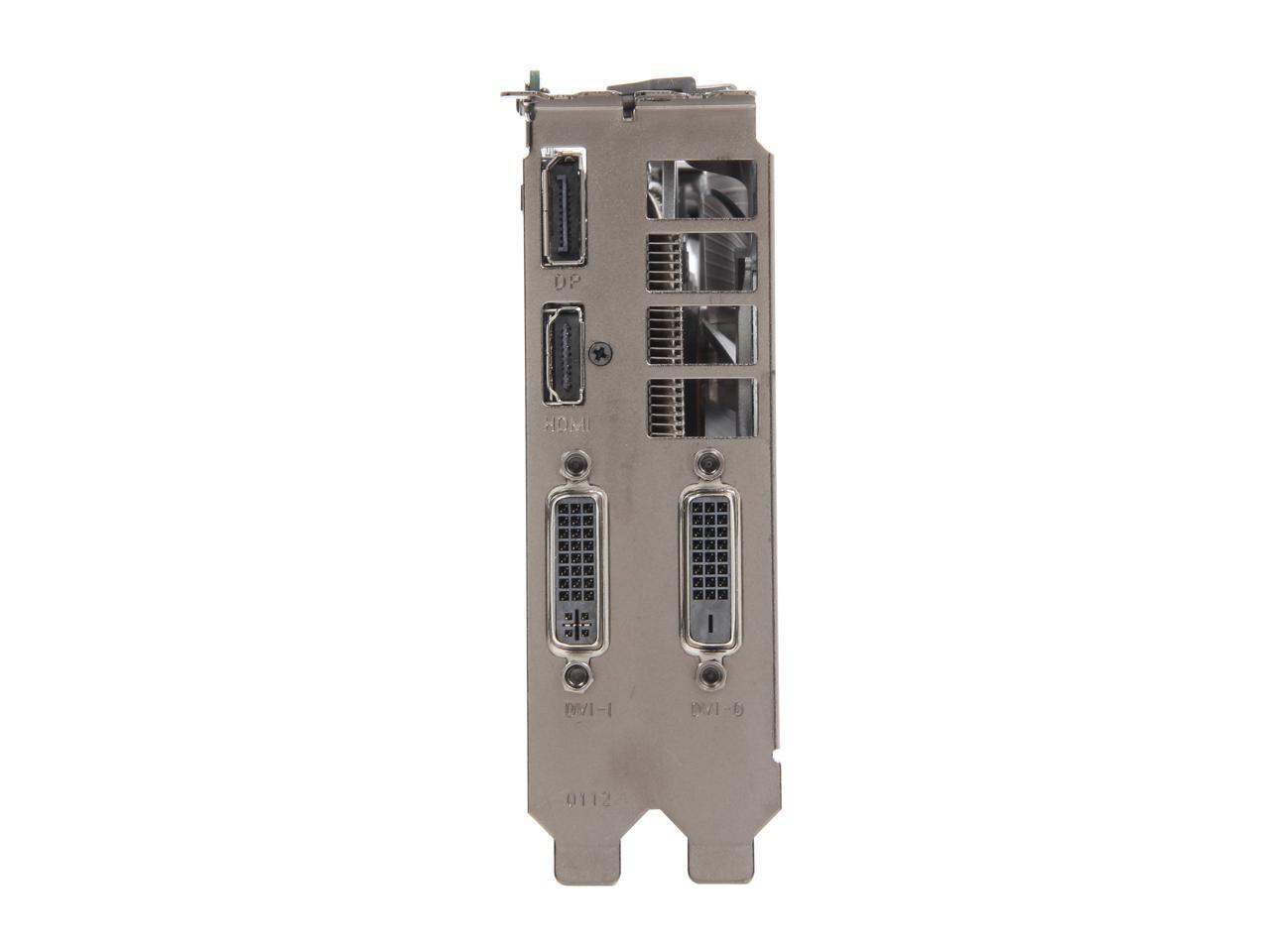 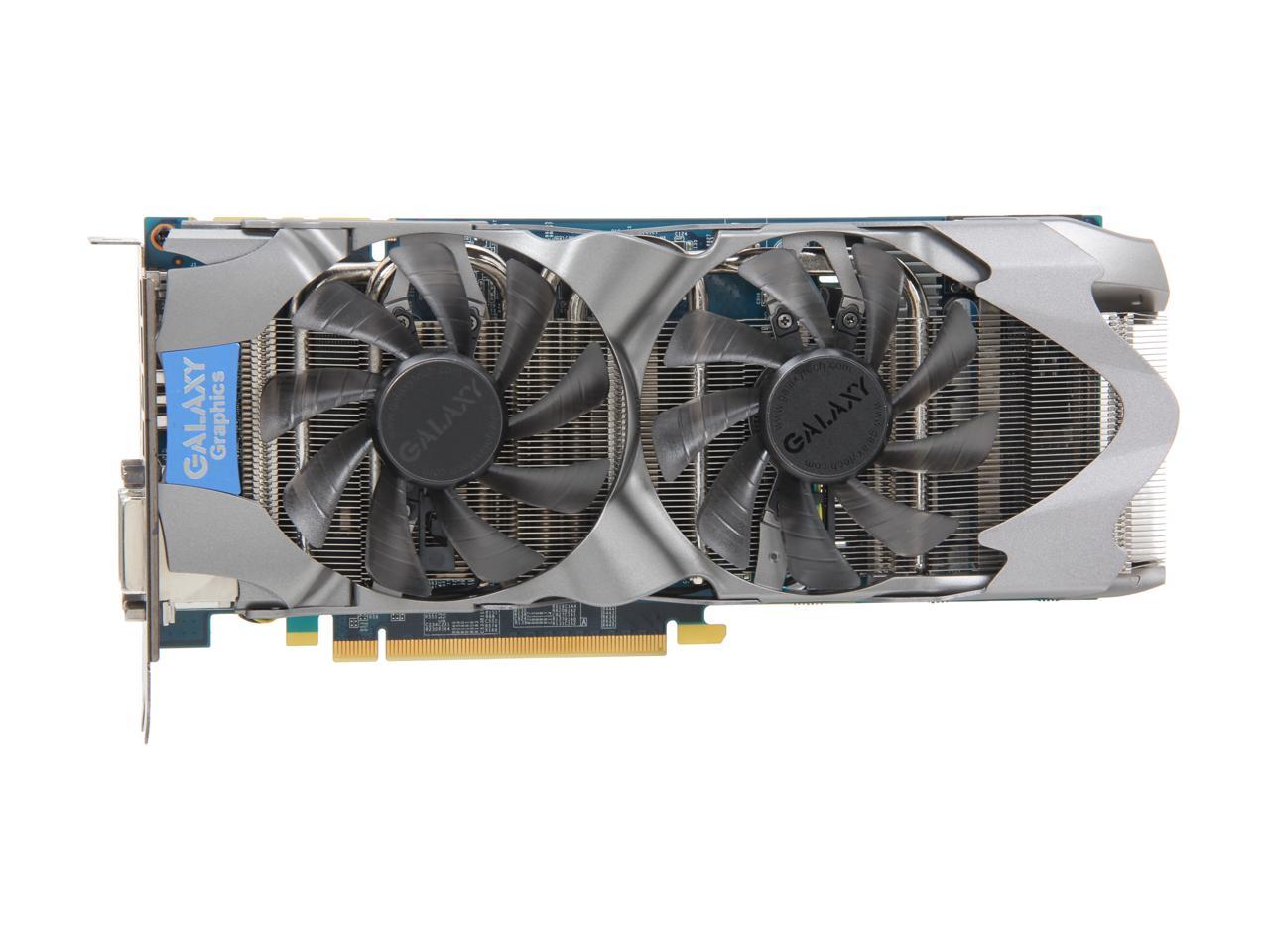 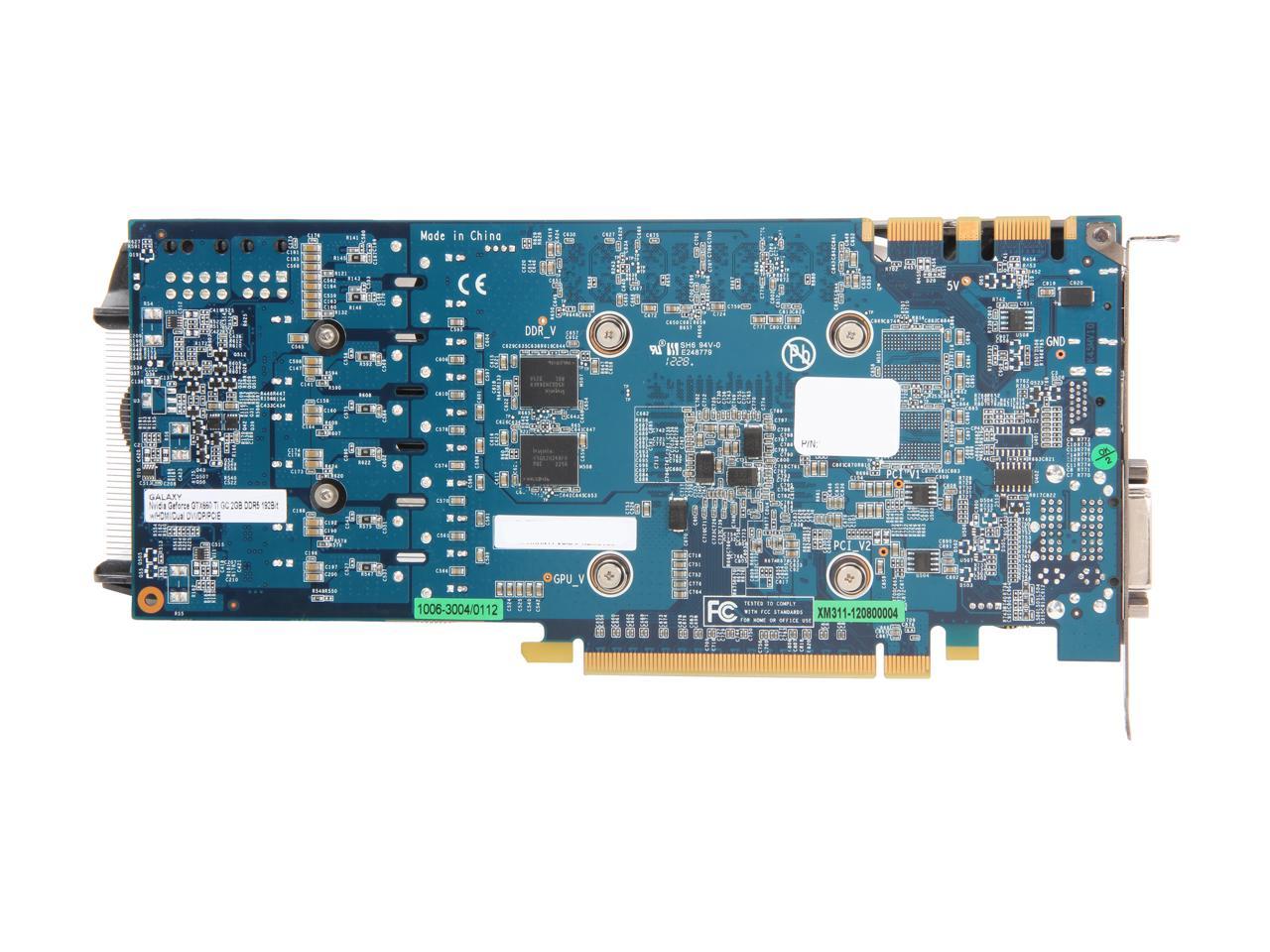 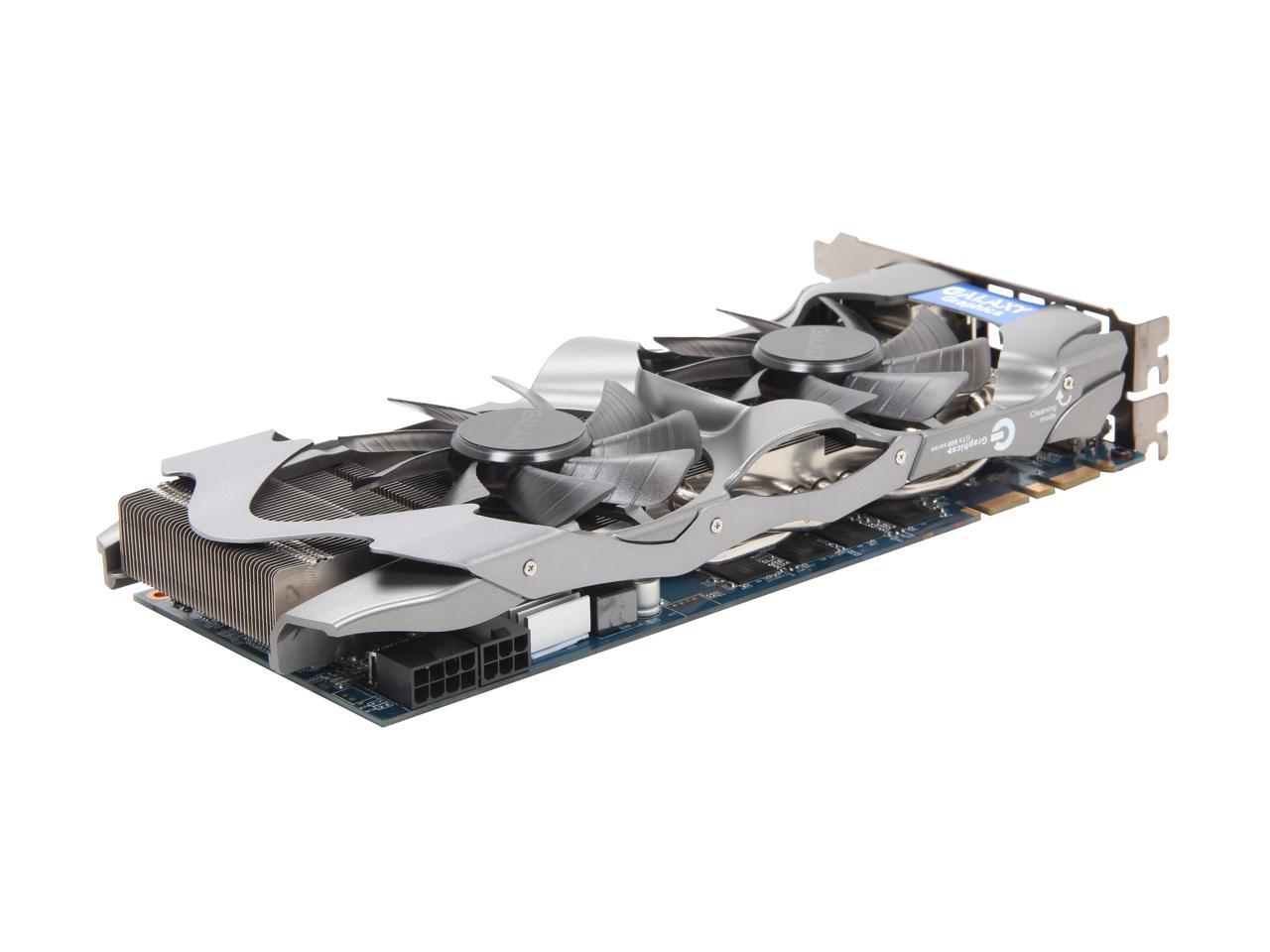 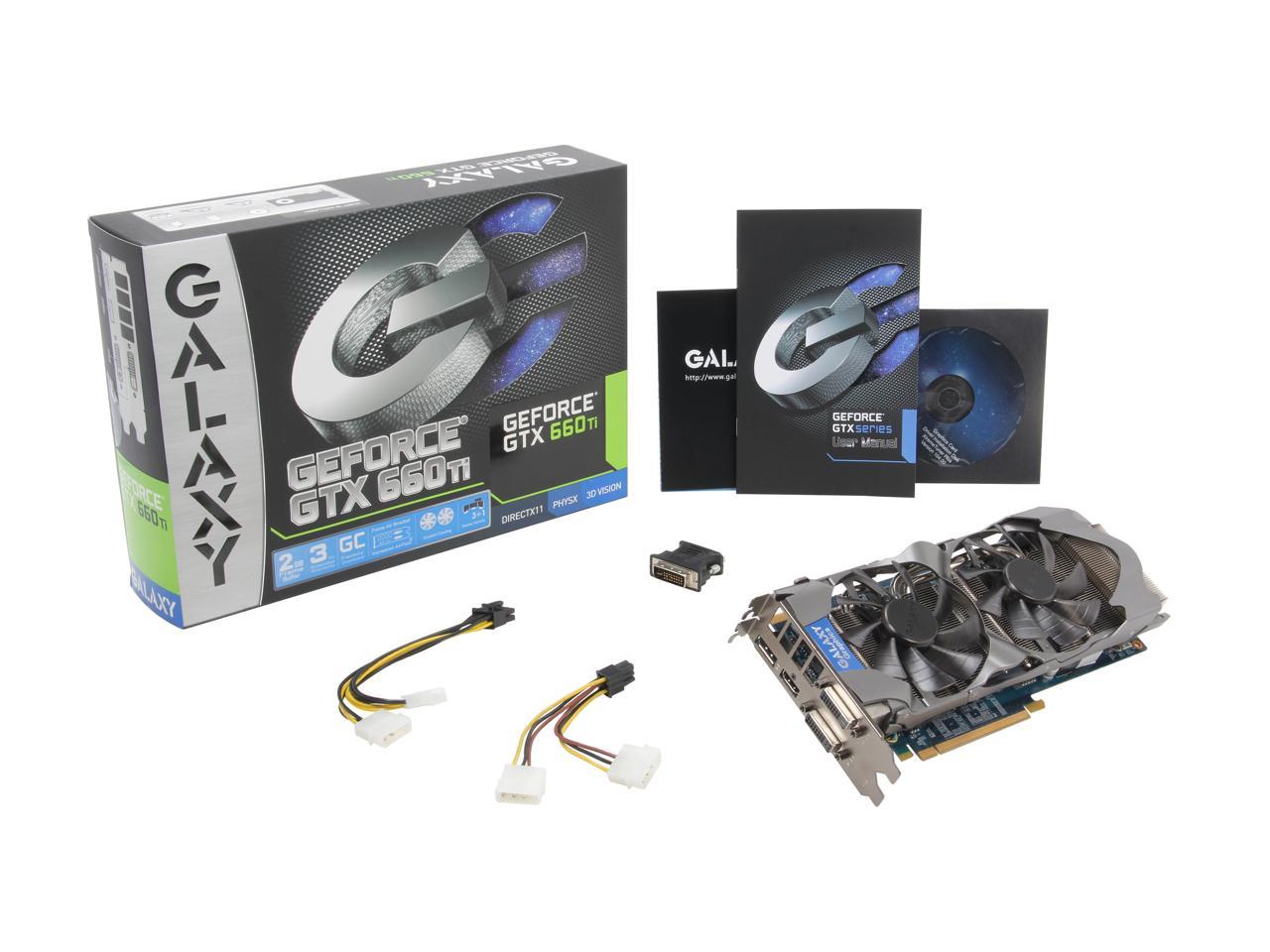 
Learn more about the Galaxy 66NPH7DV6VXZ

Pros: Runs Crysis 2 on ultra w/tessellation and high-res texture pack beautifully! Maxes out all of my games except Metro 2033. Runs very cool, my highest temperature is 61/62 degrees celsius on a warm day, most of the time it's just 60. PHYSX!

Cons: No issues of any kind!

Pros: Decent card. Handles everything I've thrown at it. Borderlands 2, Guild wars 2, planetside 2. All on highest settings at 1920x1080

Cons: first card was DOA. tech support is non-existant. never responded to my emails and trying to call goes straight to voicemail. RMA'd through new egg.

Overall Review: Its a decent card for the money. Its powerful enough to handle current gen titles and priced low enough to encourage SLI builds. Galaxy really has me worried about the long run. They offer an extended warranty if you register, but what good is that if you can't get a hold of anyone there?

Pros: - Tons of outputs - Card is fast, plenty of memory - Stays surprisingly cool even when playing new games on fairly high settings - Cooling solution is great and, as per above, is very effective - Rock solid even with an overclocked FSB - Card itself is absolutely beautiful - Works very well in linux, too! Coming from an ATI/AMD card, NVIDIA's drivers are so much better it's unreal

Overall Review: This really is a solid card. I upgraded from a crossfire setup, and this is way more efficient, faster, and more consistent.

Pros: Not sure yet

Cons: Computer ran fine with a different card - installed this and have had issues ever since. One wire on the 4-pin Molex to 8-pin adapter supplied came out almost immediately, did get it back in, but notice that rather than 4 wires going to each Molex connection, 2 sets of 2 wires are tied together so only uses 3 pins of the Molex, 3 on one and 5 on the other. Finally got it to start up, but the computer was very irratic and kept re-booting - sometimes booting right up, sometimes taking up to a half hour to boot up. Caused the whole computer to run slow. I downloaded updated drivers and installed. Just in case the issue was power related, I shut the computer down until I could replace the 600 watt power supply with a 750 watt with the correct connections so I could get rid of the adapter. Finally got the thing to run, but since installing, the computer re-starts about every 30-45 minutes. At this point, I won't buy another one. Next step seem to be, can I return it?

Overall Review: If I could resolve the shutting the computer down issue, it might be a decent card.

Manufacturer Response:
Hi Sun, Sorry you're having difficulties getting your new card working properly. Have you already contacted our support team regarding this issue? Either way I'd be happy to help troubleshoot if you'll allow me the opportunity. Could you please email me directly at andrew@galaxytechus.com and include full details about your system specs and the problems you're experiencing? Specifically, I'd like to know what version of Windows you have, your mainboard model, what graphics drivers you're using, and any other details that might provide clues to the cause of the problem. What part of boot up is taking so long to complete; posting, loading Windows, etc.? Does the PC restart when playing games, browsing the web, or just sitting at the desktop? Are there any error logs in Windows' Event Viewer that say what caused the reboot? Best, Andrew Fischer Galaxy Product Manager
Yu M.
Ownership: 1 week to 1 month
Verified Owner
Honest Review11/27/2012 3:36:48 AM

Pros: I am not gonna try to sound smart or anything and put down some honest words about this card. If you look for MIT sort of review with benchmarks then you can google. There are more than enough reviews out there for you. From me Tested on Battlefield 3, Starcraft 2, Black Ops 2, Crysis 2, Crysis Warhead, Hit-man: Absolution. This card plays all those games on ultra 1920 resolution without any lag. I am running on a i7 860 with 8 GB Ram. This card is not better than Gtx 670 but it comes close enough. Not very loud at all as i didn't notice any additional noise comparing to my old Gtx 275 by EVGA. This card is more than enough to satisfy most gamers out there. The customized fan looks really legit and the fact that you can take the card apart for easy cleaning is just fantastic in my opinion. It's a little bigger than my old GTX 275 by EVGA, although this shouldn't be a concern for full tower owners, but if you have smaller case maybe you should check out other card makers.

Cons: Wanted to take away one egg because of their bad customer service. For real, My high school friends can write a more professional email than their tech support. Their website is hard to navigate and registration, which is required for obtaining the 3 years extended warranty, is a complete disaster. But you gotta give them some credit for providing 24/ 7 customer service. My email was replied in just 3 hours. Although not very professional, I was pleased with their effort.

Overall Review: I got the card for $224 plus my favorite Assassin's Creed III game so it was a no brainer. I am not sure if you should pay anything more than 275 for this card though and if you are, just burn a lil more and get a gtx 670. If you are on a budget but also demand ultra setting in every game that's out there right now, than you can't go wrong with this card.

Pros: I used this card in my first gaming build. It is seriously an awesome card and can handle Borderlands 2 and other demanding games with ease. I haven't had any coil whine issues at all and stays around 75-80 Celsius under load in a decently ventilated case with out of the box settings. Works great with the rest of my i5-3750K.

Overall Review: I'm very pleased with this card, it plays BF3 1080p ultra @ 60 fps when locked to my monitor refresh rate (adaptive vsync) with minimums above 50 No coil whine found here including in the 45-60% fan speed range

Pros: Great card. Runs all the games I was able to put through it's paces with ease. Pretty much the same as my GTX 670 with no noticeable differences. Awesome shroud design and concept.

Cons: I had the same issue as a review below me. I am a bit sensitive to the coil whine issue as it spins up at 45-60%. Above and below that fan speed and it is nice and smooth. If you're playing taxing GPU games like BF3 the fan ramp up will be in the safe range. A game like WOW sits in the whine range.

Overall Review: Good card. If you're not sensitive to coil whine then have at it. So giving it 3 stars since I am returning it and looking at another brand.