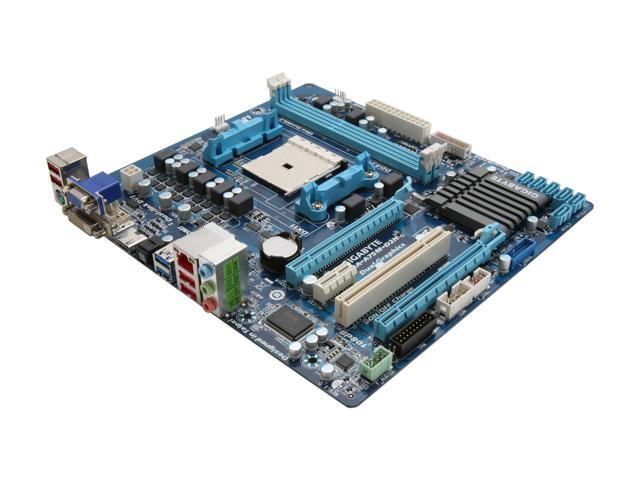 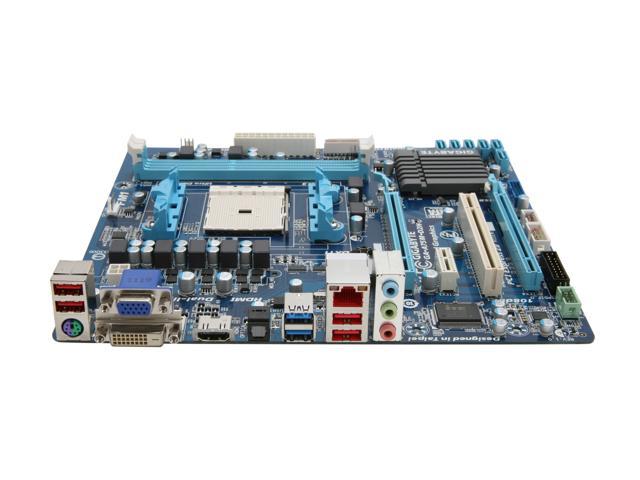 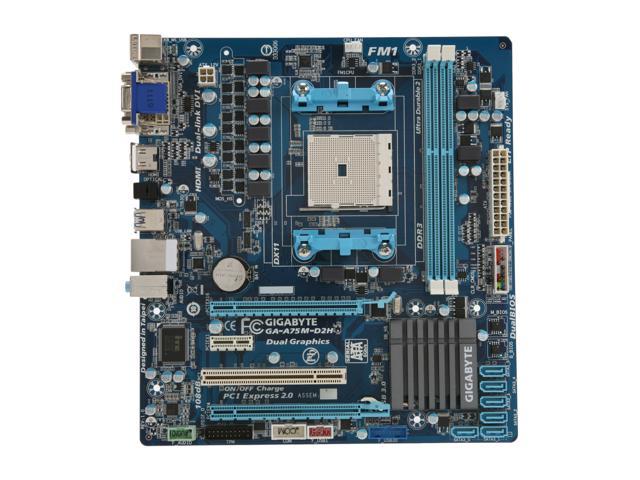 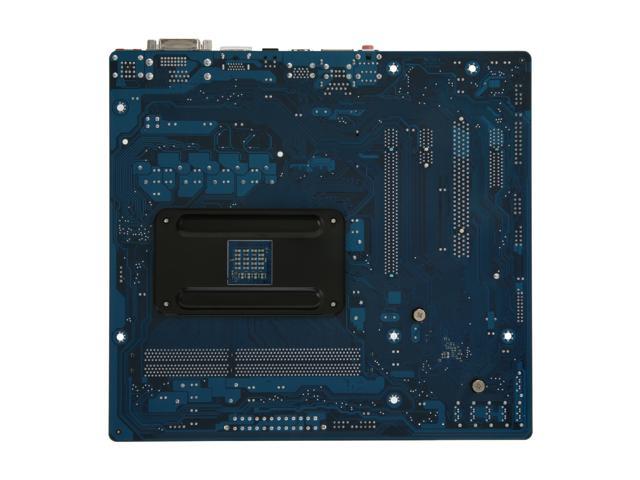 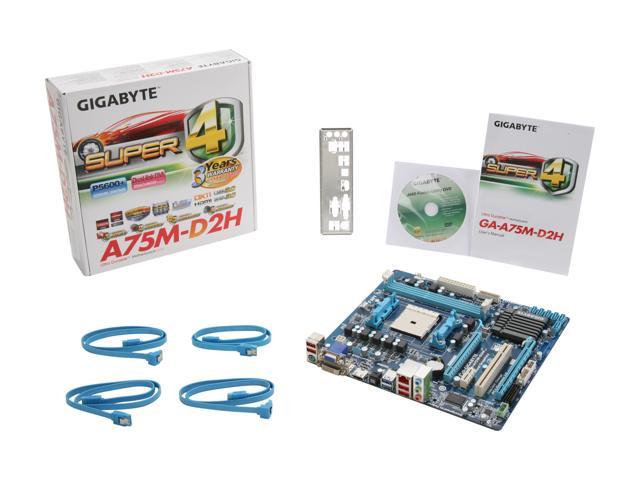 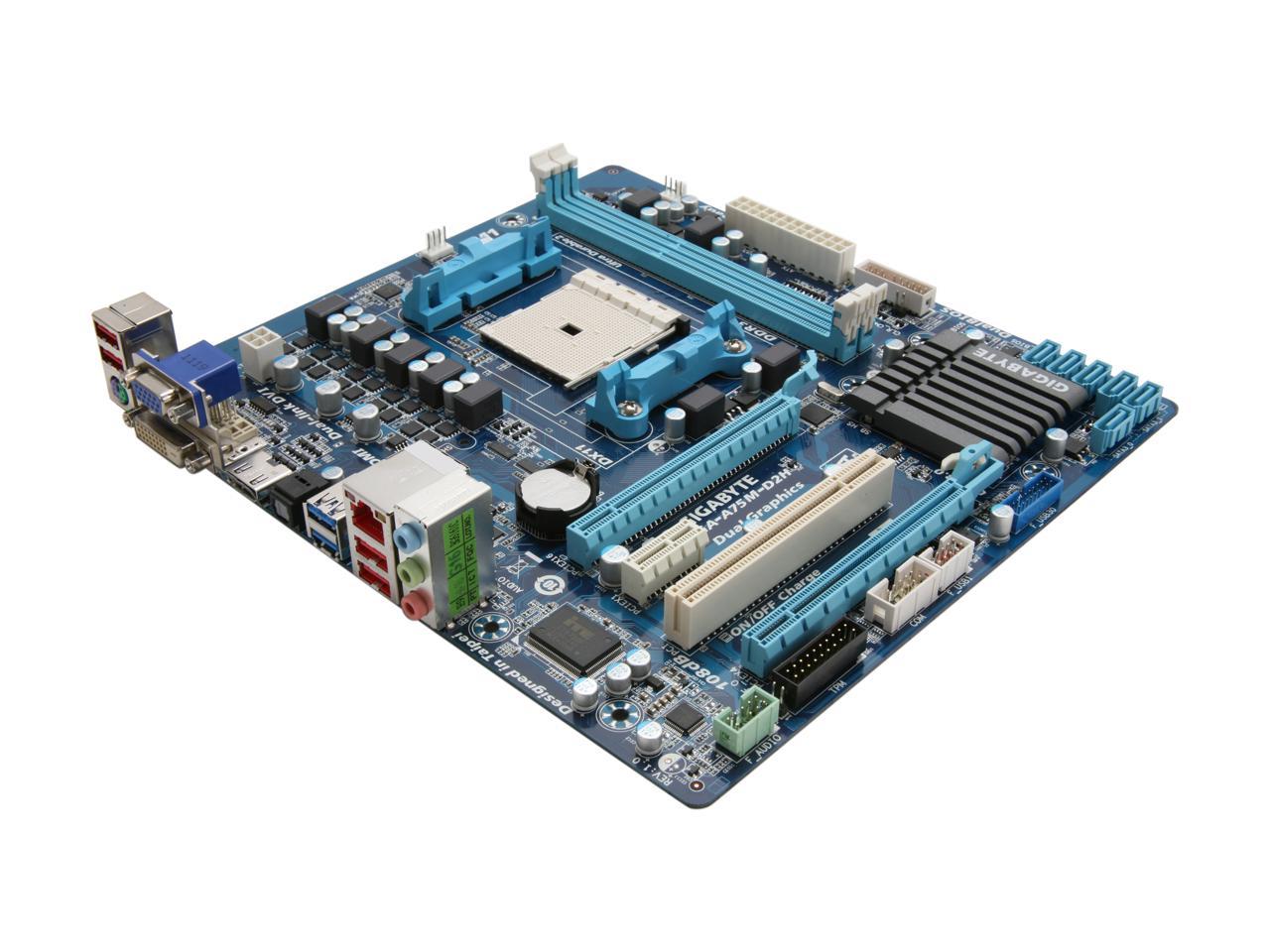 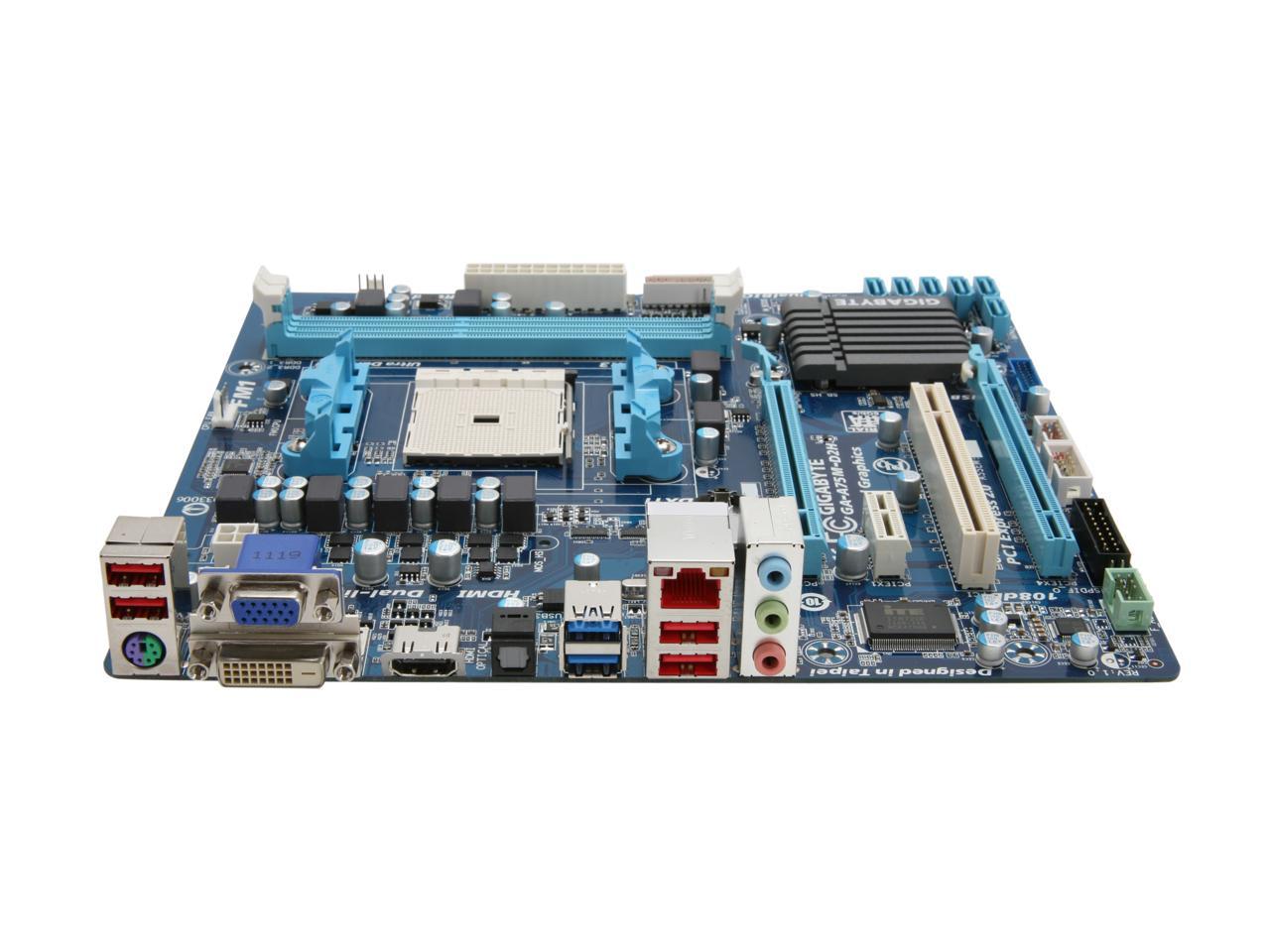 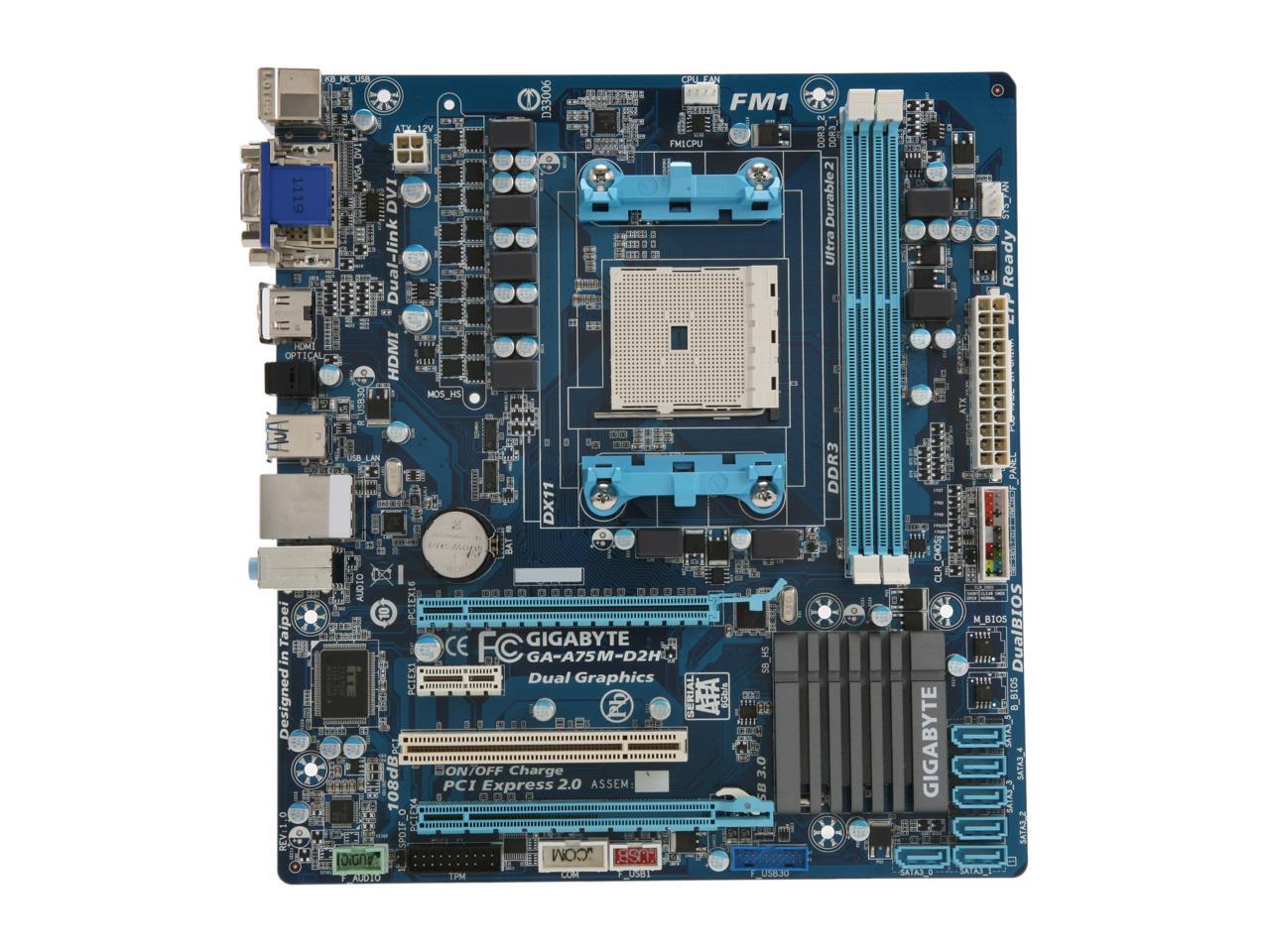 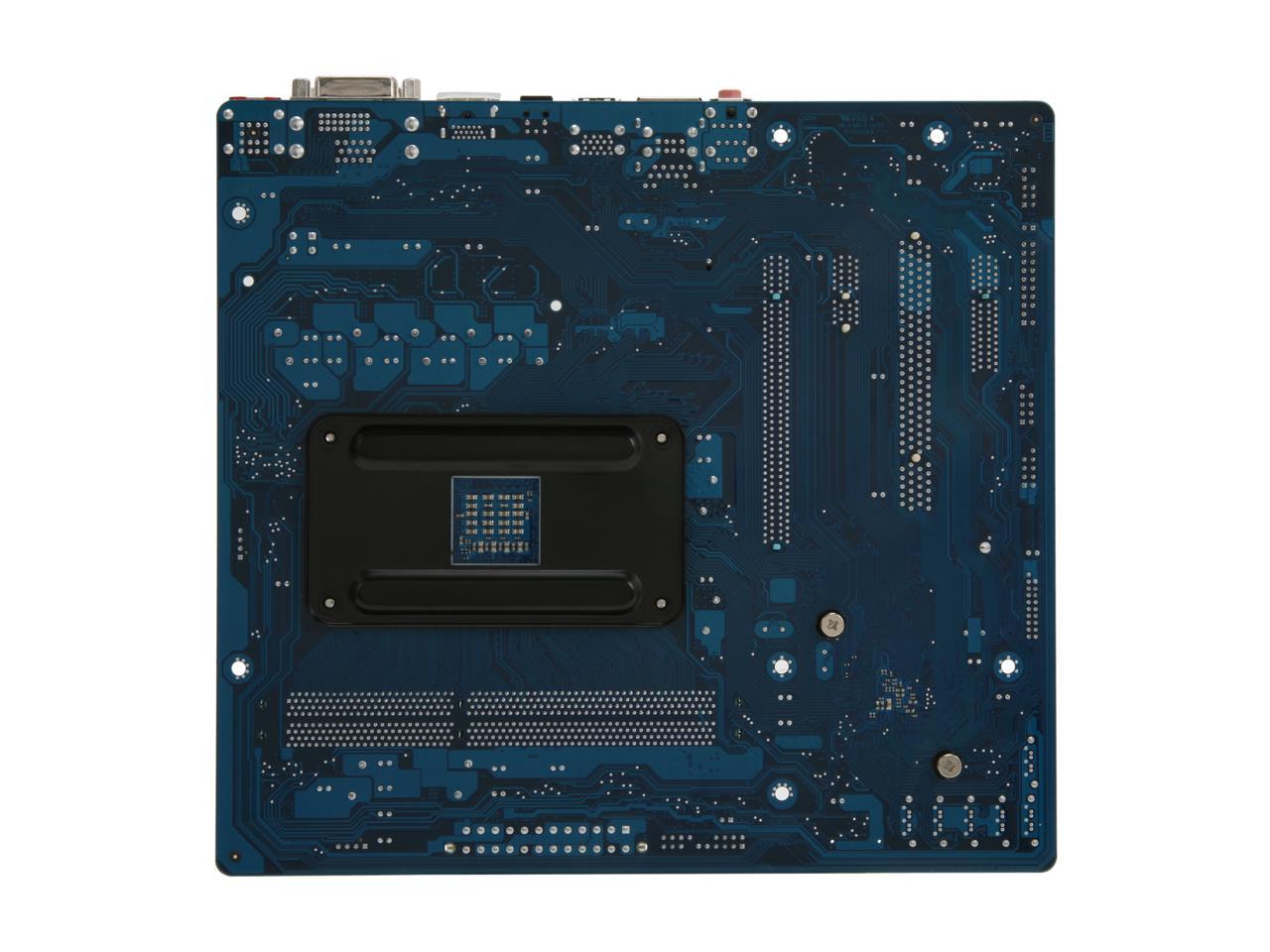 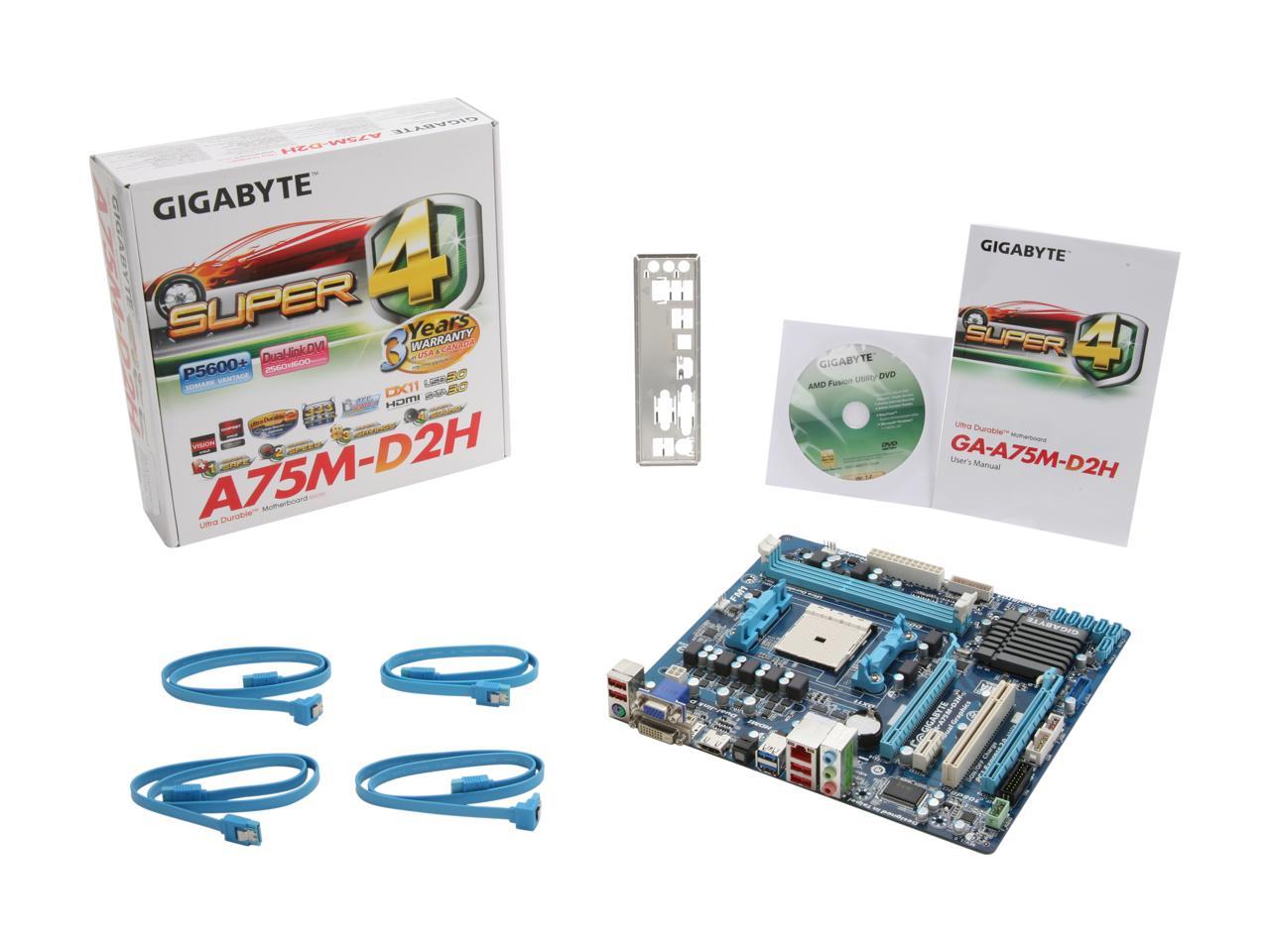 Learn more about the GIGABYTE GA-A75M-D2H

Pros: Six SATA III 6Gb/sec ports Four USB 3.0 ports (2 external + 2 internal) Most people will never need 6 SATA III ports, but it's nice that the option is available for those who can use them.

Cons: no eSATA only 2 onboard fan headers

Overall Review: Gone are the days of one socket lasting multiple generations of processors :-( When I bought this board, I had hoped I would be able to upgrade once the A10 APUs came out, no such luck. Would liked to have seen a 3rd fan header I knocked off one egg only because of the lack of eSATA which IMO should be manditory.

Pros: -An A75 board that actually works with HDMI with latest BIOS -An A75 board where USB 3.0 actually operates as 3.0 -SATA 6Gbps with plenty of ports and no right angles -Full featured BIOS options -Great Memory support -Many Overclocking features

Cons: -Only 2 Memmory DIMMs -No PATA slots -Only 1 PCI slot -The dual PCI-e x16 slots are in x16/x4 configuration -Does not overclock well in AHCI or RAID mode (an A75 chipset limitation) Early BIOS update bricked the motherboard. I went through two GA-A75M-D2H's because of this. After the first, I made sure to confirm checksums and everything. It didn't make a difference. Prior to the latest BIOS version, it would not recognize my HDTV as a primary display via HDMI. This is actually a problem with the A75 chipset in general. The latest BIOS seem to have fixed that problem, but it was still very difficult to get it to work with HDMI. It was a matter of plugging in/unplugging D-sub and HDMI and DVI cables and fiddling with DVI-to-HDMI converters. I'm not exactly sure what it was that fixed it, but the HDMI port now works perfectly with my TV.

Overall Review: The first GA-A75m-D2H board I had would not recognize my HDTV as a primary display (a problem with the A75 chipset). Updating to the newest BIOS at the time bricked the board. I exchanged it for a new board. This one also did not recognize my HDTV. I redownloaded, confirmed checksums, and flashed the latest BIOS again. Bricked the board. After that I switch to the F1A75-m. It also did not recognize my HDTV via HDMI, but at least its BIOS updates didn't brick it. During an upgrade, I decided to give the GA-A75m-D2H another try, and I am EXTREMELY happy that I did. Compared to the F1A75-m, this one has better Ethernet and sound chipsets, working USB 3.0, and actually works with my TV via HDMI. Bottom line: if you want to build an HTPC using the A75 chipset, this motherboard is your best bet on getting HDMI to work properly.

Pros: Great board, easy set up!

Cons: Worked great for my HTPC build for about 3 days. Paired with AMD A6-3650 Llano 2.6GHz - Amazing while it worked! VGA DVI and HDMI all stopped working, tried everything, bios reset, cmos reset, dif power supply, dif ram, reseated CPU and all cable connections. No idea wat went wrong. Contacted newegg, getting RMA, hope the next one works better.

Overall Review: Great board for the price and size if thats what you need. Sata III and USB 3 and AMD APU. Have owned many gigabyte boards, first one to go bad on me. First MOBO to go bad within 3 days of set up and use.

Pros: Installed all the drivers with no issues, the BIOS is wonderfully easy to configure adjusting RAM frequencys and adjusting a better access time for purely SATA based components. The manufacturers 4 year warranty is somewhat re-assuring. USB 3.0 is very nice, however I haven't had any USB 3.0 components to fully use their capabilities. 2.0 is still fine for me at the moment. It was also great to see this came with 4 SATA connectors or else I would have been in trouble. 6 Gb/s is very nice as I have a Hard drive that corresponds with this standard. :D

Cons: The VGA port is a little wacky whenever I play EVE Online, for whatever reason EVE and my VGA display adapter don't get along well whenever I minimize the game. I get a Resolution Display error telling me that my display port isn't configured for the type of resolution I'm running. Which is funny because it's on a 1024x768 PnP monitor and EVE doesn't allow a lower resolution. That resolution works fine on all my other games except EVE. Sometimes my Monitor's display will turn off and not turn back on until I Ctrl + Alt + Del and the game will still be running in the back ground. Sometimes the game will crash and I still will get the warning with the display functioning perfectly normal. Sometime I get the warning and nothing happens. Makes me question the DVI and HDMI capabilities of this board.

Overall Review: I didn't want to mess around with overclocking my CPU from fear of no experience and not knowing enough to fidget with a first time build. If it isn't broken don't fix it. I decided to save money by choosing a smaller form factor and a smaller board overall, as you can see this one has 2 DIMM slots, which was really all I needed or wanted. So I have 2 4 GB strips of DDR3 @ 1866. I do not regret this purchase, its a great starting board for a first time build. Unless you really need 4 DIMMs for that 16 GBs of RAM.

Pros: easy set up and every thing works .

Cons: the auto driver install dinn't work right ( using xp) hard to insall drivers individualy. but I finaly got it.

Overall Review: I like the bios adjustments very easy to use. just simply swithched the memory voltage from 1.5 to 1.65 to match recomended voltage for the ram that i purchased for it.

Cons: Had one dead out the box, had new-egg send me another, with the expense of a flippen $15 box, only to receive another dead one. Never had such a bad experience with products till now.

Overall Review: i didn't even want to give it a 1 star review,..

1 out of 1 people found this review helpful. Did you?
Manufacturer Response:
Dear Customer, Thank you for your comments. We apologize for your difficulty with your Gigabyte product. Please contact us at newegg-support@gigabyteusa.com with the case number 86066 in the subject line. We will provide personalized service and analysis to help solve your issue ASAP. If the matter is urgent, please send us your contact number, and we will contact you. Gigabyte VIP Support Team
Anonymous
Ownership: 1 day to 1 week
Verified Owner
Good Overall5/12/2012 3:16:06 PM

Cons: Only one system fan post. To put in a front fan would require molex added to PSU, with more clutter. Something I overlooked in my reading and looking at specs and pictures. Would not have stopped me anway. Biggest negative is this and my other new Gigabyte board do not support a blinking power LED when in S3 sleep. Someting I really like for Win 7.

Overall Review: I'd recommend this board to anyone wanting to build an average Llano system inexpensively.