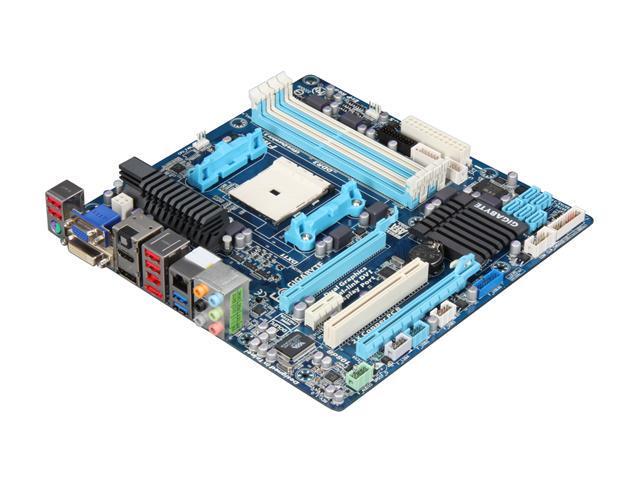 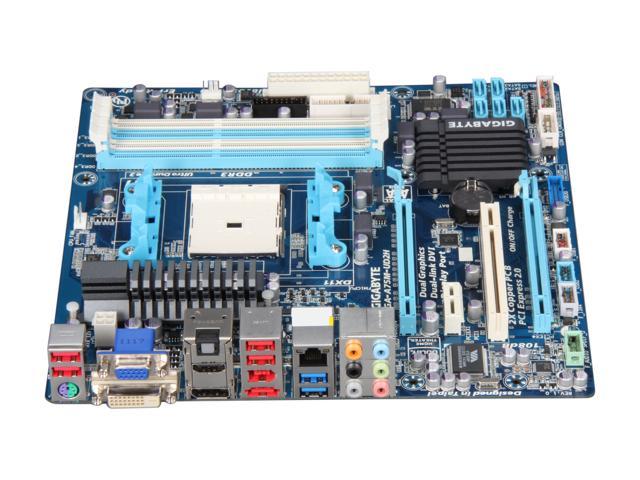 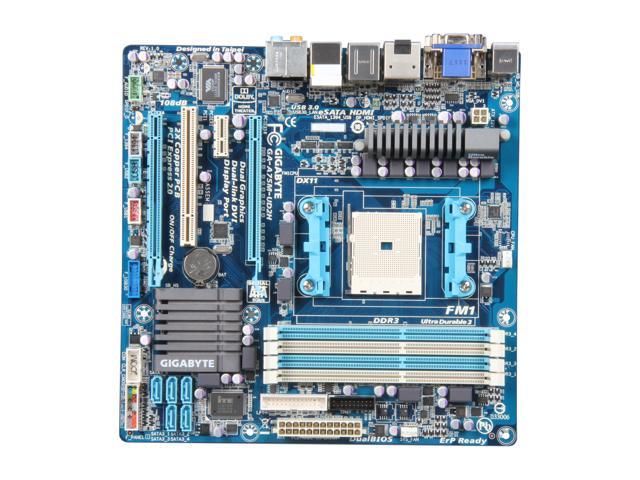 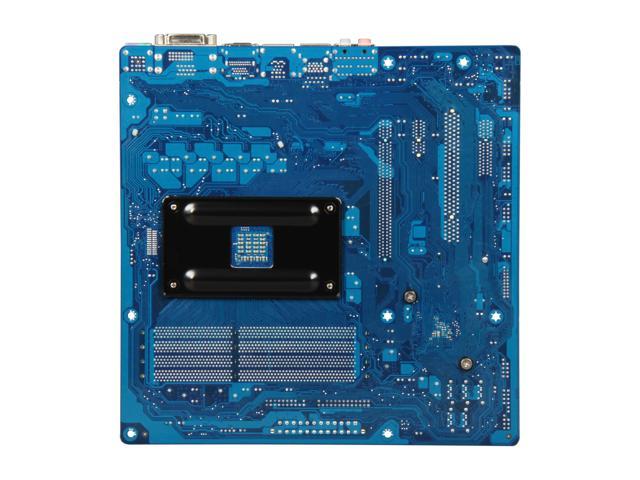 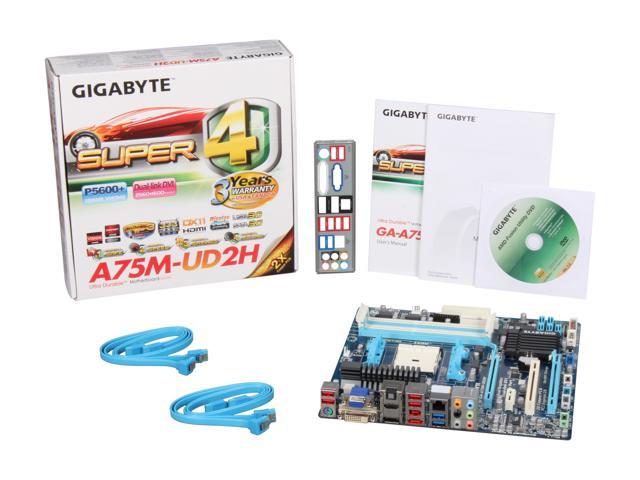 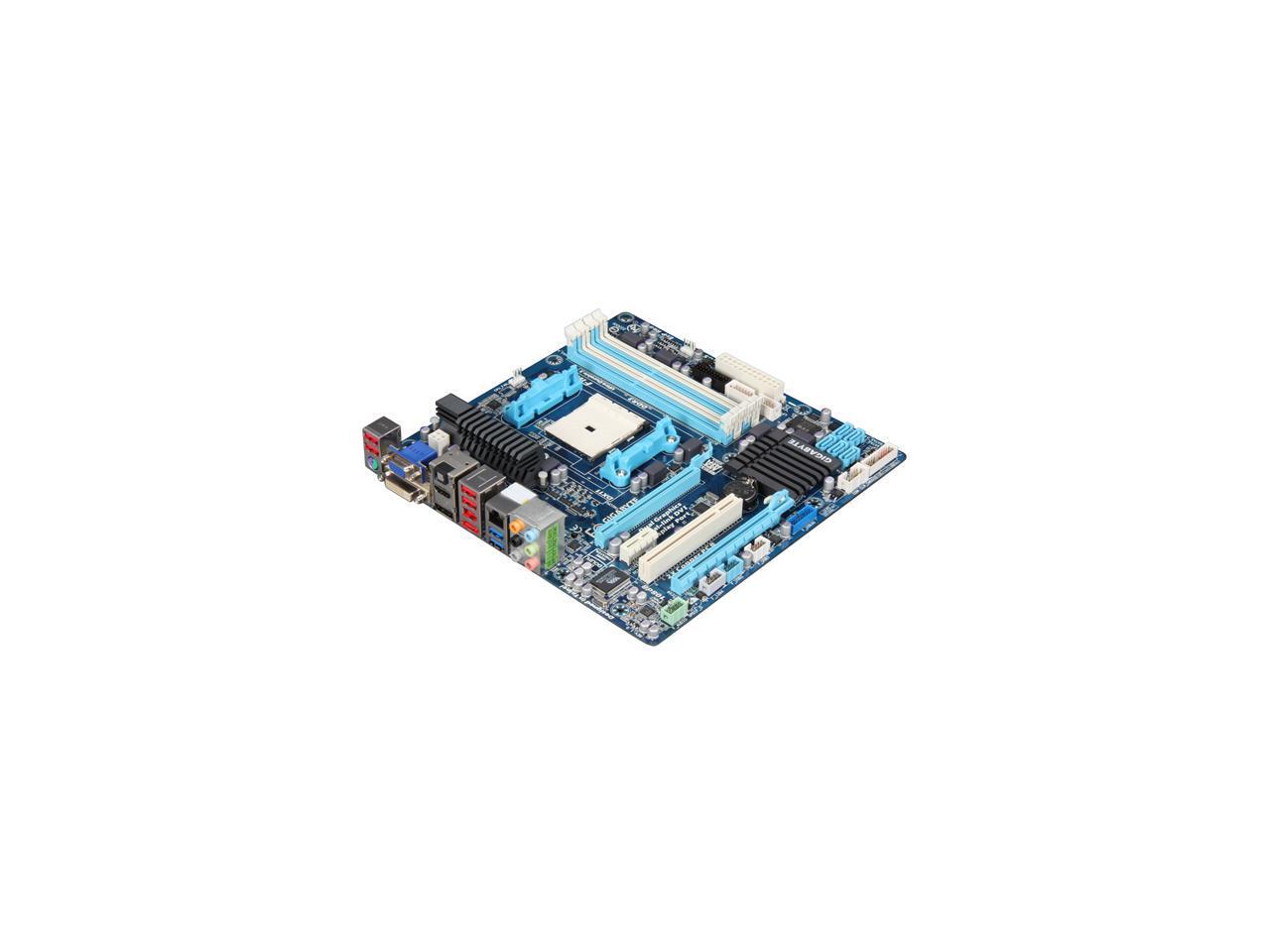 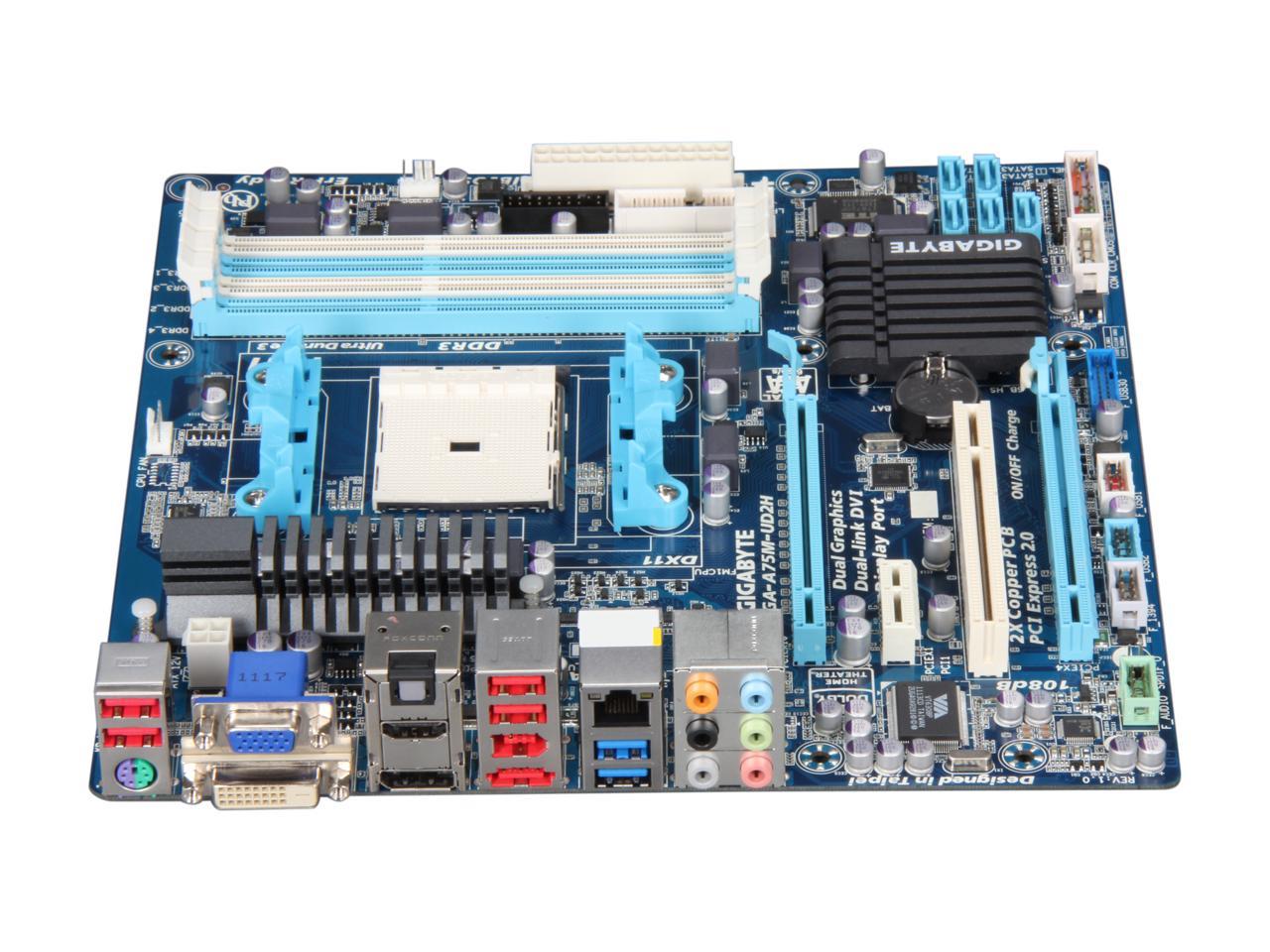 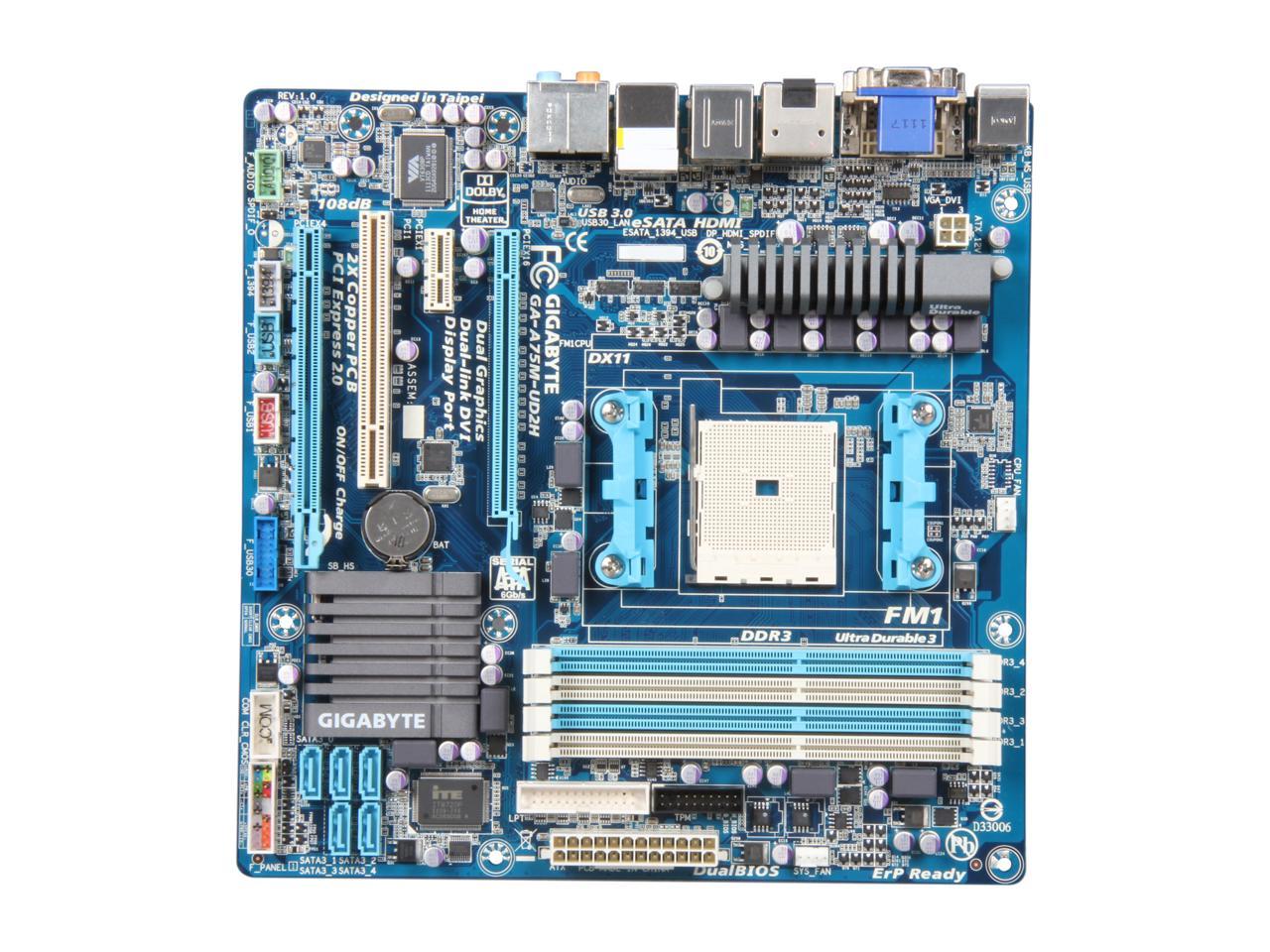 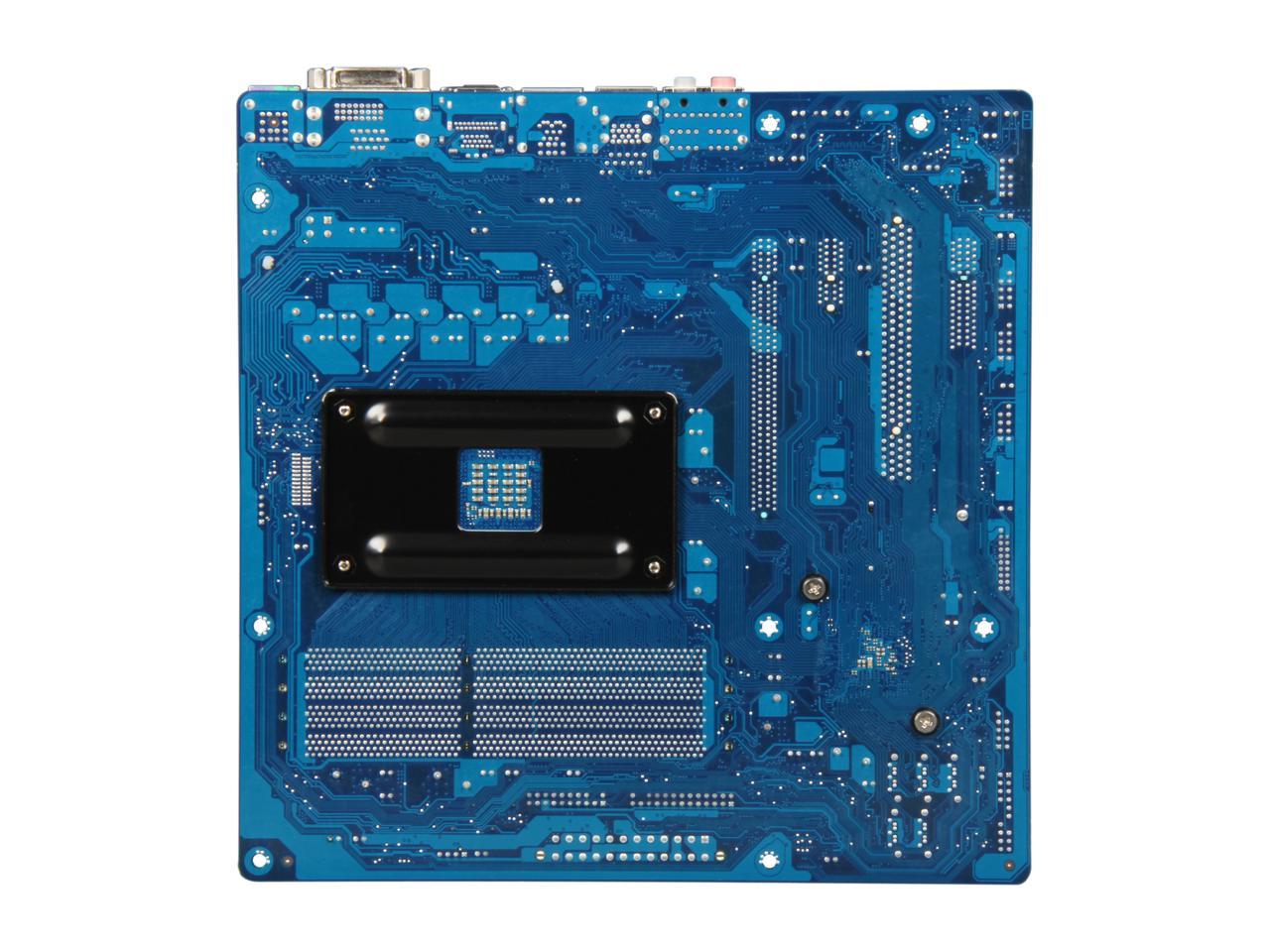 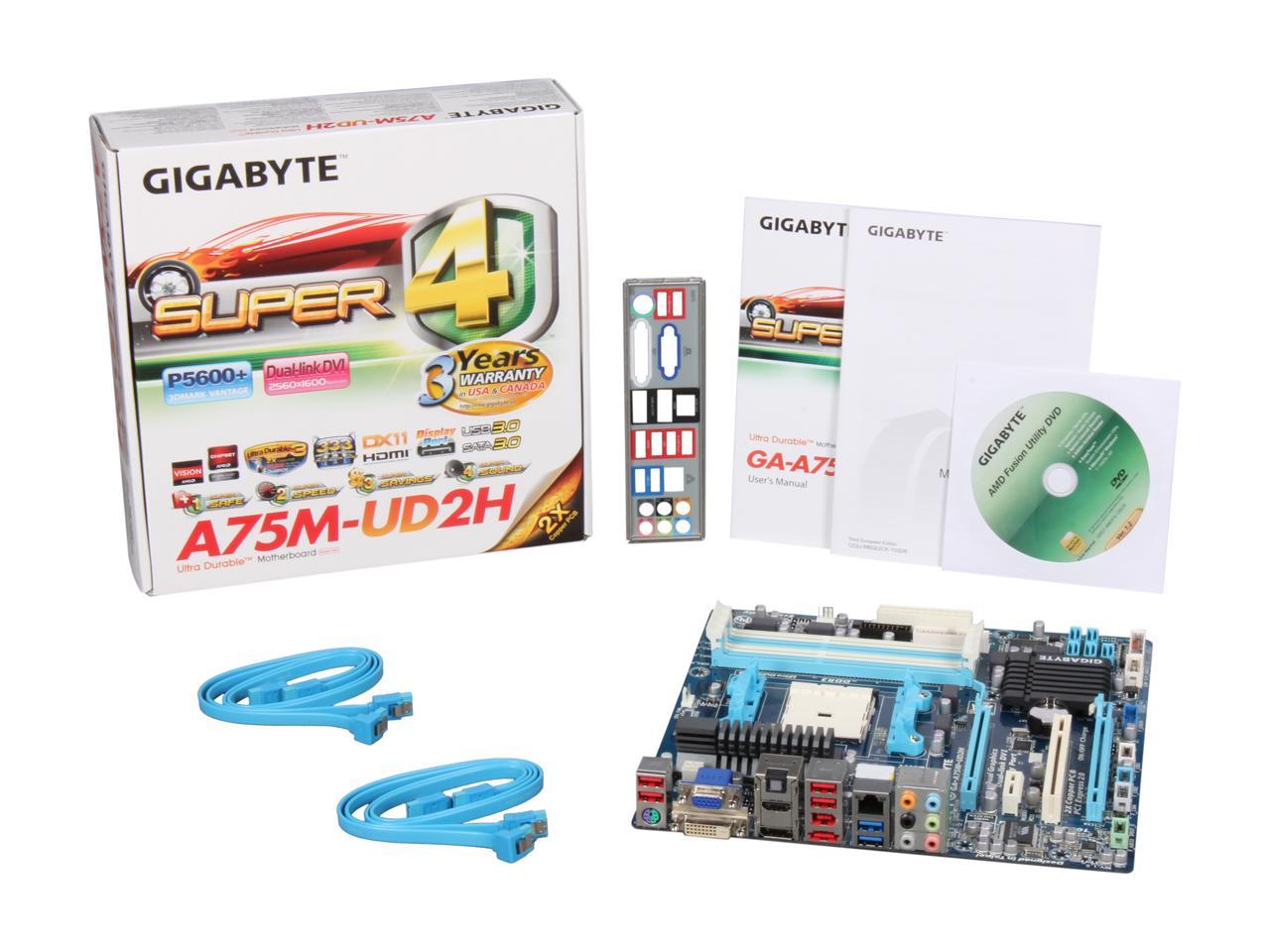 (41) Write a Review
OUT OF STOCK.
Specs
Reviews

Learn more about the GIGABYTE GA-A75M-UD2H

Pros: -Paired with A8-3850 is a 1080p gaming monster :) -Feature-rich board -Happily runs 16GB memory at 1600mhz -NO squealing capacitors etc -OC friendly BIOS -Easy BIOS flashes -Affordable price -New F4 bios adds further features -Compatible with AM2 and newer heatsinks -For OC: disable USB3, change from ACHI to IDE mode, then crank your FSB straight up to 134mhz, drop your multiplier down. Check your memory speed as memory throughput is more important than GPU speed. You should be able to end up with around 3.5ghz and an 800mhz cpu with the right voltages. This thing flies!

Cons: -Southbridge gets HOT, but Hudson Chipset is apparently temp-friendly when it comes to high heat. -NEED to set memory timings manually -Temp sensors seem screwy (CPU issue, actually) -FM1 is a dead-end socket, FM2 is right around the corner

Overall Review: MEMORY SETTINGS: Guys, the BIOS does not recognize XMP memory profiles, just SPD profiles. That means you'll have to set it yourself. My Corsair Vengeance 1.5v 1600mhz 4x4gb setup runs flawlessly only after setting it up properly. First off, boot windows and run CPU-Z, select the SPD tab and write down the timings. Reboot, enter BIOS, select your memory timings manually!! Nothing should be "auto". Double check and make sure you also set it at "2T" command rate unless you're an advanced user and know it should run at 1T. That should fix you right up. Also, the CPU does NOT support 4 dimms beyond 1600mhz, so don't expect to run higher if you have 4 dimms of memory. Optional: Up VDIMM +0.05v to ensure you're 4 dimms are properly powered. 1.55v should be enough. HIGH TEMP SOUTHRBIDGE: This things gets HOT, which is OK as Hudson good for 95c. It doesn't take much airflow to cool it, but does need SOME airflow. Put an old CPU fan against it and plug it into the sys-fan port.

Pros: I got it to work with DVI and HDMI. Super quite setup. Extra nice features on the board. Fast! Still the best bang for the buck board out there on paper (in my opinion), but please read on.

Cons: I got the board working. It turns out for some freakish reason the two monitors I tried are NOT compatible with this board via HDMI or DVI. Even though they are both 720p capable and/or 1680x1050. I purchased a new monitor that does 1080p and the outputs worked! I'm not sure if this is a minimum resolution problem with AMD/ATI or with this actual board manufactured by Gigabyte. This setup is fairly new so I'm sure others will experience this or similar issues. I feel bad for giving it a bad review at first but at the same time I feel it was justified. Gigabyte did eventually email me back but well over the 24hour period they state on their site (3 days later actually). Sadly however, the email did absolutely nothing. It seemed like they literally copied and pasted off the manual that I read over and over again even though my email clearly specified several things I did to try and make this board work.

Overall Review: The monitors in question are a Samsung 225MS. The other was an LG LCD TV (no model number at the moment) . Both a bit old but it shouldn't matter I think. I've connected new equipment to both. Keep in mind the incompatibility of these two monitors is being determined by me and that D-Sub VGA did work on both. Moreover, there are no FAQ's or information somewhere telling you that there are minimum resolution requirements or monitors/monitor style that will not work with this platform or this motherboard in particular for that matter. Another thing is I was perhaps a bit fumed so to speak. I did NOT end up sending the whole setup back, thought I'd give it one last chance. That and I kinda needed a new monitor anyway. I guess if I didn't have those other two monitors and had my brand new 1080p monitor waiting for it then I would of never known of these issues and easily would of given this board 5 EGGS! Interesting when I see it that way. More than anything I hope this helps others

Pros: Looks like quality components compared to the bargain mobos I've bought before. Everything works fine. Included EasyTune software lets you test overclocking easily without saving to BIOS and rebooting.

Cons: You need some knowledge to overclock successfully... it has all the controls, but there's no "easy mode". To get the DDR3-1600 memory to run at 1600 and not 1333 I had to manually enter timings (used CPU-Z to read them from module). Used 8x multiplier 9-9-9-27 and 36 tRC. Crashed after a while, raised voltage a bit (SPD said 1.65v for that speed for these modules but didn't go that high) and haven't had any problems since. Not an overclocking expert so may not be correct info, in the past the mobos I've had did this automatically.

Overall Review: The heatsink on A75 chipset gets pretty hot to the touch, but is only 8w so probably fine with no fan. Be sure to update BIOS. The F12 boot menu is not very good... still haven't figured out how to boot from a USB flash drive... can boot from usb-cdrom though.

Pros: Simple to install. I used the A8-3780k with this board. Go to Gigabytes website and there is a touch bios app for windows 7. Dual boot configuration with windows 7 and Linux Mint. I have also tried Ubuntu Linux as well, works fine. I have had all work with a little playing with the settings. You have to install the gigabyte drivers in Windows 7 to get all the functions to work correctly. ie usb 3, network card etc. In Linux mint use the stock gallium video drivers, I did not have success with the additional amd drivers. Also I had better network speed when I installed the Realtek Linux network drivers from their website. Yes you can have video problems on install in linux if you don't use the correct port on the video card. With the dsub port I had no video partway into the install, but no problems with the DVI. I am running dual monitors and use the DVI & HDMI ports.

Pros: Tons of connectivity.. Not sure if I've seen another FM1 microatx board that has this amount of connectivity. Overclockability, I've gone to above 140 base clock on this board and it has run fine. Others seem like they are having issues with some video connections and suspend, or other weird issues that most would just expect to work. I'm using DVI at the moment so cannot comment, but Gigabyte seems to update BIOS regularly and if there IS a common problem I would like to think they would resolve it.

Pros: well laid out, has a usb 3.0 header for additional usb 3. came with 4 sata 6 cables installed easily worked right out of the box

Cons: the hub controller is hot to touch gigabytes software says it is running at 45 C. CPU only at 35 C may need to add a side fan to blow right on it.

Overall Review: overall very happy with the board and llano in general.

Pros: People who are on here and complain about memory speed support don't know what they are talking about for one. None of the FM1 board support any memory faster than 1333MHz. You have to overclock the memory on EVERY single board. The memory controller is on the CPU and has nothing to do with the motherboard. So you people need to get your facts straight before giving a product a trash review that has nothing to do with the board itself. You can easily overclock the gigabyte and asus board to 1600 and 1866 speeds and even push it past those. I've had 3 of these boards so far. They have all worked well, but stay away from G.Skill memory with this board. Go to Corsair. I've had problems with G.Skill and the FM1 platform. This board is my choice for the mATX form factor, and I use the Asus F1A75-V PRO for my ATX form factor builds. Both are very good.

Overall Review: Also this board does work with Linux. I've had Ubuntu installed on this board 10.04/10.10/11.04, the only version I've not been able to install so far was 11.10. Also make sure you have a non-LED monitor if you are running Linux. Support for them sucks. This is a Linux development issue and not the fault of this board. I've also had 2 of these boards on dual video. You have to read the manual to get it configured properly. It will only work in certain configurations. But following the instructions I had no problem with two of these boards. I did not test the third one, it had to go out my door too quick.

Cons: PCI e slots unable to crossfire which after much reading found out that was the thing with these apu boards. Only made for crossfiring with the APU graphic chips. Gigabyte customer and RMA service is absolutely terrible (see other thoughts)

Overall Review: Motherboard died just before warranty expired. Fans would spin the case light would light up and the light on my Blu-ray drive would flash several times but wouldn't post and no video. Since it was before warranty period ended sent it back for RMA work. Board was sent back saying everything was fine. Due to a bout with pneumonia and surgery only got to test a couple months after receiving it back. Lo and behold same issue. Had tested each other component in other systems as well as getting another cpu to test and the components were fine in the other systems but with this motherboard the issue was there. After several months and emails with no response finally wrote requesting to escalate the issue. Finally got a response and after retesting the system to confirm the issue was still there was told create another RMA and Gigabyte would make a return shipping label. Opened the 2nd RMA to be told that I'd have to once again pay shipping. Contacted the person who told me I wouldn't have to pay and they changed their response and said that I would indeed be liable for the shipping charge. They claimed that this was due to the board being outside warranty. Thing to note is the warranty period expired while the board was away on RMA the first time. I'm a PC repair technician and system builder and found this to be an absolutely terrible experience. Going forward I will avoid and recommend to clients to avoid Gigabyte components.