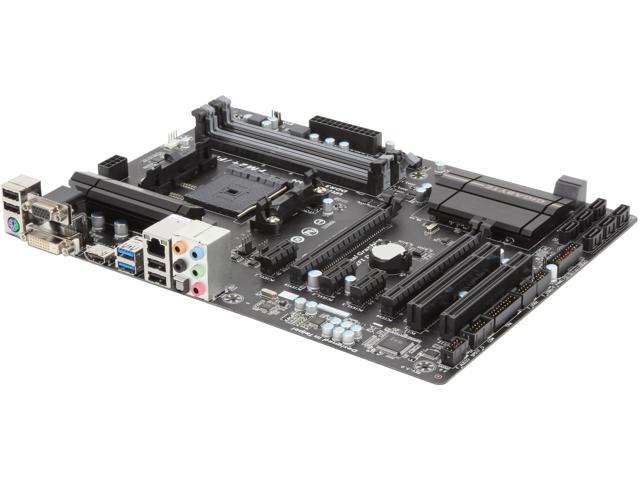 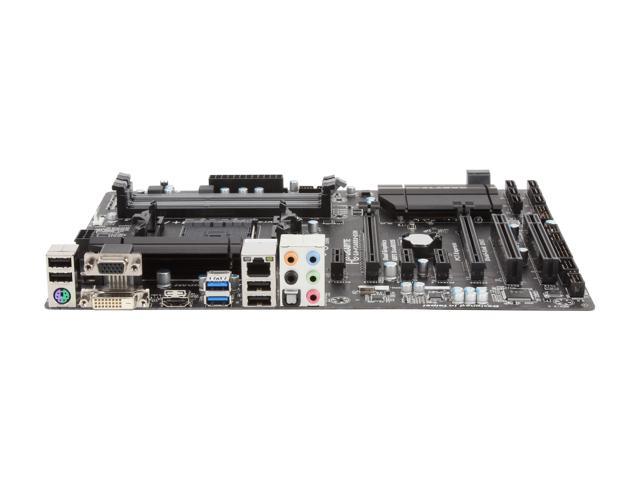 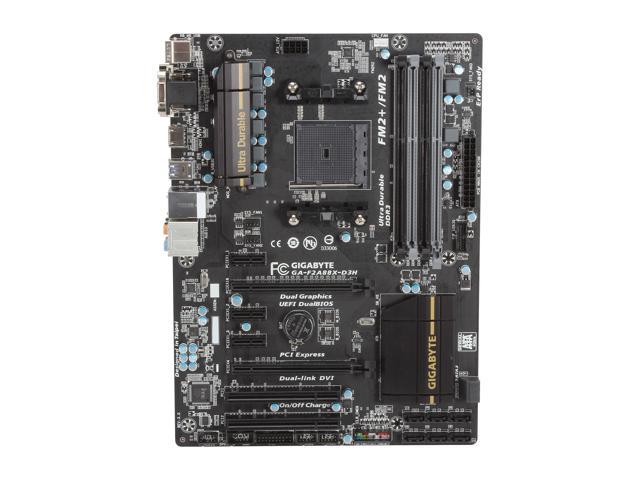 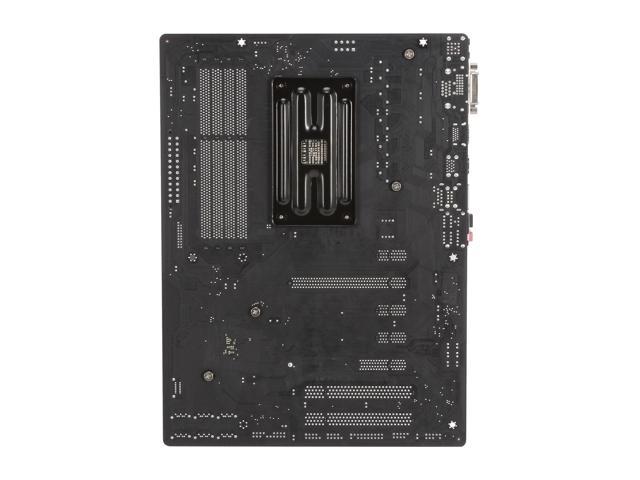 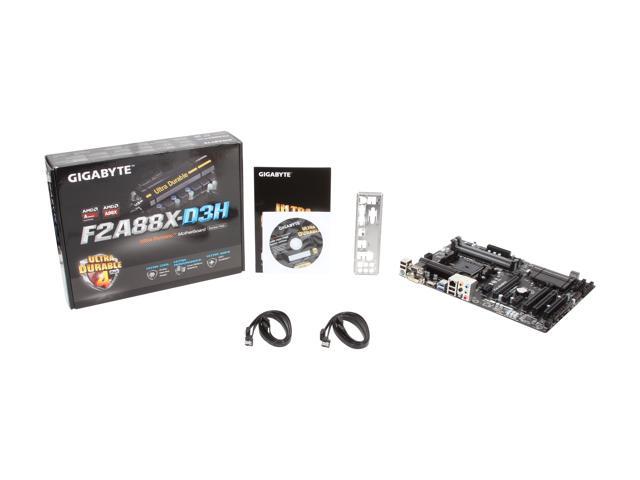 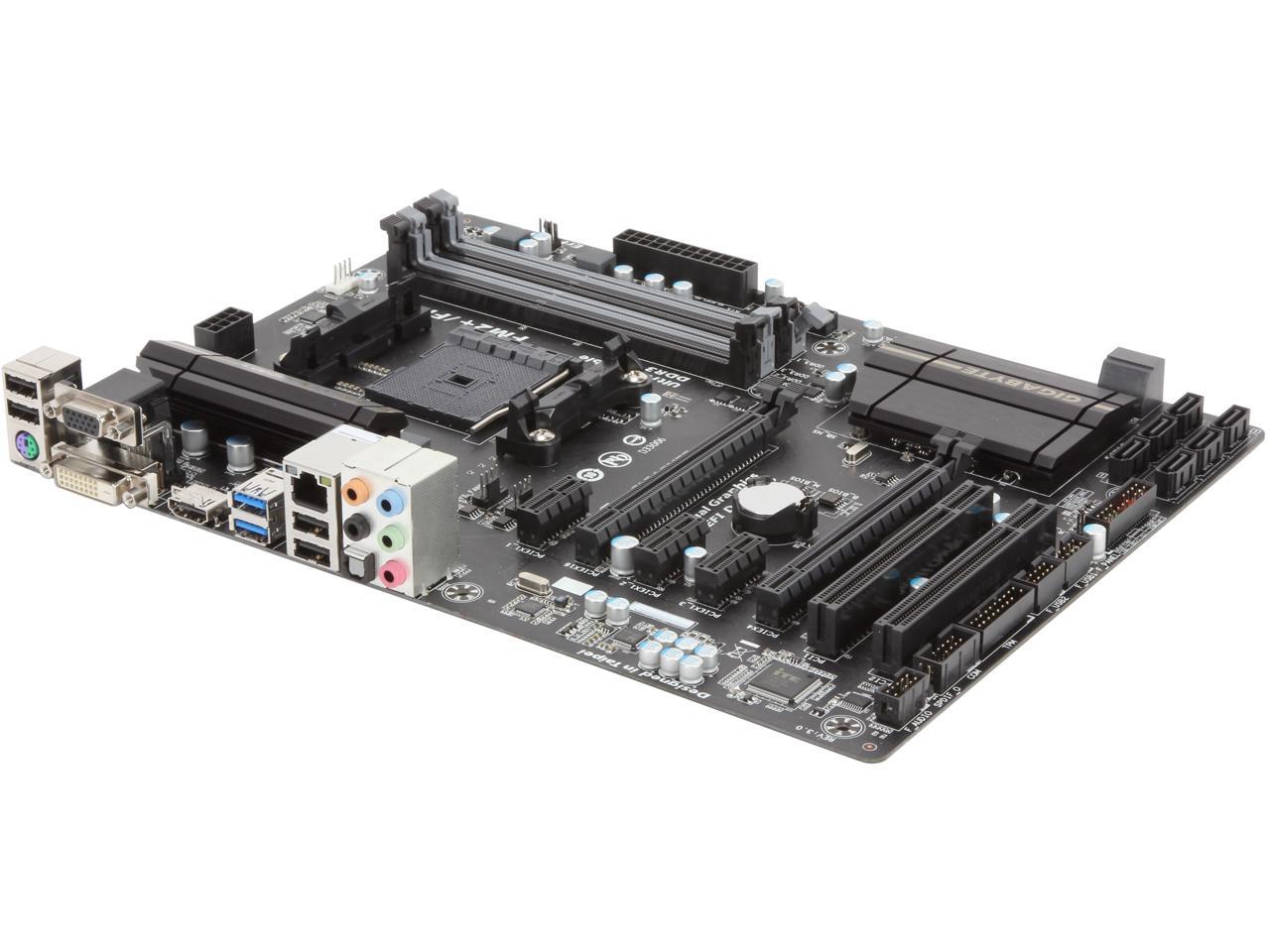 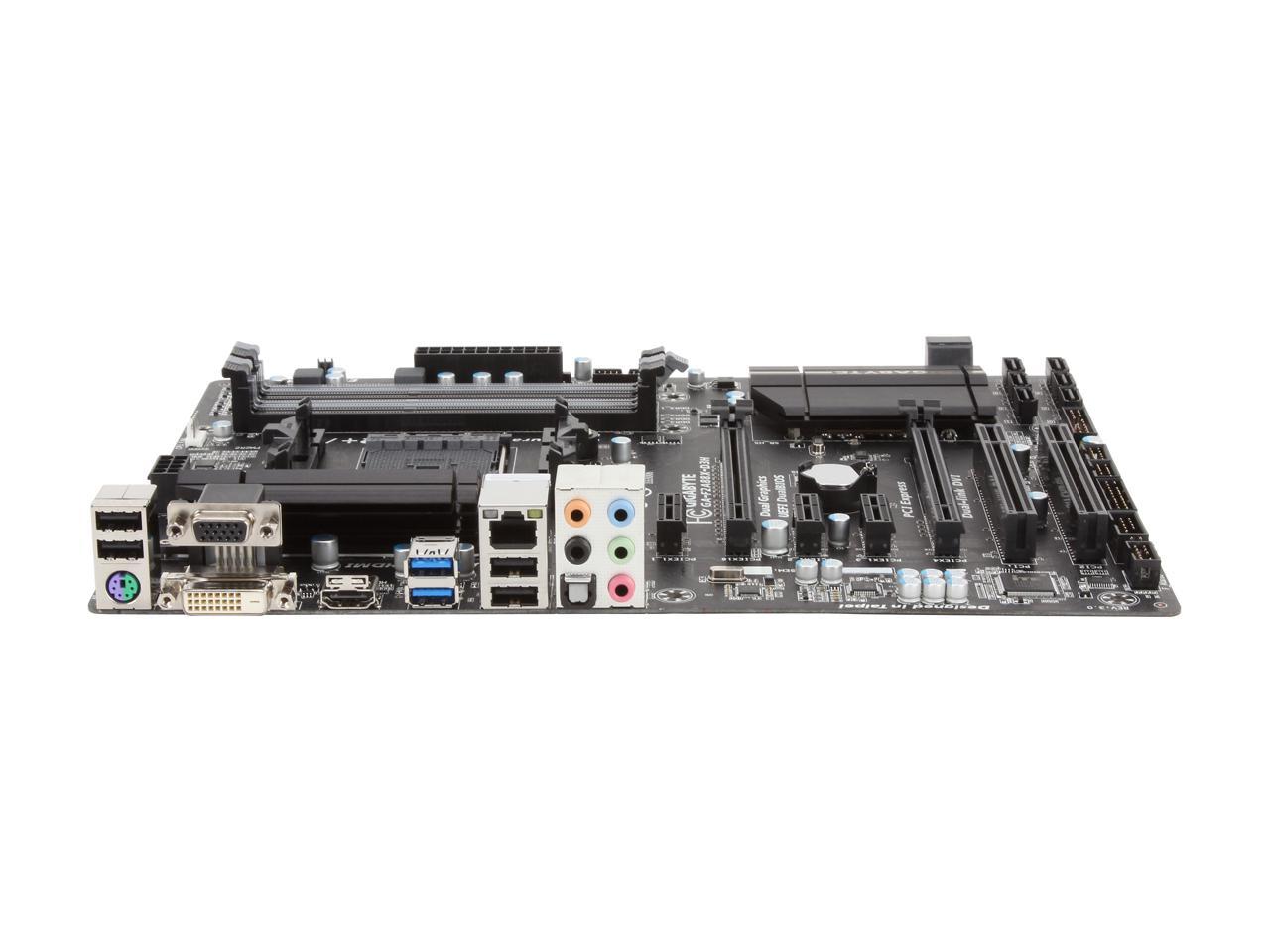 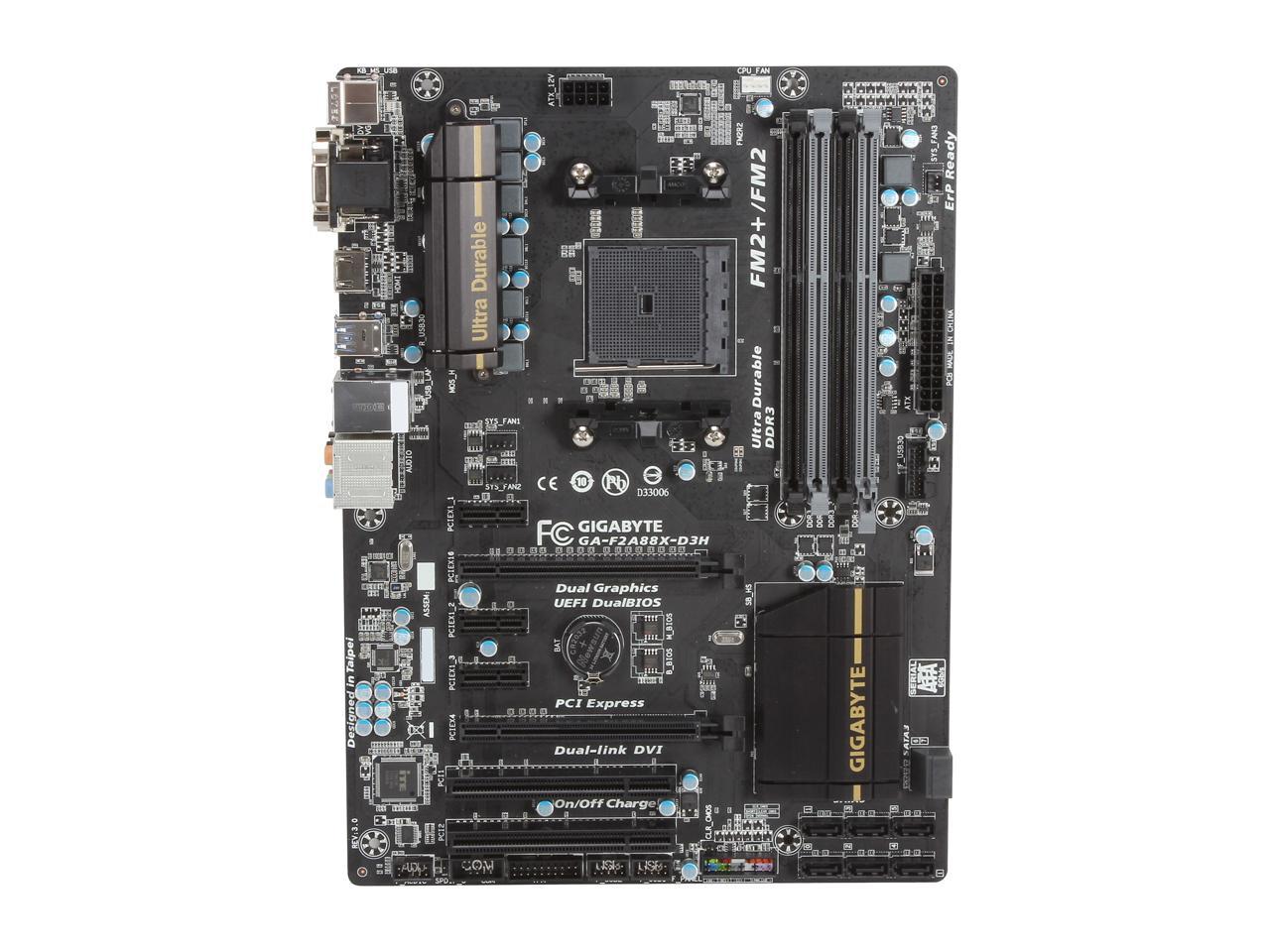 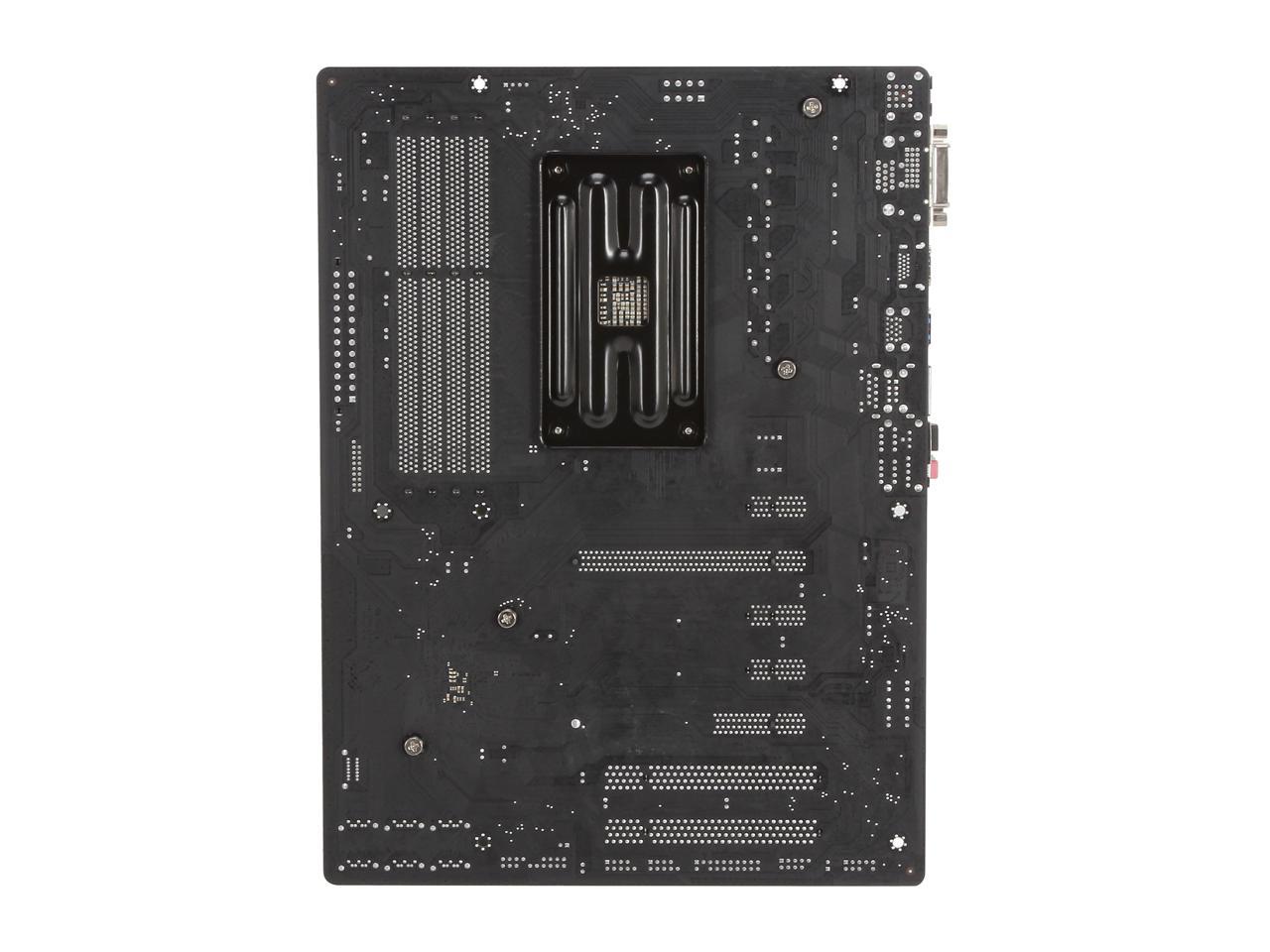 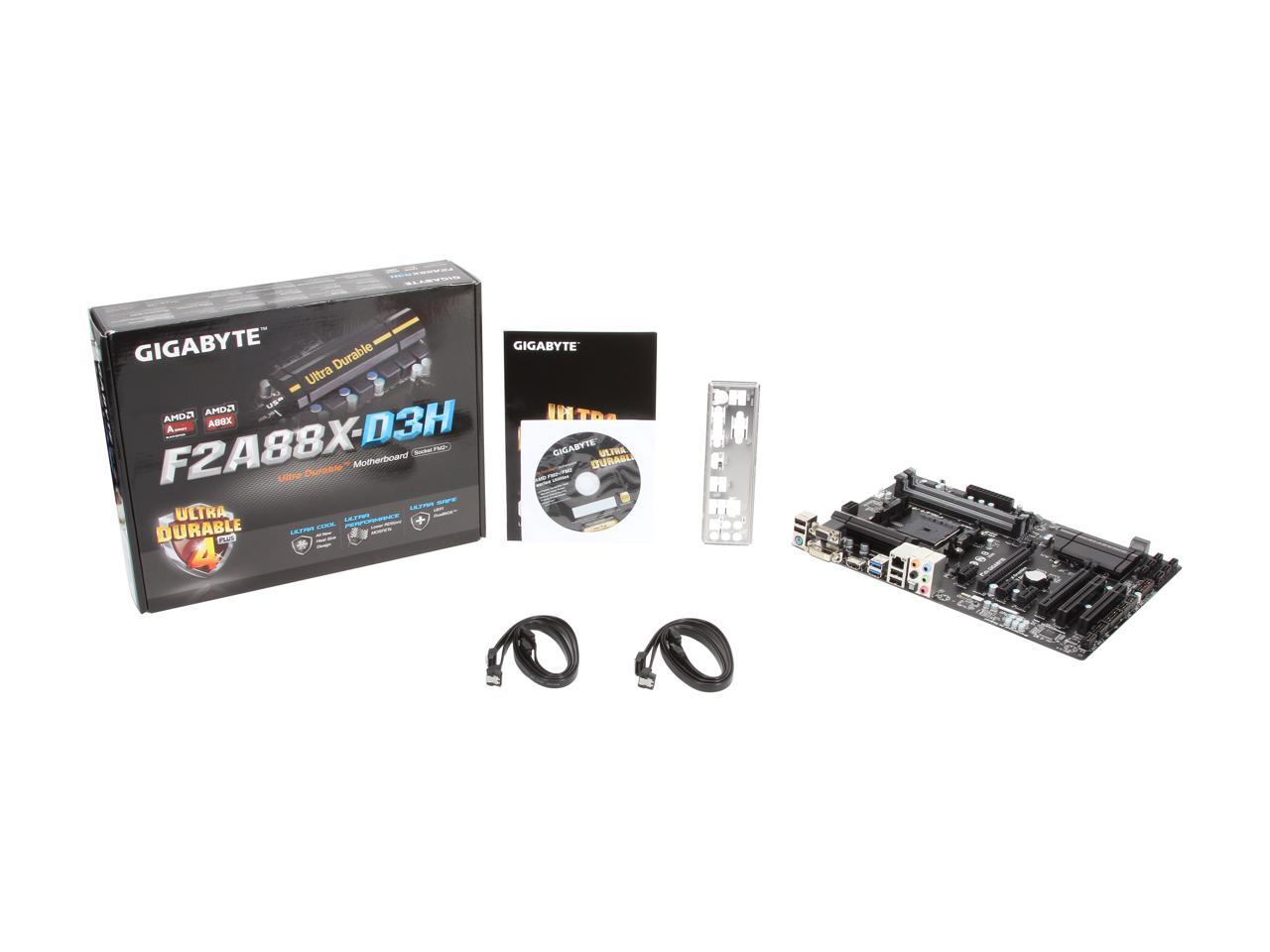 Note: To enable AMD FM2+ APU support, please update your motherboard with the latest version of specific BIOS and driver in Motherboard's Download section once available. GIGABYTE UEFI DualBIOS™
GIGABYTE motherboards feature GIGABYTE DualBIOS™, an exclusive technology from GIGABYTE that protects arguably one of your PC's most crucial components, the BIOS. GIGABYTE DualBIOS™ means that your motherboard has both a "Main BIOS" and a "Backup BIOS," protecting you from BIOS failure due to virus attack, hardware malfunction, improper OC settings, or power failure during the update process.

Flexible graphics capabilities - Up to two VGA cards are supported for two-way AMD CrossFire™ (running at x16, x4 bandwidth), delivering the ultimate in graphics performance for gaming enthusiasts who demand the highest frame rates without compromising on resolution.

HDMI means High-Definition Multimedia Interface, which is able to provide up to 5Gbps video transmitting bandwidth and also 8-channel high quality audio. By transmitting uncompressed digital data, HDMI is able to reduce signal interference when transferring between digital and analog signals, direct from the source. In addition, HDMI is compatible with HDCP (High-bandwidth Digital Content Protection), which allows playback of Blu-ray, HD DVD, and other protected content. Learn more about the GIGABYTE GA-F2A88X-D3H

Pros: This is a very well built piece of hardware. The first time I removed it from the anti-static bag, I was impressed with the build quality. It has performed well after uninstalling the @BIOS software package. Many great features at a good price. The BIOS is fantastic to navigate and overclocking is a pleasure.

Cons: @BIOS(especially easytune 6) is a pretty bad bundled in software package. It caused my computer to crash many times. I tried my hardest to make it work, but in the end I just uninstalled it and it cured my issues. I wouldn't recommend anyone to use this software. 24 pin ATX power connector can be hard to plug in since this board is not wide enough to use the standard ATX standoffs for support.

Overall Review: I would give it 5 eggs if it weren't for the @BIOS software being so terrible. As a piece of hardware, this is a fantastic motherboard. If you buy this board, uninstall @BIOS and you will have a fantastic experience with this product.

Pros: Bought this board to rebuild a family PC. It worked out of the box and hasn't given me an issue for a year.

Cons: None, other than I had to buy a new PSU due to the age of the old one not having a compatible power connector and that isn't the fault of the motherboard.

Overall Review: Used this for a parent PC. I would recommend it for an inexpensive build.

Overall Review: great board with lots of expansion, bios is cake to overclock and overall solid design. its just too bad intel feels the need to charge soo much for mid/high range parts, its just downright criminal. and i really do not believe an i3 can even compete with an a10 in performance.....(yes i know its quad vs dual) but i compare on price which is the most unbiased form of comparison.

Pros: Just adding to my previous preview. Maybe I should just give it one egg so gigabyte reads this review.

Cons: Just like to tell people never install gigabytes Utilities on your system. Don't have time to explain. If your having problems with your computer try uninstalling they're utilities first.

Overall Review: Another thing that makes me mad. if you install the drivers they have the driver CD loaded with junk software that has nothing to do with drivers. Google crome, google toolbar, Norton antivirus,etc.. When I load that my drivers I want drivers not software I don't like. Gigabyte needs to get that junk of their driver CD.

Overall Review: Got this to pair with my new FM2+ Kaveri and am not disappointed in the least! Absolutely love this new build. I love Gigabyte. Best motherboards out there.

Pros: Every feature I wanted at $20 less than the going price for a high-quality FM2+ board. More SATA ports than my case can fit devices for. Logical layout, and everything is labeled clearly enough to make the instruction manual unnecessary... yet it also came with a detailed manual. All bases covered. BIOS settings allow GUI control over everything that I used to do with jumpers back in the 90s... plus some. Lots of display ports, I've got a multi-monitor setup using monitors of various ages... even my old 17" VGA is being used again. Plenty of room if I ever decide to crossfire an R7 video card or two with my 7850k.

Cons: First one came DOA... wouldn't POST, the most I could get out of it was power to fans... and I could force a RAM error beep. The board isn't wide enough to rest on a standard ATX standoff position to support the corner that carries the RAM... so I had to jury-rig the case with a plastic standoff and zip-ties.

Overall Review: To anyone wondering about the case I kept mentioning, it's a first-generation Antec 900 that I've had since 2007. It modernized nicely with a 5.25" bay USB3.0 expansion. The RMA process cost me an extra $11 shipping, but it was very timely. The replacement board works just fine.

Overall Review: Build is as follows: 1} mobo is GIGABYTE GA-F2A88X-D3h 2) Rosewill HIVE Series HIVE-650 Continuous 650W@40°C Power Supply 3} 2 x G.SKILL Ripjaws Series 4GB 240-Pin DDR3 SDRAM DDR3 1333 (PC3 10666) Desktop Memory Model F3- 10666CL9S-4GBRL 4} Athlon X4 860K Kaveri Quad-Core 3.7 GHz Socket FM2+ 95W AD860KXBJABOX Desktop Processor 5} Intel 120 Gig SSD pulled from my main Computer when I upgraded to a 256 GB Samsung SSD 6} a pair of video cards verified to work in other computers. First one I tried was an XFX A 2 gig AMD 7750 that does not require power from the psu. Fans would not even power on when in either PCE video slot nor would it put out video. Thinking the power draw might be too much (not the case as I used this card in a computer where I successfully run the card after swapping in my out my 650W PSU), I then tried my other card a SAPPHIRE Radeon HD 4670 DirectX 10.1 100296HDMI 1GB 128-Bit DDR3 I had laying round. This video card didn't produce video either, but at least the cooling fans on the card powered up. This is not my first computer build and 3 of my last 4 builds used boards from Gigabyte without any issues in either setup or running over the last 8 years. Very disappointed in this board. I am aware that I bought a board intended for an APU style CPU and that my CPU is not an APU. The Processor listed is listed as a supported CPU, however and I don't feel that that should be an issue. My build is intended as a combo file server and Linux based HTPC with a pair of tv tuners.

Manufacturer Response:
Dear Customer, Thank you for your comments. We apologize for your difficulty with your GIGABYTE product. Please contact us at newegg-support@gigabyteusa.com with the case number 134364 in the e-mail subject line. We will provide personalized service and analysis to help solve your issue ASAP. If the matter is urgent, please send us your contact number, and we will contact you. GIGABYTE VIP Support Team