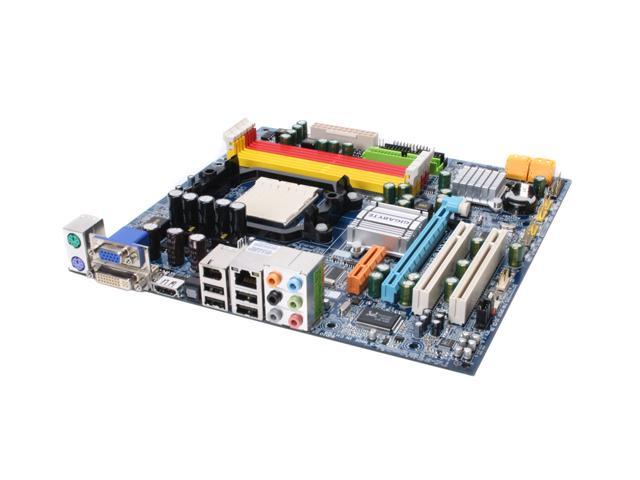 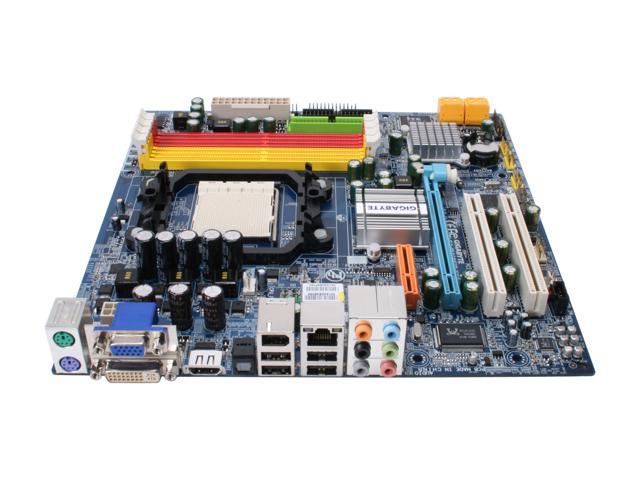 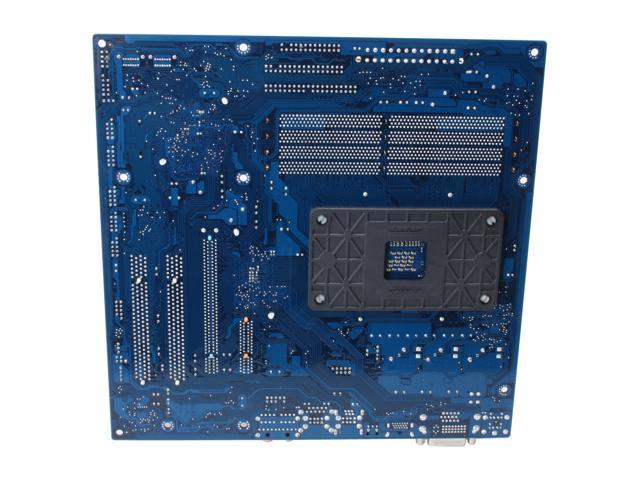 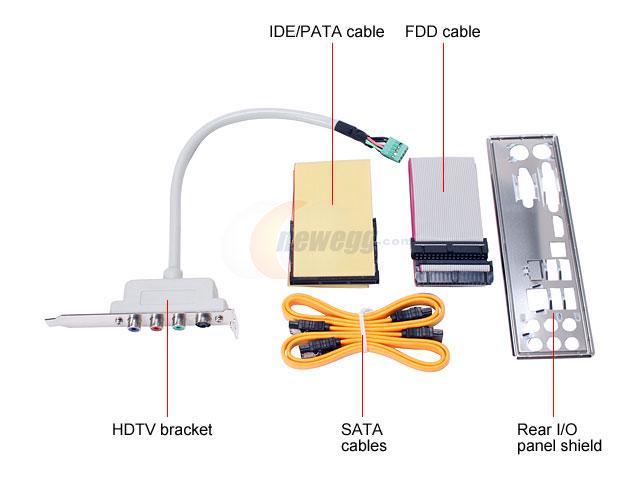 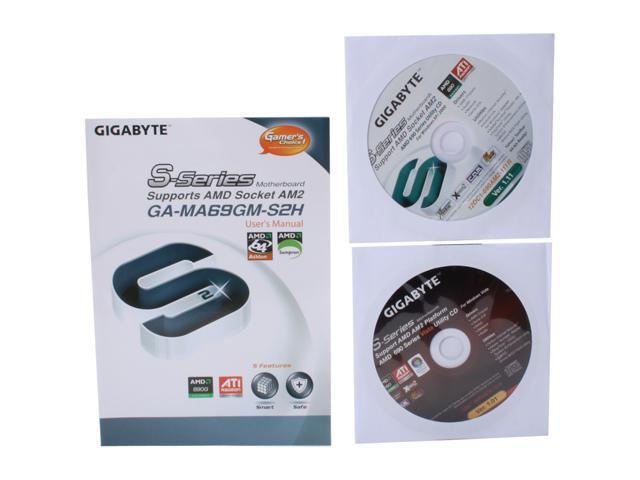 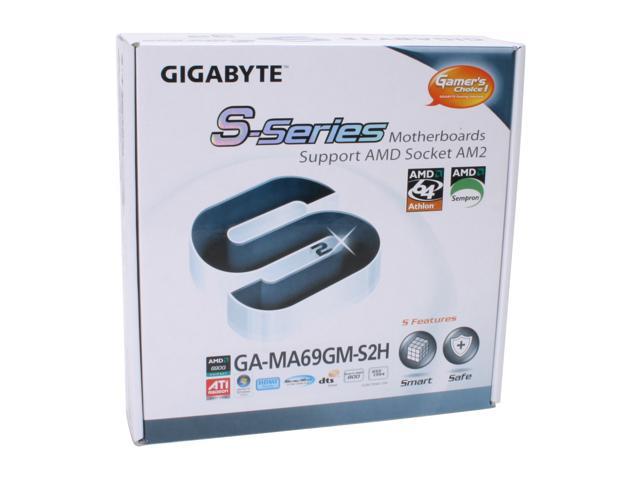 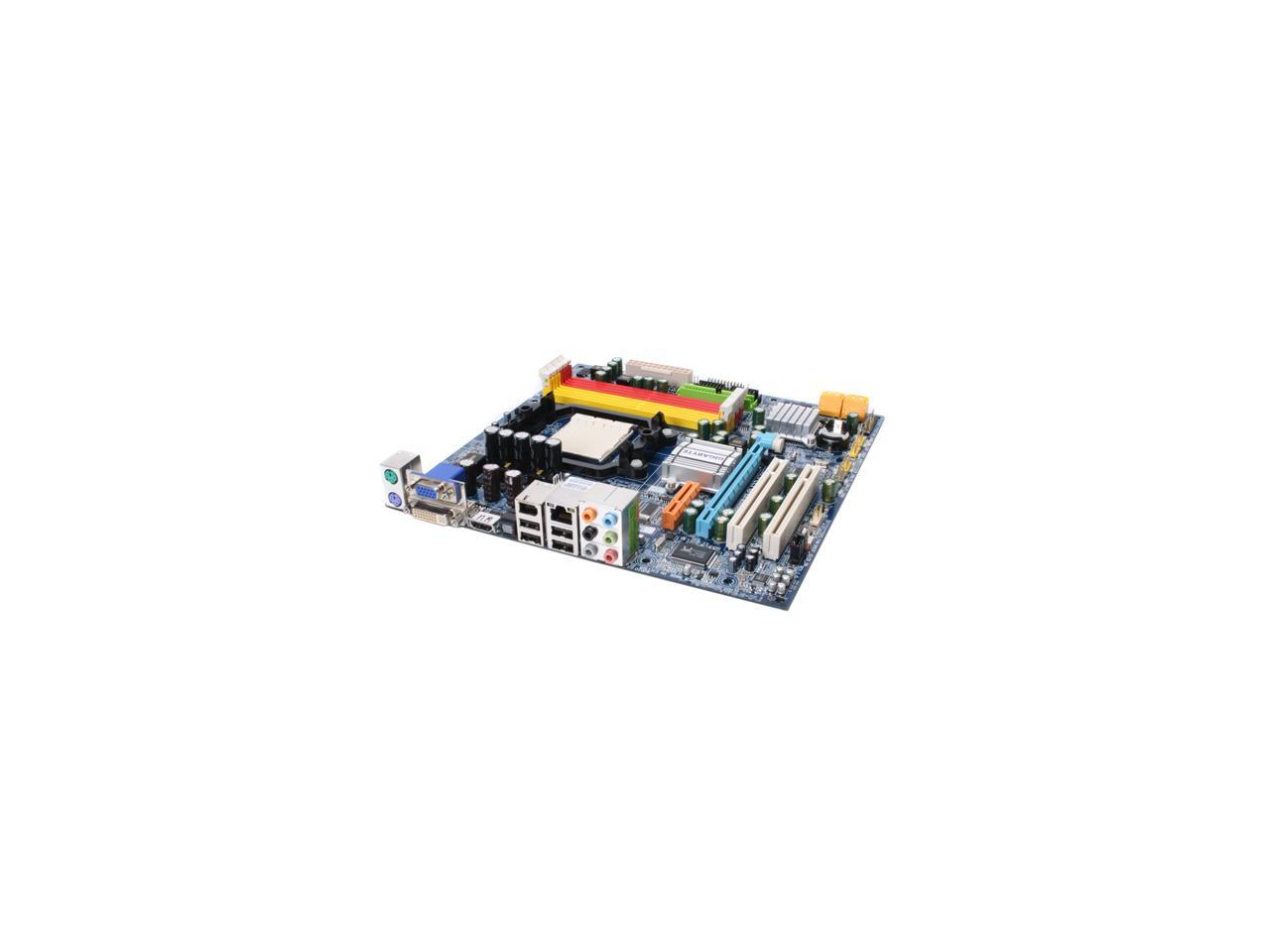 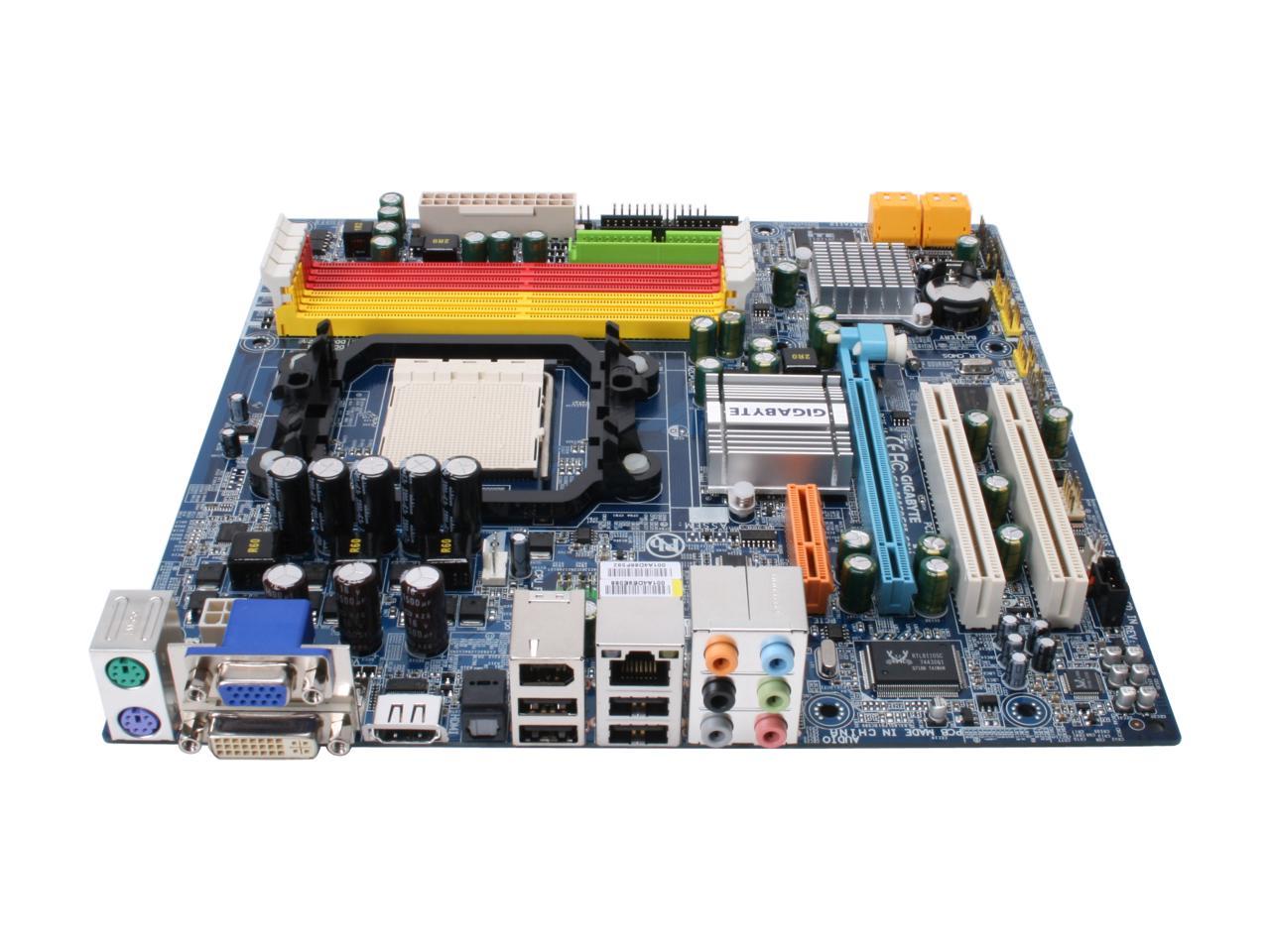 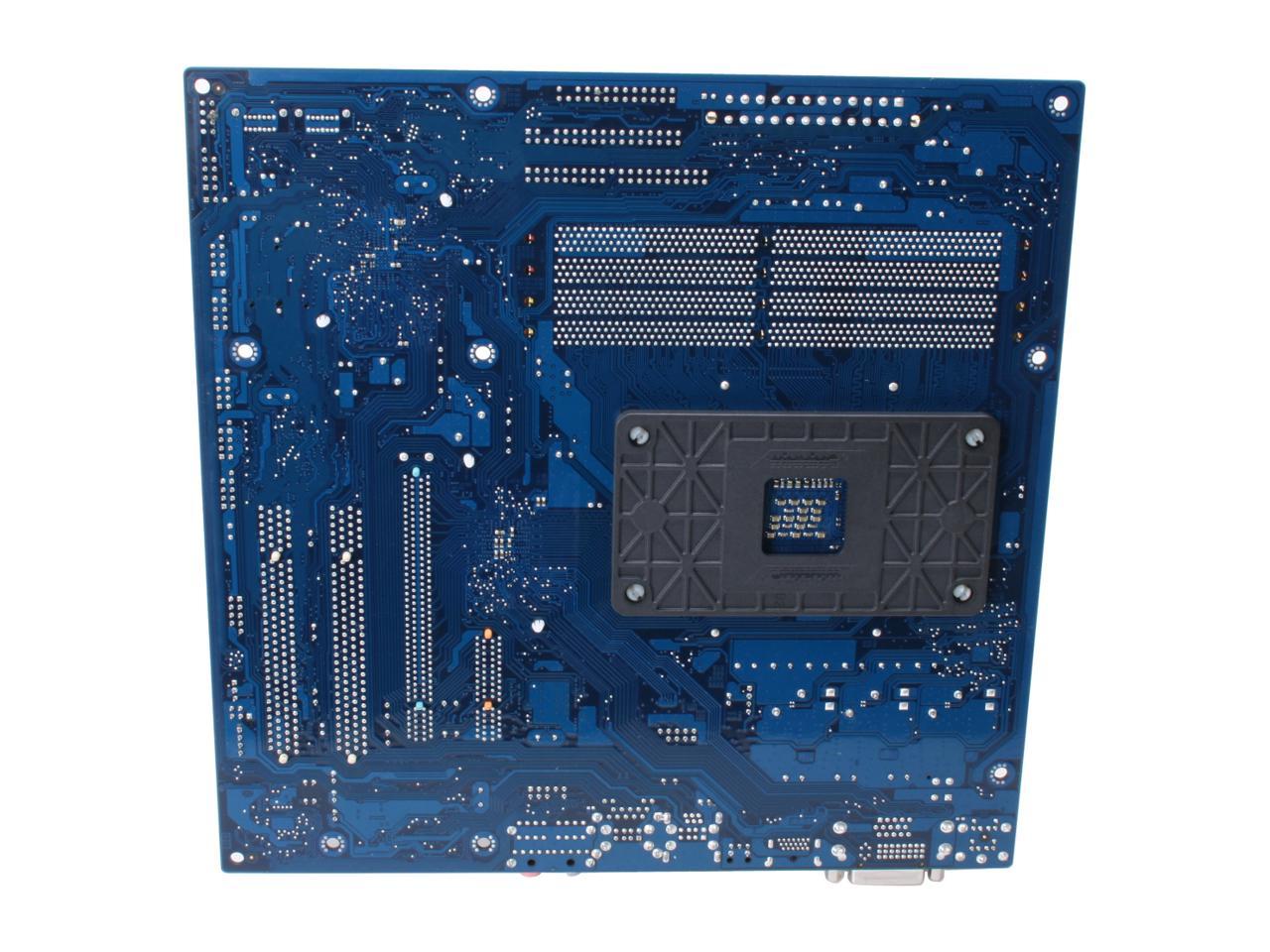 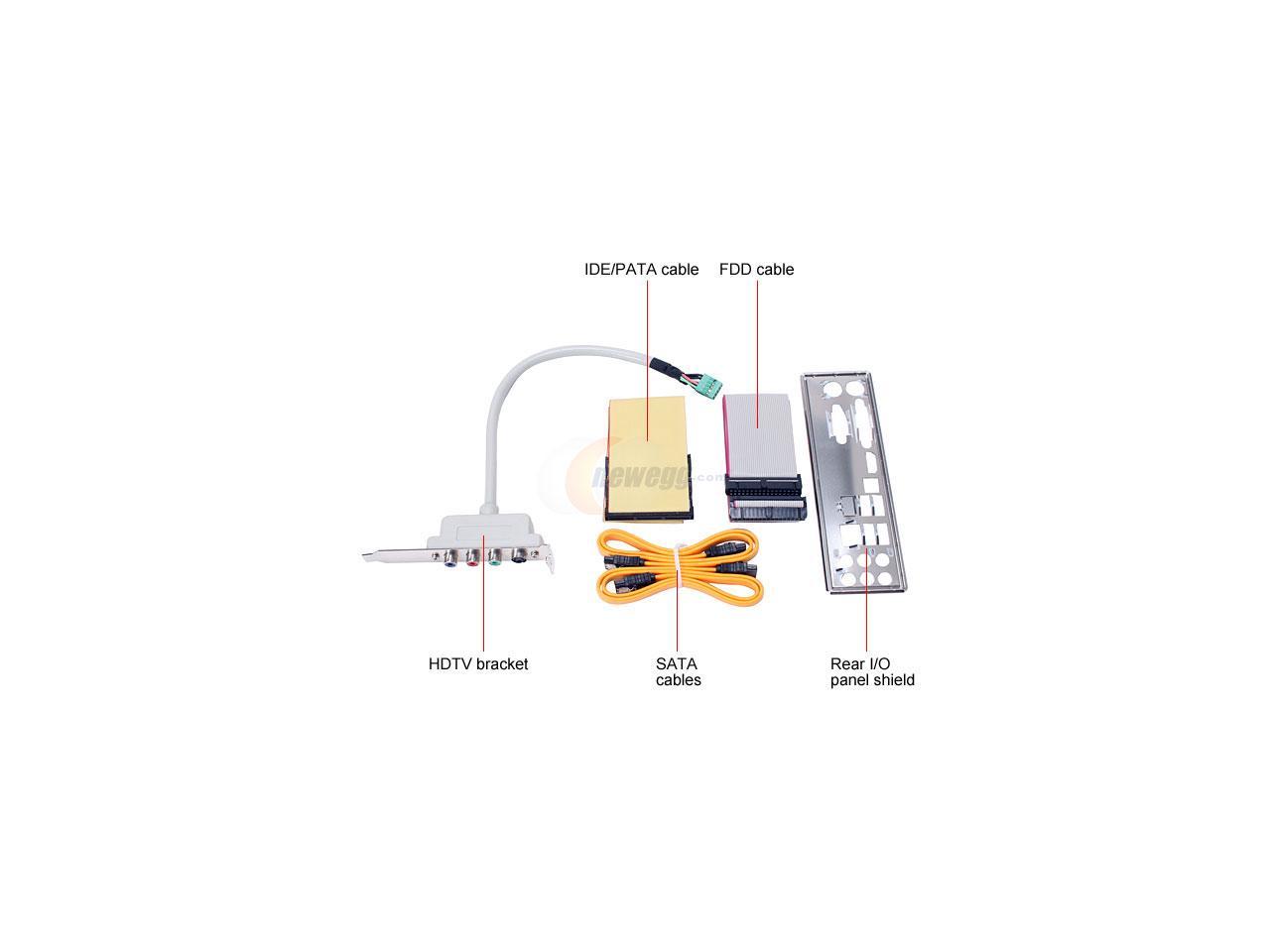 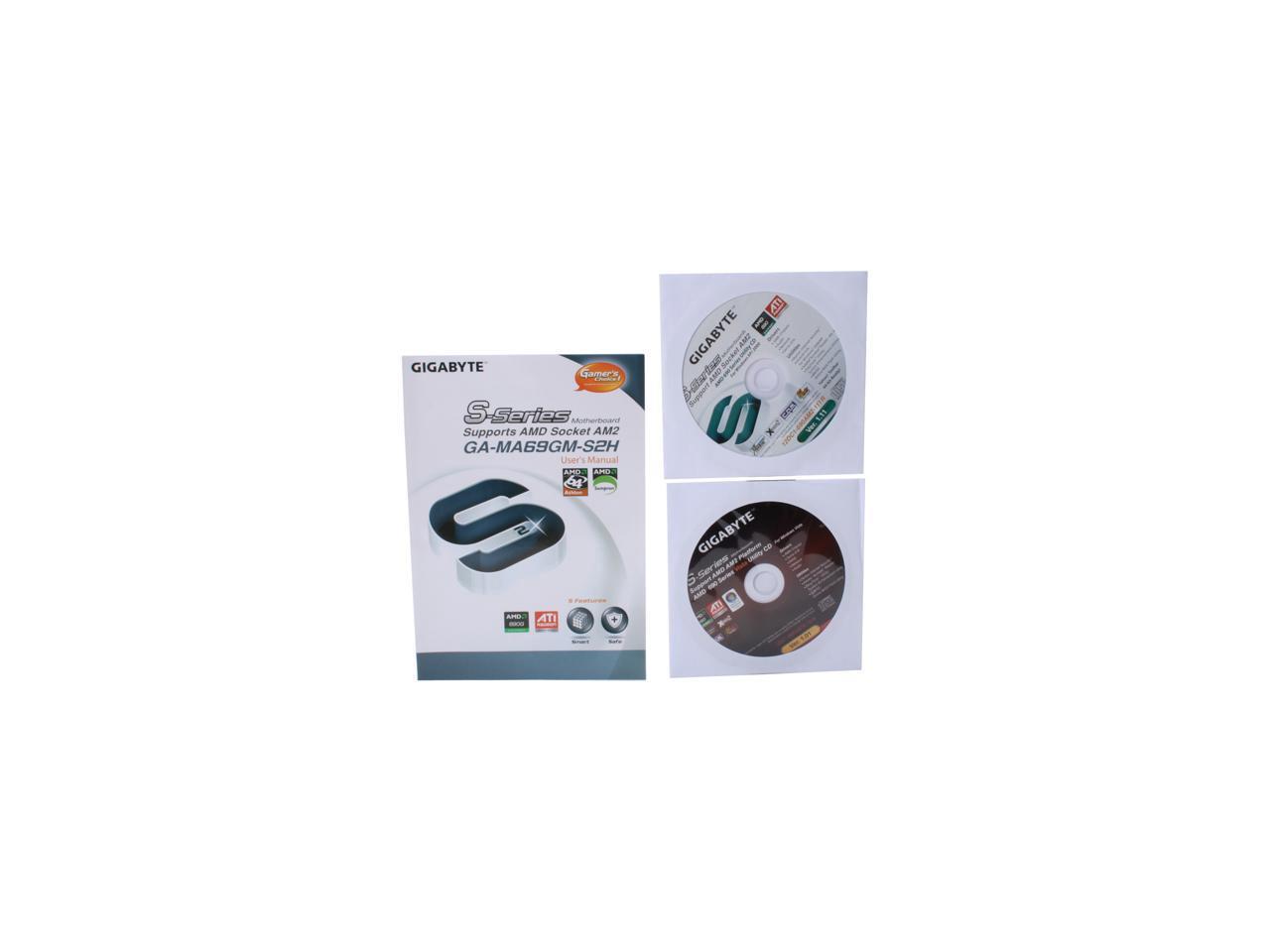 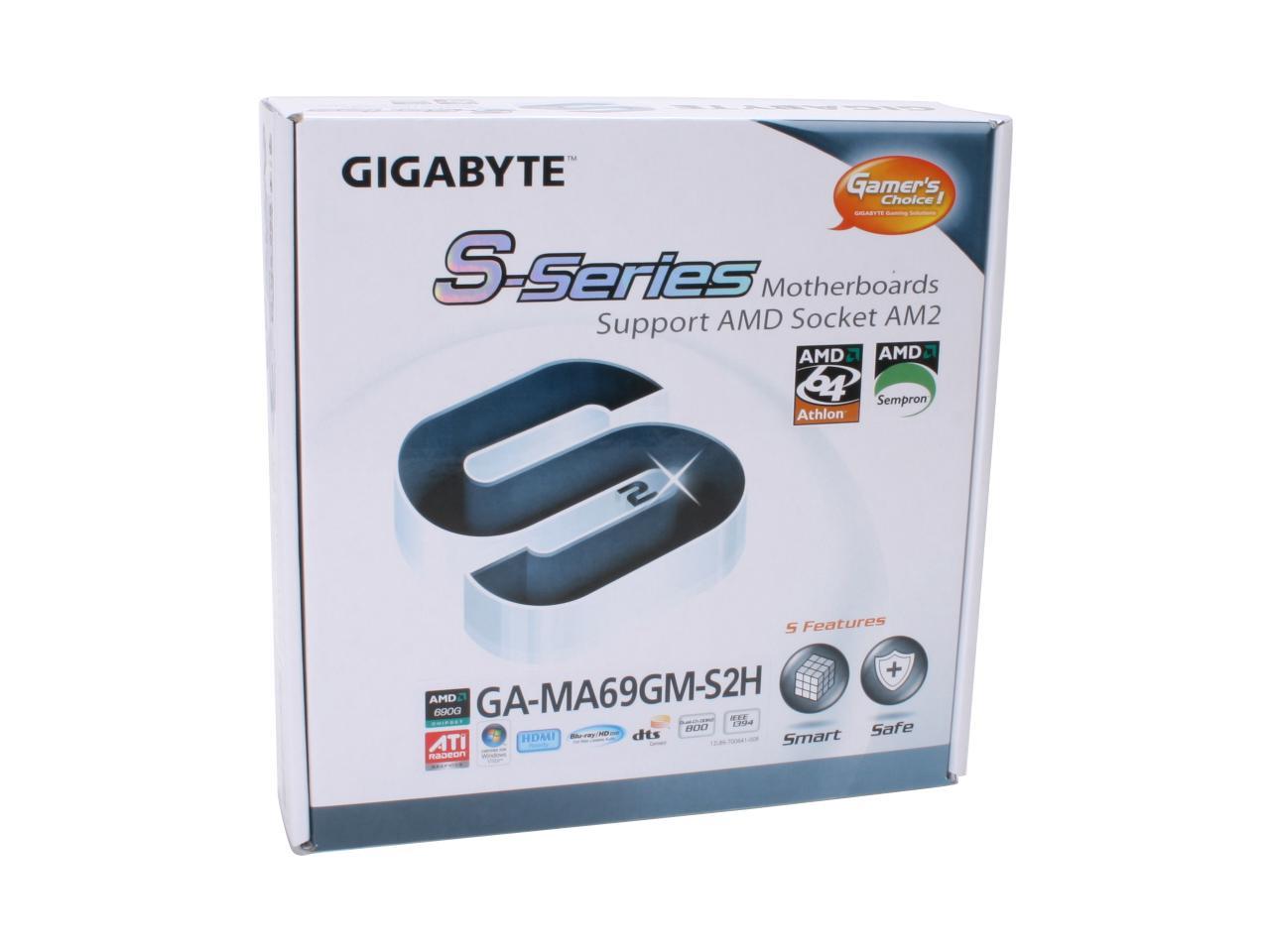 Learn more about the GIGABYTE GA-MA69GM-S2H

Pros: Works well, ubuntu recognized all the onboard devices out of the box.

Cons: This board disables the AMD CPU's hardware virtualization feature. None of the gigabyte documentation I have found reflects this, however, after contacting support I was informed there was no way to turn this feature on. This is a problem because I cannot run fully virtualized machines under Xen.

Overall Review: Documentation or marketing material should reflect that the board disables certain CPU features.

Pros: HDMI, DVI, and VGA, all in a small package. LOTS of headers on the board (USB/1394/Azalia). A PCIe x4 slot instead of a x1 slot (see cons though). Lots of BIOS options, including overclocking, with the one exception of voltage control (which really kills the OC ability).

Cons: I like this board overall, but there are a few things that really annoy me. First of all, the north bridge gets hot...REALLY hot. So hot, you can't keep your finger on it for long. I wish Gigabyte would have used a heat pipe design for NB cooling instead, which would have allowed them to keep the NB where it is w/o sacrificing the x4 slot. Another thing to watch is the fact that this only takes 1.8v RAM, so be careful with what you buy (I went with 4x1GB G.Skill). Oh, and the HDMI and DVI-D outputs cannot be used at the same time (same deal with two analog outputs-see manual). The other thing that really bothers me is that this board doesn't come with the S/PDIF I/O bracket. Gigabyte has the model # on their site, but as far as I can tell you can't order it anywhere (except wholesale). Maybe this board is just too new, and it'll be more available in a few weeks/months. Lastly, the sideways SATA ports are a bit of a pain, I would have preferred the more common vertical headers.

Overall Review: This board has a lot to love. 690G chipset, PCIe x4 in addition to its PCIe x16, and more A/V and digital ports than you'll probably ever need (10 USB ports!). However, the few drawbacks I mentioned in the cons costs this an egg. More than anything, I'm concerned about the NB temp...it runs really hot when idle, and only gets worse when gaming. I'd worry about it even more if I had a PCIe card sitting over it, but I can sacrifice the slot to put in a custom cooler (which I plan on doing soon). Integrated GPUs just generate too much heat for that passive heatsink cooling.

Pros: all popular screen outputs, very stable out of the box with the original BIOS. excellent HTCP or casual gaming board, even with the built in graphics.

Cons: has all overclocking options except voltage (Ctrl+F1 in main menu in BIOS). 5 eggs However, because this board is not intended for hardcore gaming. I managed to get 4, 4, 4, 10, 1T without voltage adjustments (cpu on stock speed), I don’t know if it’s the motherboard or the mem all I know is that it worked for me and hopefully it would work for someone else. all you need to do is to disable amd’s Cool N Quite feature in the BIOS, also I don’t know if this is important but I set my mem frequency to 800 instead of auto. When you do this, your mem is going to operate on a steady 375MHz (with cool n quite enabled mem frequency goes up and down and can reach 400MHz which make an overclocked mem unstable without voltage adjustments).Continued in "other thoughts"

Pros: Has every video-out you could possibly need. Onboard video works great with Vista Aero and movies look beautiful. Firewire onboard, micro-ATX, gigabit LAN, rock solid stable board. Booted up first try.

Cons: BIOS maturity: You'll need to use an 'unofficial' BIOS to get voltage adjustments. I'm using the official F4 BIOS and even though I've manually (CTRL+F1) set memory timings to RAM spec'd 4-4-4-12, CPU-Z shows 4-5-5-18 (only the first CAS value reflects BIOS settings). Gigabyte tech support was contacted, and they wrote back "Unfortunately there are no memory timing setting available for this motherboard. BIOS will auto detect the most stable setting for your system". Also, AMD Cool & Quiet quits working with the F4 BIOS. According to online forums, a bootleg F4a BIOS fixes C&Q but I cannot verify at this time. I cannot find any memory remap setting in the BIOS, so good luck with 4+GB RAM. NB Gets too hot: With the stock HS, I would get artifacts withing 15 minutes of watching a movie. I had to replace the HS with an aftermarket one (ZALMAN ZM-NB47J). I still get artifacts after a while if I'm encoding video = 100% system load for hours.

Overall Review: Despite my long winded Cons, I'm happy with this board. I think my NB heat problems stem from my use of a CPU cooler that blows air out the back of the case instead of down towards the board which would help cool the NB chipset. Specs: AMD 5200+ X2 Brisbane, Scythe Mini Ninja HSF, PQI Turbo 2x1GB DDR2-800, Western Digital 1TB GP HDD, Hauppauge HVR-1600, Memorex 20x DVD-R/W, Moneual Moncaso 832P, Netgear WG311T.

Pros: Good little board. This was my 2nd choice b/c the day I went to buy, the full ATX version was of stock. No worries, I didn't actually need the extra expansion slots. Fits absolutely fine in an ATX case. Using it for professional photo editing. 6000+ stays cool at 27/45C. 4GB is no problem (install only 2GB for OS install, then the other 2GB after OS is up and running). Onboard video isn't for gaming, but I knew that when I bought it. Can't speak for onboard sound, b/c I'm using a discrete add-in.

Cons: I was being a tard when updating BIOS before OS install. My floppy was acting up (yes it was my floppy, not the board), and so I wasted 2 hours trying to update the BIOS. I had read the manual 50 times and seen that it said I could use a USB stick for BIOS updates. I didn't trust this statement. But after all the trouble with the floppy, I tried my USB stick. Instant recognition. I updated the BIOS immediately and was on my way. You should update the BIOS use a thumbstick or in Windows.

Pros: It has VGA/DVI/HDMI and HD Audio all on the back plane and throws in Component and S-VGA as well... What is not to like? The inclusion of 4 memory slots for 16gb, FireWire, USB2, Gigabit LAN, and 4 SATA 3.0gbs ports is also a plus. I am using it with the following parts: Athlon 64 3000+ Orleans, 1gb kit from Corsair, Western Digital HDD (160gb Sata 3.0gbs) and Antec's Basiq 350w Power supply.

Cons: NONE! - it is exactly what I expected and more. Gigabyte has nailed it with this one. Simply put - It just flat out works! When was the last time you did not have to mess with settings on a custom build?

Overall Review: This was for a Media Center setup and it booted correctly from the first power on, and has been running great ever since! The SATA drive did not need drivers loaded for Windows, everything was correctly identified in BIOS, and BOTH Windows XP/Vista do not have issues with drivers. Linux has problems with ATI based cards (ATI is a little behind on that issue yet) but there is a work around for it. For all of you that want to peak and tweak this board you need to remember that the advanced controls for BIOS settings are hidden, use the Ctrl+F1 keys to enable them if needed.

Pros: Other reviews cover most of the good points. One outstanding plus for me... I am using this board for SageTv and 2 HDHR units. Building your own PVR can be a pain, many times over the years I have decided I have things sorted out and I should do a rebuild. With my old board that meant doing a full windows XP install with its 80 + updates. Half a days work. With this board there is a feature called Xpress Recovery2. I was able to build my system up to where I had all the XP updates, drivers installed and then stop and use the utility to create a backup of my system. Now if ever things change and I need to start over I am half way there. Have used Acronis to do the same but it was a pain. On my final build I did use the the feature and it worked perfectly.

Cons: One negative.. The SATA header block points towards the back of the board, not up in the air from the board. As my board was against a panel I had to clean out my box and cut a hole to connect my sata cables. Not a big problem but added a few hours to my rebuild.

Overall Review: I think this is my first newegg review and I have been purchasing for many years here. Was impressed with this item. I didn't use the onboard video. Have a Newegg Item#:N82E16814121076 Video Card. The whole unit is silent as. I have had no issues in setting this unit up.

Pros: I got it from Newegg before any reviews were posted here. Boy was I lucky! Video is good for 1080p, even from x264. Runs my AMD Brisbane CPU 1.9ghz at 2.9ghz...with the stock BIOS (no voltage adjustments). At this O/C level, it still was stable enough to boot comfortably into WinXP and activate RMclock for a voltage tweak to 1.25v. But you may not need this software. While GA has not officially released a BIOS with CPU and memory voltage adjustments to the public yet, it did send it to reviewing websites. ONE enthusiast. of them, at the very VERY end of their glowing review for the mobo, offers (and honored) to send a copy upon request. Search...and REQUEST. Works great!

Cons: No valid "Cons" at this price point. It really is a winner for HTPC applications (though heavy gaming is probably not its strength). Comments by others before, cover the easily forgivable annoyances; no show stoppers, though. Gigabyte's USA website is slow for downloads but the other countries are fine. I used Europe, I believe. Read the manual before buying if you need to make sure about its limitations (very few).

Overall Review: Virtually silent with a low wattage fanless PSU and COOLER MASTER Gemini II (using just one low-speed fan). At 2.9ghz, CPU never reaches 40c temp unless doing heavy video encoding or Prime95...44c max ever. Energy efficient. GSkill low-cost memory (Newegg item N82E16820231098). Dual monitors (XVGA and HDMI 1080p TV) work smoothly. I have NOT attempted to push this board to its limits; it did more than I expected from day one and my wife loves this "her" new HTPC rig...