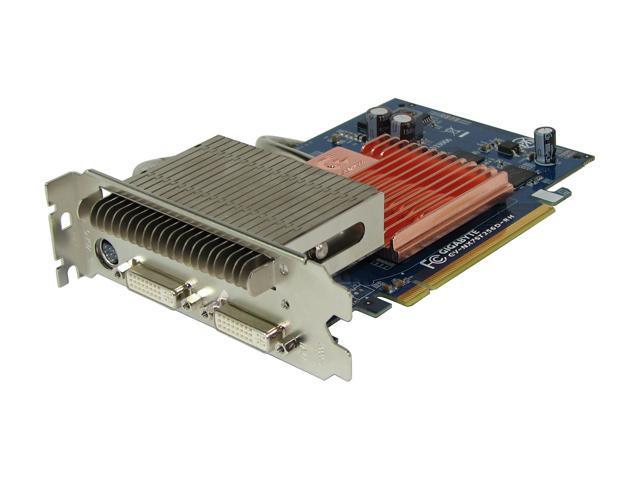 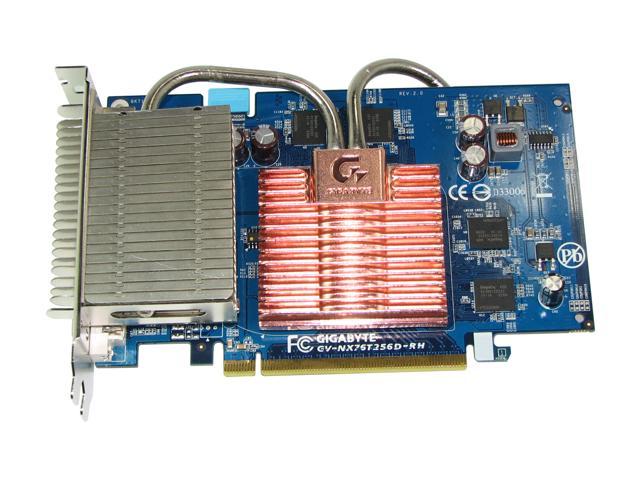 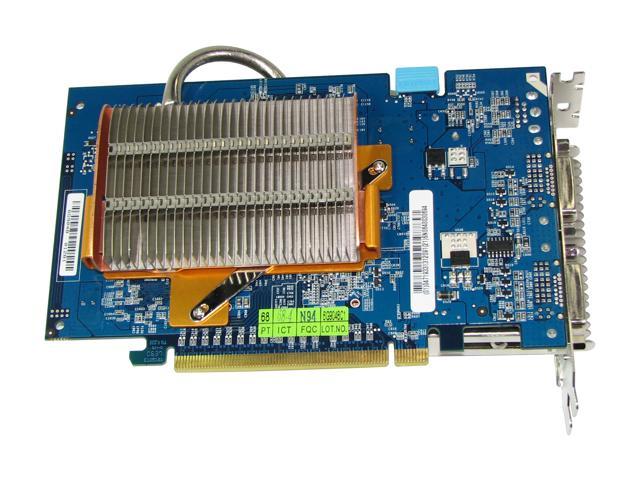 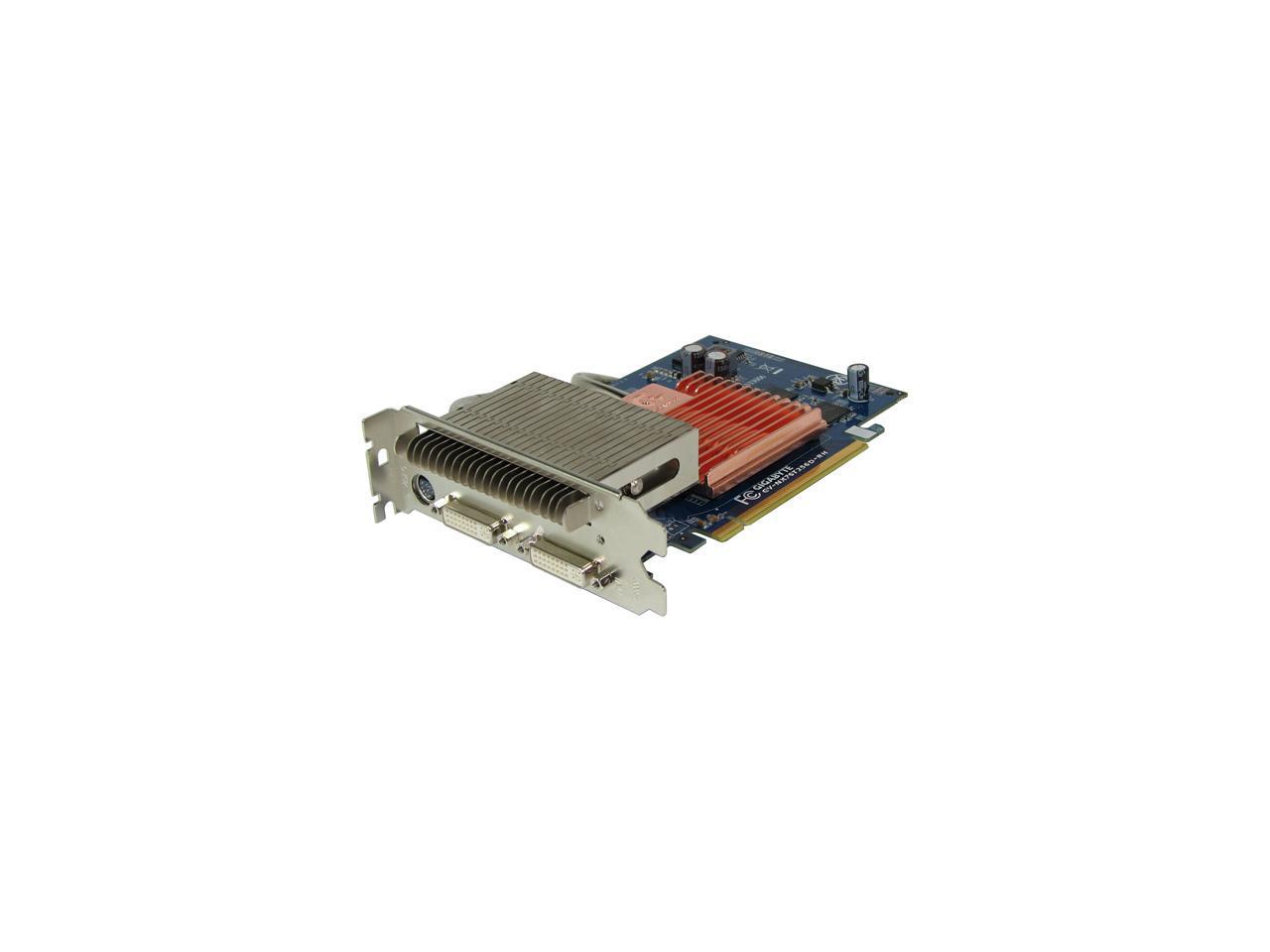 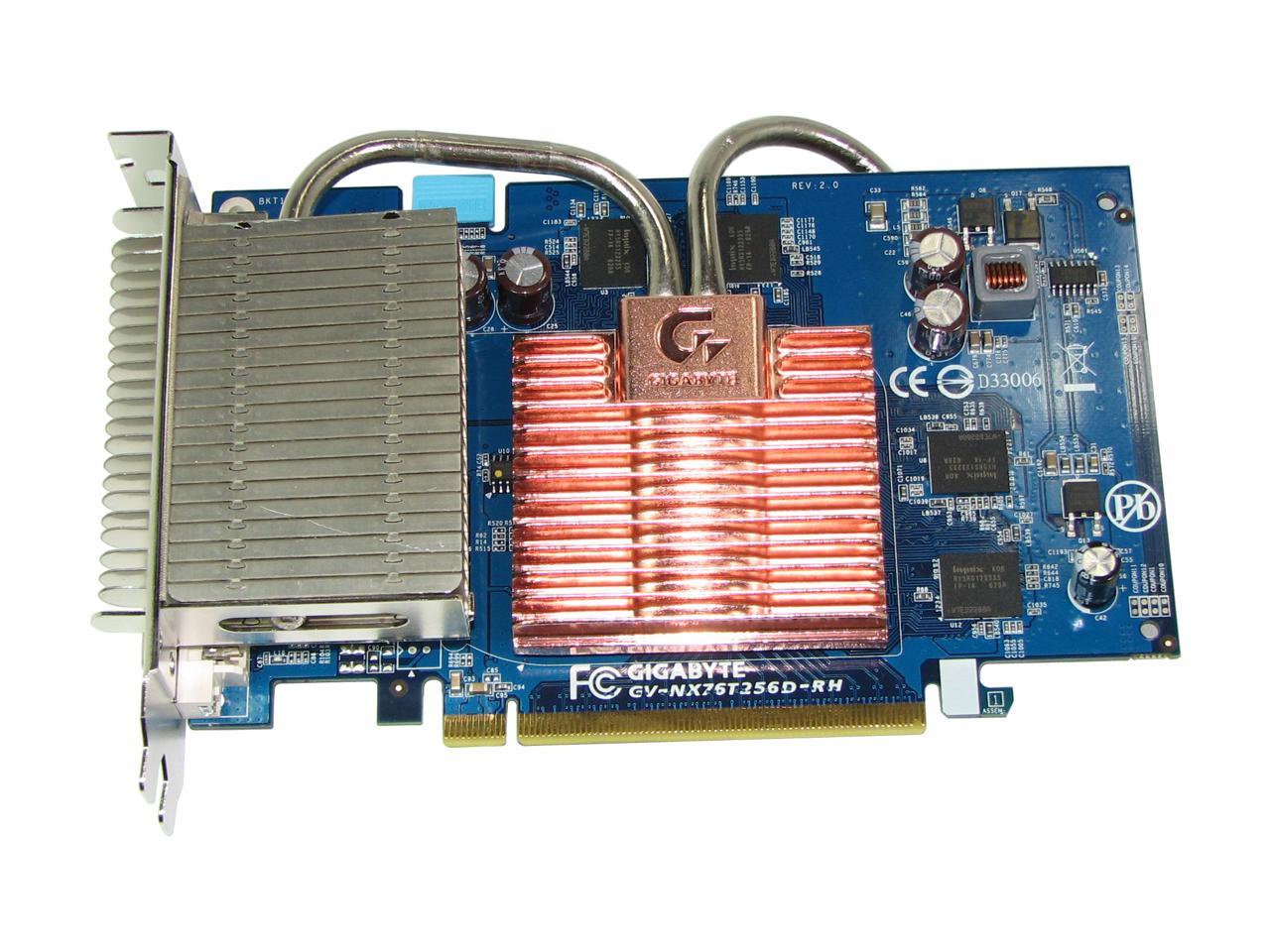 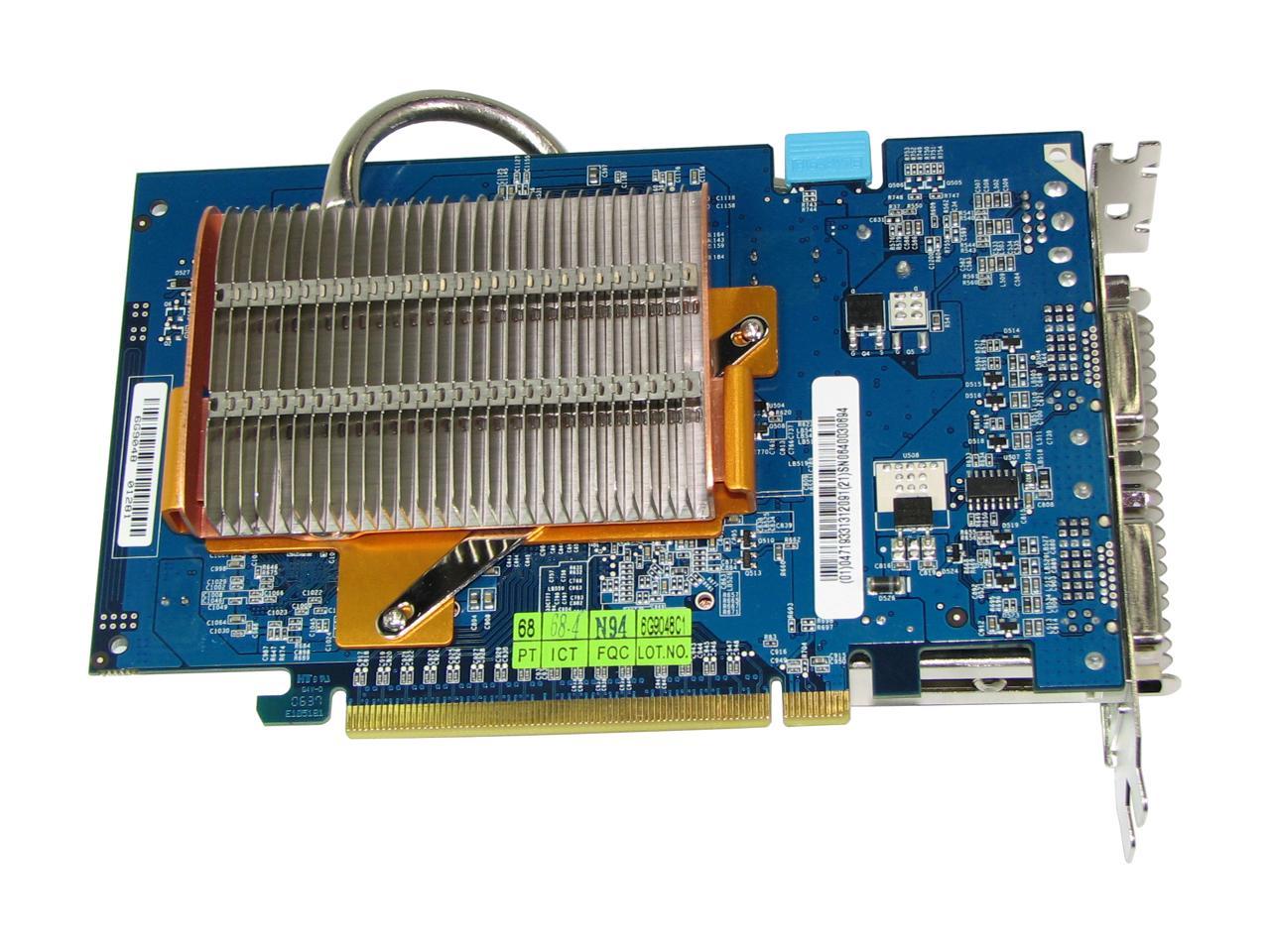 (175) Write a Review
OUT OF STOCK.
Overview
Specs
Reviews
The wide range of cards based on the GeForce 7600GT GPU is sometimes confusing for the novice graphics card buyer. In Gigabyte’s GV-NX76T256D-RH Silent Pipe II, you find a talented card capable of solid graphics performance that doesn’t require a noisy fan to dissipate the heat generated by the card. 12 pixel pipelines and 256 MB of onboard GDDR3 memory running at 1.4GHz will let you run your best games at their highest settings and suffer no loss of performance. You can be assured this ability will last, due to the card’s compliance with DirectX9, OpenGL 2.0, HDTV and Windows Vista compatibility for future game development.
This brilliant card incorporates several of NVIDIA’s in-house technologies to help unleash the potential of your games, and the superscalar architecture will give you deadlier demons, deeper shadows, dynamic lighting, and realistic explosions to immerse you in your virtual universe. Gigabyte’s Silent Pipe II technology allows you to vent heat from your case through the heatsink to provide more efficient cooling. You might say this is a cool card for a cooler price. Get some!

Learn more about the GIGABYTE GV-NX76T256D-RH

Pros: Silent. No moving parts - no fan! The passive heatsink and heatpipes do a great job of keeping the GPU cool. You could buy a 7600GT with a fan at the same price - but why would you?! Also doesn't need any external power.

Cons: The obvious, it takes up two slots. Not so obvious, the heatsink on the back might interfere with the layout on some motherboards. Just make sure you've got clearance before you buy.

Overall Review: Your case will need to have a bit of a vacuum (most do) to draw cool air into the case through the heatsink for the best effectiveness.

Pros: Although i was never able to fit the card in my case, I believe that it is a great buy. The specs indicate that the card offers superior performance while maintaining low temps and virtually eliminating all noise. For a video card to possess these three properties is simply remarkable.

Cons: That Sony decided to put the power supply for my computer about 1/2 an inch away from the pci-e slot, making this card impossible to install.

Overall Review: Since I was unable to determine the exact dimensions of the card with the heatsink, I measured the card to save future customers the headache which I am now experiencing. The single heatsink on the top of the card measures exactly 2.2 mm but can be compressed to 1.9-2.0 mm. The card also measures 17.4 mm in length and 11.5 mm in width.

Pros: Great card. I am a engineer consultant and it works well with my MCAD (Mechanical Computer Aided Design) software, I can rotate just about any solid image perfectly and with out issue, once I get into .75 gig assemblies with over 20,000 parts then I begin to have quality issues with rotation, but that is to be expected. This card works far better than I ever thought it would. Once in a while I will go to a LAN party with my work computer, and I have the best graphics of everyone else, and I can play with every think on MAX with no problem. I think this is a great card for the money.

Cons: The only think I would point out as a concern to others is the size of the card, but if you give the card a lower rating because of it's size and it does not fit in your case or something then you are just plan dumb and did not do your home work, it is not the cards fault you did not do your homework.

Overall Review: I will be either buying a new motherboard and get a second card and make a SLI out of it, or upgrade to a new DX-10, I am not sure yet but if I had a SLI board now I would be buying a second card. The think holding me back is I would have to upgrade my board and reinstall windows.

Cons: Big! I guess the price you pay for quiet. Can not run two monitors in DVI mode. Second monitor has to be VGA.

Cons: -Large! Make sure you have room - it is LONG and wide - overlapping a PCI-e slot on my board. It also extends over my northbridge passive heatsink on the MB - not good if you start running hot!

Overall Review: Was looking for an upgrade from a 9600xt for moderate game playing while also upgrading case/MB/Processor. I have a case with only 3 fans (Sonata II case fan + processor heat sink + power supply fan). This graphics card idles ~40C and after 1+ hours of gaming peaks at 51C.

Cons: This thing is big. As long as your mobo conforms to ATX specs, it should clear your chipset heatsink and other components. But it does consume two slots.

Overall Review: This card's cooling depends on having sufficient cool airflow in through the vents on the back of the card. So you probably want more CFM of exhaust fans than intake fans for your case. You might also want to tape over (or otherwise close off) any "gills" that your case has, to ensure that sufficient air intake comes through the card.

Pros: Awesome overclocker with low temps if you have good case cooling. Runs CoD2, Counter-Strike Source, HL2, Call of Jarez (SM2), Splinter Cell:CT, Doom3, Condemned, DoD:S - MAXED.. with playable framerates.. Most of the games never drop under 40fps. I overclocked mine to 610/810 and doesnt go over 63C under load. I will overclock more when I get a new PSU.

Overall Review: Make sure you have atleast a Pentium 4 3.0ghz+ processor or you might experience bottlenecking in games. I used to have a Celeron D Oc'ed to 4.3ghz and then got a Pentium 4 at 3.6Ghz and noticed a 20-50fps boost in most of my games.

Cons: As you can tell in the picture, it takes up two slots for the fanless cooling. Buy a large case with proper air flow, along with a decent motherboard; GA-M57SLI-S4 leaves the bottom PCI slot open, with a space in between the cards for the SLI bridge supporter.

Overall Review: I wouldn't upgrade to one of these, I would upgrade to two. At this point you should have SLI, about doubling the performance of the card if you believe what they say. This is why the card is so cheap; you buy two, and you're up to the usual price for an AGP video card, but with twice the performance. Not a bad plan.