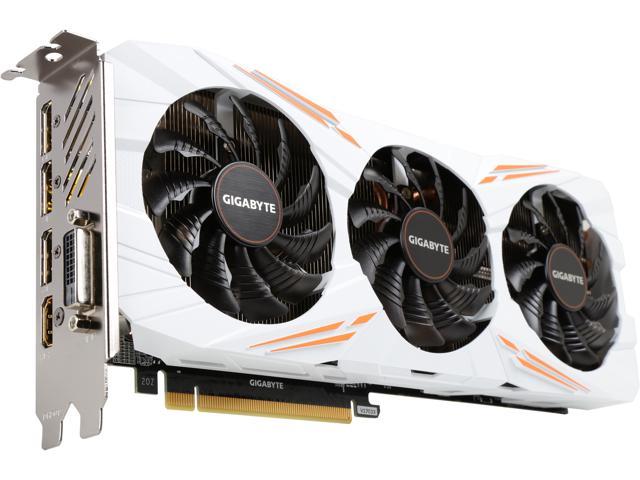 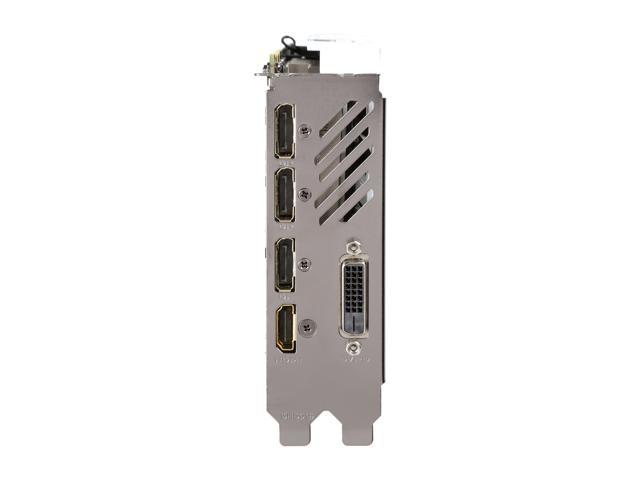 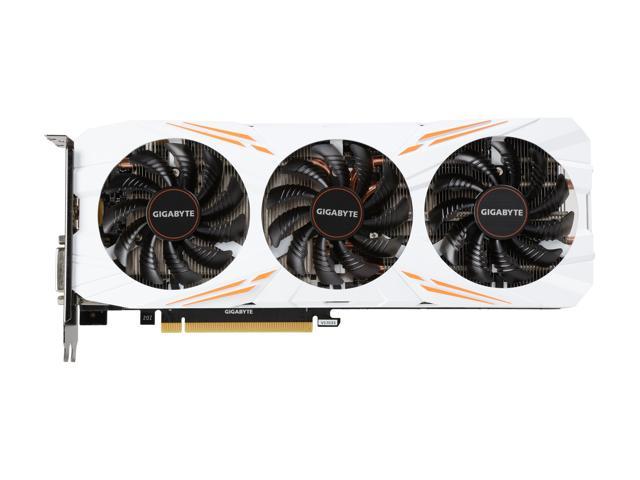 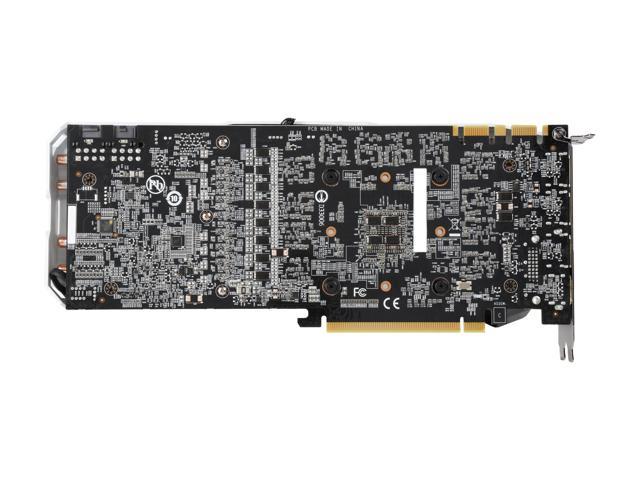 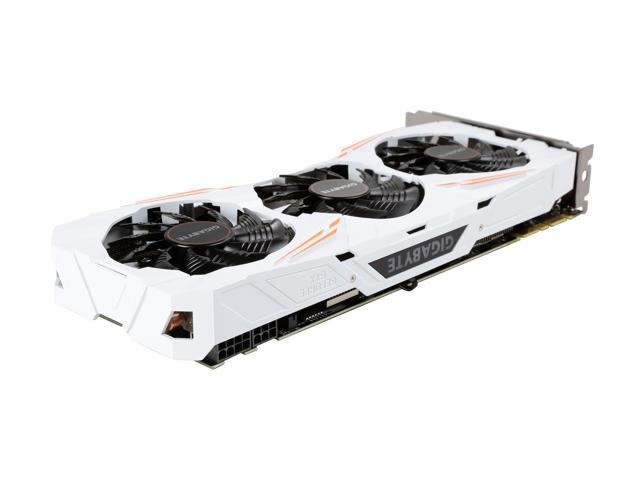 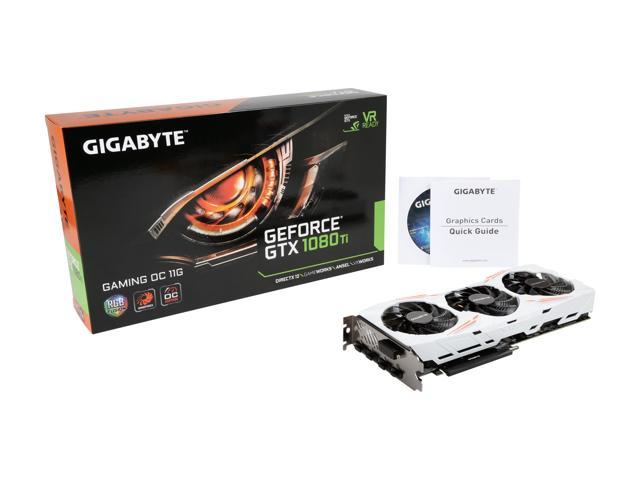 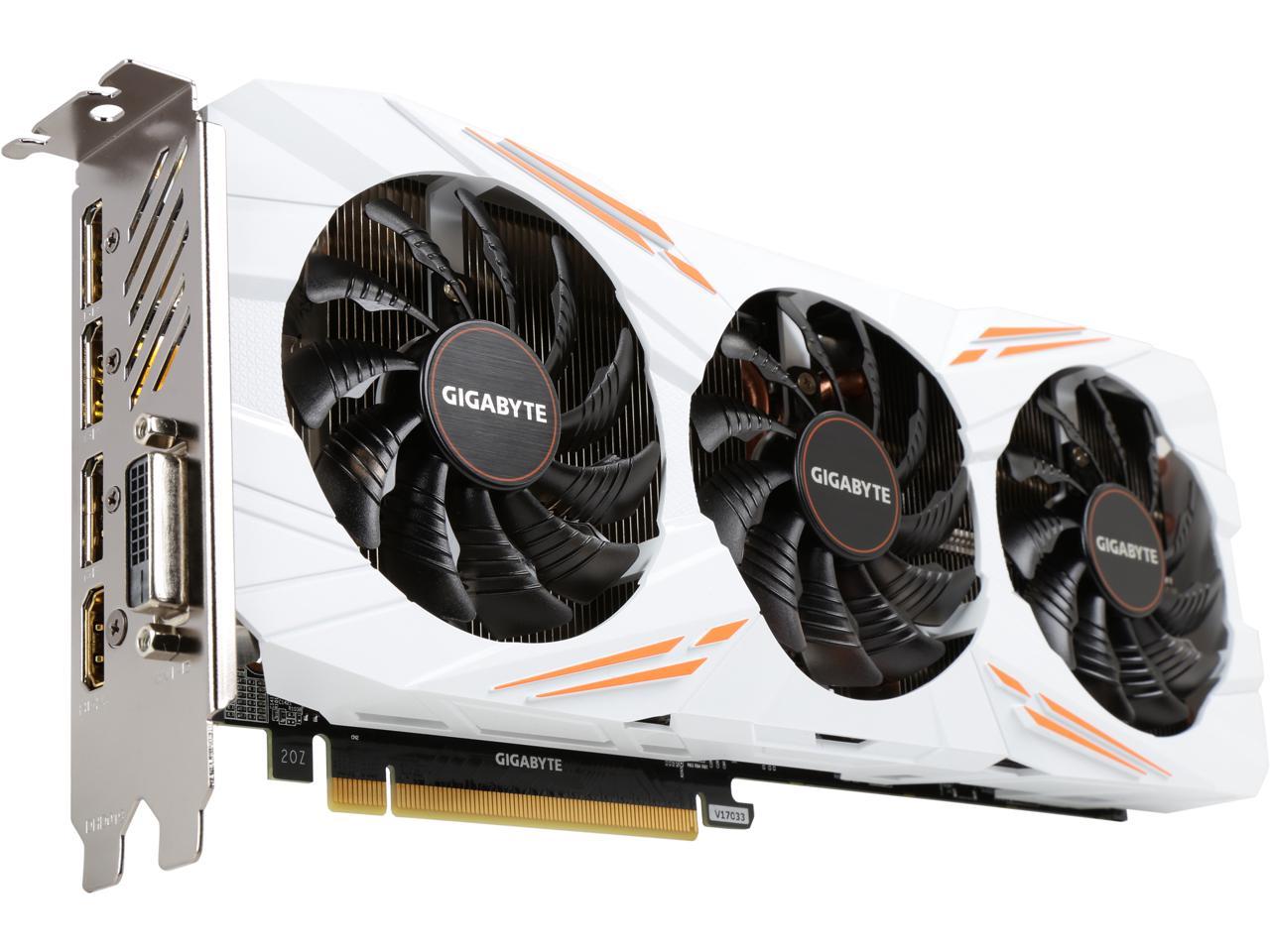 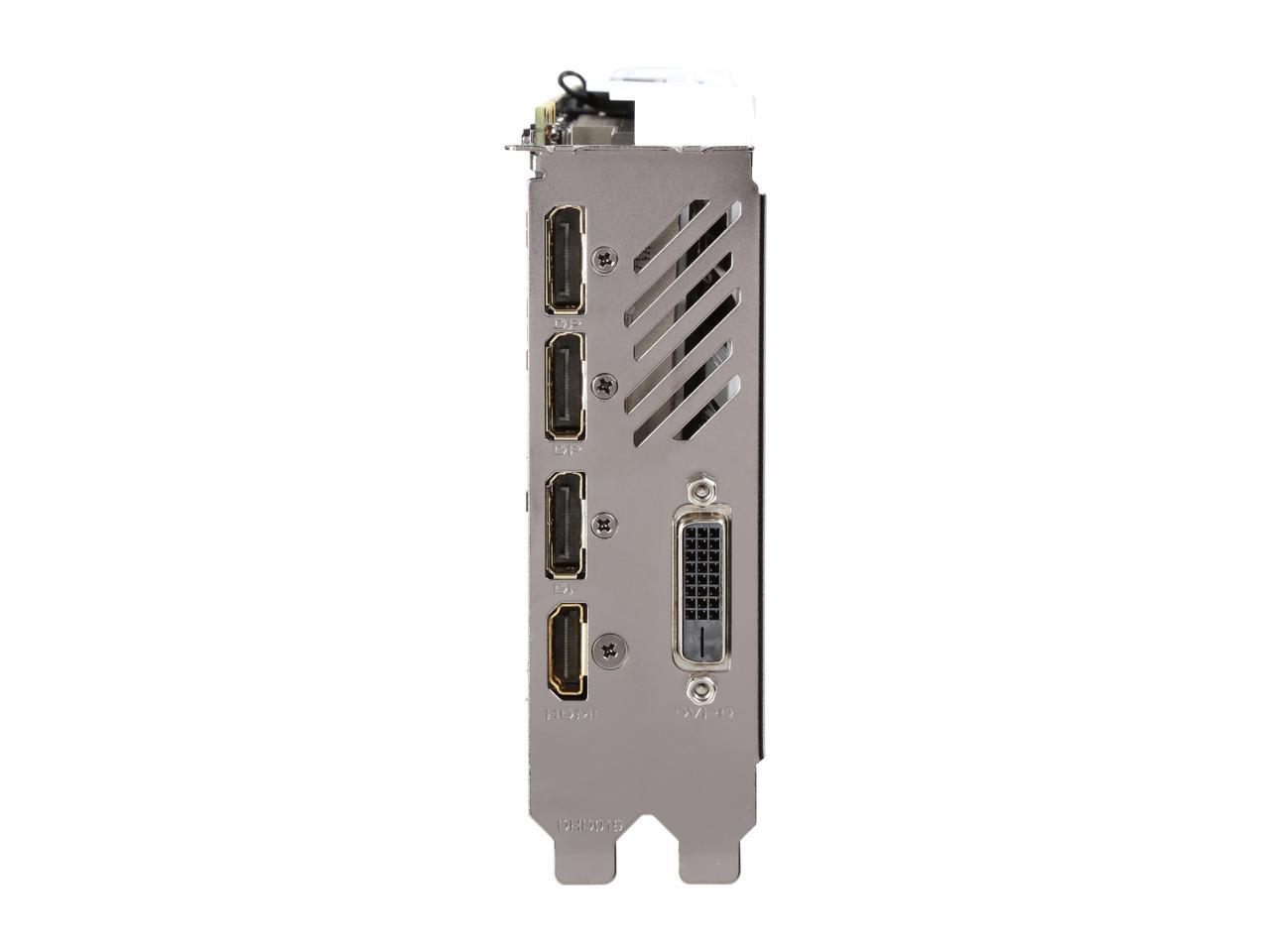 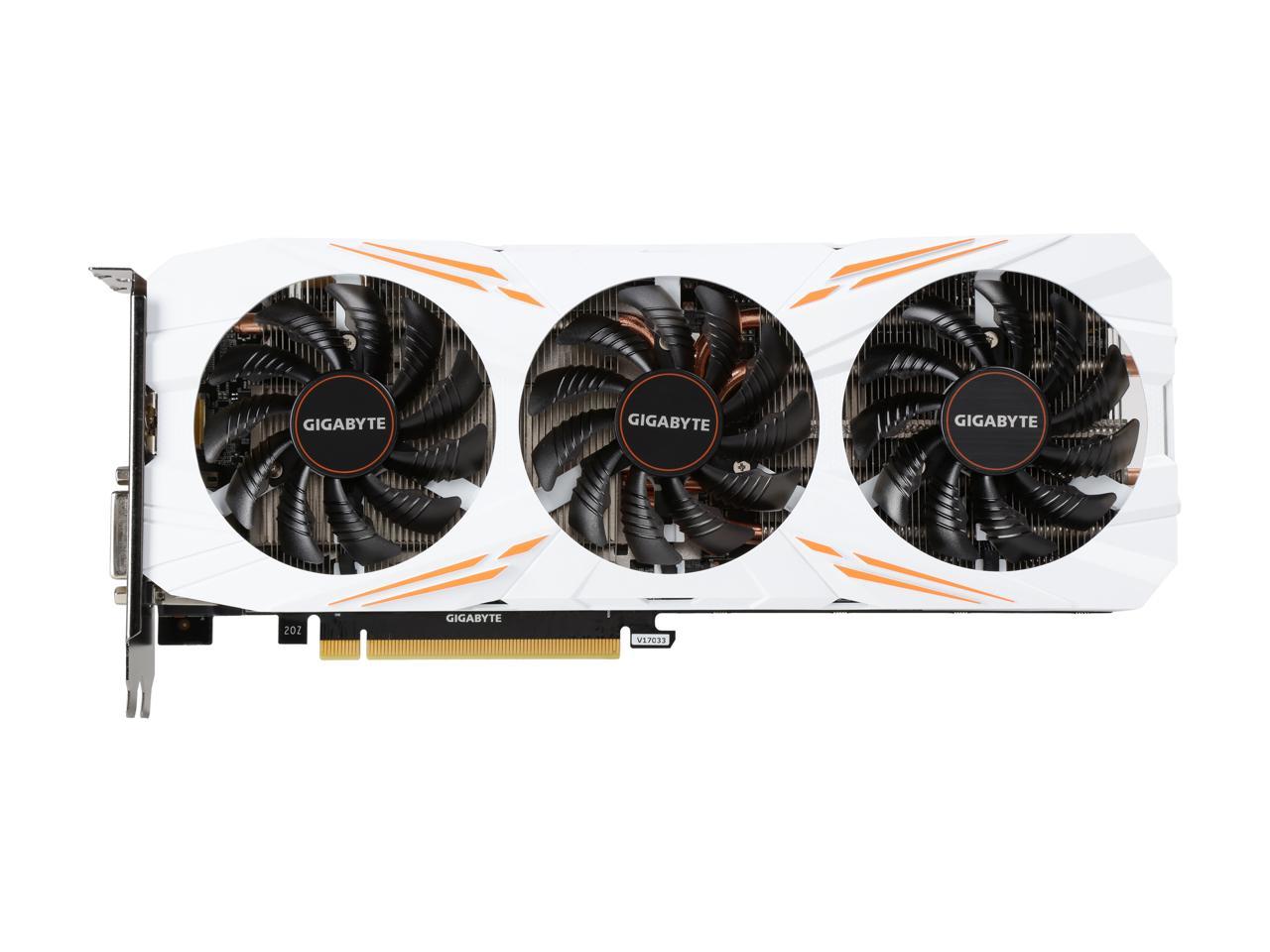 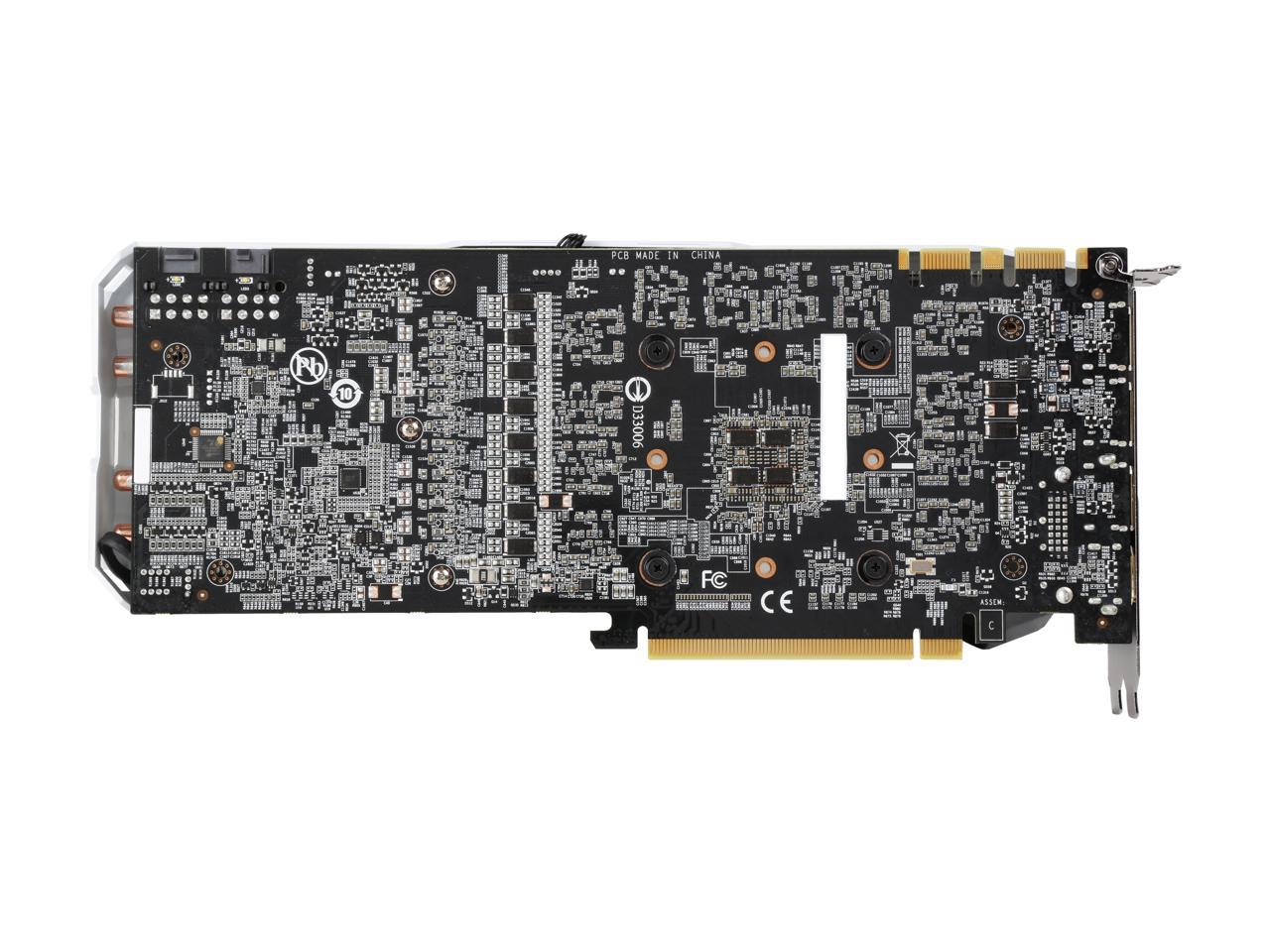 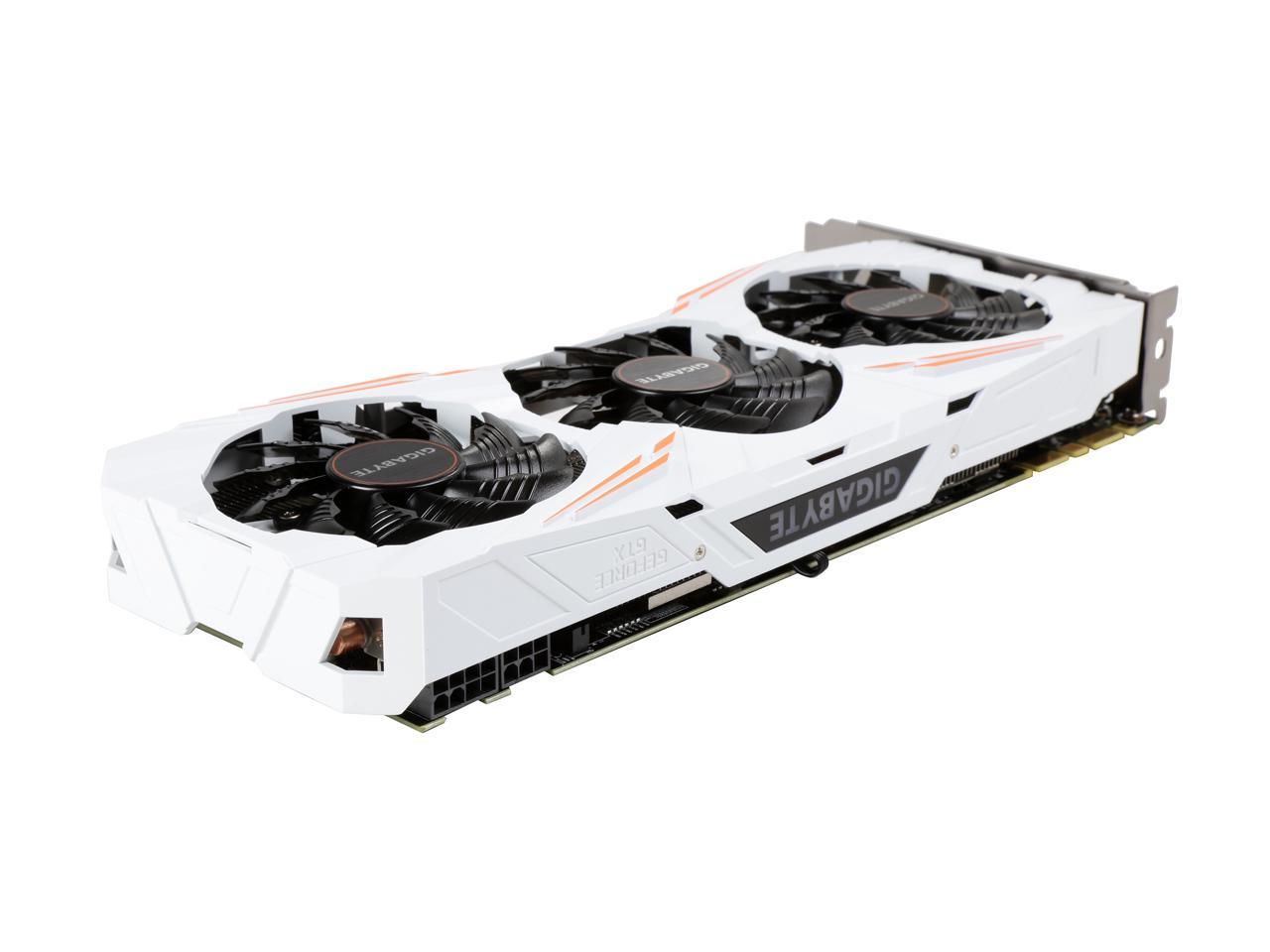 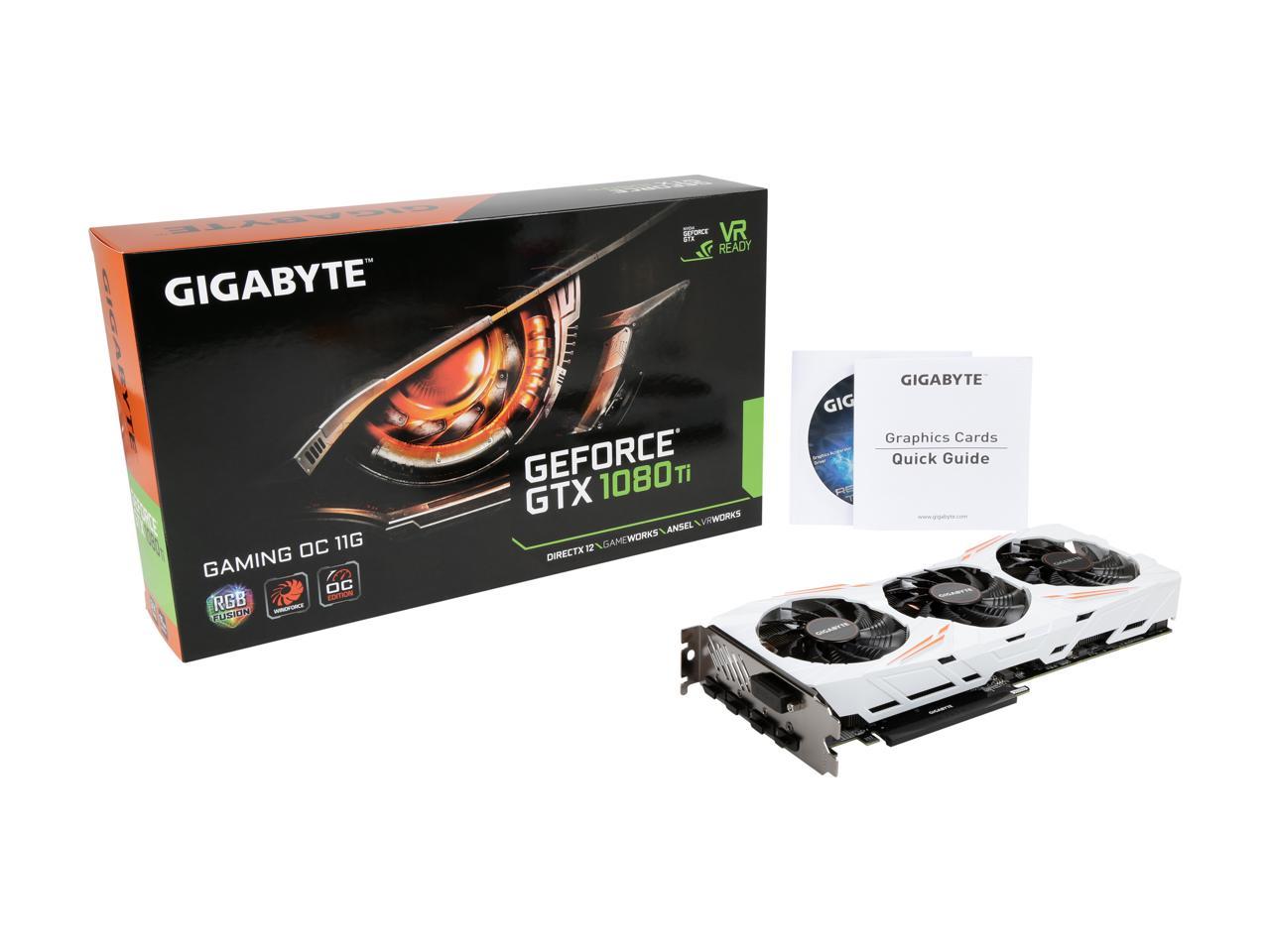 Be Different. Be Unique.

Dare to stand out with a clean, white build in style. Crafted in elegant white finish with orange accent, the GTX 1080 Ti Gaming OC is a perfect match for those who are building not just a gaming rig, but rather a stunning masterpiece. Overall Review: I bought this card even after hearing people complain about coil whine. I've played with the side of my case off, in my quiet basement, and without sound going and have barely even heard the fans. The customizable "GIGABYTE" logo on the side is a nice touch. Couldn't ask for a better 1080Ti.

Cons: The packaging comes with nothing but the GPU, a small manual, and a driver disc. You pay $700 and don't even get any adapters. The shroud on the card is made with plastic. You can buy $300-$400 cards that come with metal shrouds AND back plates. To make matters worse, the first thing you hear when you fire up a game is not the fans spinning but an extremely audible coil whine.

Overall Review: Stay far away from this card. Spend the extra $25-$50 and get a better built card.

Manufacturer Response:
Dear Customer, Thank you for your comments. We apologize for your difficulty with your GIGABYTE product. Please contact us at support-newegg@gigabyteusa.com with the case number 159516 in the e-mail subject line. We will provide personalized service and analysis to help solve your issue ASAP. If the matter is urgent, please send us your contact number, and we will contact you. GIGABYTE VIP Support Team
steven m.
Ownership: 1 day to 1 week
Verified Owner
Very pleased so far4/11/2017 8:01:51 AM

Pros: Meets my needs and then some. I recently upgraded my TV to 4K HDR and I use this card in the hybrid gaming/HTPC that goes with it. I mostly play fighting games that I could previously not run at 4k with adequate frame rates. That is no longer an issue, but I could likely have achieved that with a number of other lower tier cards. I have been running Nier; Automata at 4k maxed out for hours (literally 6-8 hours straight) without issue and it is truly stunning. I don't think twice about maxing out settings on anything I play. I don't overclock and have no intention of going beyond factory OC in the future, as most of what I play will not likely require it. This card is right where I'm at as far as wanting a top notch card with the features I want but none of the over-the top extras you might expect from the auorus (sp?) or heavier OC'd cards available at the moment. I think of it as a sensible sports car. I don't think its for the hard core enthusiast, but it should be pretty future proof for the foreseeable future and maxes out settings with ease.

Cons: The fans definitely need to run to keep this thing cool, but so far I have not experienced any throttling even after hours at 4k maxed out. The fans move a lot of air so the noise is noticeable, but I do not hear anything I wouldn't expect to hear (coil whine, etc.) The card runs a bit hot, but not excessive. It should be noted that as I use this in an HTPC, it is installed in a somewhat crowded "silent" case (Fractal Define R2) that is not totally ideal for managing heat. This case is insulated with foam and while I run several case fans, I keep the airflow pretty low to keep noise down. Airflow is somewhat impeded by the added shrouding meant to keep the noise down, and I also keep the unused fan mounts blocked off, giving hot air nowhere to go but the one exhaust in the top-back of the case. The noise and heat I experience are all within what I would expect given the install and the way I run the machine.

Overall Review: Although I've upgraded to this 1080ti, the cpu its paired with is still an old AMD Phenom 6 core that I know runs hot as hell when pushed (not helping the case heat). I've still had no problems with bottle-necking or thermal throttling, so I will leave well enough alone for now. For reference: so far the loudest I've gotten the GPU fans to run during use is no louder than the old xbox360 I have setting right next to it (as heard by me sitting on the couch about 8 ft away). Not sure what it would sound like without the silent case. I think this is a great consumer level card. I chose it because I have had great experiences with Gigabyte products in the past (GTX 970 G1 gaming in my other machine, a couple of old mother boards that just won't seem to give up after over 5 years of abuse), and I don't feel the need for a more aggressively OC'd card.

Pros: - Does exactly what its suppose to do... Runs absolutely every game to its best visuals. - Quite - No bottle-necking

Cons: - Lighting is dull, though its not like you're going to want to look at it while gaming . - Card's too heavy for it's own good (it sags). would suggest picking up a GPU Brace. - Out of stock at time of writing

Overall Review: Overall happy with the card... the color, performance, and the $650 I spent on it at the time of purchase. Great buy for a first time builder (If it ever becomes available again and is on sale).

Pros: Great card, I've been using it for over year and half now. No issues. All games run nice, very quiet.

Pros: It's white! It's also orange... Hopefully that is changeable via RGB. The price compared to the FE is great. It's over clocked already. Time will tell how much more it can be overclocked?

Cons: 1x6 pin and 1x8 pin. I wanted more power to overclock later when I buy a waterblock for DIY. I was originally waiting around for the Aorus. It sold out before I could refresh the page. So jumped on this. Then, an hour later, the cheaper Aorus was no longer sold out??? Wished there was more competition with Newegg on high end PC parts.

Overall Review: So now I have the most powerful PC build possible without going SLI. All white build. Looks striking with RGBs.

Pros: This card is nothing but pure power.... upgrading for a 780 gtx (RIP) that burnt out i was anxious to get a card that would perform just as good or surpass it. With so many choices out here it was a bit confusing on which TI i should go for. After much research i finally decided on the Gigabyte GTX OC edition. This was based on 1. I would be upgrading to a 4k monitor some where down the line, this card should more than suffice to push it. 2. Gigabytes Aorus software is very user friendly and i can change modes to gaming from silent simply with a mouse click. 3. So far every game i have thrown at it has exceeded my expectations. I am a gamer so i have run Doom, GTA 5, , Witcher 3 with hairworks on and The Division. NO. PROBLEMS. AT. ALL. All games have been set on ultra/ max settings. I am running a core I7, @6700k 4 ghz, 16 gigs of ddr 4 corsair ram and a GA-Z170X-Gaming 7 mobo. While my rig most certainly helps achieve this performance i can confidently say that i have seen a huge step up in performance from my 780 gtx. 4. I tend to be a bit paranoid about pc parts burning out (rip 780 gtx) so the fact that this card has 3 fans and from what i have seen it does keep everything alot cooler which makes me very happy. I do not hear the fans at all even in OC mode. So yah i am loving the windforce design 5. Ok the white color of the card matches my motherboard.... also it has RGB.... yah i like to look at the pretty lights and see the matching color with my motherboard..... shoot me. 6. I got a free game with it! Destiny 2 here i come!! When it is released....

Cons: Whats up with the orange stripes by the fans?.... not that it matters i cannot even see it when it in my tower. The whole shell of the card seems to be made of the cheap white plastic material. I am guessing that this was done purposely for heating issues. Its a big card, make sure you have space!

Overall Review: This is a card to get. If you can afford it i would highly recommend it. If you are one of those people who do not want to be upgrading every year because you cannot run a game at max settings then this is for you. You can safely get this card and be assured that you will not have to upgrade for quite a while.