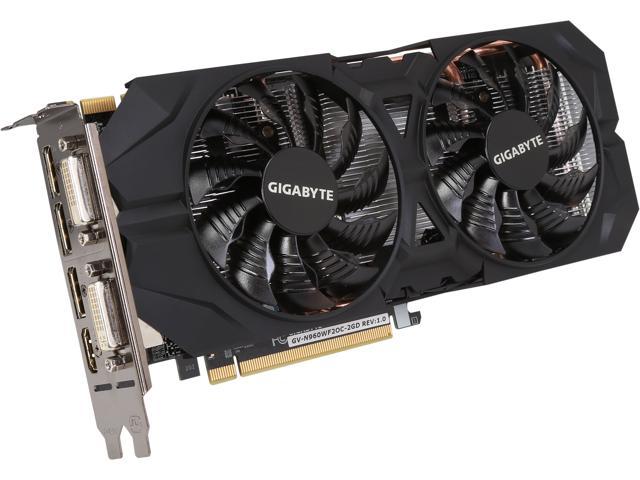 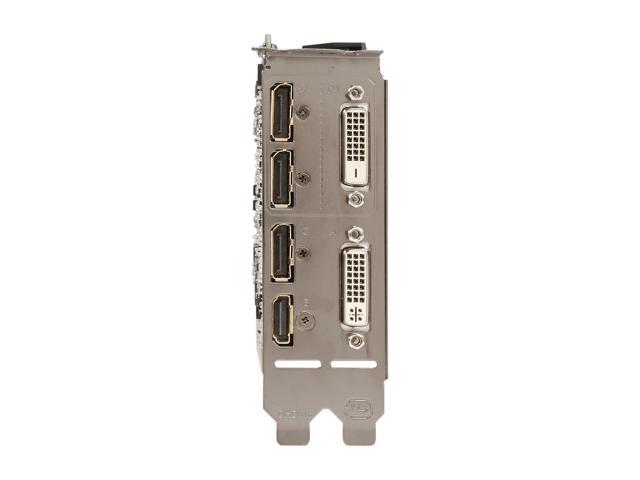 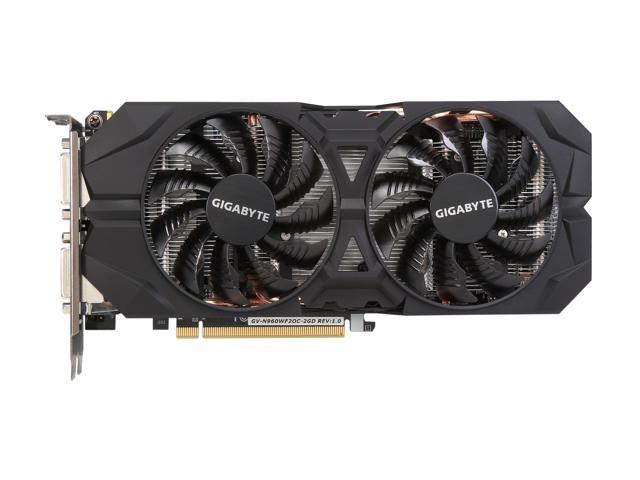 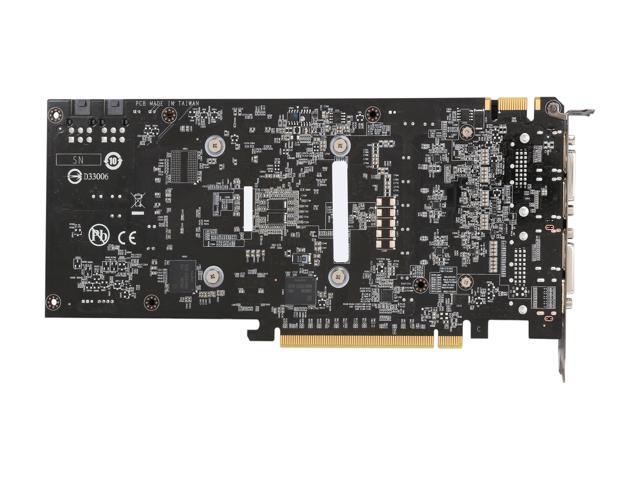 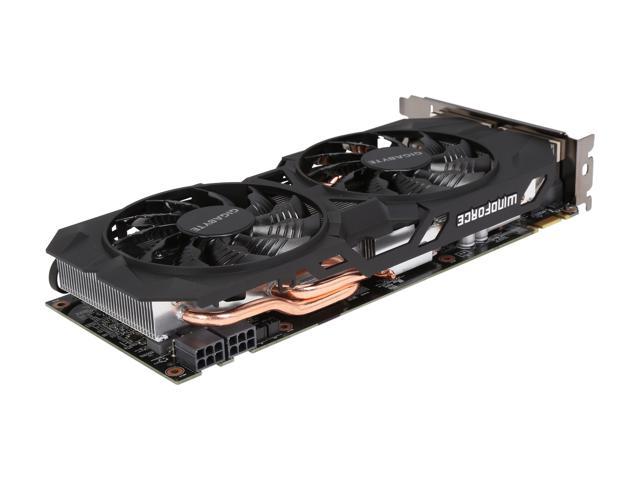 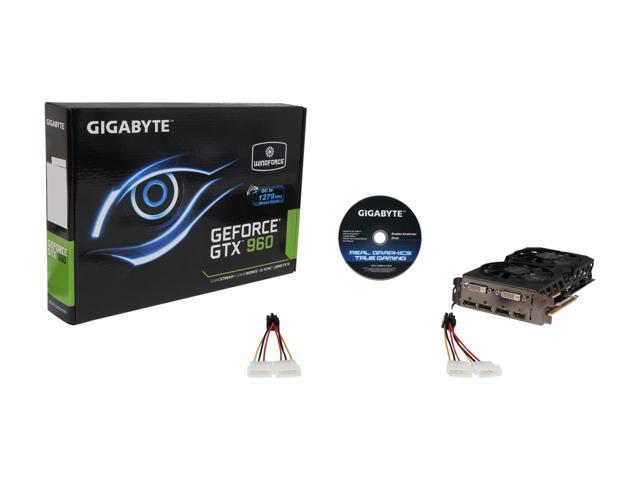 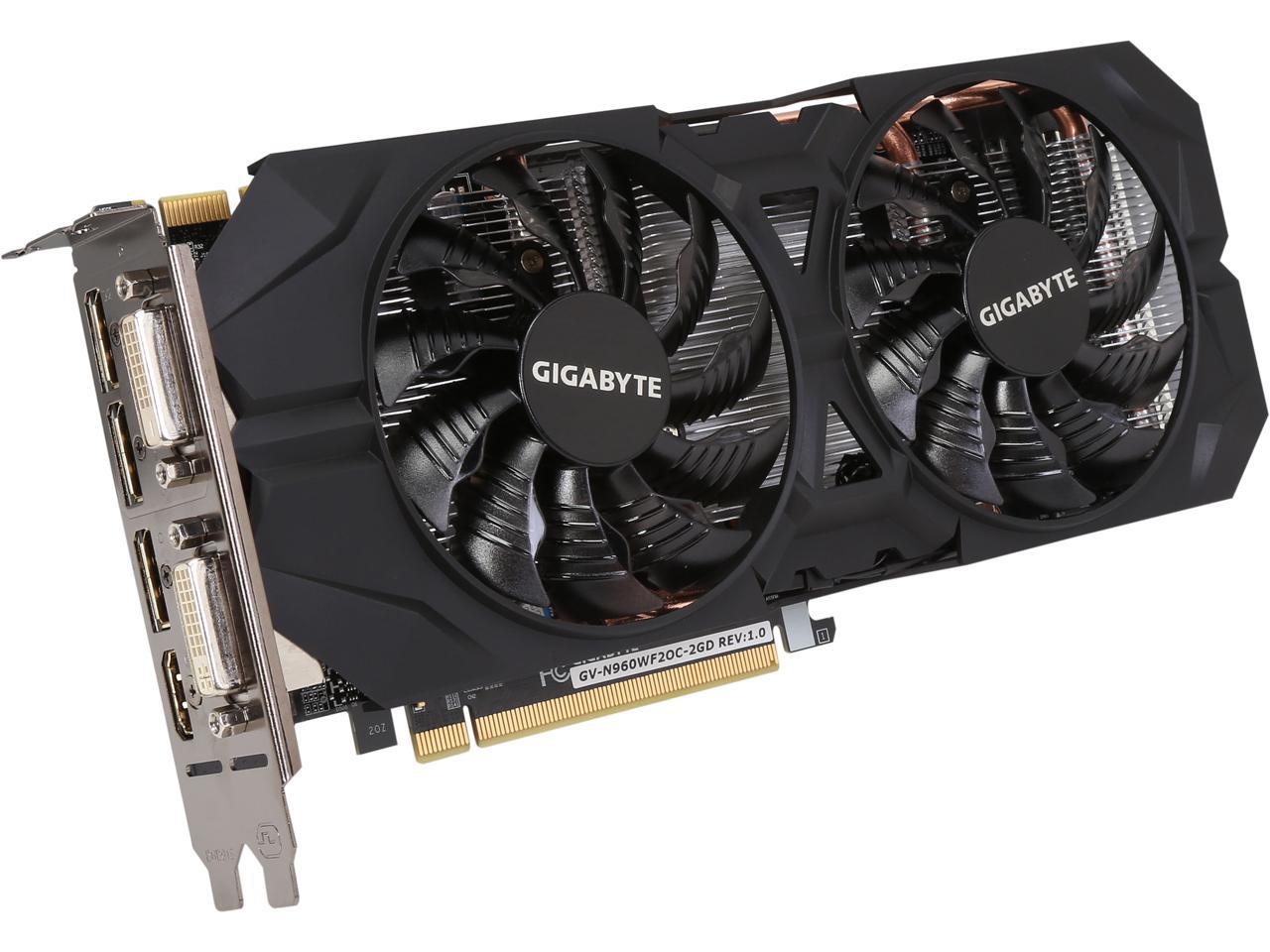 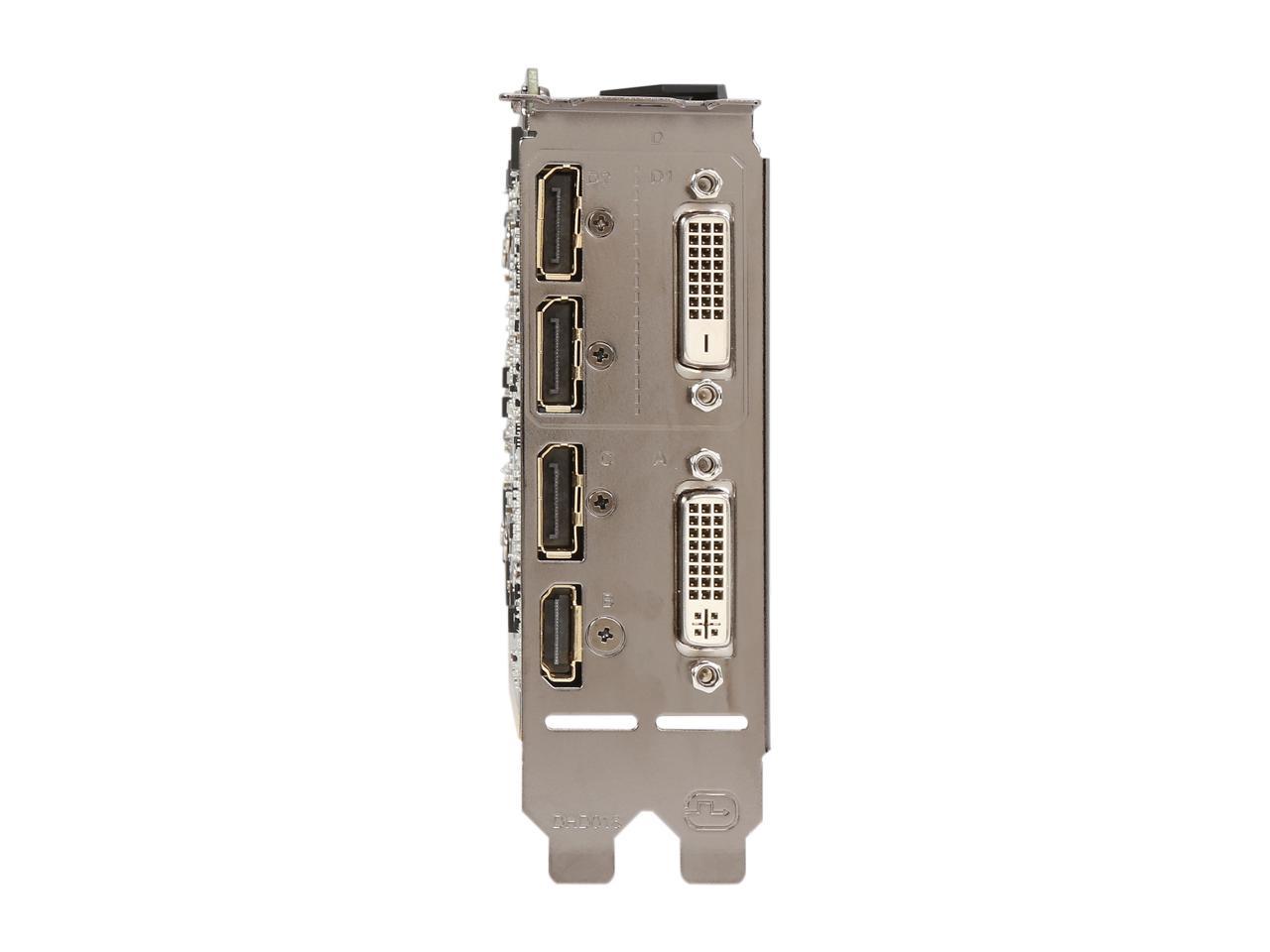 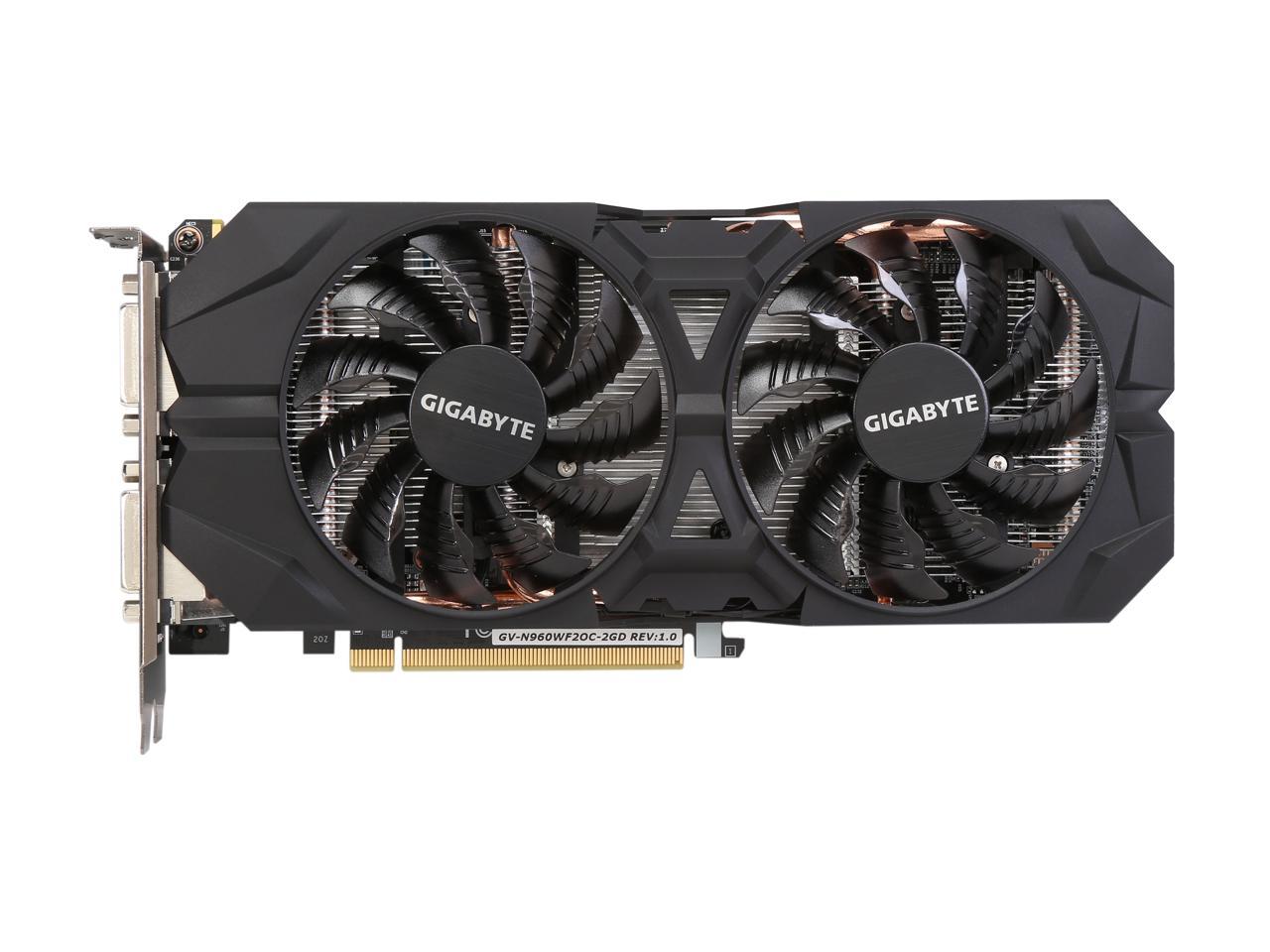 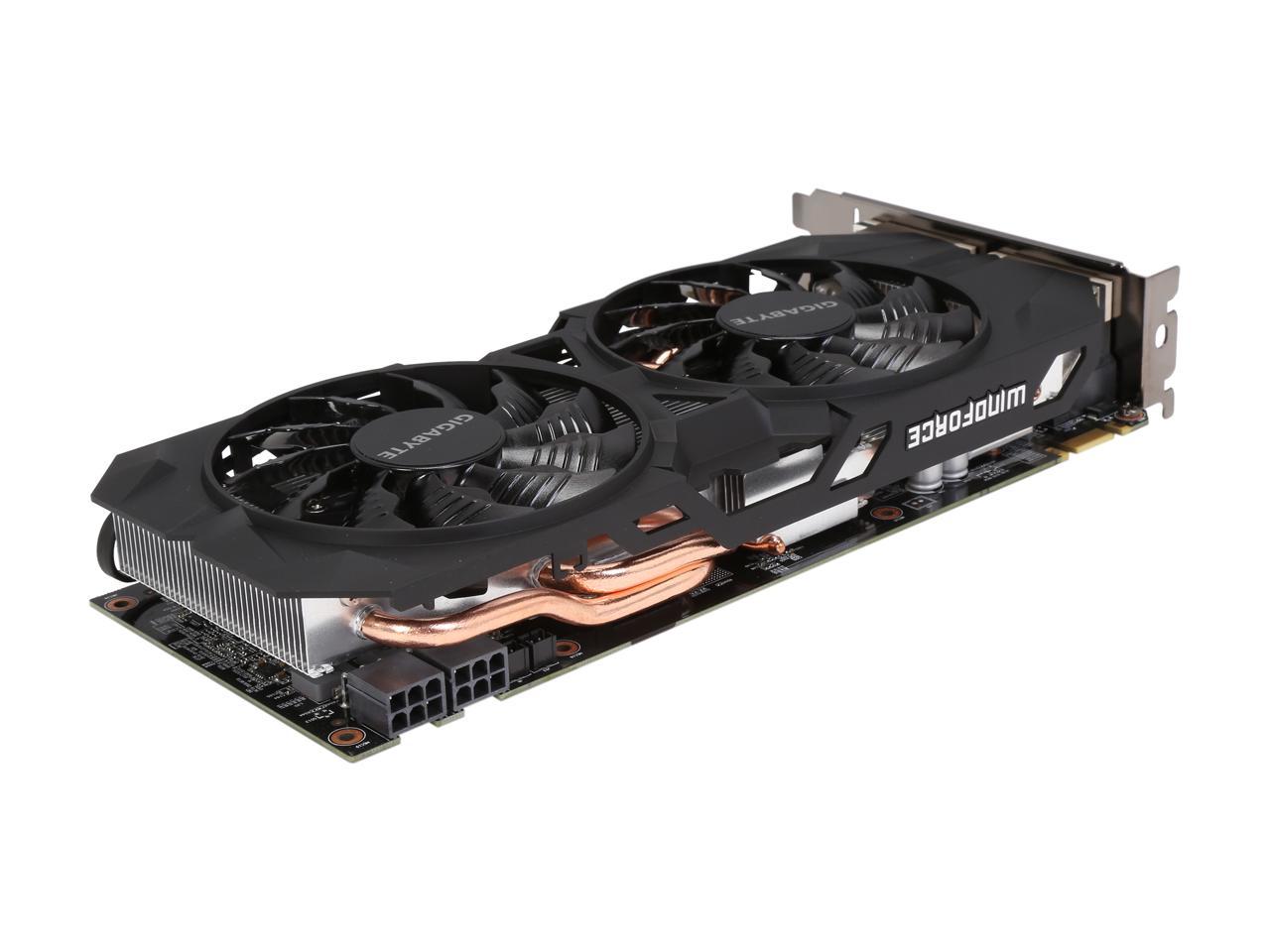 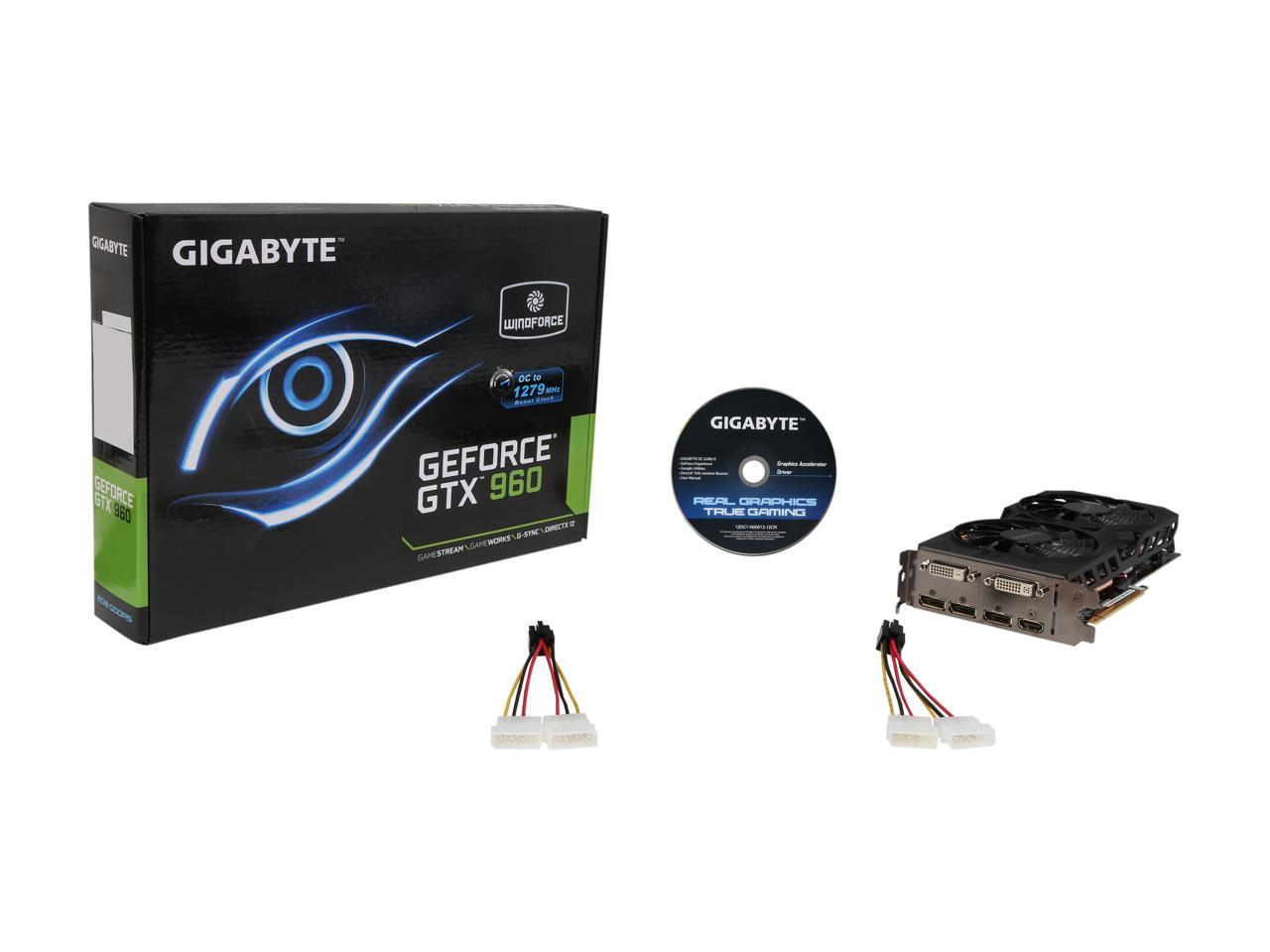 WINDFORCE 2X With Unique Blade Fan
Equipped with two 90mm unique blade fan and three copper heat pipes. The airflow is spilt through the triangle design at the fan edge, and is guided smoothly through the fan by special 3D stripe curve design. At the same time, it effectively enhanced the cooling capacity while reducing air turbulence.

0dB Semi-Passive Fans
Featuring the new semi-passive fan design. When the GPU is under a set loading or temperature, the fans will remain off, creating an absolutely silent environment for gamers.

Learn more about the GIGABYTE GV-N960WF2OC-2GD

Pros: -Ability to support up to 4 monitors! -Runs my 3 monitors without any issues at all! -Not loud, in fact I can't really hear much of a difference in my PC -Comes with power cable adapters for older power supplies like mine -It's a graphics card -It does graphics

Cons: -None if you install it correctly

Overall Review: I bought this card to compliment my Asus Z87 and i7 4770k along with 3 monitors. Everything worked right out of the box and my desktop can now run at a resolution of 5760x1200 with hardly any overhead! Games that play on one screen have great framerates. Three screens can be a bit taxing for newer games, but most of everything runs great still. My purpose for this purchase was to use this station as an office/command center, not for games, so I'm very happy with my purchase. For those wanting to focus more on gaming with 3 monitors, I would recommend researching the higher end 980. I was able to get this card running flawlesly with less-than-desired power supply wattage.

Pros: Huge upgrade from my older HD5770. Fast enough to play Fallout 4 at 1080P ULTRA high settings @ 60fps...oh and it does all that seamlessly: no noise, no heat, no outsized power supplies and electrical bills. Also more video output options than most GTX 960s.

Cons: none so far for me, but if you have mini-tower make sure you have the clearance to fit this long card in and will still need at least 400W power supply (it's very efficient, but not magical).

Overall Review: Uses double (6pin + 6pin) PCI-E power connectors (two MOLEX to PCI-E converter cables included) More than 2 Gigs video memory is a waste of money with these 128 bit cards. Most 960 chipset cards are comparable, but Gigabyte has a very solid overall product with a mix of refinement and performance. MSI is nice too, maybe a tick slower but runs even a bit quieter.

Pros: Very good for 1080p gaming, try to get a better card if your going for 4K, this won't work. Got it on a promo for 230 I believe, fantastic for the price. Not too loud, dual fans keep it very cool. Performance: Runs Pretty much any game a max, 60fps Starwars battlefront Beta ran at 55fps at max settings. Phantom Pain runs at 45fps at max settings.

Cons: 2gb Vram, not too future proof if thats a thing

Cons: None, but the two 6-pin PCIe power connectors seem quite unnecessary; one should be enough. However, they are positioned nicely at the end of the card and do not obstruct the side fan on the case, as some of the other cards do.

Overall Review: I only Fold on this card, and don't even have a monitor connected to it, but use my internal Intel graphics for that. So I don't know about gaming, but there are plenty of review sites for that. For me, it is the best card I could have gotten for my use. I was going to wait until Pascal before getting my next card, but just might add a second GTX 960 later in the year to fill the second PCIe slot.

Pros: Got it a week ago, it runs great so far. I like the cooling a little bit better than the EVGA gtx 960, and it works especially great because I have a tiny case. Not as powerful as some of the other cards available, but for the price it's godly.

Cons: None so far, I guess we'll find out if it dies anytime soon.

Overall Review: I'm pretty sure the EVGA card is overclocked a little higher than this one, I'd suggest that one if temperatures aren't a problem for you.

Pros: Well built quiet operation and trouble free performance. This is the best of the GeForce GTX 960 video cards for the price if you get a good deal on it. There's really no need to manually over clock it because it ramps up pretty high automatically. I've been seeing that it jumps to well over 1300 MHz during game play and the graphics in games look awesome. Also the fan design keeps it nice and cool and they're pretty and quiet and only run when over 60 degrees Celsius.

Overall Review: I use mine with a seasonic 430 watt psu and it's a good combination. Also the OC Guru II program is updated on gigabyte's website and supports Windows 10. I've been playing tomb raider 2013 with mine and I've been very happy with how smooth game play is with it. I've also read that this video card is built on the same pcb as the G1 Gamer edition so it has 6+2 phase power.

Pros: This card has given me no issues whatsoever. I play most games on high even some on Ultra or max with little to no drops.

Overall Review: Most people nitpick when it comes to video cards. I run about the same as a 970 on most games. I highly recommend this card for casual gaming. If you want high end go for 980 ti.

Pros: I use MS Flight simulator X and for over 10 YEARS I have been waiting for affordable hardware. went through a 8800, 560, 650Ti Boost, and 750Ti and FINALLY I can turn EVERYTHING on MAX and break 60FPS easily @ 1080p beautiful. (This "game" does not like widescreen settings but that is not the point.)

Cons: Gigabyte, bless their little hearts, give me a CD with NO DRIVER. this card will not work with the 744 driver it needs 746 and it is NOT on the disk. Since I only have LTE internet It cost me $ 4.00 to download it. the disk has Nvidia expierence and a bunch of other junk though. They also offer OC utility, and it crashes no matter how many times I reinstall it in any order so I really should bust you 2 eggs but it is atypical of Gig so i won't.

8 out of 16 people found this review helpful. Did you?