Shop Confidently with 30-Day Hassle-Free Returns
OUT OF STOCK
Sold by: Newegg
Shipped by Newegg
Price Alert
Add To ListFound on 82 wish lists 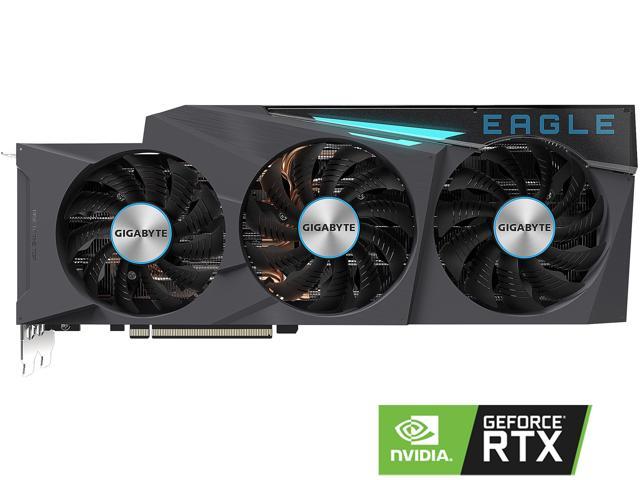 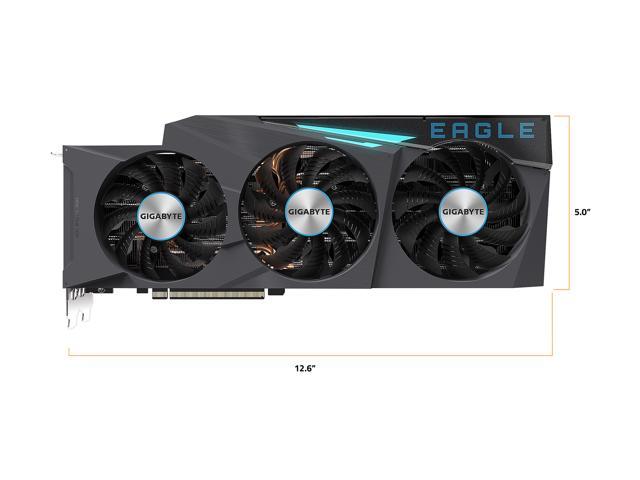 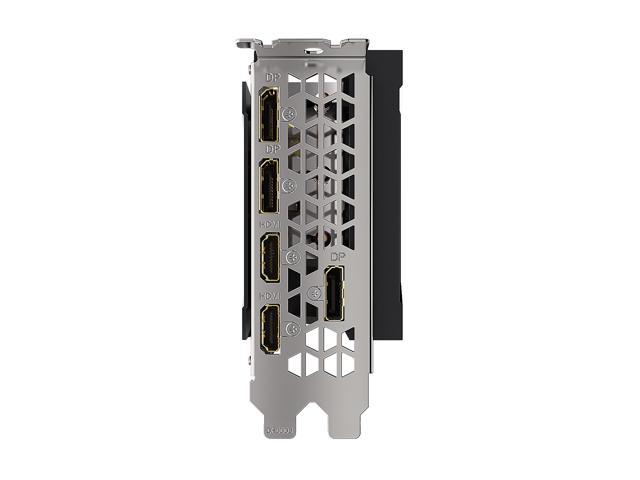 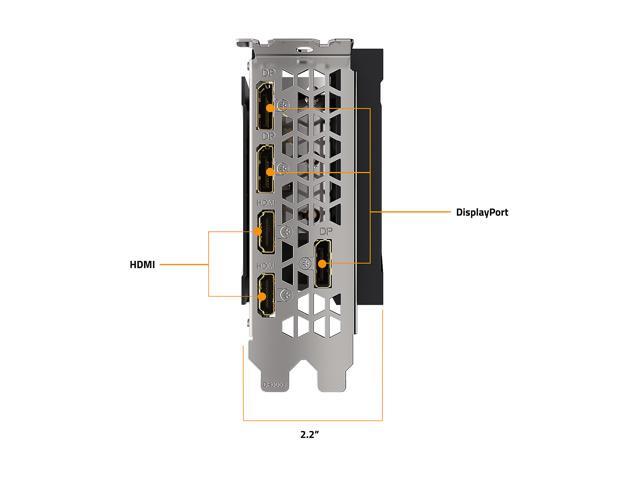 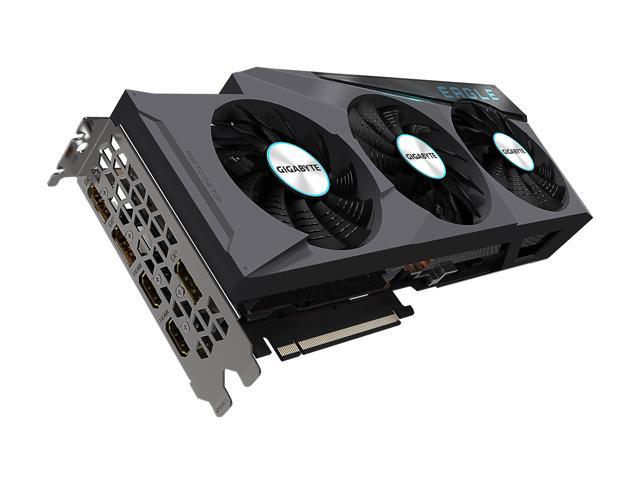 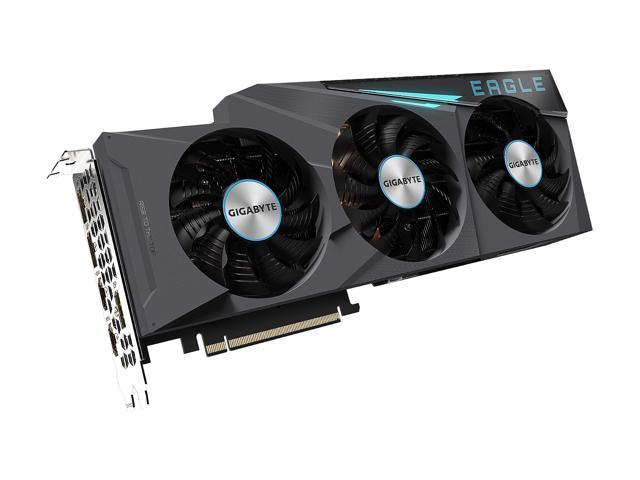 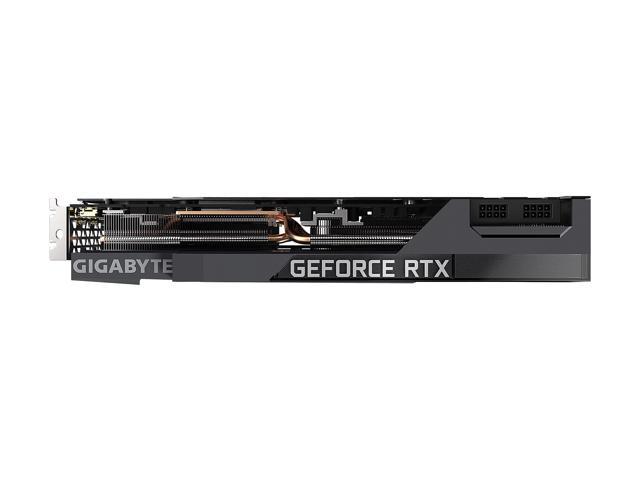 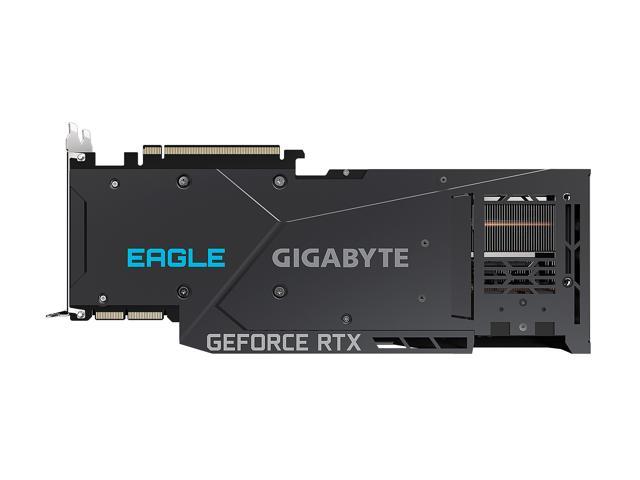 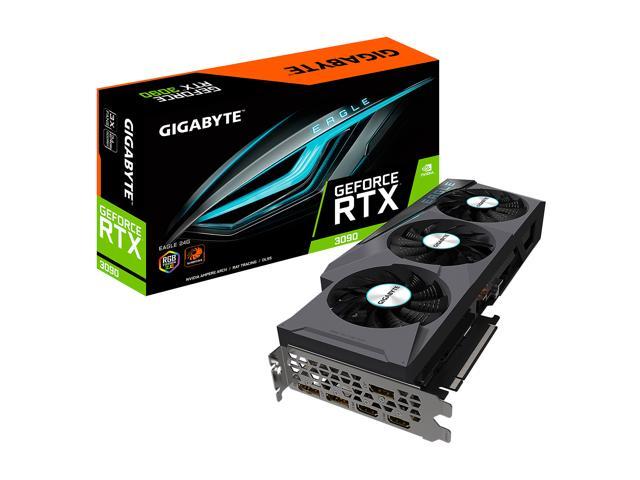 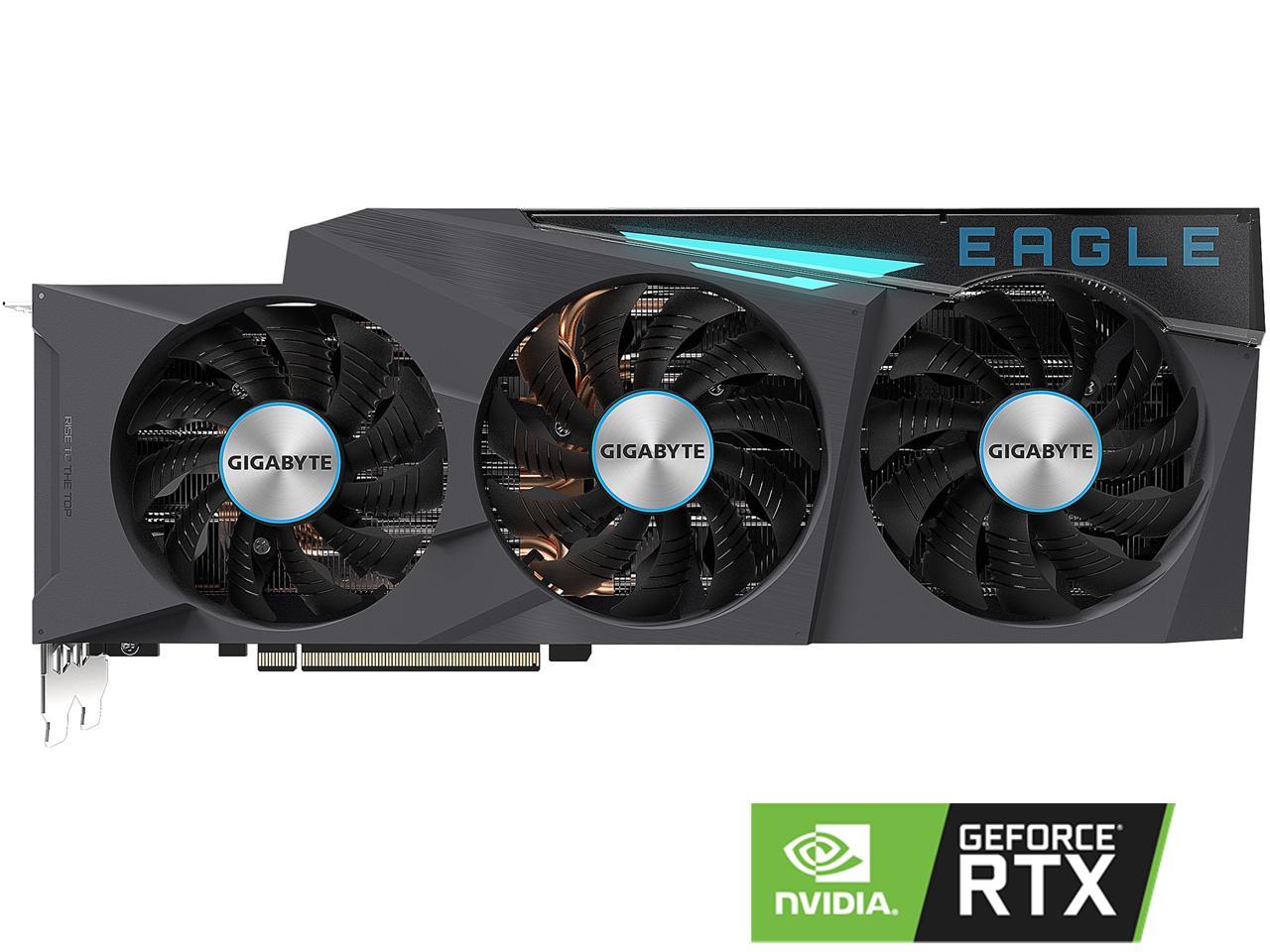 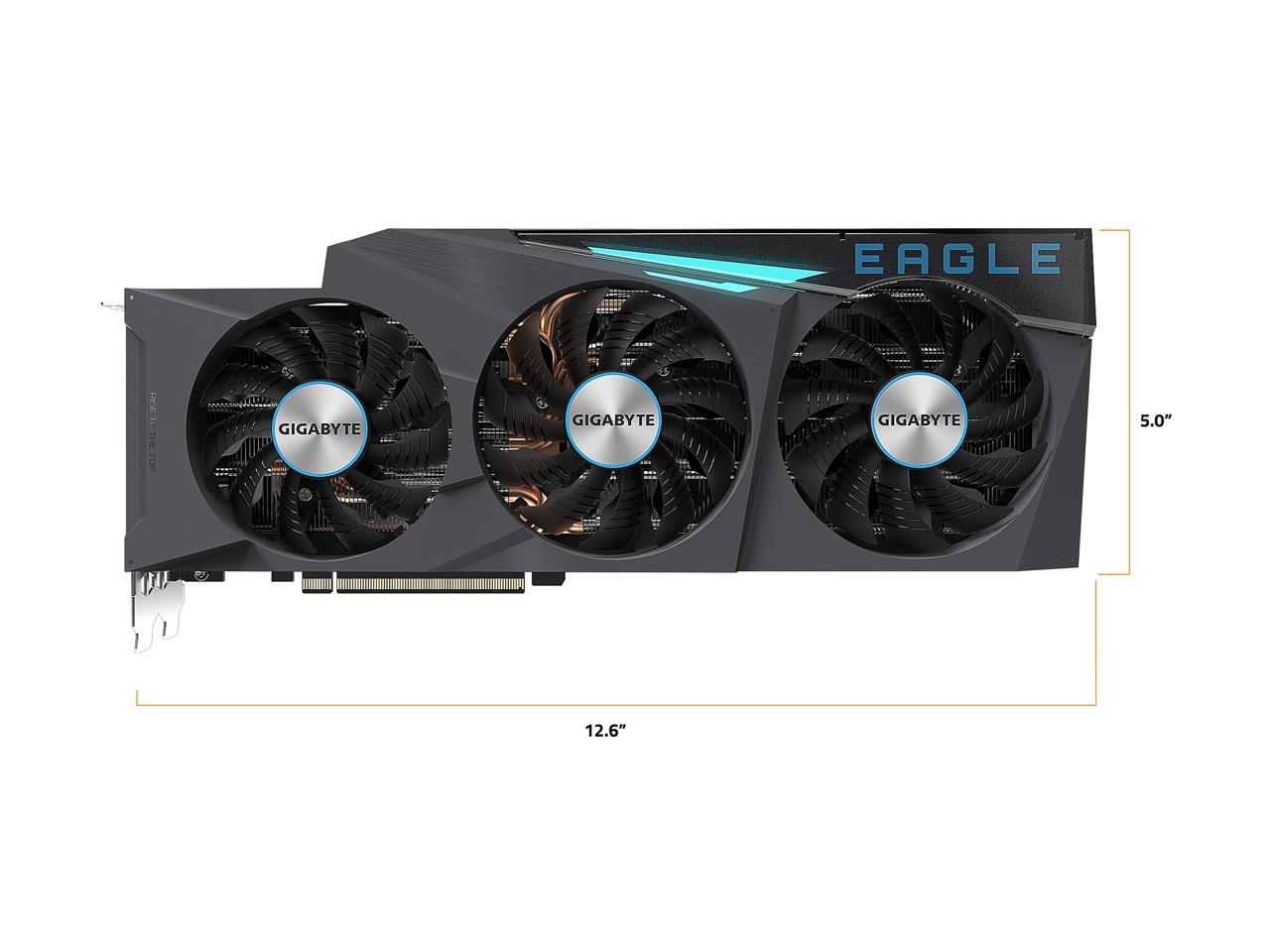 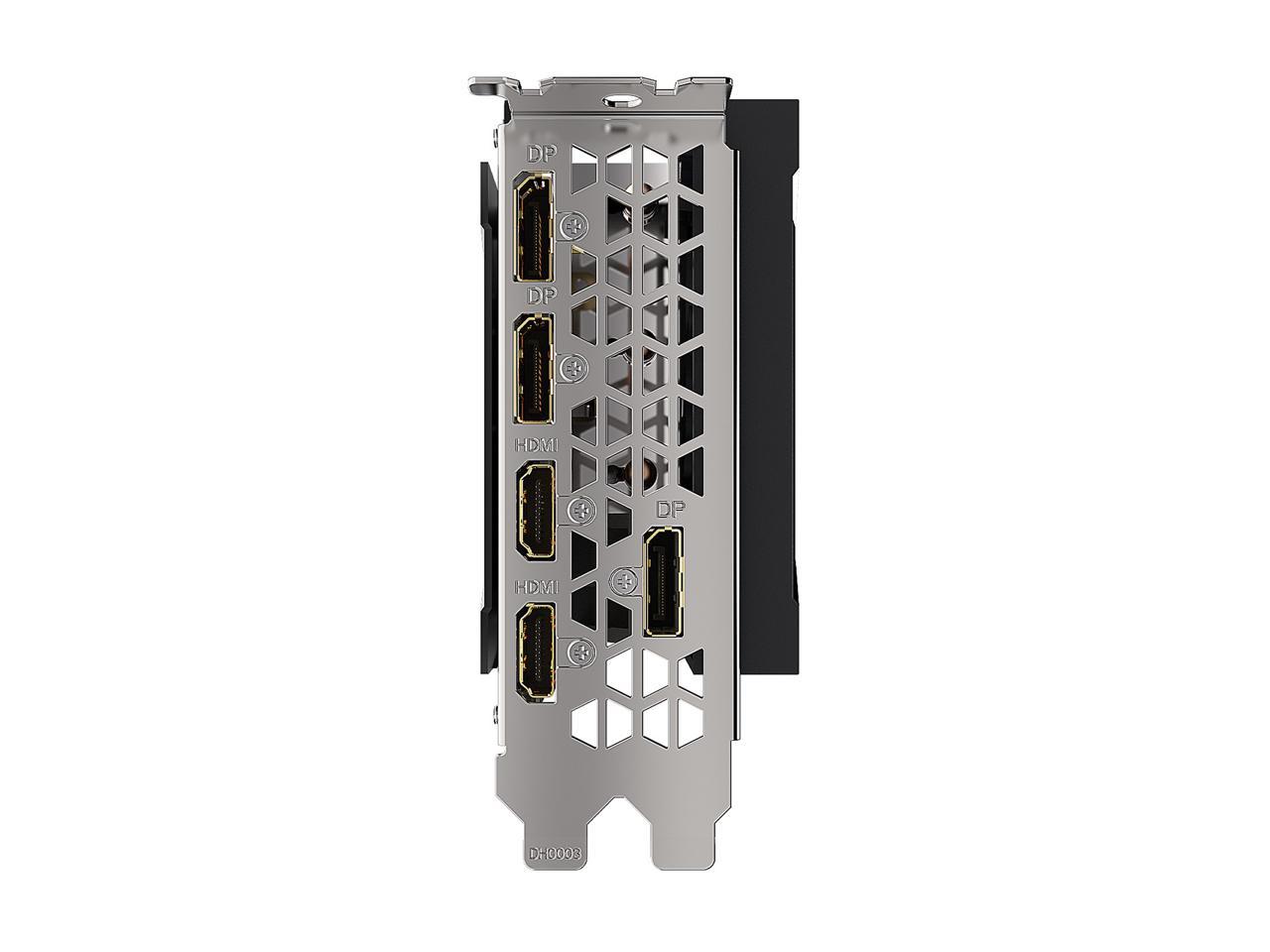 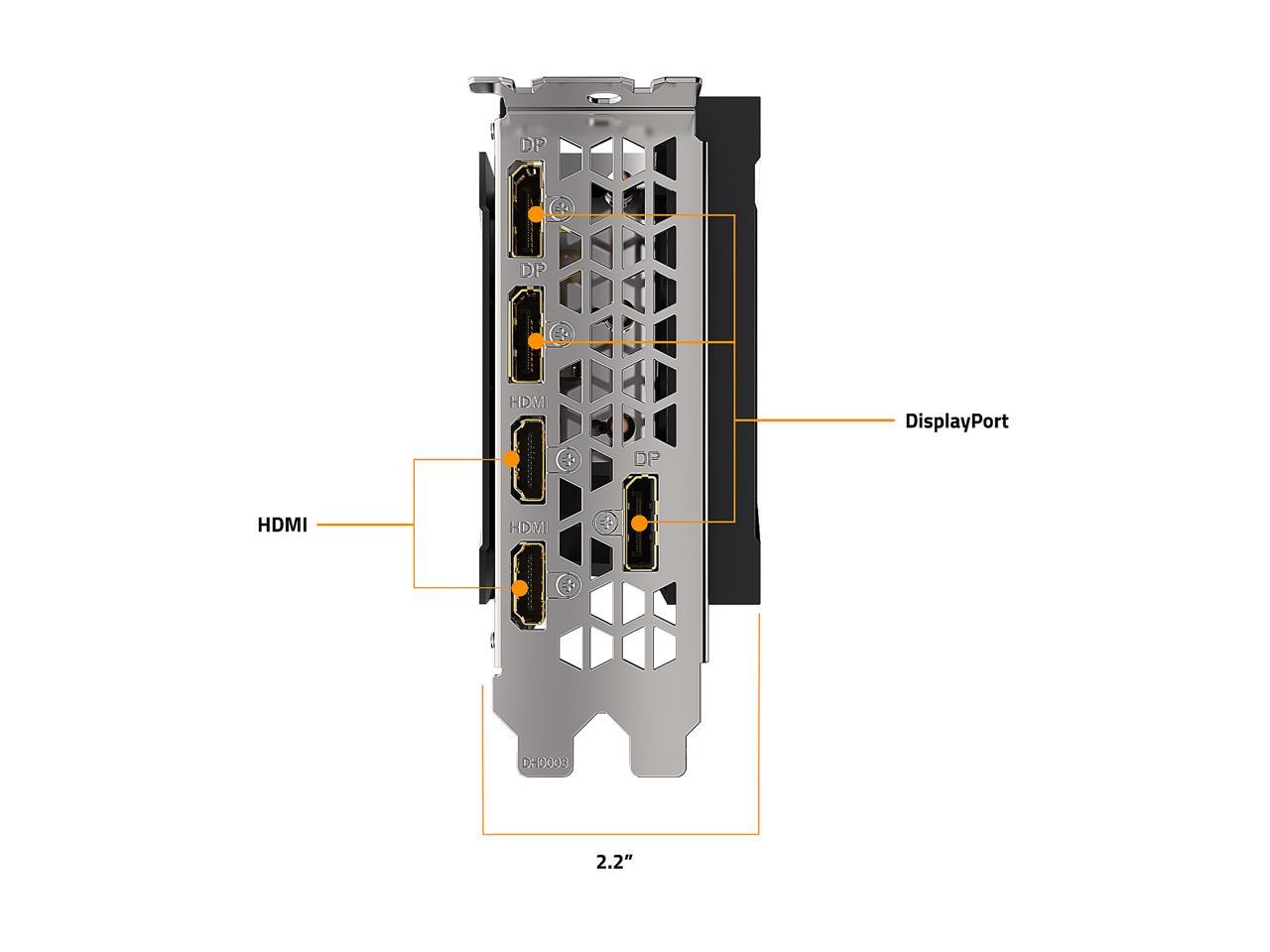 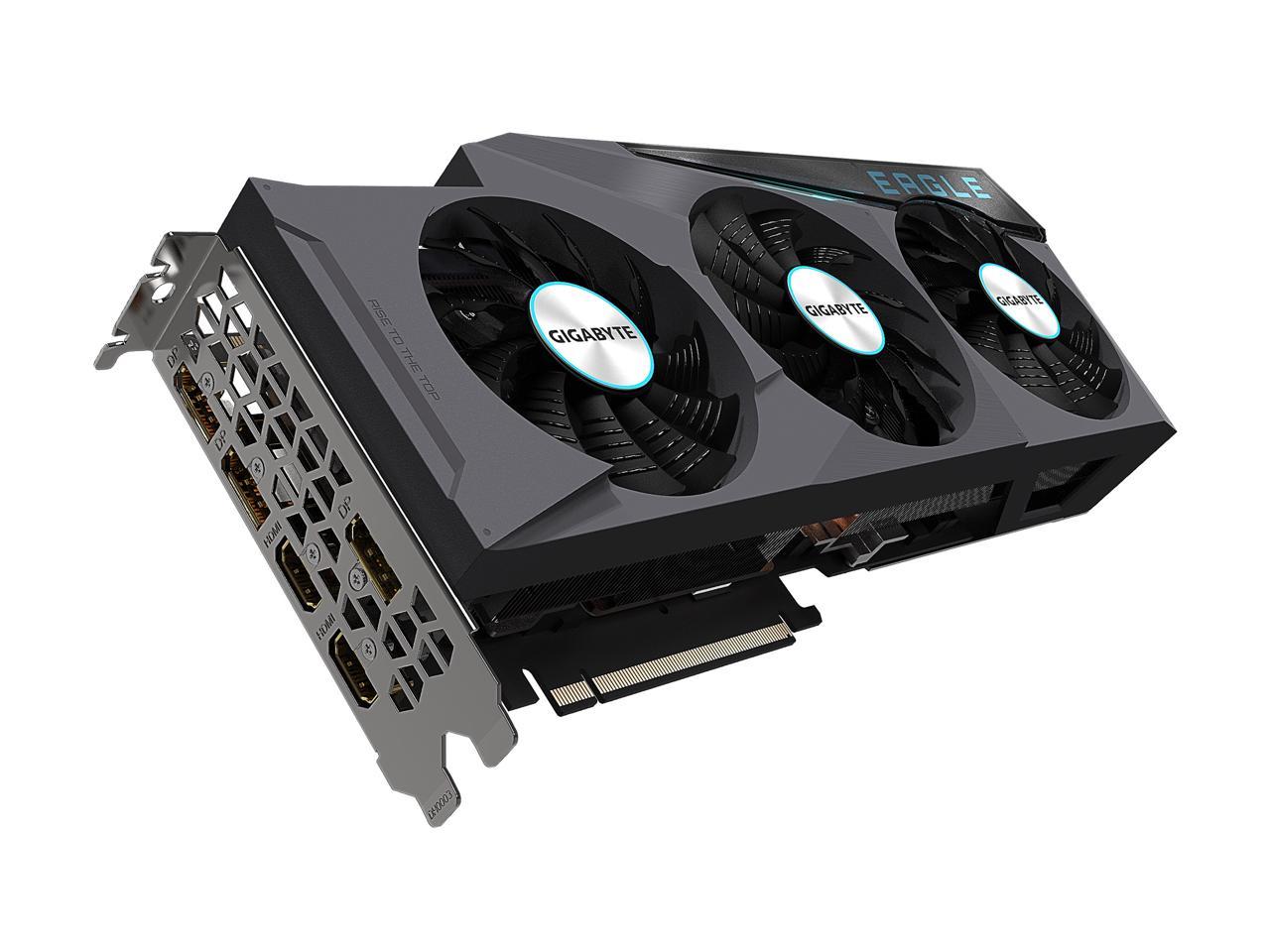 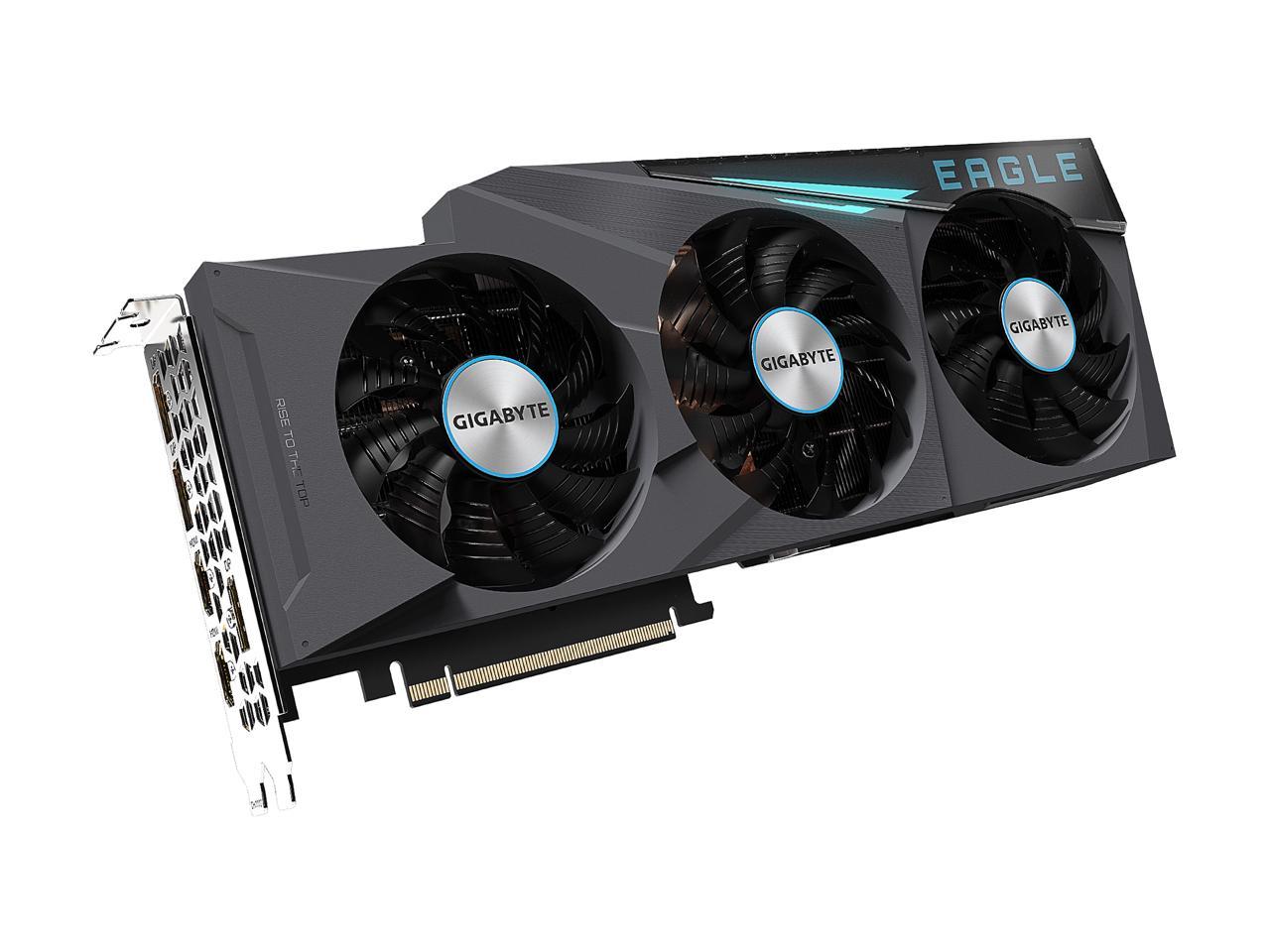 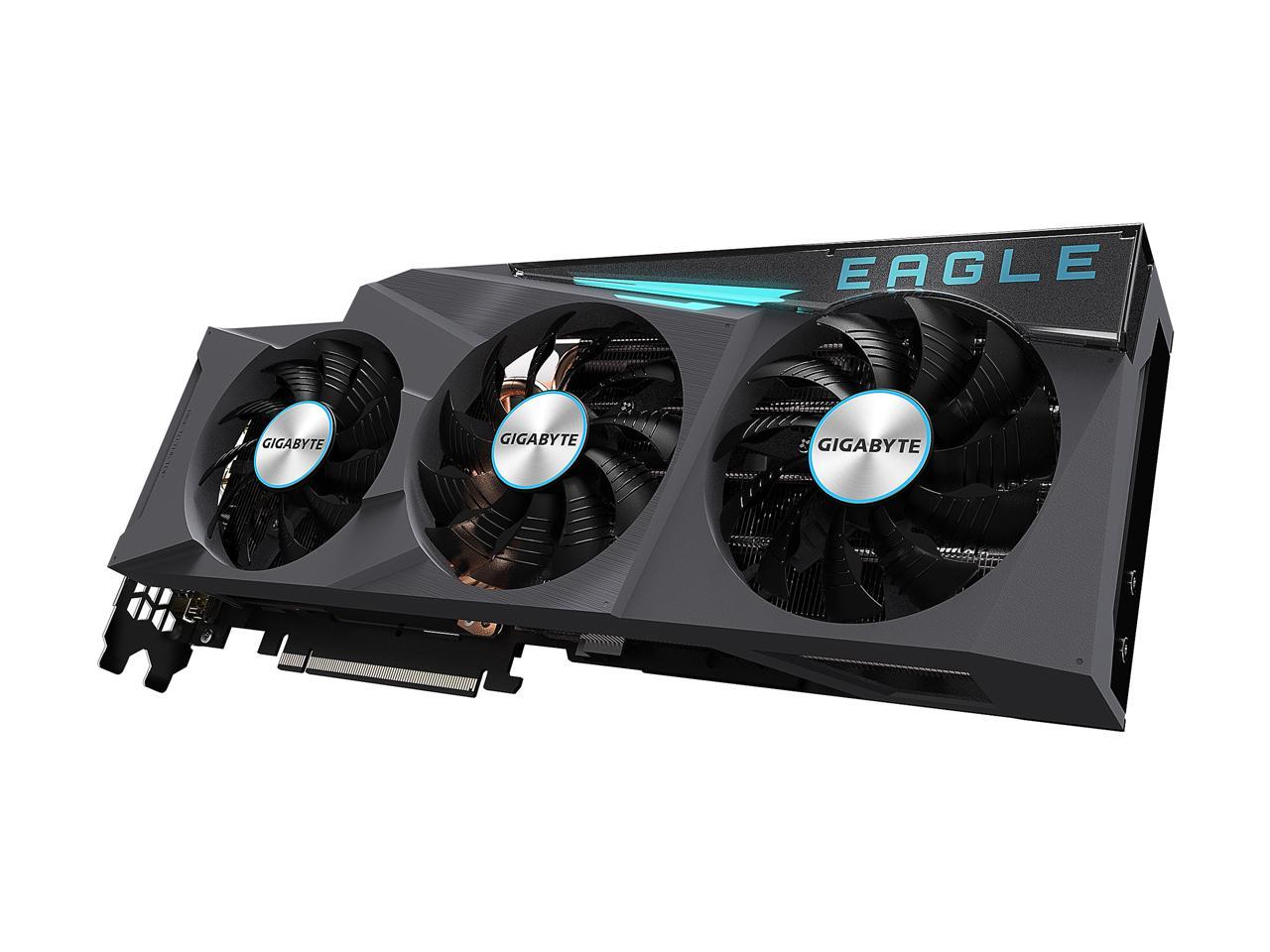 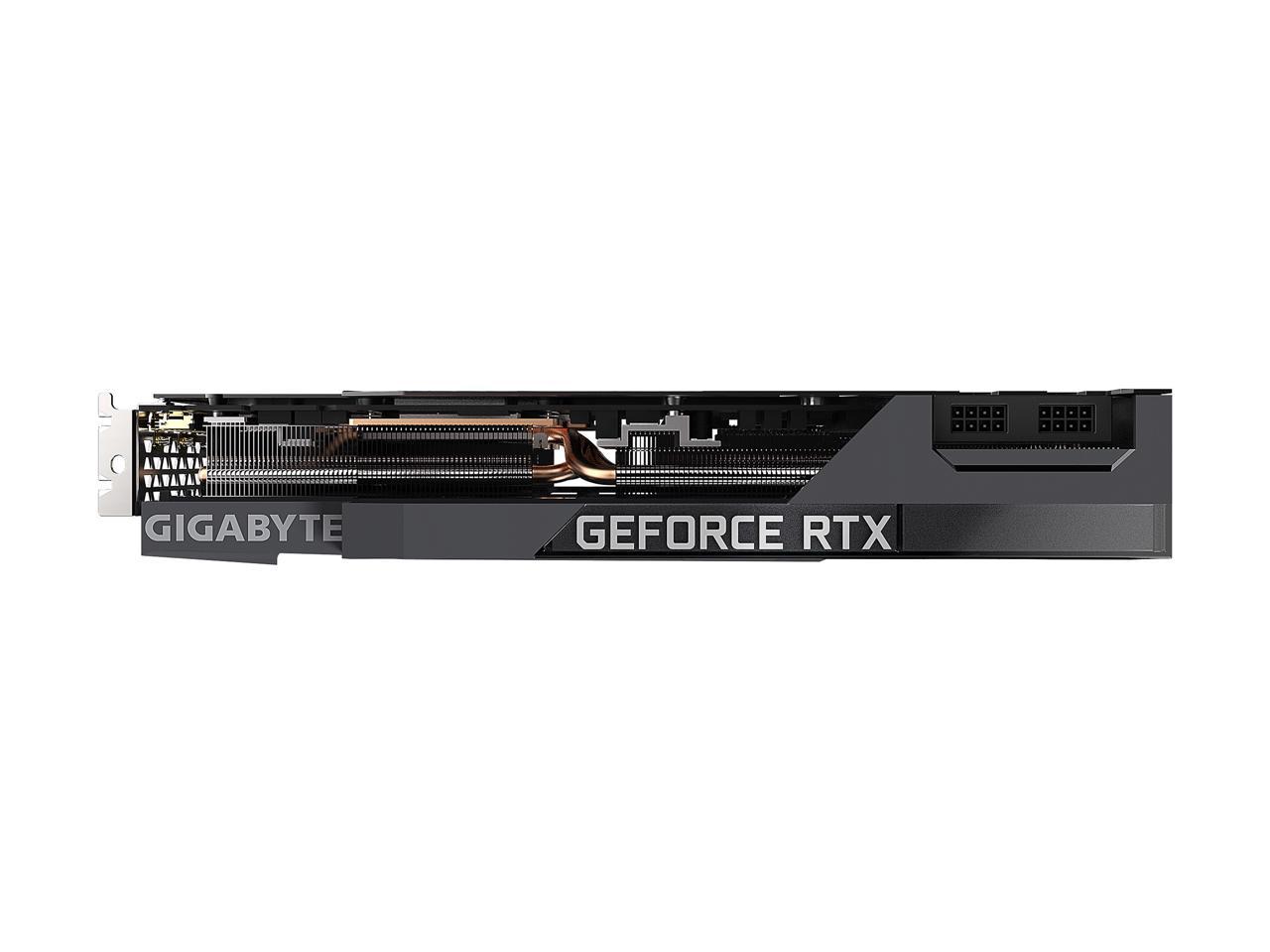 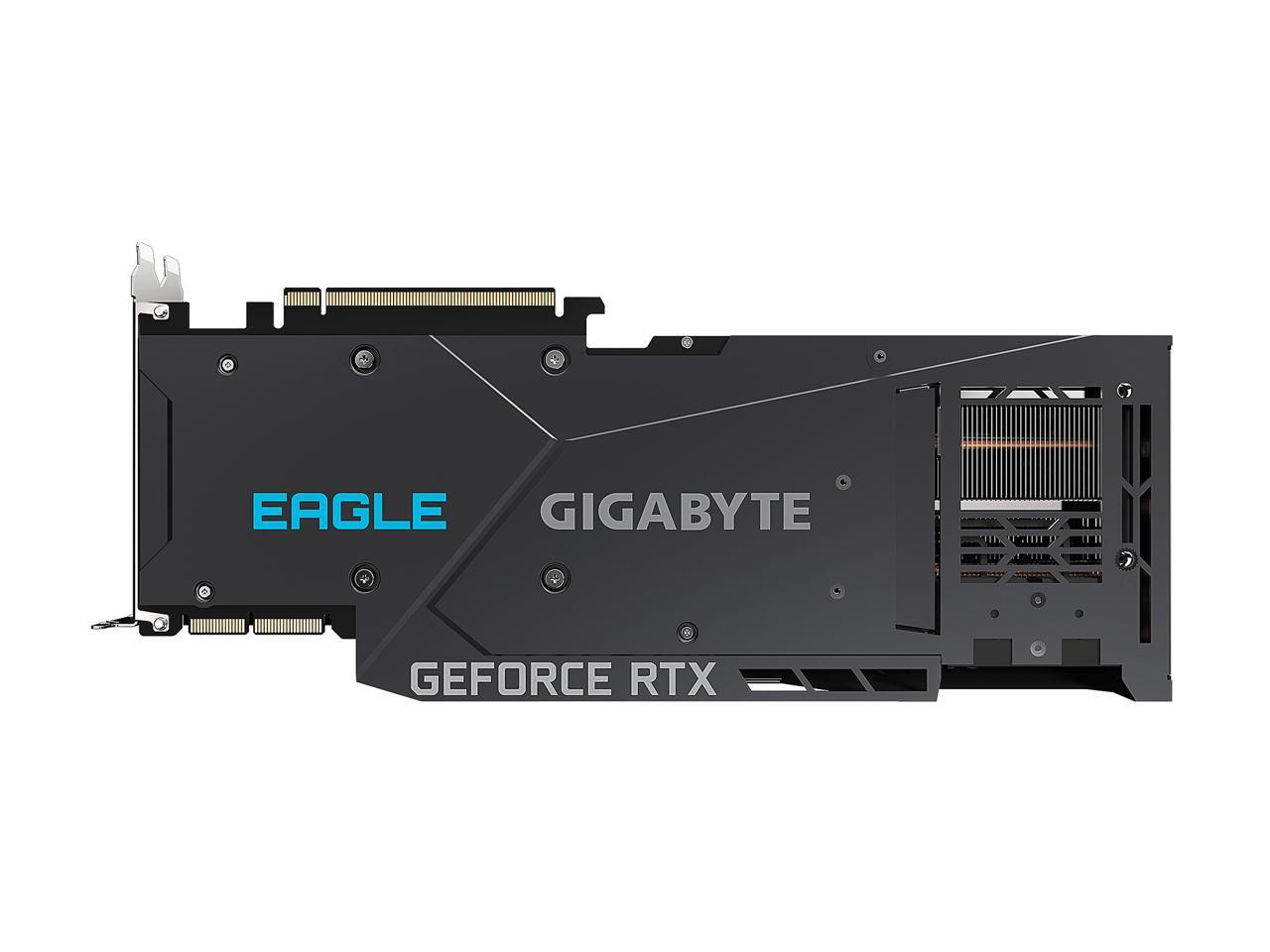 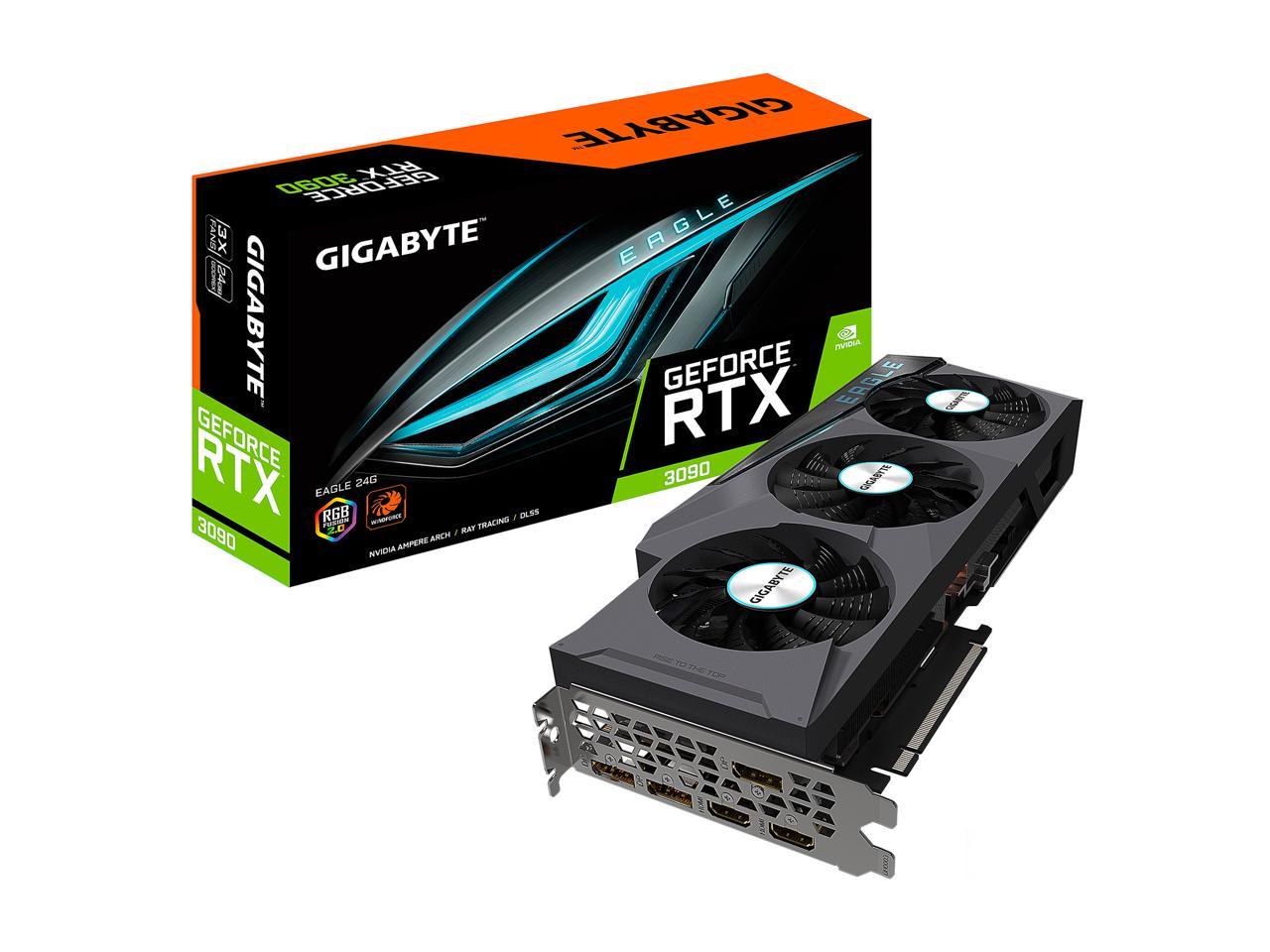 Support for NVIDIA NVLinkTM (NVIDIA SLI) technology, which combines 2 identical GPUs with an GeForce RTX NVLink Bridge to deliver the ultimate experience in your gaming.

Learn more about the GIGABYTE GV-N3090EAGLE-24GD

Pros: Video Clock boosts really close to 2Ghz without any tweaking, and it does this while usually sitting at around 66-68 Celsius. I've yet to see this GPU exceed 73 Celsius, even with ultra settings, RTX Ultra ON, DLSS turned off, etc. at 1440p resolution. Very quiet under load. No coil whine, and hardly notice the fans, not louder than other components in my system.

Cons: Bulky and power hungry. Fits in my system just fine (Corsair H500m). Older releases of the Gigabyte 3070/3080/3090 Eagle and Gaming models have issues that the manufacturer is aware of, related with the power connector. Serial Number 2038 (week 38 of the year 2020) or older (lower) might be defective. When I got mine it was Serial Number 2044, so if you buy it now it should be fixed.

Overall Review: This graphics card runs faster than I expected, at lower temperatures than I expected, while being quieter than I expected, and is the star of my build (which says a lot since I have a 5900x too!). If you get this GPU you won't regret it, so long as you have the a strong enough Power Supply with 2 8-pin PCI connectors and 850+ watts, as well as a large enough chassis to support it. Be weary of older released variants of this model, or similar models (per Cons section), as they are defective and require RMA.

Cons: - After only 3months, one of the fans stop working which makes the card get hotter than it's supposed too. Fan will not spin at high temperatures or when forcing fan speeds to 100% through Aorus Engine Software. - Tried Calling Gigabyte Tech Support & Customer Support 3X today only to be put on hold for 30mins plus. Left a Voicemail and did the place holder option and still nothing. Very Fearful about the RMA process. I've read many reviews on Reddit and they were not too kind on how Gigabyte was treating their loyal customers.

Overall Review: Leaving this 1 Star Review in hopes that someone from Gigabyte will follow up with me and help expedite this process. I vow that if I have a good experience in the RMA process, I will update this review and raise the Review Score. If not, I will elaborate on how I was treated and reach out to various other outlets to spread the word. Either way I will keep everyone updated and I'm hoping for the best for a customer who spent this much on one of Gigabytes products.

Pros: I use this card solely for machine learning not for gaming - Non-OC makes it have a good thermal performance for an extended time of running - Cheapest among all non-blower type 3090s. Update after two months of heavy usage: - I limited the power to 280w and offset the frequency by 105Mhz to achieve the undervolt effect in Linux, very cool very quiet. - After a day of training large models (100% usage during training, 60%-70% for 5min every hour or so), the temperature can sustain 58C to 60C.

Cons: - Too heavy, it bends near the end even with a Lian Li anti-sag bracket. I have to use a zip tie to tie and end with the case to level the card. Update: - Ended up buying two GPU holder brackets for this thing...

Overall Review: - If you would like to build a single GPU deep learning station, this is the choice.

Pros: -Low temp -silent -beast card, a lot of power -beautiful with some RGB on it

Cons: no cons for me, i am very happy.

Overall Review: for the price this 3090 worth it!

Pros: for me is the only one i can get

Cons: i think the Temp is so good 65c-69 at max with full load and i like that

Overall Review: if there is no other card there this one good to look for it