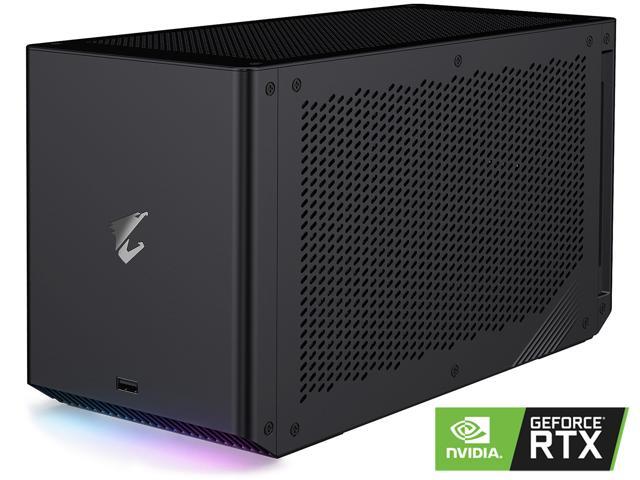 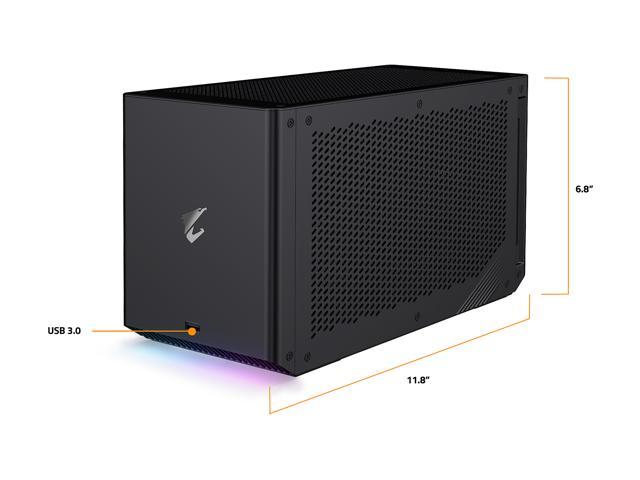 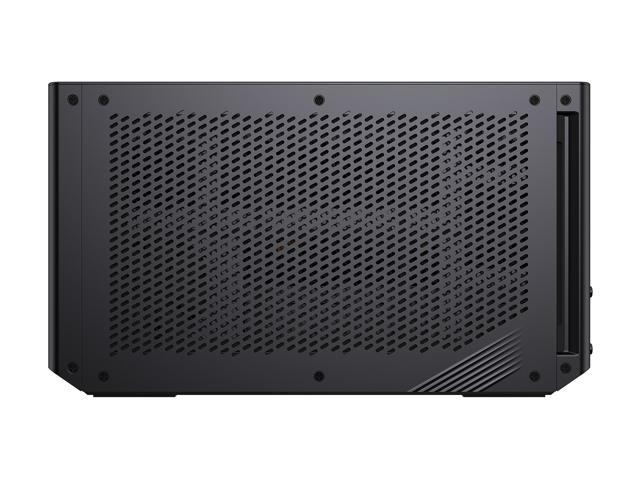 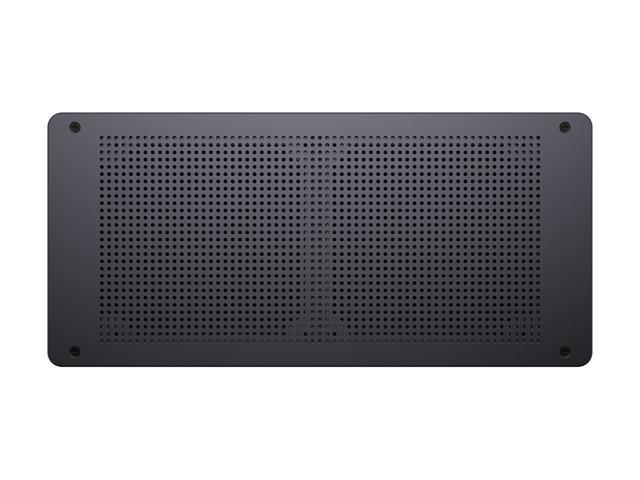 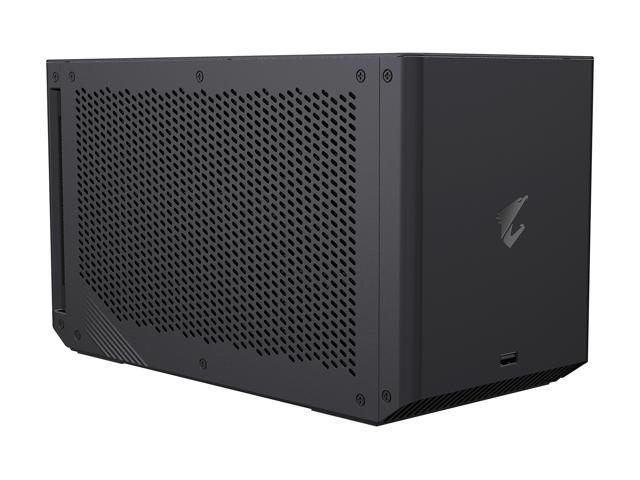 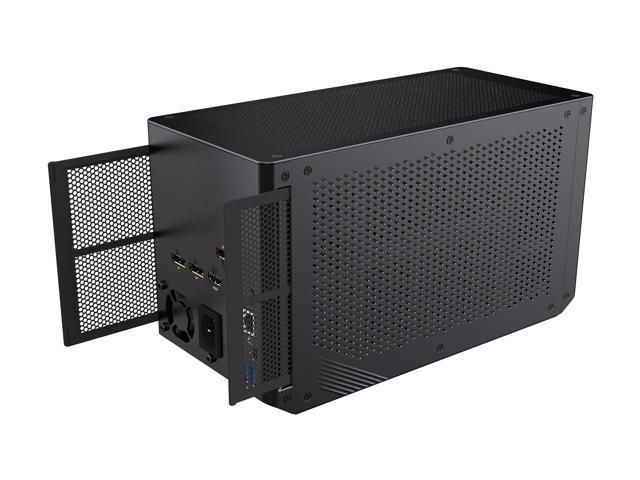 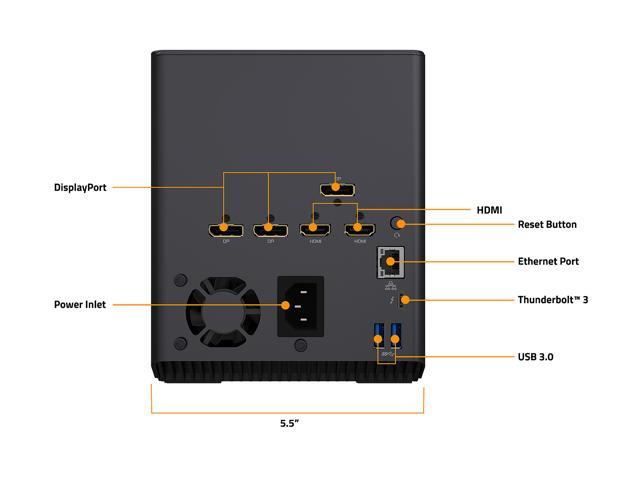 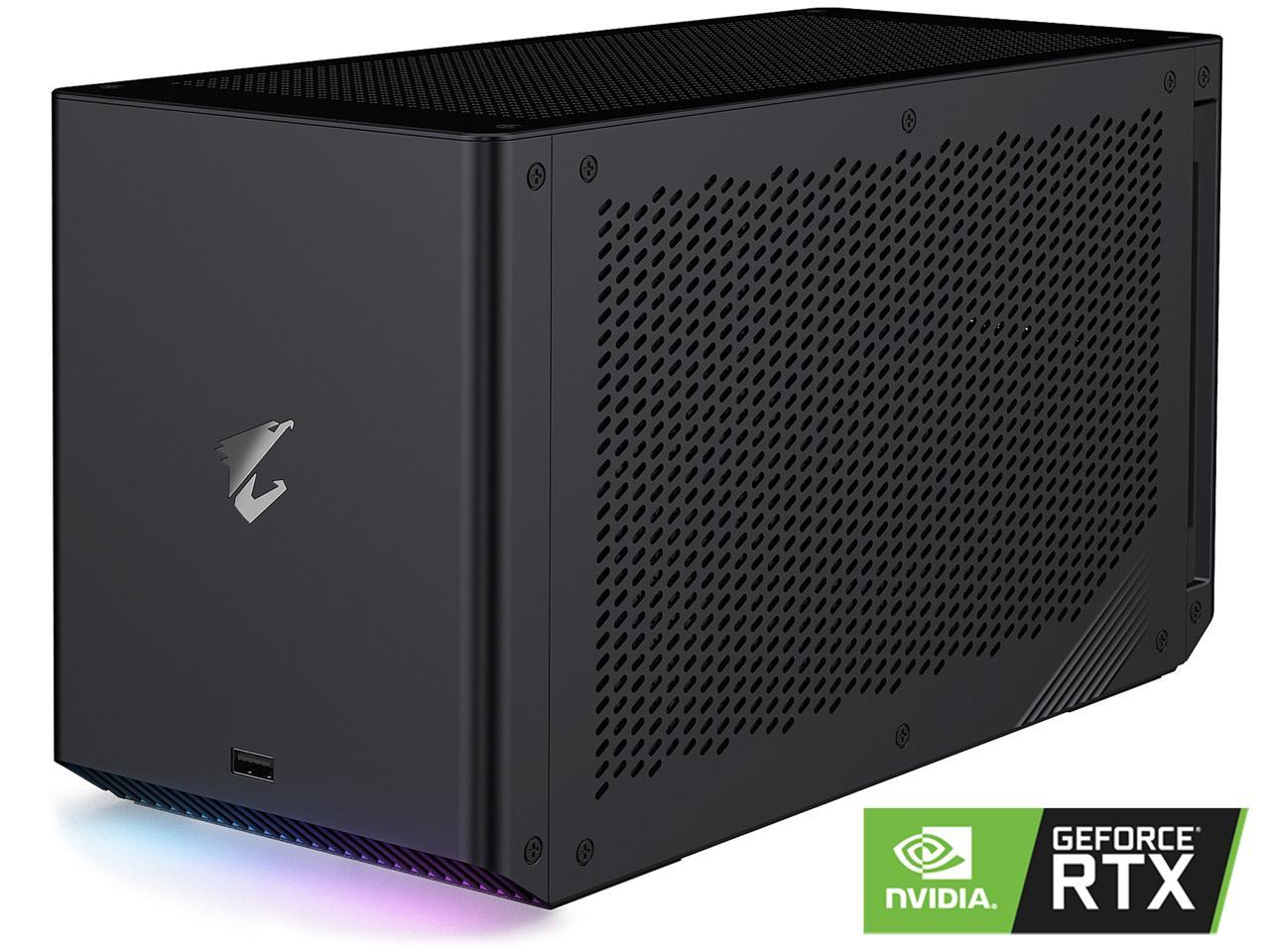 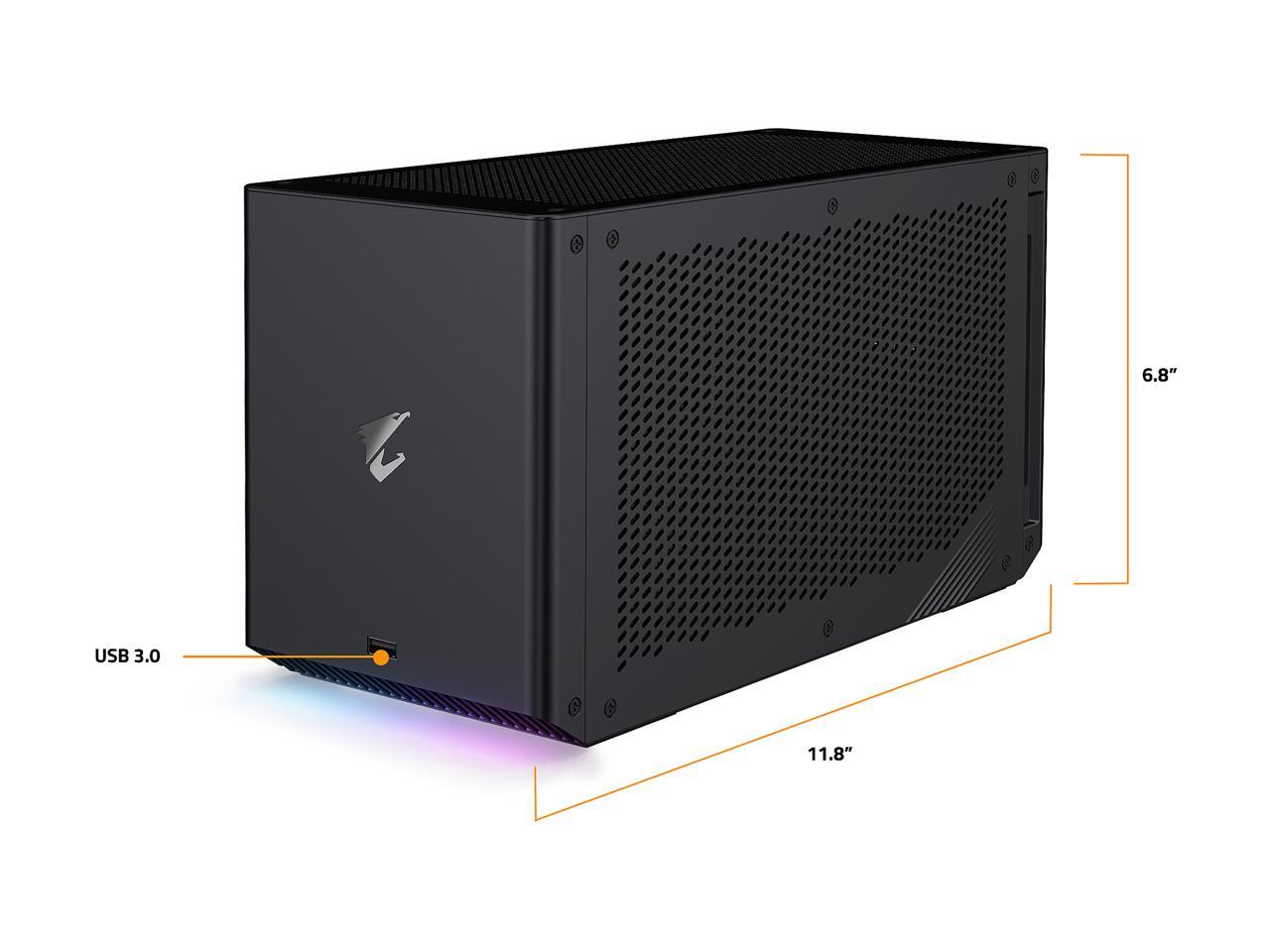 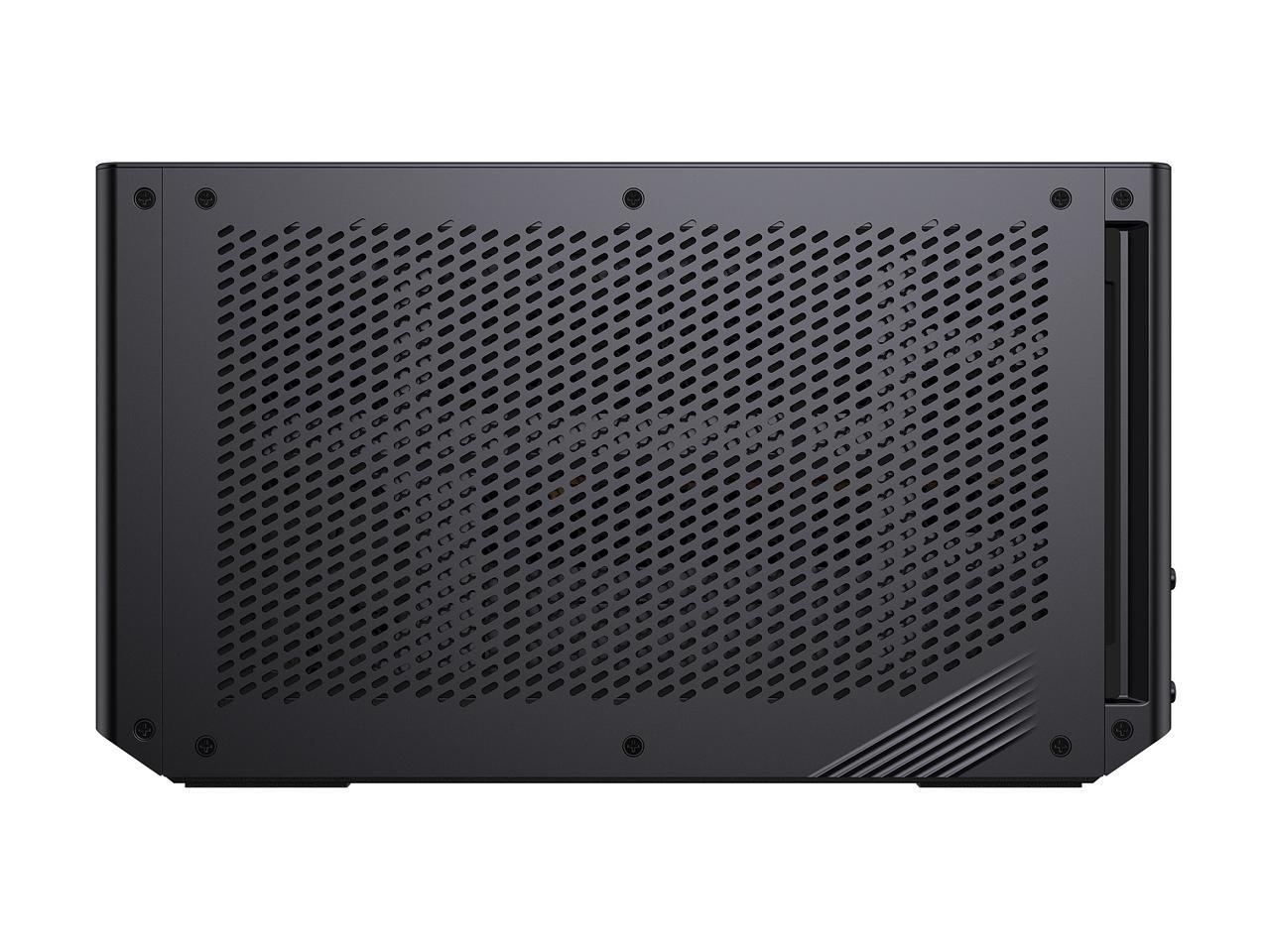 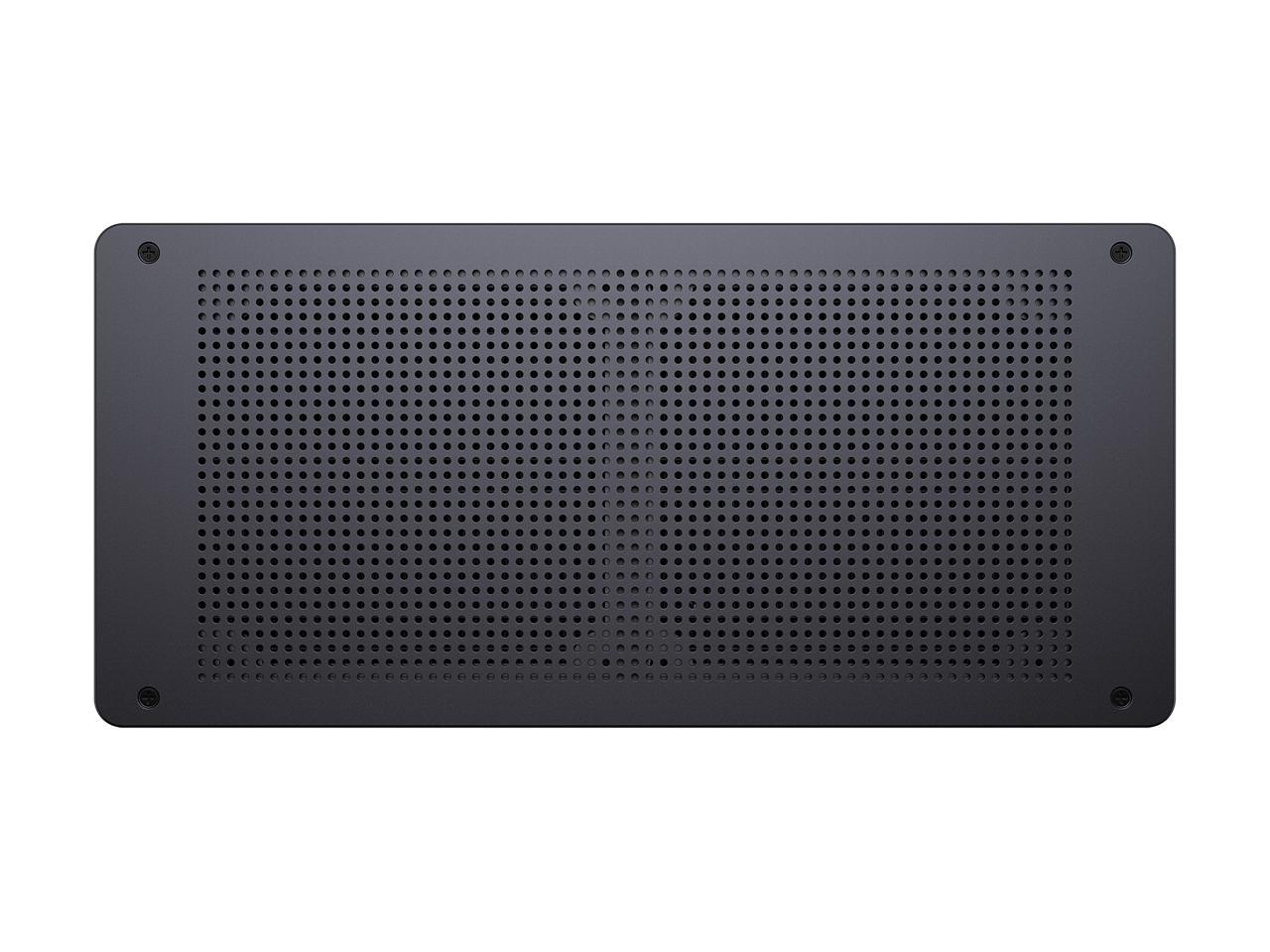 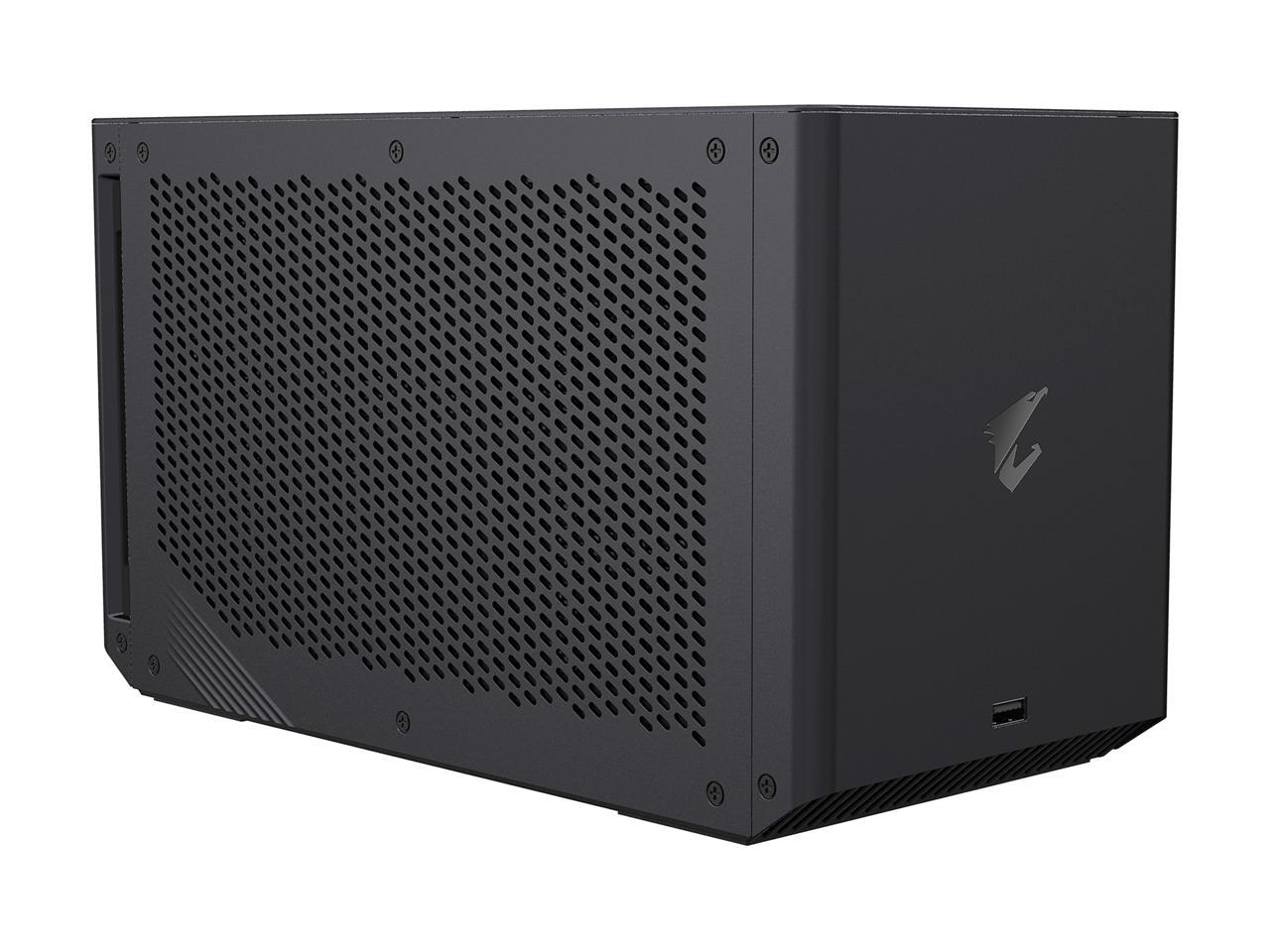 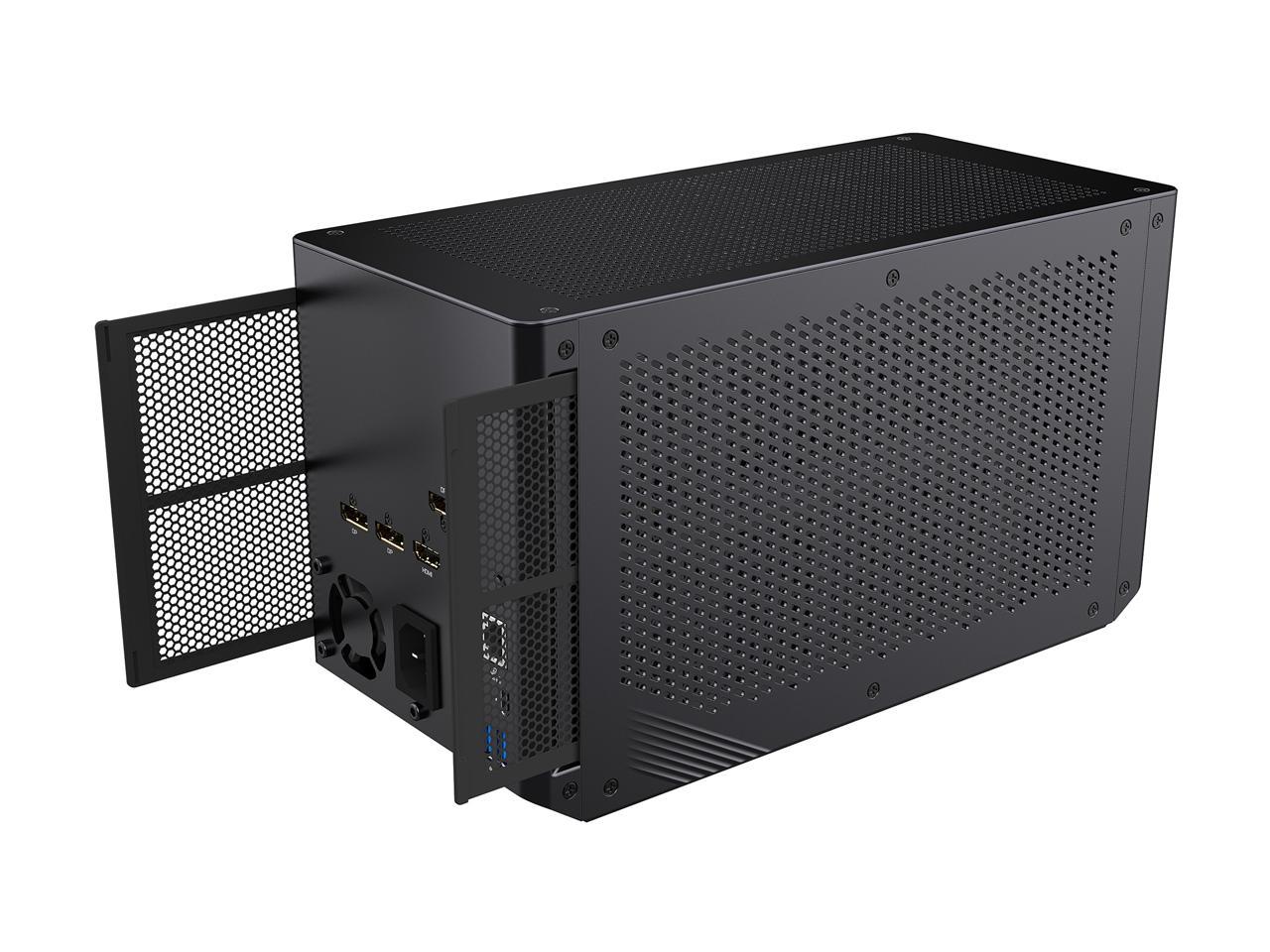 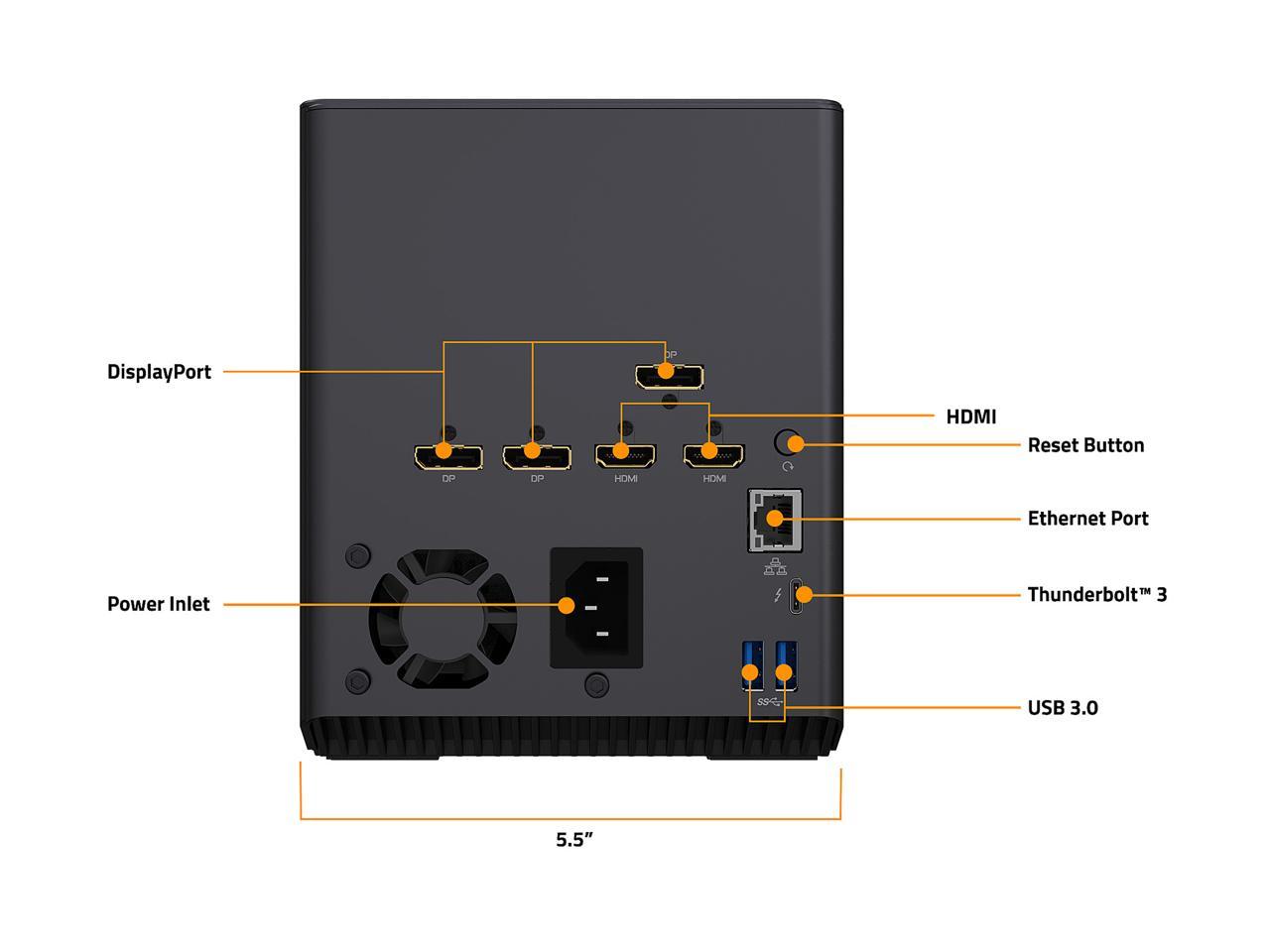 AORUS provides the all-around cooling solution for all key components of the graphics card. We take care of not only GPU but also VRAM and MOSFET, to ensure a stable overclock operation and longer life.

AORUS WATERFORCE all-in-one cooling system integrates a large copper plate, a 240mm aluminum radiator and two 120mm fans. And with an optimized pump and water block, it provides the most efficient water flow and cooling performance at a lower noise level.

WATERFORCE provides the best cooling solution for the GPU/VRAM/MOSFET. The copper plate and copper heat-pipe efficiently dissipate the heat to result in a real silent environment.

Powered by GIGABYTE GeForce RTX 3090 graphics card, AORUS RTX 3090 GAMING BOX transfers the Ultrabook laptop PC into a gaming platform, delivers the incredible performance for real-time ray tracing and graphics-intensive games. A network chip that allows you to connect to a wired network is built into the GAMING BOX. You don't have to worry about transmission interference during the game. Install AORUS engine and RGB fusion 2.0 to adjust the performance and RGB lighting for your preference.

Powerful AORUS RTX 3090 GAMING BOX accelerates your work with incredible boosts in performance. Whether you are doing VIDEO EDITING?3D ANIMATION?PHOTOGRAPHY?GRAPHIC DESIGN?ARCHITECTURAL VISUALIZATION or BROADCASTING, it can save you a lot of time.

AORUS RTX 3090 GAMING BOX connects to the laptop PC by Thunderbolt 3. It provides the speed up to 40 Gbps and delivers 100W to charge the laptop PC. It creates much more possibility in one compact port.

From wireless to wired

Learn more about the GIGABYTE GV-N3090IXEB-24GD

Overall Review: took out the GPU to use in my tower as well. performance is as expected, and it's quiet. recommend buying GPU support braces for the cooler and the card- you are NOT going to be able to mount the cooler in any position other than right below the card. The tubes are very, very short.

Pros: I've gotten this eGPU to work on Macbook Pros and Desktop systems with Thunderbolt 3. It does perform adequately on moderate workloads.The AIO cooling is great for graphics processor intensive workloads that do not overtask the memory.

Cons: Thermal throttling issues that require attention to the memory junction temperatures. If you are performing longer video rendering jobs that require more memory you have to underclock the memory to keep performance sustained. I was able to keep the memory junction temperature under 95c with adjustments to stay within the DDR6x thermal specifications. Inadequate cooling on the back side of the GPU board which is populated with 12GB of DDR6x memory and contributes to higher temperatures and thermal throttling. I used a small desktop fan blowing on the side vent of the box to increase airflow and aid in heat dissipation. I would recommend heat sinks on the back side memory modules and case fans on the side vents to provide better air movement and heat exchange. Thunderbolt 3 connections to some desktop systems seems to be quirky and require a few reboots to get the GPU properly connected.

Overall Review: If you have some technical experience with GPU thermal settings and configuring Thunderbolt 3 eGPUs I would recommend this but I personally think you would have less issues with the 3080 Gaming box. A portable eGPU is an attraction option for Macbook Pro users with video rendering projects. I would hesitate on purchasing another one. I think I would get better performance with less thermal hassles with the 3080 Gaming box. On the 3090 I recommend heat sinks on the back side memory modules and side vent case fans for improved heat exchange.

Pros: - Feels like a premium product, which it should at this price point - The two 120 mm fans on the radiator are surprisingly quiet and do a good job of keeping the card cool. - Comes with a nice bag for transporting

Cons: - Thunderbolt 3 interface (not a big deal if you can connect to it. I ended up taking out the card and connecting as usual to my motherboard's PCIe connector.) - Slight coil whine but that's a given with modern cards

Overall Review: EDIT: The GPU died on me. I was using the computer when it suddenly shut off and wouldn't turn back on. I discovered that if I unplugged the card from my system, it turned back on and it's working just fine with my old GPU. I've submitted a ticket to Gigabyte to get a replacement. I bought this for the card which I took out of the enclosure so I could connect it to my motherboard's PCIe connector. Otherwise, you'll have to use the Thunderbolt 3 connection. I was surprised by how quiet the fans are and how well they keep a cool temperature. The enclosure has a nice, smooth feel to it which I really liked. I felt a little bad taking the card out of it but that's on Nvidia for not manufacturing enough cards. The bag for transporting the enclosure is really nice. If you can afford this and are tired of playing the F5 game, you might want to look into this. Better than giving scalpers your money and if you don't have a Thunderbolt 3 connection, you can at least take the card out and still use it.

Cons: Basically, the back of the card isn't cooled at all. There is a plastic piece that is attached to the memory on the back with 2" pads. Within seconds memory temps sky rocket to 110C and thing throttles. There is no air flow at all. To make it work I basically had to take it apart, replace pads, put radiator I got off online and keep it open.

Overall Review: Other then that, generic 3090

Manufacturer Response:
Dear Customer, Thank you for your comments. We apologize for your difficulty with your GIGABYTE product. Please contact us at support-newegg@gigabyteusa.com with case number 187257 in the e-mail subject line. We will provide personalized service and analysis to help solve your issue ASAP. If the matter is urgent, please send us your contact number, and we will contact you. GIGABYTE VIP Support Team
Not Happy
Ownership: 1 day to 1 week
Verified Owner
It lasted 6hrs...1/28/2022 7:56:46 PM

Overall Review: Issues getting it running on a MacBook Pro 16 in Bootcamp, but eventually got it running. Running some light games just to see the performance difference and it just flickers and dies. Pulled power and Thunderbolt cables to try to reset it. Let it sit for 30mins and repluged. Still dead. No PSU fan, no pump, no LED lights. It lasted 6 hours before giving up the ghost. What a disappointment.

Overall Review: Got it to work runs well thanks newegg:)

Pros: - it was in stock - smaller form factor than building an external box yourself - pre-installed liquid cooling for GPU (at the expense of memory cooling)

Cons: - Thermally throttles with any memory usage (video editing, tensor core calculations, probably mining too) - physically flawed engineering - no airflow to the backside of the card, they actually block the airflow with a controller! - Slower than an air-cooled 3070 in a properly ventillated external Razor case.

Overall Review: - Would only recommend if you plan on removing it from the external case

Overall Review: Card thermals are amazing but card performance is not the same as in a pcie connection