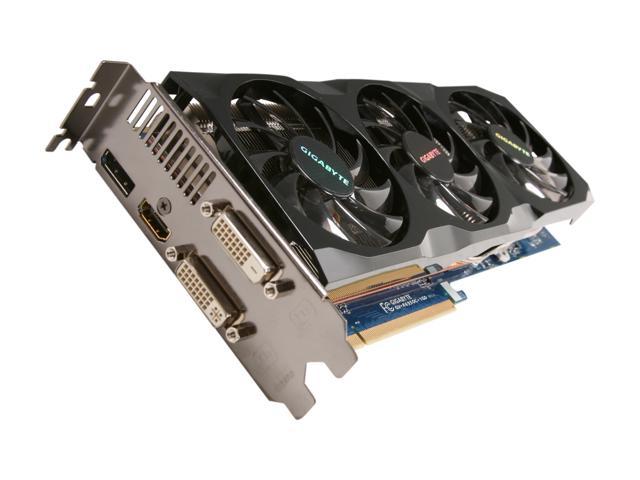 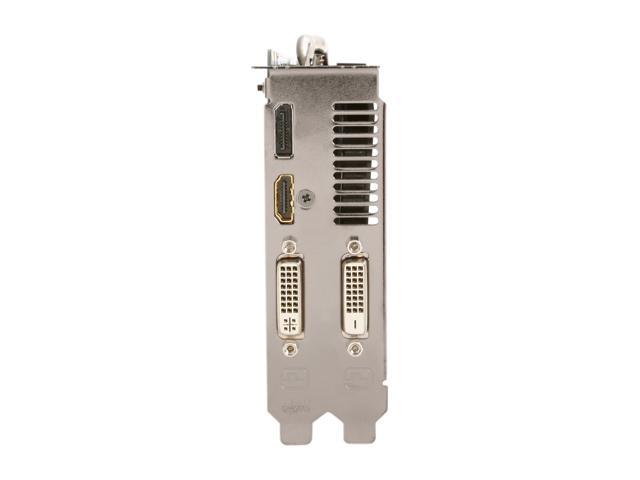 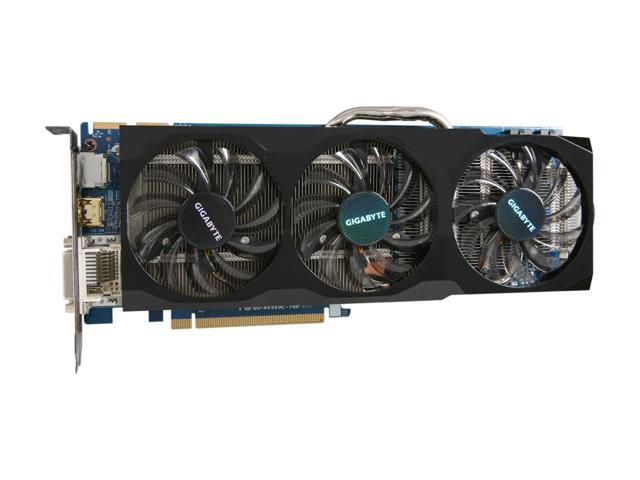 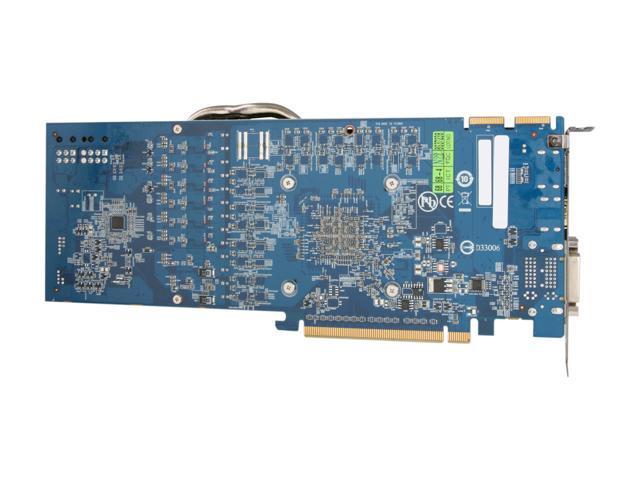 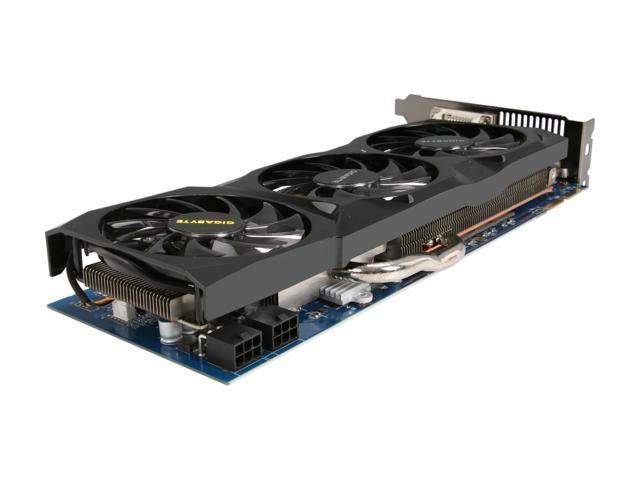 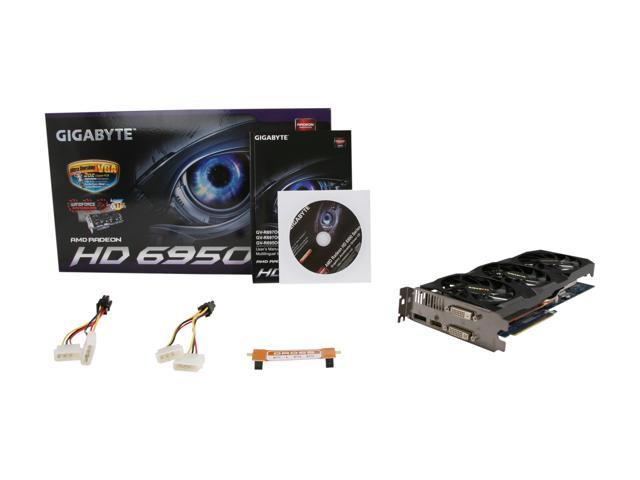 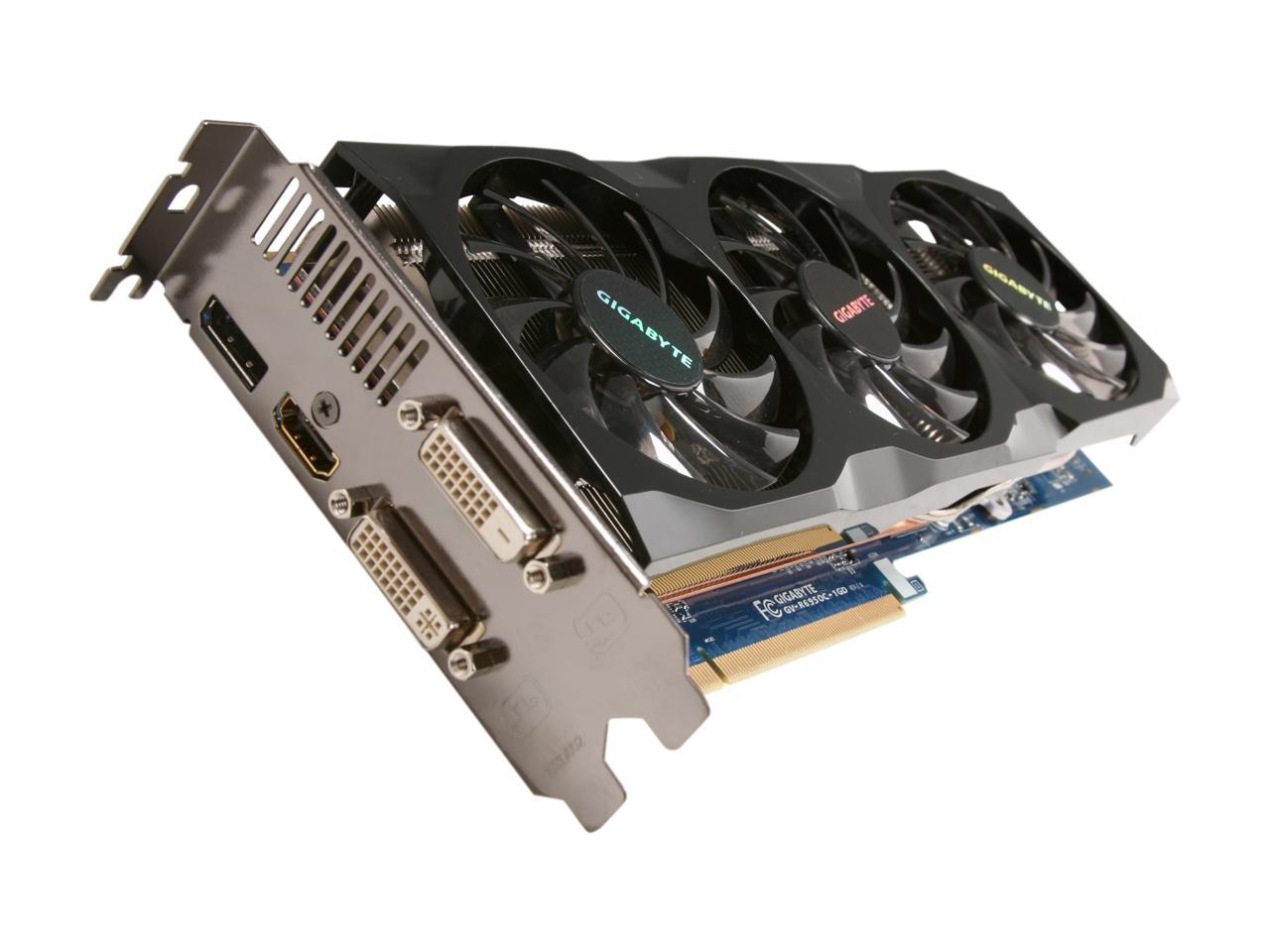 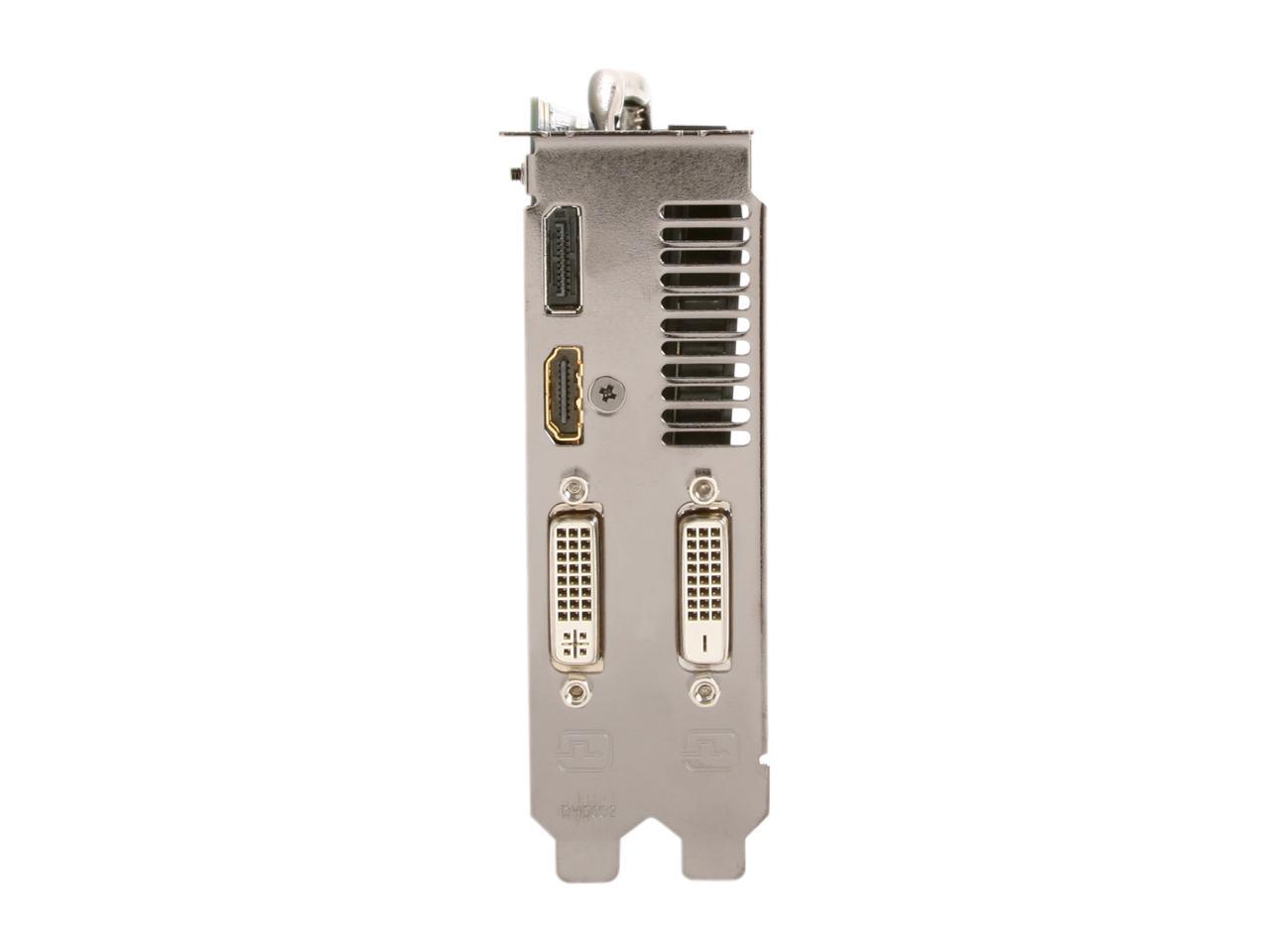 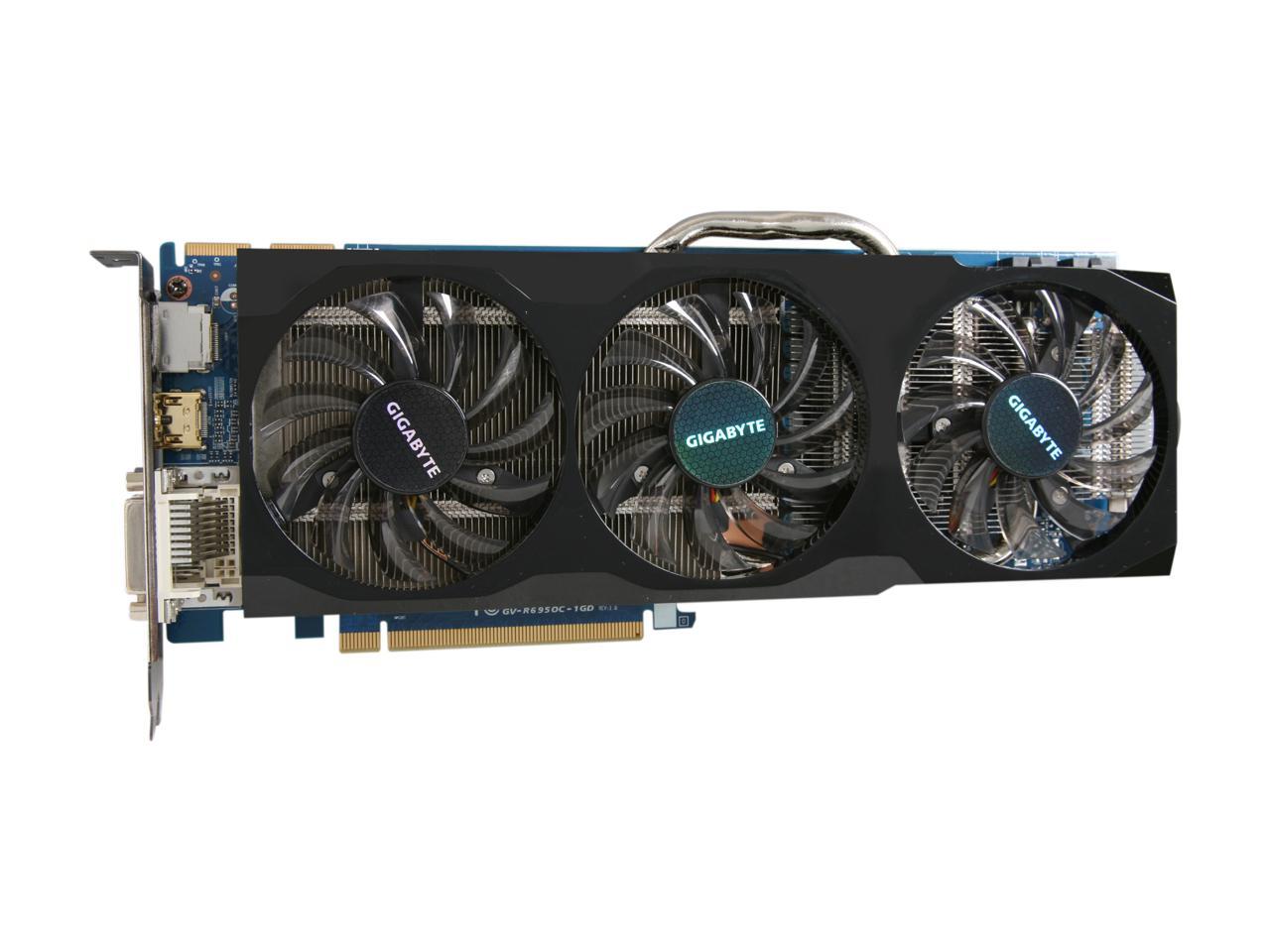 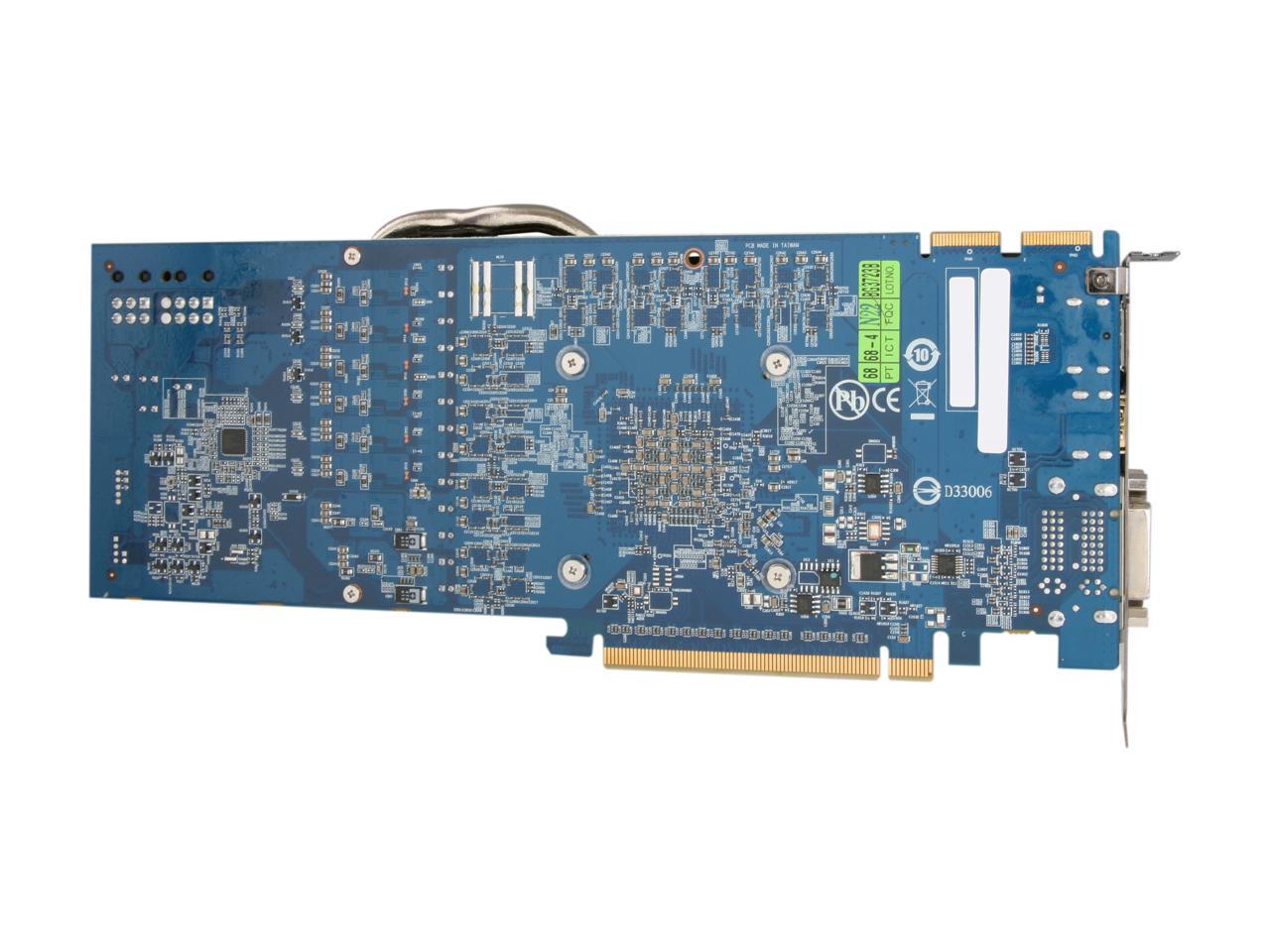 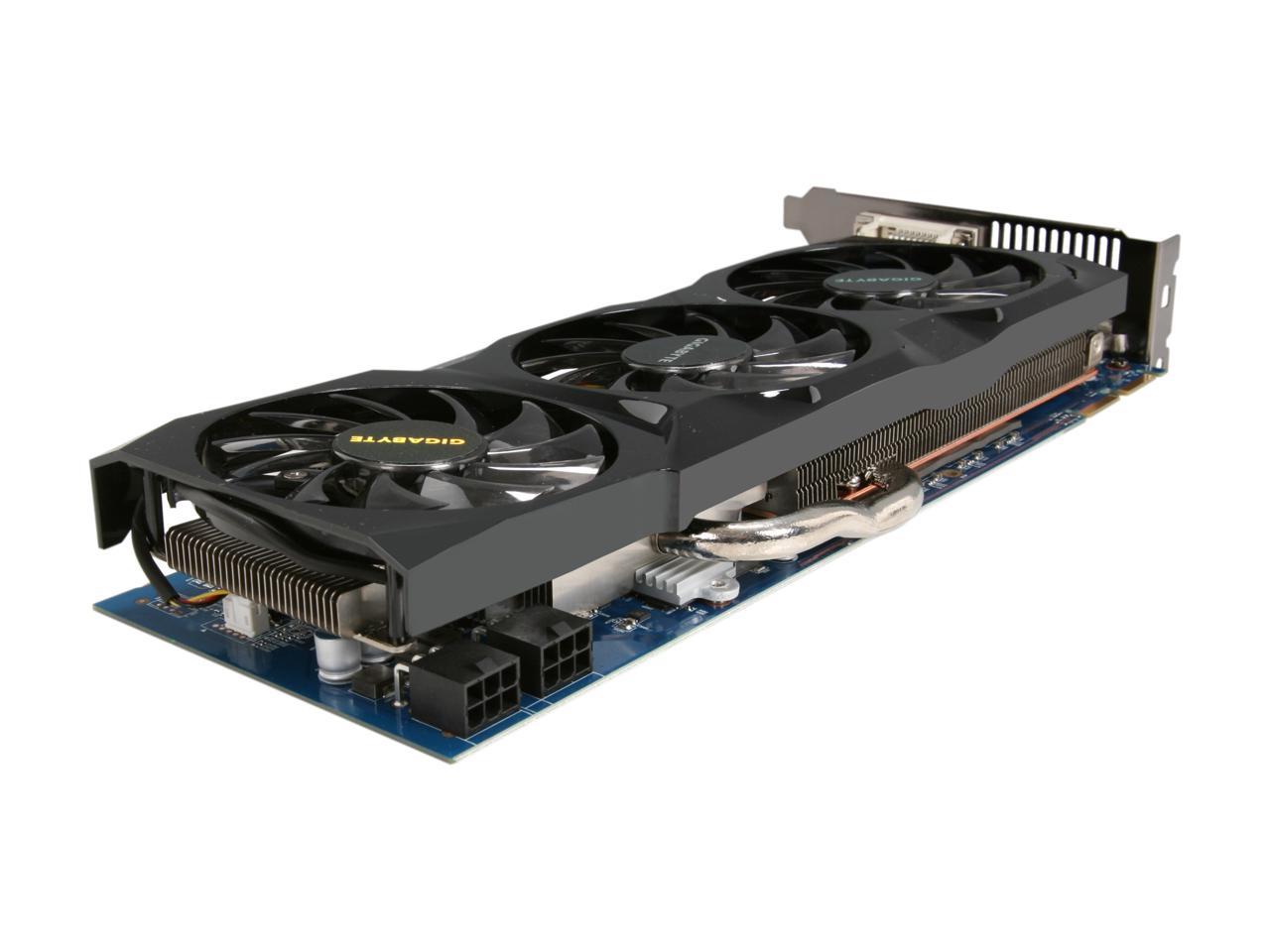 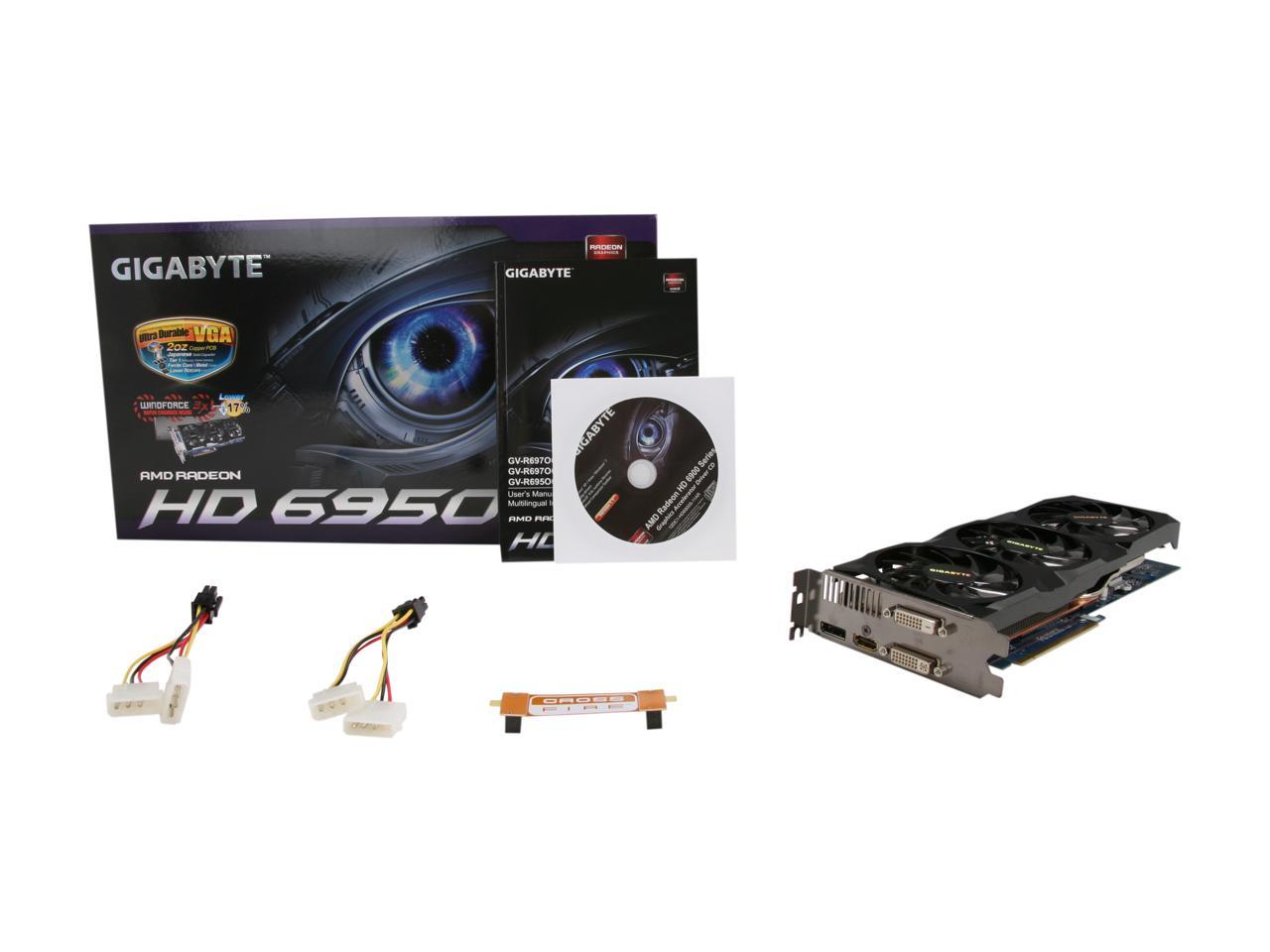 Learn more about the GIGABYTE GV-R695OC-1GD

Pros: Massive overclock, super quiet since 3 fans means they all spin slower, runs very cool, great performance. It's big and impressive. Plays games real smoothly. Even though it didn't work, the 1st one I got clocked to 950 stable, so you have the possibility of massive headroom. My second one only clocked to 900 but the RAM clocked all the way to 1500 stable, which is very impressive!

Cons: First one I got was defective- because there are 3 fans, they put extra load on the fan controller chip and the fans would stop spinning after a while, causing overheating and crashing. The replacement came in and works like a charm though, so I'm going to average the ratings and give it a 3. Just be aware of the possible design issue- I've read reports of the Windforce cooler fans not spinning or stopping because the controller simply can't handle the power of 3 fans. First one overclocked to 950 stable, but it had the fan issue, and the working replacement I got only overclocks to 900 unfortunately, but it works, so whatever. Voltage regulator chip does not support voltage modding, which kind of kills the point of having such a nice cooler in my opinion, since you can't use the extra cooling power to up your voltages and your clocks as a result. It could not be changed in Afterburner and RBE showed that it's because the chip doesn't support it, so even BIOS editing won't work.

Overall Review: Can't unlock, but it's not a big deal- I knew that buying the card.

Cons: * Extra shaders appear laser cut so even if you are able to make the BIOS writable, you won't be able to unlock the extra shaders * Doesn't include DVI-VGA dongle. I don't need it often, but it's nice to have, so this is just them being cheap

Overall Review: With factory overclock at 870MHz and the good cooling, this should be on your shortlist when considering a 6950.

Pros: Just received two of these cards today and unlocked all 1536 shaders on both of them. Stock voltate with 900Mhz core clock. ...mining BitCoins

Pros: I have not had a chance to test this card out on games yet because I'm waiting on SWTOR to be released. I had a HD 4870x2 crossfired with a 4870 and it shows a higher Windows Experience Index (7.9) and it increased my 3dmark06 rating from 18000 to 28000. Pretty excited to test out DX11. To flash to a 6970, export your video cards Bios and make a back up, export another copy for editing. (You can export with GPU-z). Use RBE to edit your bios file and only change the shaders (which is on the last tab). Note - RBE will error when you load your bios saying overclock doesn't load. Save your bios file with the new shaders. Use ATI's WinFlash to upload the new BIOS file to your video card. Reboot, use GPU-z to check out your new shaders. Then overclock your card back to 870 and memory to 1250 - 1300. Set your fan speed back to automatic. My card runs great. (Youtube has videos on this, they do work on Gigabytes card.)

Cons: Wish you could increase voltage to make it run stable at 900MHz.

Overall Review: The other people who reviewed this and said it cannot be flash are only stating that because it has one BIOS not two. It does work, I've done it. Card runs under 50c while testing even while overclocked and with the additional shaders. amazing.

Pros: This card is excellent for the price. It runs quite and cool and gives great performance.

Overall Review: This will fit in an Antec 300 case, by about ½ an inch. You won't be able to put a hard drive in the opposing slot, but it does fit.

Cons: As others have mentioned it's super long.

Overall Review: The card hangs a good couple of inches off the board and if were using a mid-tower without a lot of depth space could be a real issue. My full tower Silverstone case had no issues thankfully. I was impressed with the stock cooling system, I removed the fans and heatsinks to inspect what kind of thermal grease it uses and contact was good. As usual, Newegg delivered it in a well cushioned box and everything was delivered in a timely manner. Lastly, Free Deus Ex game thrown in was a nice touch by AMD, even better because the coupon code uses Steam.

Overall Review: I bought this card in preparation for BF3. My old card was a Sapphire Radeon 4890, and while it got the job done, I wasn't able to max out the latest games @ 1080p. Since buying this card, I can now run BFBC2 and Witcher 2 at 1080p with all the eye-candy maxed (except for Ubersampling in TW2, of course). I have an Antec 902 case, and the card JUST fits, though if I had a hard drive in the bay next to the card, it would not have fit. Most mid-tower cases are probably OK, but like others have said... measure! Rig: Intel i5 750 Lynnefield Gigabyte P55 UD4P 8GB G.Skill 1600 Ripjaws Corsair 750TX PSU Antec 902 and of course this Gigabyte 6950 OC to 900Mhz core.

Pros: Incredibly fast gaming card! Stays remarkably cool under full load! ( Reaches about 68-69°C in Furmark) Can Max out almost every modern game in my library without dipping below 40 FPS. Great deal for the price, plus a free game! I should mention its very quiet as well.

Cons: Can't have its shaders unlocked from what Ive gathered. Doesn't seem to be able to clock its core past 900mhz (which it runs great at btw)

Overall Review: This sealed the deal for an upgrade from my overclocked HD 4890. If you want a non ref. 6950 this is a fine choice!