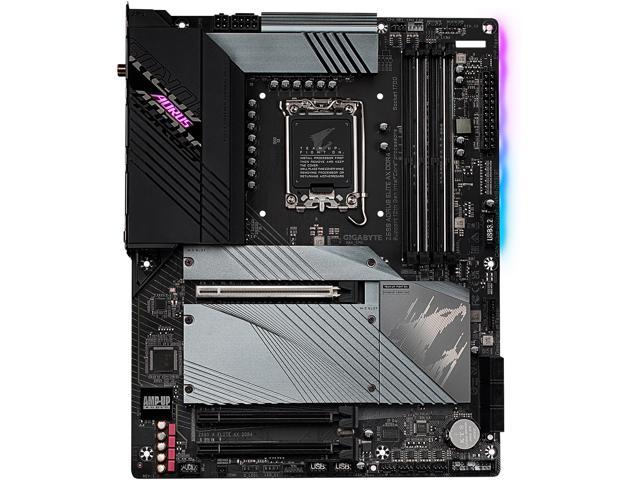 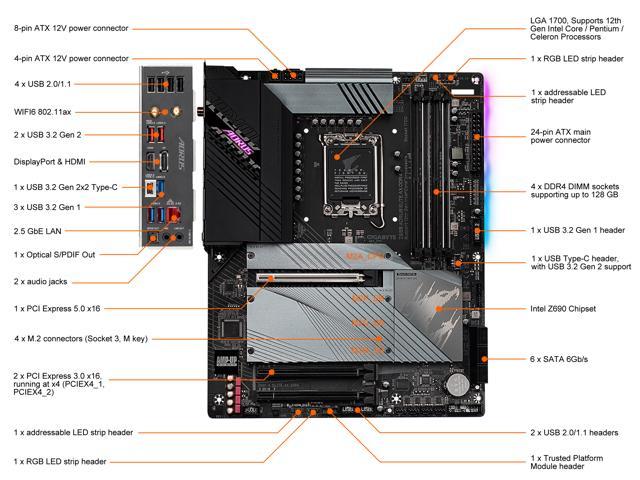 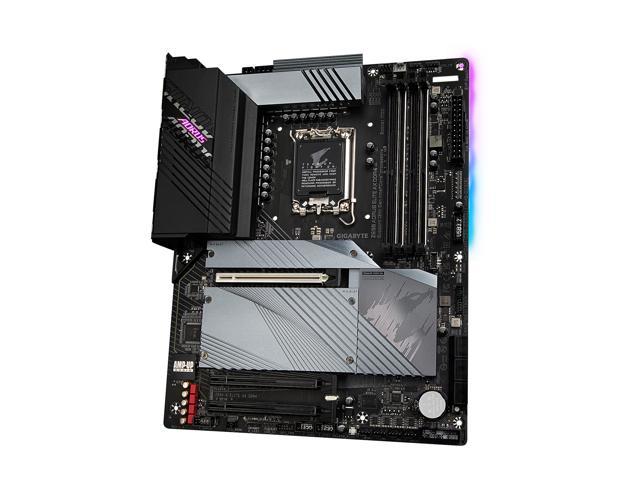 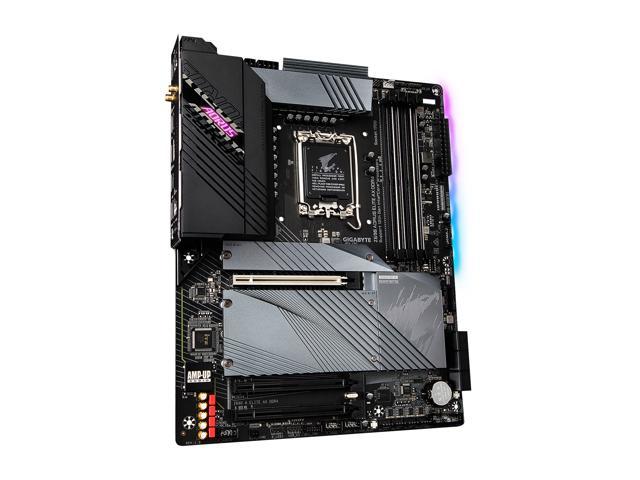 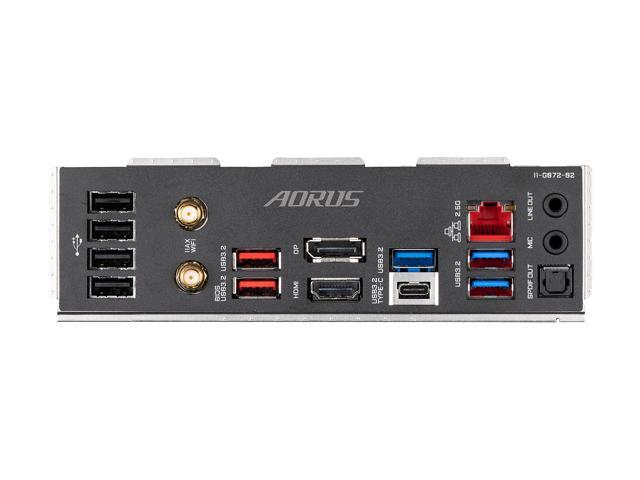 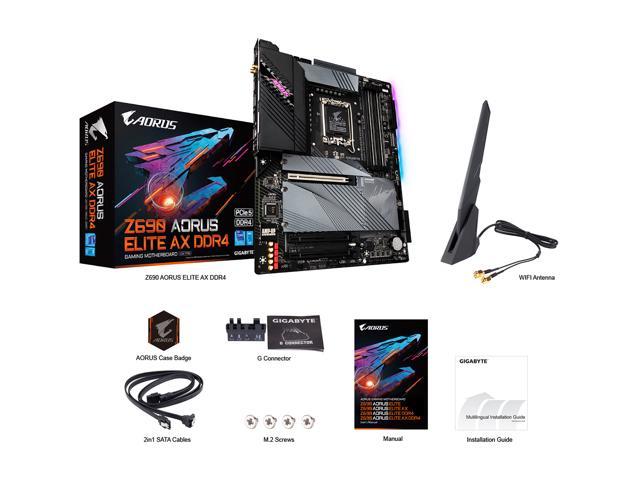 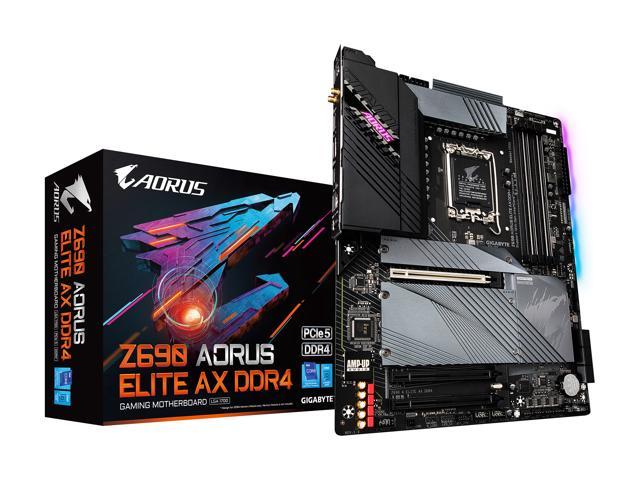 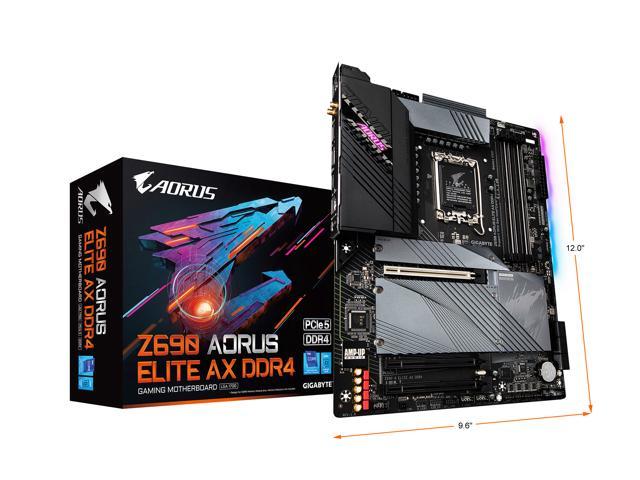 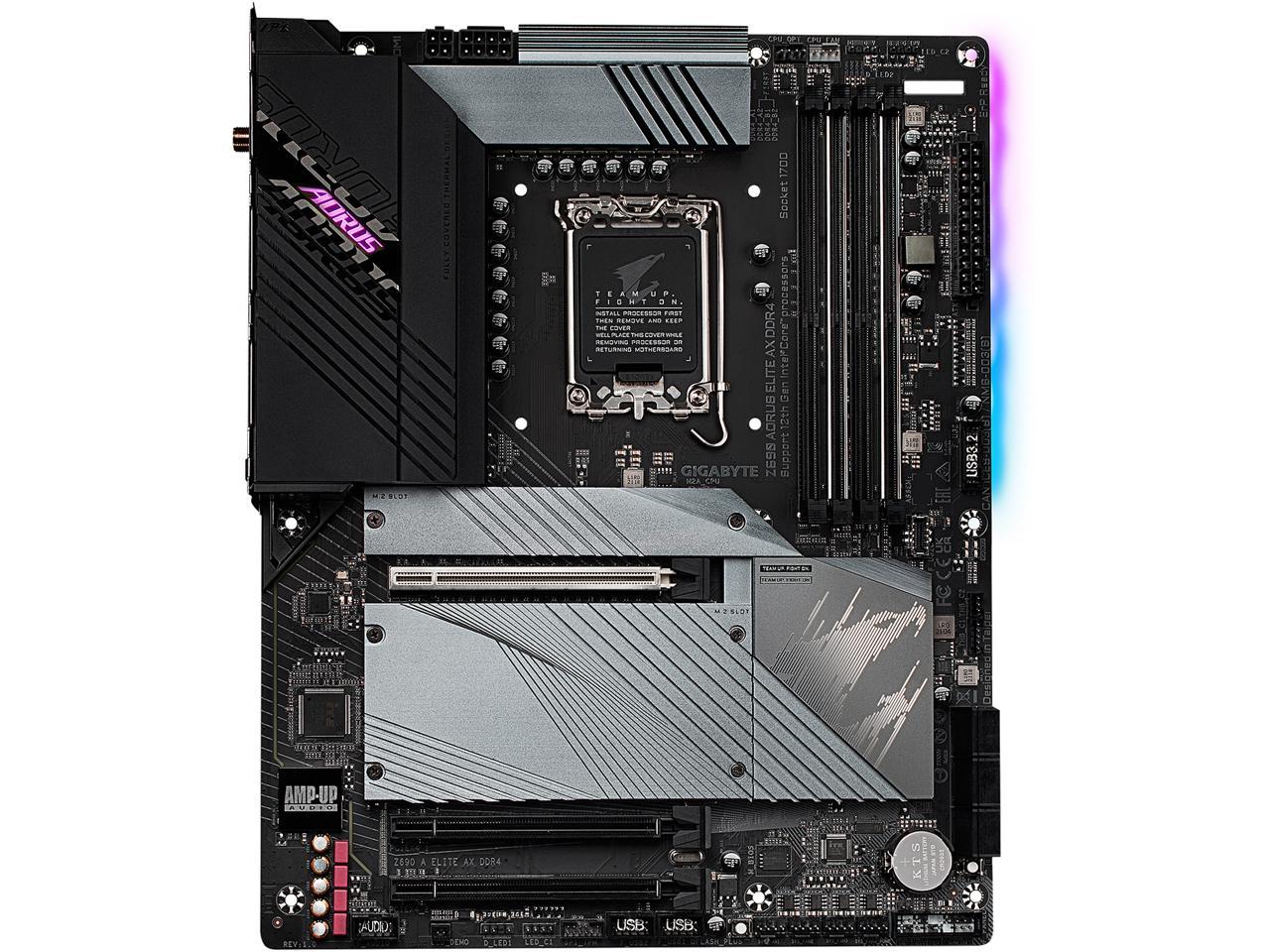 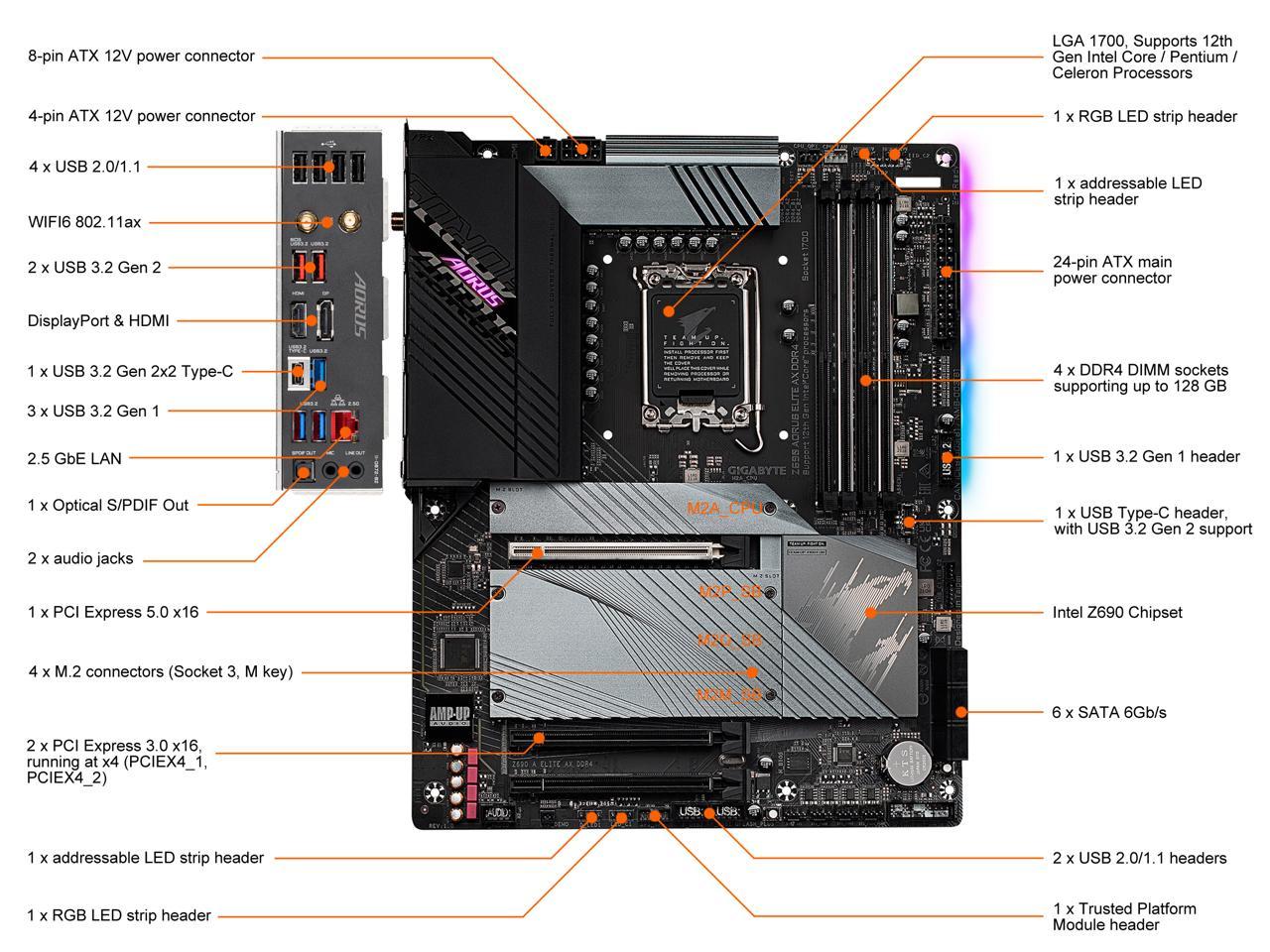 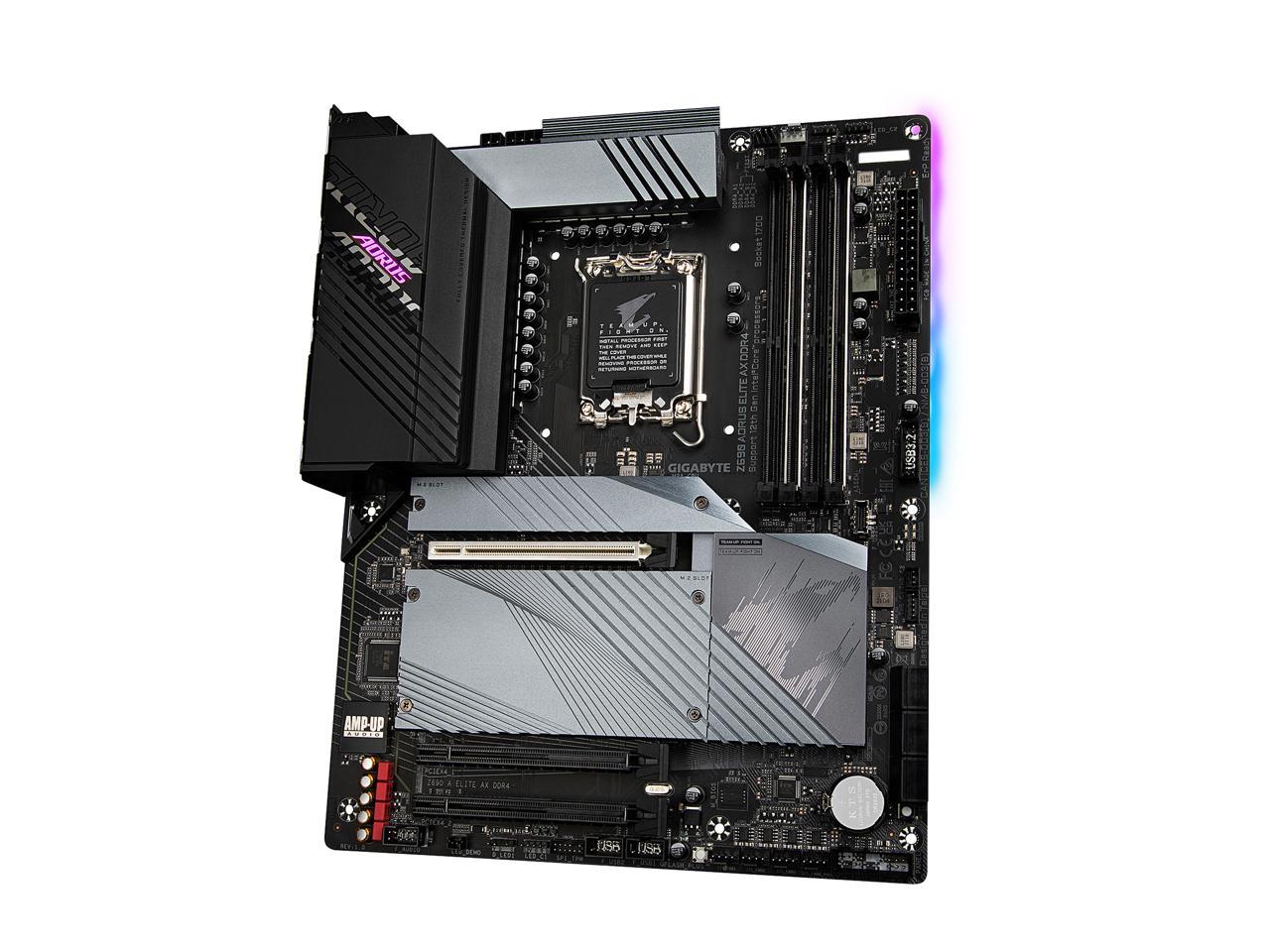 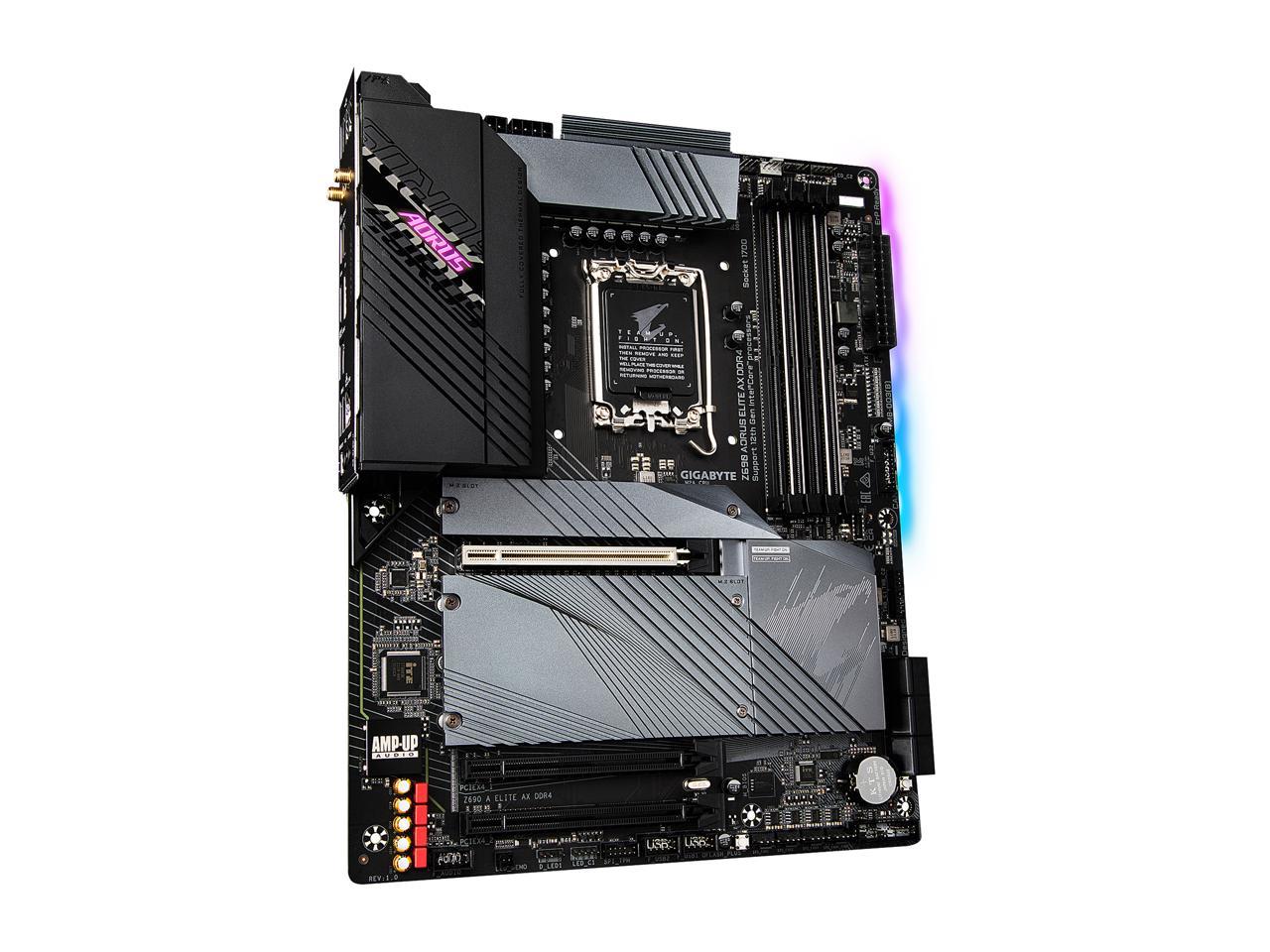 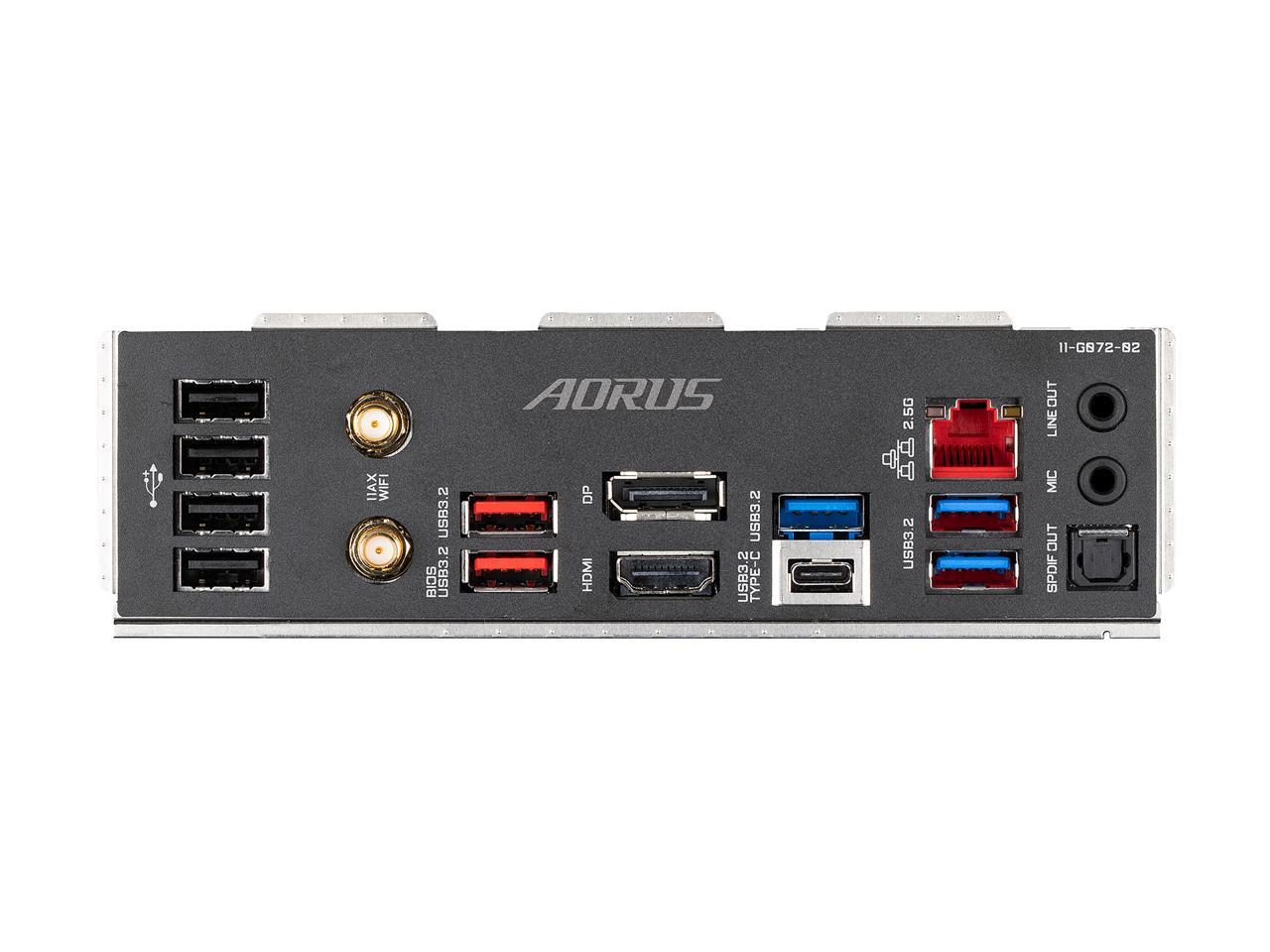 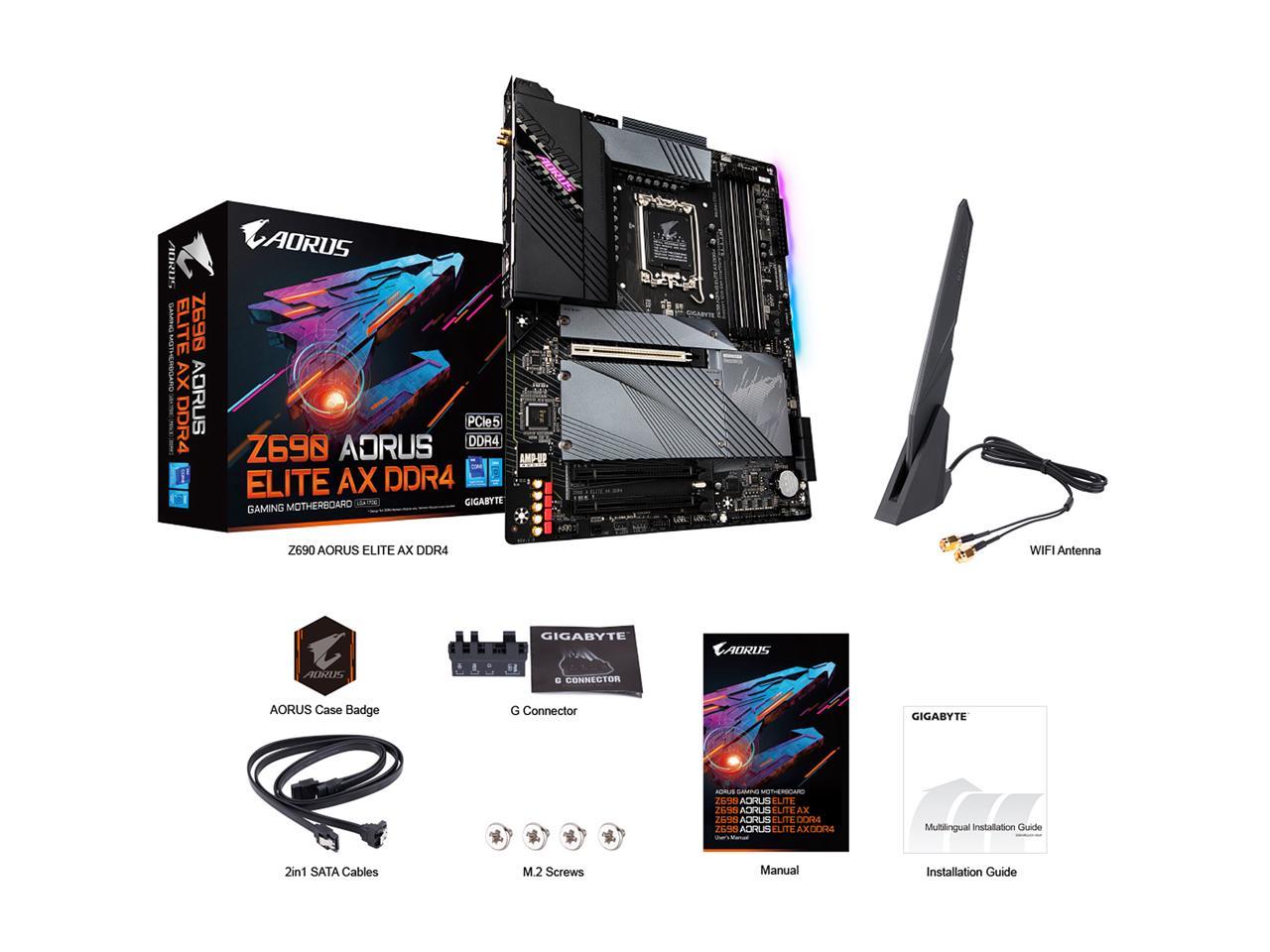 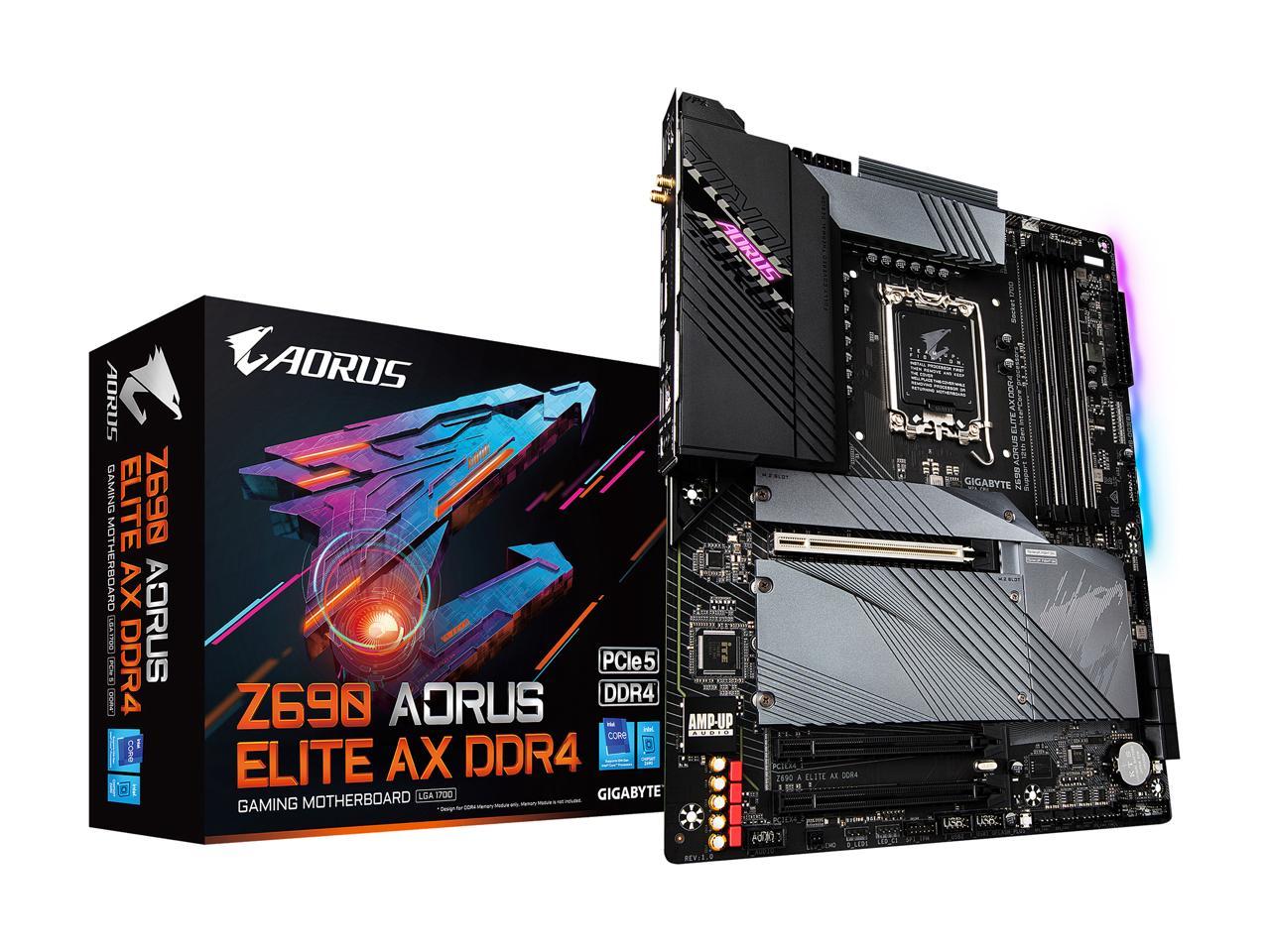 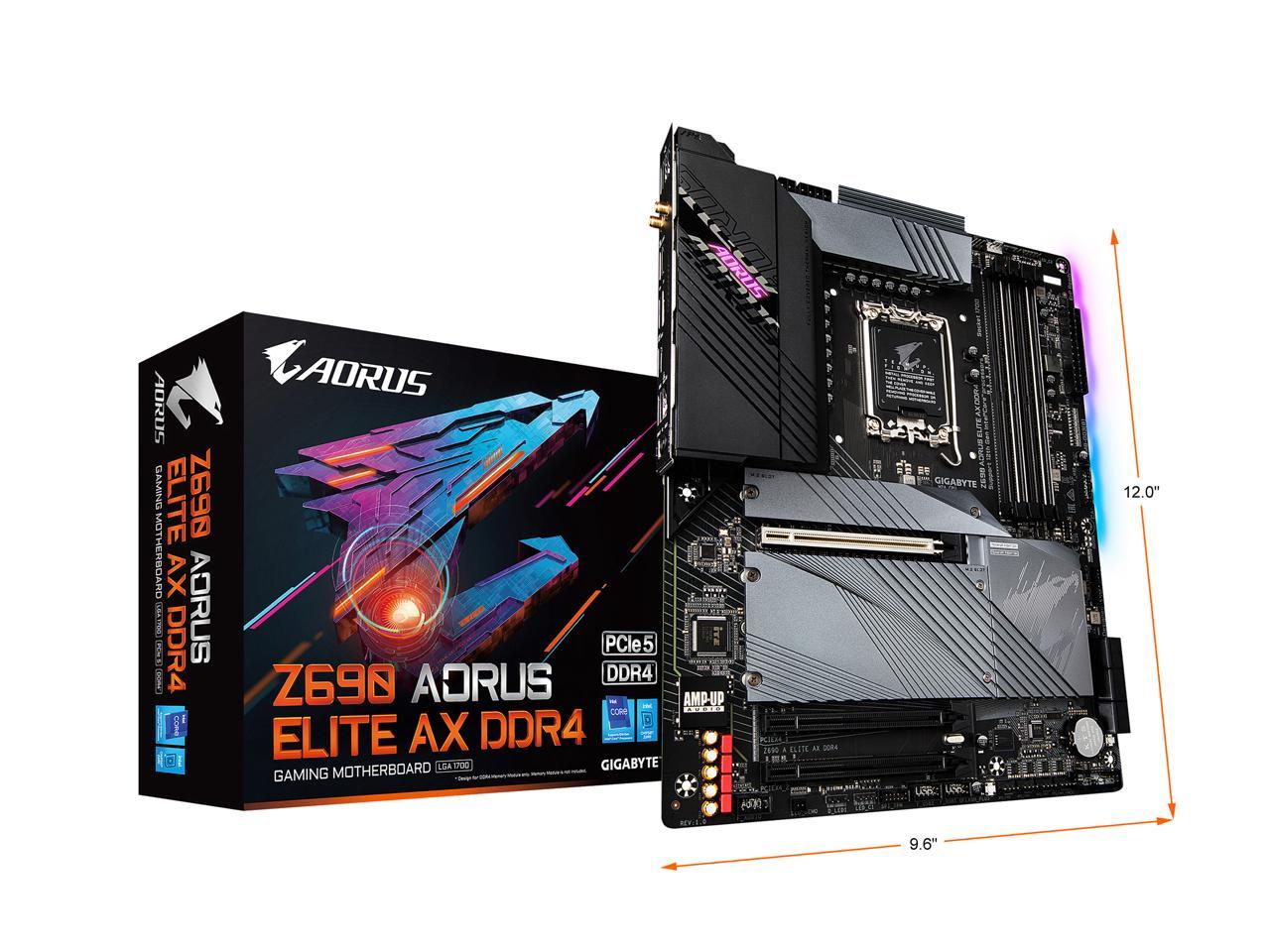 THE NEW KING OF GAMING

Rule supreme with the GIGABYTE Z690 AORUS gaming motherboard. It is constructed with innovative features to unleash the full potentials of the latest 12th Gen Intel Core processors and the upcoming PCIe 5.0 devices. Supercharge connectivity with Wi-Fi 6, 2.5 GbE LAN and USB 3.2 Gen 2x2 Type-C. Lags will not hold you back again.

To ensure maximum Turbo Boost and overclocking performance of Intel’s new generation CPU, GIGABYTE Z690 series is equipped with the best VRM design ever built with the highest quality components.

For CPU integrated with GPU performance

GIGABYTE Z690 Motherboards are ready to work with the upcoming PCIe 5.0 devices which are expected to experience double bandwidth than the current PCIe 4.0 devices. To reach the high speed and maintain good signal integrity, GIGABYTE R&D uses the low impedance PCB to provide the maximum performance.

AORUS is offering a tested and proven platform that ensures proper compatibility with profiles up to 5333 MHz and beyond. All users need to do to attain this performance boost is to ensure that their memory module is XMP capable and that the XMP function is activated and enabled on their AORUS motherboard.

All memory routing is under the PCB inner layer shielded by a large ground layer to protect from external interference.

The maximum memory capacity on the Z690 motherboard is 128GB. After Intel updated the memory reference code, a single slot can support up to 32GB. Therefore, with populated 2 DIMM per channel on both channel, total memory capacity is 128GB, which was only available on High End Desktop (HEDT) platforms. For users who always run out of memory capacity, there is more bandwidth now for memory-intensive application such as rendering and video editing.

Increased surface area up to 2X larger compared to traditional heatsinks. It improves heat dissipation from the MOSFETs.

TMOS features several channels and inlets on the heatsink. This design allows for the air flow to go through which leads to a great improvement of the heat transfer performance.

The M.2 Thermal Guard II uses a double-sided heatsink design and prevents throttling and bottlenecks on high speed M.2 SSDs by dissipating heat before it becomes an issue.

By adopting 2x copper on PCB inner layer, it lowers the components' temperature at least 3% by turning the PCB into a super thin PCB size copper heatsink to dissipate the heat from the components effectively, due to its high thermal conductivity and lower impedance.

Smart Fan 6 contains several unique cooling features that ensure gaming PC maintain its performance while staying cool and quiet. Multiple fan headers can support PWM/DC fan and pump, and users can easily define each fan curve based on different temperature sensors across the board via intuitive user interface.

Each fan headers support PWM and DC fan and Water Cooling Pump, and up to 24W (12V x 2A) with Over-Current Protection

First adopter on 2.5 GbE LAN onboard

2X Faster than ever

Featuring the USB 3.2 Gen 2x2 design which is doubled the performance than previous generation of USB 3.2 Gen 2. It works up to 20Gbps ultra-fast data transfer while connecting to USB 3.2 compliant peripherals. Through the USB Type-C connector, users can enjoy the flexibility of reversible connection to access and store massive amounts of data rapidly.

Hi-Res Audio certified, meaning that the product is capable of reproducing frequencies up to 40 kHz or above which ensures users with the best audio quality at all times.

GIGABYTE's EasyTune is a simple and easy-to-use interface that allows users to fine-tune their system settings or adjust system and memory clocks and voltages in a Windows environment. With Smart Quick Boost, one click is all it takes to automatically overclock your system, giving an added performance boost when you need it the most.

With GIGABYTE Q-Flash Plus, you don’t need to install CPU, memory and graphics card nor enter the BIOS menu to flash the BIOS. Just download and save a new BIOS file (rename to gigabyte.bin) on the USB flash drive, then press the dedicated Q-Flash Plus button and you’re good to go!

* Photo for reference only.

* Power Stage maximum current capacity is based on VCORE Phase.

Overall Review: Even on the lastest BIOS, this motherboard can't run any of the XMP profiles on my Patriot Viper Samsung B-Die kits which are set at 3866 and 4000 mhz. I am forced to lower the frequency of my RAM all the way to 3200 just to get the motherboard to post. I would not recommend this motherboard.

Pros: - works after all the hassle...

Cons: - did not boot out of box. Need to flash BIOS to F6a and clear CMOS multiple times to make it post - no debug LED

Pros: Robust BIOS, amazing board layout really clean and easy to work with, all the m.2 slots you'll ever want or need, lots of fan and RGB headers,

Cons: Early adopter woes. Out of the box, the board came with the F3 BIOS which did not want to work with my RAM, especially trying to run XMP. After upgrading to F6 things vastly improved, but that's kind of the price you pay to jump on early. Lots of single use plastic here. Every m.2 screw comes in its own individual bag. Seems like a waste. Why not just put all three screws into one bag, or even better, pre-screw them into stand offs? The abysmal Gigabyte software STILL tries to trick you into installing malicious software like Norton, which is trying to push crypto. Why is that auto-selected by default? It's been that way for years. Be better, Gigabyte.

Overall Review: Great board, just be prepared to upgrade the BIOS before you really do anything. But seriously, Gigabyte, stop trying to force third party software applications on us. People don't like prebuilts for a reason, and part of that reason tends to be endless supply of bloatware they come with. Don't encourage that.

Pros: Lots of m2 slots and fan headers. Lots of other connections

Cons: Took me a while to get it to post with my memory thats on qvl. I had to install one stick in a1 and set xmp in bios then put the other stick right next to it in b1 slot. Wont post with mem in a2 and b2 slot like it recommended in manual. Updated bios to f6 and some issues went away. I thought I had a dead board or cpu when it wouldnt post.

Overall Review: Other than the cons listed above its a decent board and I have it running stable now.

Pros: -Performs well for out of the box configurations -4 M.2 SLOTS!!! -Audio solution is considerable -Memory compatibility is fairly good on F6 Bios.

Cons: -The included RGB seems fairly cheap, no diffusion on the strip. -Original bios F4 has AWFUL RAM compatibility, REQUIRES a bios update out of the box for optimal setups.

Overall Review: I'd say this is an excellent choice for someone who wants to purchase a solid board as far as the hardware goes while not going to hard on the overclocking, even more so if you plan on disabling the RGB on this board.

Overall Review: Great motherboard for the price. As long as you update the bios this motherboard works perfectly as advertised.

Pros: -Great connections and features like having ample board fan connectors, both ARGB and RGB headers, easy to setup - Solid board feel - the best I have owned in years -Aorus branding looks pretty cool

Cons: -Terrible BIOS -I installed Win11 and cannot get the Intel RAID on 12th gen installed so no RAID Drives (Intel problem I guess) - Poor support -Memory modules not going beyond 2300 speed - I have 3600.

Overall Review: - A lot of issues out of the gate but that is what I get for 12th Gen change - A lot of features like 4 M.2 gen 4 drives kicks *** - I think once the issues are fixed this board is a great buy at this price compared to competitors - If you can live with the problems for 6-8 months this board will come around as a great buy

Pros: The PC posted on the first try. No memory issues on my end. 4 NVMe slots. Good layout of ports. I had no issues with the actual computer operation.

Cons: Looks cheap in person, IMO. Bios had to be updated, not a huge deal, but what the heck? Didn't they make motherboards for like 20 years? How can they release a product that doesn't see your storage drives out of the box? Rushed. I also didn't like the BIOS look and layout. RGB is terrible all around. LEDs on the right side of the board are terrible, dim and inconsistent with 3 out of 8 LEDs having noticeably different color tone from the rest. For example, if set on all red, 3 lights in random sports look purple. Plus there is no defusion, so you see 8 distinct LEDs like it's a cheap LED strip glued to the back of the board. The AORUS logo is also dim, and reflects on the backplate. It all looks terrible. They can be turned off, but we pay for those features regardless. And then there is their RGB software... I haven't seen such a terrible piece of software in years. It's extremely limited and ugly.

Overall Review: I thought this board was the best value for the money, and it may be so, as it includes a lot of very nice features, but they had to cut corners somewhere, and it shows. It doesn't feel premium like you would expect from AORUS brand, and it feels rushed, with buggy BIOS and terrible RGB implementation. It did work for me, on a technical level, so a computer felt fast and reliable, but the issues I mentioned in the cons forced me to return it. I ultimately decided to wait for more options to become available, so I'm not getting another Z690 right now, but if I was I would probably consider an MSI Tomahawk or ASRock Extreme. I don't think I'm ever getting anything from Gigabyte again, as far as I can remember there was always something wrong with every single product of theirs that I tried. I should have trusted my gut and avoided this board too.