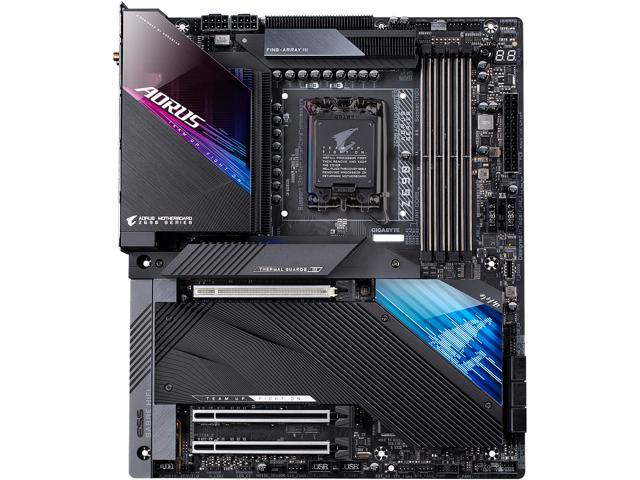 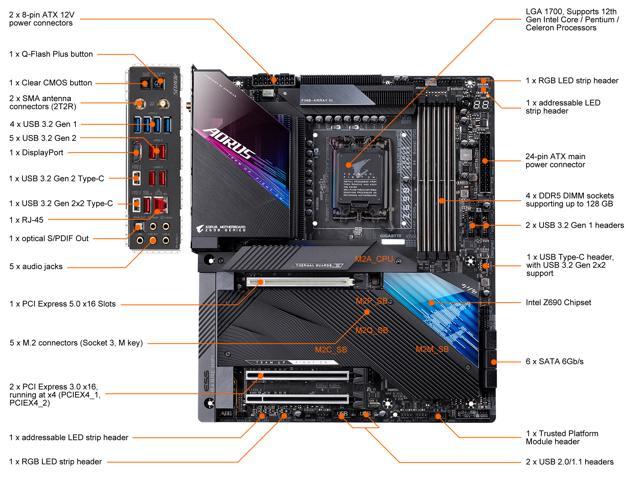 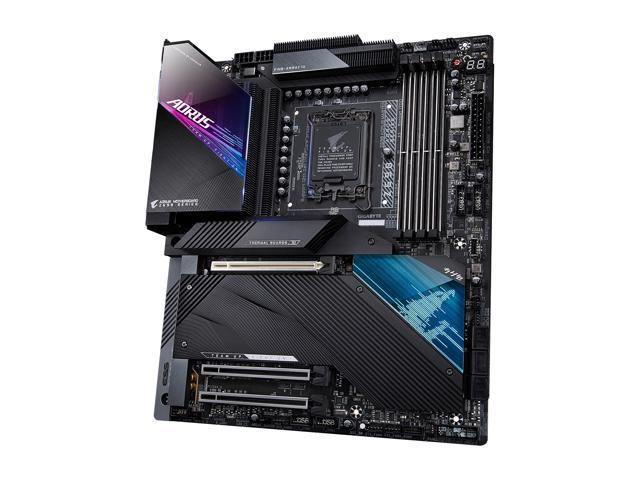 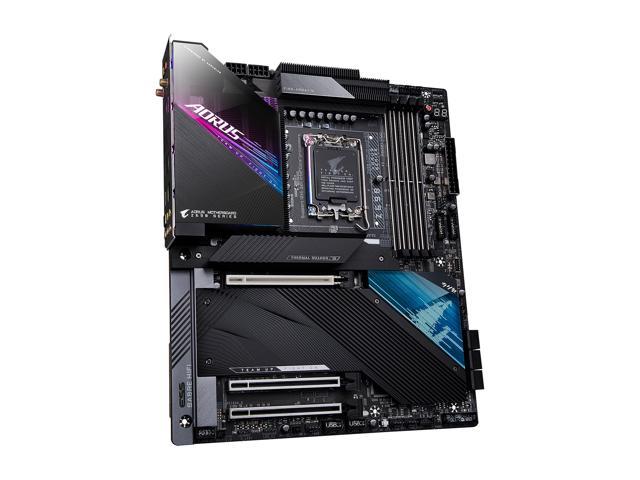 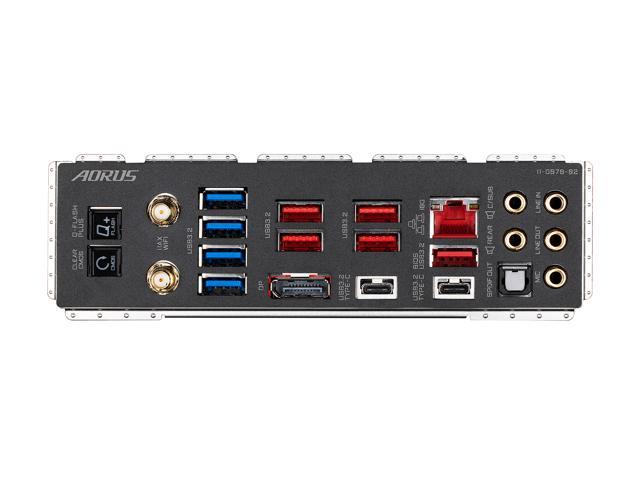 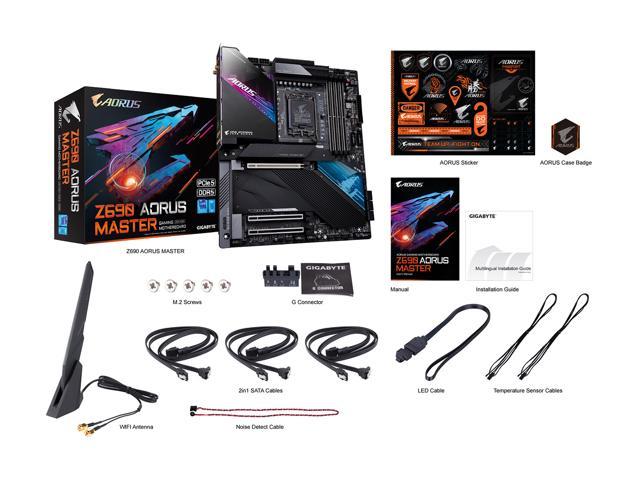 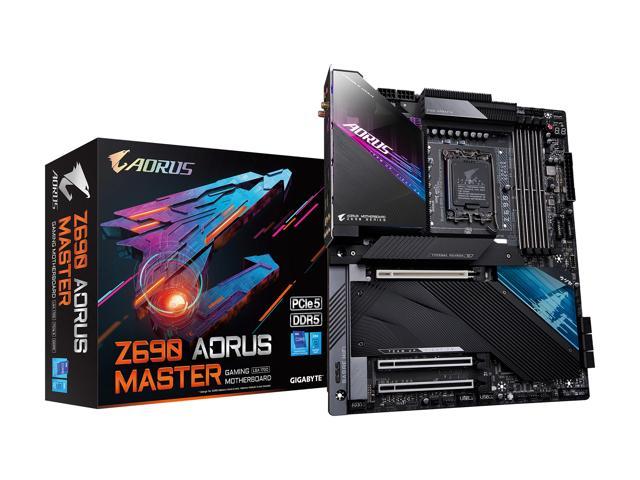 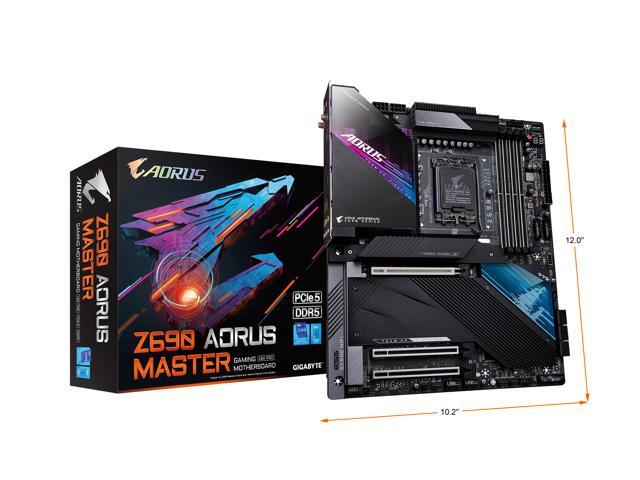 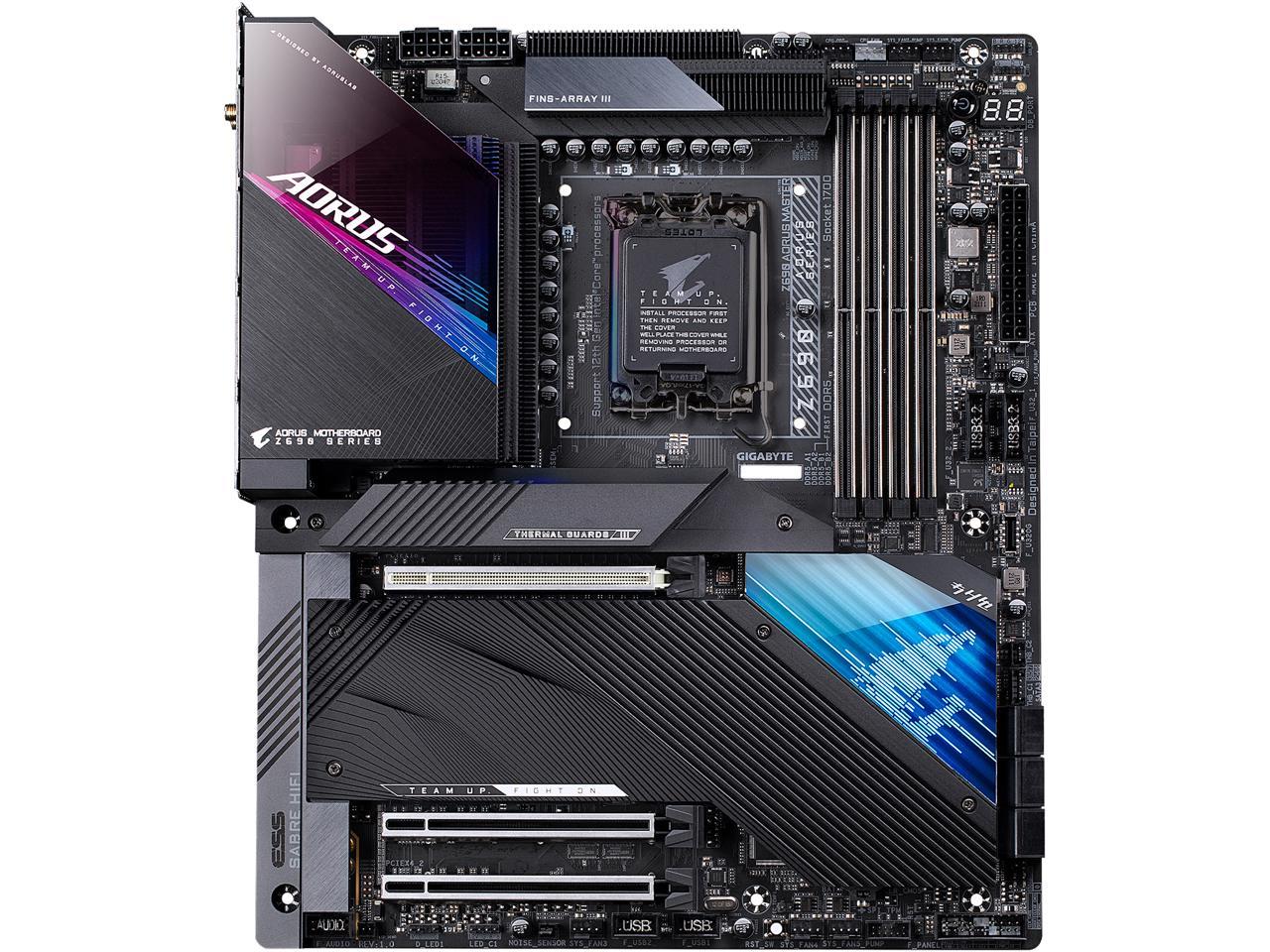 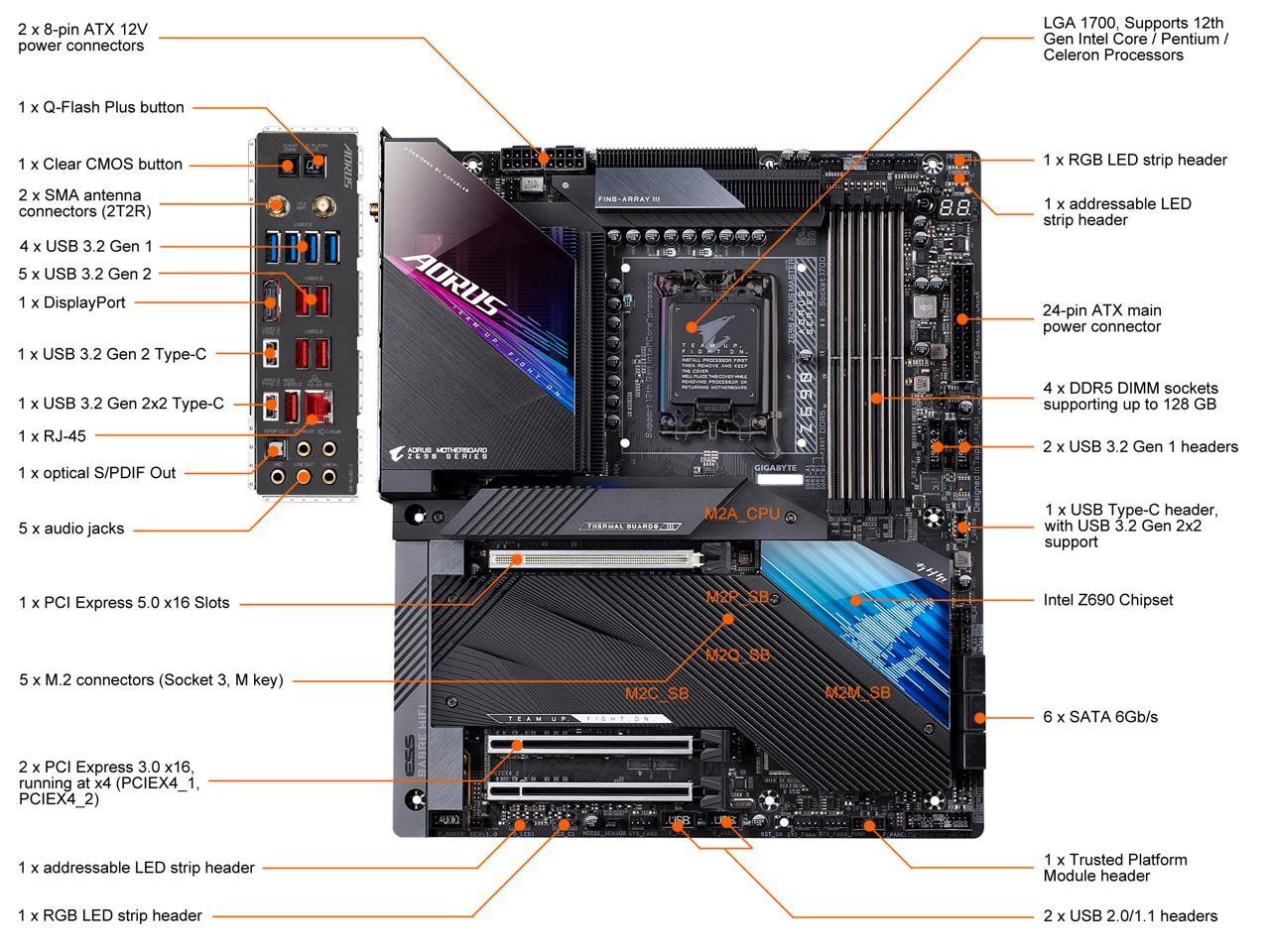 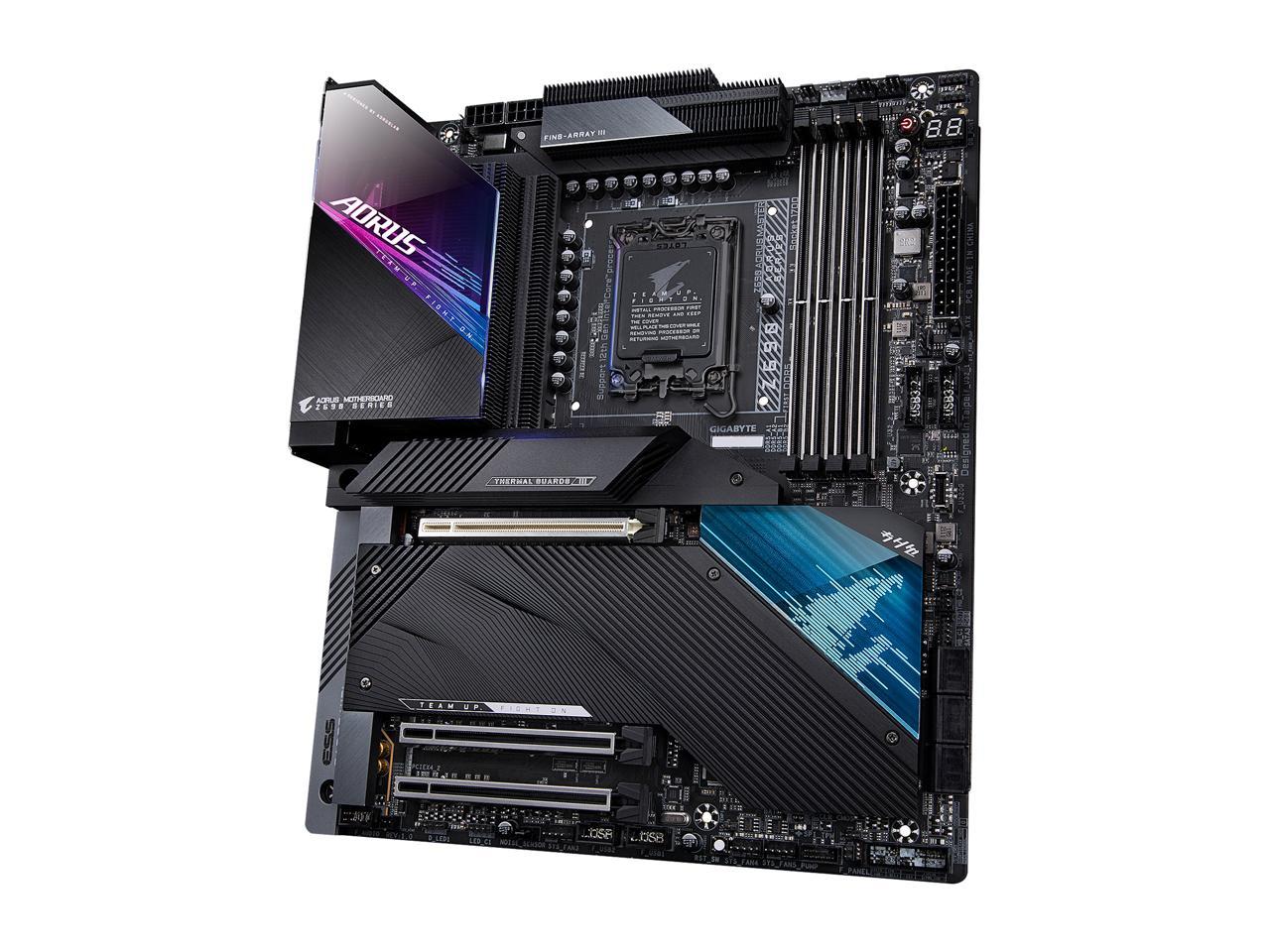 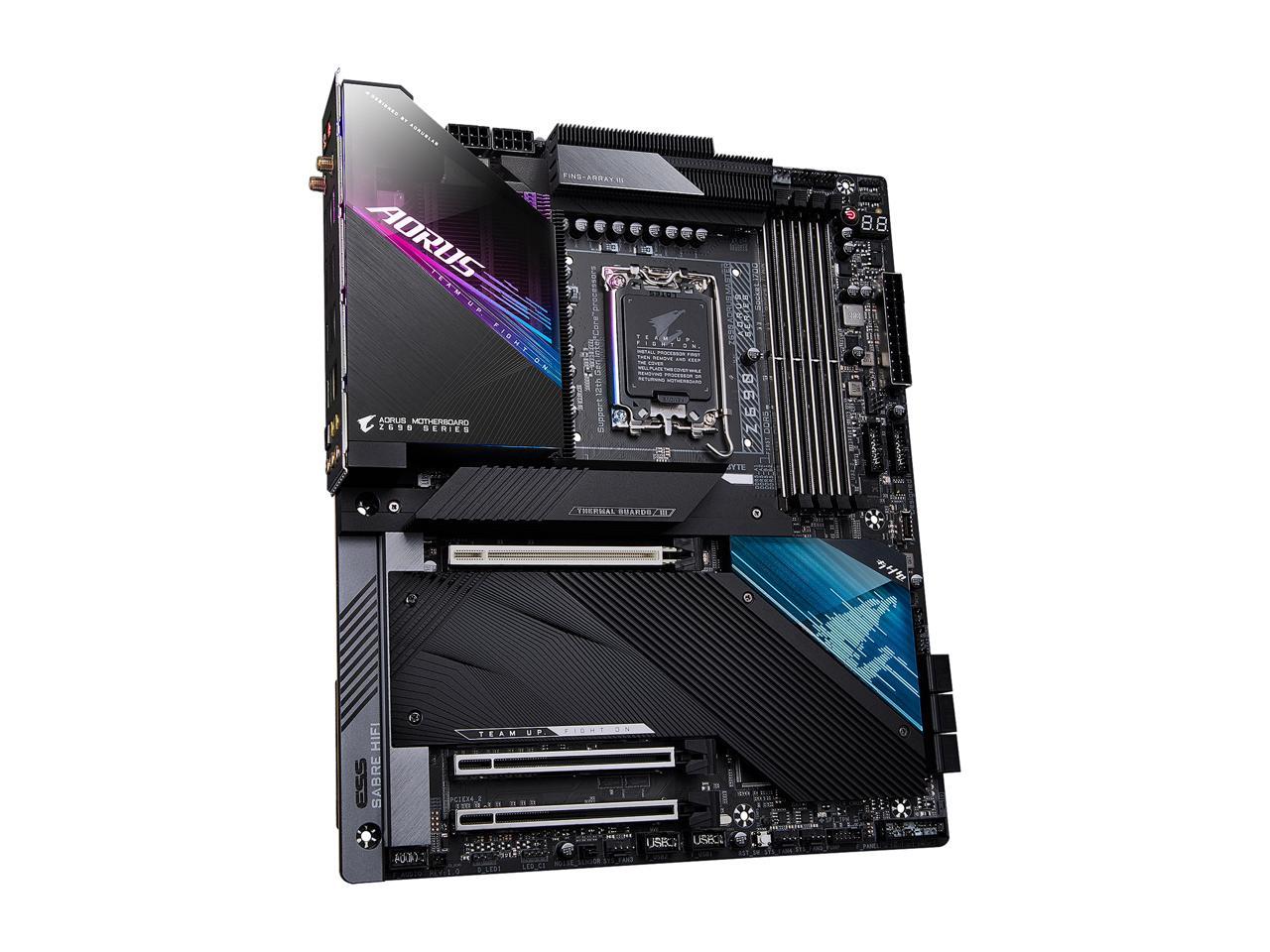 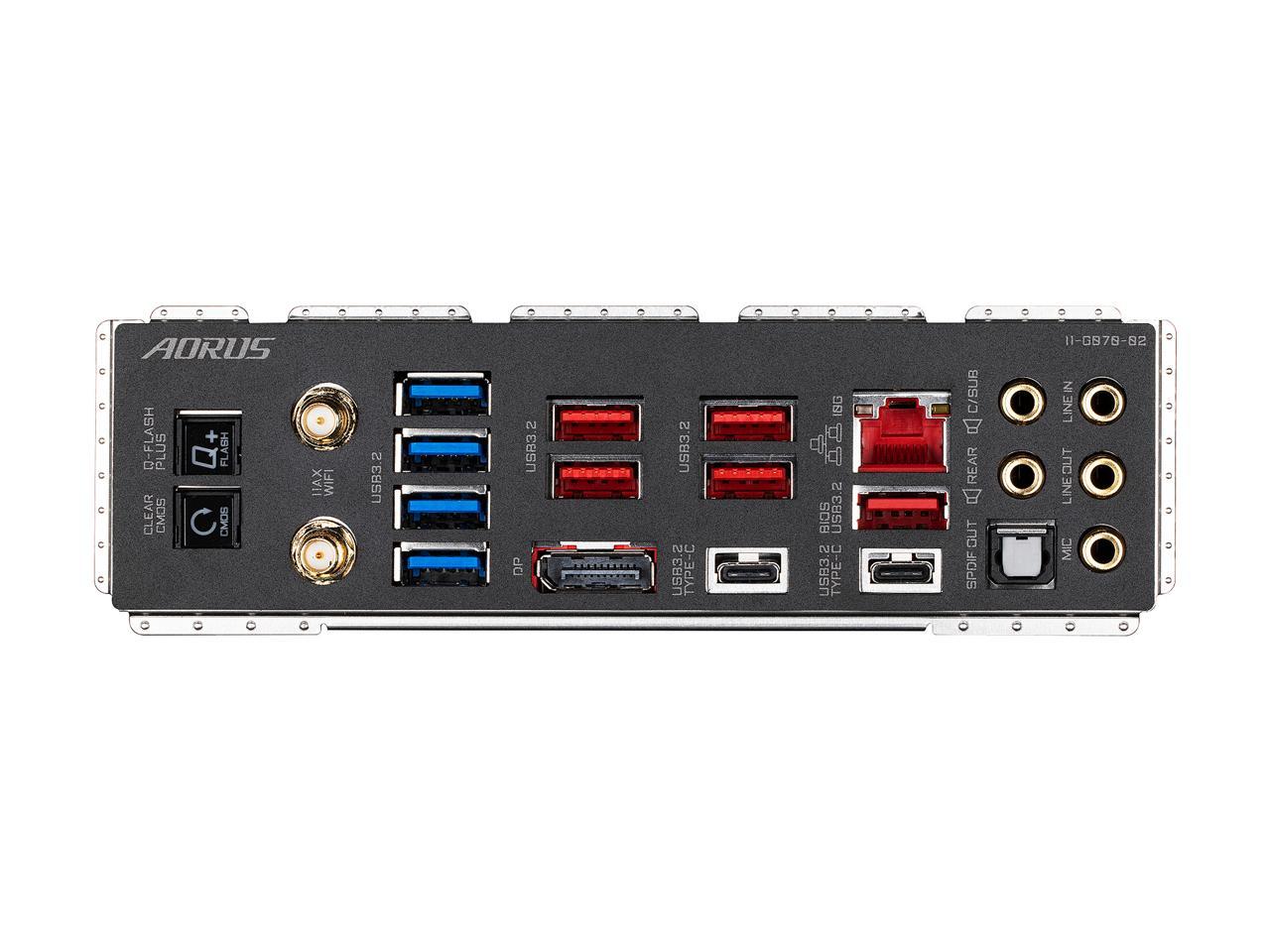 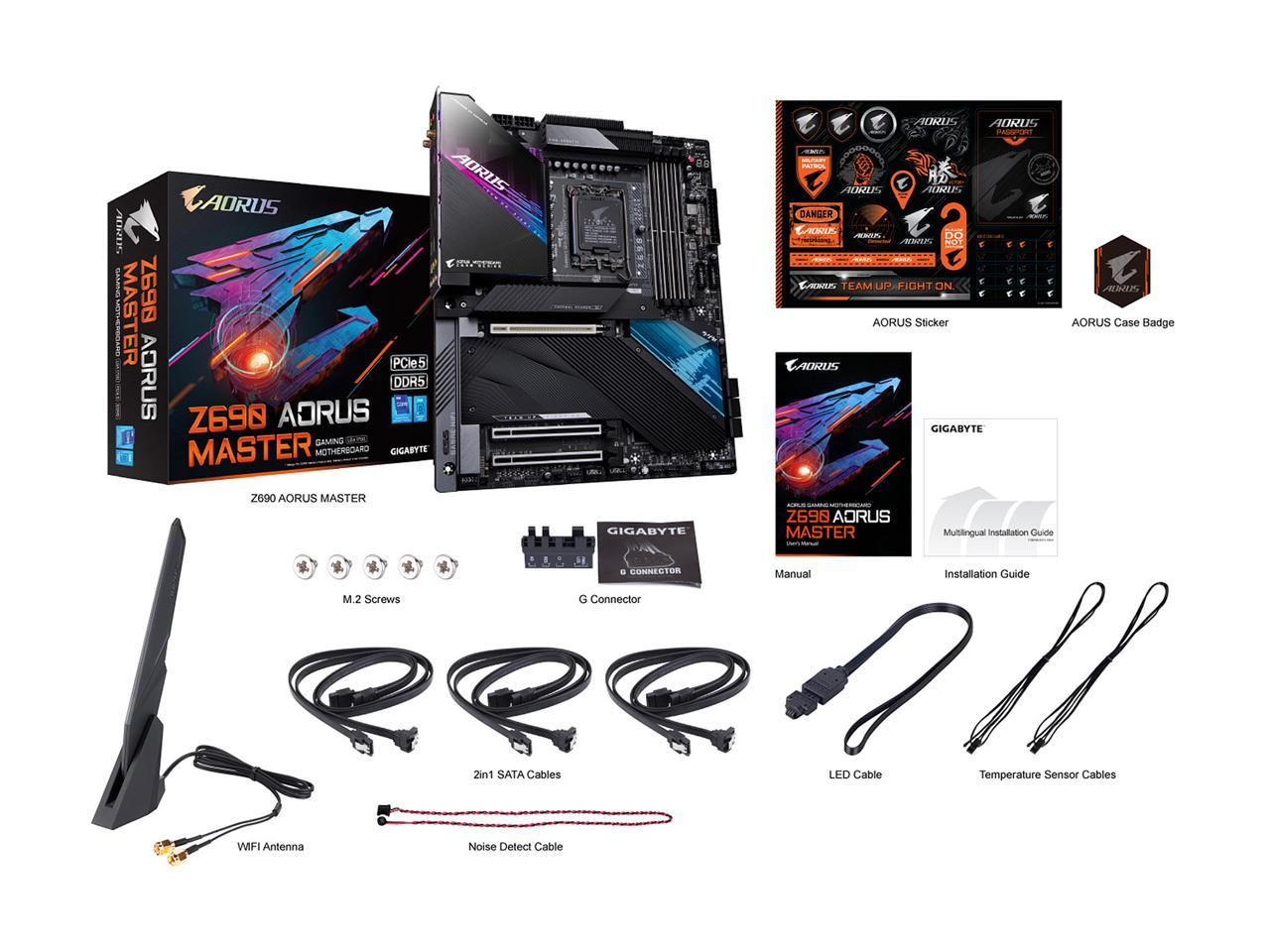 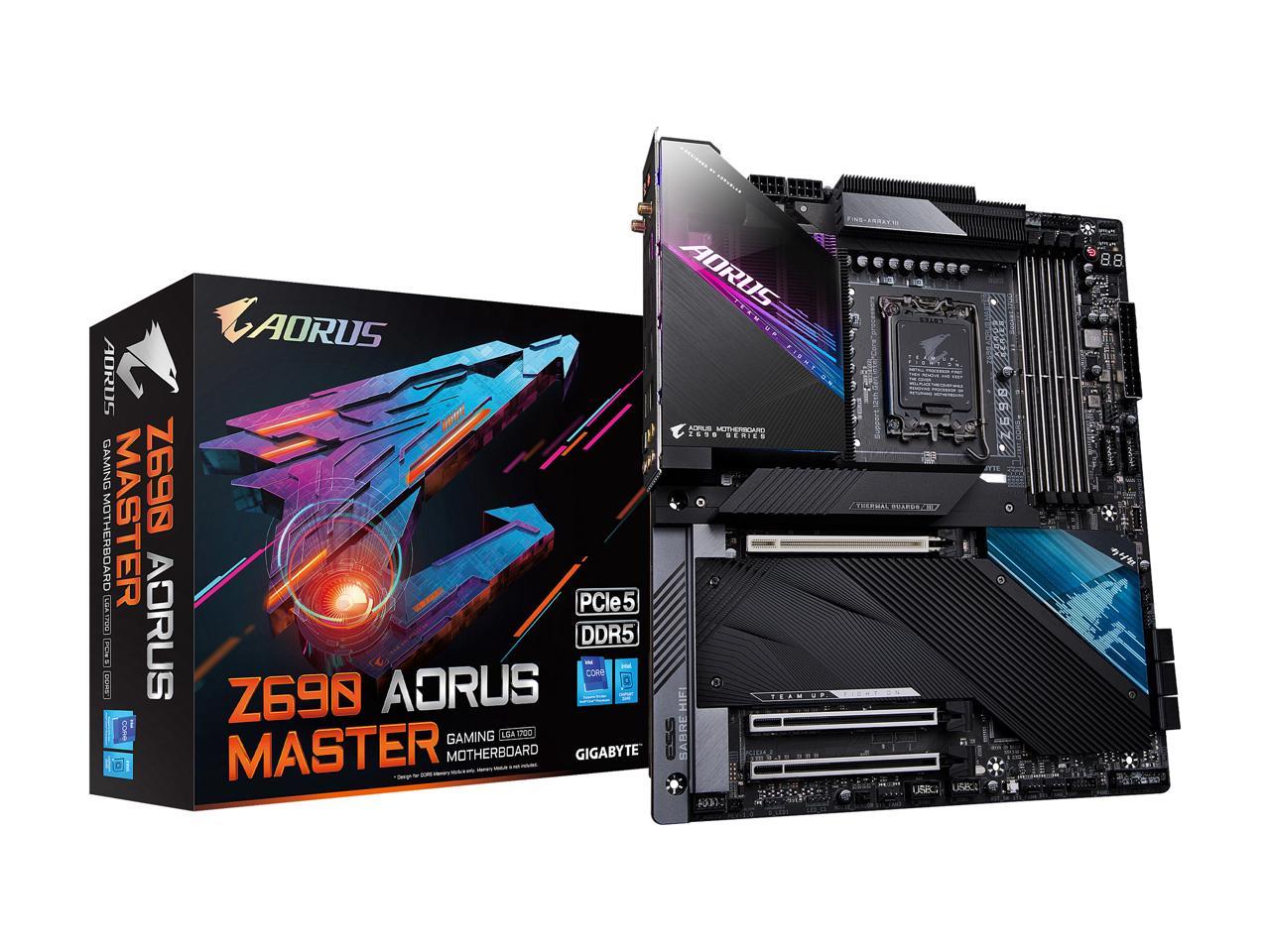 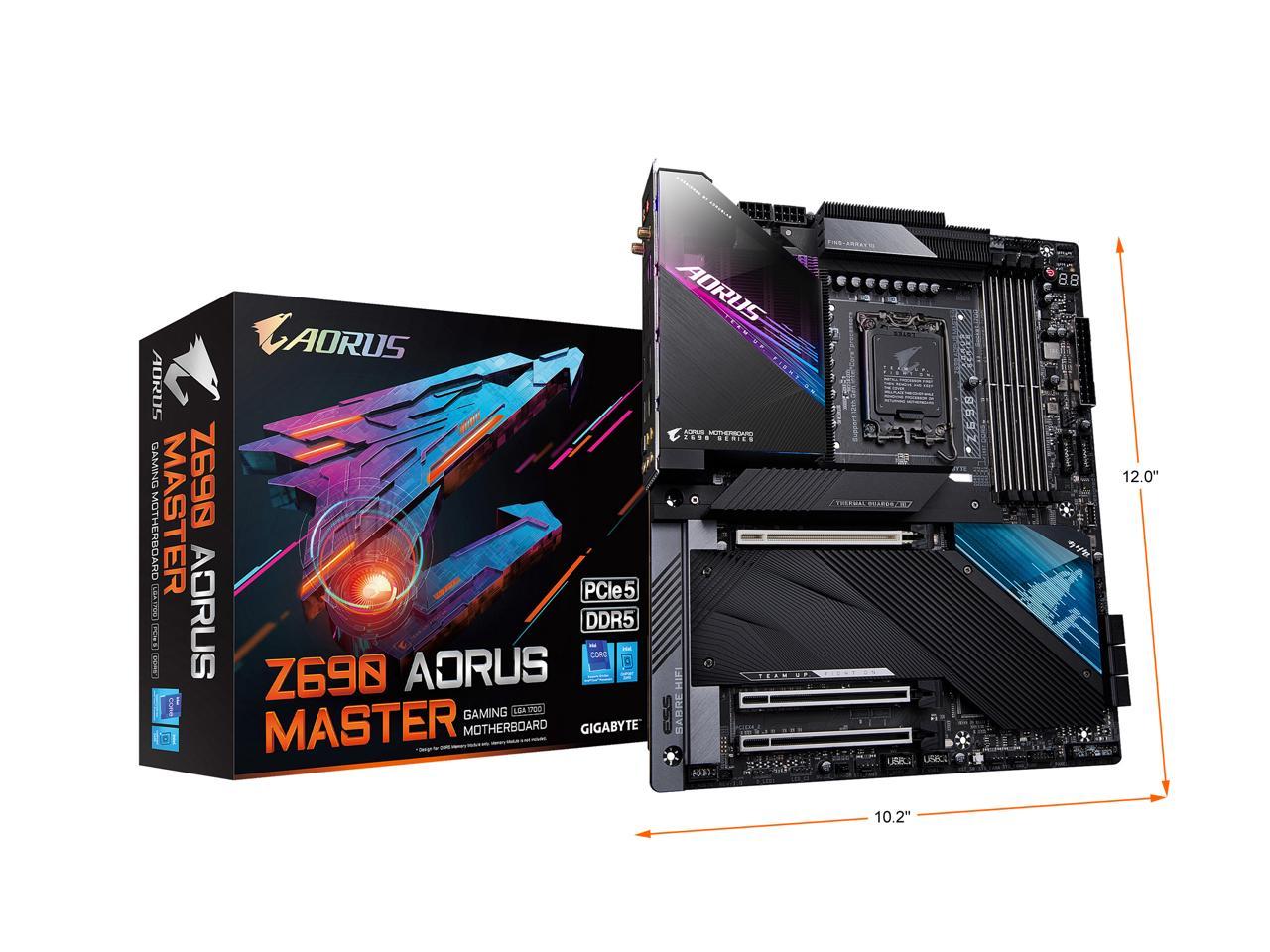 Pros: Beautiful board, lots of features.

Cons: How did this board not recognize M.2 with the default bios?? Come on Gigabyte...still love you.

Overall Review: Falsh the Bios immediately. Ill save you some time, if you try to flash lusing a USB 3.0 stick it will give you a drive not found error. You have to use a USB 2.0 stick. Also dont forget to put the USB 2.0 stick in the specific usb port in the back of the I/O panel. Only add the bios file to your EXFAT or FAT 32 formatted USB 2.0 stick. Gigabyte, spread the info. I spent over 6 hours trying to figure this all out.

Overall Review: Will not disappoint, I will point out that you must upgrade the bios through Q flash before trying to Boot for the first time.

Pros: As soon as I took this motherboard out of the box and held it, I realized I had made the right call. This is the nicest motherboard I've ever owned and my first one with a back plate. To sum it up in one word: quality. I overclocked my i9-12900K to 5.3 GHz on all cores no problem, reaching 11,922 in CPU-Z (864.5 single thread) with a maximum temperature of 84 Celsius. I'm actually not sure how much of this has to do with the CPU vs. the motherboard. For my prior setup (with a 11700K), any time I tried pushing the CPU the whole system would crash and restart. For this setup, I plugged in both CPU cables to make sure the 12900K has plenty of power. Do note this motherboard allows my CPU to draw 226 Watts when I'm running benchmarks.

Cons: Ok so I promised myself that, if I got this motherboard to work, I would pay it forward and write a review so others know how to get this thing to post/boot as well. I installed the motherboard on a Saturday morning and wanted to just flash the bios (per the advice of others' online reviews) so that, when the rest of my parts arrived, I'd be ready to go. I installed the motherboard, all the cables, and left the CPU, m.2, and RAM vacant. I inserted the USB thumb drive, hit the QFlash+ button and... nothing happened. I then went to a friend's house to format the USB drive again and try again. On attempt #2, nothing happened. Then I went back to the same friend's house and followed an online video detailing how to completely clean a thumb drive and clear the partitions. I then drove back home, inserted the USB drive, clicked the QFlash+ button and... nothing happened. I then installed my CPU, AIO cooler, RAM, and one m.2 drive. This time, the computer actually booted/posted but I got an error code that my RAM wasn't recognized (I forget the code number the motherboard showed at the time). I ignored the code, inserted my USB drive again, and hit the QFlash+ button. Once again, nothing happened. Many reviews mentioned having to completely remove the CPU, m.2, and RAM but I really did not want to do that given my AIO cooler had pre-applied thermal paste and I didn't want to make a mess and risk damaging my $600 CPU. So I only removed my two sticks of RAM (left the CPU and m.2 installed), turned off my power supply, turned it back on, inserted my USB thumb drive, and hit the QFlash+ button. Viola... for the first time, it actually started flashing. Within about 10 minutes' time, my motherboard BIOS was updated. Shortly thereafter, I installed my two sticks of RAM again and I was ready to go. Why did I write this long review? Because getting this motherboard to post was extremely frustrating and, I will admit, the thought of simply returning it crossed my mind multiple times. It's incredibly frustrating to spend so much money and then sit in your living room wondering whether you're doing something wrong or if you're hardware is defective. What worked for me: 0. Turn off power supply 1. Install motherboard 2. Install CPU 3. Install m.2 4. Do NOT install RAM sticks 5. Completely/clean partition USB thumb drive (not just format) 6. Add BIOS files to drive, rename to GIGABYTE.bin 7. Turn on power supply 8. Insert thumb drive into the USB drive by the Ethernet port 9. Hit QFlash+ button I believe the BIOS version I am using is F8a and it's working great.

Overall Review: Love the motherboard but getting it working was pretty frustrating. By the way, I use this setup for a flight simulator (Prepar3D 5.3) and now I am able to fly at maximum settings/graphics. Paired with my RTX 3090, I average about 100 FPS even in urban settings with my third-party aircraft add-ons. Even in cities and inside the virtual cockpit (the most demanding scenario in the simulator), I typically get at least 60 FPS (5120x1440 resolution), which is pretty much unheard of in the world of flight simming.

Pros: - WAN is really fast - Lots of room for SSD/M2/HDD (I have 5 installed) - Heat sinks will keep dust off of the M.2 NVME's - My 5.1 home theatre audio sounds much better than it did on my last board (and got even better after upgrading to Windows 11)

Cons: - RGB Fusion is the absolute worst in the industry, and the bar isn't very high to begin with.

Overall Review: All around great board but if RGB support is critical don't buy any Gigabyte products

Pros: 1. VRMs never get out of the low 40s even under substantial load/5.2 P core overclock. 2. Lots of 4.0 M.2 drive connectivity 3. Lots of USB connectivity - USB 3.2 Gen 2x2 support 4. Top notch components all the way around. 5. I would have given this board 5 eggs if it were not for the bios issues listed below.

Cons: 1. I have never experienced a motherboard that has shipped from the factory with a bios that was incapable of supporting the generational hardware that it was designed to embrace. 2. I have purchased multiple Master MBs that have had faulty "Q Flash Plus" utilities right out of the box (four of them) . Considering my first "con" above, without "Q Flash Plus" you basically have a brick on your hands.

Overall Review: Fantastic motherboard once you get it to post. Its a rock-solid board on which all of my components run extremely stable and nice and cool. It has a ridiculous VRM set up.. I cant imagine what you would have to do to even come close to maxing it out (simply overkill). On the other hand (Per my comment #1 in the "cons" section) the fact that Gigabyte has been shipping boards with insufficient bios versions from the factory is almost unforgivable. Seriously, every time I see a review (just look at some of the others here) where someone has spent days trying to troubleshoot their setup only to find out that its the factory shipped "boat-anchor bios" issue...Well, lets just say it makes me want to go to Gigabyte headquarters and waste several days of the CEO's time and see how he likes it. As a computer builder, securities trader and online seller of various goods -TIME IS MONEY- and If i did not have a small network of other functioning builds, my experiences with the Gigabyte Z690 boards (especially early on) would have cost me a substantial chunk of change. ...My point: When I buy a brand new motherboard, I want it to function as intended, fully supporting the hardware that it was manufactured to support. Im not sure if Newegg received a bad batch of these from Gigabyte or what ( Addressing my comment #2 in the cons section) but the ones that I have received from them have all been revision 1.0 boards, the ones I have purchased elsewhere have been revision 1.1 boards and at least I haven't had any non-functioning "Q-Flash Plus" utilities on those. In conclusion, Ive been a bit of a Gigabyte Fan-Boy for quite some time.... I have not used anything but Gigabyte and/or Aorus boards and GPUs for the last 11 years (with great success)..... However, my experiences with their Z690 MB line up almost sent me elsewhere. Im betting (hoping) that they will sort themselves out and start shipping boards that function properly straight out the gate. But for now, don't even think about assembling your system until you have bench flashed your bare board to the latest bios version using the Q-Flash Plus utility... From my experience, this pertains to all Gigabyte Z690 boards. I have included some benchmarks for those interested and/or looking to compare. The AIDA64 Extreme CPU numbers are during a brief 100% maxed run overclocked to 5.2 on all cores as well as stock clocks. The memory benchmark was done using the XMP 1 profile. My system for reference: Z690 Aorus master (bios 8c currently) - 12900k CPU with E cores disabled - RTX 3090 Aorus Master revision 1, with custom VRAM cooling - G.SKILL F5-6000U3636E16GX2-TZ5K 6000 MHz - Corsair 1600i PSU - Samsung 980 Pro drives - 1.4 liter custom loop - EK block

Pros: -Sleek design -Tons of options, including dual USB 3.x connections for my case's front ports -BIOS is easy to use -Heat sinks on the M.2 drives are nifty, and effective

Cons: -The drive didn't recognize my NVME m.2. drive out of the box, leading to HOURS of troubleshooting before discovering other people had had the same issue, and Gigabyte had issued a BIOS update for it. For a board that was released a few weeks ago, how could it not have M.2 capability already ready? They've been out for YEARS! -No futureproofing for Gen 5 M.2/NVME SSDs -The price was tough to swallow.

Overall Review: I'd still purchase it again, and the overall impression of the board is "premium." Best of luck to anyone searching for DDR5 in order to make use of one!

Overall Review: not sure yet as it's not working

Manufacturer Response:
Dear Customer, Thank you for your comments. We apologize for your difficulty with your GIGABYTE product. Please contact us at support-newegg@gigabyteusa.com with case number 187661 in the e-mail subject line. We will provide personalized service and analysis to help solve your issue ASAP. If the matter is urgent, please send us your contact number, and we will contact you. GIGABYTE VIP Support Team
Anonymous
Ownership: 1 week to 1 month
Verified Owner
Bios issues1/19/2022 3:04:18 PM

Overall Review: Unfortunately this shipped with a corrupted Bios. I was able to qflash it and get it working but that's not something I should have to do on a brand new motherboard. It's good now though.