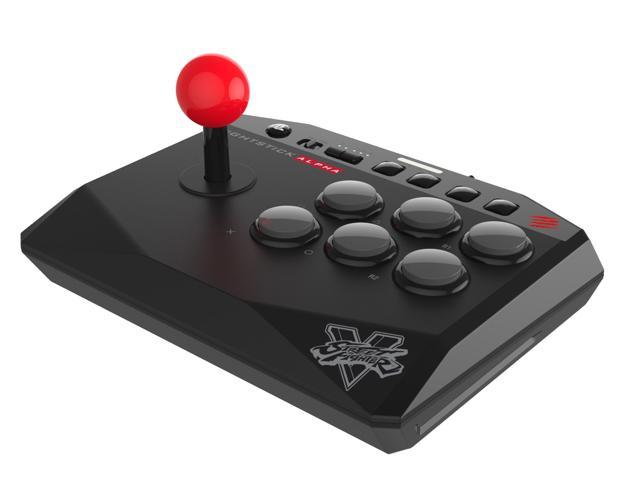 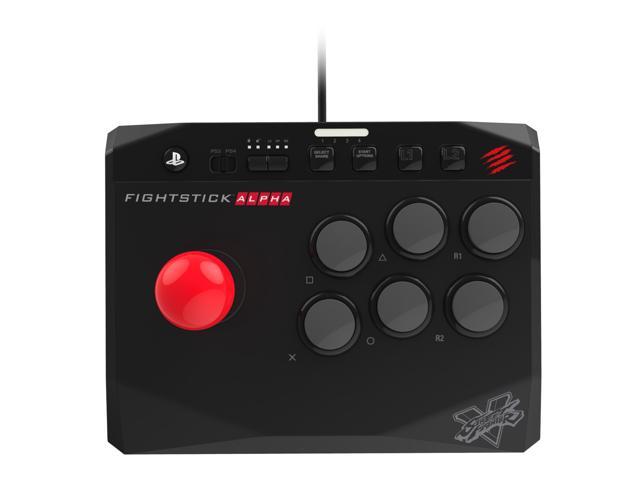 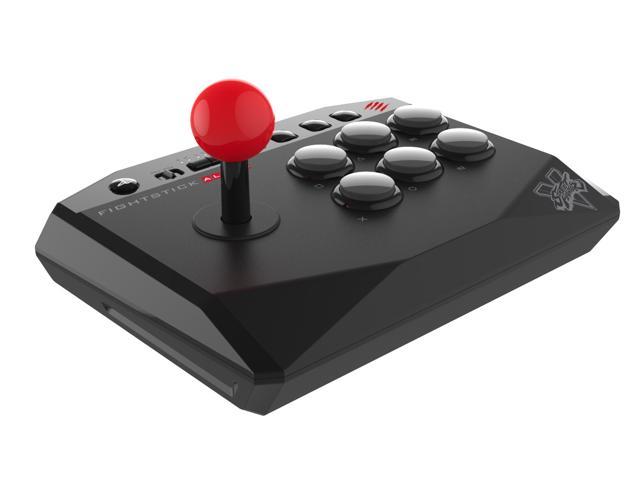 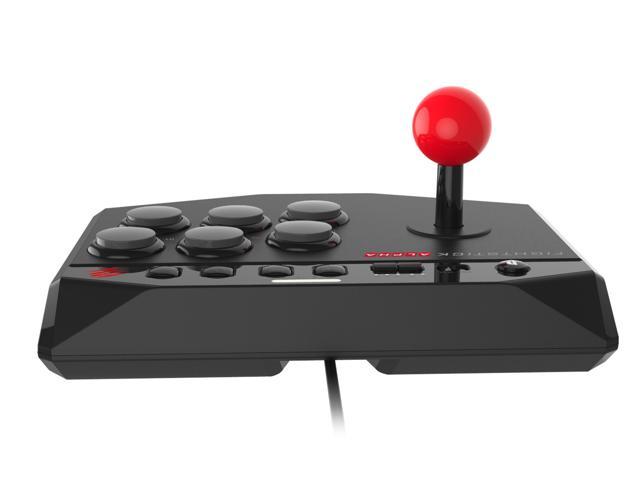 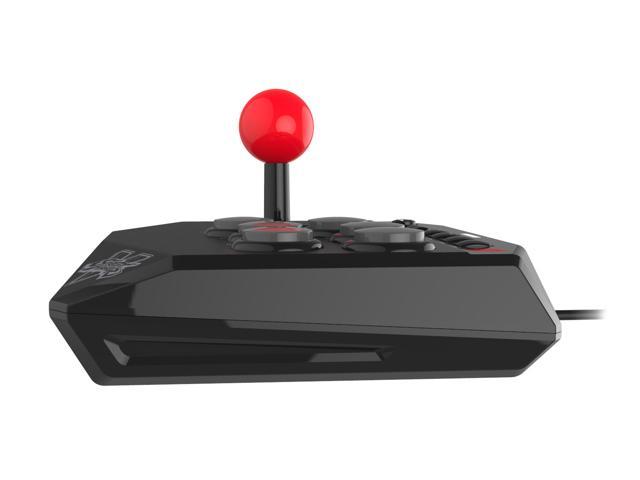 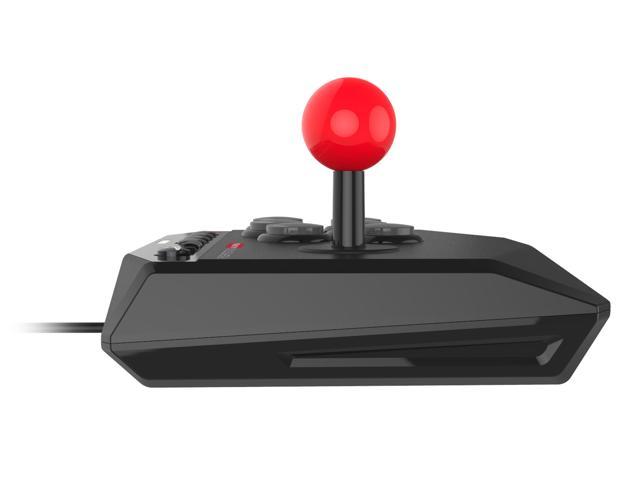 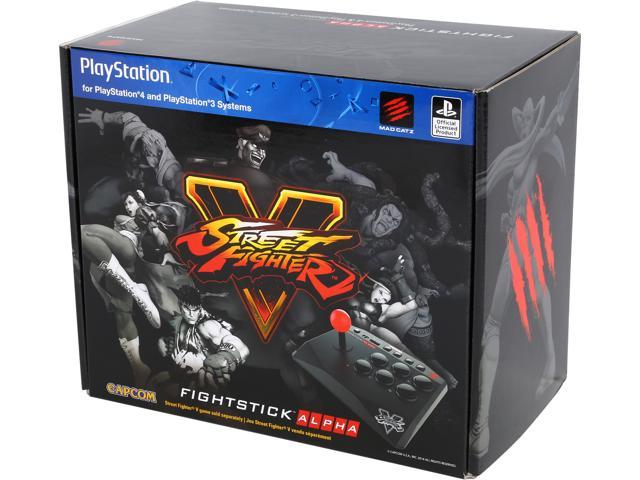 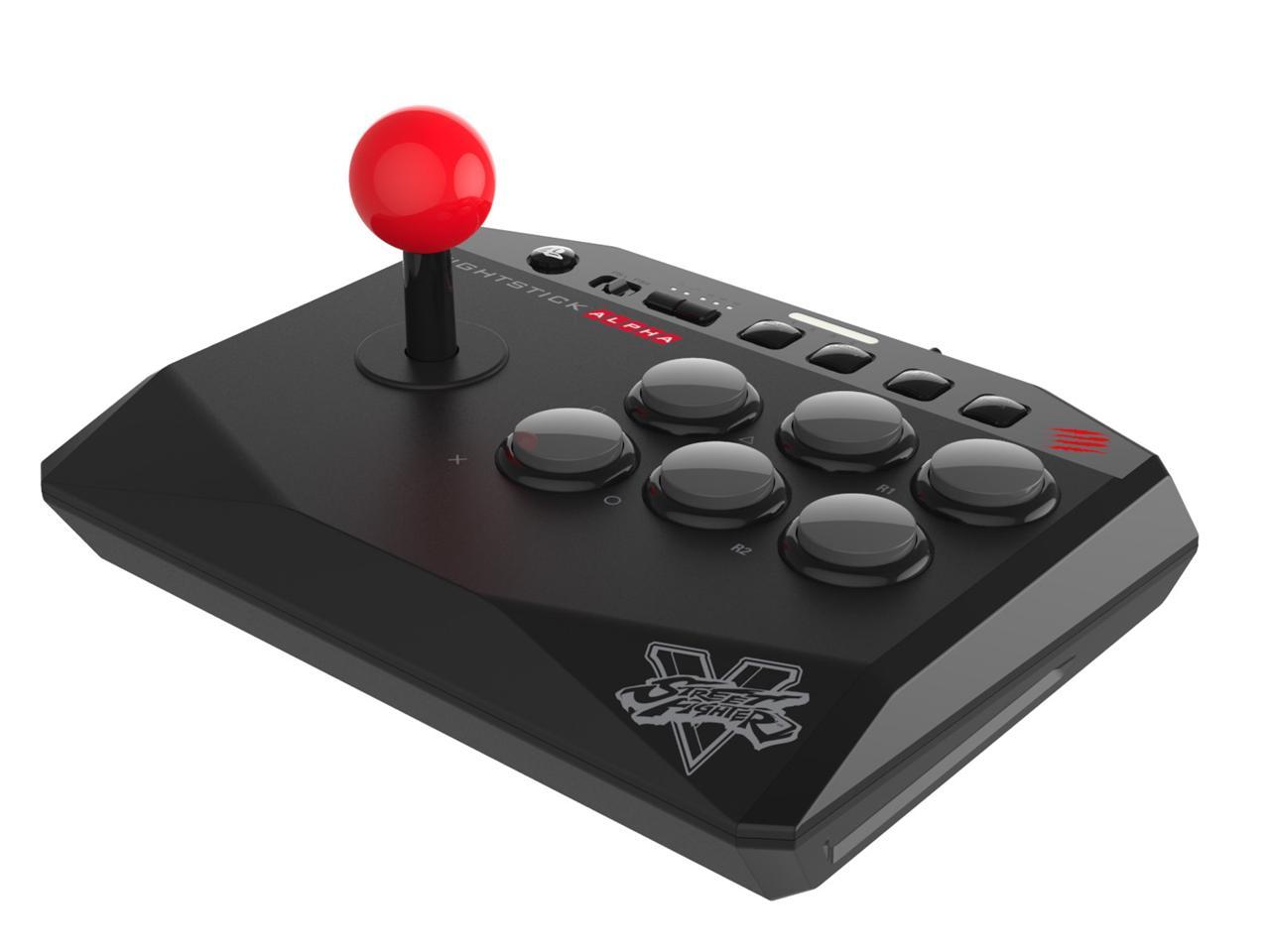 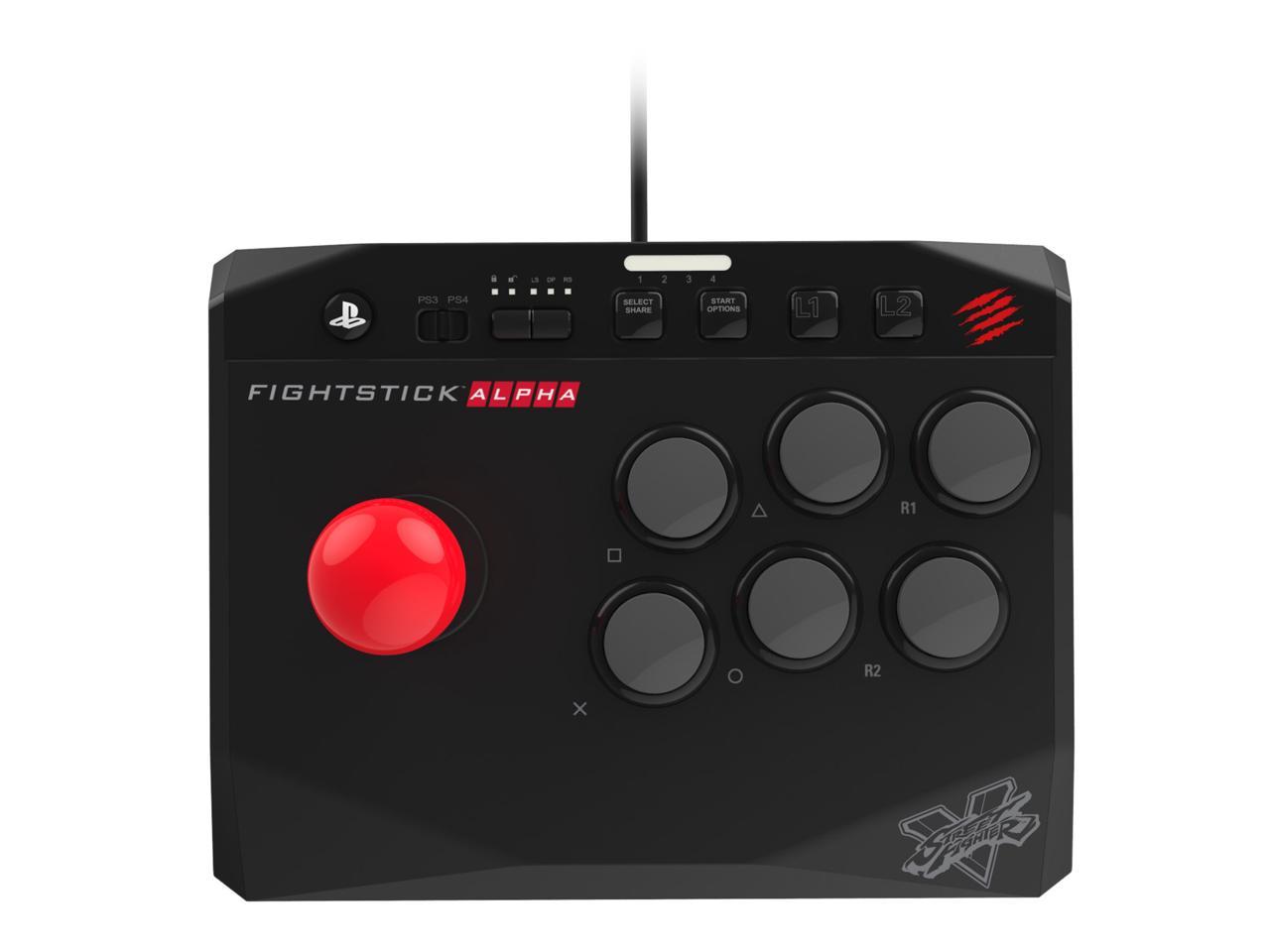 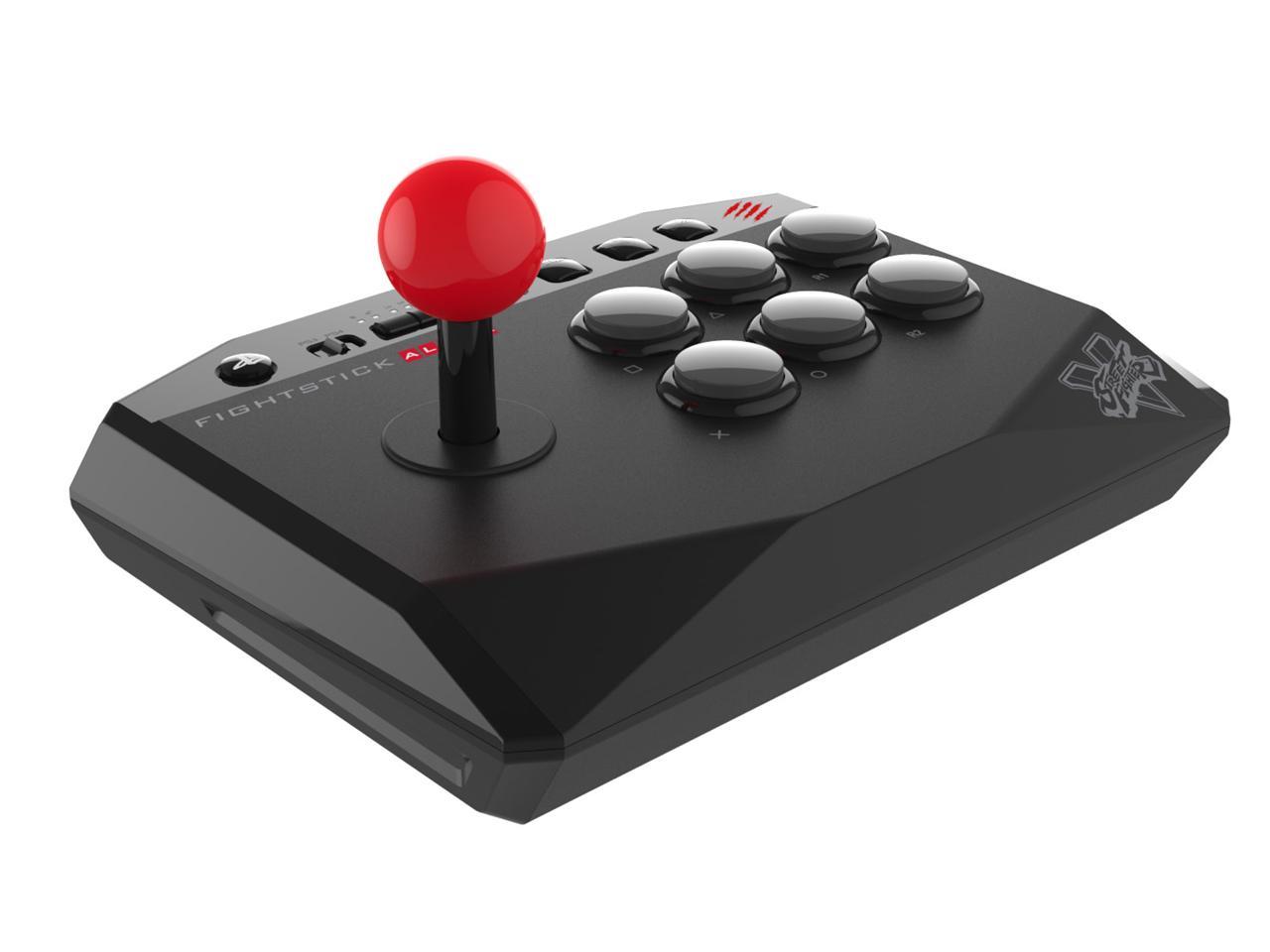 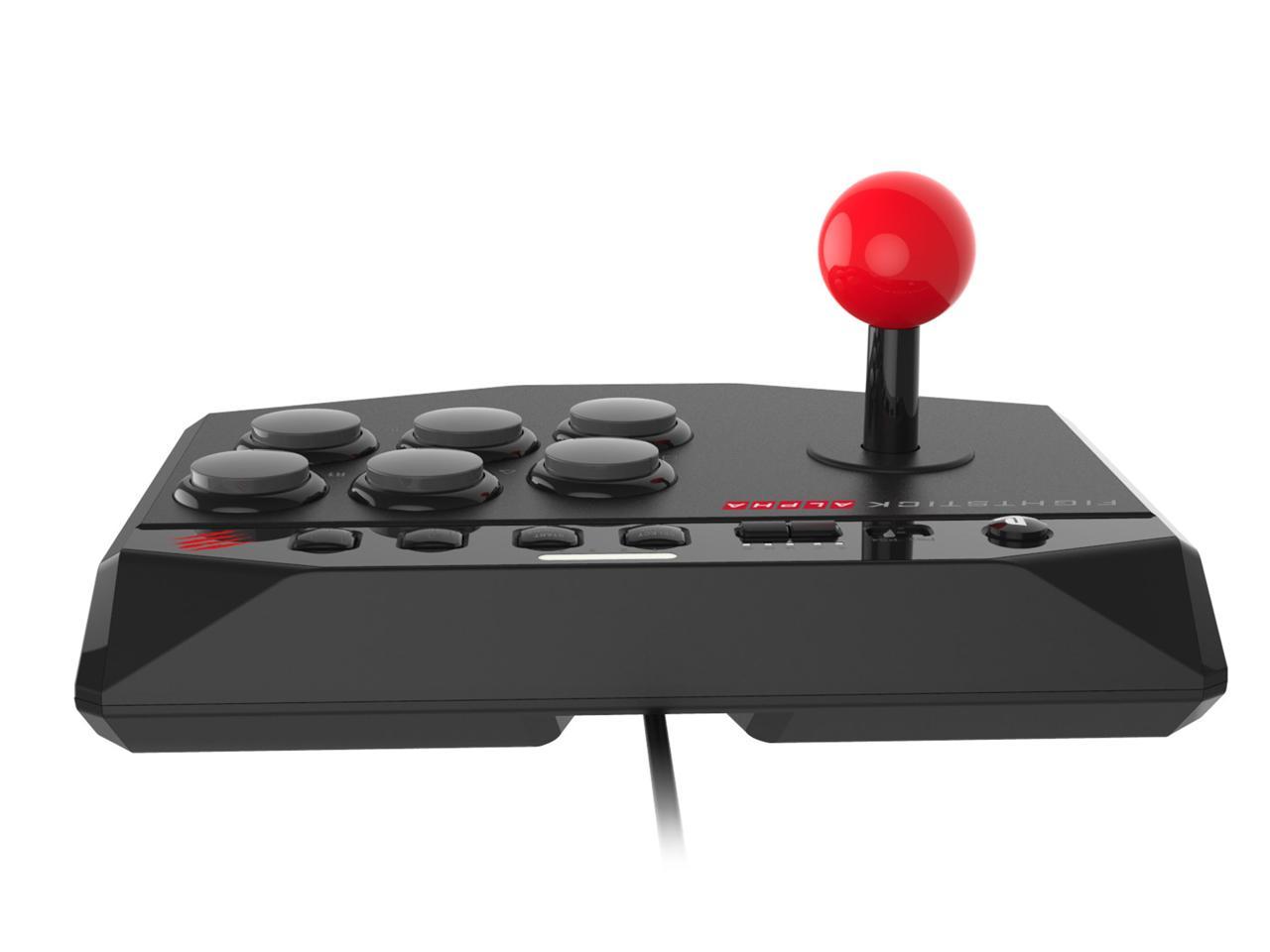 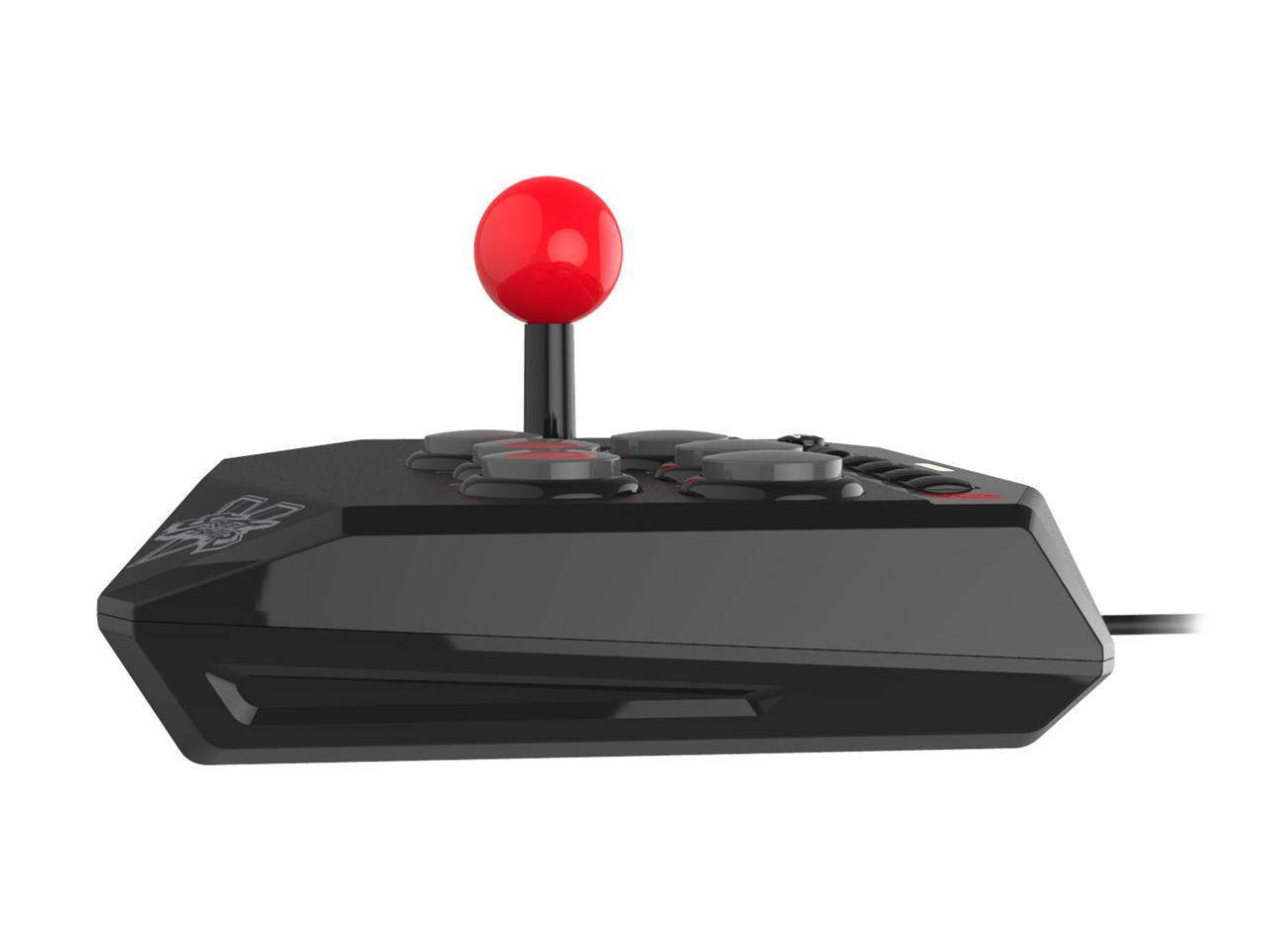 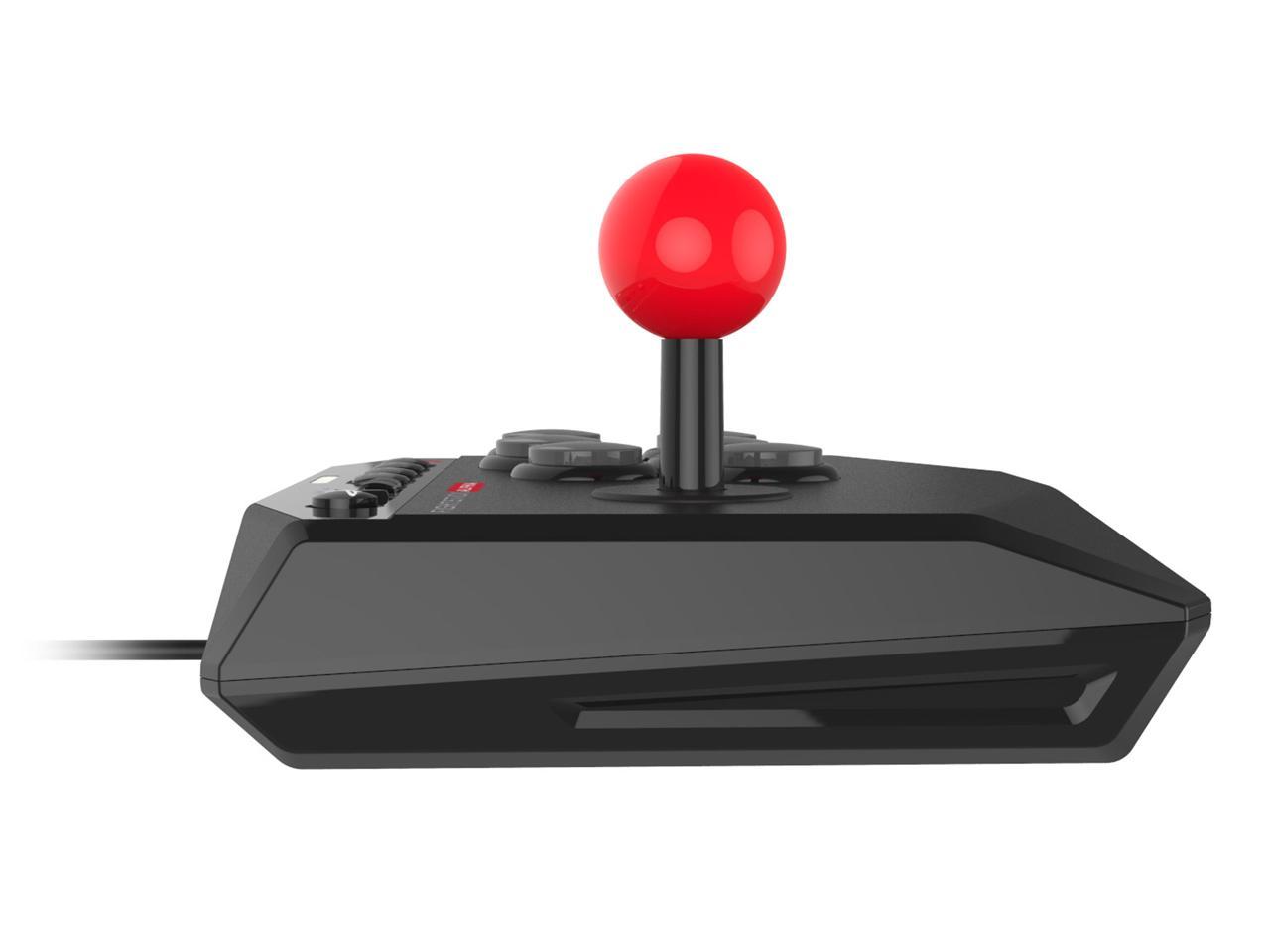 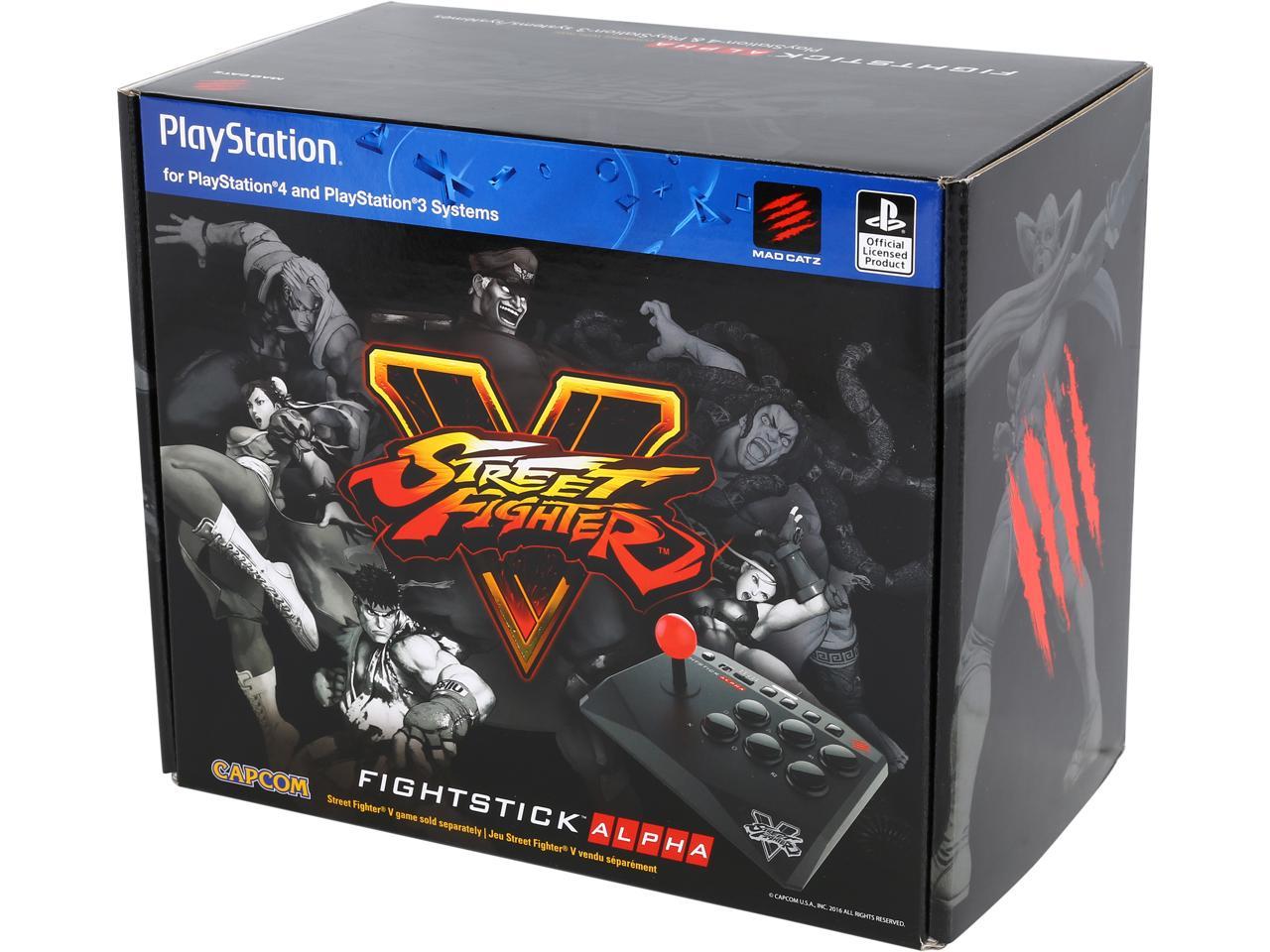 Dominate your every round with the Mad Catz SFV Arcade FightStick Alpha. This official arcade stick comes with a the control and precision you would expect from Mad Catz, in a compact, space-saving footprint that's streamlined and portable. You'll quickly experience the major difference from a traditional controller, courtesy of the ball-top lever and six buttons layout with reasonable spacing between buttons that give you more combat edge. This model works with both PS3 and PS4, and features a dedicated button that disables Start/Options and Select/Share for uninterrupted play. Moreover, this arcade stick supports many other types of games, with the lever able to operate as Left or Right Analog Stick or D-Pad, thus you can enjoy your favorites titles in more arcade style. Arcade FightStick Alpha delivers everything you need in a fighting game controller, and nothing you don’t. You get a ball-top lever and a six-button layout that matches the spacing of Japanese arcade cabinets. Although we mimicked arcade layouts, this Mad Catz FightStick still accommodates all games for PS4 and PS3. The remaining two action buttons are out of the way for fighters, but still within easy reach for other titles. A dedicated button disables Start/Options and Select/Share, and prevents use of the PS button. Alpha sidesteps worries of hitting the wrong button in the heat of battle. The best fighters in the world gain peace of mind by insisting upon an arcade stick with a wired connection. Alpha’s lengthy 9.8ft (3m) USB cable not only provides a reliable, low-latency link to your console, it maintains a comfortable gaming zone between you and the TV. The Arcade FightStick Alpha is equally great for games that don’t involve life bars or intricate combos. A 3-way button enables the joystick to function as the left or right analog stick or D-Pad, opening gameplay for a wide variety of game genres.

Compatible with ALL Major Fighting Games

Whether it’s an old favorite or an upcoming title that you’re patiently waiting for, the TE2+ is ready to fight.

Cons: -small wire compartment storage -buttons might come defective so you’ll have to return for a replacement -not the best to mod due to small internal casing -kind of tricky to find PC drivers (make sure it’s on PS3 mode when using on PC)

Overall Review: -If you’re willing to risk buying a potential faulty product then by all means this is a great fightstick. -personally I would prefer the Hori Kai Hayabusa simply because of the Hayabusa buttons over the Sanwa.

Pros: I can't really list anything here as neither of the models I received were functional

Cons: Neither of the models I received functioned. Don't think any more need be said.

Overall Review: Bought my first stick of this model on 8-5-2018. Arrived well packaged but the L2 button didn't work. Sent it back for a return. Second one arrived and the PS Home button didn't work. Very disappointing to unbox 2 arcade sticks that don't work.

Cons: Only negative is that I had to replace the square restrictor gate for an octagonal one. This really wasn’t a problem because I knew about it ahead of time and it’s less than $5 to get your desired gate. Very easy installation.

Overall Review: I would highly recommend this stick to anyone interested. Works great on both pc and ps4. I have also read that people have had trouble figuring finding the drivers but I plugged it in and it downloaded the drivers all by itself and worked no problem. If ur considering an arcade stick you can’t go wrong with this one. :)

Pros: For all the grief MadCatz has gotten over the years for their sub-par third party controller products, I really can't complain about this stick. I had a MadCatz stick for my PS3, it wasn't the tournament edition but it was super easy to drop in a Sanwa stick and buttons as a mod. The case still had that lower-end feel to it though. This Tournament Edition certainly does not have that problem! The stick is heavy and feels high quality all around. I've not had much playtime with it yet, but with newer fighters having haphazard support for legacy sticks or dropping legacy support altogether I figured it was time to pull the trigger on a new one. This stick has a great feel so far and even though I'm far from a pro player I definitely feel like one with this in my lap (until I go online...)

Cons: Maybe I'm just a bit slow on the uptake but I had trouble plugging the cable into the back of the unit. The manual says it only fits one way (which is true) but it was a bit difficult to see the indentation on the cable and match it up with the back of the unit. A very minor gripe but it had me scratching my head for a minute!

Overall Review: The cover art is customizeable and it includes instructions for how to remove the art and place your own in there. I may look into doing that. I like Ryu and all but this stick would look great with some great Akuma art instead! Just not sure whether the replacement art is something you buy or if you have to get ahold of somebody with a very high quality printer to hook you up.

Pros: beautiful looks, excellent parts, smooth feel, super responsive, since i have played many of fighting games and have entered in multiple tournaments i have chewed through multiple arcade fight sticks. i have witnessed the good most notable the MAZZ stick from many years ago and even have built my own using the Akishop ps360+. they have all dulled in comparison to this fine piece of machinery the sanwa jlf series of joysticks and the Sanwa OBSF buttons give you a smooth feel with a very quiet but intimidating sound and a response time that leave little if anything to be desired..i recommend this product to anyone wanting to ditch the controller and trade to move into a device that will most assuredly increase your game by ten fold.

Cons: i have a personal upgrade preference that i wish that could have been offered pre-purchase the square restriction plate is the plat that controls the motion on the joystick that gives you a square base of movement this can some times lead to crouching guard and random unintentional back jumping this can be fixed for those who do not like this feature at a low cost of the toll that is provided with the controller and a octagon Sanwa made restriction plate for nine dollars after the purchase. still is one of the best sticks i have ever used and plan to use in new upcoming events

Overall Review: i love this controller it really brings the arcade to your home as you boast both at price and quality. this stick promises to bring out the true potential in every fighting game fan out there. see you online

Pros: The joy stick feels great. I feel like the motions are easier on this stick then the one I had before. It's very easy to mod. Which is great because I love making my sticks custom and the easy access to the inside of the stick is a great feature. The inclusion of the L3 and R3 buttons is a great feature. As well as the ps4 touch pad. The newegg customer service is great. My stick was defective and they where able to setup a replacement for me.

Cons: There is a common defect with this stick where the buttons don't function properly. The stick I got originally was defective and so I had to go through a replacement process which in all took a month for me to receive my stick.

Pros: The buttons and everything else worked fine its just the stick kept inputting right. its a common issue for the stick to input a random direction.

Cons: the stick came in broken.

Overall Review: if it works its good but it was broken so its not worth the money

Pros: -Sanwa joystick and buttons, all the PS4 buttons available with touchpad -Good weight without feeling too heavy -Padding on the underside of the stick

Cons: -Cable isn't detachable as far as I can tell, cable door cover is flimsy

Overall Review: For how insanely cheap this stick seems to get on sale frequently, I had to wonder what is wrong with this stick? It's using the same high quality parts as Qanba Obsidian and Razer Panthera, and it just feels great. Everything seems to be fine with my unit after regular use for the last two weeks. Don't sleep on this one!