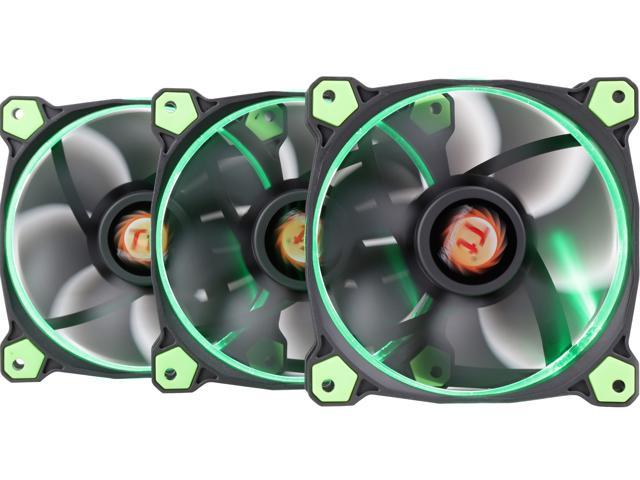 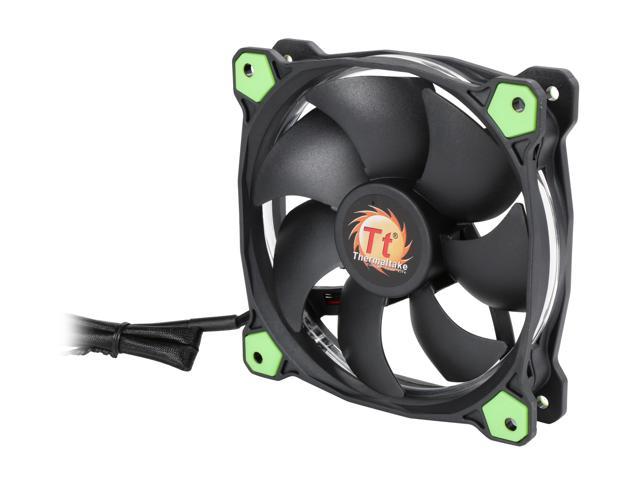 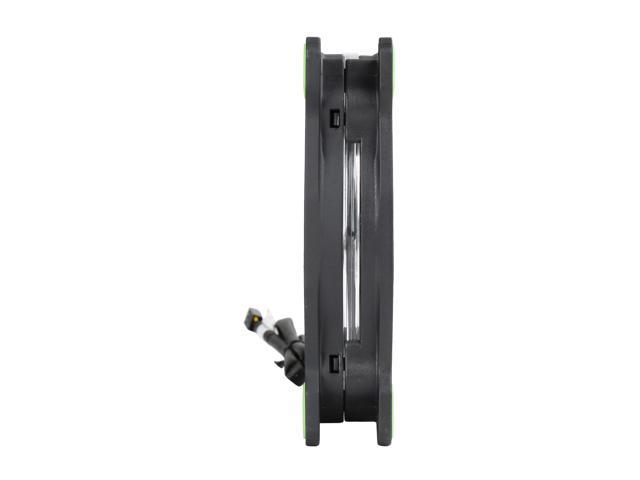 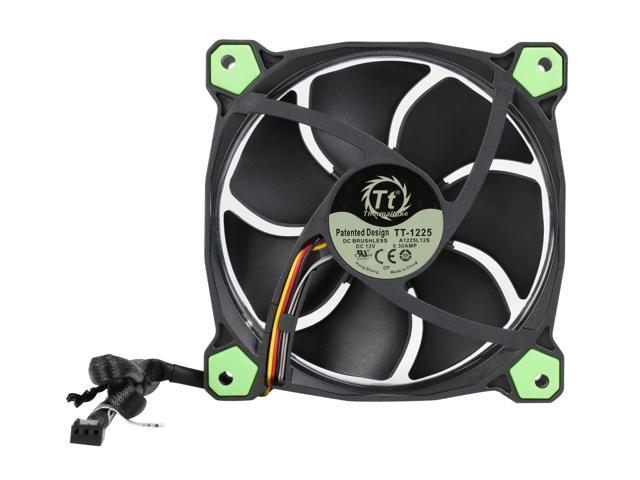 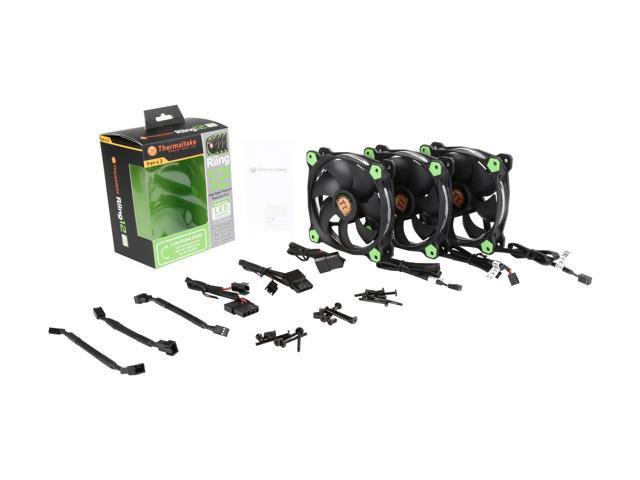 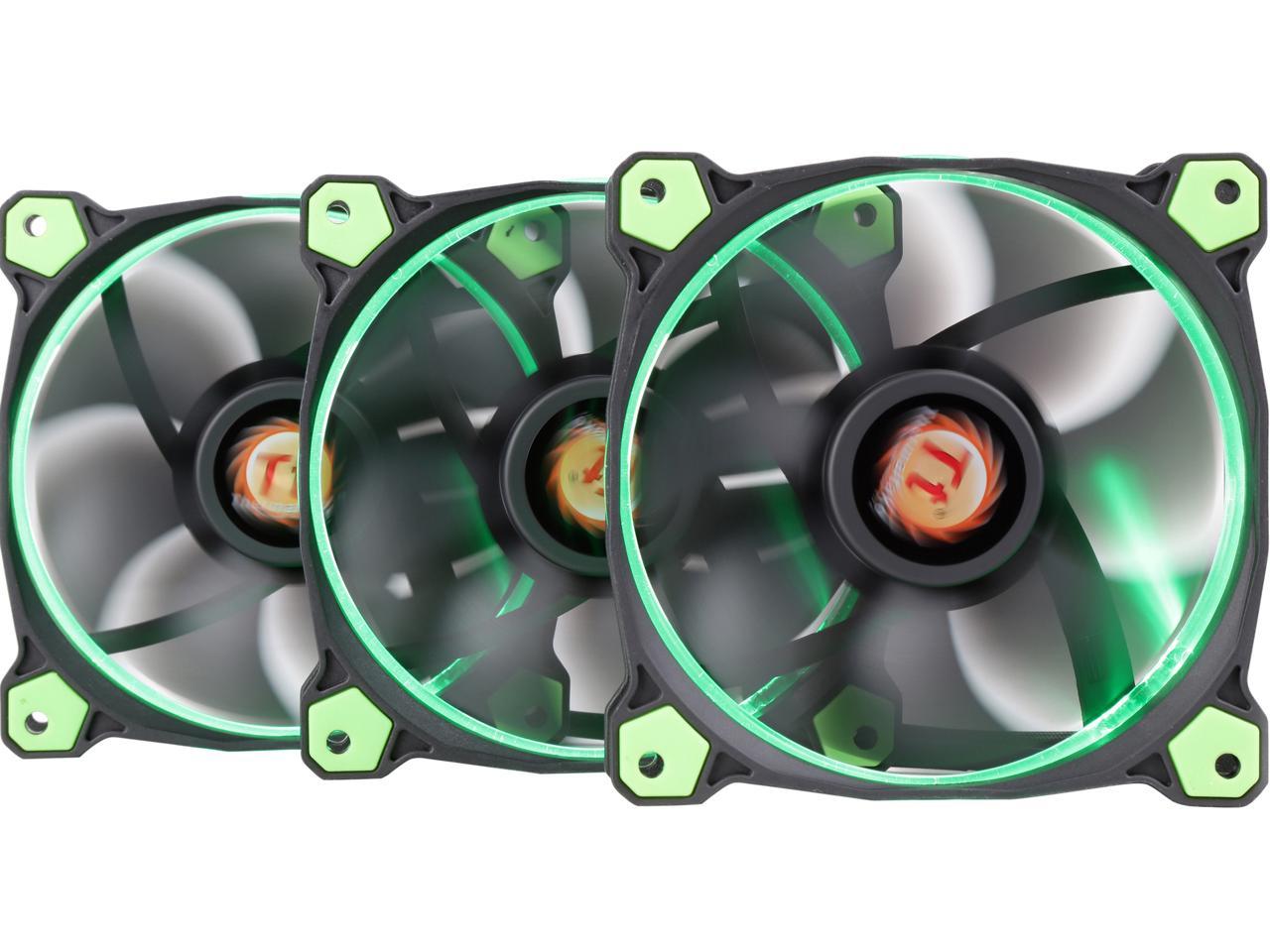 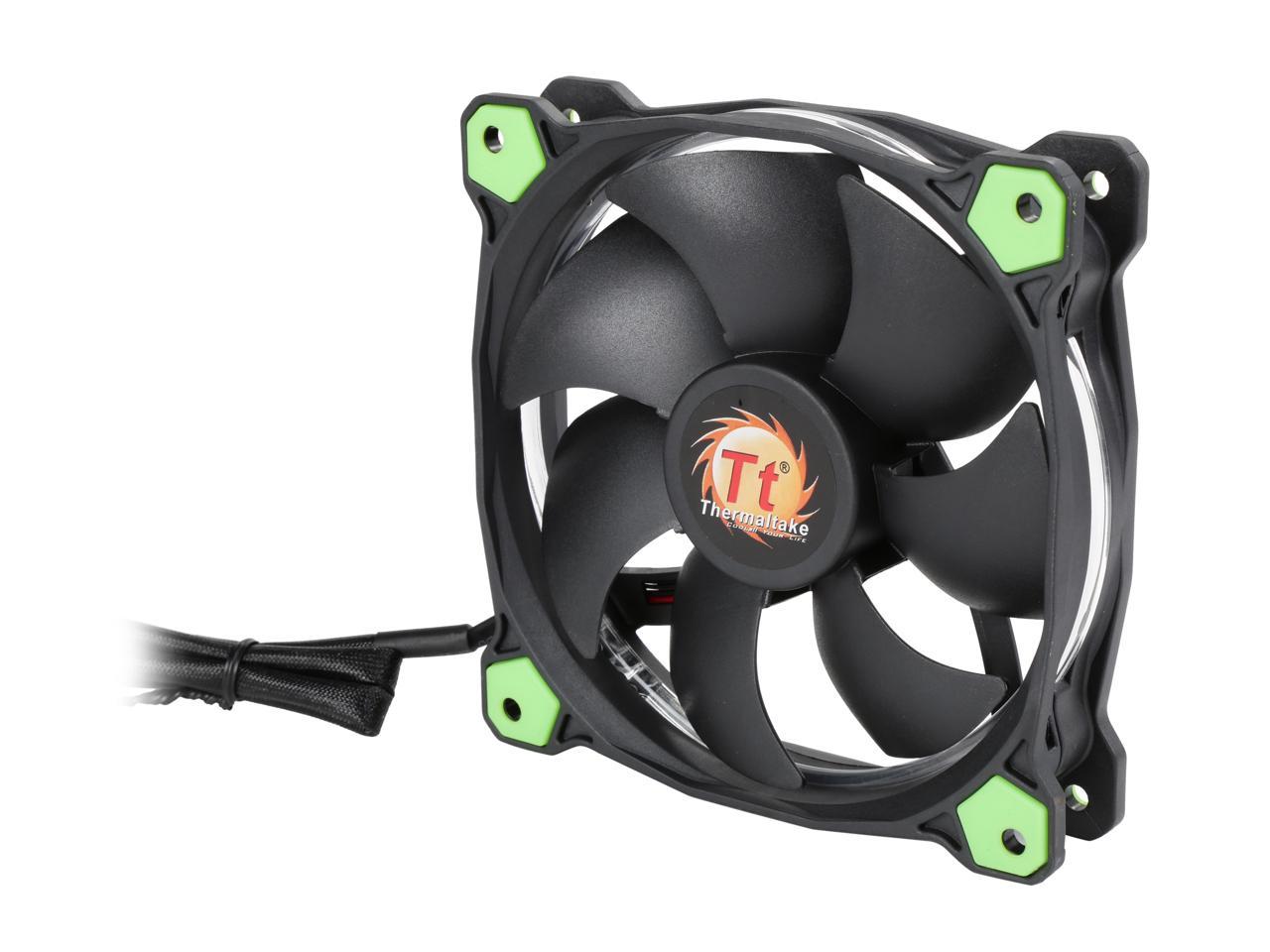 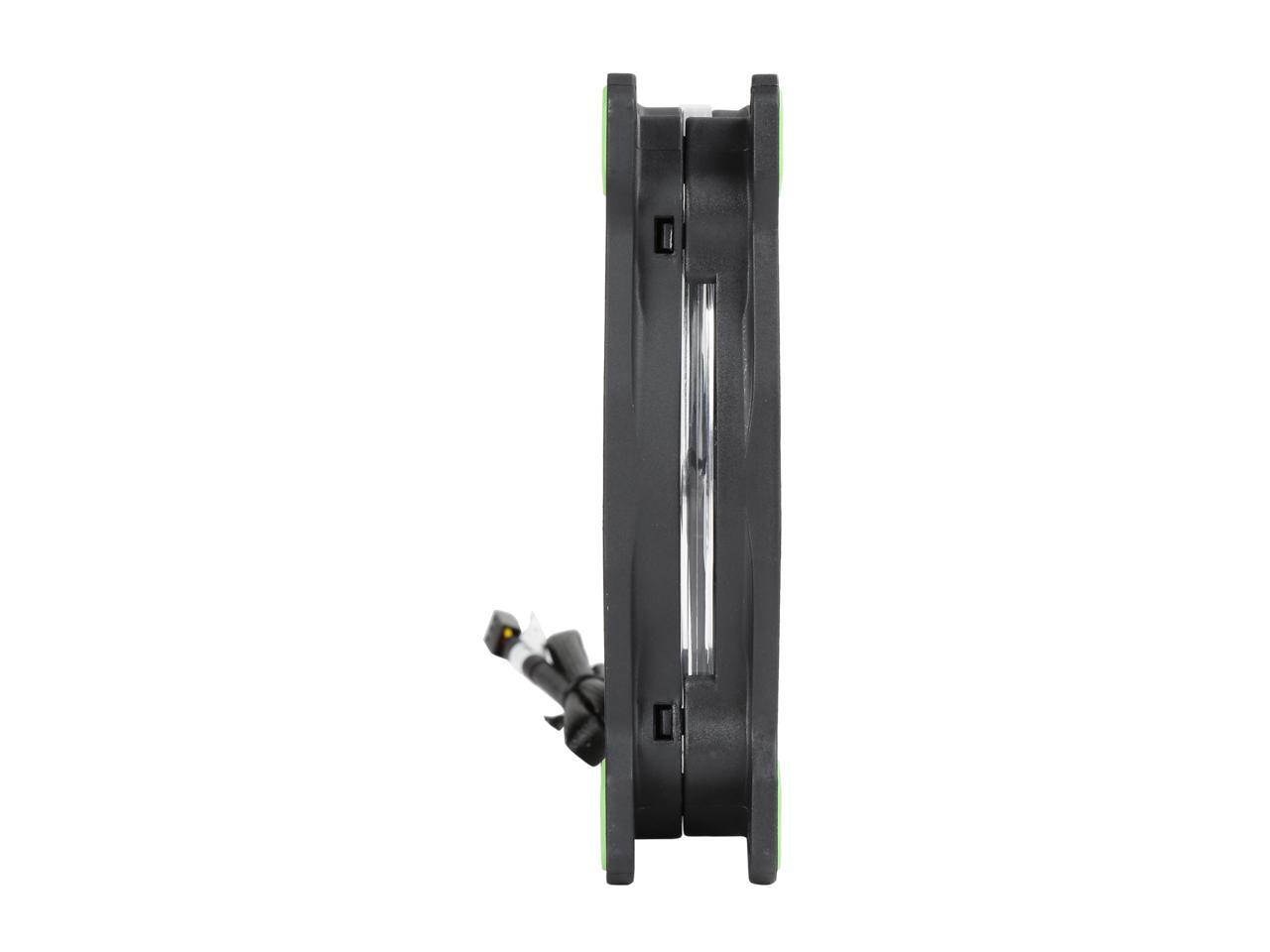 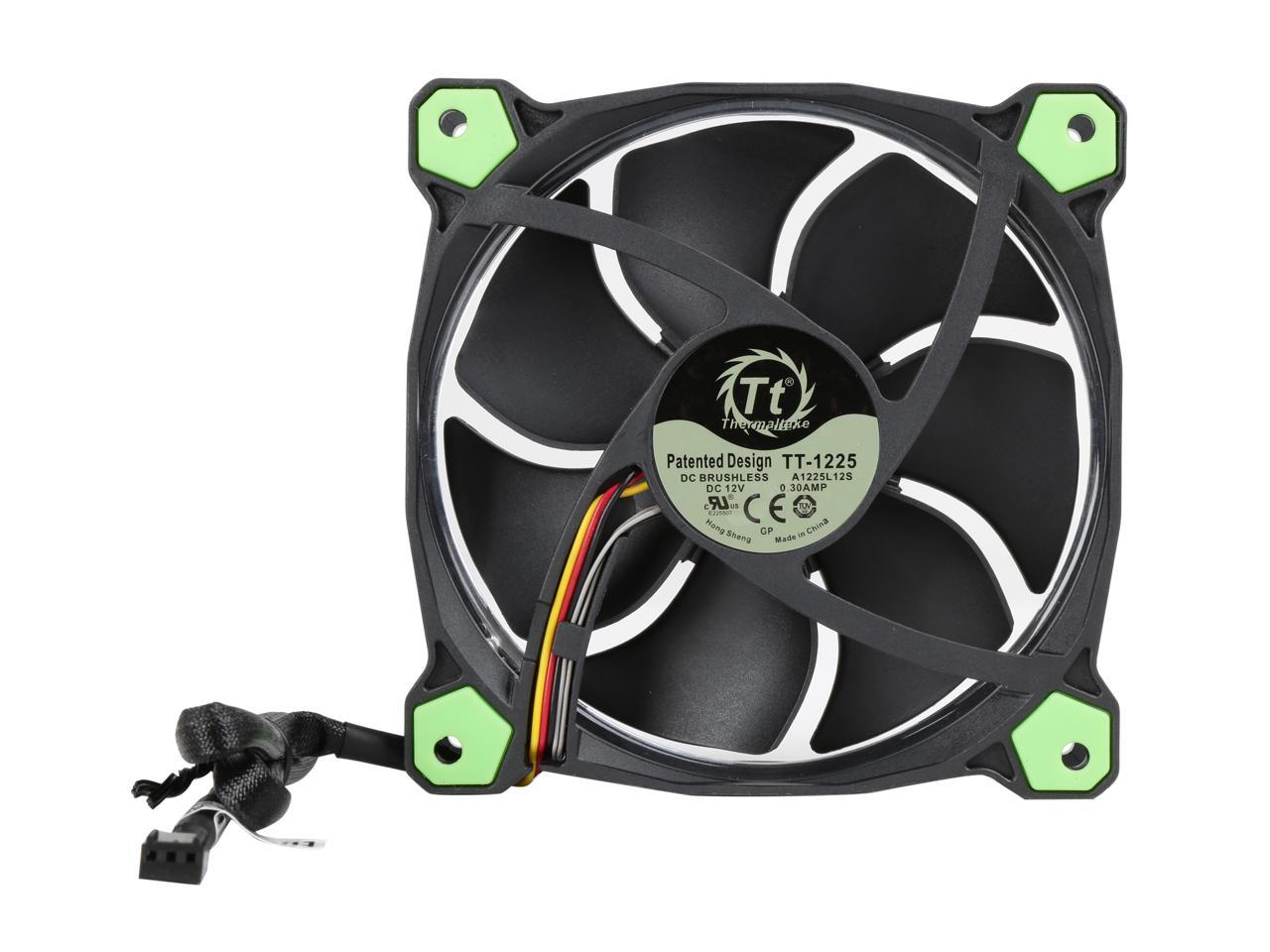 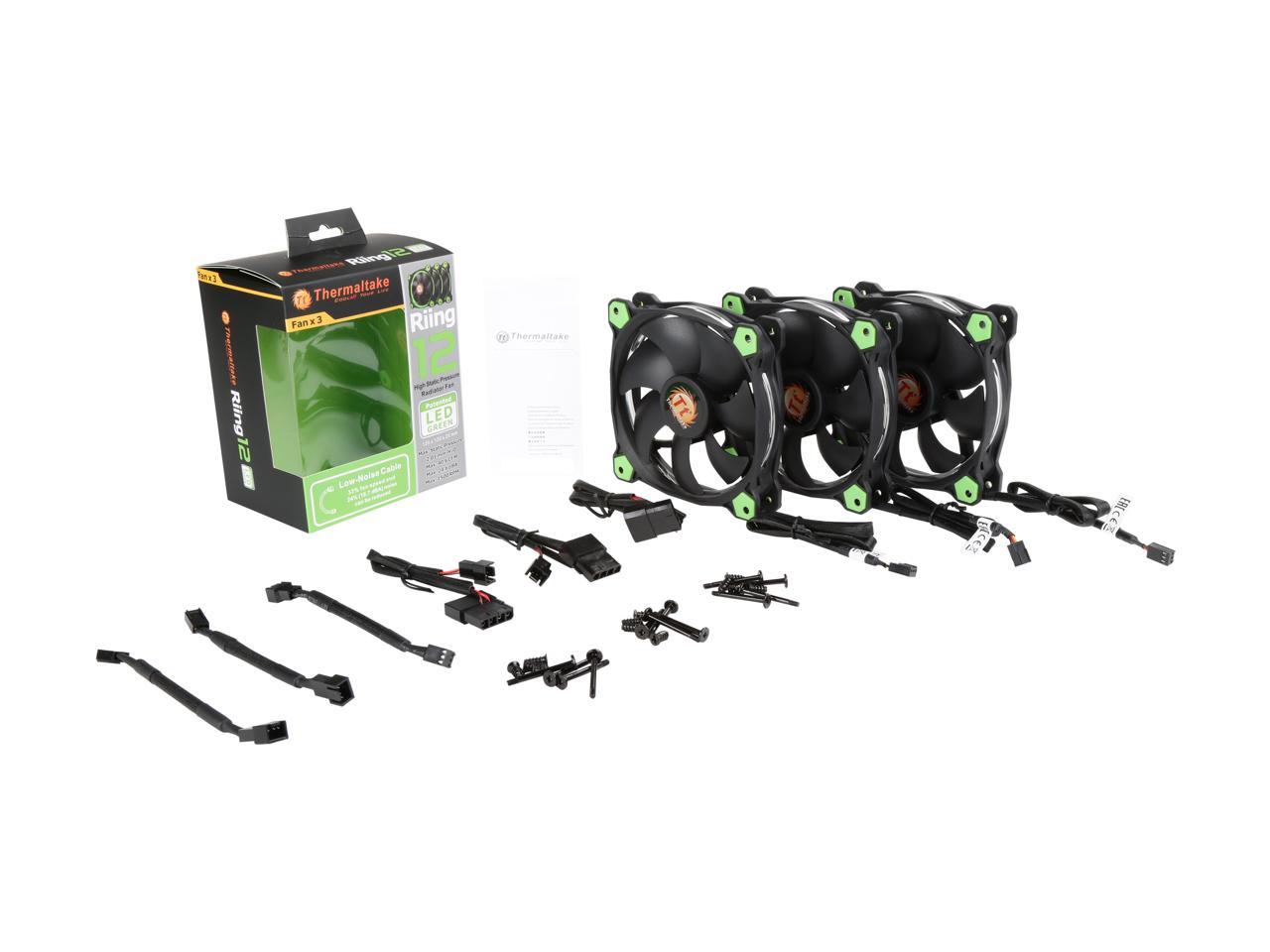 Learn more about the Thermaltake CL-F055-PL12GR-A

Pros: Wow! they look so good in a black case! They move plenty of air to make my case as positive in pressure as it can be.

Cons: They do make noise if installed horizontally, but the way they look takes the cake. I am very happy with these.

Pros: Seems well made; solid, sturdy. The sound at full RPM is a pleasant rush of air, not at all harsh.

Cons: Considering that this model boasts "high static pressure", I wish that the fans fit snugly together instead of having those decorative cut-outs along the flat sides. The whole point of HSP is to push air through something that is difficult to push through (like radiator fins). Air will take the path of least resistance and gaps are not helpful. Though the gaps aren't huge, they are more pronounced in multi-fan arrays. It's not a big deal, but I look at such things from a functional design standpoint and wonder why. The illuminated ring (riing) is intriguing, but it looks better on film than in person. The LEDs only exist in one corner. The light propagates around the ring similar to fiber optics. The LEDs are bright enough to shine through the plastic and onto the fan blades in that one corner, but only in that corner. It tweaks my OCD. I chose to re-orient the fans in my system, 1.) so that the bright LEDs were pointing away from my desk (and my eyes) and 2.) to place the LEDs of each fan to the same corner so that they were esthetically balanced. You can't mirror-image them because the light reflecting on the blades follows the curve of the blade, therefore giving the appearance of angling away from the LED source rather than straight across the fan toward the motor. I don't have a better description for this, but it just looked wrong when I tried. I wish the fans had an LED in each corner instead of just one.

Overall Review: There aren't many other choices for HSP at 140mm. As fans go, this is a fan. I don't mind that it's a 3pin.

Pros: Great look with the LEDS and the LED ring.Not too loud , just right.Comes with a low noise adapter , which is nice to bring down the speeds a little.Great for windowed cases because of the LEDS on the Fan AND LED ring.Thermaltake has a winner here.

Overall Review: Newegg, thanks again for a great new product.

Pros: These fans move quite a bit of air through my 240mm radiator without making much noise. Vibration-dampening rubber is pre-mounted on all corners. The LED lighting is enough to light up the inside of my build without making it visible from space like a lot of other LED fans.

Cons: The included long screws for radiator mounts are way too short. They barely clear the other side of the fan. I had to buy different screws.

Overall Review: If only these were PWM-capable, but that's just me being nitpicky. I really like the aesthetic design of these fans and will probably buy more later on.

Pros: -Came with all the screws -Came with a molex adapters which was great as I ran out of fan headers on my Mobo -Lights are gorgeous and soft so they're not distracting.

Cons: -These fans are designed for pulling through filters and radiators, don't expect silence. Noise is not an issue for me, but, I felt I should mention it in case its an issue for someone. -Making me order 4 more just because I love them so much and I want more lights in my case.

Pros: - Not very loud even when run at full speed (I've come across much louder fans than this). - LED is good brightness; not too bright or too dim for my case lighting scheme. - Seems to move a decent amount of air.

Overall Review: Am using it as the CPU fan on my trusty old Thermaltake Big Typhoon for my new Ryzen 7 rig, and it seems to be up to the task. I'm sure the rubber mounting grommets on the fan are responsible for alot of the sound cancellation through vibration dampening.

Pros: I wanting to light up my case without being too much, which is how most LED fans are as the entire fan blade is typically illuminated and to me that just looks tacky and overdone. Insert these fans and they are absolutely perfect, the LED is bright enough that its clean and vibrant but it isnt too much. Absolutely beautiful fans for a stealthier look. I didnt want to shine up my whole case but wanted accent coloring and these are exactly that. I have 1 connected to my 120mm radiator and 3 on the front of my case. Wish my case had fan areas on top of case as id put them up there too (masterbox lite 5). The fans are virtually silent, even on full load which is very nice. They arent the greatest at pushing air but do enough to get things cool enough to function and not have to worry. The case I have also isnt the greatest with airflow so that may be contributing factor. These fans also came with a ton of cables and screws to be able to mount and install however you want. For the price you truly cannot beat these fans. Stay far away from fans that cost more than $25 a piece, youre paying for the brand and gimmicks more than functionality and durability. Corsair makes nice fans but they are NOWHERE near worth the money they charge. Get these, you wont regret it (also help stop the awful full fan lighting trend, its just bad looking).

Cons: Dont push as much air as one would hope for under full load.

Overall Review: I plan on buying these exclusively when it comes to fans now. Functional, beautiful, durable

2 out of 2 people found this review helpful. Did you?
Leslie H.
Ownership: 1 day to 1 week
Verified Owner
Awesome fan good static pressure and quiet but has two annoying flaws both minor though!7/28/2017 4:09:40 PM

Cons: -Not pwm (just a 3 pin fan for power connection) which is actually just a minor thing as I run my fans at 100% fan speed at all times anyways! -It is not really as yellow as it seems in the pictures and videos, more of a pale golden yellow egg-nog like color as others have mentioned and that is the reason I took an egg off as that is a little misleading if you are looking for true yellow like LED cooling fan you may want to look elsewhere -

Overall Review: -I would recommend this fan to anyone else as long as you keep in mind that it is not PWM (only 3 pin) and that it IS NOT TRUE YELLOW!!! -However this is still a great fan for static pressure purposes!