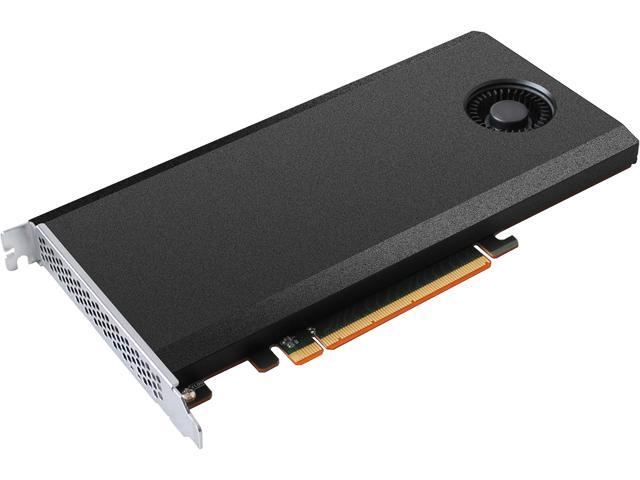 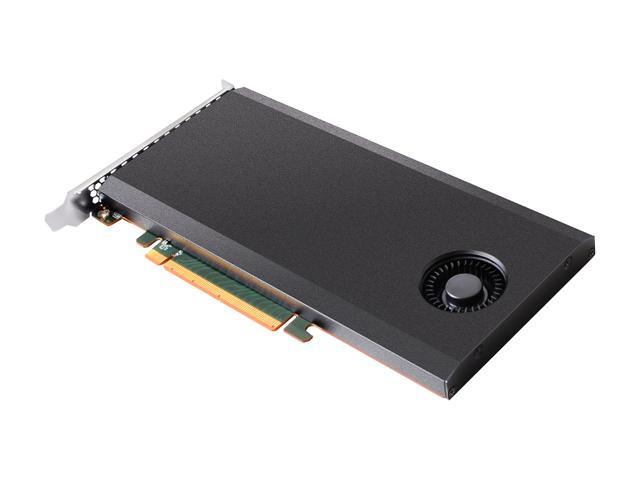 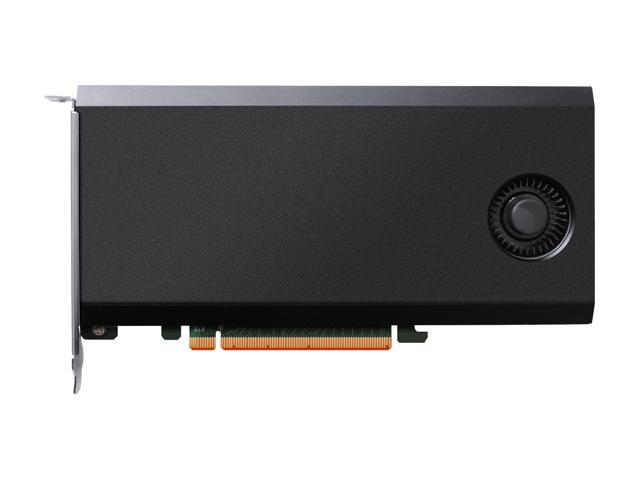 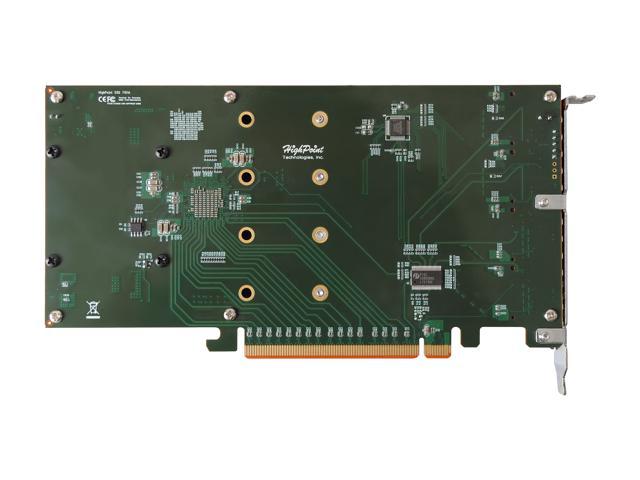 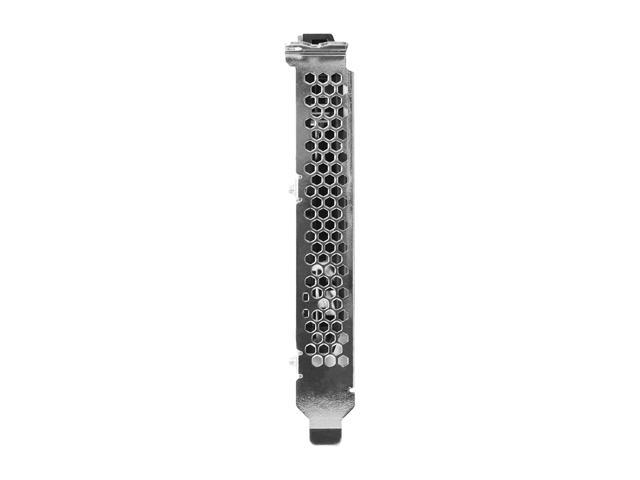 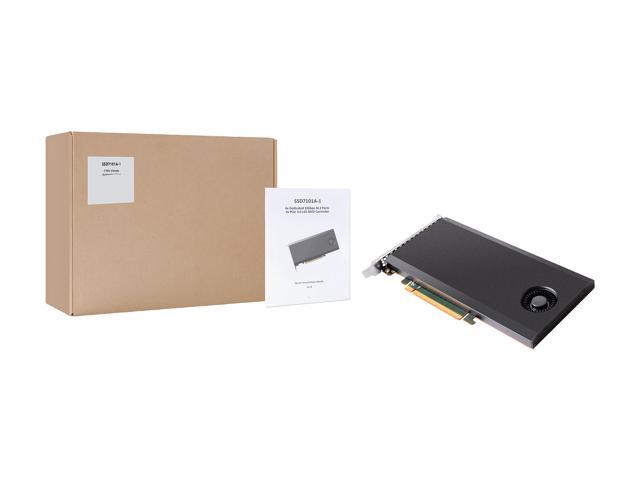 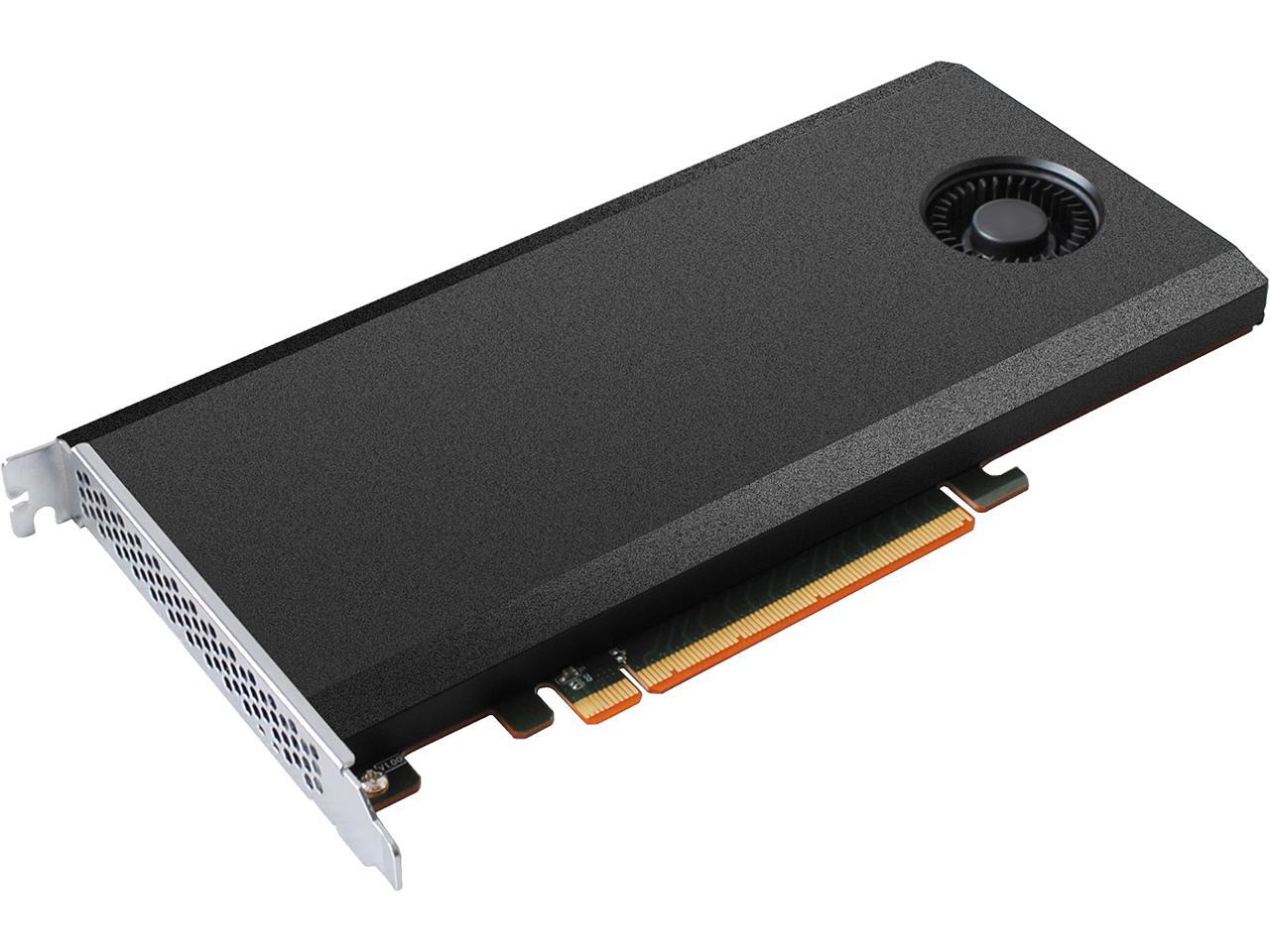 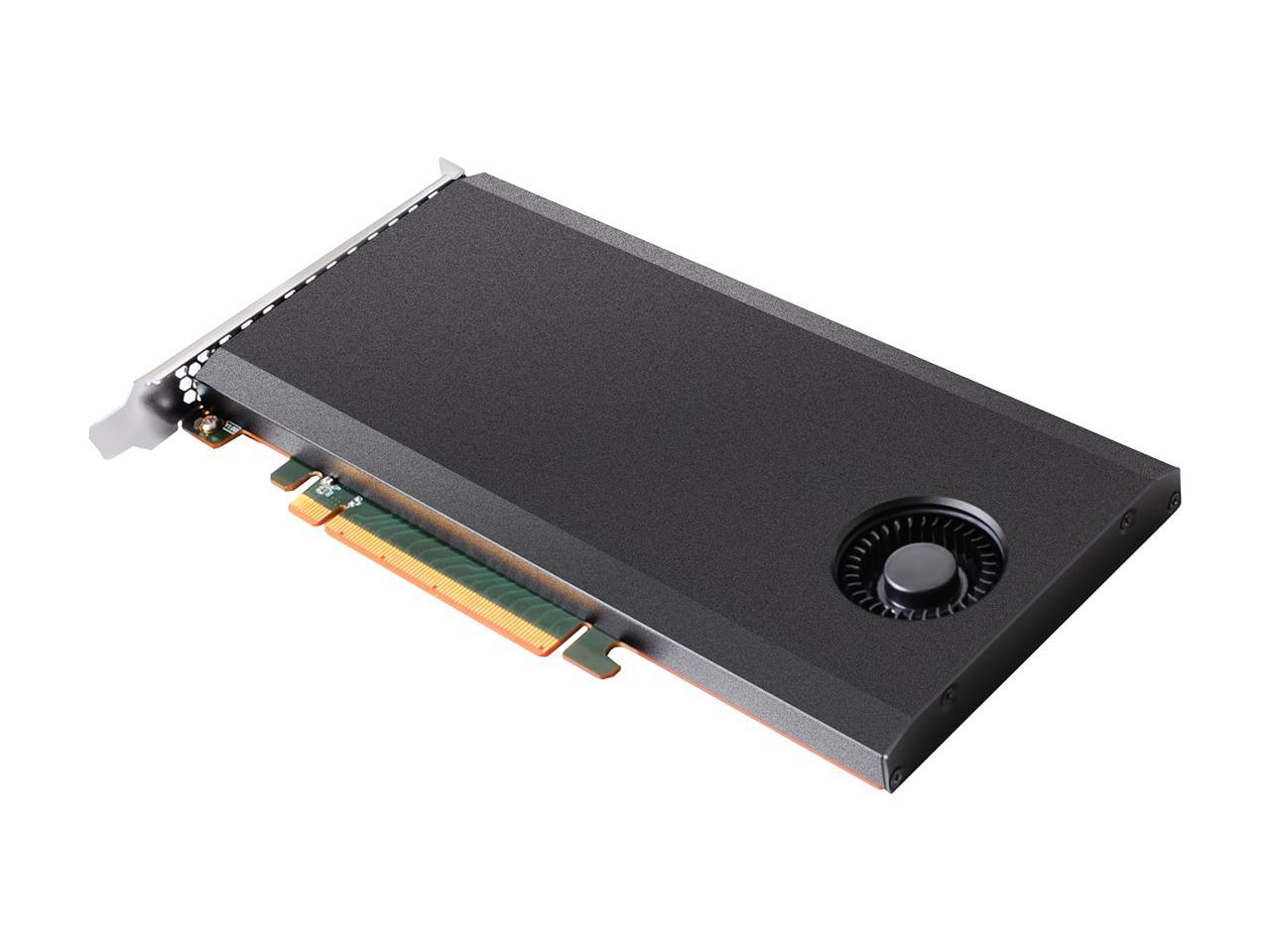 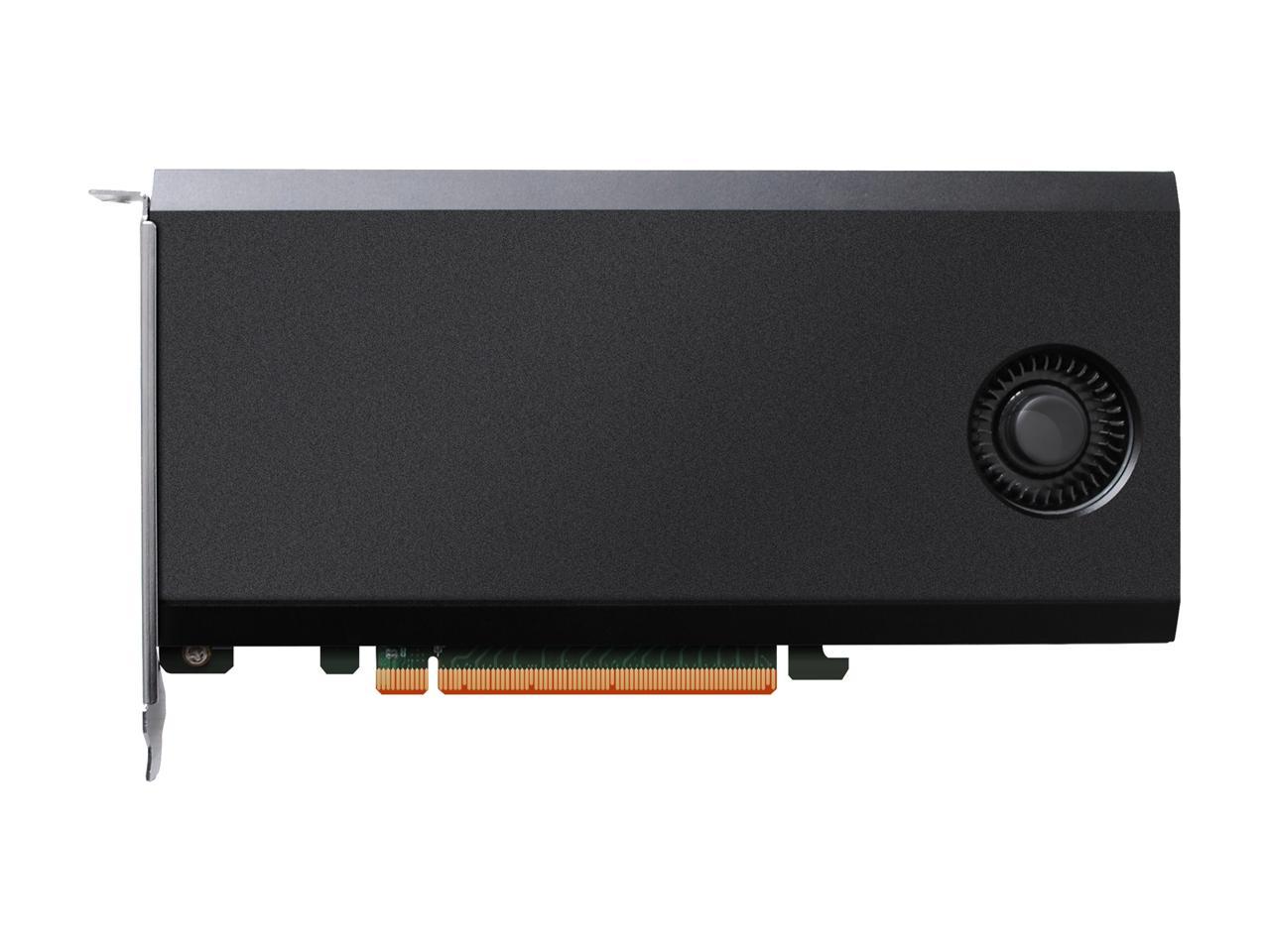 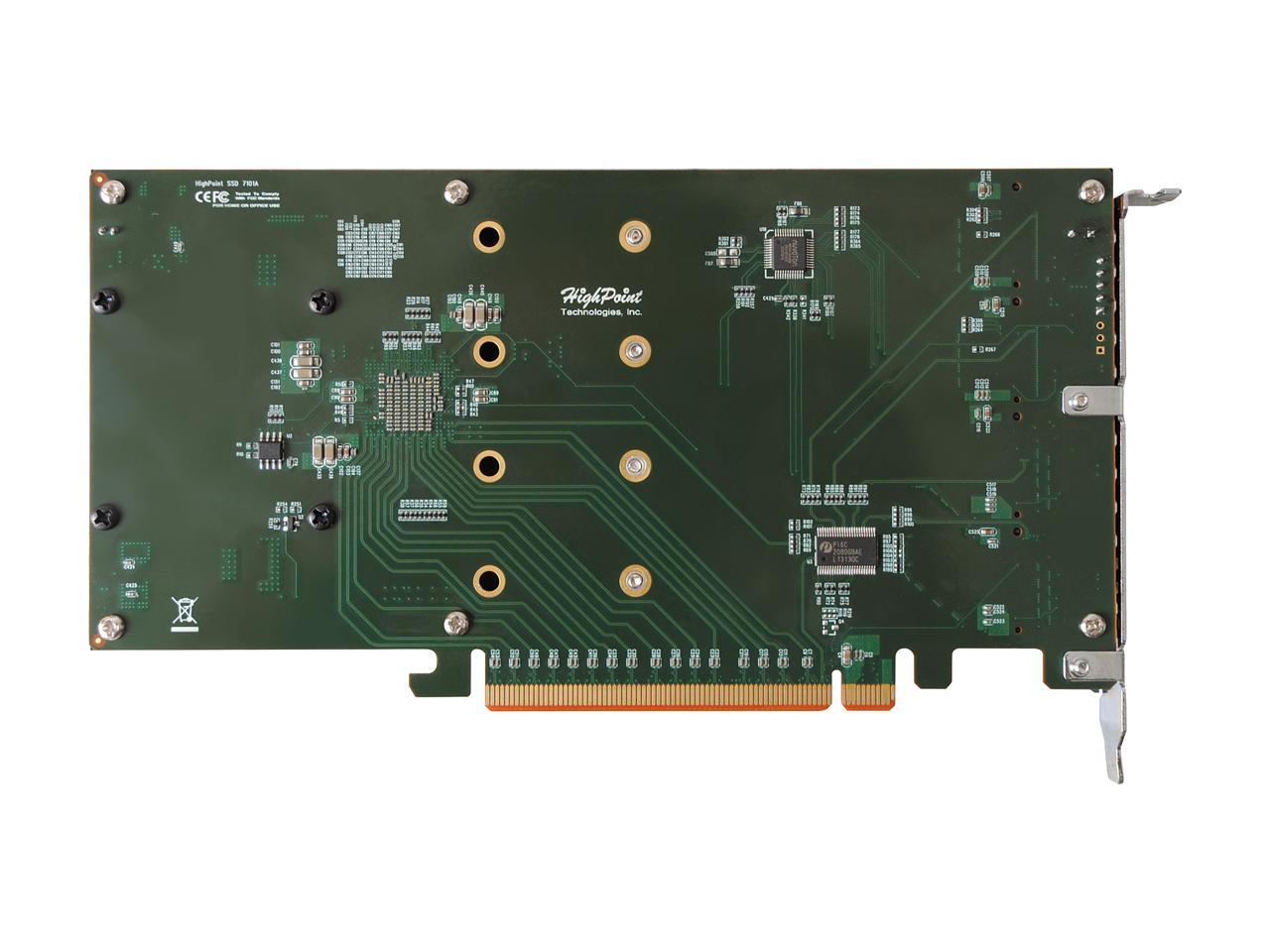 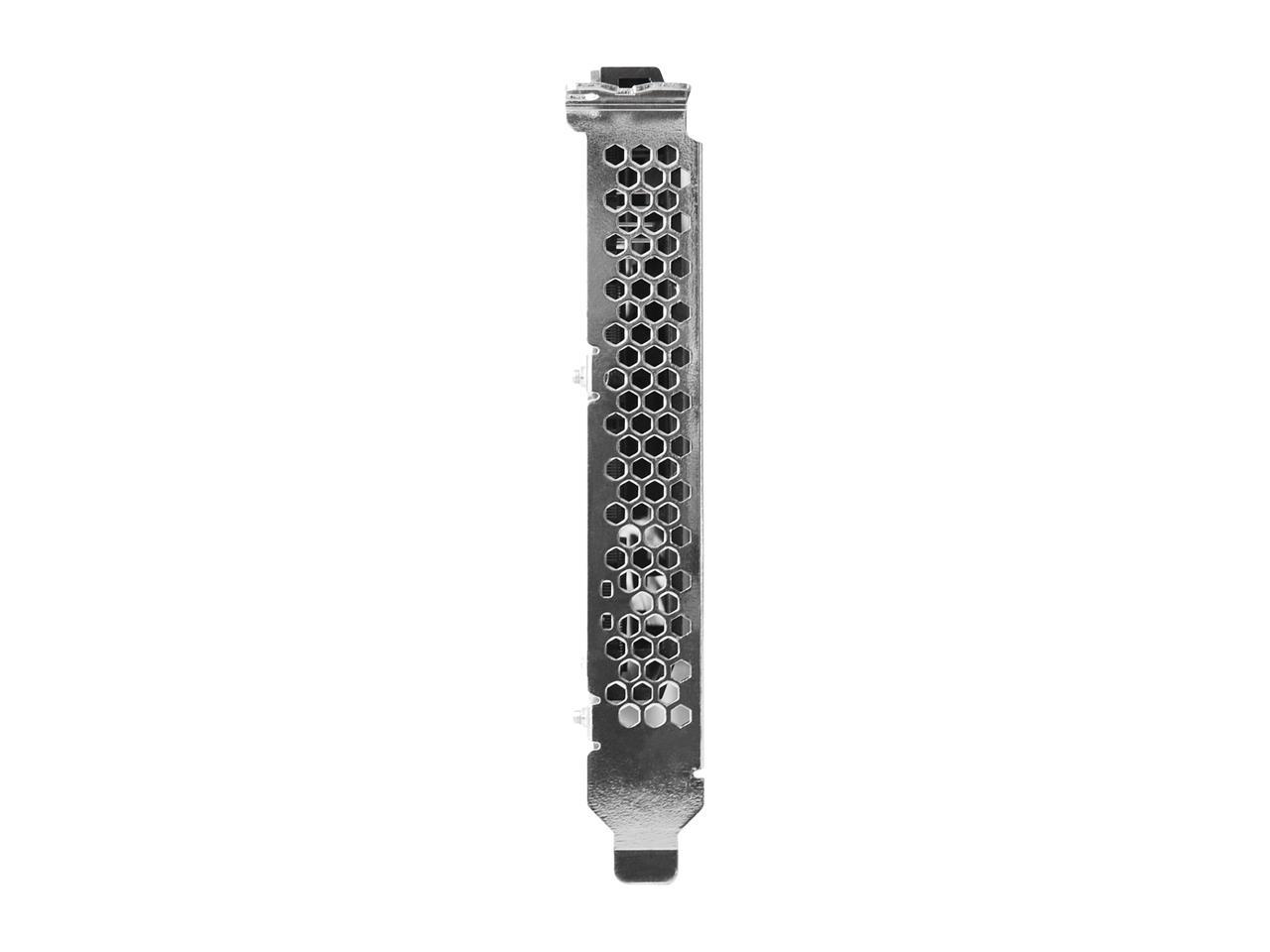 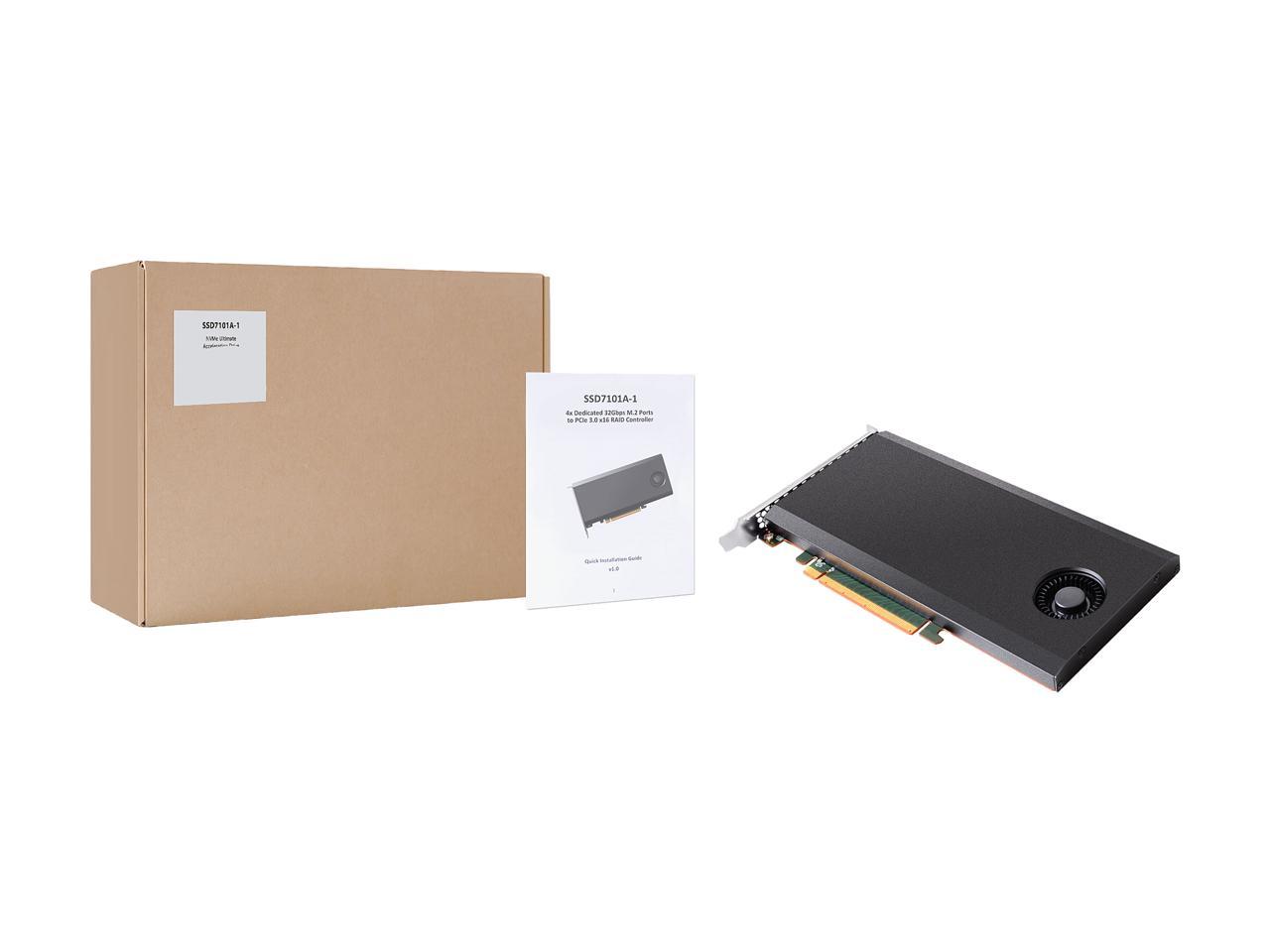 The HighPoint SSD7101A is a great accelerated secondary storage solution for any workstation with true PCIe 3.0 x16 bandwidth. It has four M.2 NVMe ports to take four NVMe M.2 SSDs, so each NVMe M.2 SSD has dedicate PCIe 3.0 x4 bus bandwidth for extreme transfer speed compared with traditional PCIe 3.0 x4 NVMe solutions which have to share a single PCIe 3.0 x4 with the motherboard’s SATA and USB ports. It delivers transfer speeds 20 times faster than SATA SSDs. It is suitable for a wide range of performance-intensive applications that place heavy workloads on the GPU.

A Paradigm Shift for Workstation Acceleration

SSD7101 Drives pack the power of a 20x SATA SSD RAID Array into a compact, stand-alone PCIe device that can be easily installed into nearly any type of workstation! This unconventional approach to NVMe storage represents a paradigm shift in the development of workstation acceleration solutions. Compact workstations can now tackle complex projects and workflows that were once exclusive to specialized hardware platforms.

HighPoint SSD7101 Drives have integrated Samsung’s ultra-high performance 960 PCIe M.2 modules to deliver over 12GB/s of I/O performance and up to 8TB of storage capacity via a single PCIe 3.0 slot, and over 20GB/s and up to 16TB in dual-drive configurations! The 960 EVO class modules deliver blistering transfer speeds and were designed for applications that require maximum I/O transfer performance.

SSD7101 series drives are truly independent, stand-alone solutions, and are not limited to specific applications or hardware environments. SSD7101 solutions are available in 500 GB to 8TB form factors, and unlike conventional PCIe SSD’s, are not restricted to a particular workstation or motherboard and can be used with any platform that provides a true PCIe 3.0 x16 host interface.

Unlocks the True Performance of NVMe SSDs, Hindered by Onboard DMI 3.0

HighPoint’s SSD7101 drive series unlocks the true potential of NVMe SSD’s. Unlike onboard DMI 3.0 based NVMe solutions, which are forced to share a single PCIe 3.0 x4 lane with the motherboard’s SATA and USB ports, SSD7101 drives feature dedicated PCIe 3.0 x16 bus bandwidth. This unique architecture allows the drive to interface directly with the platform’s CPU, which provides PCIe x4 bandwidth for each NVMe SSD! The HighPoint NVME Management Solution’s seamless interface was designed to accommodate applications that require transfer speeds exceeding 12GB/s, or capacities larger than 8TB. This simple and versatile storage solution can easily scale performance to match the requirements of each application.

A single SSD7101 series drive can aggregate up to four M.2 SSD modules at PCIe x16 bandwidth and 4TB of storage capacity, and double that when used in dual configurations, all at a price per GB comparable to that of traditional SATA SSD-based solutions.

It’s no secret that PCIe devices can generate a great deal of heat, especially during peak operation. HighPoint is no stranger to PCIe design, and has engineered the SSD7101 Drive Series to excel in high-stress conditions. The all-aluminum casing naturally dissipates waste heat away from the SSD modules, and features an integrated fan and heat sink that work in conjunction to eject excess heat away from vital components and keep ambient temperatures manageable and cool.

SSD7101 Series drives feature an easy-to-configure SSD drive module with integrated TRIM support and SMART monitoring. TRIM support promotes the longevity and endurance of each SSD while SMART monitoring allows customers to keep close tabs on the physical attributes of each device. The simple, intuitive interface provides a wealth of monitoring and configuration options for novice and experts alike. The Quick Configuration menu allows new users to get everything up and running with a few simple clicks. In depth, Advanced Options allow experienced pros to fine tune configurations for specific applications. S.M.A.R.T. Monitoring - the interface includes a SMART monitoring feature which allows you to check a variety of physical attributes of each SSD, including temperature readings, total bytes written and disk usage values

Pros: It works. I installed in my Asus X99-E WS USB 3.1. Very much plug and play. Contrary to the description it works with other Samsung NVMe drives. I have two 512gb SM951 drives installed in RAID 0 configuration. This Highpoint solution is basically a clone of Intel's VROC solution minus a few changes in the layout. Probably has something to do with copyright infringement. The hardware shows up in device manager as virtual RAID. The same as Intel's solution. Unlike Intel's solution this card works with X99 and X299 systems. Also unlike Intel's solution you don't need to purchase a specific key to enable RAID features. Cons:

Cons: None. Highpoint support informed me that they are working to enable as a boot drive

Overall Review: If your looking for X299 storage features on a X99 system then look no further. This is as close as it gets.

Pros: Very heavy, well built card with active cooling. I have this configured with 2X Evo Plus 1TB SSDs configured in RAID0 w/ large VMs hosted on it in a 2950X system with 128GB. The card is extremely stable, I never even look at it or think about it, which is what a high end product like this should be.

Cons: Performance is not gob smacking despite using 16X PCIe channels. Its good not great, but I can add two more drives I guess

Pros: -contacted HighPoint through their website (there is a document that shows you how to make a pre-sales support ticket) and they confirmed it would work on Asus P10S WS (they responded in 4 hours) -booted without issue, just installed the driver and the web-based GUI to create the array -Samsung Magician doesn't work through SCSI interface to monitor the drives, but the web GUI shows you SMART info and the number of bytes written, which is what I wanted to see for wear indication

Cons: -the M.2 standoffs make the screws a little hard to get started -4x 970 EVO Plus 500GB drives in RAID10 benchmarked at 6GB/s with passmark on the highest block size. I don't know if I need to tweak something in the BIOS, the driver setting, or the actual test. Should be hitting twice that speed, but for now it works pretty well. E5-2687W processor has 40 lanes and I'm using 16 for the GPU, should be plenty left for the RAID card.

Overall Review: Using it as a giant swap drive, which has made the system way more responsive :)

Cons: I can not be booted to so OS must be installed on different drive.