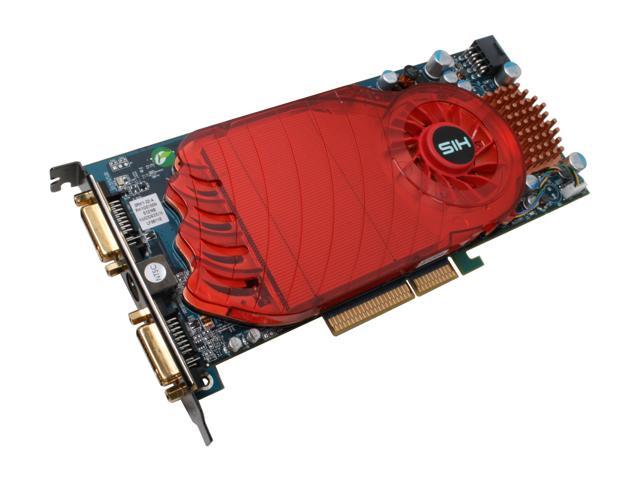 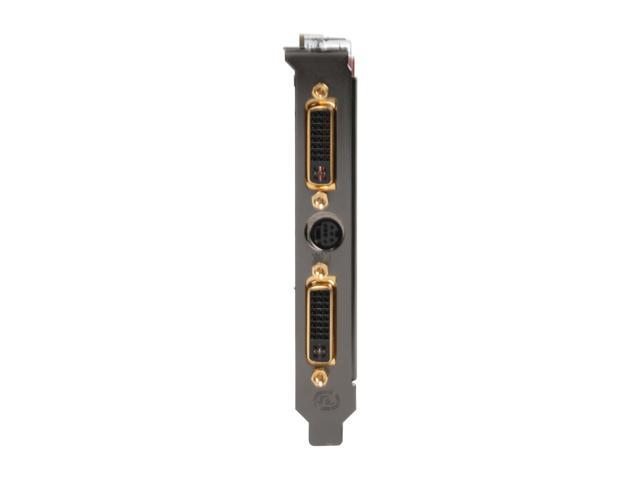 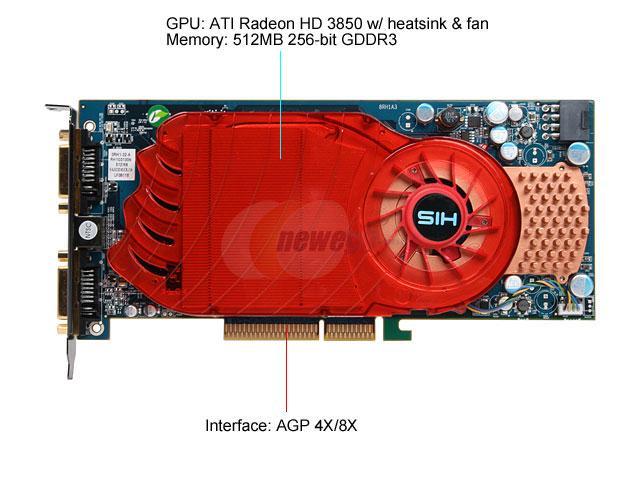 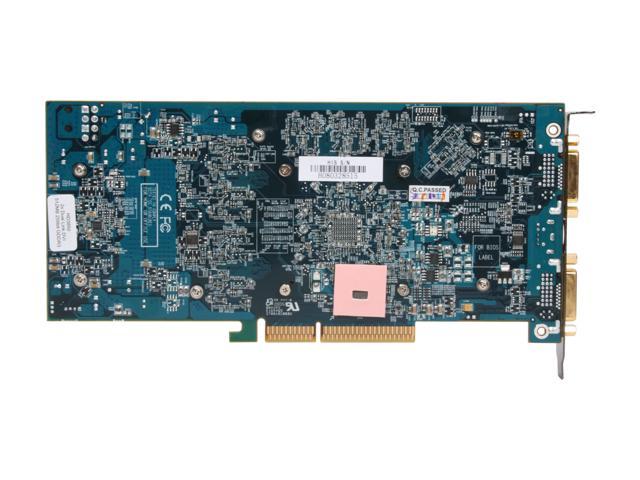 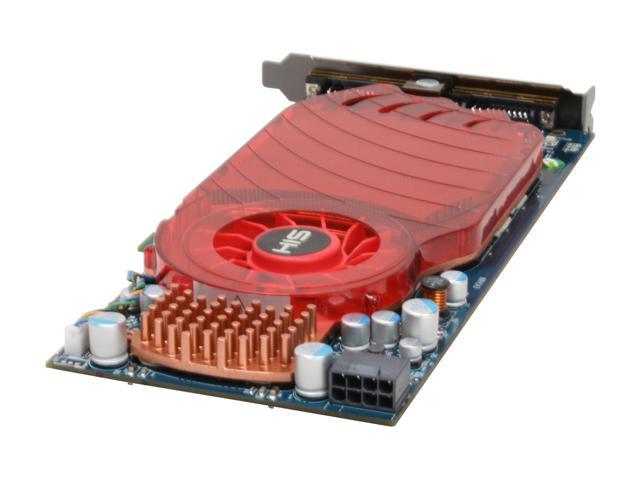 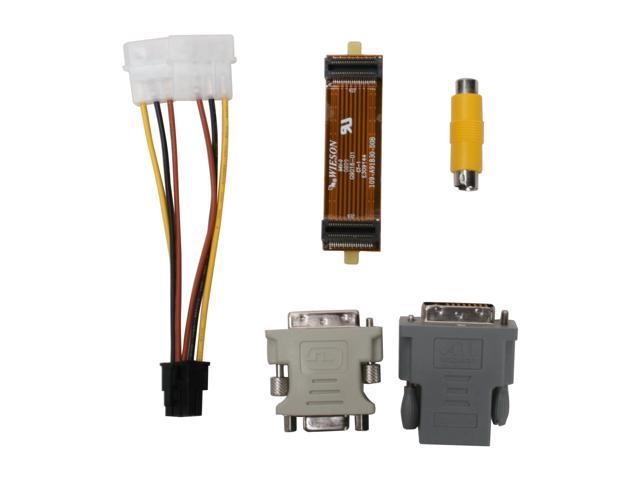 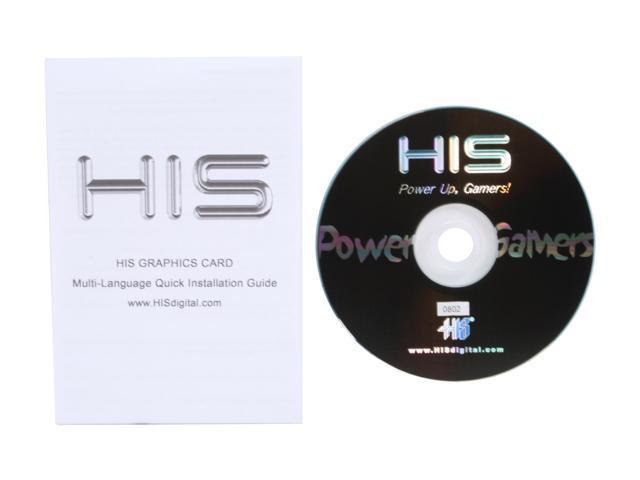 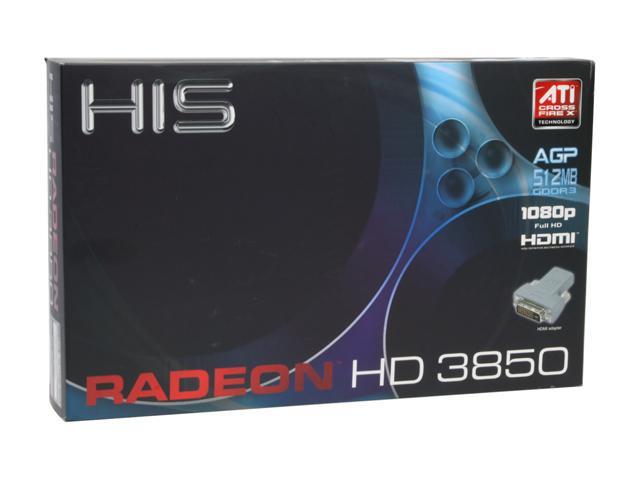 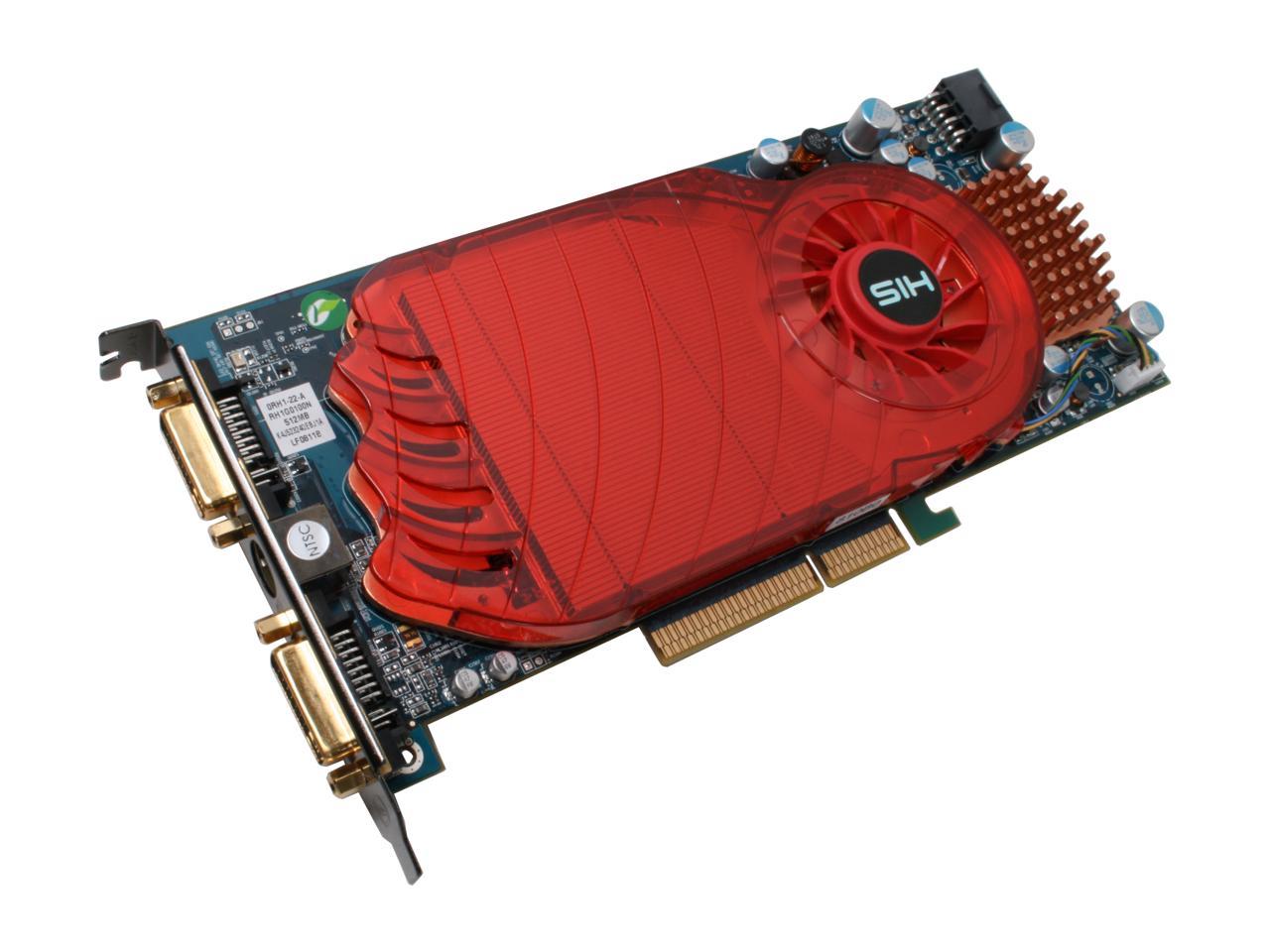 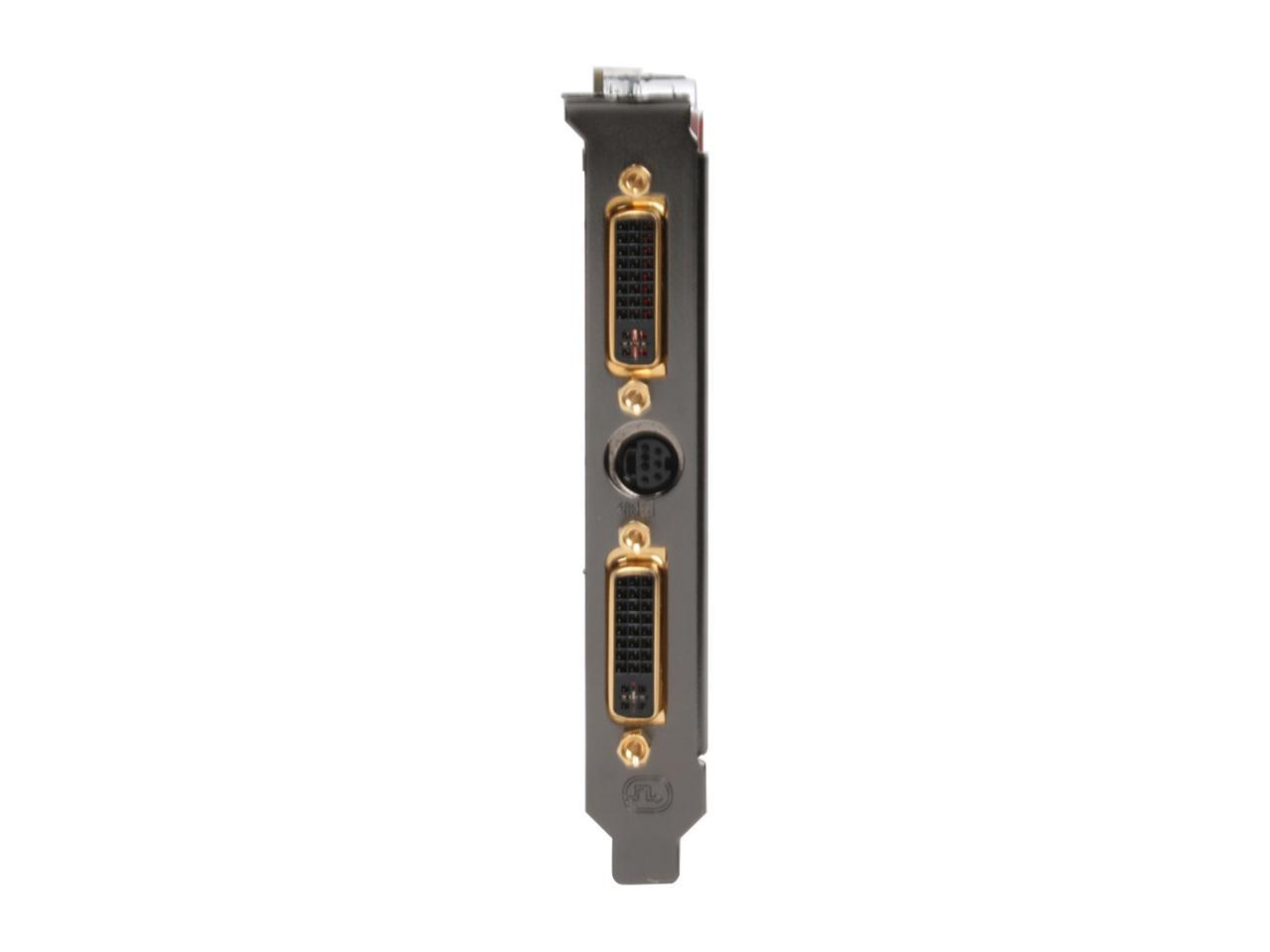 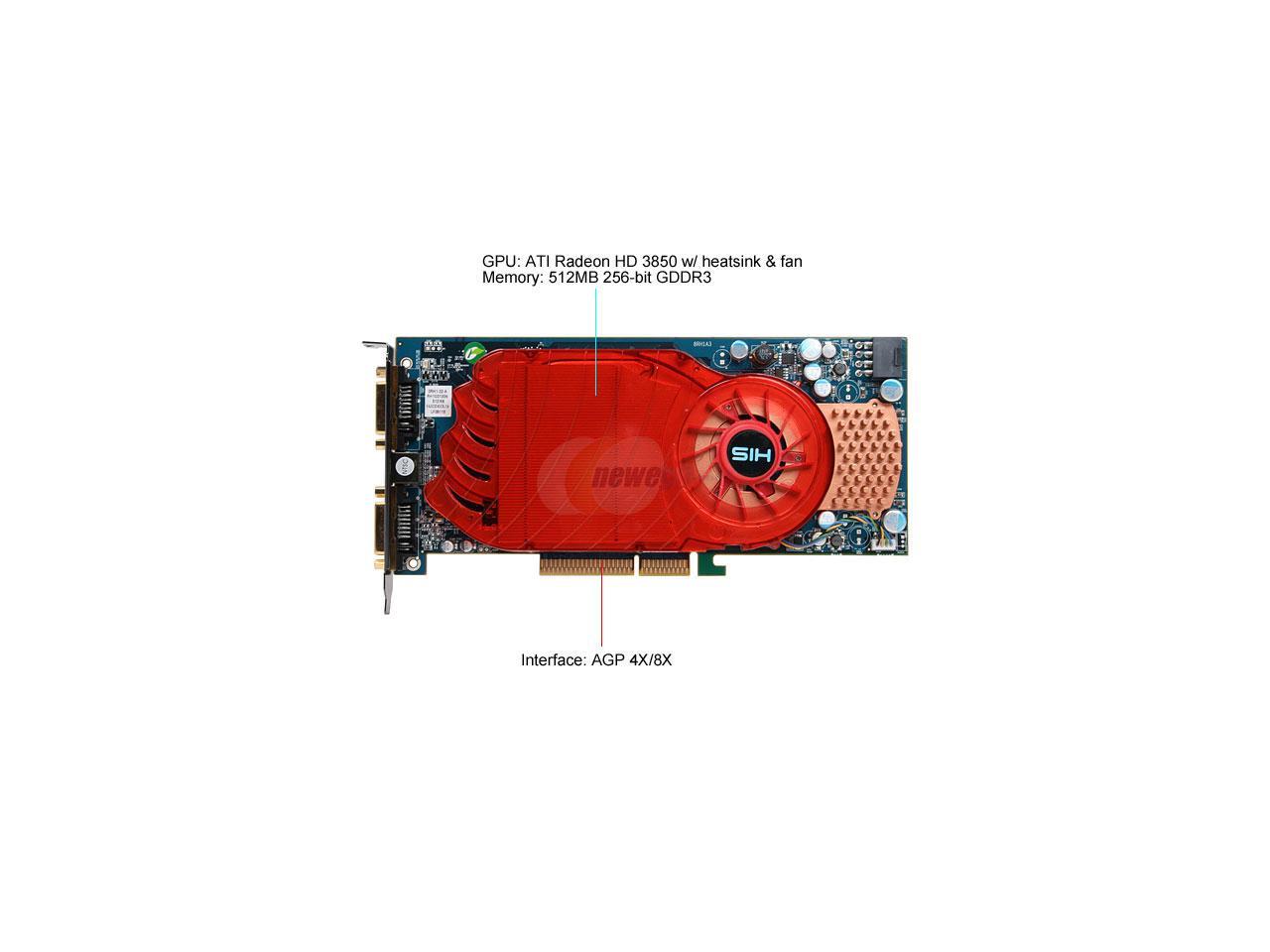 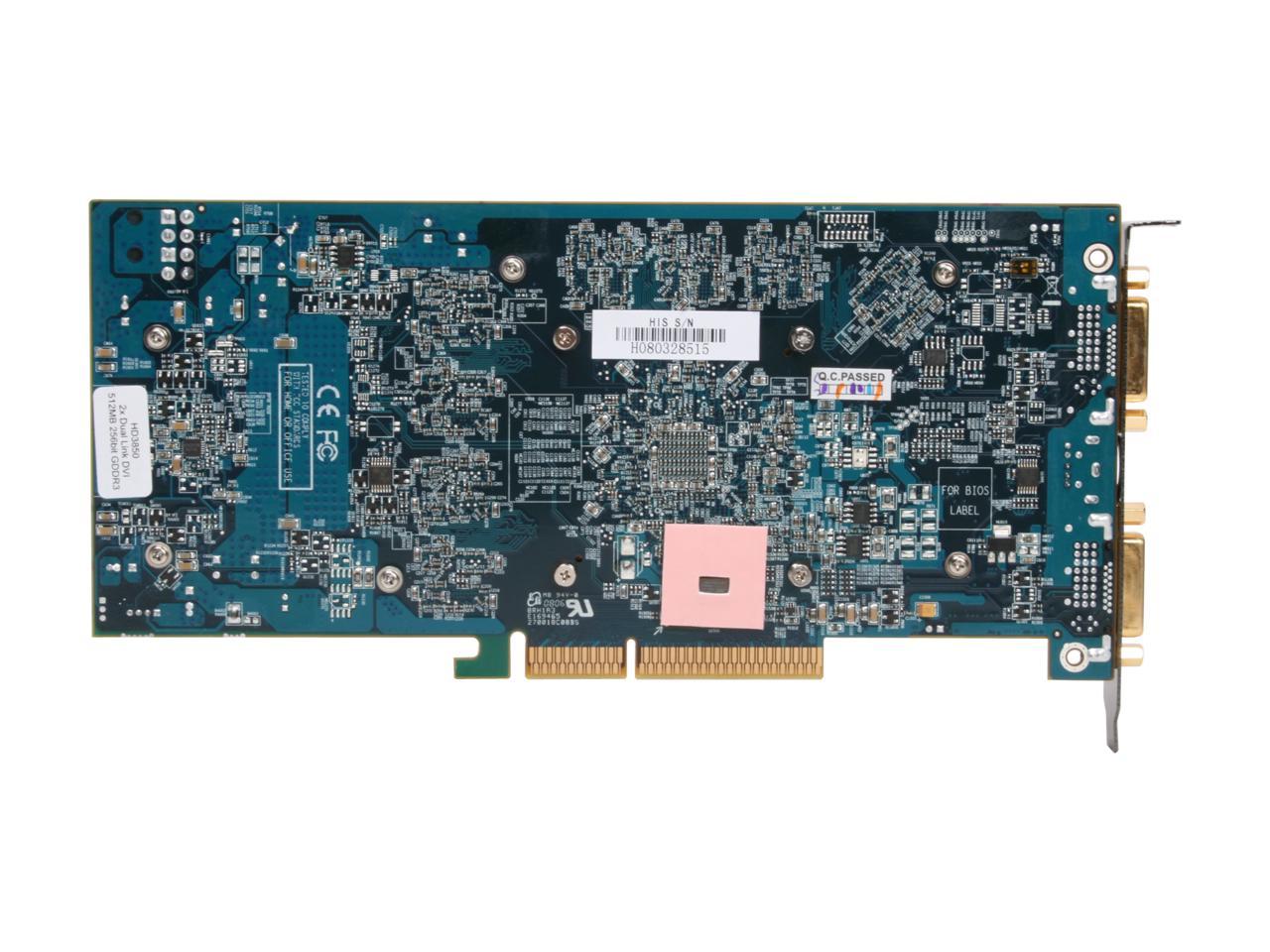 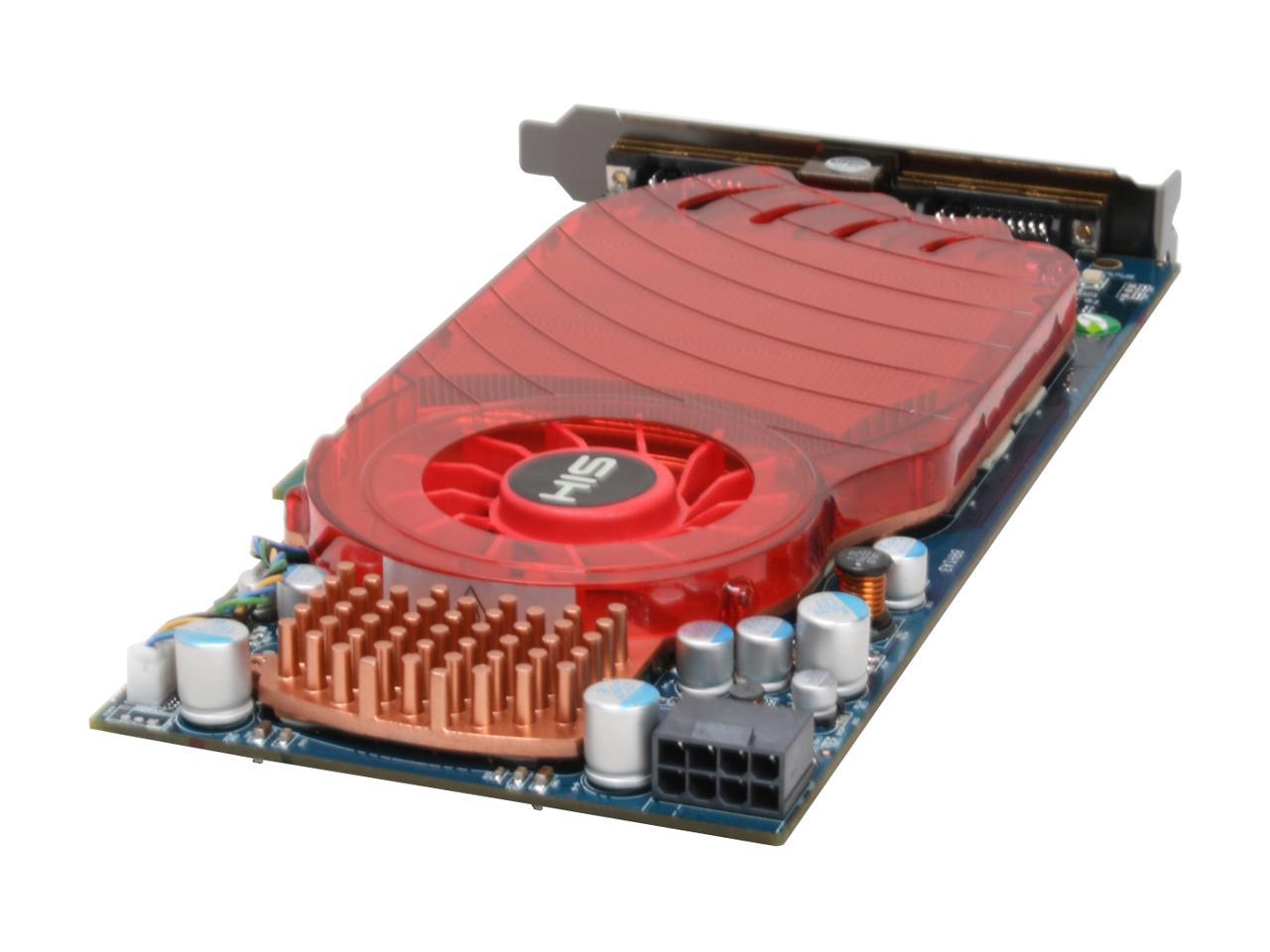 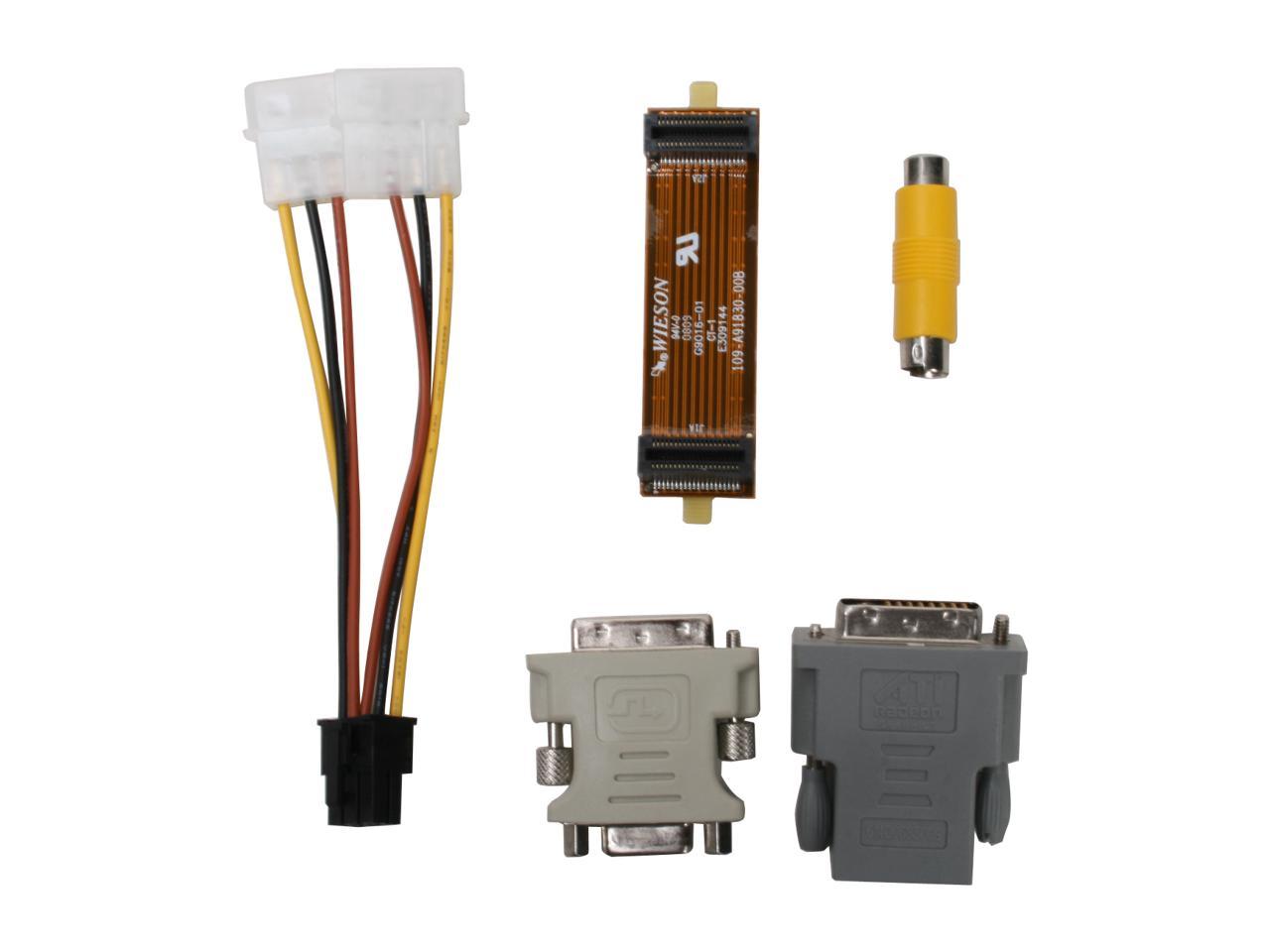 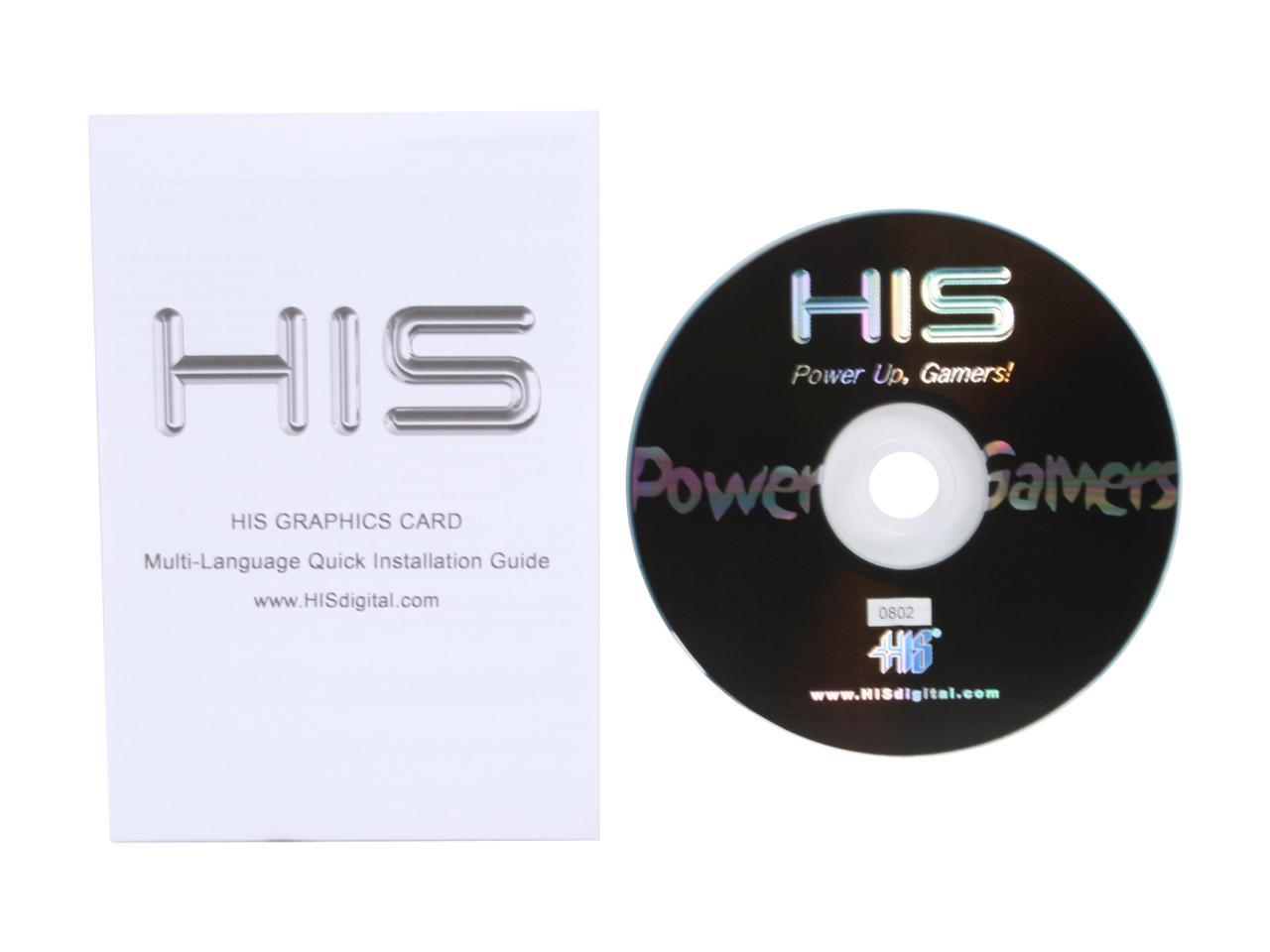 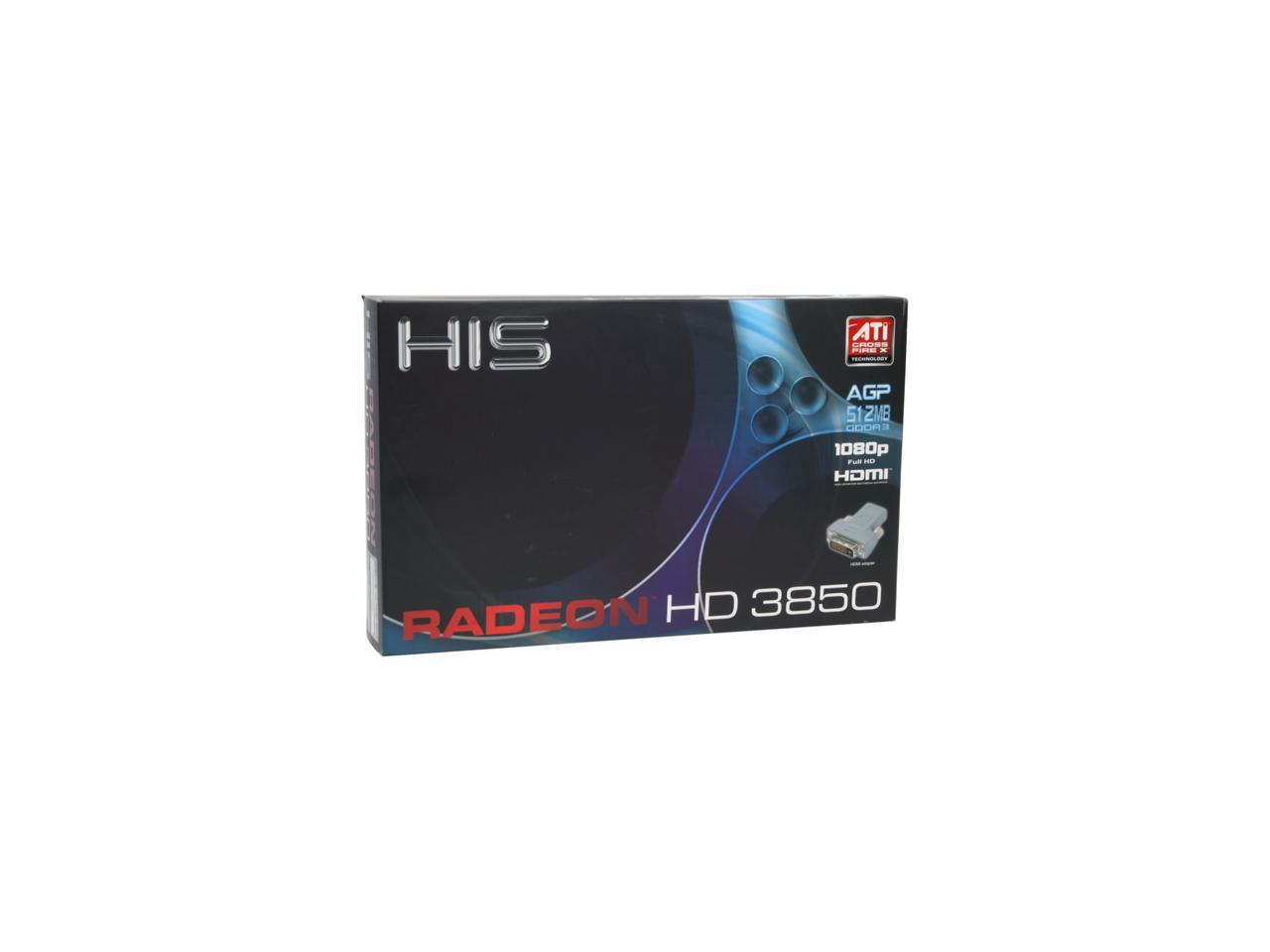 Overall Review: I bought this card after reading all the reviews on here, but seriously, it was very simple to install. I just downloaded the hotfix, installed the drivers, then installed the hotfix and I was up and running. Incase anyone happens to have the same problem with the sound I did, I wanted to keep using my mobo's sound, so just go to the bios and make sure it isn't disabled. 3dMark06 score went from a 700 with my fantastic x1300 PCI(not e) to 11,000 with this card. I went from an avg of 31 fps in CS:S to 122. Crysis runs beautifully on med detail, and playable on high, Oblivion looks amazing. My system is a 3400+ Athlon @ 2.4, 2 gigs OCZ PC3200 ram. Don't listen to the naysayers it's easy to install with a little effort.

Pros: After owning two of these HIS 3850 AGP models (i like the single slot thinness, got that?), I can state the following with a fair degree of confidence : On all of my ancient PIII systems (AGP 4x) that I've deemed as having no capacitor failures and at least 18 amps rating on 12v lines, (and XP+SP2 / SP3, and adequate ventilation), these HIS cards work well, often leaving their CPUs far behind. These work with all the "AGP Hotfix" Catalysts from ATI's site that I've tested (e.g., 8.5, 8.6, 8.7, 8.8). I have not tested the HDMI Audio drivers that go with these catalysts, and these audio drivers must be installed manually, but there is no reason to believe these would not work as well. These cards have been generally good to me, either with overclock (789-810gpu/1044-1080mem) stable, or with a certain "folding" GPU2 client, or with a certain 3d..bench..mark05 that is no longer a slideshow.

Cons: I bought one of these cards at newegg but it arrived as an open box item, which i did not expect. However, I've had no obvious technical issues with this card, and I'm fairly certain newegg would have made good on any problems, as they generally do. In my experience, the only significant "cons" so far would be two possibly common issues which may or may not plague ATI hardware as a whole. That is, 1) the old spinlock bug .. 2) problems with hardware acceleration of video @ wmv9 format.

Overall Review: As long as you don't have any power-delivery issues with your AGP motherboard or PSU and no cooling/ventilation issues and you run at least Win XP + SP2, you should not have a problem with this card using the current "AGP Hotfix" Catalyst drivers from ATI. As a point of reference, I have one AGP motherboard which is truly shot up (e.g., bloated semi-functional capacitors near AGP slot and CPU socket). It's also mated to an ancient PSU with 12v / 12amp lines. Well guess what? The card doesn't work very well in this environment. Given the somewhat misinformed gripes I've seen, I just had to try it. Yep, doesn't work too well under incompatiable physical conditions, at least with the settings in the stock rom. ...and don't bother trying to get it to work well under Windows9x/2000, unless some third party modder makes it happen. Disclaimer : Buy at your own risk. If this card doesn't work for you, not my problem. You're free to research on your own before making a purchase.

Pros: New Update. Card still runs like a dream. Although use the HIS drivers available on their website, and use the latest AGP Cataylist made available June 2008. Everything was fixed, no studdering. FPS went higher. Awesome card. HDMI was great, was able to runs both 22 inch samsung and LCD Sony TV in 16:9 mode simultaneously. Games look incredible.

Cons: None. Are you kidding? 3x the performance and still AGP!

Overall Review: I still get delay on some games from my keyboard, but I believe that's because I'm not using a USB keyboard.

Pros: As far as agp cards go it is fast. supports DX10 and unified shaders are nice. HDMI support and dual monitor support.

Cons: HOT and I mean hot. there is a IC on the top side of the card that runs hotter than the GPU.

Overall Review: I guess the only issue I have is the temp but when you think about it if it last two years I am fine with that as agp has been out for a while and this is just so I don't have to replace my media pc.

Pros: The obvious PRO is I stretched out my old system which realy isn't that old, just Athlon based. I'm not a hardcore gamer but I like to fly FLight Sim and wanted to go to FS 10. There was no way my wife would have agreed to a new system but for what I spent on high end upgrades I have a screamer for less than a discount Dell. I have an AGP motherboard so this was the best card based on specs and price. It's nice looking, but my case is sealed. Has good cooling. Worked on first run but prepare for driver woes and some bios tweaks. If the fan spins it's working, but it may take some sorting out to see the results.

Cons: Install was so-so, the booklet and the HIS website could have made attaching the power easier. The card is long, I had to move a hard drive and some cables. It is very solid. Drivers on the disc stink, and they will corrupt your audio settings. I spent a few hours sorting out the HIS site, Radeon, and other driver sites. I also had to tweak AGP settings in bios, but WOW, it is screaming now.

Overall Review: If you're cheap like me and can live with a semi-home built AGP system, this is the last of the line and the best AGP spec card ever.

Pros: Had a 6800gs and i saw this thing come out! What a beast! Great increase in performance. 2 thumbs up!!

Overall Review: I came onto Newegg to start putting together a new system for myself and i saw this! =) sorry Newegg maybe next year you will get more money =P

Pros: The best AGP card you can buy. Runs incredibly well. Even on older systems you will see an increase in frame rates. I used it to upgrade an old computer. Had an Athlon XP 3000+. 1 Gig of ddr 2700 ram. I noticed that my framerates improved dramatically from my old 6800 Geforce. I decided to build a new cheap dual core using an Athlon 64 x2 5000 black edition with 2 gigs of DDR2 800 ram. Running windows xp. Now games fly. I have had no problems with this card. I installed the hotfix from amd's website. If you have an agp system still don't look for other solutions. Get this card. It will be worth it.

Cons: Cons for this? None to speak of. Simply the best AGP solution around.

Overall Review: Great for an HTPC using older parts. I am currently building a new pc for gaming. This card is the heart of my budget HTPC now.

Pros: Amazing! My rig is a 2003 home built system: Case: DreamerX II AMD Barton 3000+ (2.1Ghz) 2 X 1 Gig Corsair XPS Gaming memory PC3200 (400MHz) 2-3-3-6 Seagate SCSI 80Gig 10000 RPM (SCSI 160Ultra Card) ASUS A7N8X-E (400 FSB) Thermal Take Power supply 480Watt I preivously had a ATI Radeon 9800 XT pro that cost me $400.00 at the time and was top of the line. This new card blows this thing out of the water at just under 1/3 the cost I paid 5 years ago. I went back a played my old games, UT2004 with max settings, Star Trek Eliete Force maxed out, and DOOM3 and Quake 4 all running like they were games that I had never played before. As everyone has mentioned in these reviews, use the drivers now available on the ATI website, both the 8.8 version and AGP Hotfix. The card will run games like a dream. I have been dealing with Newegg.com for 5 years now and have received all items with quaility customer service and efficiency. Newegg rocks!

Cons: Driver were good until I realized that the HDMI sound driver was not loaded without the CD install, so I had to uninstall the 8.8 fix, install the CD contents, then go back a remove all the files with the exception of the HDMI files, and then, reinstall 8.8. Just took some time which I don't have a lot of, but once a did everything seems to work. I can't complain. Be sure to disable open GL on oldergamess, seems to have problems running that option considering it doesn't have those drivers.

Overall Review: Could not run most benchmarking tools from futureware to see how well my system performed after the new card install. But seeing is believing for me. I also don't have a blue ray or HD-DVD reader so I have not tested the HDMI on my SONY LCD TV yet although, the card did recognize the tv, and the HDMI adapter worked just fine, tested various resolution settings with high degree of sucess. Quake 4 did stutter a little even I cranked up the over clocking of the card 50+ percent, however, I believe this to be an issue of system memory. I plan to add more gig and see what happens.