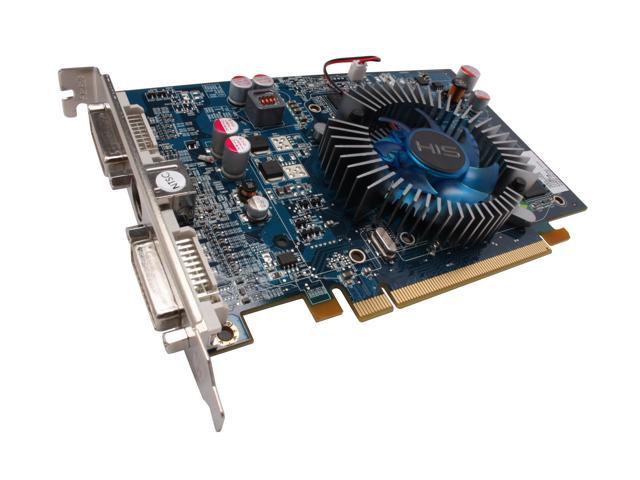 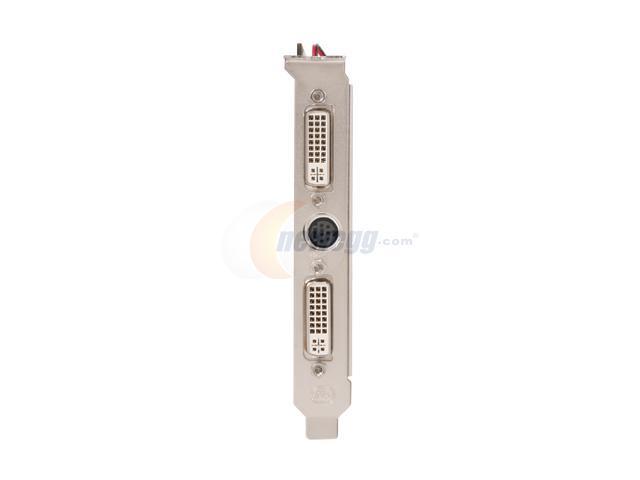 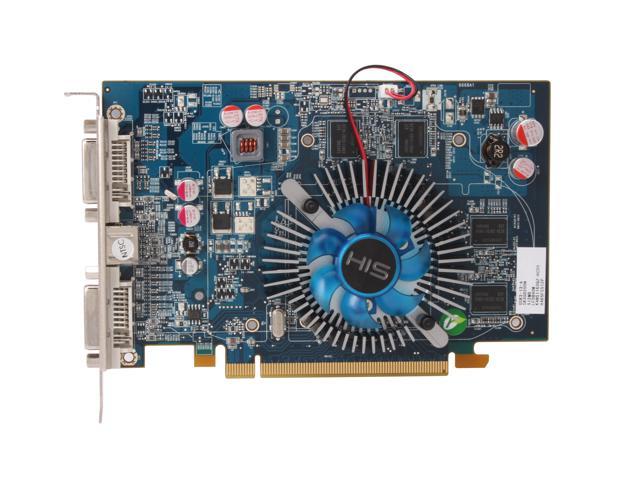 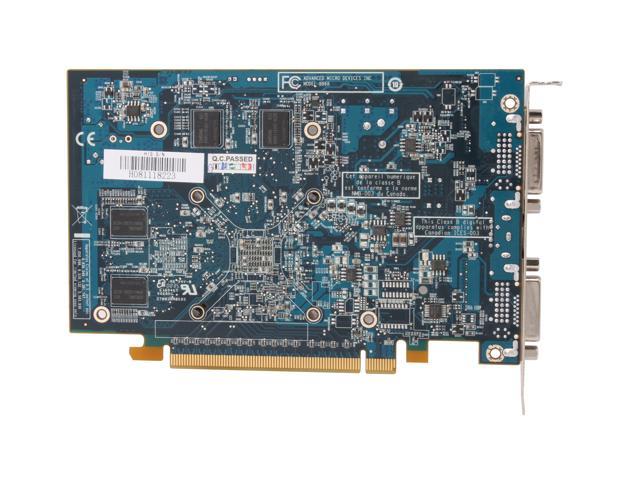 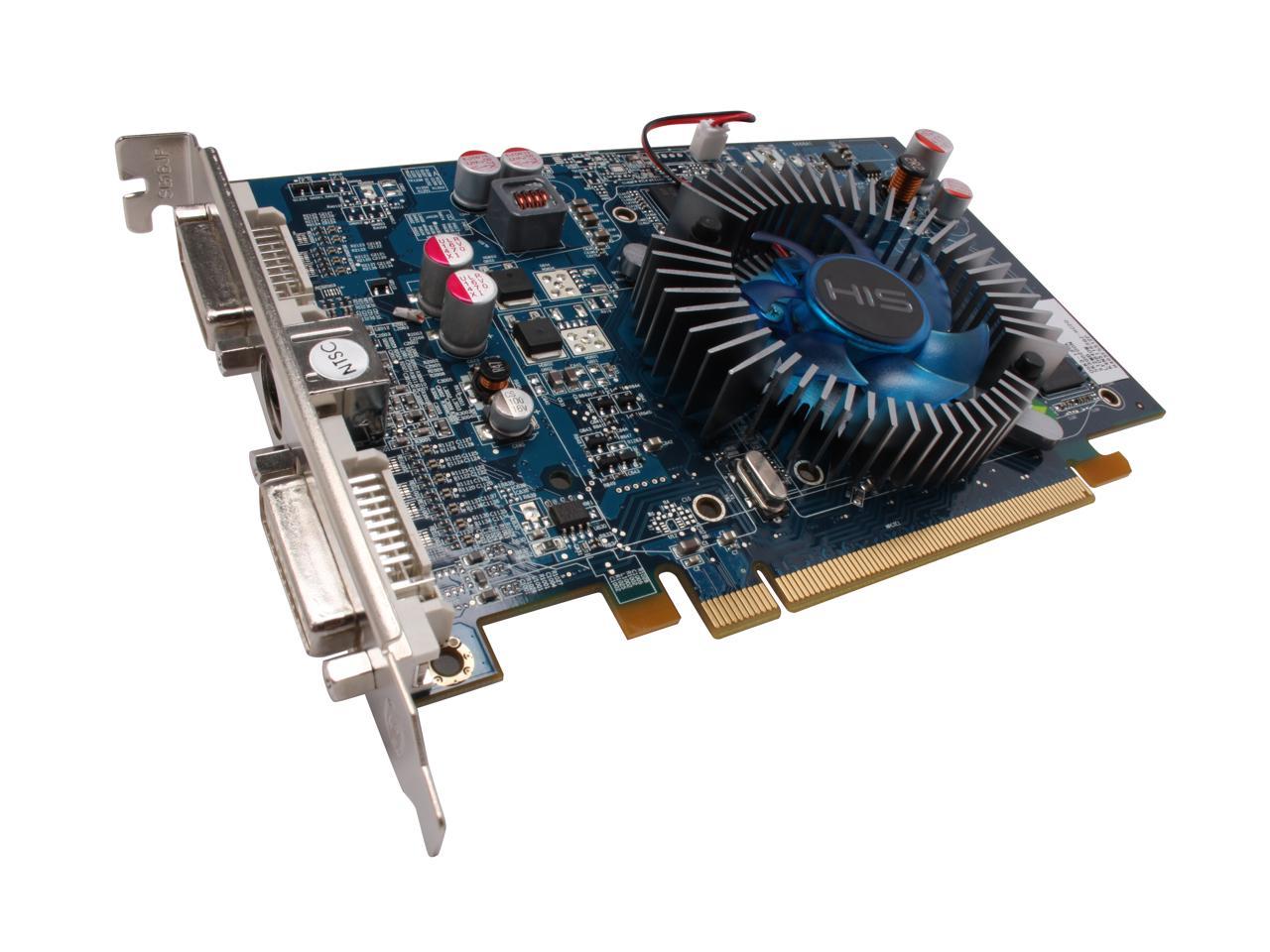 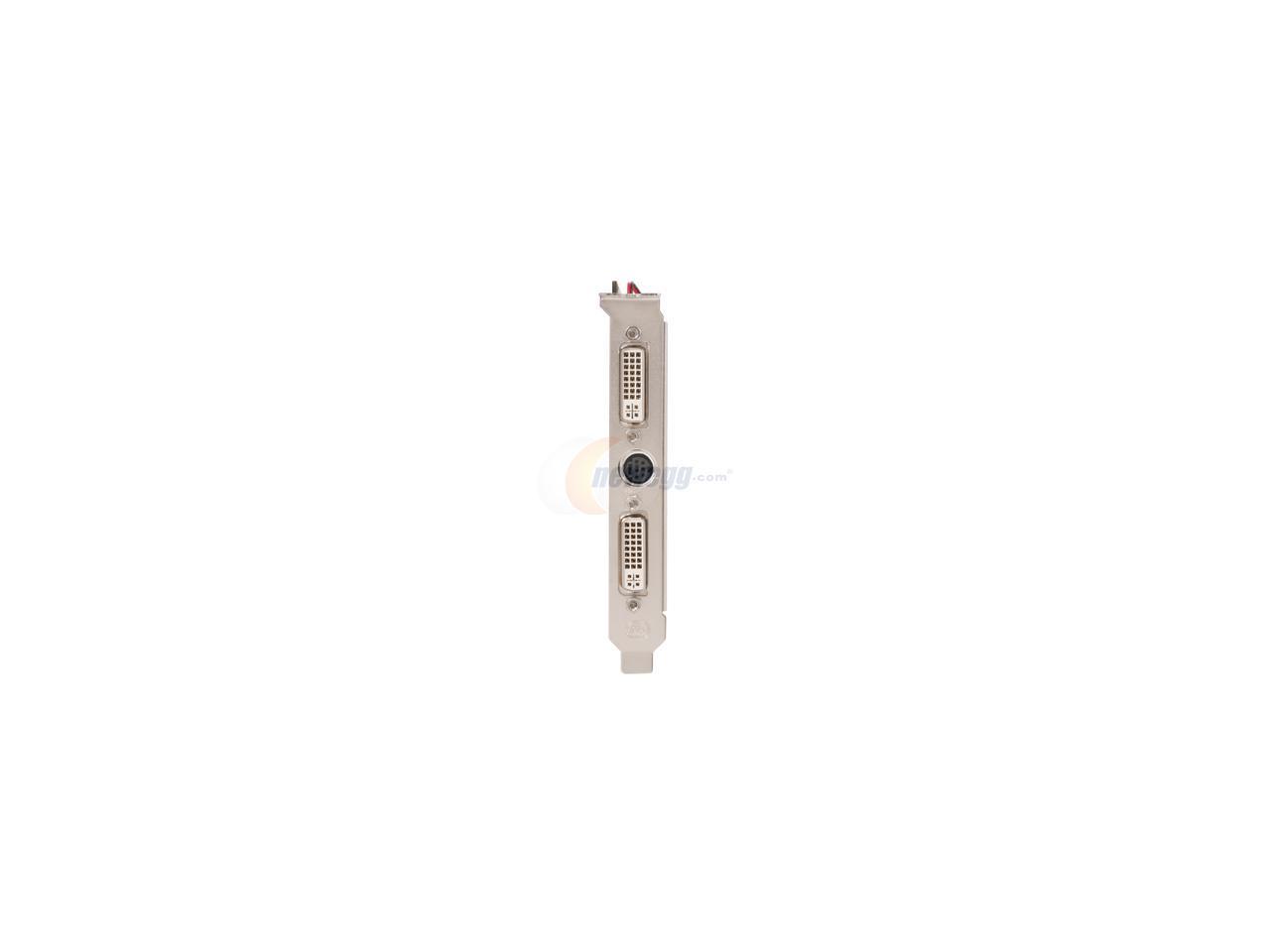 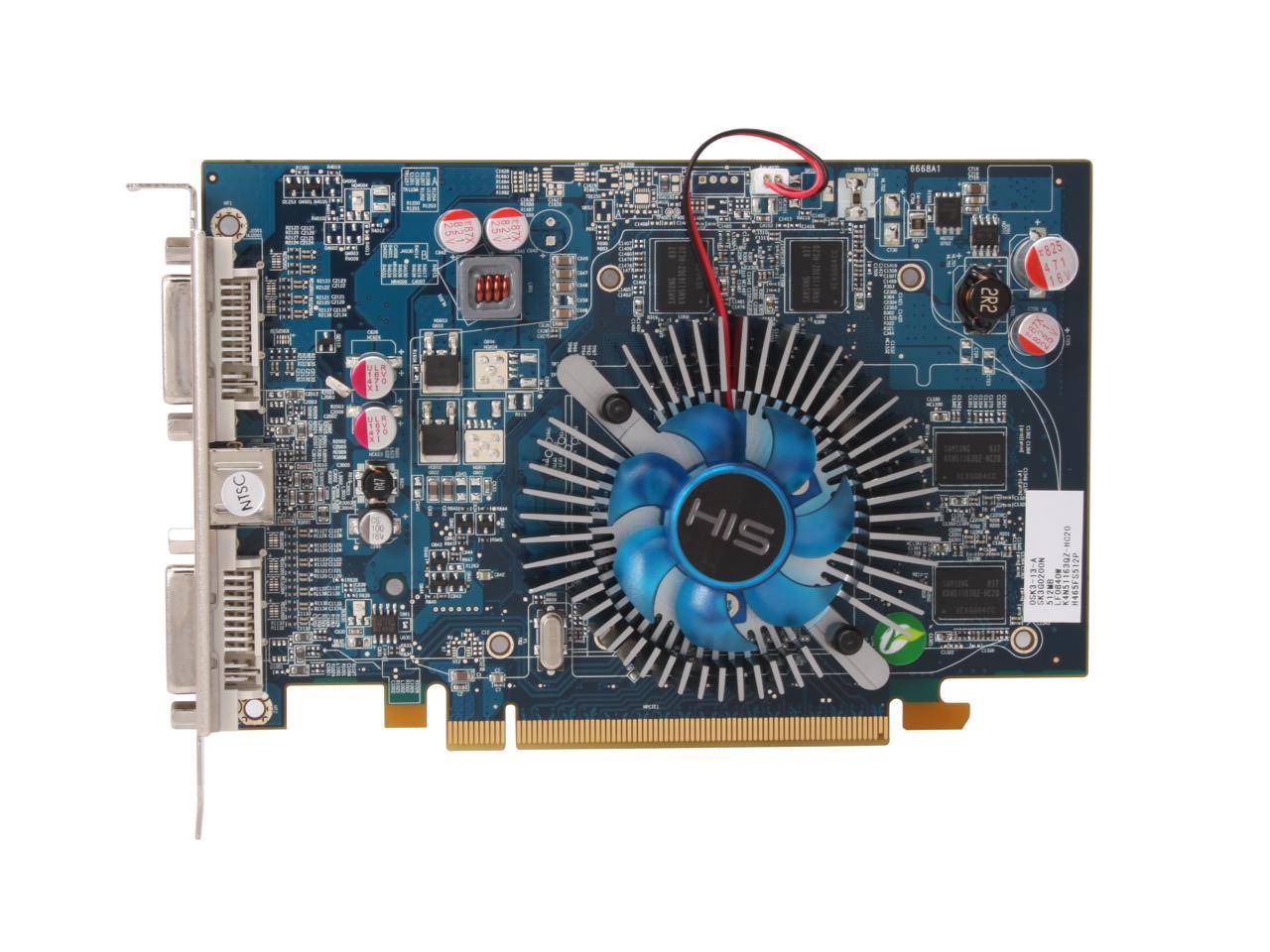 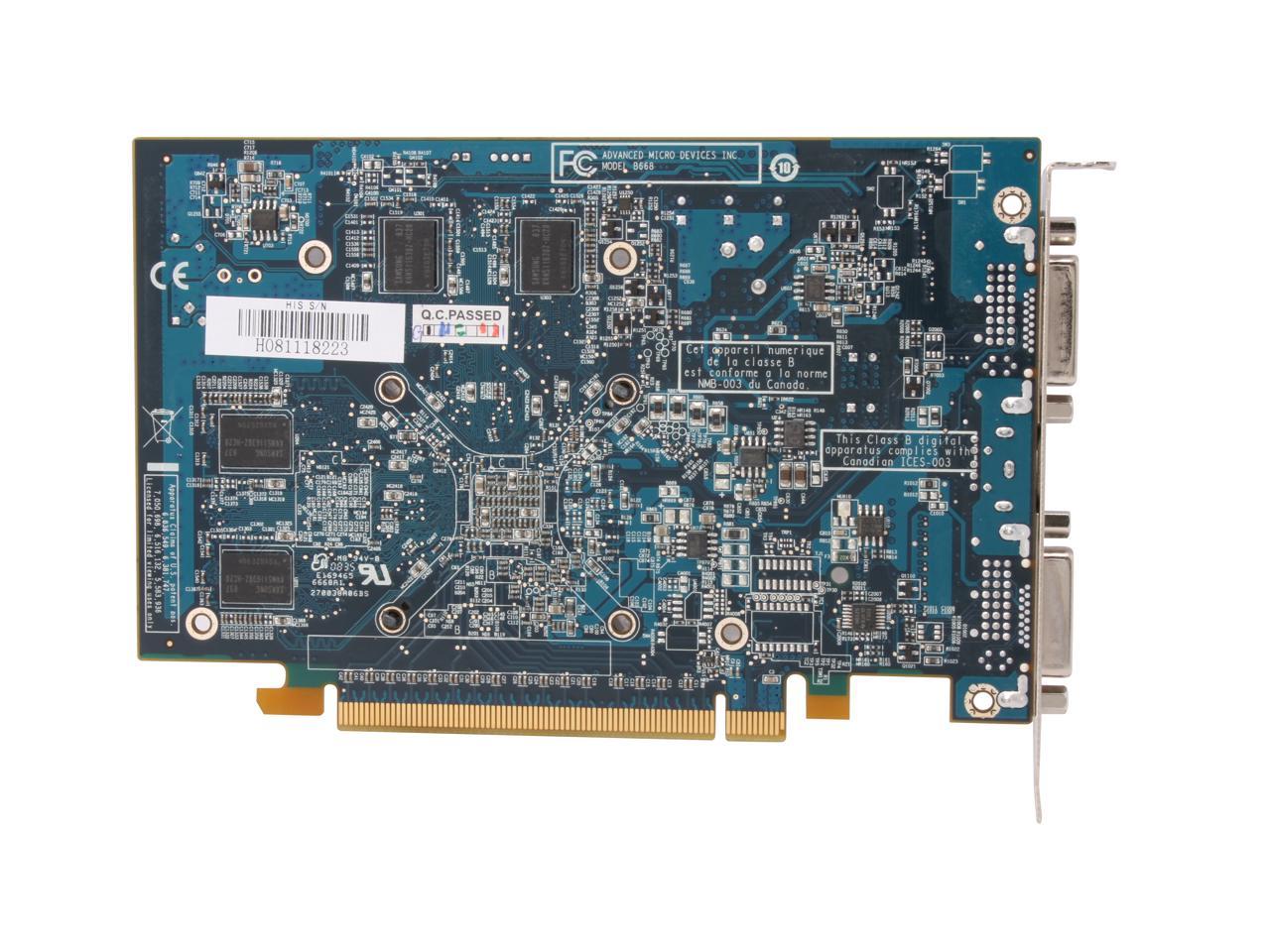 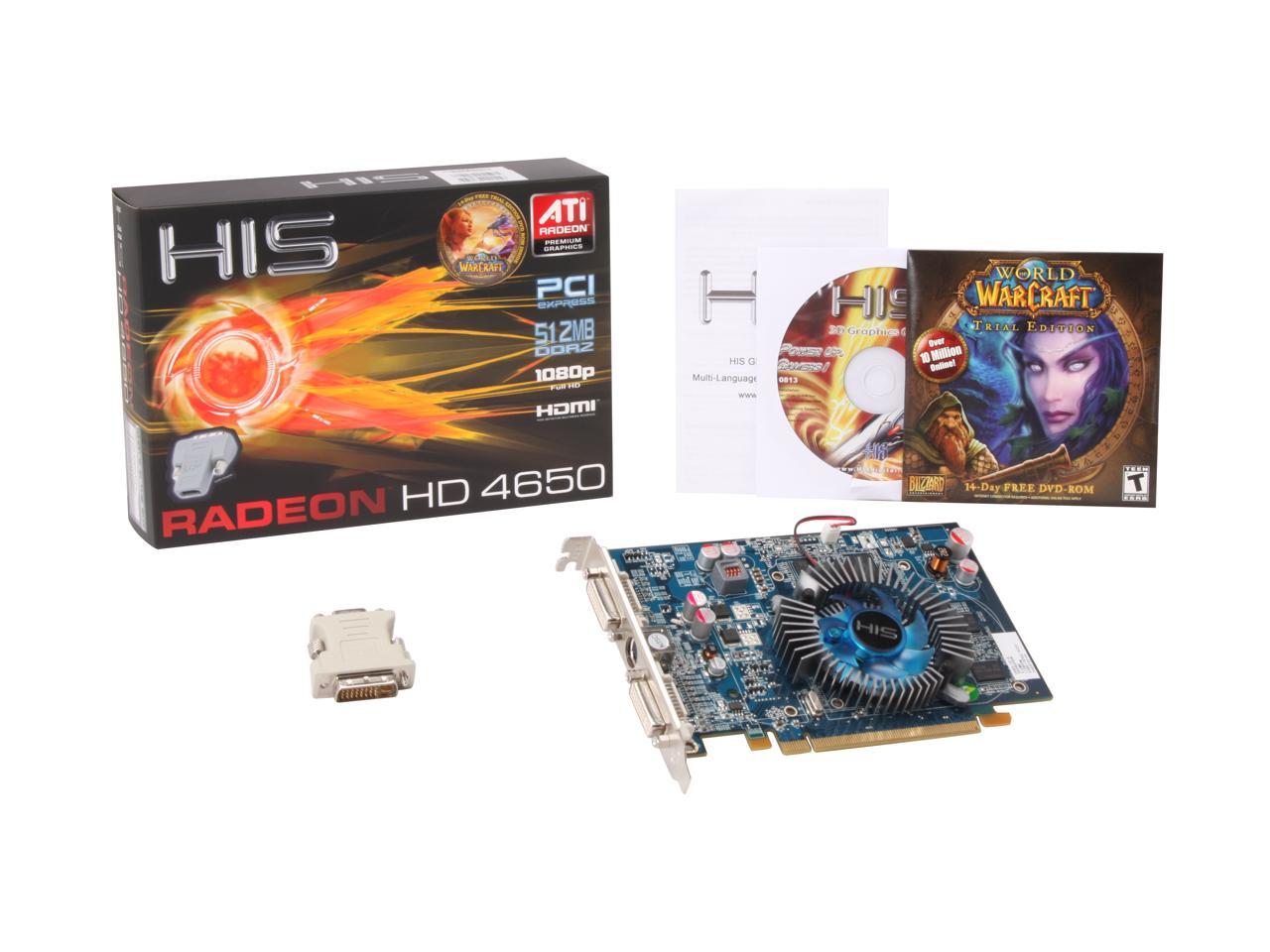 (97) Write a Review
OUT OF STOCK.
Specs
Reviews

Pros: Excellent performance for the price, low power consumption so it won't require a PCI-E power connector, short card will fit in any case, image quality is great, fan pushes more air that what you would expect, and runs very cool at idle or low loads. Dual DVI, with adapters for VGA (RGB) and HDMI included. While the specifications mention the RAM as 800 MHz effective (400 MHz clock), the memory chips are Samsung K4N51163QZ-HC20, rated with a latency of 2.0 ns, which means they are good for a 500 MHz clock (1000 MHz effective). Indeed, both the catalyst control center and GPU-z report the memory clock as 500 MHz, standard as any other HD4650. The card will run almost any game at high settings in a 1280 x 1024 monitor, and minor tweaks will allow 1680 x 1050 gaming.

Cons: Fan can get a little noisy under load. Very spartan package bundle (DVI adapter to VGA, DVI adapter to HDMI, CD with drivers and card) While its big brother (the HD4670) redefined mid range gaming, the 4650 is more humble. The 4650 performance is somewhere between 60%-65% of the 4670, manly because of the much slower memory. In fact, the 4650 is barely faster (if any) than a GeForce 9500GT, which is comparable in power consumption and can be had even cheaper.

Pros: This card was a snap to install. Windows Vista 64 bit recognized it instantly and after downloading and installing the latest drivers from ATI it was good to go. The fan on board is pretty quiet. I was expecting much louder from the reviews I had read. I mainly purchased to upgrade from integrated graphics and to play WoW, which it plays effortlessly at 1680x1050 resolution with all settings on high. It produced a Vista gamer score of 5.3 (up from 4), and an overall score of 5.

Cons: There's no complaints with this card. HIS website is slow. I would recommend getting all support and drivers downloads directly from ATI.com

Overall Review: I recommend this card as a wallet friendly upgrade from integrated graphics. It suits my personal needs as I don't plan on playing anything graphic intensive on it. It runs Aero and Wow perfectly which makes me a happy camper.

Overall Review: I have never purchased an "HIS" brand video card before, but was willing to give it a shot due to its good reviews and its cost vs. performance. If you are on a budget, or only play one or two pc games, as I do, then this card is it. I only play World of Warcraft on my system, and recently build my new system, and it has PCI-E, my last pc was AGP, so I could not carry over my Radeon 9600XT. So I went looking for the best low-cost card for the job, and this is the card. Runs WoW great @ 1440x900, 4xAA and all goodies turned to max. I hear it runs more modern games quite well too, and this card seems to be a mid-level mainstream performer in the ATI lineup. It does the job well!

Pros: Low Price - At the price it is now, why get the 4550 or 4350? Decent performance (nothing to really judge against though). I am not a gamer. I got this mostly to drive my LCD TV. Low power - according to my "kill a watt" my total system power went from 65w using on board graphics to 76w with this card. I have a Dell Inspiron 530 (quad core 2 cpu, 350w power supply). Easy install - downloaded the drivers, put the card in, install the drivers, set the resolution, done. HDMI - just worked. After the install, I plugged in the hdmi adapter *that came with the card* and plugged in my LCD tv. Sound worked fine. See other thoughts.

Cons: Fan is not completely silent, but based on other reviews I expected more noise. It's not too loud. The fan on my ReplayTV is louder so I don't think it's bad. The day after I ordered this card, newegg started offering free shipping on this card. Too bad for me.

Overall Review: Some people have complained about losing their main system sound output. In Vista, I found that by right mouse clicking on the speaker on the system tray and selecting "Audio devices", I could use the window that popped up to select if I wanted the sound to go through the HDMI (Digital Output Device) or the System (Speakers) by setting it a "default".

Pros: Mine came withe the HDMI adapter, strange that they would quit including it, even the picture of the box on here shows it. When not doing any 3D the GPU clock steps down. The memory is clocked at 1000Mhz on my card.

Cons: Fan is louder then it needs to be, the card does not throttle the fan either (ATI software does but it has no effect), it spins at constantly high speed. The fan started to make loud buzzing noise at start up, it clears up after a min or two.

Overall Review: I am using this in an HTPC because my 6150 IGP could not handle 1080p. I already have a 780G mobo with HD 3200 IGP to replace this whole setup and use this in my office.

Pros: Excellent and very powerful graphics card. I'm not a gamer, but this actually prompted me to download a few of the open-source Linux first-person shooters just to try it out.... This runs XP very well, and also Linux. In OpenGEU Linux, I am able to install the ATI Proprietary driver and CCC just fine through "hardware drivers"(many distros have issues with the proprietary drivers). I was going to opt for the 4770(not that I need for what I use it for), but supply issues made me decide not to bother. AMD/ATI has a great pricing scheme, at every price point, they have an even much better product for a little bit more, you can't beat it. This is paired with a Phenom II 940 and a Gigabyte MA790X-UD4P, this is a truly great machine...

Pros: Just works. Pop it in, load up ATI CCC newest version downloaded from ATI and you're good to go. Huge upgrade over onboard graphics my kids were using. Runs cool and quiet too. Works fine for many games.

Pros: Great card for the price, i`m a casual gamer and it supports games like fallout in 1280*1024 with 48 fps, mediun settings, when i tried to run it in high setings the fps down to 25, low noise.

Cons: the ati sw is not the better, and the overdrive its worst, do it with a best sw oc