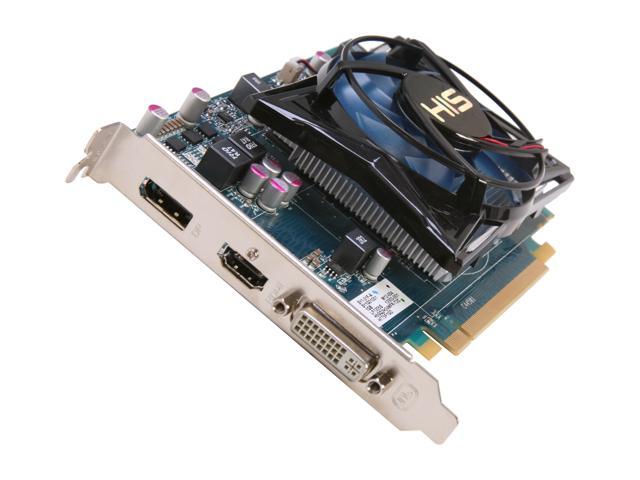 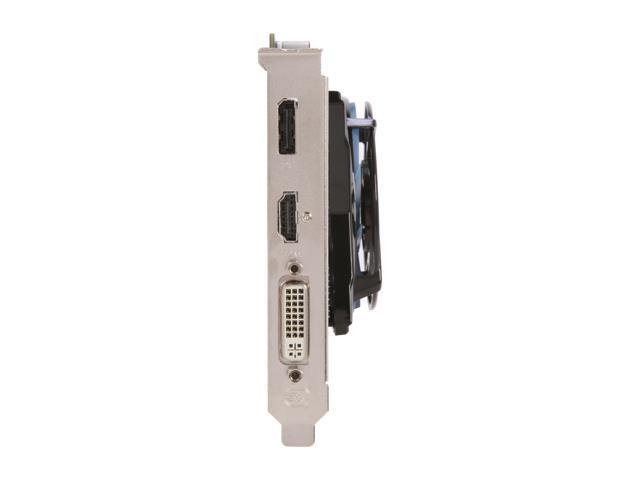 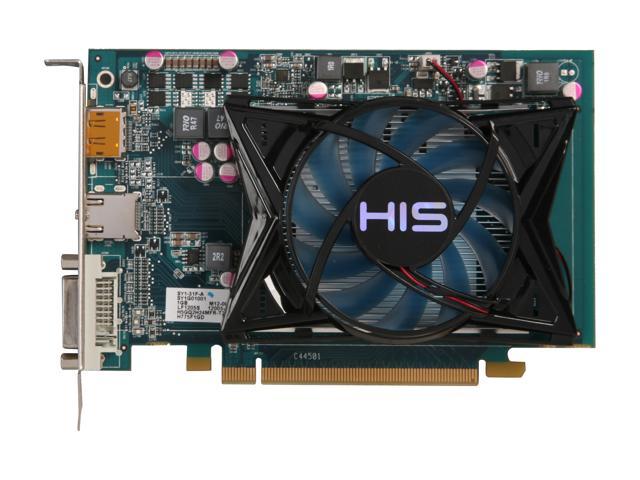 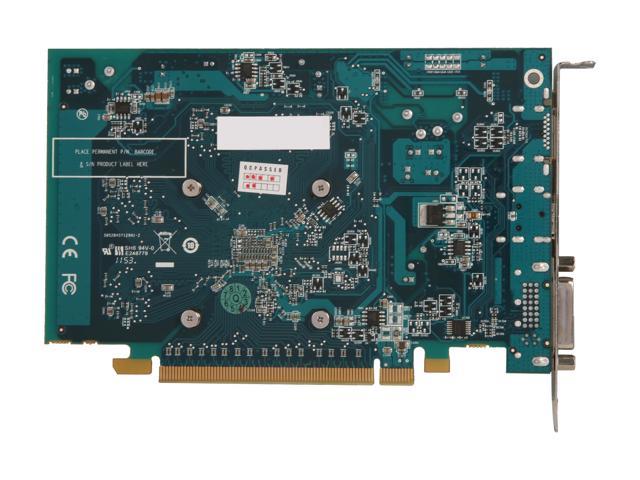 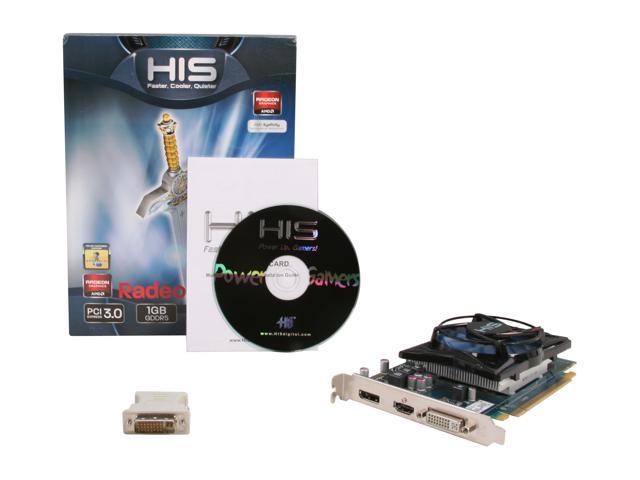 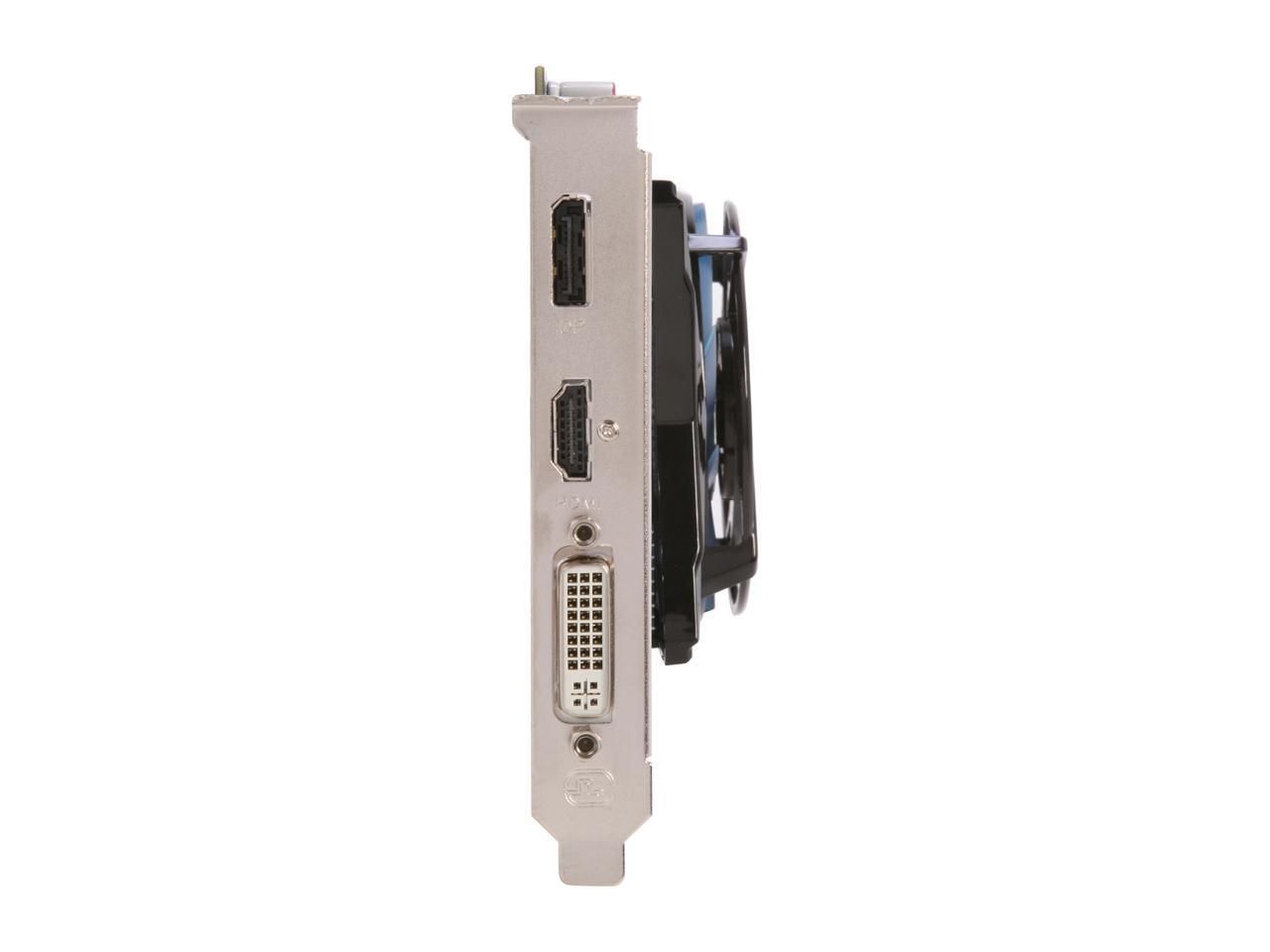 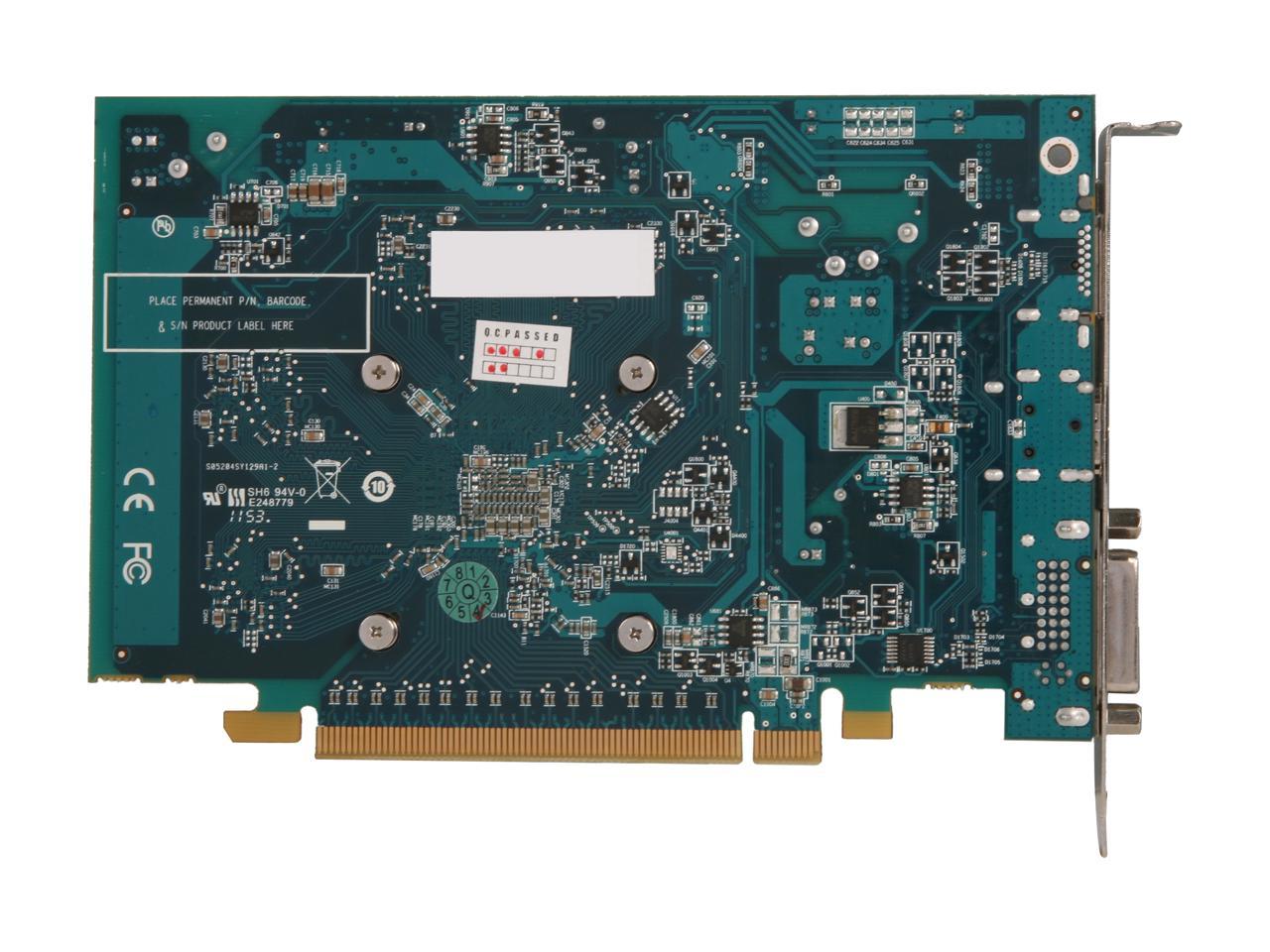 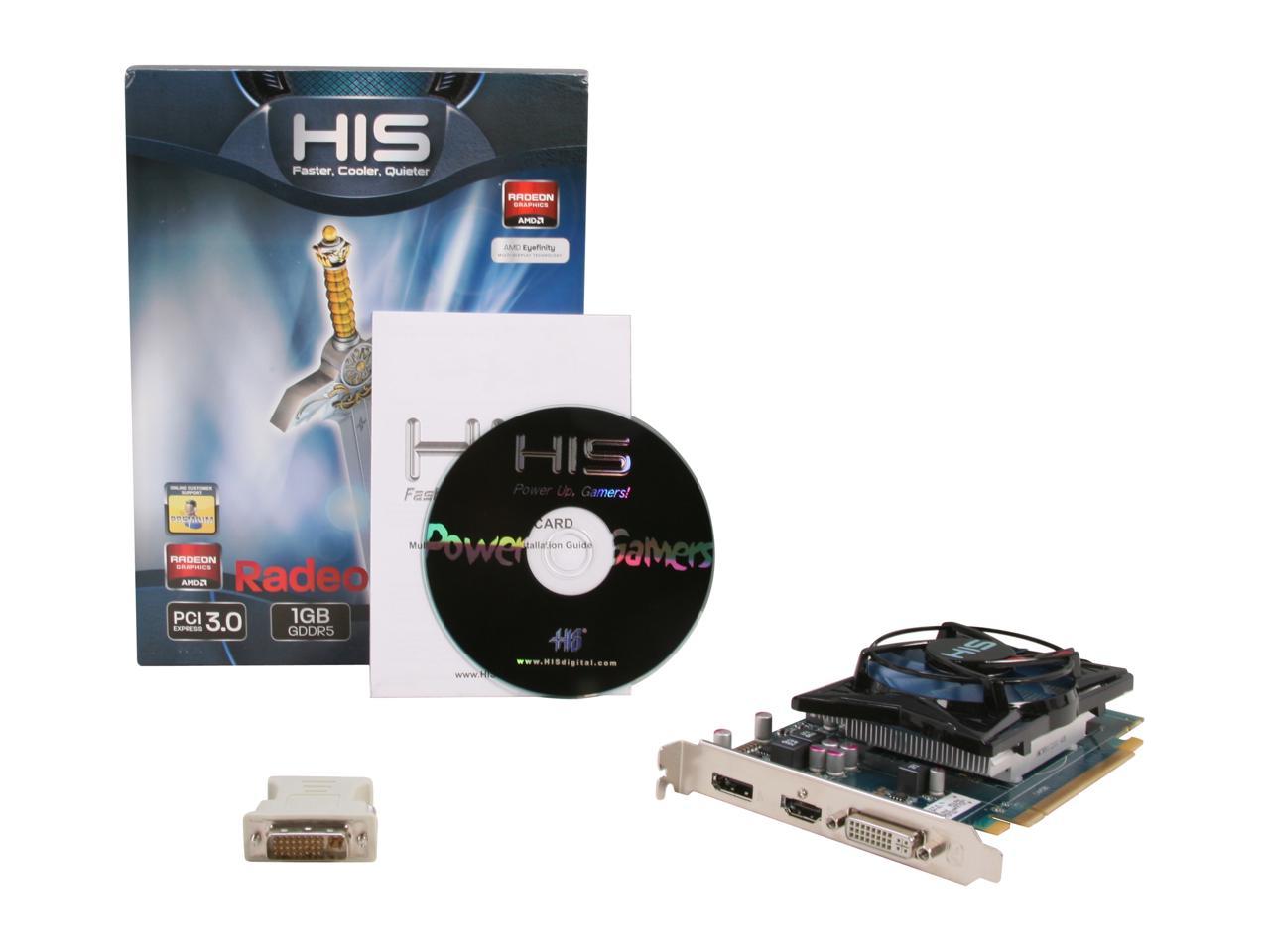 (60) Write a Review
OUT OF STOCK.
Overview
Specs
Reviews

The HIS H775F1GD delivers competitive graphics performances at excellent value, targeting at mid-range users seeking a high performance to price ratio choice among the latest 7K models. With HIS iCooler equipped, the card offers excellent all-rounded performances for games, movies, photo editing and other daily tasks while remaining quiet and cool. The card’s another great feature is the low power consumption. The card does not require external power and is a great card for upgrading your system without worries on needing a new PSU.

Based on the award-winning GCN Architecture, AMD Radeon HD 7750 is built to destroy with the industry’s very first 28nm GPU design. Packed with incredible features, such as PCI Express 3.0, the ultra-efficient AMD ZeroCore Power technology or gaming at resolutions beyond 5760x1080 with AMD Eyefinity technology, AMD Radeon HD7750 is the world’s most advanced graphics for everyone. In addition, with AMD PowerPlay & AMD PowerTune technologies, you can optimize the balance between performance and power consumption of your system by adjusting the engine clock during runtime of the card. Manage the power and keep your wallet loaded!

Pros: first im not a gamer so my review goes more to people on the HTPC camp the pros: +does not put too much extra heat inside your case +does not add too much noise to your case either +Super fast card to handle any HD file out there with ease +direct-x 11.1>hdmi 1.4>audio 7.1>and so much more

Overall Review: i use the cd driver and install catalyst 12.3 i was thinking that i was installing an old driver but after cheking the site find out that i was using the latest driver.

Pros: I have an hp desktop and so I need a smaller card to fit inside of it and this one fit great. All my games ran really well, which I was having problems with with my 6670. It brought up my windows graphics score from a 6.8 to a 7.4. For the improvement I've seen the $100 for this card was completly worth it.

Overall Review: This card made me really happy :)

Pros: Quiet. Cool. No External Power! Runs faster than the 5750 it (finally) replaced, and runs games at very beautiful settings - in fact, it completely maxes out L4D2 with no slowdown to be seen - at 1080p, no less. Old games are probably cake to this card. I'm not an avid PC gamer, but I appreciate the fact that this card is quieter than my old card, smaller than my old card (fits in my Apevia desktop case like a dream) and visually, things seem a bit zipper in Windows 7. The only complaints I had were...

Cons: Install the drivers on the CD! The current preview drivers on AMD's website gave me random black screen reboots due to problems resetting the display driver and recovering from a failed timeout. (Problem with atikmpag.sys) However, the drivers on the CD resolved this issue (Radeon 12.1), since I figured HIS wouldn't send out a card that couldn't be used. :P Totally thankful it worked fine too, as I was hoping I wouldn't have to return it. Been running fine since. Had a few problems with the HDMI audio out too, but the CD drivers seemed to fix that issue too. Guess that's the breaks of being an early adopter of new hardware - there may still be some bugs to iron out.

Overall Review: I wish the 7770 PCBs were shorter! I'd rather have that card, but the 7750 ticked off too many good things for me - price, power consumption, length, and my love of all things HTPC. I'm not a power gamer, so why get a card that's beyond my needs? But if ever I want more performance, I can crossfire this with another 5750 and double it since it scales VERY well. I might finally play with Crossfire with this card. Can't wait to see what Folding on this card would be like with the new GCN architecture too. Still, barring the issues I had, I still recommend this card, especially if you're coming from a 6600 or even the 5750 like me. The whole thing is only about 7" long.

Pros: Impressive GCN Architecture Very power efficient(55W TDP) at stock Mem Clk in desktop mode (.850V single monitor, .950V dual monitor, .1.100V dual monitor with overclock or performance mode.) Low thermal footprint. I run fan at 50% and it stays at 40C unless im gaming at which I run it at 100% and it never gets above 55C Impressive gaming, HD streaming and editing, GPGPU. When paired with Phenom II 965 I very decent fps in Dirt 3, Battlefield 3, MW3, Dirt Showdown, Flight Sim X and Microsoft Flight. As for every other task, I wait for nothing. Adobe CS6 and Media Espresso work great. Since CCC 12.4 I have seen increase in performance over early releases.

Cons: Only 1 con worth mention, but a big one. After the initial purchase I constantly had BSOD (over 75 times within 45 days) with "atikmpag.sys" crashing constantly, leading to me destroying a perfectly good keyboard and monitor. I EVENTUALLY, after a LOT of work and frustration, fixed the issue in BIOS by switching the Link ASPM setting to "L1 only" in my video settings. Although I was able to fix that issue I still listed as a con because: 1. Not all people may have this setting on ther MB. 2. This is an ENORMOUS engineering oversight(whether architecturally, or software) by AMD. This problem has something to do with the power saving tech "AMD ZeroCore". IDK if it is Zerocore alone, or ZC+PCIE 3 compatability on a PCIE 2 board. Whatever the unfortunate root cause I feel this is a MAJOR failure by the AMD R&D and QA teams, for what I feel to be an Iceberg of a mistake to miss during the prototyping process. I believe this is why all the 7000 series have 4 stars or less!=.

Overall Review: I personally like the card. The architecture has a great theoretical design and seems to prove it. It has all the features of the Flagship card with down scaled performance of course. It has enough power to get you decent fps on most modern games at generous detail level. I do sometimes experience short bursts of stutering on Dirt 3 though not major. The hardware acceleration works acceptional with all software I have that utilizes that feature, although I have not been able to test out F&H on it yet. I highly recommend for low/mid gaming and HTPC with CAUTION though. Make sure you have a newer board with ability to change PCIE power saving features. Good Luck

Cons: After a month the first cost lost the red colors and I RMA's it to HIS. 5 Weeks after the RMA, I received the replacement TODAY. After 15 minutes of usage the screen goes black. After it cools it comes back on for 15 minutes and craps out again. This is the SECOND bad card.

Cons: 1. Technical support barely existent. You can't call these guys. Know this before you buy. 2. HIS website a confusing mess, mostly referring you to stock AMD docs. 3. My HDMI port doesn't work, no matter what kind of monitor I plug it into; tried different cables, natives, adapters, monitors, etc. Assuming it's defective.

Overall Review: Nice card, but don't expect any help at all from HIS, the best you can do is an email support ticket. I'll spend a few extra bucks for a card with some tech support next time.

Cons: It was hard to get the thing out of the packaging, the HIS box is built like a safe! But I guess that's a good thing in reality.

Overall Review: Almost broke my PCI-E slot when installing this card because the inside of my tower is awkwardly designed, making it difficult to install video cards. Luckily I got it to go in just right after some finagling. Really impressed at its performance. I couldn't even run The Witcher 2 before, now it just flies. It's amazing how far technology has come. Just five years ago a card like the Geforce 8800 Ultra was the best around, and not only did it cost a grand, but it ate up your electric bill too. Today, we have this little ol' 7750 putting out better performance than that behemoth could ever hope to imagine, and without needing an extra power connector! And in case you are wondering, the 7750 is about equal to the 4870, 5770, and 6770 in overall performance. Can't wait to test out something like Guild Wars 2 with this...

Cons: Inconsistent quality, 2 cards had issues, see below. Great if you get a good one, but is HIS sending defective cards to Newegg?

Overall Review: I got 2 of these from Newegg. First one worked great in my new gaming rig, excellent performance for the price; only I later discovered the HDMI port did not function so I had to RMA it back to HIS. They did send me a new one that has been great for 2 weeks so far. The 2nd one I bought for another rig, but it kept giving screen lock-ups, even when nearly idle. Tried it in the same newer PC that the 1st one was in, same thing. Seems like defective memory, so sent it back to Newegg for refund, as 2 for 2 were bad, so have to wonder what % of these cards have issues. I hope my replacement holds up, I do like it.