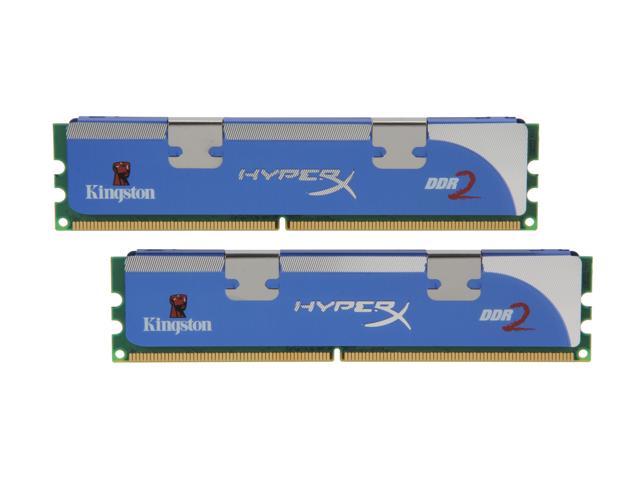 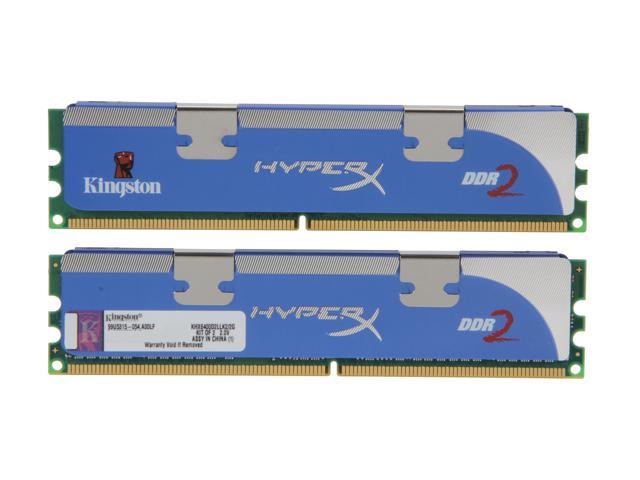 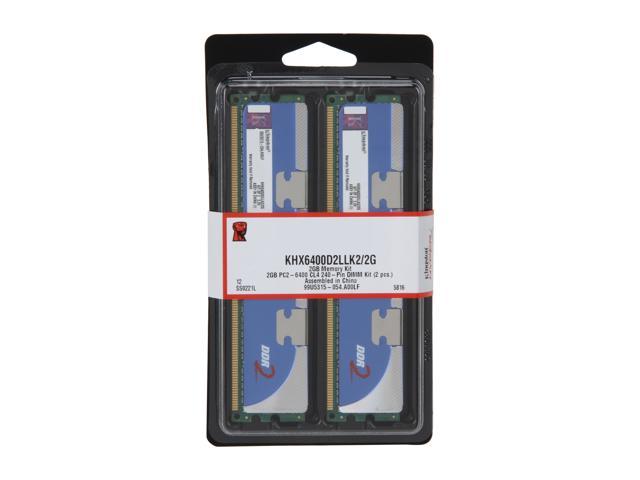 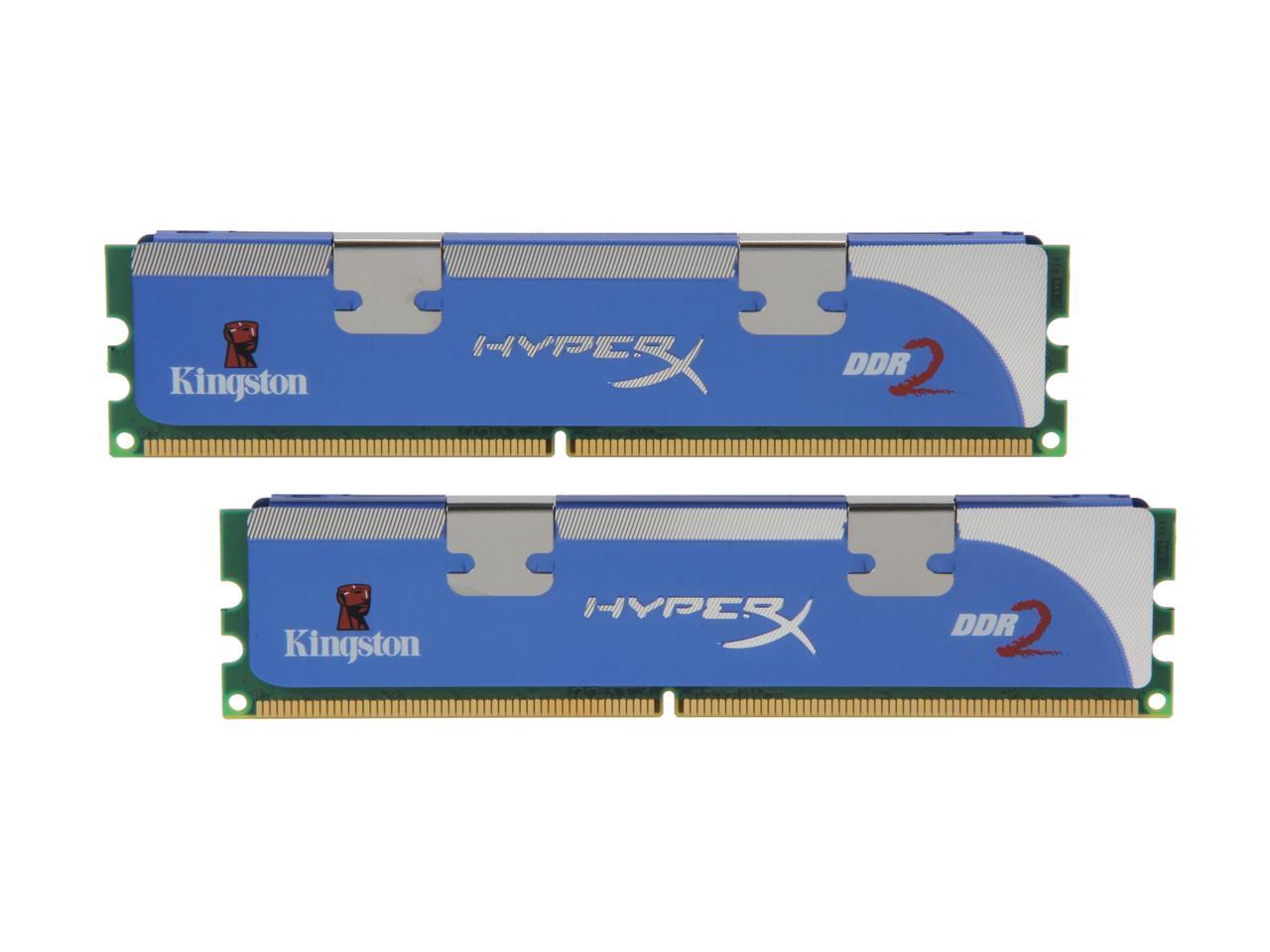 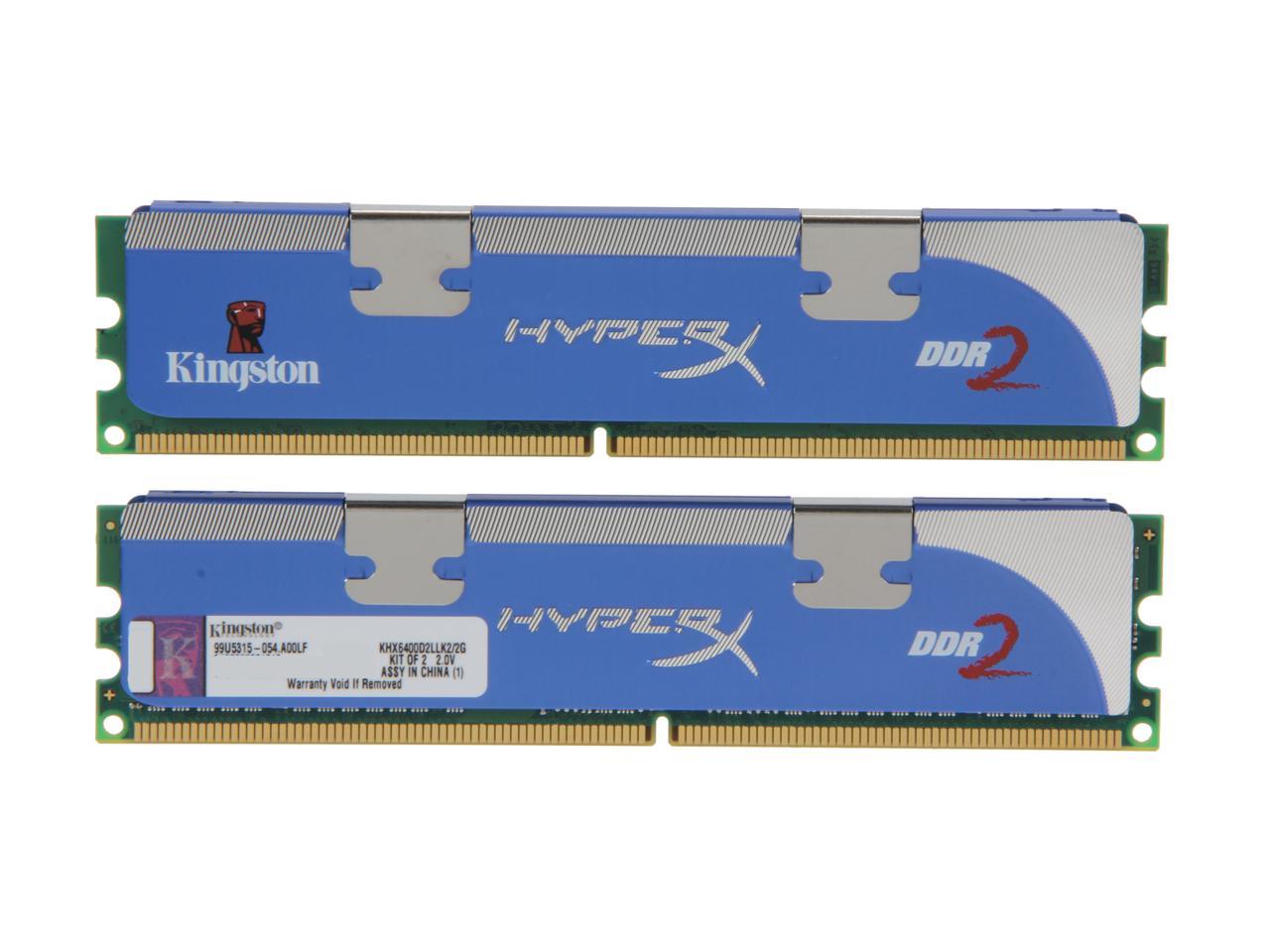 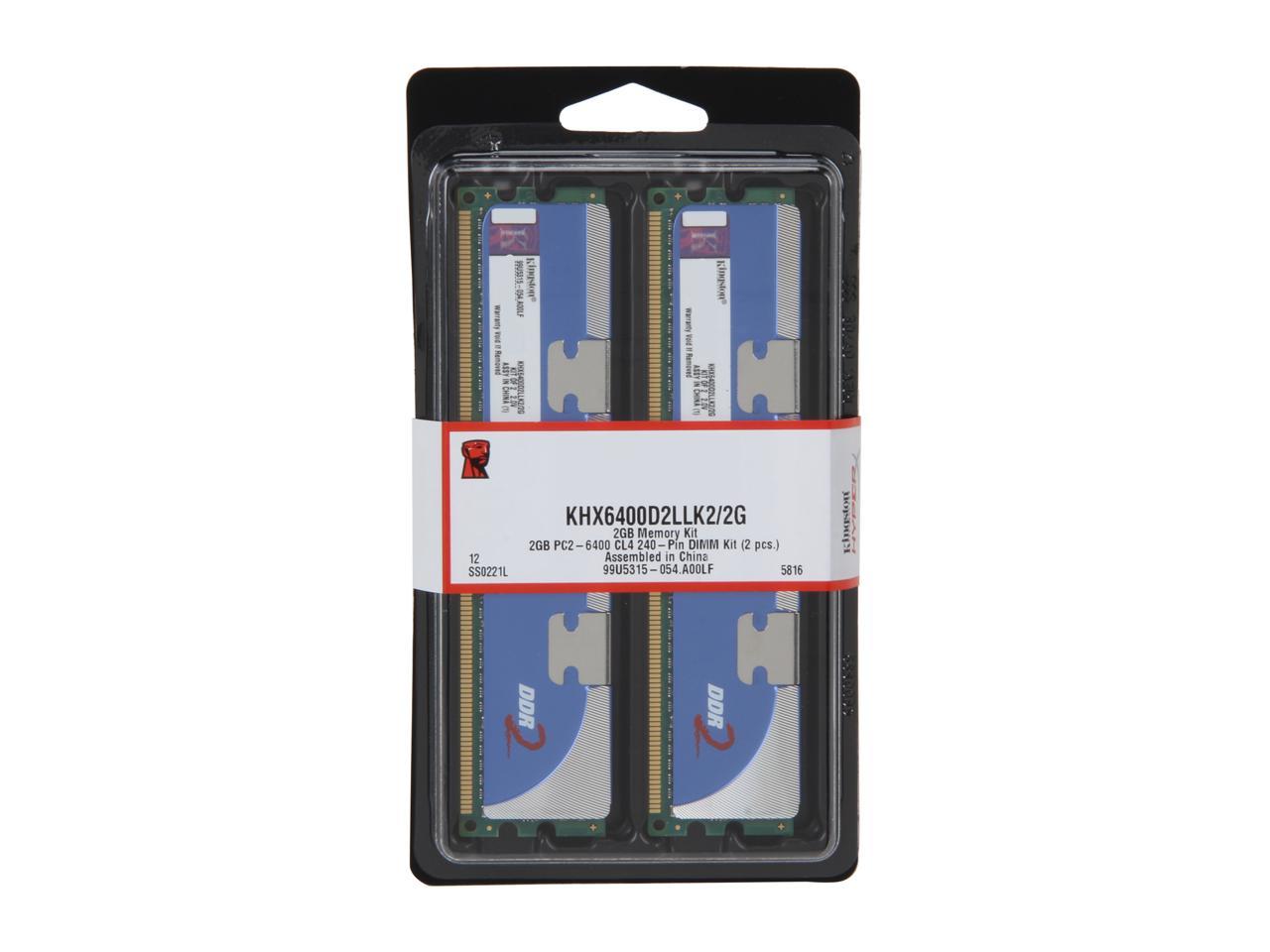 (116) Write a Review
OUT OF STOCK.
Overview
Specs
Reviews
Kingston’s HyperX PC2-6400LL/N Memory is ready, willing and able to take your most intensive data streams and juggle them with ease. Hitting its impressive 4-4-4-12 latencies at an overclocked 921MHz, this memory showcases Kingston’s ability to make absolutely screaming memory that’s reliable to a fault. The sticks are going to help your system break all previous performance barriers, even at stock speeds of 800MHz.
Clad in blue aluminum the heat spreader works with particular efficiency. The engineers at Kingston have worked diligently to improve their performance numbers, and it’s obviously worked.

Learn more about the HyperX KHX6400D2LLK2/2G

Pros: I recently bought an ASUS P5WD2-Premium and also bought some "not so great" GSKILL memory to go along with it. I figured it would work a-ok or at least good enough to work correctly. Needless to say, it didn't work. I bought this Memory and let me tell you, its worth every penny! (of course my company bought it for me ;) so price wasn't so bad )

Pros: Flawlessly passed a full run of memtest86+ and a 6 hour mersenne torture test with no errors or hangups @ 800 Mhz 4-4-4-12 timings. Kingston always makes the best, most stable, compatible RAM on the market.

Cons: None for me. I'm probably getting a couple more sticks.

Overall Review: Guys you really need to stop leaving bad reviews and complaining about false advertising. The data sheet specifically says: "Each module pair has been tested to run at DDR2 800 Mhz at low latency timings of 4-4-4-12 at 2.0V. The SPD is programmed to JEDEC standard latency 667 Mhz timing of 5-5-5-15 at 1.8V." Meaning you have to manually change the timings and voltage or it will default to 667 Mhz and a CAS latency of 5. Please learn what you pay for!

Pros: ...get these! I installed them and they booted right up in a BFGRAN590S motherboard (Socket AM2). It was easy to overclock the modules DDR2 800 & change timings to 4-4-4-12 (1T) at 2.0v. Running stable as a rock for over two weeks now. I ran Memtest 86+ overnight through 21 passes without any errors. I also like the fact that Kingston has detailed spec sheets available on their website. (Most other providers only give basic information or useless marketing flash.) Nice blue heatspreaders if that stuff is important to you.

Cons: You have to overclock to get to DDR2 800 speeds. No big deal if you have the right motherboard. Afterwards, BIOS recognizes it as PC2 6400, but CPU-Z still sees it as PC2 5300. (Must be due to the SPD programming on the chips.)

Overall Review: I didn't have any DDR2 sticks lying around so I wanted to make sure I had good memory right from the start. I had some minor issues recently with C*rs*ir and apparently others have also. O*C'Z seems to be having quality issues as well. There's a reason Kingston can keep their chip prices significantly higher than the competition--quality.

Cons: Only one con, most motherboards wont automatically set the 4-4-4-12 timings, so you have to set the timings manually in the bios.

Overall Review: Overall this RAM is some of the best around.

Pros: Fast! Stable! Looks nice in the case it's in with two blue LED fans. Heat spreaders keep it quite cool.

Cons: None so far! 8 hours of Memtest86 and no problems.

Pros: I've had this in my first home build computer since May 2007 and it works flawlessly

Overall Review: running 4x4x4x12 1.95volts and it's very stable with no issues - make sure you have the ability to change timing / voltage in your BIOS if you want to get the full advantage of this memory

Pros: Great ram, all the crashing to desktop issues i had in vista with source games with cxxxxxr ram have been fixed. Frame rates in 1 benchmark have increased 10 fps compared to the last ram I had.

Cons: only gets 5.6 in the Windows Vista Experience index score, though this hardly matters.

Overall Review: This is really reliable ram, and it worked flawlessly out of the box. I am buying another 2 gb soon.