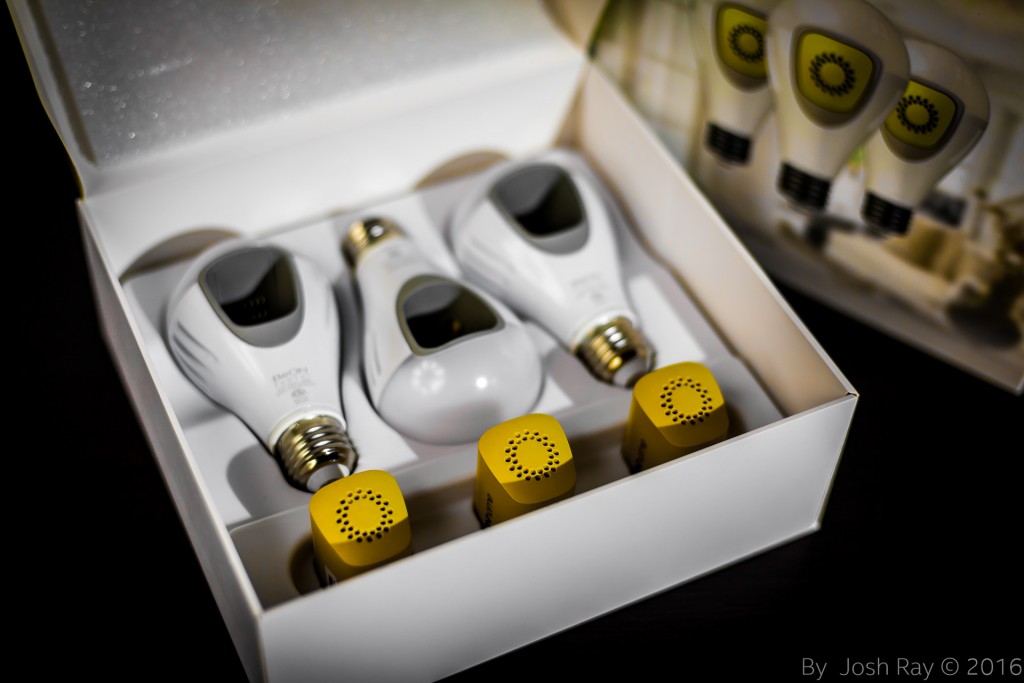 I was browsing Newegg for some smart energy upgrades & LED bulbs the other day, and stumbled across a new lighting kit from BeON Home. So I pulled a few strings and had one sent over to check it out. I don’t know about anyone else out there, but I am tired of the “smart” tag being applied to everything just to cash in on the buzz. Simply having two devices communicate does not make them smart – garage door remotes have been doing it for decades and nobody makes a fuss about them. Suffice it to say, I wasn’t ready to be impressed.

What makes these so smart? 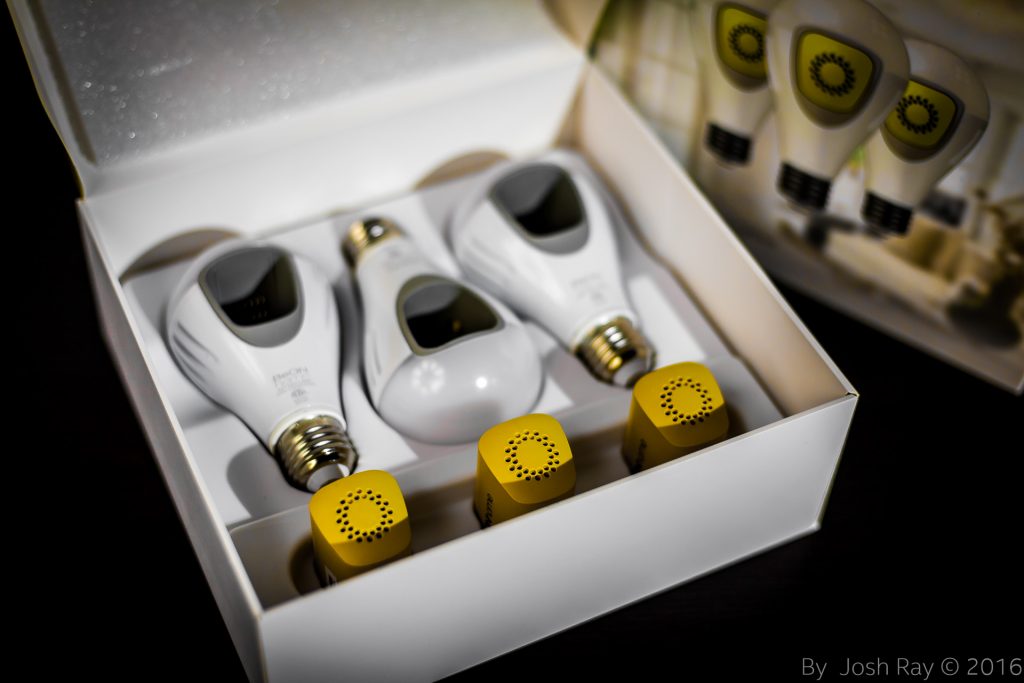 I screwed in the three bulbs, downloaded the app, and started playing with turning the lights on and off – like I was always told not to. Except this time, I was sitting on the couch and dimming the bulbs from across the room. Okay, that’s pretty impressive. But I was still not sold, so I kept playing around and found the “security lighting” section. This is basically a scheduled timer for all the lights, so you can make your home look occupied even when you’re gone.

I usually use one of those programmable plug timers on a lamp when I am on vacation, and it is pretty predictable – on at 6pm, off at 11pm. BeOn’s scheduling feature takes a more realistic approach, cycling through the different lights during the course of the time the function is engaged. So, maybe I have the living room light on for a few hours, then the kitchen light, then both, and then none. Even cooler, I discovered that the bulbs can learn the pattern of regular use, and replay them to give a very real impression of your normal routine. 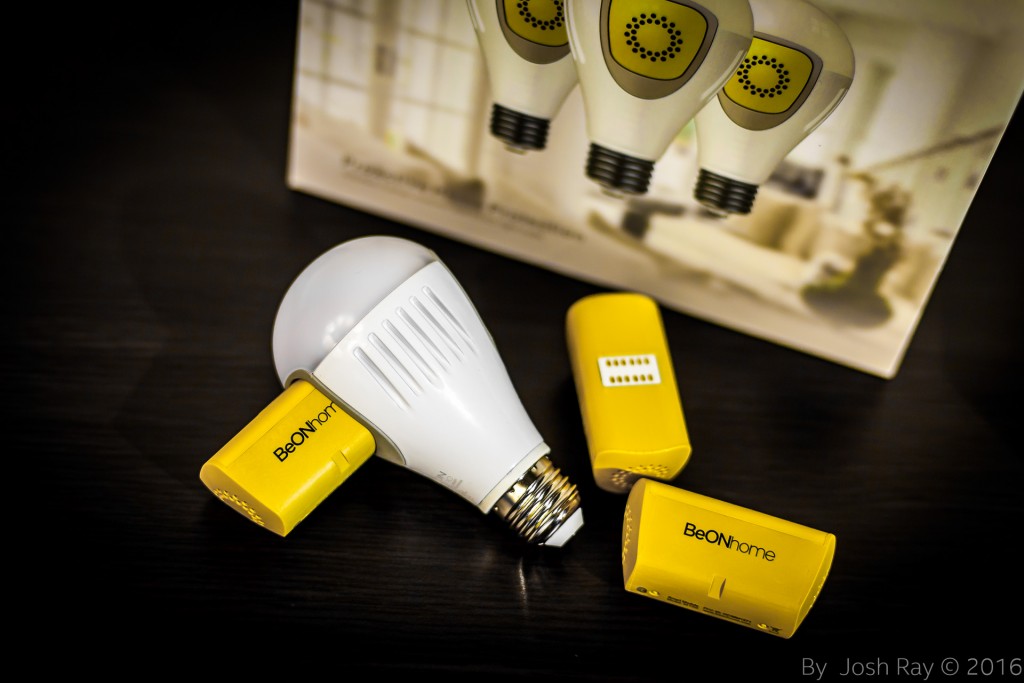 Beyond home security, BeON bulbs can keep you safe in other ways. They communicate via Bluetooth with one another to react to certain changes in your home environment. One safety feature that BeON built in is for the system to automatically turn on if the smoke alarm or carbon monoxide alarm goes off, and if one bulb is triggered then they all light up. I tested this out with the smoke alarm, and it actually works pretty well (and also sends an alert to the app in case you aren’t home). While the bulbs themselves don’t have a particle detector, they do have speakers that are used for a couple of functions.

Another mode responds to the sound of the doorbell when activated, which turns on lights in a pattern to simulate someone making their way through the house on the way to answer the door. This is designed to counter the doorbell test, where potential robbers ring the doorbell to make sure nobody is home before breaking in. So I threw on my black ski mask, turned on the app, and attempted to break into my house using the doorbell test – the lights flipped on and my attempt was thwarted.

The little yellow module you see is really the brains of the whole operation, serving as the communication center, controller, microphone, and battery backup. When the bulbs are on AC power, the batteries are constantly charging, giving you up to four hours of light per bulb on battery backup when needed. This is pretty neat, because if you have a power outage you can still have lighting throughout your home and adjust the brightness to extend battery life where you need it most.

Another slick aspect of the battery backup is being able to unscrew the bulb and use it as a flashlight. While not too practical under normal circumstances, if you don’t have an emergency flashlight with fresh batteries it can help illuminate whatever you might need it for. Once the power comes back on, the batteries will recharge until needed again. 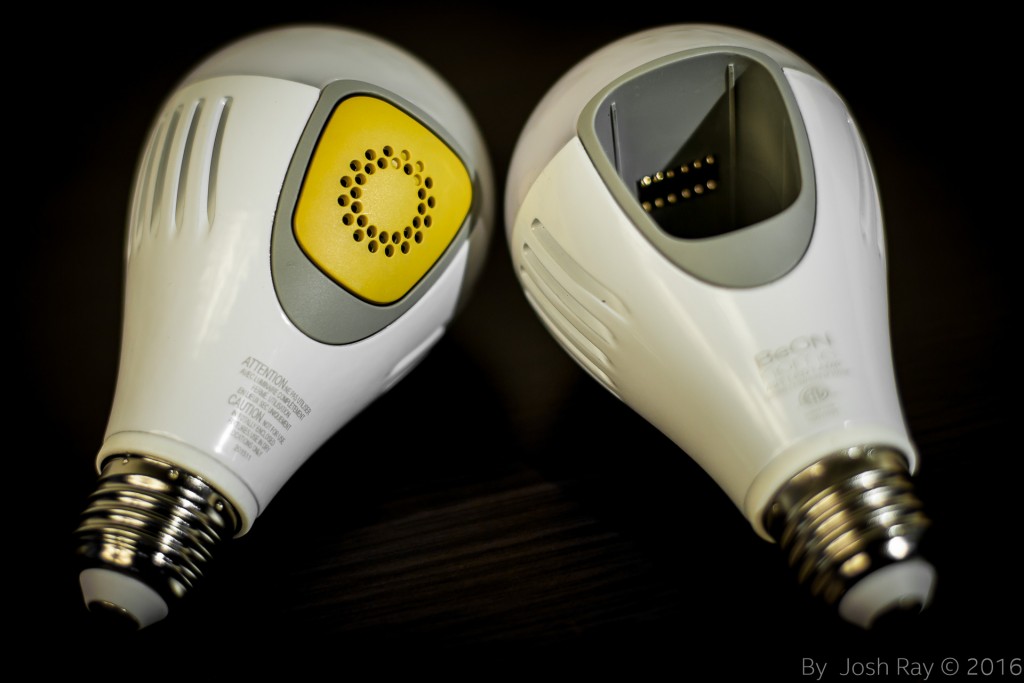 The initial price you pay for one of their three-bulb kits at $199 is a hefty investment, there’s no way around it. But BeON rates their 60W equivalent bulbs for a 22-year lifespan, so when you actually do the math you are in the neighborhood of 75¢ per bulb every 3 months, and you start to see the long-term value. That isn’t bad in my book, since you also get the security features, customization, and emergency backup that normal bulbs don’t offer. The main modules can be swapped out to future-proof the system if there is upgraded hardware down the line, and individual bulbs can be added on to the system quite easily.

As someone looking to get into home automation and have more control with a little extra security, these bulbs have definitely impressed me and earned their “smart” tag. For a beginner upgrade, these are an easy way to dip your toes into the connected-home waters without making any major modifications and still experience the benefits.