Your Smartphone Can Now Warn You About Earthquakes

By Jason BlandfordNovember 29, 2014No Comments

There’s an app for that, too? There will be! Smartphones will soon provide another lifesaving service – an app for those in earthquake-prone areas of the world that alerts users of seismic activity up to 30 seconds before they feel it. That’s really good news for us here in Southern California, where journalist Allison Barrie says “more than 16 million smartphones can be harnessed to provide residents with direct warning” in an article titled “How smartphone warnings could save lives in an earthquake.” But eventually it could make the difference needed to save lives anywhere. (Earthquake Early Warning Basics image is used courtesy of OC Register.) 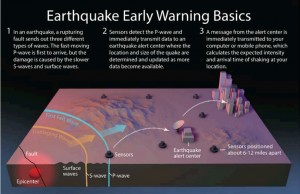 Researchers have joined forces to provide the technical hardware and crucial data to send dire, area-specific alerts that aim to minimize injuries, deaths, and property damage of all kinds. The United States Geological Survey (USGS) is partnering with others to create an app called “ShakeAlert,” and a company called Early Warning Labs is developing another called “QuakeAlert.” A technical report released a few months ago details this more fully. ShakeAlert* already proved its mettle recently with quakes in Northern California’s wine country this summer, sending an early warning to researchers up to 10 seconds ahead of the quake’s seismic wave in some areas.

How the Apps Work

According to a report released May 12 of this year, USGS’s purpose for the app alert system, is

to identify and characterize an earthquake a few seconds after it begins, calculate the likely intensity of ground shaking that will result, and deliver warnings to people and infrastructure in harm’s way.

The report goes on to specify the two different types of waves emitted by earthquakes: P-waves and S-waves. The “P” is for primary – these waves travel at high speeds in all directions away from the epicenter. These waves do not cause the majority of the damage, however – that is what the S-waves do. S-waves, or secondary waves, carry the bulk of the energy from a quake, and, therefore, the destructive power.

The good news here is that most of the technology is presently available. Existing “Ground-Motion Data Sources,” as well as new stations to be built, receive the first impulses from quakes – the P-waves. With initial detection, the stations send signals to Earthquake alert centers. Algorithms, obtained from the various signal centers, calculate the intensity and direction of the seismic waves, which move about 2 miles (3.5km) an hour. These alert centers currently send messages to first-responders and emergency agencies, but will be equipped to one day send that data right to the Smartphone in your pocket or to an app on your computer. You will know how soon to expect the shaking and how strong it will be when it hits.

What the System Requires 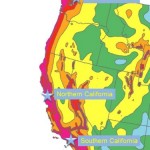 These “Ground-Motion Data Source” stations have been built near known fault lines, but as of now are not numerous enough to provide comprehensive detection and systematic, wide-scale notification. Furthermore, the applications have yet to be fully developed for the consumer. Unnecessary warnings, faulty information, and other bugs will naturally need to be ironed out before implementation. The USGS says a little over $38M is required to get things up and running, according to the report mentioned above, with subsequent maintenance running about $16M a year. Hopefully we will see this much-needed lifesaver on GooglePlay and the Apple App Store really soon.

The thumbnail above and to the left indicates common areas of seismic activity in the western states of America. Those of us in the pink and yellow areas see the most action and are most in need of preparation. The areas of green and blue are less threatened by temblors, but it’s always good to be prepared.

A 30-second alert time seems short, too. Your household pet can probably detect and alert you to tremors at that rate. However, considering the data we have, and from personal experience as a SoCal native, I don’t believe we can get more time than that. An ounce of prevention is worth a metric tonne of cure, as you know, so being prepared at all times is good advice, too. Check out some earthquake preparedness kits on Newegg’s website. Also, for California residents, check the California Earthquake Preparedness guides on our state government’s site for helpful info.

The image below details the current and future flow of information – from sensor to you! Solid lines indicate existing technology; dashed lines indicate future tech as detailed in the report mentioned above. 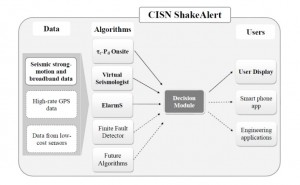 *Please note, ”shakealert” is also the name of an existing app created for the purposes of personal safety and is not related to the Earthquake Early Warning system mentioned here.