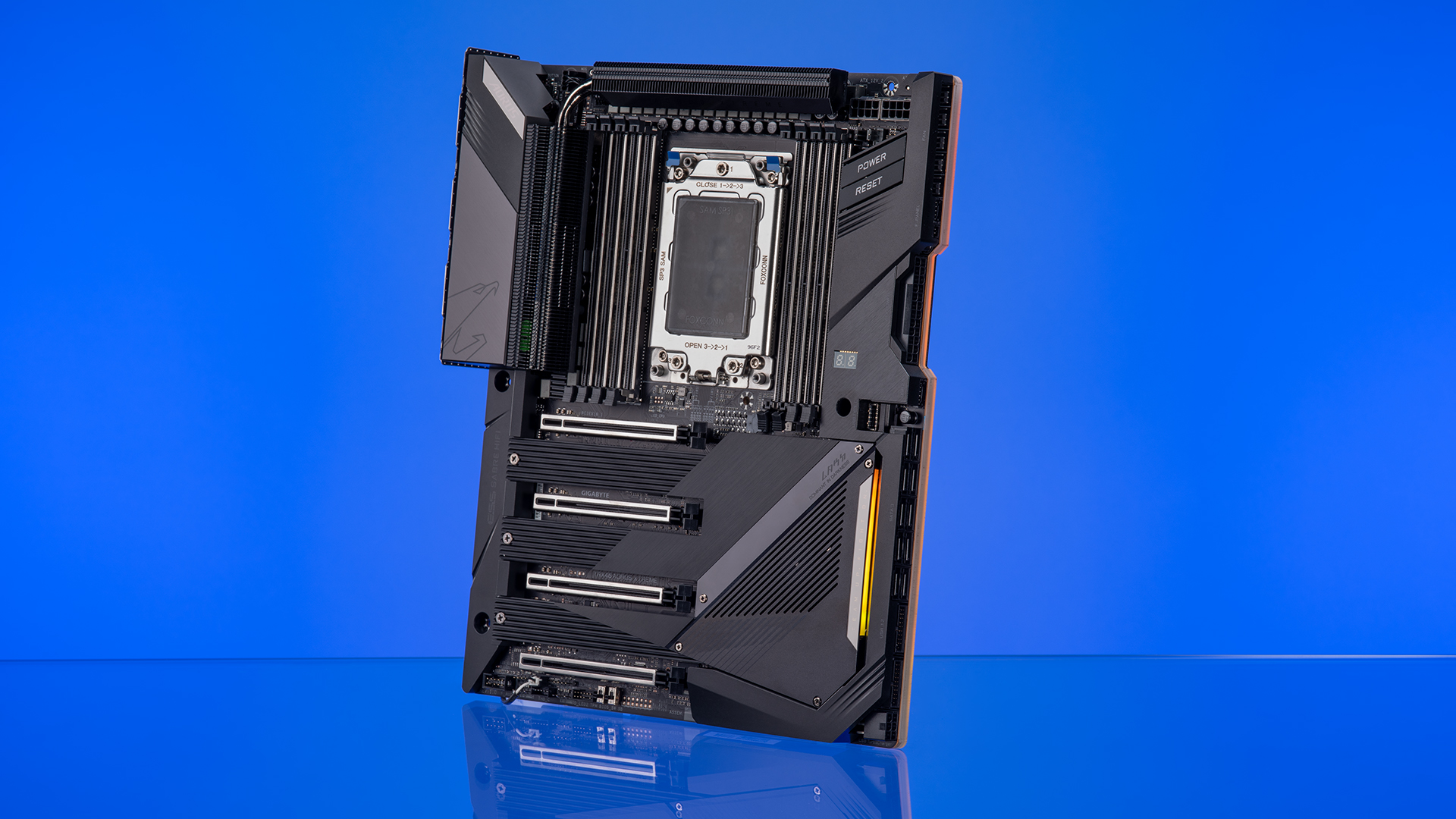 These new motherboards come equipped with the sTRX4 socket, which is a brand-new socket type. This means that the new Threadripper CPUs will be incompatible with the last generation sTR4 socket, unlike the Ryzen’s X570 motherboards, which use the same AM4 socket as the X470 boards.

While buying an entirely new motherboard might be a bummer for those looking to upgrade from a 2nd gen Threadripper to a new 3rd gen, your money certainly won’t be wasted. The upcoming line of TRX40 motherboards, announced shortly after the Threadripper reveal by various manufacturers, boasts some of the most impressive consumer-grade tech we’ve ever seen in motherboards.

The first of the new boards that we were able to get hands-on with here in the Newegg studio is the GIGABYTE TRX40 AORUS XTREME, and it’s the definition of overkill. But hey, that’s what the Threadripper is all about: Performing the highest end tasks a computer can perform, like intense 3d modeling, while providing way more than you need for everything else.

Threadripper: The next generation 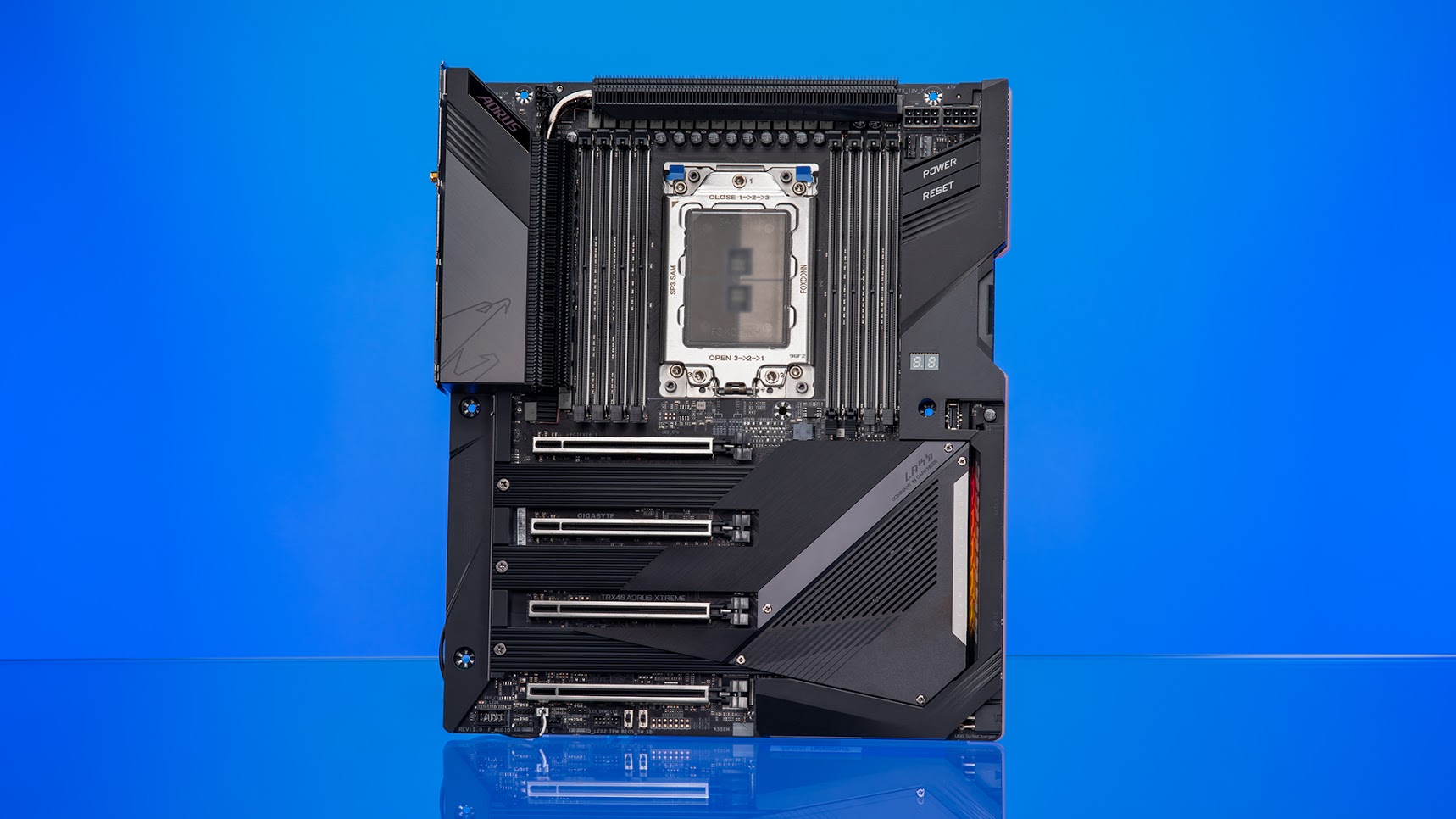 The perfect place to start with the TRX40 XTREME is its CPU socket, because that’s the whole reason this new line of motherboards exists to begin with. The sTRX4 socket fits two new Threadripper CPUs: The 3960X and the 3970X.

The “overkill” theme comes in first and foremost with these CPUs. Namely, it’s in their names (see what I did there?). The first Threadripper, the 3960X, comes loaded with 24 cores and 48 threads. 48 threads, man. And that’s the lower-end of the two chips. The second CPU, the 3970X, is the pinnacle of computing power, with 32 cores and 64 threads. Both chips actually have close to the same clock speed, with the former at a base clock of 3.8 GHz and the latter at 3.7 GHz. Yes, the 3970X has a slightly lower base clock, but keep in mind that it also has 32 cores. I don’t need an immensely high clock speed when there’s a core for each Google Chrome tab I have open at once (I don’t have a problem, you do). Both CPUs have a boost clock of 4.5 GHz and are, in fact, primed and ready for overclocking.

Cores and threads are always the most impressive bit to talk about first, especially with a CPU named after them, but the tech behind those cores is just as stellar. For example, it wouldn’t be a Threadripper without support for Quad Channel DDR4 RAM. We’ll talk about the RAM in a bit, though. These CPUs also have a massive cache (140 MB and 144 MB respectively), 88 PCI lanes, and a new architecture, Zen 2, which makes each core 15 percent more efficient than the previous generation, according to AMD. 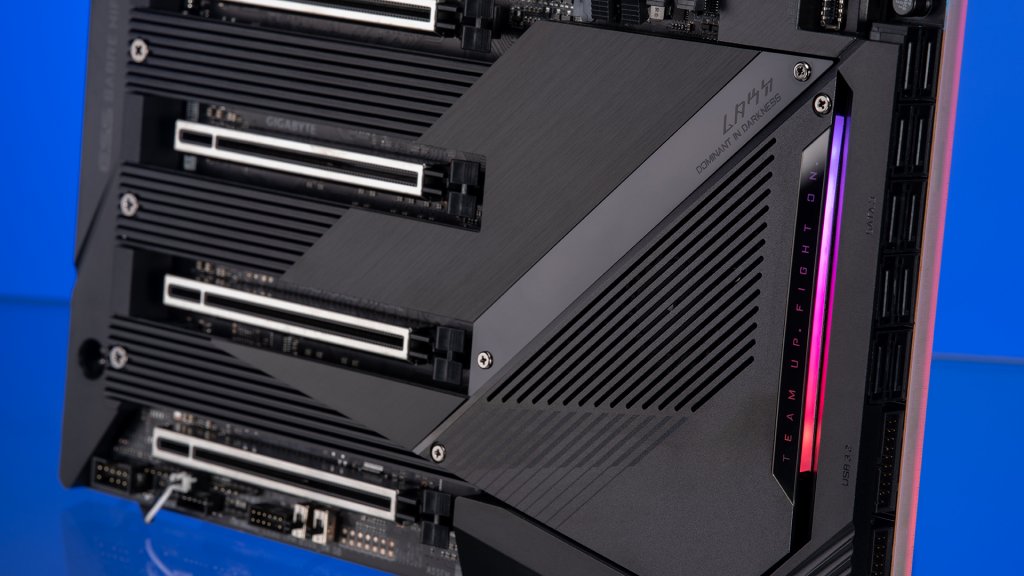 Starting at the top of the motherboard, there’s the RAM. Yes, the Threadripper supports Quad Channel memory. There are eight DIMMs on this motherboard, and they’re all unbuffered, which means the RAM is directly connected to the chipset controller rather than having to go through its own separate checks. This isn’t always possible on motherboards, because it means the RAM is constantly pumping all that it can into the system, which can really overload some things if you don’t have a ton of processing power available to, well, process it. The Threadripper doesn’t have that issue, so these motherboards, the XTREME included, don’t need the bottleneck.

More storage than you have room for 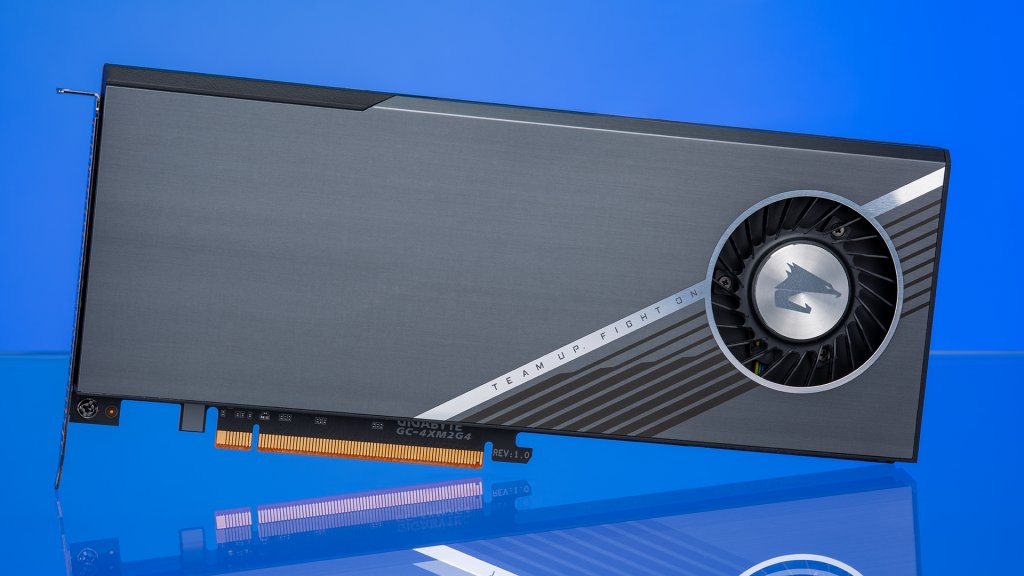 Working our way down, we have the PCIe and SATA ports. There are four full PCI slots on this motherboard, including three heatsink-covered M.2 slots in between them. On top of that, this beat of a motherboard comes with a full adapter with even more M.2 slots. The adapter plugs into a PCI slot and is self-cooled with its own fan system—perfect for RAID setups or just a ton of extra storage. Or, alternatively, you might feel more comfortable having your SSD cooled safely and without having to tuck it under a bulky GPU. There isn’t much to say about the SATA ports, other than that there’s a lot of them—10 to be exact.

Below the SATA ports, on the lower right side of the motherboard, there’s a small, separately powered slot called the USB turbocharger. You plug that into your power supply directly, and the motherboard then siphons that extra power into the motherboard’s USB slots, which means charging or powering any peripheral is going to go very, very well. As with most Threadripper builds, make sure you have a hefty power supply, though.

Back on the IO panel, the magic continues. Gold-plated high-end audio ports and high speed USB slots are only the tip of the iceberg. The real magic, or at least the feature back here that sticks out as particularly interesting, is the QFlash button. Pressing this button flashes and updates your motherboard’s BIOS, providing a much safer and faster means of keeping your system updated that won’t require digging around in the BIOS itself. 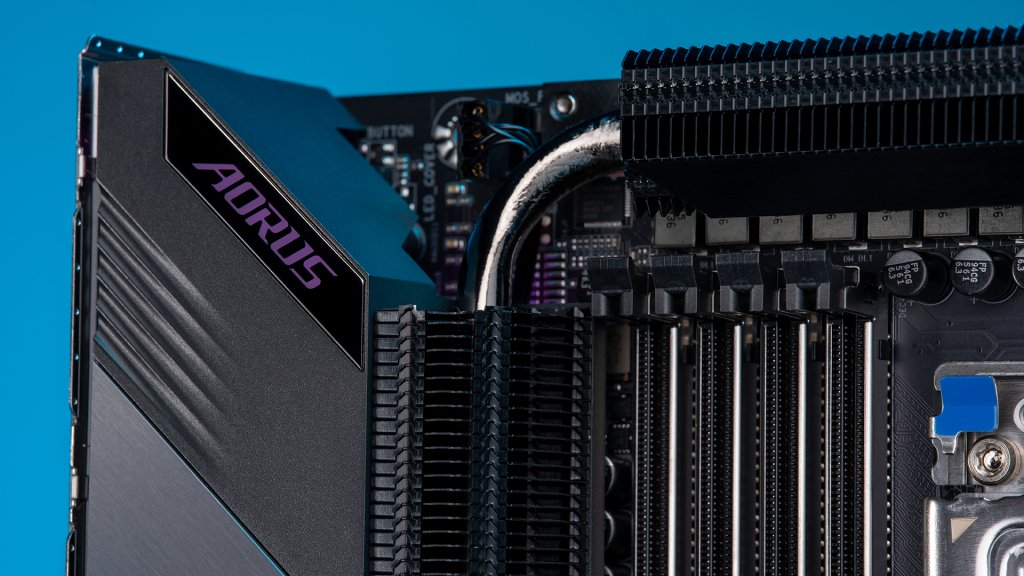 I know that’s not the quote, just roll with the punches. This TRX40 motherboard’s cooling system, just like most of AORUS’ products, is state of the art. The entire board is protected by cooling plates, which is worth every bit of extra bulk, despite the extra weight it adds. If you’re pumping as much power into this bad boy to run something like a 32-core Threadripper and a top notch GPU, you’re going to need extra cooling to keep things in order, and this motherboard handles that problem with aplomb.

The plating coating the entire board is called Thermal Reactive Armor, and it includes all of the special cooling hardware that’s packed underneath. The fins-array heatsink is standard nowadays on any enthusiast motherboard, but more than that, there’s what AORUS calls an 8mm Mega-Heatpipe, which is, appropriately, quite mega.

The fans underneath the massive carbon baseplate are supported by ball bearings, so they’re smooth and silent, and thermal conductivity pads, ensuring cool temperatures spread evenly across the entire board. Those temps are carried by the aforementioned Mega-Heatpipe, which would also be a great name for a band. Dibs on that, by the way. 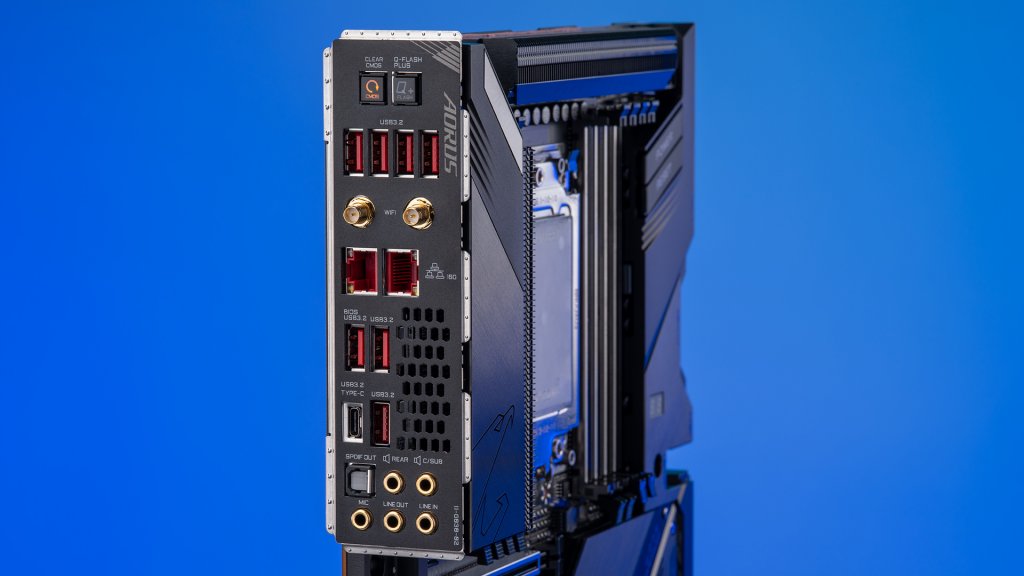 This motherboard is built for really, really high-end performance. 3D modeling, 4K video rendering, streaming games at 60fps or higher—it can do it all. It’s likely, then, that those needing that level of computing power expect their network to be able to handle the load placed on it by this rig. You might have gigabit internet or most likely even higher at home or work to support endeavors like this. Lucky for you, this motherboard comes equipped with top-of-the-line network support.

For hard-wiring, the LAN ports (that’s right, ports, as in plural, as in two) both support up to 10 GB connections. That’s… fast. But it doesn’t stop there. The Wifi ports on the IO panel, which come with their own external antenna, support Wifi 6 by default. In simple terms, Wifi 6 is the next generation of Wifi technology. Its technical name is 802.11ax, and it replaced the previous generation, 802.11ac. In other words, this motherboard is future-proofed for anything your ISP can throw at it for the next few years at least. 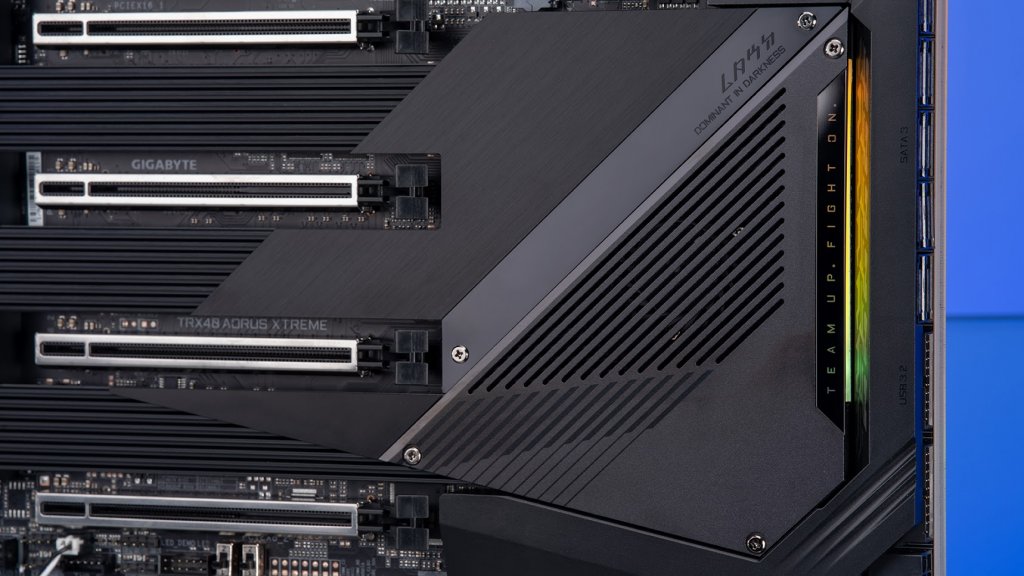 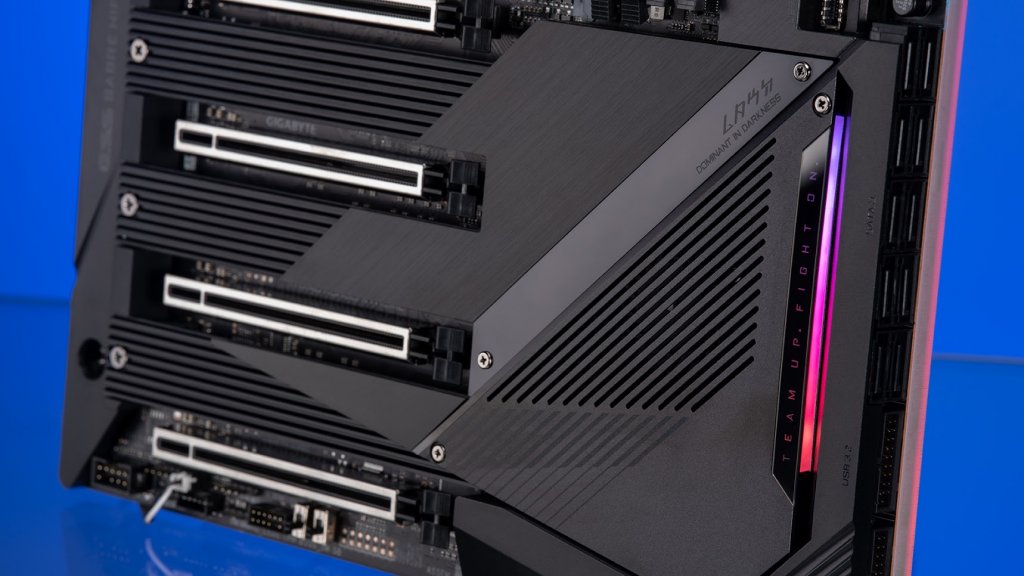 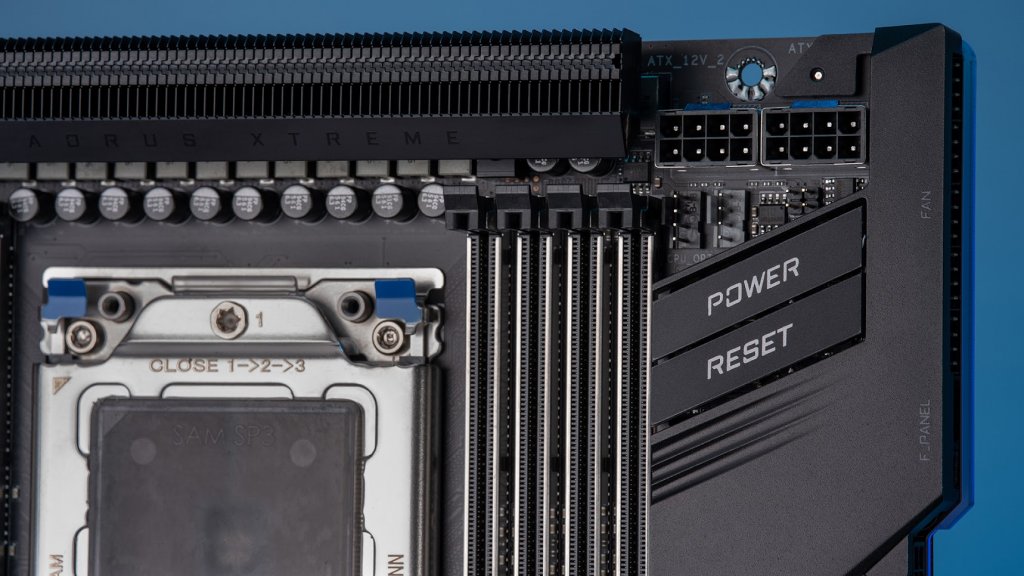 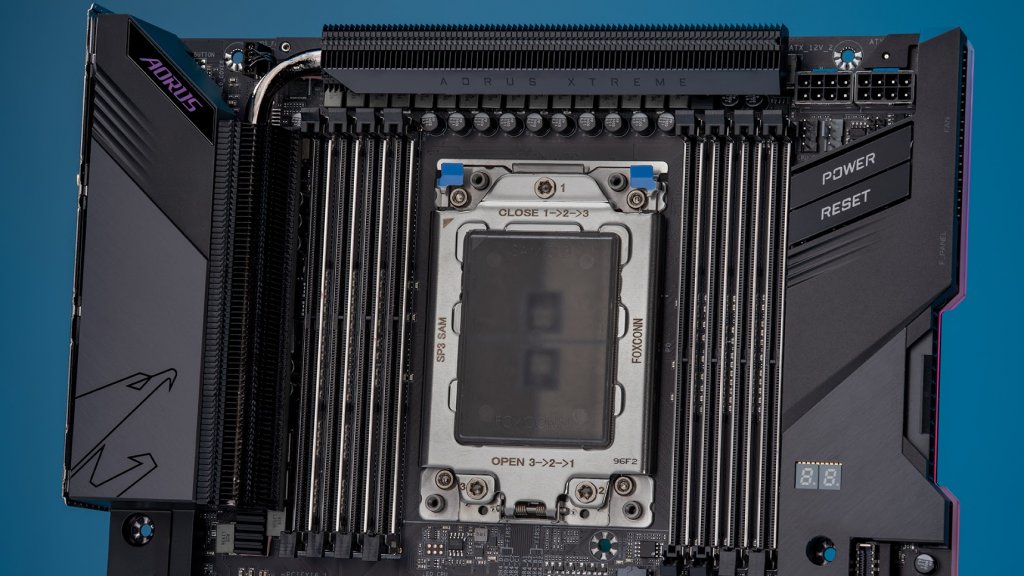 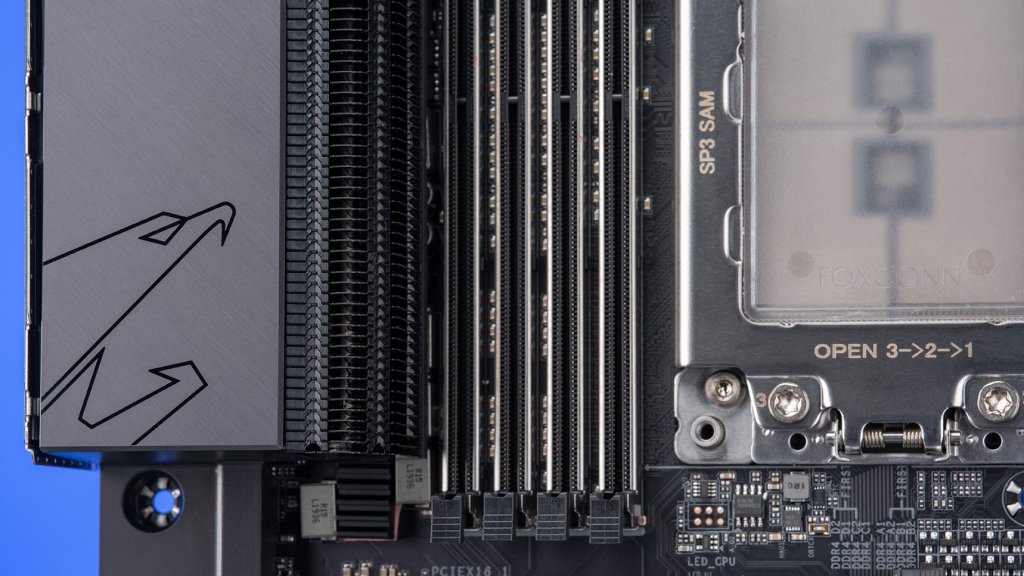 The TRX40 motherboard’s design is just as cutting edge as its hardware features. It has an RGB border, which stands out among other motherboards which typically just include the standard RGB highlights near the main heatsinks, which this motherboard also includes. The bright RGB border, paired with several RGB LED ports on the motherboard (including two addressable LED headers and two RGB headers), make for better RGB customization than even some enthusiasts are used to. The carbon baseplate, which is meant for cooling above all else, looks slick, too. It provides a very sleek metal finish to most of the board.

With how well this TRX40 motherboard performs, you’d expect it to look similarly stunning. If you want to pick up your own, you can on Newegg today, along with the 3rd gen AMD Threadripper CPU.