Master Art of Sound Headphones: From New York to Tokyo

By Gregory RiceDecember 21, 2017No Comments 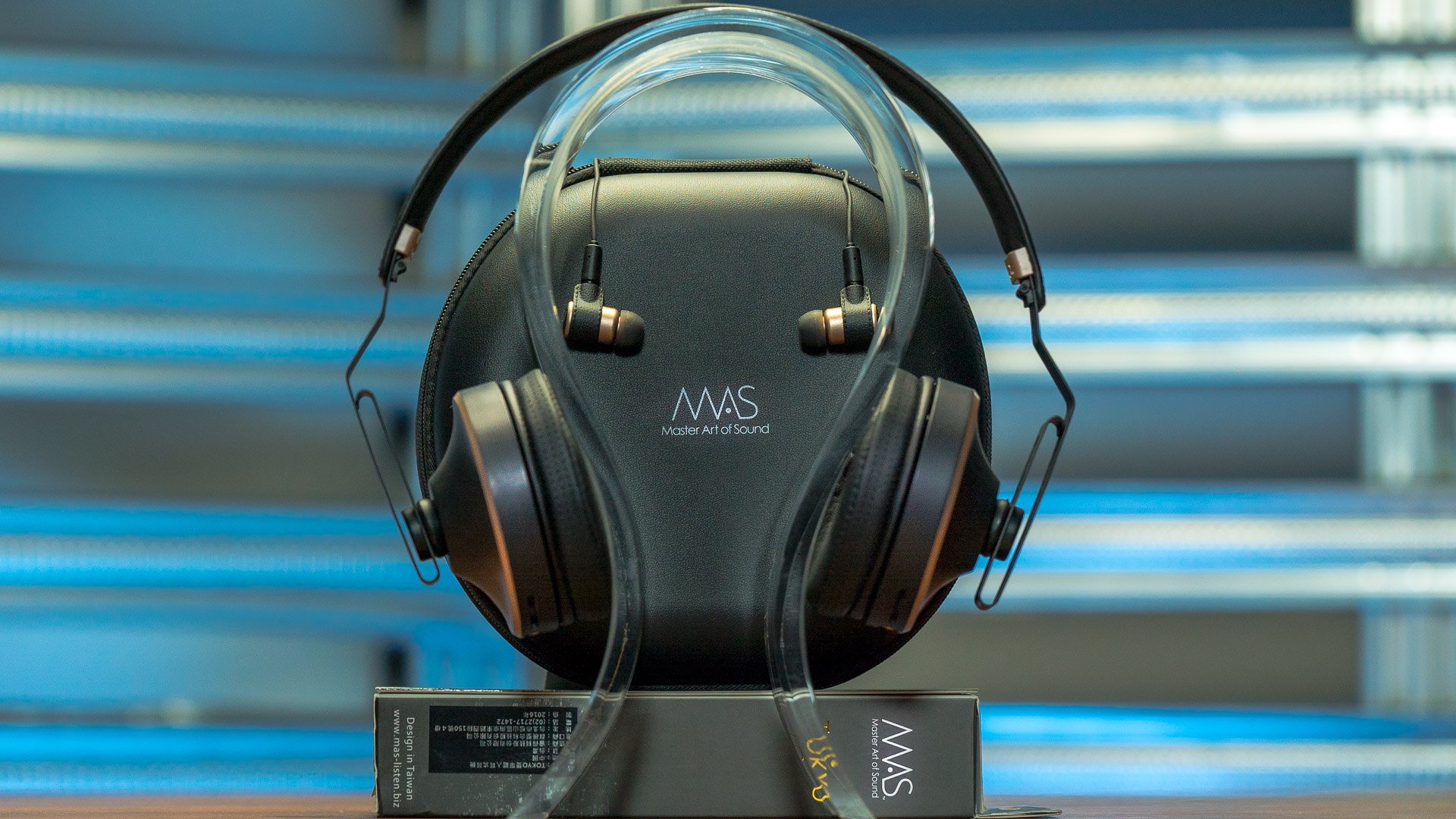 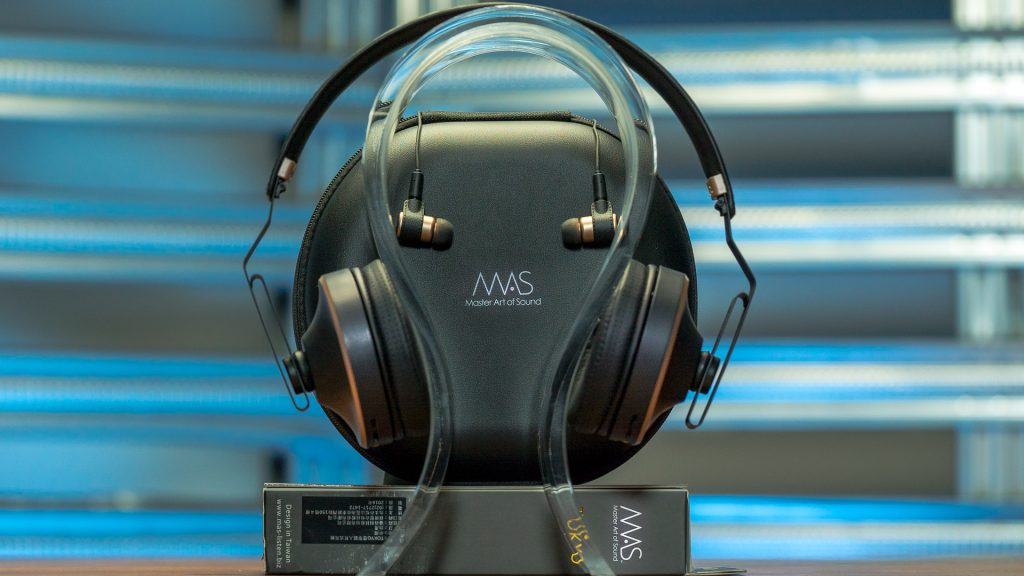 Master Art of Sound (MAS) is a newcomer to the headphone game, which means they have a lot of catching up to do. Hailing from Taiwan, MAS has simplicity in design aesthetics as their main ethos, and names each model after a major metropolitan hub. Their mission is to create headphones for the trendy urbanite, with a modern minimalist mindset. The Tokyo, New York, and Seattle are their three models to date, each with a different form and features.

Two interesting models from MAS include their Tokyo earbud headphones and the New York on-ear headphones. Do they have what it takes to make their case as a viable option over the established brands in the sub-$175 space? 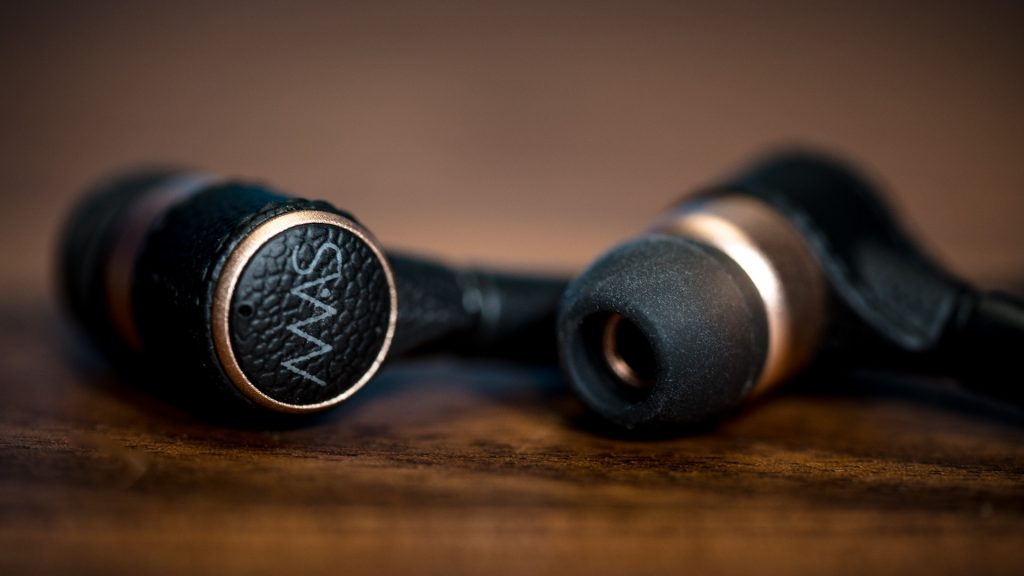 The Tokyo wired earbuds feature a rose gold-colored aluminum driver housing, with a contrasting black faux-leather print plastic molding, making for a clean two-toned theme. Magnetic backing on the in-ear bud housing keeps the two secured together when not in use, which can help avoid the rubberized plastic cables from getting tangled in a frustrating knot.

These came out to about 23g total, with over half that weight located in the earbuds themselves. The construction feels solid, which is due in part to the aluminum housing but also the wire connection at the base of the earbuds, which is a MMCX connector that allows for either wired or Bluetooth wireless earbud use, or upgrading to higher quality cables if desired. 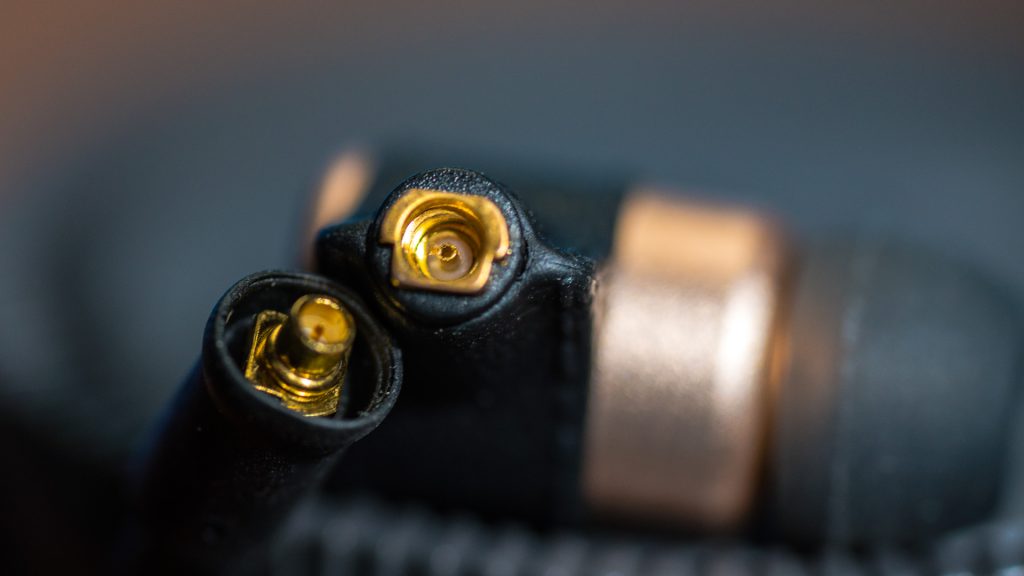 These little guys have dual-dynamic 6mm and 9mm drivers, with 16ohm impedance. The max sensitivity is 95dB, with a frequency response range of 8-40,000Hz and they are Hi-Res Audio compatible. But enough of the numbers, let’s get into how they actually sound.

The midrange notes are a good performer for these earbuds, with a strong offering throughout the range. Acoustic guitar sounds hearty, with all the subtle string movements carrying through nicely and delivering a true sound. Funk and jazz sound quite good, with rich and warm tones across various drums, horns, electric guitar, keyboard, and synthetic notes.

The treble notes aren’t overly pitchy or sharp, which is good considering the bass isn’t as strong. I was expecting that there would be less balance and thus skewed drastically towards the high end, but thankfully this wasn’t the case.

Since many people listen to podcasts or just like to hear vocal quality, I thought this was of importance to discuss. The transition between vocal pitches is smooth and rich. Reverberations from either natural or vocal effects maintain their tonal quality throughout a variety of testing materials, and I would say this is a very strong suit for these earbuds. 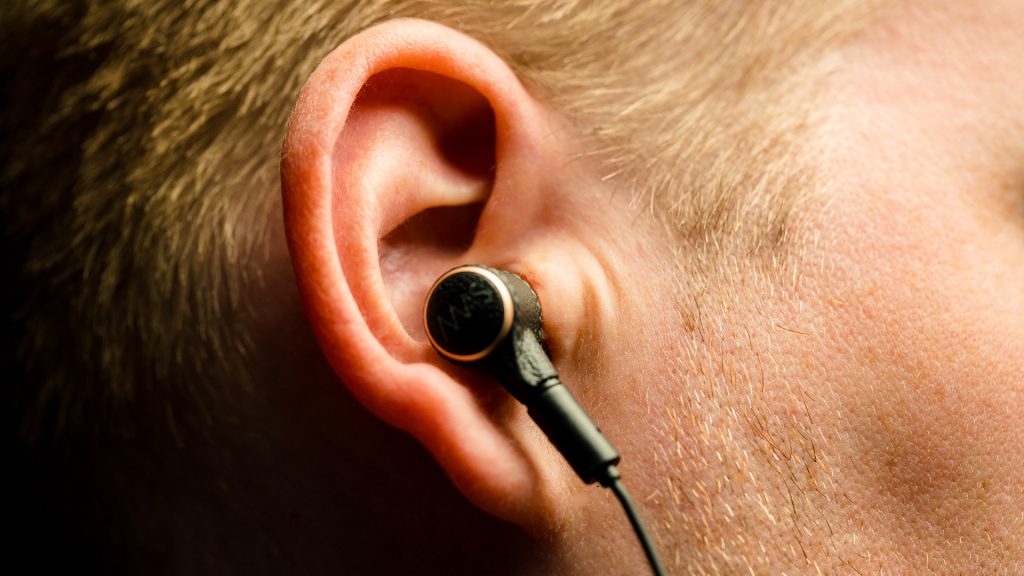 For my ears, I found that the earbuds tended to come loose fairly often when sitting at a desk, despite having the properly-sized tips (three sizes are included). I think the physical balance of the headphones distributed more weight towards the end of the buds, but this could have just been my personal interaction with them. The strength of these earbuds is definitely in the midrange and vocally-focused areas, with funk, gospel, acoustic, and classical performing at high levels when I tested them.

The MAS Tokyo earbuds have an in-line microphone with single-button control, and it produces good sound overall. At normal volume, the sounds come through accurately, however there were a few minor instances of crackling that came through when the cable was moved around during voice recording.

Overall these are decent quality earbuds, and while I enjoyed the audio performance the design has some drawbacks when it came to my ears. The price is not too bad for what you get, however I think they could be a touch lower in cost to really be a compelling buy for those who don’t enjoy super bass-heavy music. 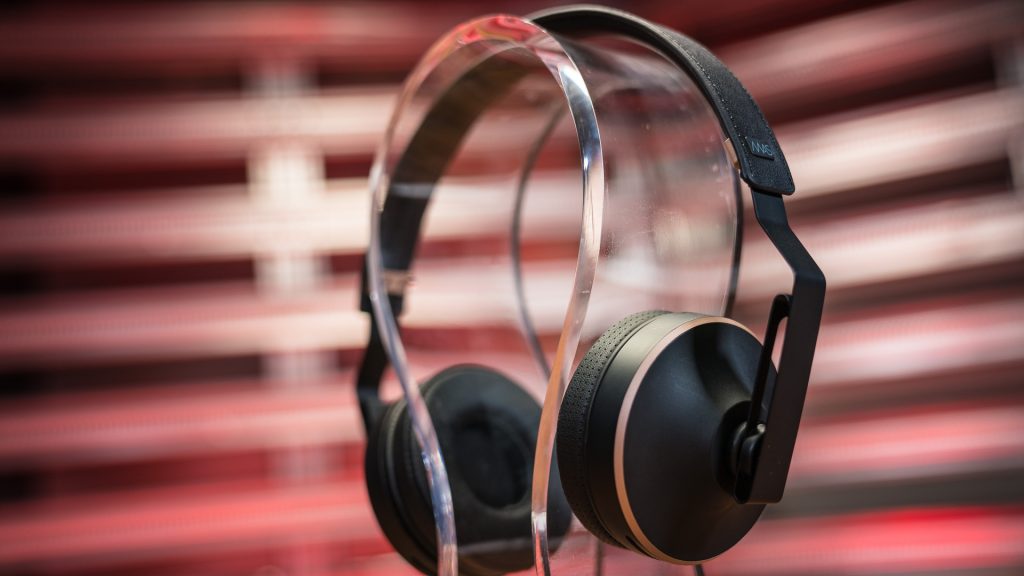 The New York on-ear headphones look pretty clean, with a faux-leather headband and ear cup padding. The headband is not heavily padded, with more of a minimalist design carrying throughout the product. If users prefer a plush headband, this is not an exceptionally strong point for the New York. The padding is relatively firm, and while for me this wasn’t a big deal, it may be a concern for others. Fortunately, the ear cup pads do not suffer from the same fate as the band, as they are extremely soft to the touch on the plush surface material as well as the cushioning underneath. They rested comfortably on my ears for hours, and didn’t cause any sweating, soreness, or other discomfort.

Both cans fold inward on hinges that snap firmly into place when opened, so the unit can be compressed down to a semi-circle. Since the cups do not rotate they cannot fold flat, but it does reduce the footprint a bit and make it more portable while offering some protection for the supple padding.

The cans are made of a black plastic, with rose gold-colored accents. For $150 I would think they would have a little more heft to them, as they don’t feel extremely dense. This could be a design choice to keep the overall weight lower and not add additional cost to heavy materials. The cups ride on a flat metal strip, which can be slid up or down to adjust to different-sized heads, while continuing the minimalist theme. These slide easily enough on the rail when necessary, but didn’t slip down when I didn’t want them to. My head is pretty average in size, if not a bit narrow, and they were able to fit comfortably. 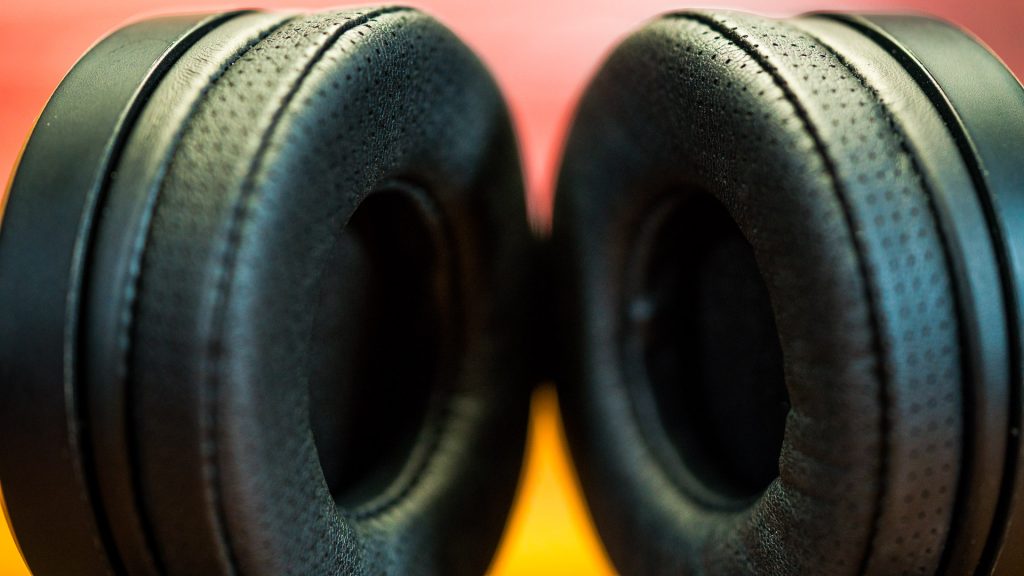 These on-ear headphones have 40mm titanium dynamic drivers with a bass-enhanced enclosure (there are two air vents on the bottom of each ear can). These headphones also have a 16ohm impedance, and also are Hi-Res Audio compatible with a frequency response of 8-40,000Hz, however they have a sensitivity of 108 dB.

The bass has solid depth; the heavy bass lines come through clear while the mid bass doesn’t have any muddiness. Interestingly enough, when I first listed to a handful of test songs I thought that the headphones were weaker on the heavy bass and skewed towards the mid bass. Not until I listened to bass boosted EDM, hip hop, and trap tracks did the full capabilities of the headphones really come out.

Listening to thunderstorms was another fun experiment, as the fluctuation between medium to light bass notes was hearty and clean for a rich experience. If any fault must be found here, sometimes the mid to upper bass seemed a touch punchy on the non-bass-boosted tracks I listened to.

The midrange on the headphones is strong, with good transitions between the notes free of distortion at higher volumes. Horns and cymbals sound bright and rich, with the subtle nuances carrying through while the snare and higher drums are tight and crisp.

The treble notes on the New York came through clear and warm, which was enjoyable when listening to folk, classical, or electric guitar tracks.

Similar to the Tokyo earbuds, the vocals on the on-ear headphones were a strong suit as well, with a crisp presentation. Different tonal shifts were smooth and silky, with the minor variations in vocals coming through with clarity. 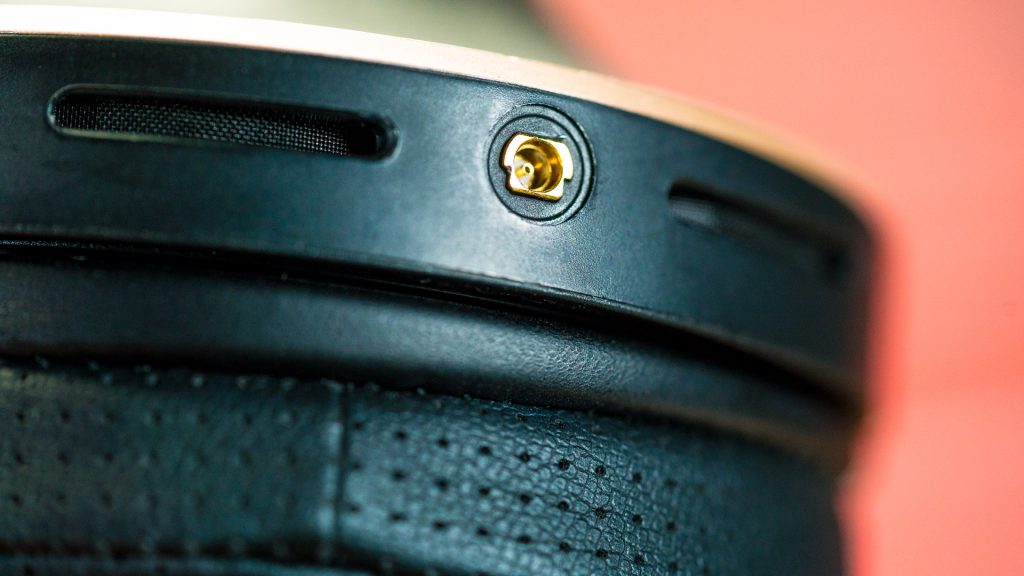 I found the ear cups rested nicely on my ears. The material is soft, with a few hours’ use in one stretch not causing any soreness or sweating. The headphones overall are not very heavy, and this helps avoid any fatigue for long periods of use or unnecessary bulk that some headphones pack on.

The strength of the dynamic range and comfort of the New York made it my preferred headset out of the two I tested, by far. All in all the tonal balance was more even in the New York headphones than the Tokyo earbuds, and I would peg these as much better. My initial interpretation of the bass as slightly weak was really disproven with bass-enhanced tracks, which revealed a slightly punchy mid-bass. This isn’t unbearable though, and overall I am quite pleased with the sound.

The New York headphones also have an in-line mic, and it works quite well. The sounds come through clear, without aberrant static or artifacts. At normal distance from the mouth when speaking, I only noticed a handful of times that certain annunciations of “T” it would get blown out. If I really cranked up the volume every so often there was a slight bit of noise from the cable, but at normal listening volume this would not be noticeable. 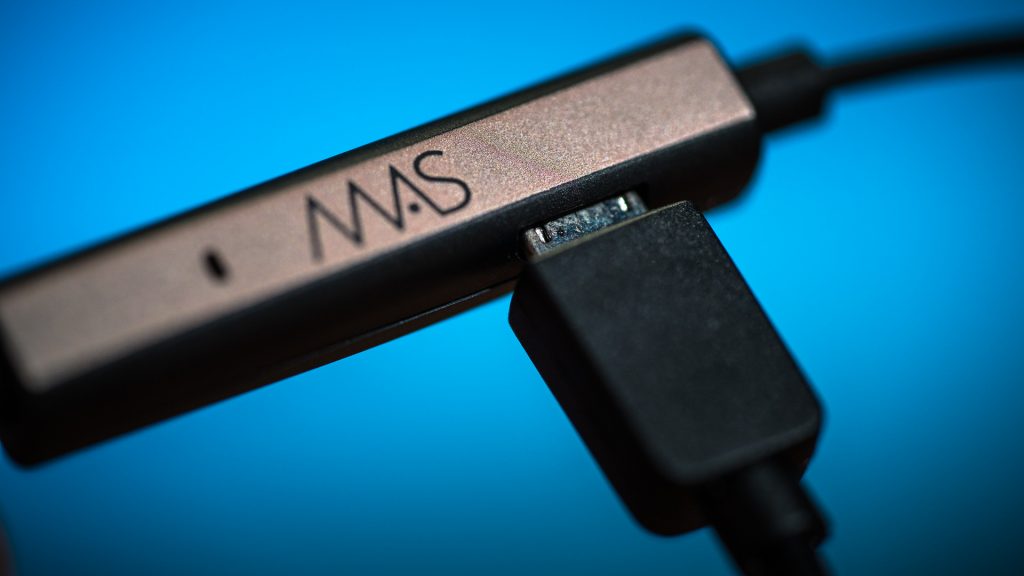 The MAS DUO ($84.99) is Master Art of Sound’s Bluetooth attachment that can be used with either model, converting the wired headphones to wireless via the MMCX connection, which snaps into the base of each headphone or earbud. The DUO has an in-line volume control, micro USB charging port, and microphone on one side, with another module on the opposite side containing the other components.

The connector uses CSR Bluetooth 4.1 with Qualcomm APT-X tech, which allows for clear communication on continuous use up to five hours, with a standby time of 150 hours and a two-hour charge time. I really would have liked to see the Bluetooth capability included in the New York headphones themselves, with a wired option to plug directly into the can. Since the Tokyo headphones are much smaller, the in-line mic and battery on the DUO Bluetooth connector is much more prominent and makes the whole setup a lot heavier. $85 for the setup is steep in my opinion, as including this pushes the Tokyo earbuds to $175 and the New York headphones to $235—far over what similar Bluetooth headphone counterparts would be.

Do you need MAS? 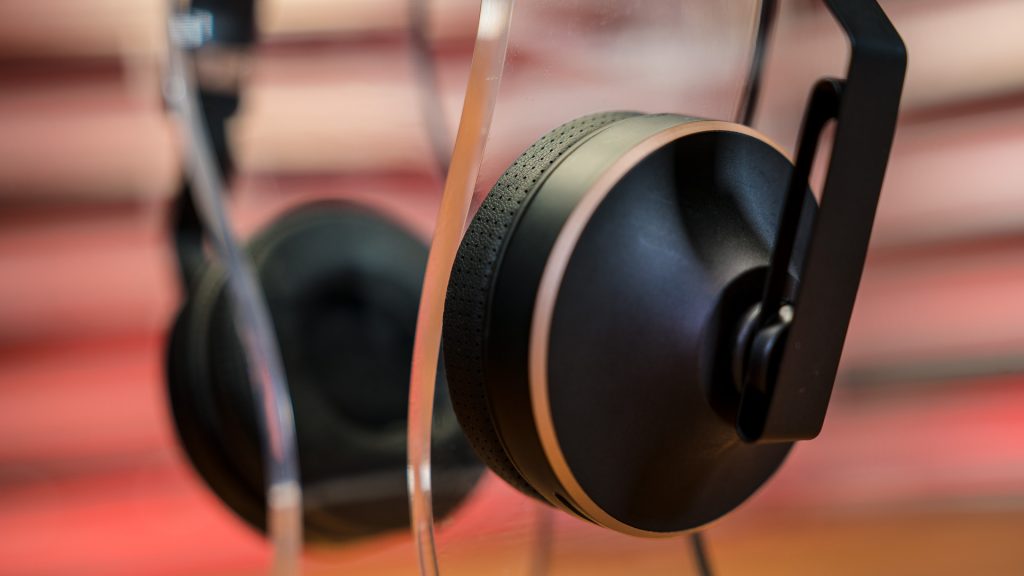 From a sound and design quality perspective, overall I think that Master Art of Sound is off to a good start. Their first models out of the gate are diverse, stand up well to most different music genres, and they are comfortable. For me, the New York is a clear standout and my preference between the two, as they come bringing the power, a deeper and tighter bass, and a more dynamic range. While I think both could be a touch cheaper than they are currently priced, they are not a bad buy. And from what I’ve seen of the first round, I would expect their following models to be even more compelling than the first.