From Work to Play in a BLINK, Electric Skateboards for Adults 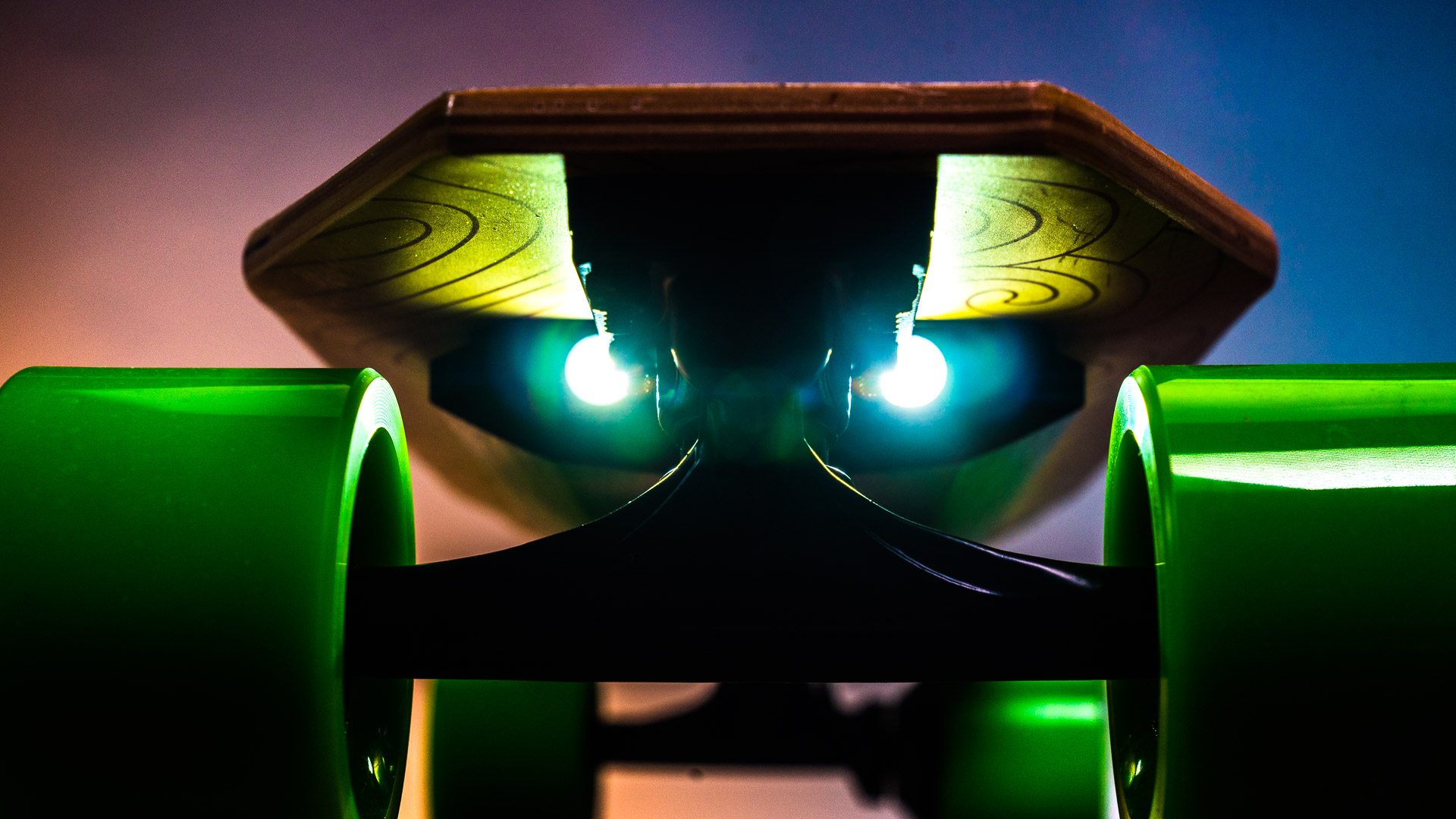 I can fondly recall the prime of my adolescent youth, when bombing a skateboard down the block was my favorite thing to do. Getting outdoors, speeding around, and feeling the wind in my face was the closest thing to pure freedom I could manage. As an adult regular skateboarding is no longer part of my life, but the thrill is still there.

In the name of progress and tech innovations breathing new life into old practices, electric skateboards have been getting more popular over the last few years, with a slew of new brands cropping up and even a big base of DIY electric skateboard fans making their presence known online.  To my joy, the ACTON BLINK electric skateboards made their way into my hands, and a little piece of my youth came back to me.

ACTON is a startup from Santa Clara, CA that is now several models deep into the electric skateboard game. Their two e-boards that I took for a spin, the BLINK Lite and BLINK S, are the forerunners of their lineup and have quite a following so far, which seek to up-end the e-skateboard industry. The massive success of their Indiegogo campaigns and the fan popularity afterwards has led to the launch of successive models which expand upon the capabilities of the first boards in big ways.

Why would someone want an electric skateboard?

While skateboarding in general can be a fun hobby, it is foremost a transportation method. Getting from point A to point B, within a relatively short distance, is prime skateboarding territory. Now imagine those same benefits with the added ability to go many more miles than by foot power, much faster, and up hills—all without breaking a sweat.

Electric skateboards are great for quickly covering ground in urban areas as commuter devices, which can add a substantial amount of range beyond non-powered models or foot travel. They also can play a key role for those that need to take public transit for longer distances and still have ground to cover (in between buses or trains), and don’t want to lug a bike around or battle with crazy drivers on the roads.

From a pure enjoyment perspective, electric longboards and skateboards offer a thrilling ride for those who can carve, slide, and  bomb hills—pushing the speed boundaries for the skilled and adventurous. 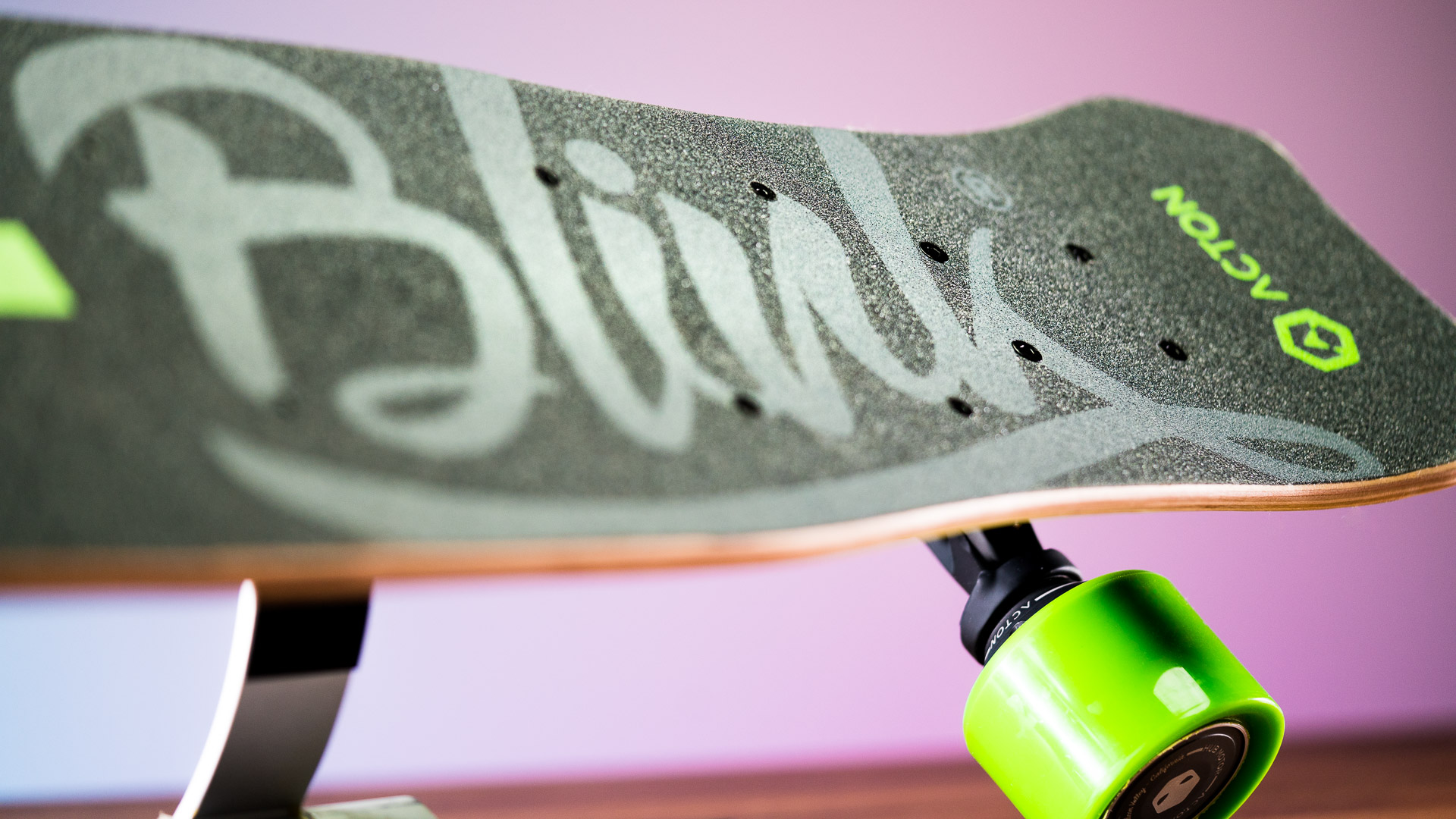 The BLINK Lite is ACTON’s base model, which is quite affordable for an e-skateboard (it’s currently available for about $175), and caters to the entry-level consumer. For motorized use, either forward or reverse directionality is controlled via a wireless handheld remote, powered by a throttle switch. A critical safety element that any reputable electric skateboard has is the ability to use the remote to brake electronically, since increasing your speed calls for something more substantial than a foot on the ground. To the tune of safety, the BLINK Lite has a white LED light bar on either side of the battery pack, which illuminates both the ground and the board on either side making for a more noticeable presence in low light conditions.

The ACTON app is pretty straightforward, with a mode selector between “Beginner”, “Normal”, and “Pro” to help users curb the power if they are learning, or for younger riders. The app has a speedometer, mileage log, battery meter, and ride time counter, although I found that once paired and riding had begun it was much safer to not mess with a phone. 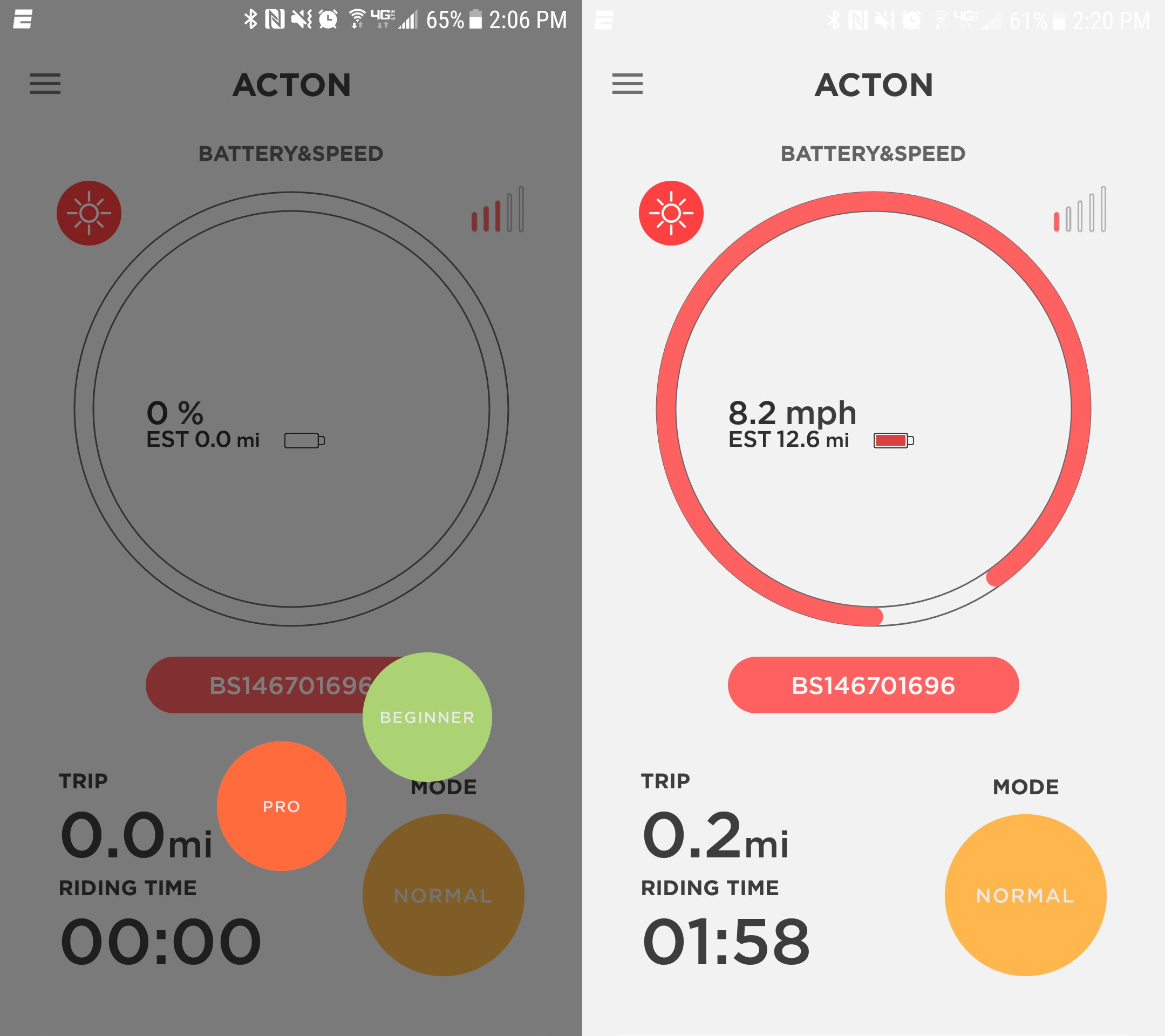 The ACTON BLINK Lite stakes the claim as the lightest commercially-available electric skateboard at 7.7lbs and 30” x 10” x 6”, and after doing some research myself it seems they’re correct in making that claim. Most of the electric skateboards available on the market are actually closer to the longboard style, which makes the BLINK Lite pretty unique in that regard.

The BLINK Lite has a five-mile range, with a one-hour charge time from empty to full. The multi-layer Canadian Maple deck and 70mm wheels are rated for up to an 180lb payload, however I am just a touch over that and didn’t notice any power, strength, or handling issues.

The max range of the Lite is five miles, with a max incline of 8% (4.6°). That five miles isn’t the most expansive on the market, but with the regenerative braking helping to recover some energy it can definitely be the transportation tool to solve short-distance commutes or campus treks.

Power to the pavement

The single-wheel hub is powered by a 450W motor, which gets its juice from a Samsung Lithium-Ion cell 25.5V battery nestled underneath the deck. This can push the BLINK Lite up to 10mph, with some variation in distance dependent on the individual weight, incline, and amount of time at full throttle.

The Blink Lite is a great board for getting into the electric skateboarding hobby, and offers a solid all-around performance. The weight and size are minimal, and while the range or power are not earth-shattering, a five-mile range and 10mph is a sturdy output for effortless personal transportation, and the cost is super-approachable. I would say this is really a great model for college students, as the cost is low and getting around campus and the near vicinity it totally doable with a five-mile range. Really, this could also be used as an adult electric skateboard for short-distance commuting too, but the weight limit might be restrictive. 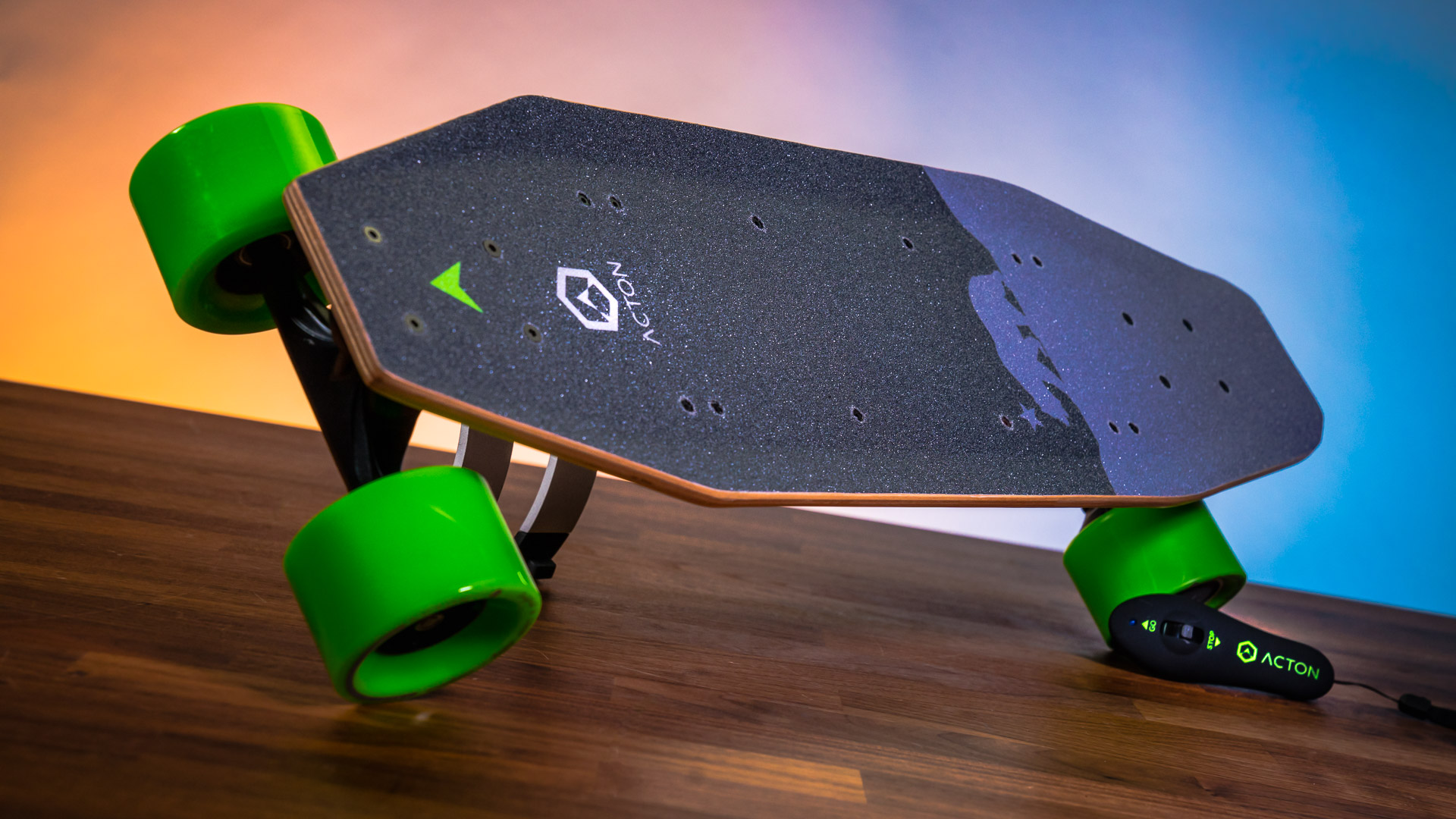 For those looking to kick things up a notch, the next step up in performance is the BLINK S. While this is pretty similar to the BLINK Lite from a technical perspective, there are a few minor differences. The S has the LED light bars along the sides of the battery, but also adds a pair of LED headlights as well as tail lights to up the visibility, making it even better for commuting or shredding in low-light conditions. The battery is also encased in aircraft-grade aluminum, which keeps it protected from any light threats, although taking it up on a rail is still probably a bad idea.

The BLINK S bumps up the range to seven miles, with an increased ability to tackle hills up to 15% (8.6°) incline rate. The seven-mile range is pretty substantial as a commuter, where that distance should be able to cover the distance from bus stops or train station, or even traverse metropolitan areas. From a transportation perspective I can’t imagine I would want to stand on a board for more than seven miles straight, and with the total charge time being less than an hour users can take full advantage of that range in each direction.

ACTON also increased the board size to 27.5” x 8” and wheel size up to 83mm, in order to handle a payload up to 220lb and keep things rolling smoothly. That beefing up did increase the weight some, up a mere 2.5lbs for a total weight of 10lbs—still hardly what I would consider a burden. 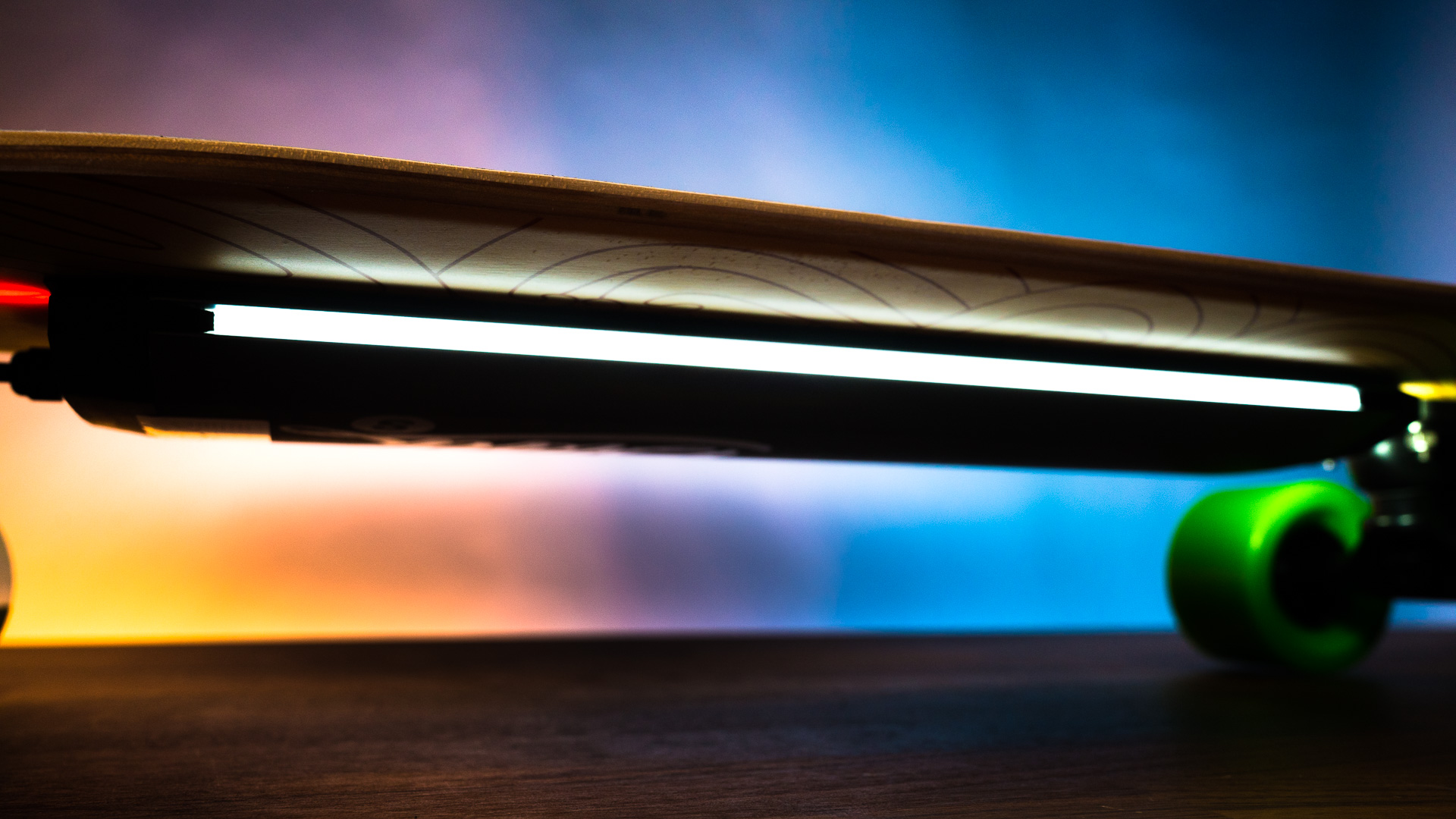 The S model tops out at 15mph via a single-hub, 600W motor, which I have to say is no slouch. In my younger days I’d have no problem pushing over that, but in my 30’s the possibility of a spill at higher speeds isn’t a risk I’m so willing to take.

That said, from a commuting perspective and even zipping around for enjoyment, there is a ton of fun to be had at that kind of speed. 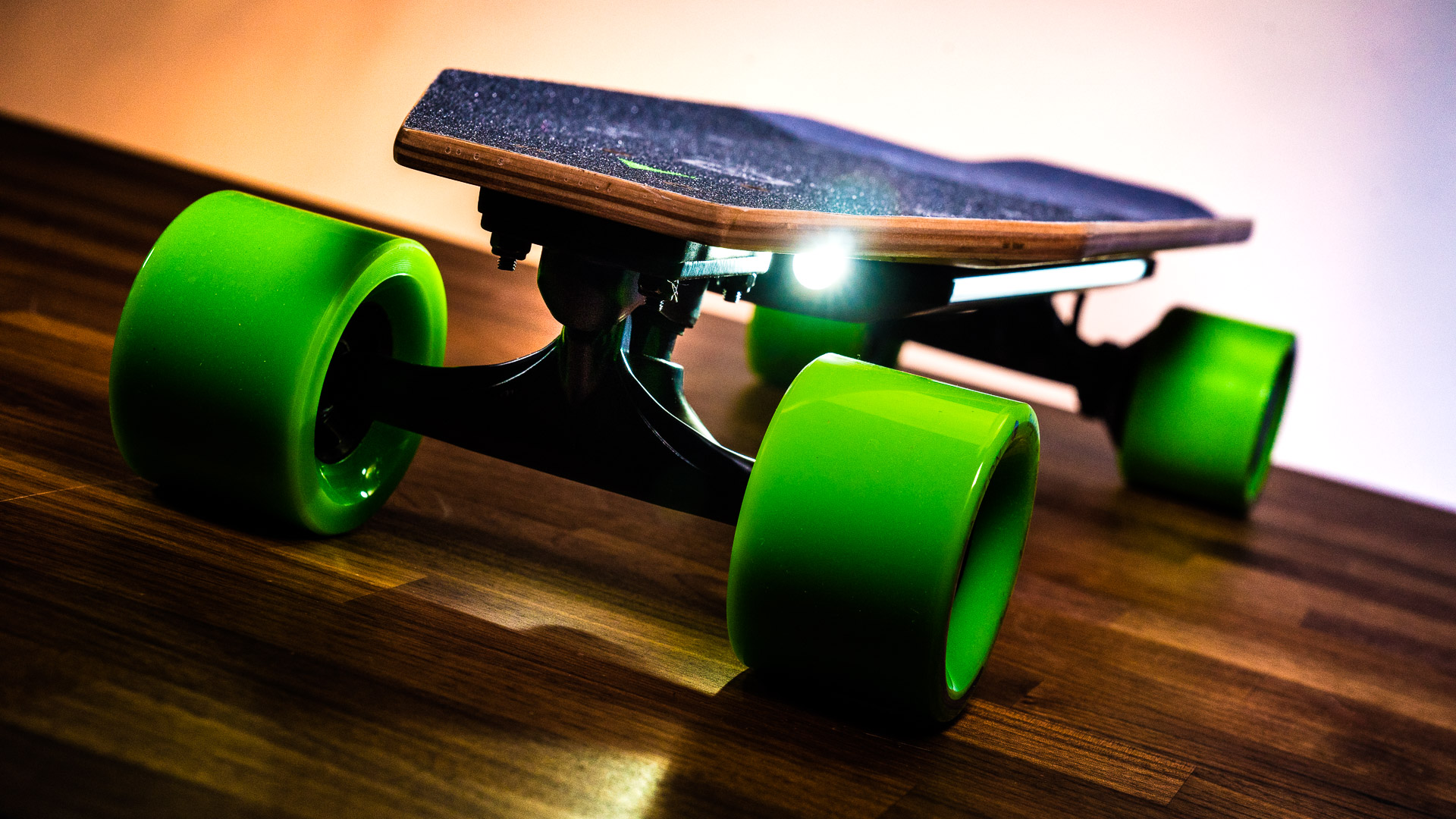 Both these boards have some pep to them, and can take riders much faster than normal leg-driven skateboards or walking ever could. It should be noted that for the speed demons out there looking to push the envelope, there are some out-of-the-box e-boards that can top 26mph! No thanks. I’ll drive if I want to go that fast.

The ability for users to limit the power in the app to accommodate rider progression is nice, giving some extra comfort that someone won’t hop on and barrel down the road out of control. Handling was smooth, as is typical for the big soft wheels and looser trucks on the cruising-style boards. The one qualm I had with the performance was that the braking wasn’t nearly as smooth as I would have liked. It worked quite well to stop the board, however it was somewhat abrupt at times and not as gradual as easing on the throttle to slowly accelerate.

The bottom line is that it works and handles well, just a word of caution to users who might slam down a hill and punch on the brakes: the board will react quickly. 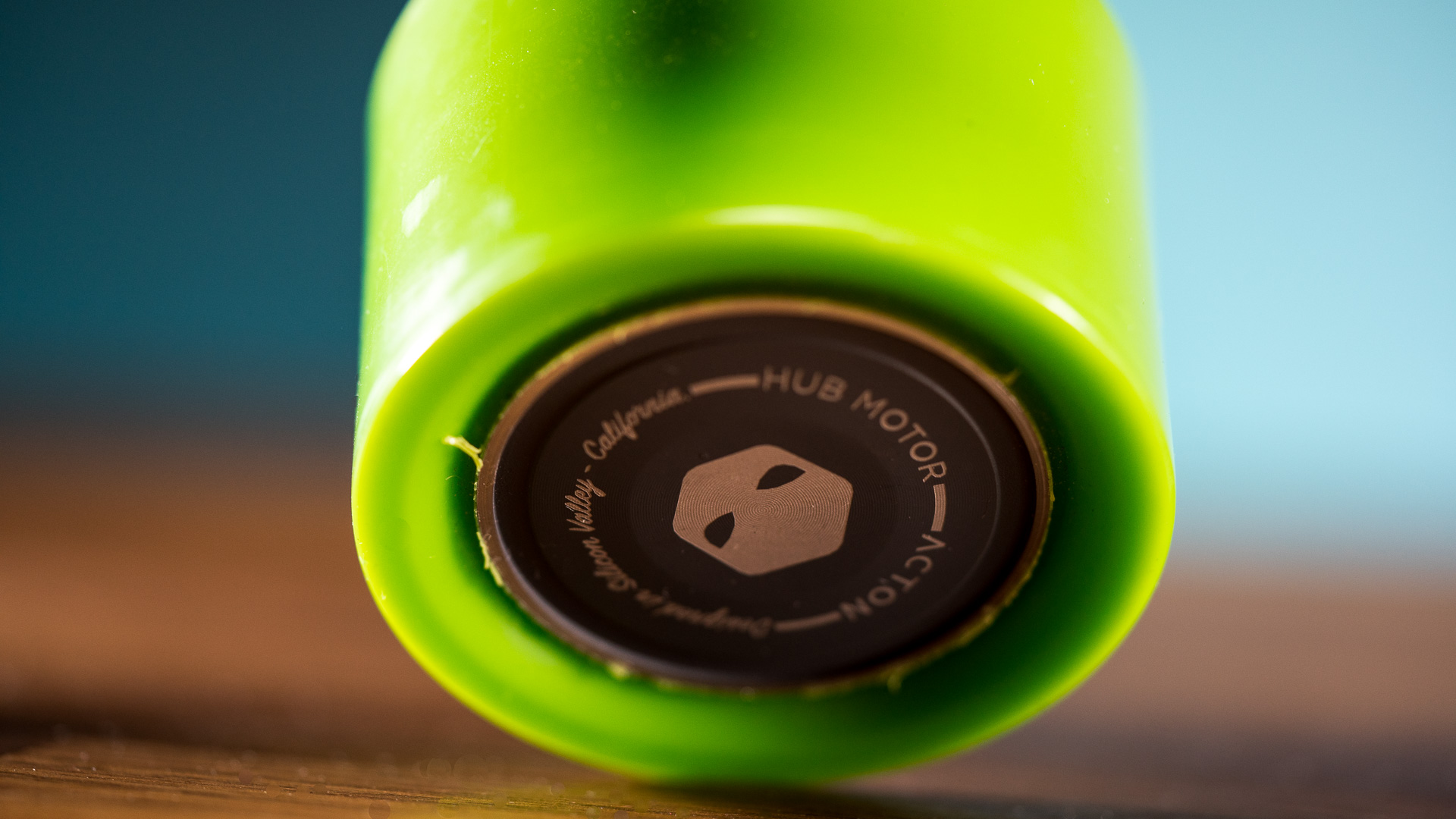 It’s bound to happen at some point when riding an electric transportation device—you run out of battery. Unlike a robotic personal transporter, the BLINK electric skateboards can default back to their non-powered design and function just as a normal skateboard would.

The key to this functionality is the drivetrain system, which is a hub motor. This basically powers the wheel from the inside, minimizing the distance between the motor and the wheel itself. This is a good drive method for those that want to still be able to use their board once the battery dies, because there is less friction on the drive train and thus it can be easily pushed by foot like a normal skateboard. The direct-drive hub method has no loss of power in the transition, and delivers more torque to the wheels. I found that the boards were just as easy to push as a normal skateboard of a similar setup, although the weight was more noticeable in this use.

The belt-driven method is popular in certain applications, however it is not nearly as efficient for transferring power to the wheels due to the loss of power from the motor to the belt, then the belt to the wheel. The drivetrain is also more open to debris and environmental elements (like water),  so maintenance is a bigger factor.

Who are these the best electric skateboards for? 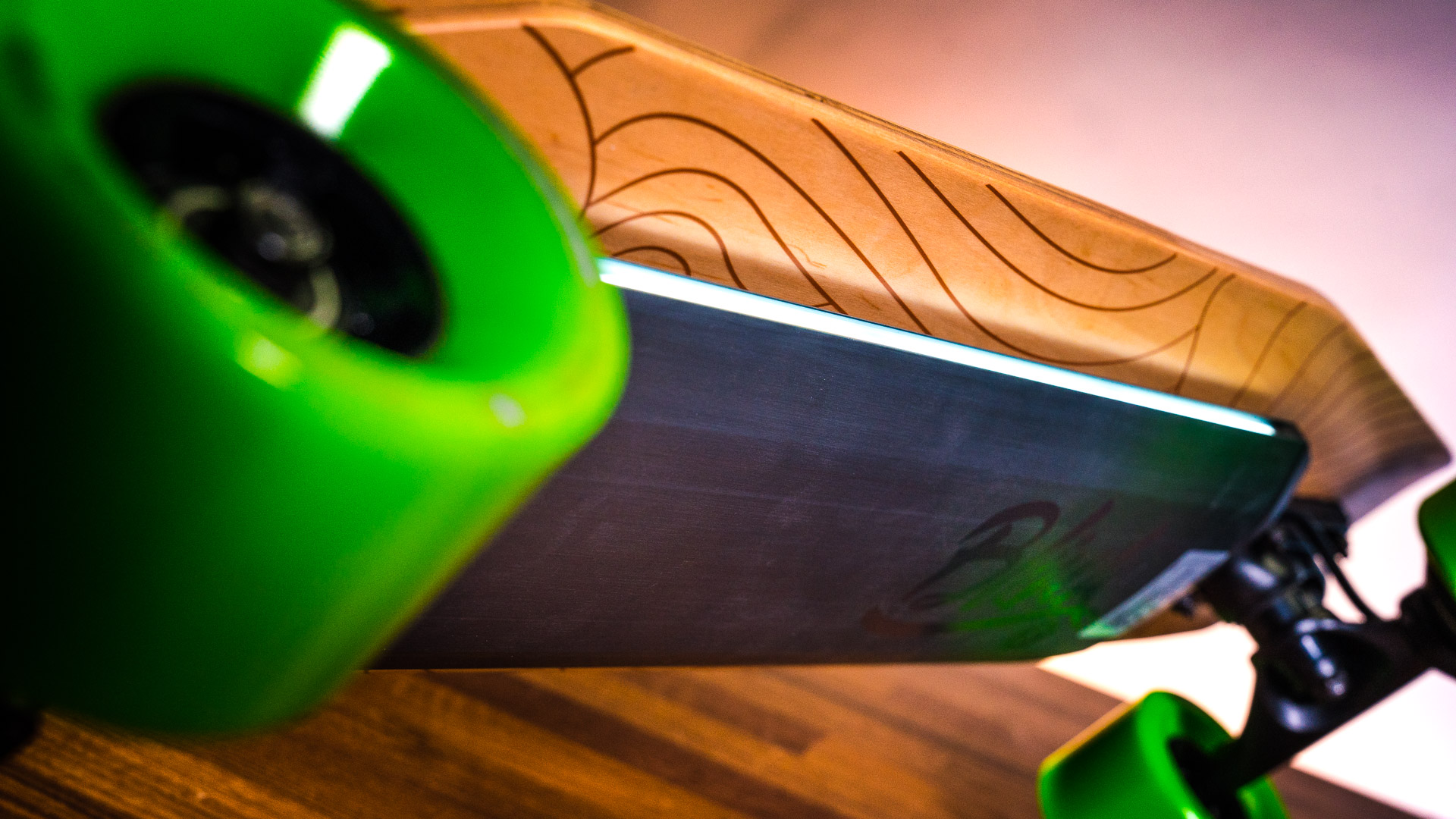 After a few weeks of having the BLINK boards around, I’ve become pretty fond of hopping on and taking off without pushing. Cruising along at over 10mph on a skateboard took a little getting used to, but it is a great way to run quick local trips, especially since the weather in Southern California stays nice for most of the year. From a short-distance commuter perspective, I totally get it. If I lived seven miles or less from work I would be all over this—it gets riders outdoors and off the gas pump, doesn’t cause sweating from pushing for miles, can traverse nominal inclines, and doesn’t take up much space for those riding a train or bus.

This would be an ideal tool for college students who need to get around campus and the surrounding areas, and who either don’t have a car or who want to save money (and have some fun). These boards are thrilling and quite affordable compared to the competition, which gives users a well-rounded board for work and play.