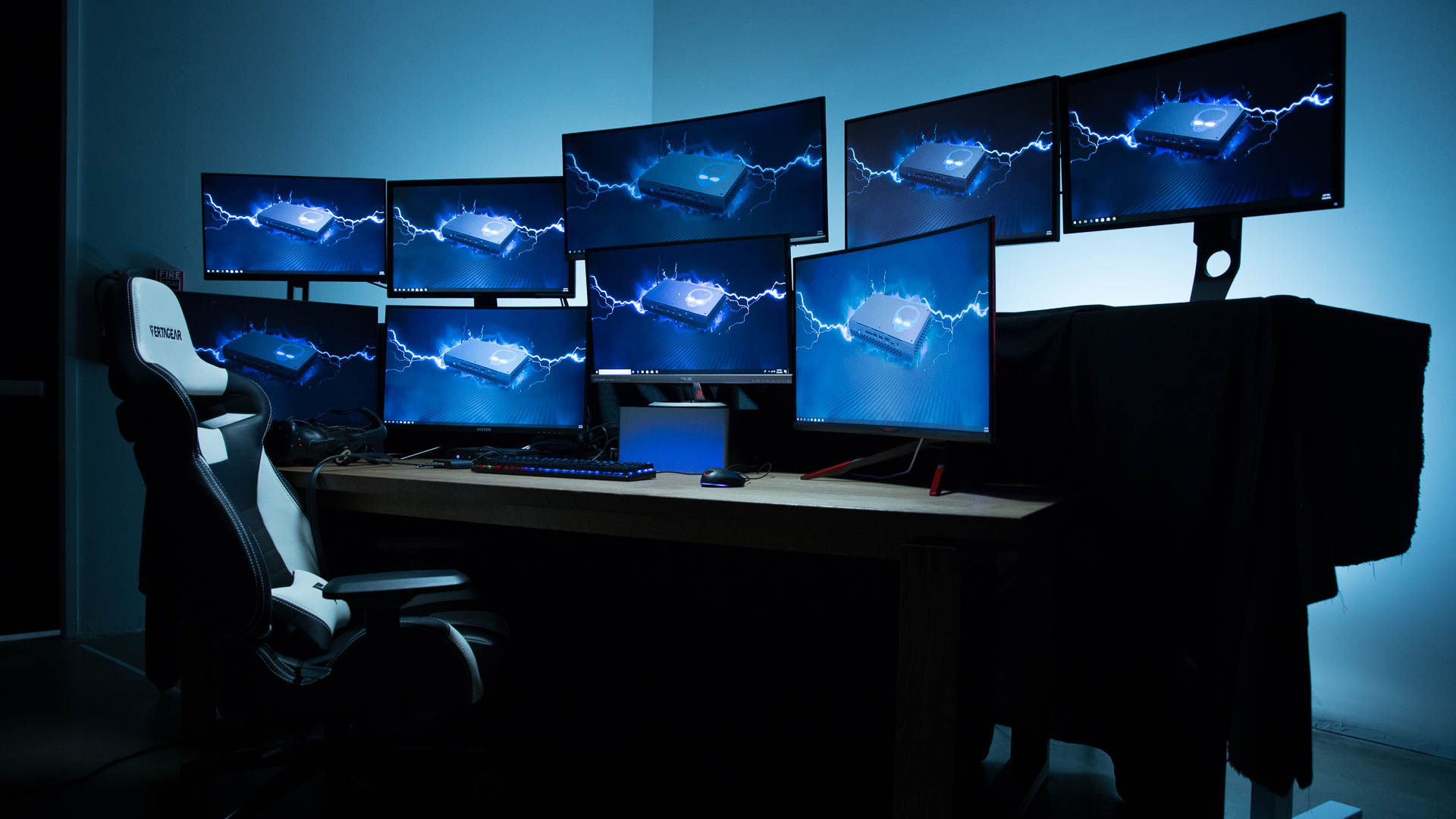 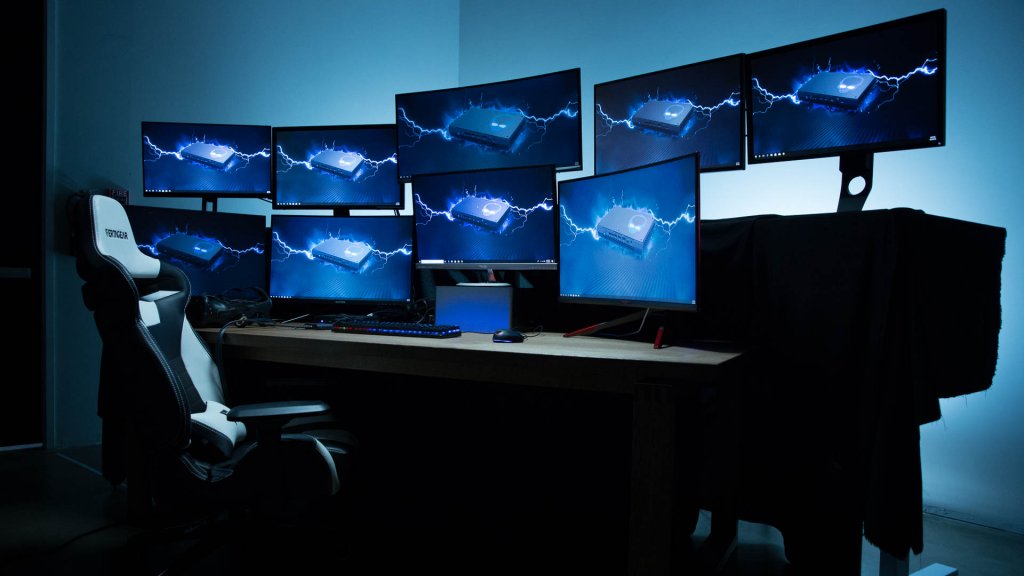 We went a little over the top with testing out the Hades Canyon NUC. We were so impressed by the benchmarks we saw, we fell into a typical “gone-mad-with-power” trap. To paraphrase the immortal words of Ian Malcolm, we were “so preoccupied with whether or not we could, we never stopped to think if we should.”

And thus, our Hades Canyon NUC ten-display battlestation was born.

You have to understand, we had no chance of resisting this kind of temptation. After all, these NUC’s have an outrageous number of video out ports, despite the rear I/O panel being less than 9” wide and 2” high.

What choice did we have?

It Starts With One 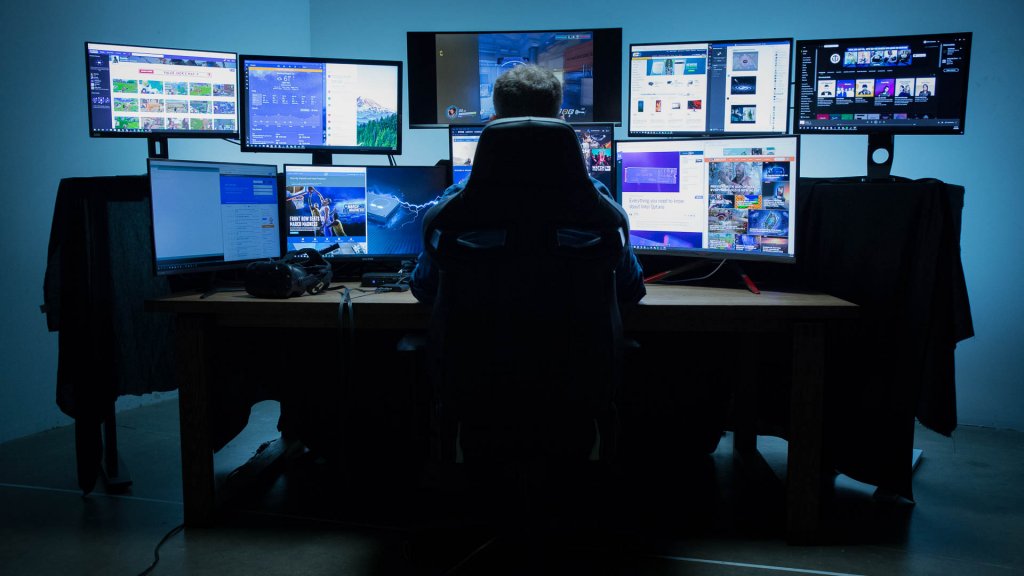 Plugging in a single Viotek GN32LD into one of the two MiniDisplayports wasn’t enough. We followed up with a Viotek GN35LD in the other MiniDisplayport, and another BenQ monitor into the rear-panel HDMI port. Better…but not enough.

See, we know how powerful Thunderbolt 3 is. We’ve written extensively about it, and use TB3 capable devices here just about every day. But we’ve never really pushed it to the limit, and this was our chance, since both Hades Canyon models have two Thunderbolt 3 ports.

We tried to use a pair of TB3 to Dual Displayport Adapters from Startech to break out each Thunderbolt 3 port into two video feeds, but then we ran into one of TB3’s few hard limits: even though there are two TB3 ports, they share the same controller, which means that both ports also share the same two-video-feed limit. We quickly realized that this limitation was actually an opportunity to upgrade this battle station to yet another level of insanity.

While the Thunderbolt 3 controller can only support two video-out streams, it’s also rated to handle six devices total, even if some of those are daisy chained. So we thought, “well, what about an eGPU?” 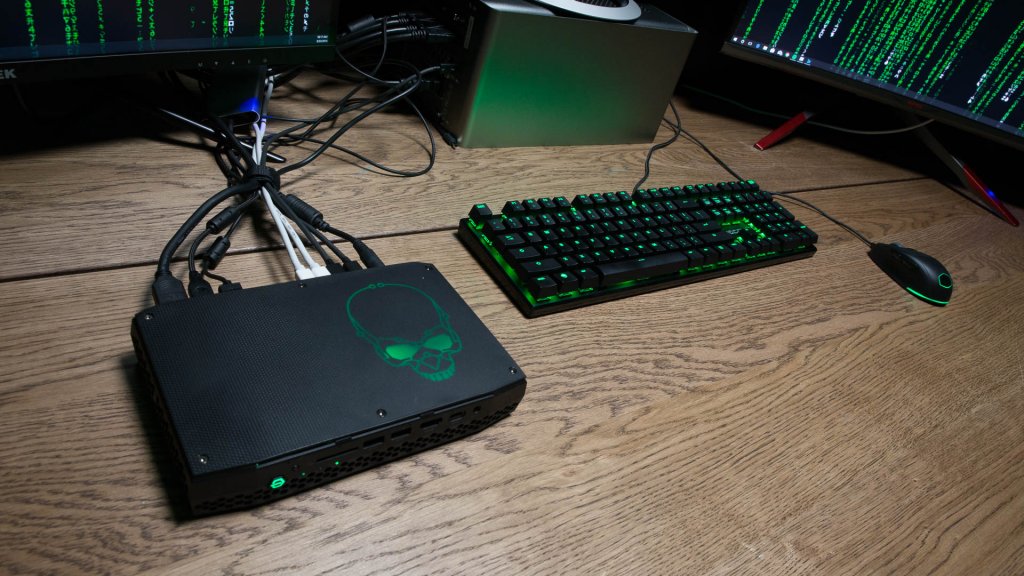 Turns out, one TB3 controller has no problems handling two displays, plus an Nvidia GTX1080 Ti in an eGPU enclosure. This give us another four video feeds to work with, so we hooked up three more monitors via Displayport, and one more over HDMI. It’s also worth noting that the Hades Canyon’s built in GPU is AMD Radeon-based, yet it worked seamlessly with an Nvidia GPU over TB3.

If you’ve been keeping count so far, that’s 9 monitors of different sizes and brands, spread over two GPUs. But, we’ve still got one video-feed unaccounted for and unoccupied. To complete our ten-display battlestation, we hooked up an HTC Vive to the Hades Canyon’s front panel HDMI and USB ports. Here’s a diagram of the cabling we had plugged in at this point: 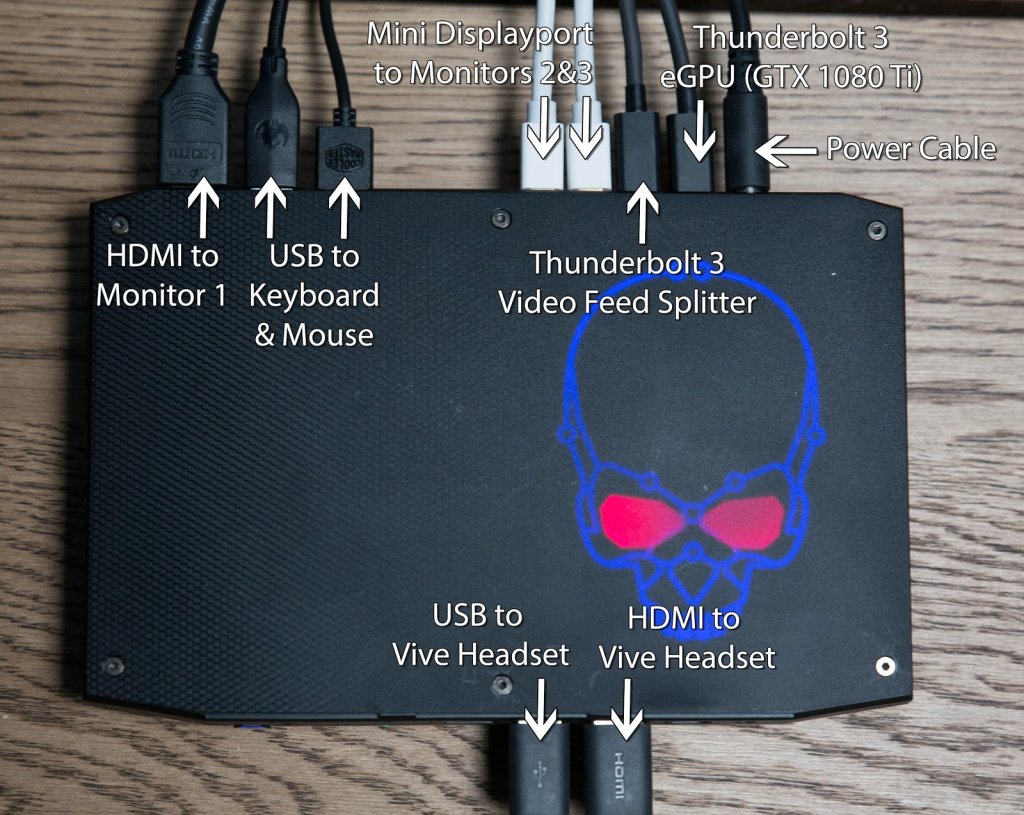 If you want to try something this ambitious, keep a few things in mind. Firstly, while we don’t expect anyone to buy nine monitors for something like this, most of the same good-practice principles apply to less “ambitious” attempts at a multi-monitor setup.

While the monitors get most of the attention in a setup like this, none of it would be possible without decent video cables to actually, you know, connect things. You probably won’t get much benefit out of buying hundred-dollar gold-plated HDMI cables, but definitely make sure you aren’t getting low-quality cables or knockoffs. Our friends at Rosewill hooked us up with some essential cables for this build, because you’ll need some MiniDisplayport to Displayport cables to get the most out of Hades Canyon. 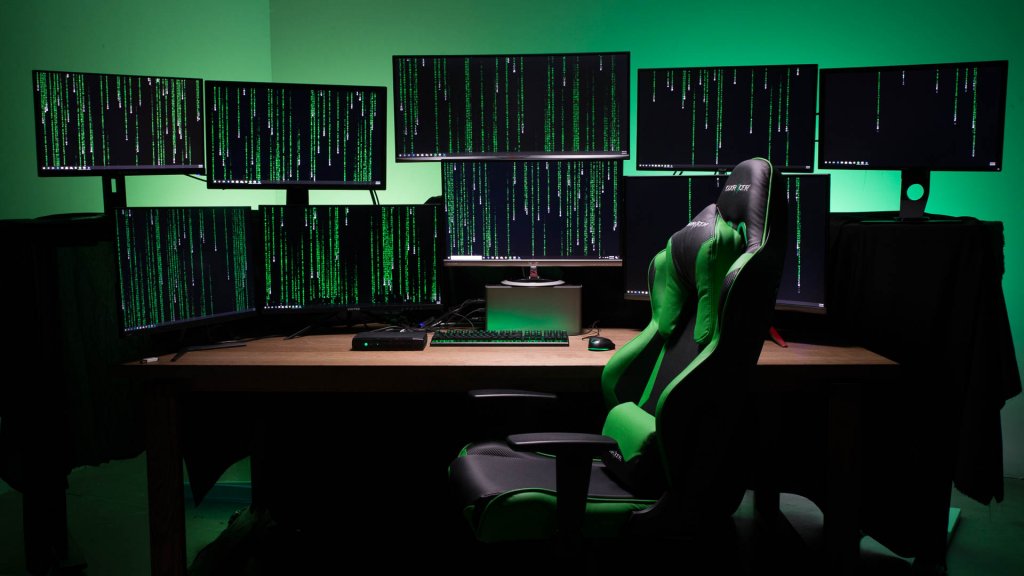 Secondly, have a plan for some kind of cable management before you start connecting your displays. Also, make sure your drivers are up to date. Thirdly, fourthly, and fifthly, have patience, have patience, and have patience. This was one of the more complex battlestations we’ve undertaken, and it’s easy to make mistakes.

Depending on exactly what monitors, connections types, and other pieces of hardware you use, you may run into some temporary issues. Hades Canyon and Thunderbolt 3 are obviously powerful enough to run a setup like this, but getting everything in place and running smoothly wasn’t exactly what we’d call plug and play. 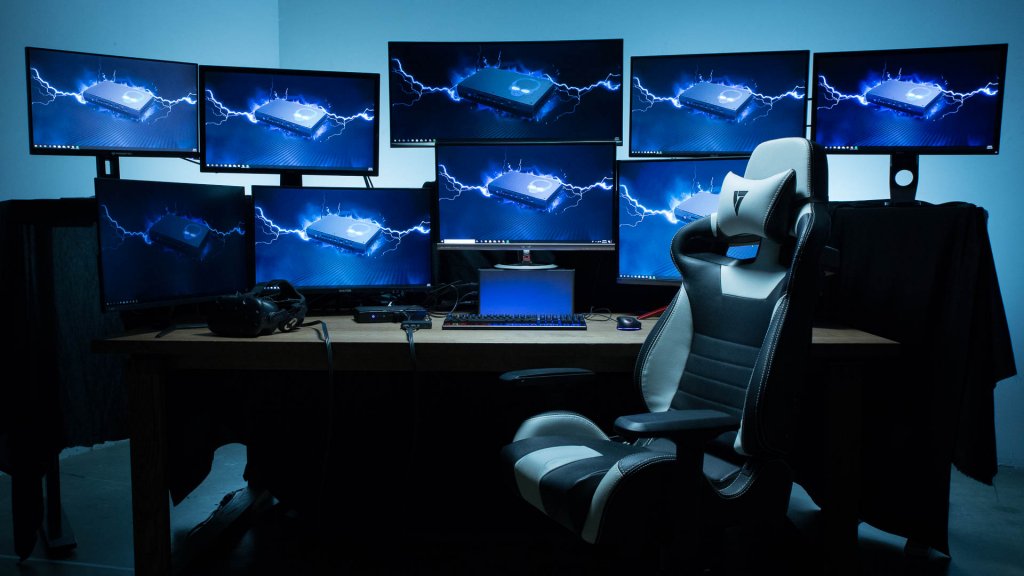 So once you you have nine monitors and a VR headset, what exactly does one do with all that screen space? Well, there’s two GPUs in play, so if you’re some kind of multitasking prodigy, you can easily play two games at once. Or you can just go crazy and have, like, 18 Chrome windows open. (What’s open in those is your business. We don’t judge here.)

Our studio head, being all sensible and business like, suggested practical things, like digital signage or a control station for security cameras.

Personally, I just opened Bag Raiders – Shooting Stars on on a ten-hour loop nine times over, and then made this unflinchingly gorgeous shrine to Nicholas Cage. 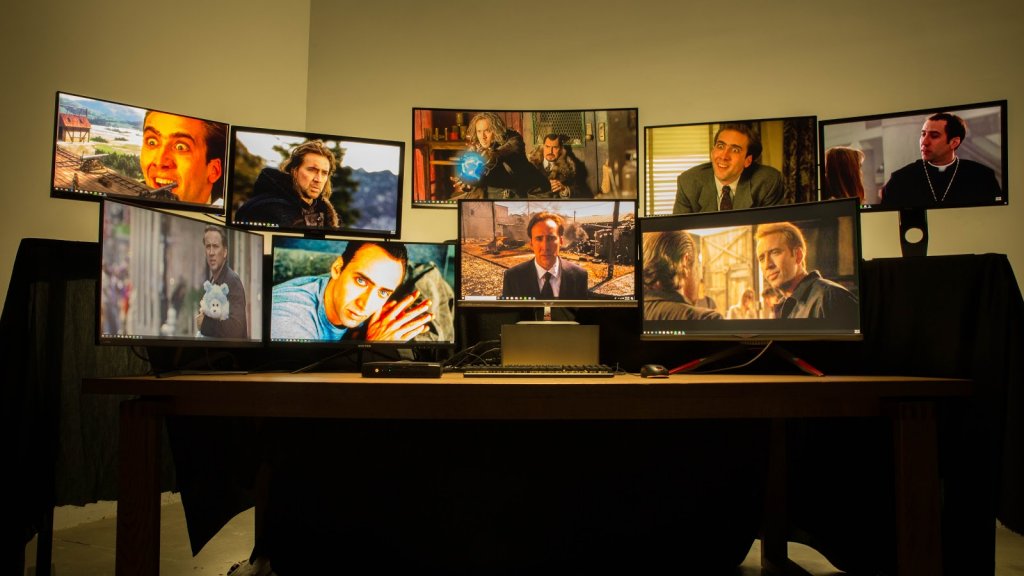 I’m still deciding whether this was my least or most productive day on the job.