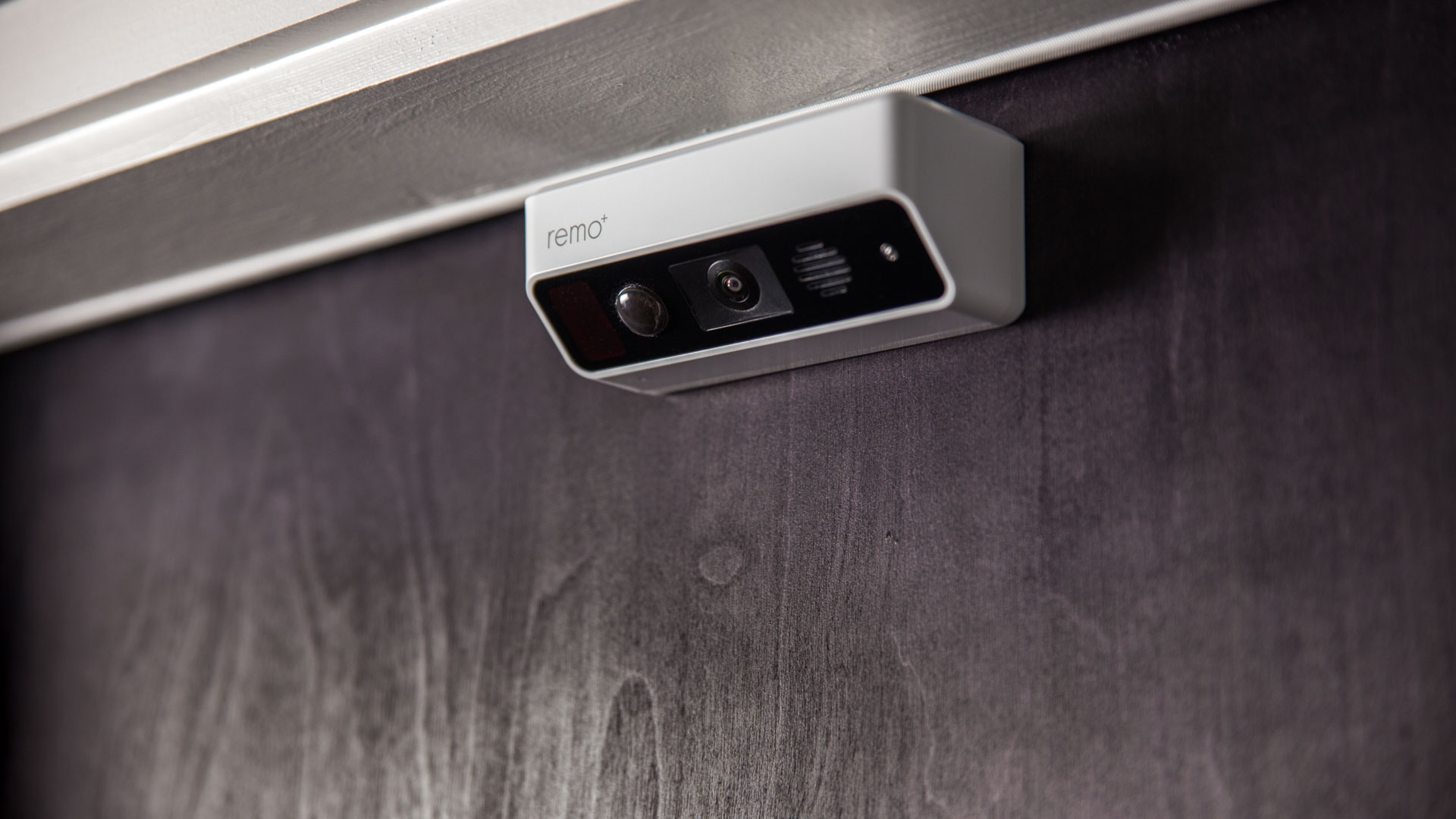 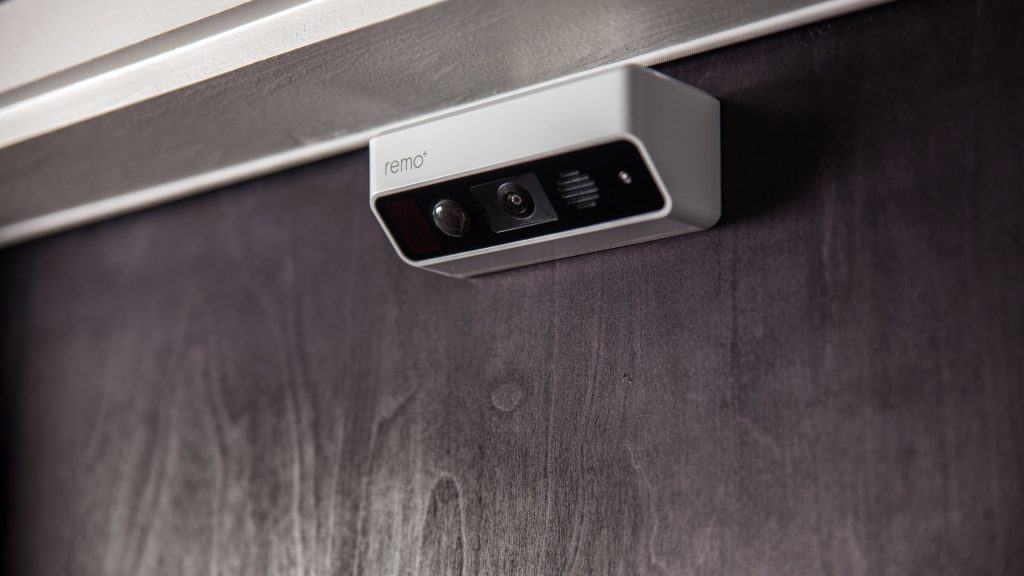 Hot on the heels of a CES chock-full of epic Smart Home tech, the successful devices that made it to production have started arriving at my desk for some fun hands-on testing. One of my favorite cameras from the show floor, the DoorCam from remo+ (the newly branded company that produces RemoBell and RemoCam under Olive & Dove) is an especially exciting treat, as this won a 2018 CES Honoree award and offers a unique angle on smart home security.

As is common with many products in the Home Automation world, the first company to market with a design is followed by a slew of others in similar fashion, some adding value while others are just failed knockoffs. Take the smart doorbell space for example— besides RemoBell, there is Ring, SkyBell, August, and iseeBell that are all unique in their own way, with many more that all are virtually modifications of one another competing for a spot on our porch. The DoorCam looks to carve a new niche in the smart access control space, taking a unique angle. But is it a success? 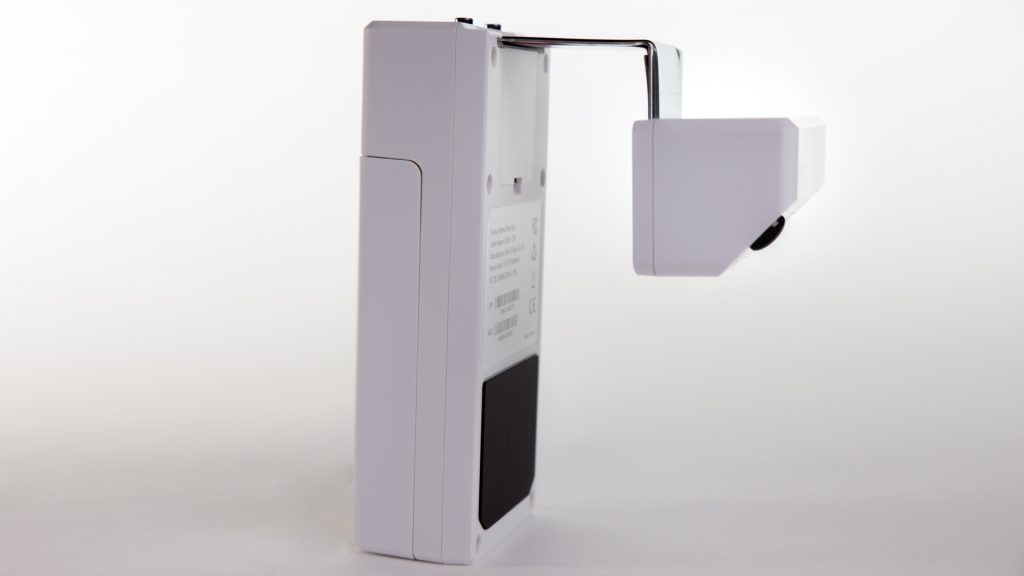 The DoorCam is a pioneer in the field of smart home security in that it is the first over-the-door camera with two-way communications, which requires no installation or modification of any kind. What that means is anyone who wants to monitor the space around their entryways can simply pull this out of the box, slap it over the door, pair it up and be ready to rock. No tools, no wiring, no drilling.

Smart doorbells can be either wired or wireless, which gives flexibility for users who may or may not have a pre-existing wired doorbell. The problem is that even the wireless models need to be secured to the stucco via screws, and this doesn’t leave many options for those in apartments who can’t simply go drilling holes into the wall. While some models come with 3M adhesive tape, there isn’t nearly the level of security that comes with screwing something into a wall.

The $199 DoorCam offers a great alternative, which has the security of a hard-mounted device with the non-invasive characteristics of an adhesive mount, but also leaving options for quickly moving the unit to other doors.

One of the unique elements to the DoorCam is the flexibility it offers to position it at various entryways, where a doorbell may not make sense. Inside an office building, on a side door to a house, a back door or a temporary placement may not be prime venues for a smart doorbell but make sense for the DoorCam. I actually love the ability to move the camera around at-will so simply.

I would normally have something like this on my front door, but I can definitely see myself moving it to the back door to peep on what my dog is doing during the day, and it would be fun to use the speaker in this scenario too. If  could also be used as a nanny-cam inside the house for those with kids, easily secured over the top of a door facing inward, or used to monitor areas of the house that are “off-limits” for house guests. 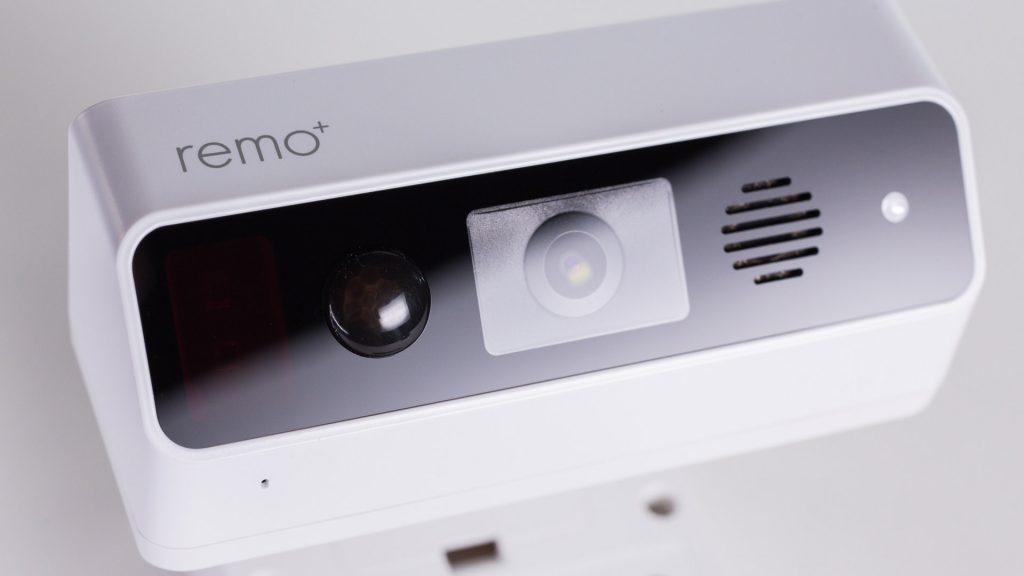 remo+’s camera has a 160° field of view (FOV), which when combined with the positioning of the camera offers substantial coverage of any activity near the door. The unit connects via Wi-Fi, and is powered by three D-batteries that last up to a year. While quite heavy, the battery compartment and unit itself stays securely on the door even when opened or closed with force.

The DoorCam uses a passive infrared (PIR) sensor to detect motion and trigger the video recording, which automatically records 19-second clips to the remo+ cloud. The use of infrared is also put to use when recording night vision, which can be set as an automatic function, on, or off as needed. Parked on front of the unit right next to the sensor is the camera, which records 720p resolution.

Just below the infrared LEDs is a pinhole microphone, which while barely visible picks up a substantial amount of detail. Continuing on across the face of the unit is the speaker, which allow for two-way communication through the app. This would serve both the purpose of screening visitors, or scaring away sketchy characters poking around the house.

Putting the DoorCam to the Test

In practice, the unit worked similarly to the RemoBell smart doorbell in the simplistic nature I have grown fond of with remo+ products so far. Sure, sometimes you want products to be deep and give ultimate possibilities for tinkering and customization, but other times you just want something to work straight away as it should.

The video feed during day was quite bright and clear, with coverage out to about 40’. The feed was crisp enough to decipher details on the app, and I would feel confident using the footage as evidence in the event of suspect behavior.

With night recording, the infrared sensors did their job to illuminate visitors, however at times there was variation in the video color. Sometimes the feed would look a little purple-ish, other times blue-ish, and other times it would look more true to color. It also seemed as though the camera had the best quality night footage when the light was not directly in front of the camera like an illuminated porch light, nor in complete pitch black (for more than five feet or so). The IR sensors did their job in the darkness to brighten up the shadows and even in the complete darkness close-up details were well-displayed. 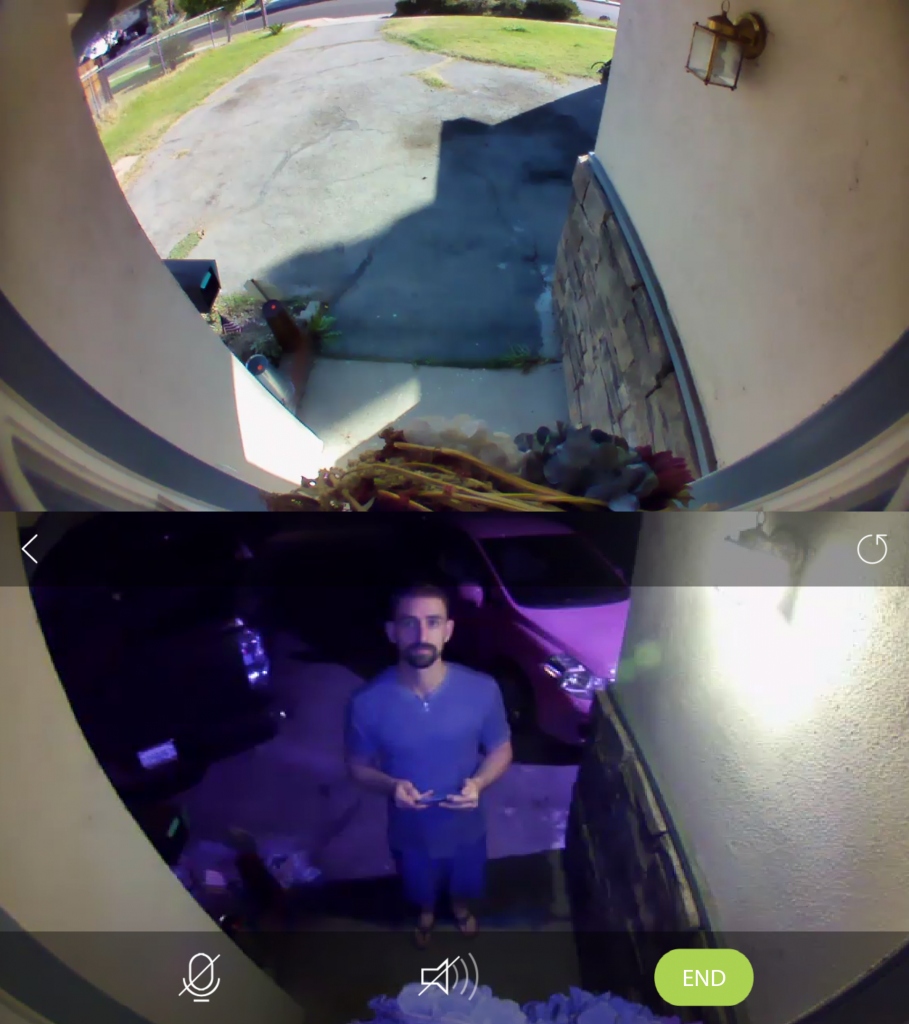 Smart Home Security Away from Home 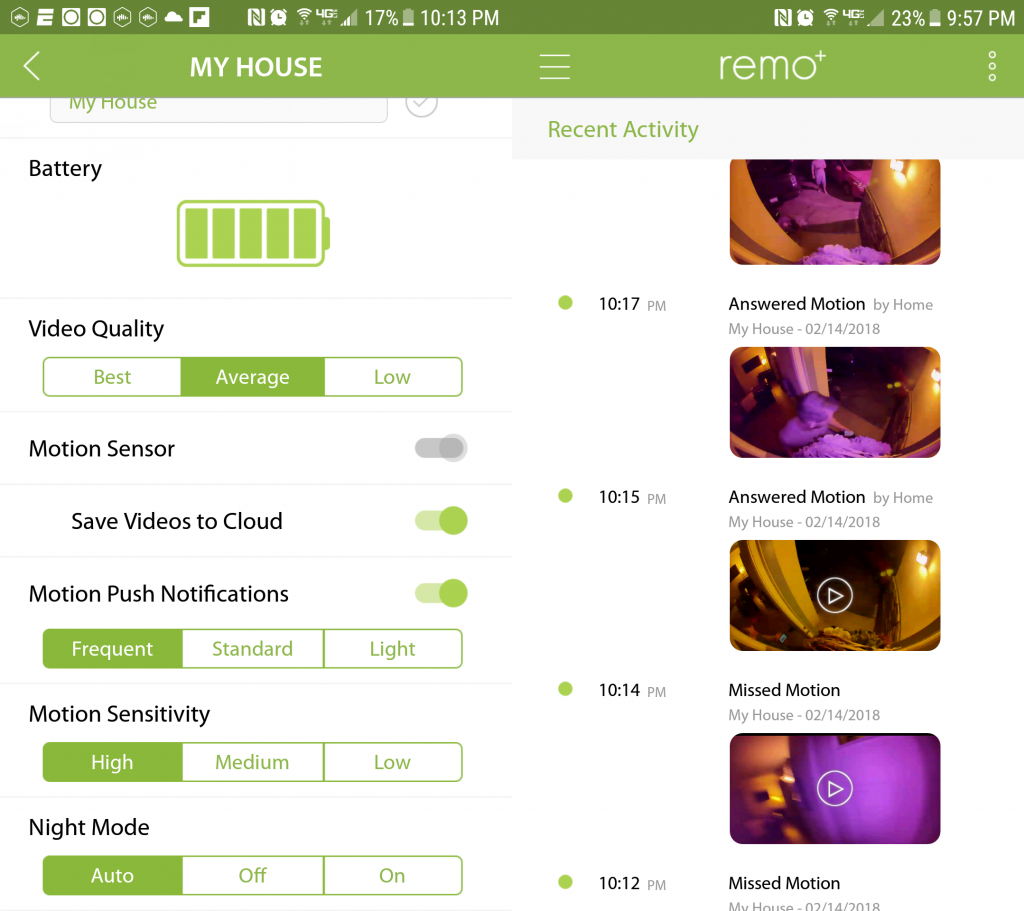 While the DoorCam is nice to screen visitors from the privacy of home, the primary benefit comes during the times when nobody is home. Because of this, having reliable push notifications to alert users of activity is imperative to having a smart security solution.

With the remo+ app, users can adjust the video quality and the motion sensitivity individually on a three-tier scale, while also customizing how frequently notifications would arrive. When I first set up the device I had the sensitivity at the max and notifications at the most frequent, and the daily passing traffic caused a barrage of mobile alerts. Since the street is about 40’ away from my door, I would say the sensitivity range is quite good and for those with a more private area this can provide a very secure solution. These alerts can also be disabled to avoid having repeated alerts during a sensitive time.

Alerts usually arrived instantly after motion was detected, and sustained movement gave the option of enabling the two-way communication almost like answering a phone call. During the “call” users can also opt for a listen-only mode, or mute the communication from the user side. All alerts, both those answered and those that go unanswered are logged in the cloud storage for viewing immediately upon being triggered. Videos are stored for 30 days and can be downloaded at any time, which is nice that remo+ isn’t pushing users to opt for a paid storage service (some smart products give users a small window of time to access recordings on free cloud storage, only opening it up through paid service). 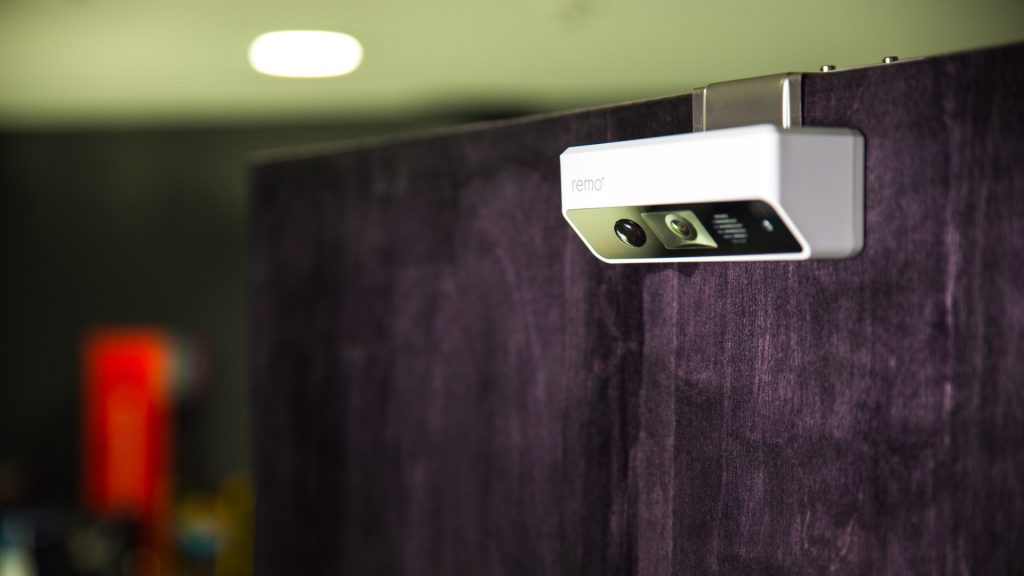 With the advanced level of consumer tech today, it is pretty easy to find a product smart security camera (or any smart product for that matter) that over-complicates things in hopes of delivering the perfect solution. While a thorough solution is a must-have, there is something to be appreciated about a simplified one. Everything you need, and nothing you don’t. The DoorCam does just this, with one exception. I would like to have the ability to disable the motion function and tune into the video feed at any time, which would make this tool even more useful.

I won’t ding the folks at remo+ for this though, as their latest model really does check all the boxes for a comprehensive connected solution for access control. In a landscape that is cluttered with “me-too” products, it is quite refreshing to see some innovation that can change the shape of the category moving forward. From the look of things, remo+ is just getting warmed up and their latest is a testament to the progression of the Smart Home industry— practical function over theoretical application.