The 10 weirdest gaming mice on Newegg

Choosing the right gaming mouse for you can be a complicated process. Gaming mice come in a wide variety of shapes and sizes, with a diverse selection of features depending on your needs and the sort of games you want to play.

For many years the world of gaming mice was dominated by big names like Logitech and Razer, but in 2019 there are more choices for gaming mice than ever before. And as the pool of PC users gets ever-larger, both established brands and up-and-comers are getting more experimental with their mouse designs. In your quest for perfect aim in PC gaming, your weapon of choice can truly be something that matches your individual personality.

Here are ten of our picks for the most distinct, creative, customizable, configurable, and outside-the-box gaming mice available on Newegg. 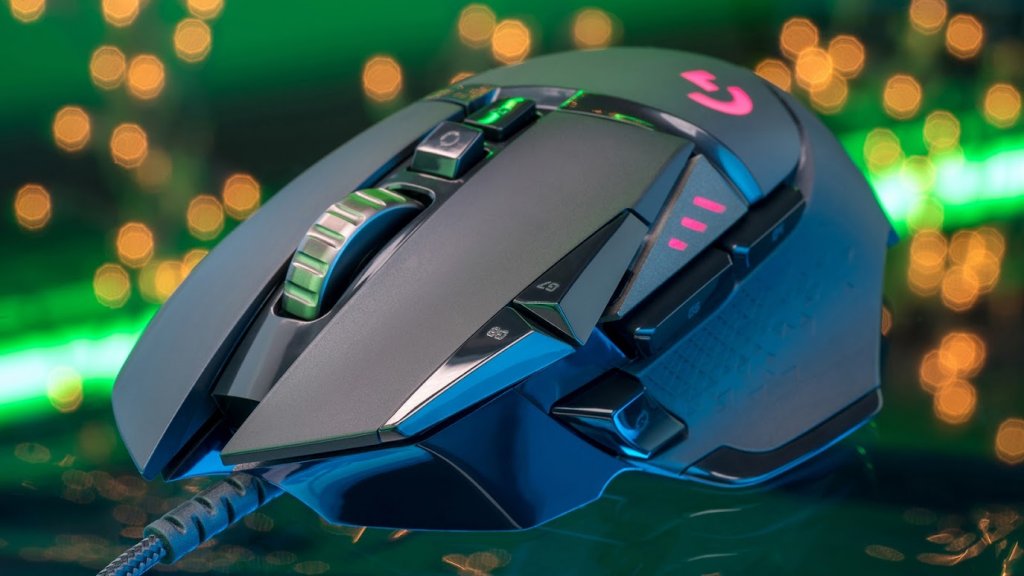 Why it’s good: Logitech’s G502 line has been one of the most popular in the gaming mouse market for many years now, and the latest version, sporting the company’s enhanced Hero sensor, is no exception. This is a fantastic gaming mouse that features plentiful customization options, removable weights, and RGB lighting. It’s the flagship gaming mouse from one of the foremost names in the world of computer mice, and it shows.

Why it’s weird: People have grown used to the G502 over the years because it has been so popular, but that doesn’t make it any less eccentric. It has a metal scrollwheel that you can toggle between standard and infinite scrolling functionality. It also has an eclectic collection of faceted buttons at strange angles (with a look that feels just a bit like a Mad Catz mouse circa 2012), making it very different from Logitech’s sleeker and more orderly options.

Why it’s good: The 700M is a solidly built and customizable mouse that’s a good choice for gamers who like options. It has a great anti-slip textured side grip, and its wide body will be appealing to people with larger than average hands. The mouse wheel is larger and more prominently textured than many competing options, which is nice for those who want more precision when using their wheel.

Why it’s weird: A lot of the mice on this list fall into the “exposed frame with plates attached to it” sort of style, and the 700M is one of the best examples of this form. It has an aluminum frame and a swappable palm rest that can be tuned to a specific height. It features a distinctive small additional button attached to the front left corner of the primary mouse button, something very few mice have ever attempted before or since. It also has optional weights that you can insert into the mouse body in an unorthodox fashion that isn’t unlike loading a clip into a gun. 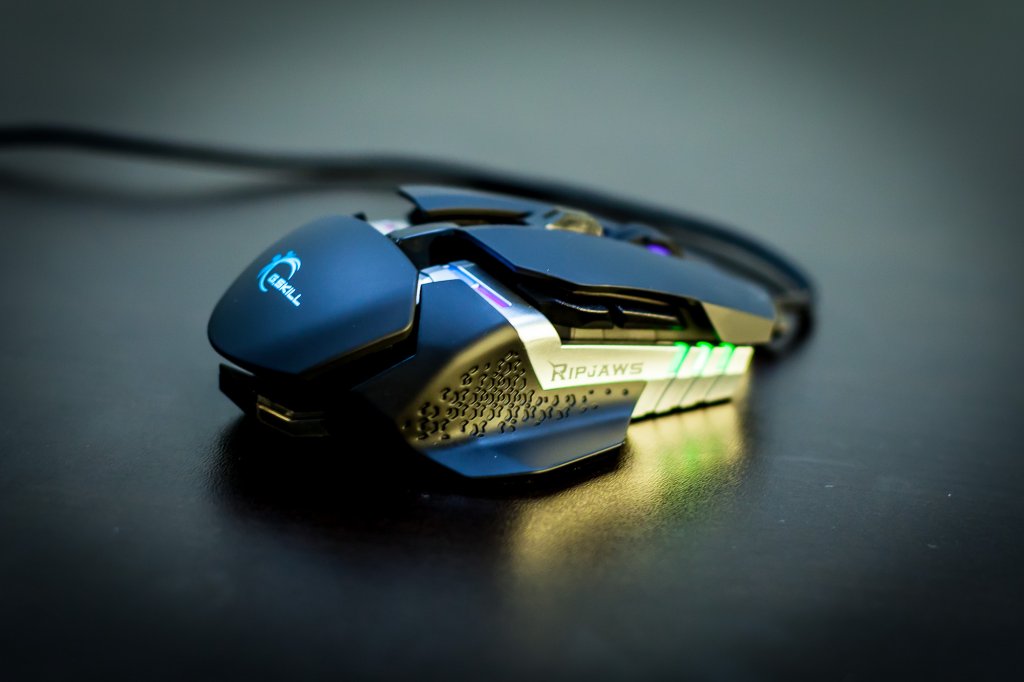 Why it’s good: G.SKILL is a relative newcomer to the gaming peripheral space, after making their name in PC memory, but both their RIPJAWS mouse and keyboard are impressive offerings. The mouse has an ambidextrous and height-adjustable design, and RGB lighting that can be customized across four distinct zones.

Why it’s weird: You can see the interesting grip texture on the mouse in the photo above, and those side grip panels can also be swapped out, which is still a rare and unusual feature. There’s a distinct contrast between the black and silver parts of the mouse that you don’t see very often. The whole mouse also looks a lot like an angry robot face from above, with glowing LED eyes. 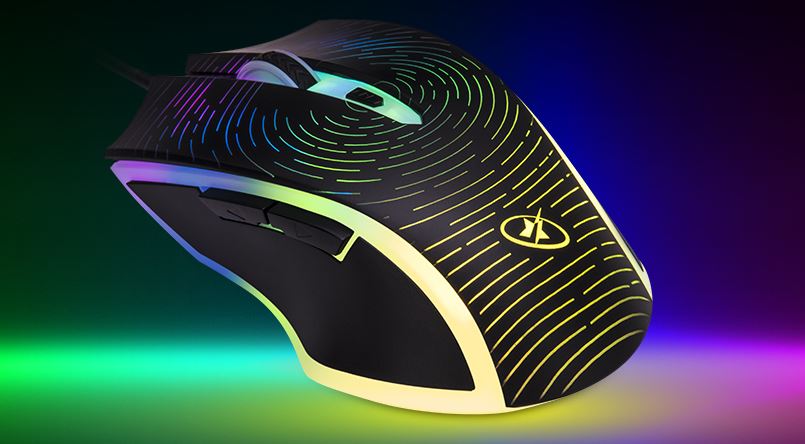 Why it’s good: The Neon M53 comes from Rosewill, which is part of the family here at Newegg, so you know it’s going to be good! Seriously though, this mouse offers a lot of the features you’ll want in a gaming mouse for only $14.99, so it’s a fantastic choice for the price. It has six buttons, on-the-fly DPI adjustment, and glorious rainbow lighting options.

Why it’s weird: See it in the image up there? That’s pretty crazy, right? The Neon M53 shows off its multicolored lighting all over the place, in ways other mice only dream of. The spiral pattern all over the body is unlike anything else you’ll see in other mice, and the light even shines through the sides of the scroll wheel. 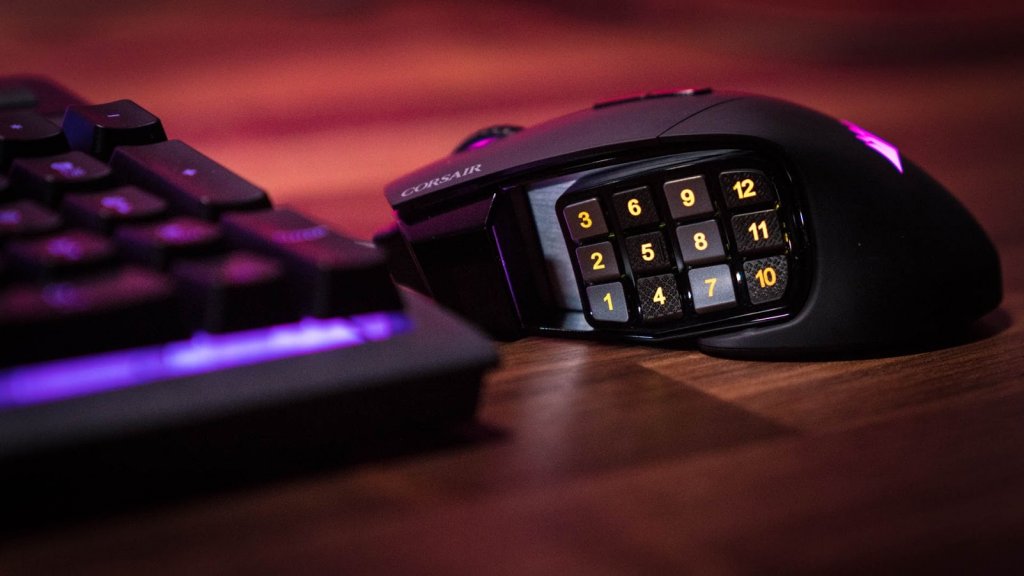 Why it’s good: The Scimitar Pro features what might be the best balance of button volume and functionality on the market, with a 10-button side pad which delivers clicky tactile feedback. It can be adjusted up to 16,000 DPI in ridiculous single DPI increments, and benefits from Corsair’s robust software suite.

Why it’s weird: There are a number of MMO-focused mice on this list, because designing a mouse with enough buttons to satisfy MMO players inspires some serious creativity. In the case of the Scimitar Pro, it results in the dual-textured side number pad that can be fully shifted forward or back to adjust to your hand size and comfort. 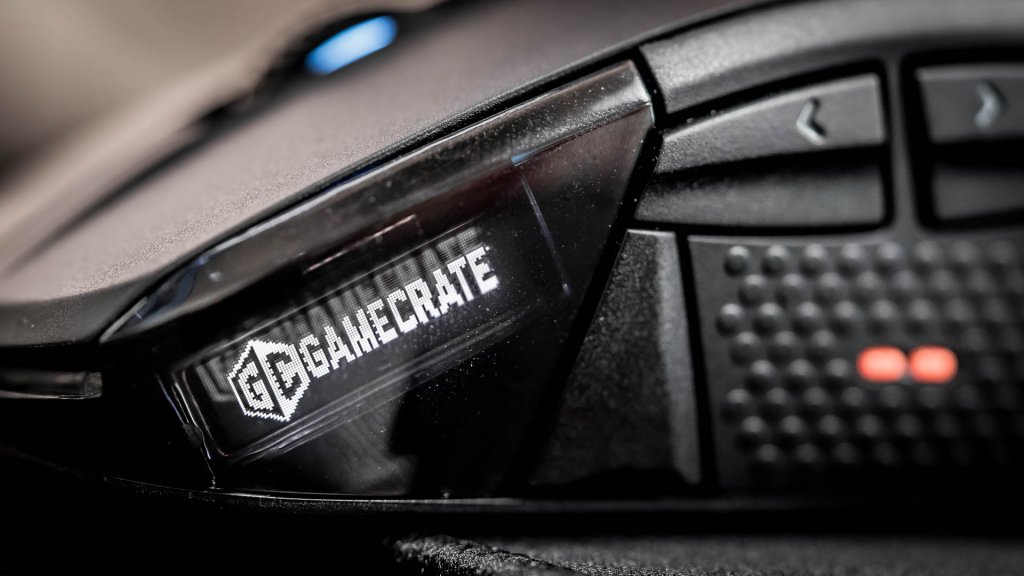 Why it’s good: SteelSeries has a reputation for making reliable gaming mice that are good enough for pro players, and the Rival 700 is no exception. It has one of the most middle-of-the-road shapes and sizes on this list, which makes it a good fit for a wide range of grip styles and hand sizes.

Why it’s weird: The Rival 700 has an OLED screen built into it, onto which you can put custom black and white images and even animated GIFs. It also has built-in tactile feedback options, and can buzz like a phone set to vibrate in response to certain customizable triggers. It’s basically the only mainstream mouse ever made with either of those features, and it has both of them in one single body. The fact that the Rival 700 also comes with two different cords that you can swap between, a shorter braided option and a longer non-braided one, feels like icing on a very strange, one-of-a-kind cake. 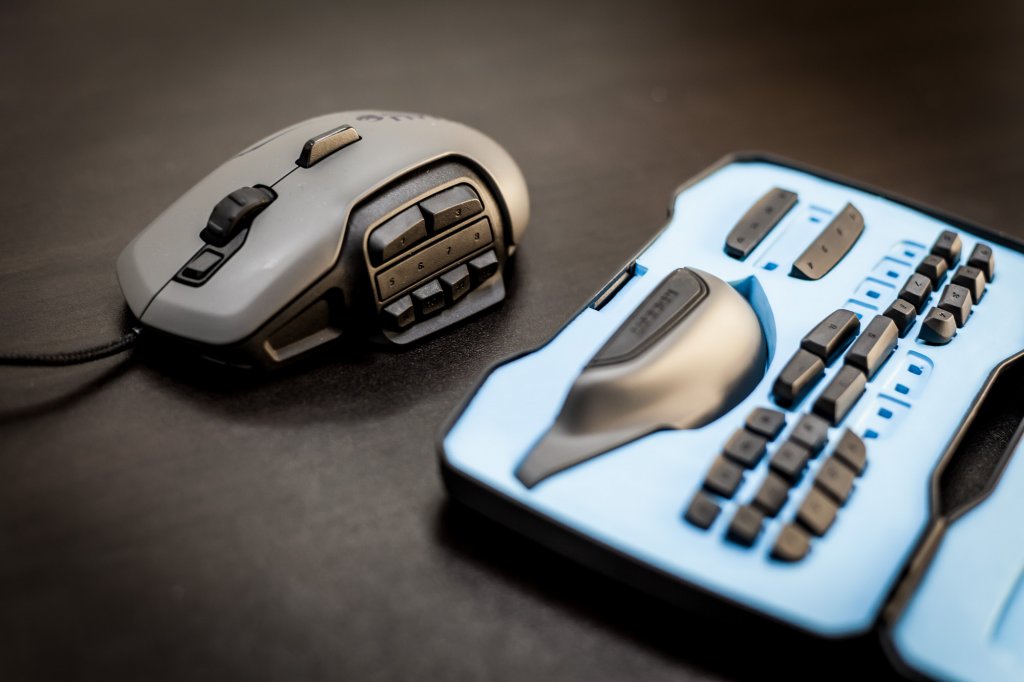 Why it’s good: Roccat mice are generally good choices for gamers with large hands, and the Nyth comes with an extendable side piece that basically turns it into a football you can use to play Apex Legends. It also has a robust and customizable side panel that can be configured to give the mouse up to 18 buttons.

Why it’s weird: The Nyzth comes with a dizzying collection of optional buttons of different sizes in a carrying case you can see in the photo above. It also supports 3D printed add-ons so you can make your own personalized buttons for the side panel, which makes the Nyth as weird and wild as your imagination. 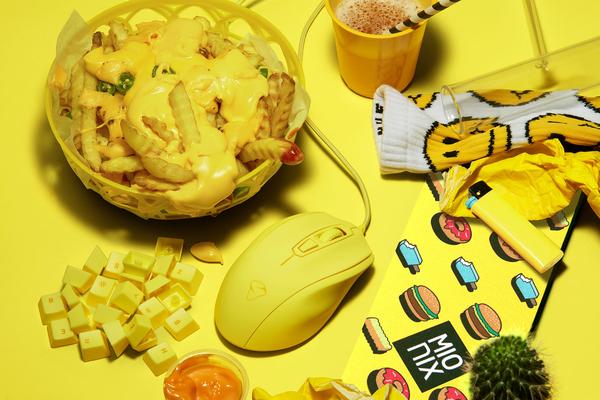 Why it’s good: The Mionix Castor is a good all-around mouse without a lot of bells or whistles. It has six programmable buttons and adjustable DPI up to 5000. It also has on-board memory to store your settings.

Why it’s weird: The Mionix Castor French Fries edition is extremely yellow. It’s the yellowest gaming mouse ever created. But it also comes in pink and blue if you prefer. 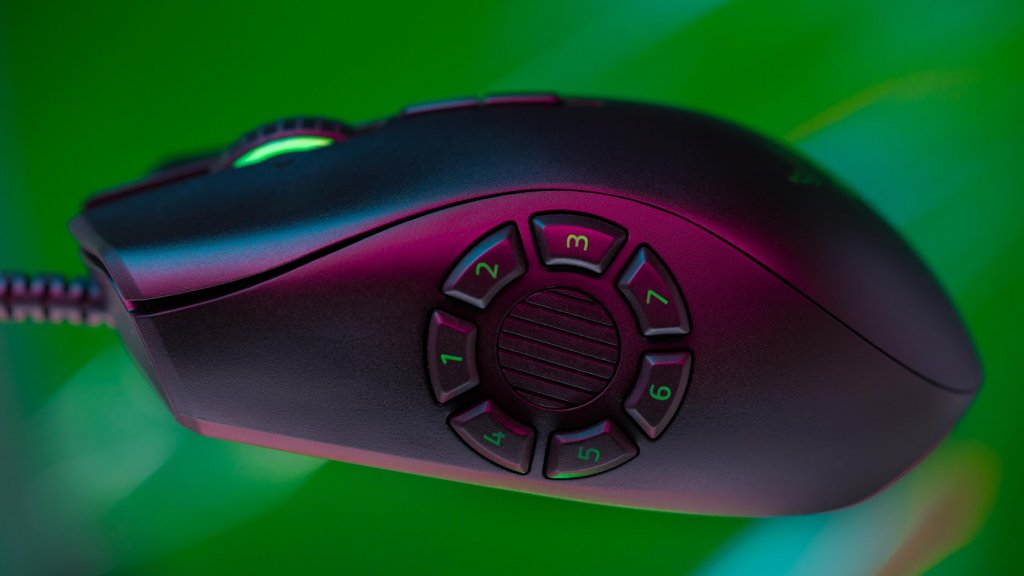 Why it’s good: The Razer Naga Trinity is almost three mice in one. It’s versatile and high performance, sporting up to 16000 DPI and light, clicky switches. The swappable side panels mean this mouse is an equally good choice for MMO and FPS fans, along with anyone in between.

Why it’s weird: The Naga Trinity comes with three side panels to choose from, featuring 2, 7, or 12 buttons. The 7 button option in particular is unorthodox, since it features the button arranged in a circular pattern, something that’s extremely rare in the world of gaming mice. Also: seven side buttons. That’s a weird number, right? 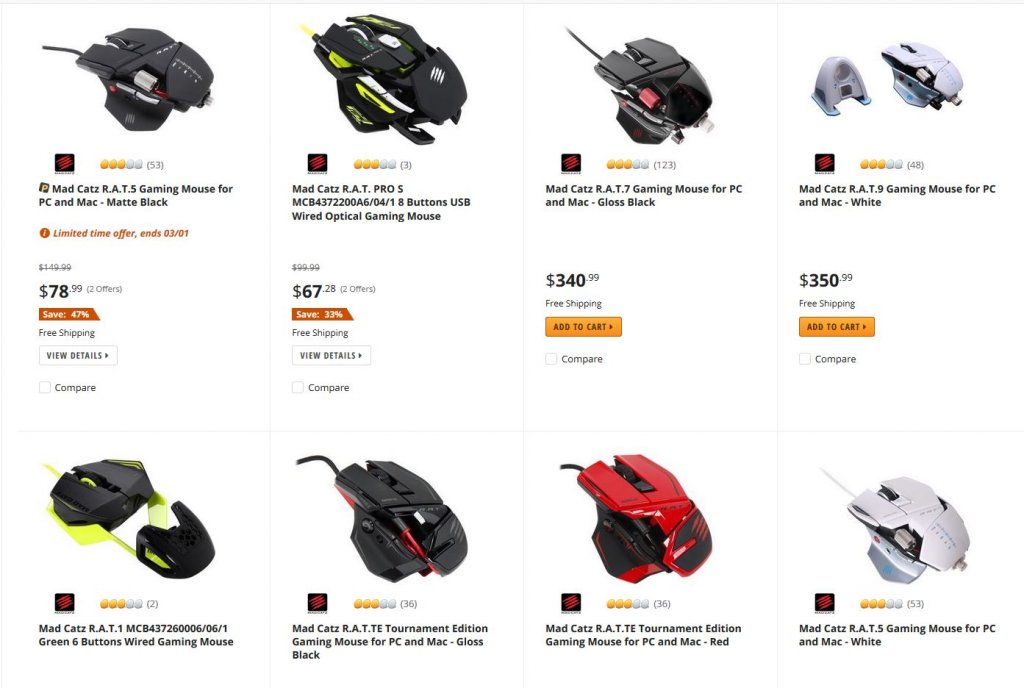 Why they are good: Oh gosh, Mad Catz. You were too weird to live, and too rare to die. Before the company bet their financial life on Rock Band and fell into bankruptcy, they were known for their fight sticks and some of the craziest and most customizable mice PC gaming has ever seen. Mad Catz was years ahead of the competition with their outside-the-box designs, producing mice that were intricately adjustable and laser focused on very particular types of gamers. Mad Catz has been quiet for a few years while slowly coming back to life, but many of their old models are still available on Newegg.

Why they are weird: Some Mad Catz mice have great big holes in the middle of their bodies. Others have adjustable lengths and strange scroll wheels you use with your thumb. And some are just visually overwhelming collections of facets and features that bring to mind the non-Euclidean geometries of an H.P. Lovecraft story. Their products even have strange names, like R.A.T., M.O.U.S., and S.T.R.I.K.E., which are written as acronyms but don’t actually stand for anything.

We here at Newegg Insider salute you, Mad Catz, the absolute king of weird gaming mice. PC gamers love customization and personality, and no one in the gaming mouse world has come close to claiming that throne since you left it vacant.