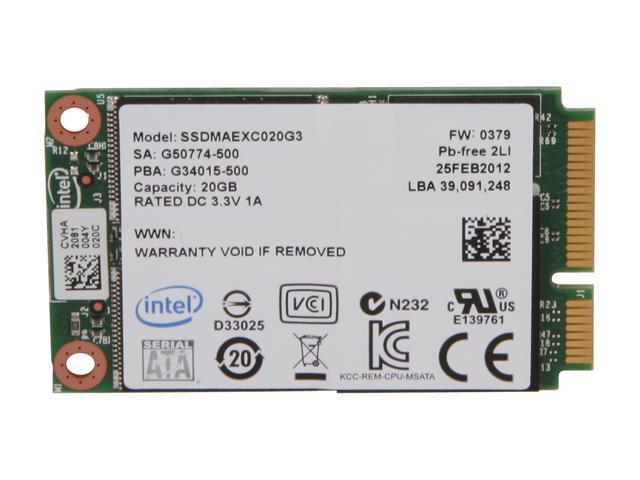 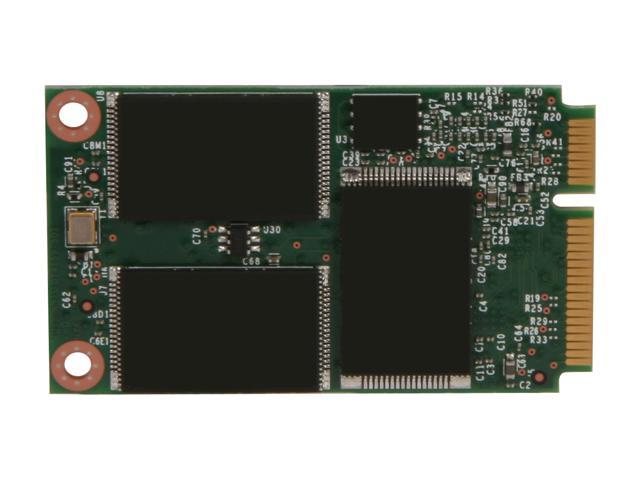 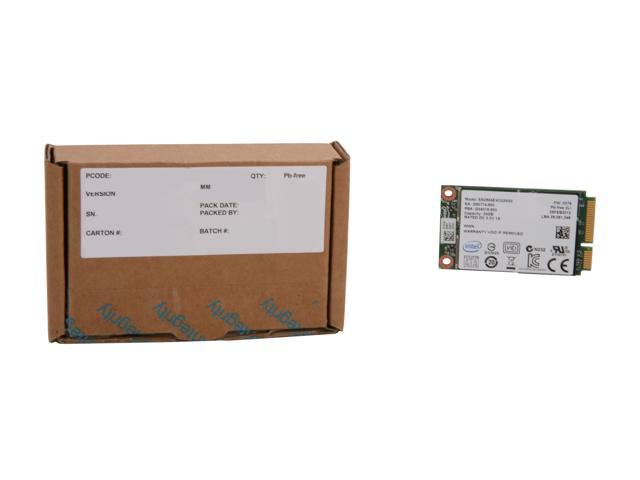 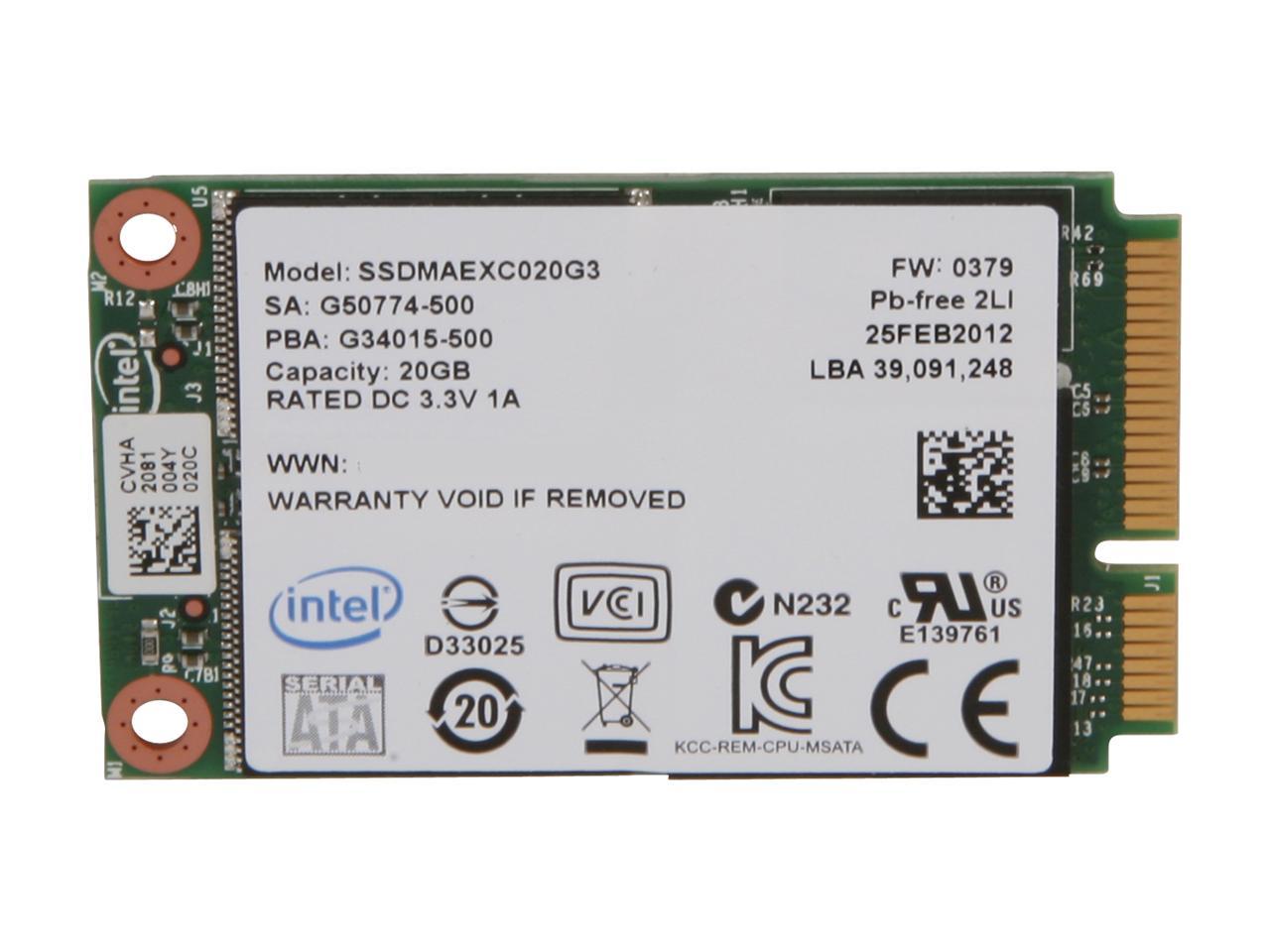 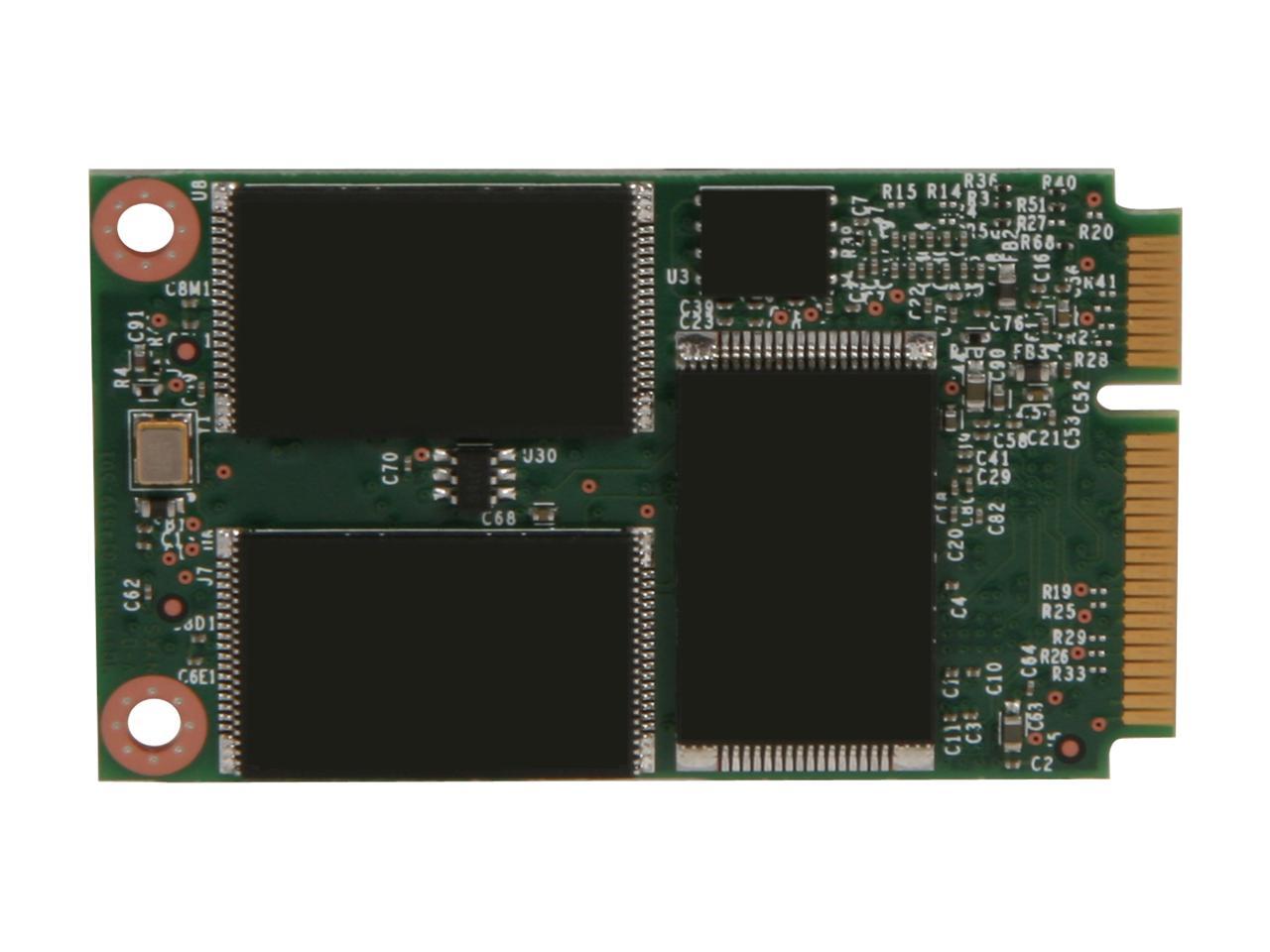 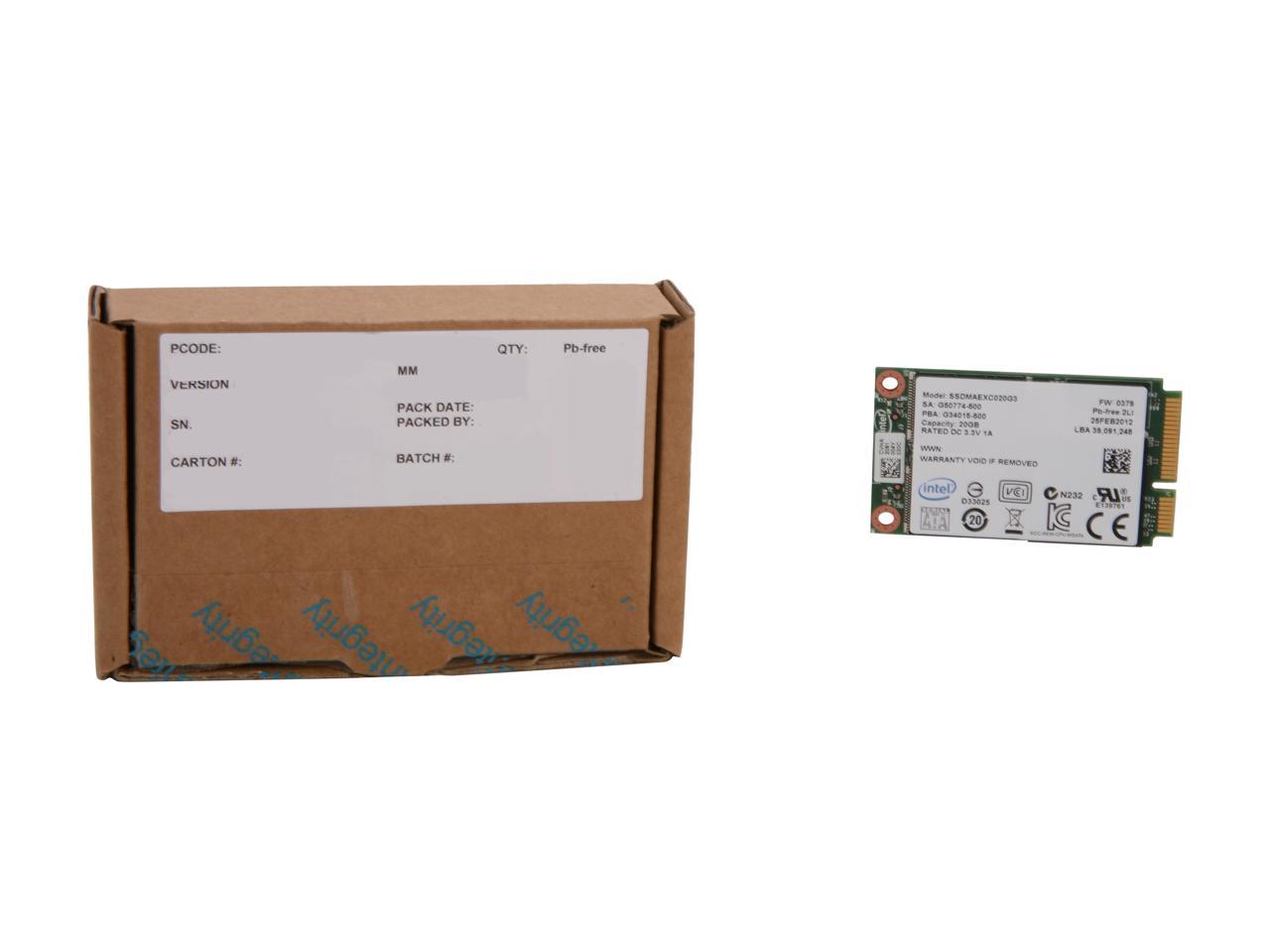 Optimize Ultrabook responsiveness with the Intel SSD 313 Series caching solution featuring Intel Smart Response Technology. A feature of the Intel Rapid Storage Technology, the Intel Smart Response Technology enhances storage I/O caching by moving frequently used blocks of disk information to an SSD, providing dramatically faster access to user data than the hard disk alone can provide. The end result: your PC can take full advantage of the hard drive capacity and receive a boost in boot times and application launches for faster overall system responsiveness similar to that of an SSD-only system. And because SSDs reduce spinning up of your hard drive, the Intel SSD 313 Series delivers high perfromance with low power. This means longer battery life without sacrificing performance.

Learn more about the Intel SSDMAEXC020G301

Pros: This is a single layer drive! And it's under 100 bucks! It won't suffer the dismally short lifetime of the Multi-layer solid state drives, it has much faster read times than all but the top notch MLC drives out right now. This would be a perfect second drive to run a couple applications or modern games from. Since it would last for many many years, you'd be able to carry it over with upgraded machines for the foreseeable future.

Cons: It has lower data density and slightly lower write times but this is the trade-off of Single Layer design. The longevity and higher read speeds than most MLCs more than make up for these shortcomings in many users applications.

Overall Review: This drive is suited to a different market than the MLC drives. If you're looking for the speed of a SDD, with the longevity of a mechanical drive, the SLC type drives are for you. If you are after ultra-high write speed and higher capacity and don't mind skimping on the read speed a little, and don't mind a shorter life drive, go for MLC. Please don't down-rate this drive without researching a little on the technology. Google "MLC vs SLC" to do some more in-depth reading on the subject.

Pros: SLC - which is effectively the Betamax of the Flash media market - is indeed up to 4 times faster and lasts up to 8 times longer(per cell) than MLC SSDs of the same capacity. If you want a 20GB mSATA SSD that will likely work for the next 5+ generations of SATA interface and MLC SSD speed increases while retaining the speed of SATA2 3Gb/s high-capacity MLC SSDs, then look no further. No, I'm not being sarcastic. This is it's only redeeming trait, so I'm making as big a point of it as I can.

Cons: mSATA, which uses one lane of PCIe 2.1 bandwidth, has a maximum data throughput of 495MB/s bidirectionally. This is effectively 250MB/s maximum read/write speed, which benchmarks confirm with 220MB/s read and 120MB/s write and 28k IOPS. To be perfectly honest, this is on par with my SATA3 7200 RPM HDD with exception to the 4K random. mSATA is a standard that will soon be left behind as there are no known plans to shift to the PCIe 3.0 or upcoming 4.0 standards. Why? Well, the consumer market for mSATA SSDs is rather niche and not interested in raw speed/performance overall. It's used primarily as an OS drive and left alone from there. Now let's talk SLC vs MLC, as I did google it to brush up on the topic. As I mentioned in the pros, SLC is like the Betamax of the Flash media industry. For those unaware, Betamax was analog magnetic tape media akin to VHS. However, it was higher density and thus able to store larger volumes of information which made Betamax movies look higher quality than VHS. Also, due to the higher density, they lasted longer and wouldn't deteriorate from recording to them repeatedly as quickly as VHS. So why was VHS pushed? It was cheaper, by far. Betamax sales couldn't compete with the cheaper VHS alternative since most consumers didn't know the difference. Same thing is happening with SLC vs MLC. Yes, SLC is better in every way than MLC with one exception: Unlike the Betamax reference, SLC is LOWER capacity than MLC, by 1/4th to be specific. This makes making high capacity SSDs using SLC impossible. This also makes the cost per GB four times what MLC costs. Hence the price tag on this. This SSD has been benchmarked, and while it comes close to an equally priced high-end SATA2 3Gb/s 120GB MLC SSD in all aspects of performance, it doesn't surpass it in any way other than how long it will last. While your average MLC SSD with a properly configured OS (google OS SSD optimization) will likely last 5-10 years depending on how many writes done to it, this will last 25+ years in all likelyhood. Now seriously, who needs a 20GB mSATA SSD to last THAT long? Especially considering how many revisions of interface and jumps in capacity we'll have had in that time. 5-10 years for an MLC SSD is plenty, and just in time for the next major revision.

Overall Review: While I hate not supporting a "better" standard, the SLC vs MLC battle does in fact go in favor of MLC. The fact of the matter is that while SLC lasts for more write cycles than MLC, and reads/writes faster physically; these pros don't outweigh the cons of being 1/4th the capacity by physical volume, and four times the cost per digital volume. Also consider the fact than most MLC SSDs are programed to spread their writes across the cells evenly, trying to make the cells last as long as possible. Because of that, the same 20GB of this would see 6 writes per cell compared to one write per cell of a 120GB MLC SSD, and already we've cut the life expectancy of SLC by more than half compared to MLC. Top it off with the fact there is functionality being developed that will make flash cell life expectancy infinite. Anyone who can't consider all of the above in unison shouldn't be claiming "Very High" tech level while singing the praises or lamenting this SSD's existence. It's bad enough seeing how many people thought that the review by Psycho0124 was helpful when it sounds like an advertizement or sales pitch as opposed to an actual critical review. Mike's review was actually informative and provided real-world experience. It even shows him as a verified owner having bought this here on Newegg. Yet his is voted into the ground. This isn't youtube people. Criticism is a good thing here as it lets people who are looking to spend their money make an informed choice based on the pros and cons provided in everyone's experience. If someone offers unique information, positive or negative, it should be voted up. Redundant reviews or lack of information, should be voted down.

Cons: Very slow reads and writes. Expensive on a per Gb basis.

Overall Review: If you plan to use this as a cache on your motherboard save your money and just buy a good SSD. This is a slow card and you won't gain much.