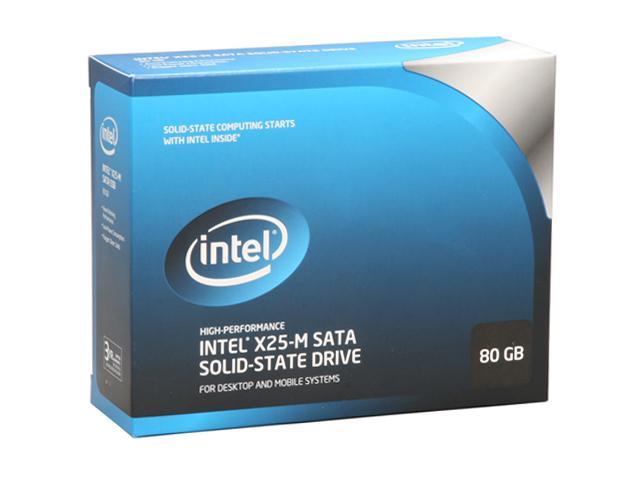 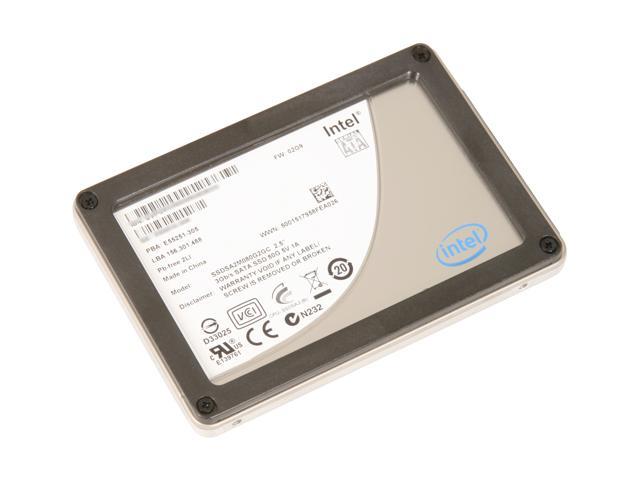 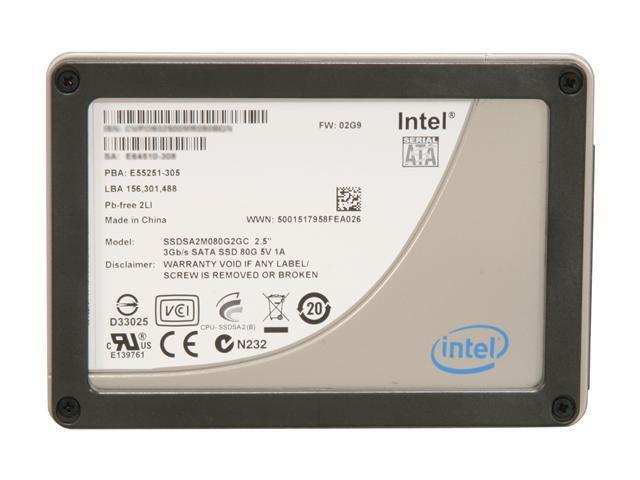 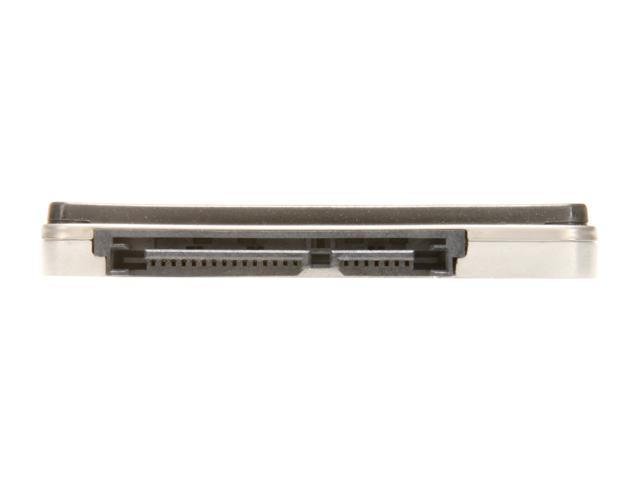 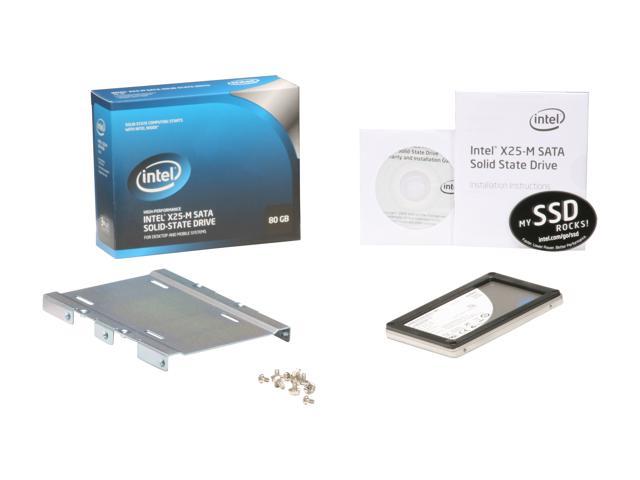 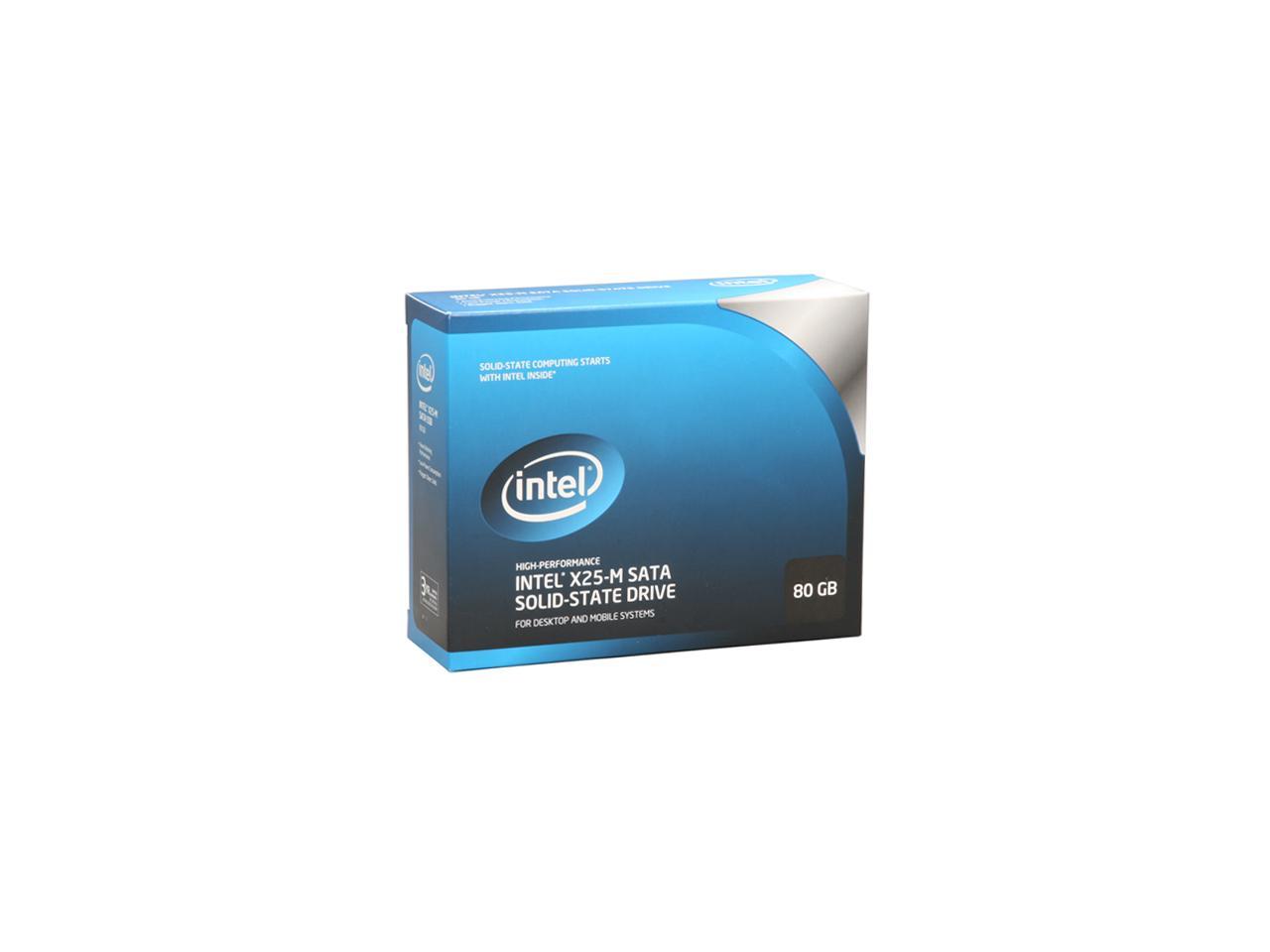 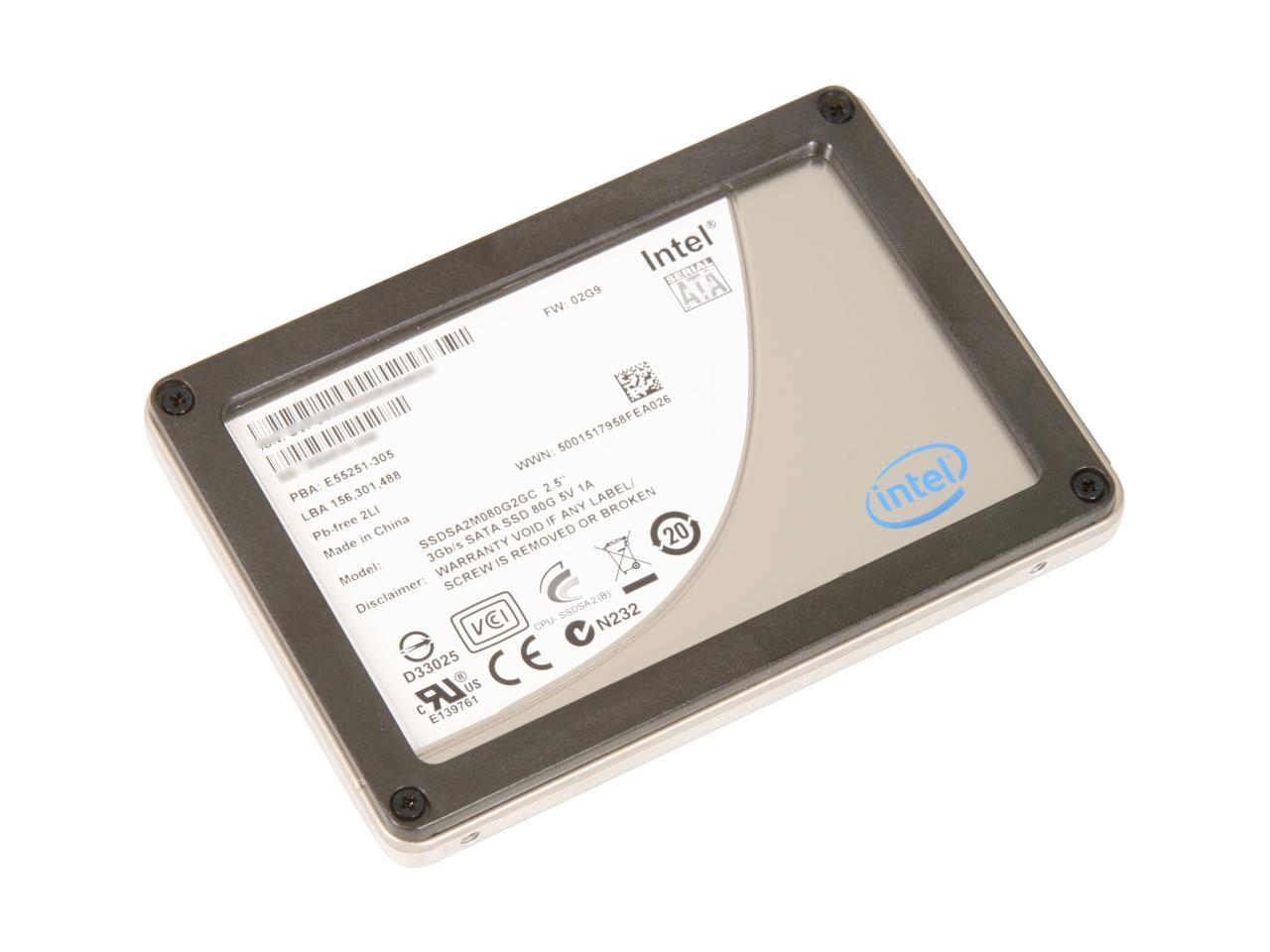 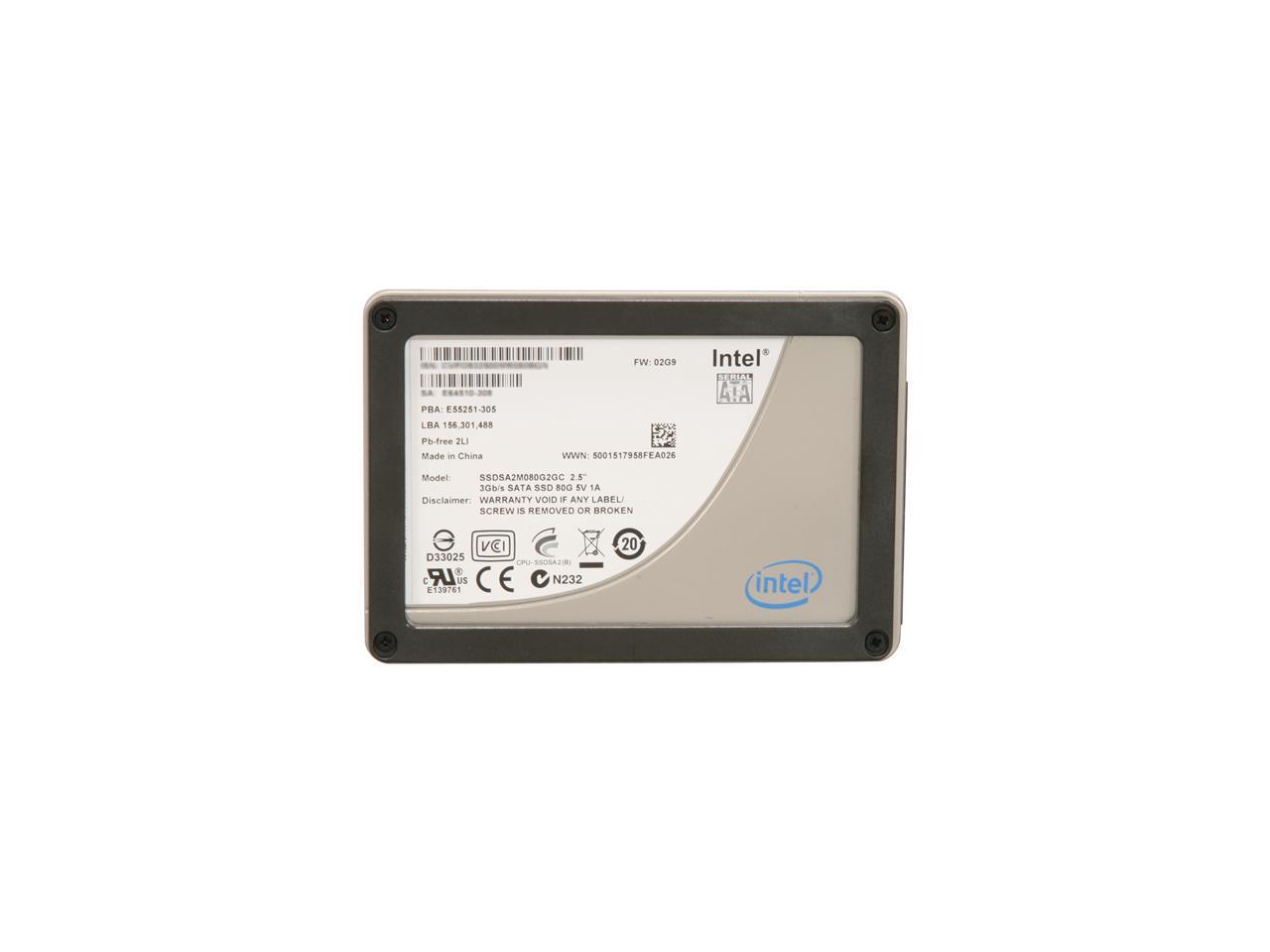 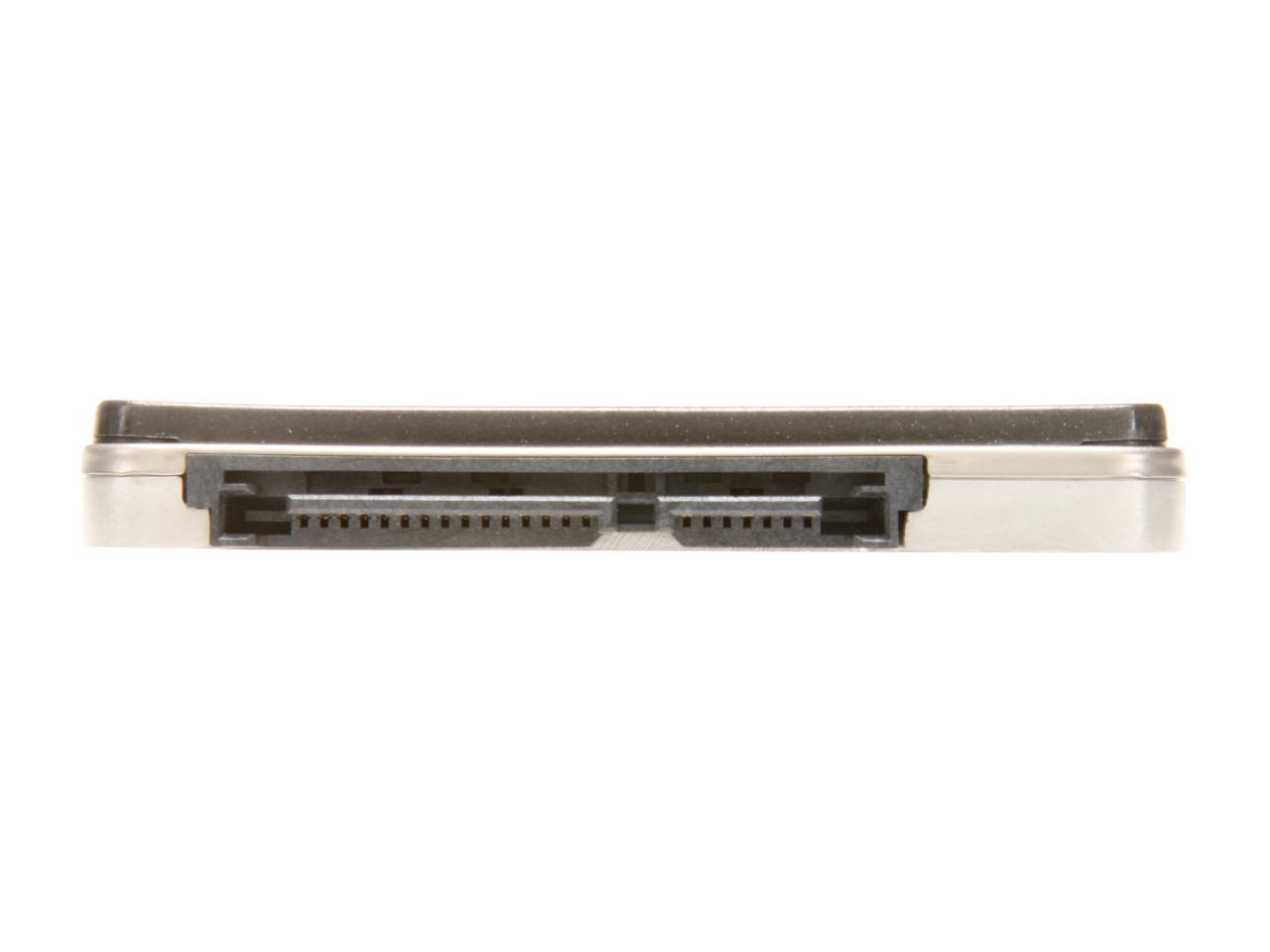 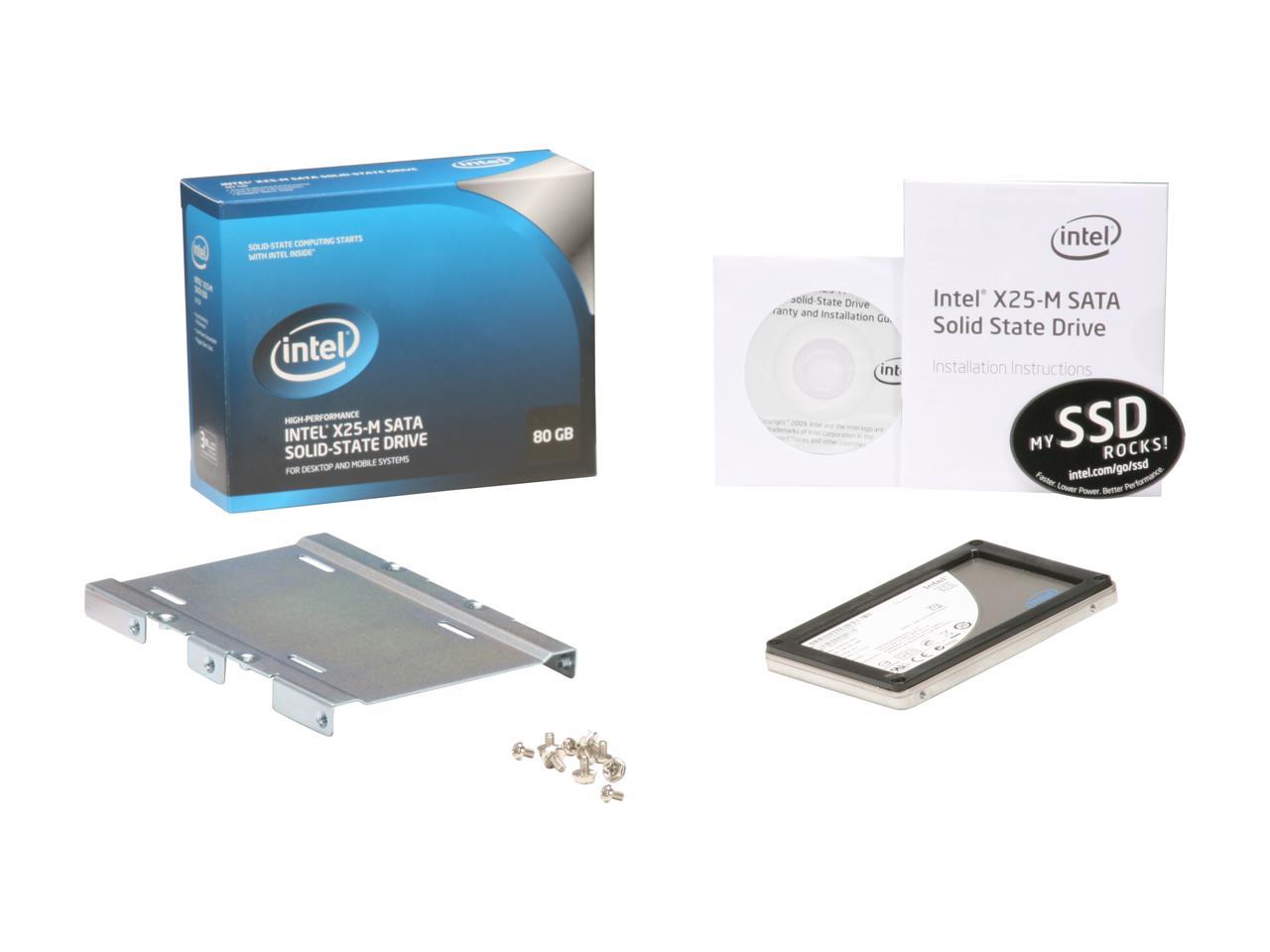 (334) Write a Review
OUT OF STOCK.
Overview
Specs
Reviews
Why wait when you can get more accomplished with a solid state drive by Intel?
Say goodbye to long load times and cold system boots. This Intel SSD makes sure you get where you need to go fast. Since there are no moving parts, there's no need to wait for platters to spin and less worry that a mechanical piece will fail. Average sequential read speeds are 250MB/s and write speeds are 70MB/s. You won't have time to leave your desk next time you have to move over a large file. With 80GBs of space, you'll have plenty of room to store your important programs for the fastest performance you'll ever experience.

Learn more about the Intel SSDSA2MH080G2R5

Cons: TRIM support only works for these if they are not part of a RAID array, same goes for Intel's SSD utility. It WILL slow down over several weeks if TRIM is not enabled/available and you do not take other measures (see Other thoughts below) You need to make sure you have the latest firmware flashed on the drive before, or at least the one that supports TRIM. The ones being shipped now most likely have it though. To get the most out of it you should take care to set the OS options correctly. Win 7 should set them automatically, but check anyway, eg. do NOT have defrag set on, and turn off search indexing on the SSD, also set superfetch off. sevenforums.com and many sites have guides on this stuff. Not sure about OS X, but XP doesn't support TRIM. Can't say if Vista does - I went from XP to 7 and skipped Vista :) PRICE! (but the performance gain is worth it, so price per GB is terrible compared to regular drives, but it's still the best bang for the buck compared to other upgr

Overall Review: I ran benchmarks today, and as expected there was a performance degradation since I installed my OS, which was two months ago. It was not due to all the new programs or extra processes running in the background, although that was part of it. Slowdown was due to lack of TRIM support in RAID (other drives on the system can be RAIDed and TRIM will still work on non-RAID SSDs) Decrease in throughput was around 30%, so I used the same trick I used to use with my OCZ Solid 60GB, which is to run CCleaner with the Wipe Free Space option enabled and secure file deletion set to 1-pass (this writes zeroes to the "empty" parts of the drive, which is what we want). I seem to remember someone saying this is detrimental, but I doubt it would be because of one write operation, as SSD cells allow hundreds of thousands of writes. After I used CCleaner, performance returned to almost like new and I got the results above. I keep important data (and backups) on regular drives, not the SSD RAID 0

Pros: Read speeds pushing the 270 [mb/s] mark on my standalone drive. Trim is now in firmware. Photoshop opens in 2 seconds. I took the leap and glad I did.

Cons: Not really a con, but price is high for the casual user.

Overall Review: As this posting, Intel has not yet implemented Trim in drivers for raid arrays. If you just use your system to surf the web or email, this isn't a must have. Win7 & Vista detect and support proper alignment on ssds. If you are using this as a boot drive for XP, you need to jump thru some hoops, as XP doesn't align correctly to ssds. Just google "xp ssd alignment" and this will direct you to the proper procedure for installing xp on a ssd.

Cons: Would have to say price but Intel is usually not associated with budget prices. Don't mind paying premium price for good stuff. I saw the price drop $75 from $299 so I pulled the trigger. Glad I did.......been wanting one for a while.

Overall Review: You get a cool sticker so you can proclaim that your SSD rocks. BTW .......Don't forget to disable automatic disk defrag! Running this with a Intel i7 860 and ASUS Maximus Gene III.

Pros: Bought this to replace a slow as snot 5400 RPM drive in the wife's laptop. Installed in about 35 minutes total, and that includes time to Ghost over the old hard drive image from an external drive. Boots WinXP in about 30 seconds. Computer no longer crippled during virus scan. Can open a folder of thousands of thumbnail images, no problem. Best single computer upgrade I have ever made. Frankly, better than buying a new laptop.

Cons: I want an SSD for my macbook.

Pros: Performs as advertised. I'm sure anyone buying one of these or any SSD has done proper research and read up. Glad I paid the extra $$$ and got the Intel. Other brands seem to be catching up but overall you can't go wrong with this G2 drive. As of March 2010 I had to update to the newest firmware.

Cons: Price. Once everything was installed and setup it doesn't really blow your mind the way others say. I can understand if you're dropping this into an older laptop the performance increase would be out the roof. I was putting this in a Core i7 / X58 desktop running on a WD Black 750GB HDD... no RAID. Everyday computing is still the same experience but now I'm out some serious cash. For most semi up to date desktops, I'd consider putting your upgrade dollars in other places until prices drop.

Overall Review: Installed into a Core i7 920 / X58 / 6GB DDR3 / GTX 260 system with Win 7 64 Home Premium. Windows installed in 15 minutes. Office and other various apps also installed with the quickness. As you may of read elsewhere real world game performance isn't really impacted much. Apps like Photoshop / Office open in the blink of an eye though. Windows boots up in under 30 seconds.

Pros: Very fast - obviously silent - has TRIM support through Intel toolbox (although not in RAID yet...). Comes with mounting brackets/adapter for a 3.5 bay unlike everyone else. Benchmarks very nicely - and I run Win7 x64 with WoW on the main drive and everything else on my RAID array.

Cons: Small capacity - but I knew what I was buying size wise. Cost wise - you get what you pay for. In retrospect, should have bought the smaller version and used it just as a boot volume and then a second larger one for programs, but money isn't infinite in my universe.

Cons: It's $200 for only 80gb. Best to use this as basically your boot drive and maybe store a game or two.

Overall Review: If you use Steam, you can keep your Steam folder on the SSD and use SymbolicLink to split the drives in which you store your games (search the Steam forums for more info). So you can keep a majority on a regular SATA HDD and only a few games on the SSD.

Cons: $ per GB Write is slower than my RAID array, though for responsiveness, read speed is all that really matters.