Sold and shipped by: UP UP

Purchases from these Sellers are generally covered under our Newegg Marketplace Guarantee.
Sold and shipped by: UPContact Seller
Ships from Hong Kong.
Price Alert
Add To List 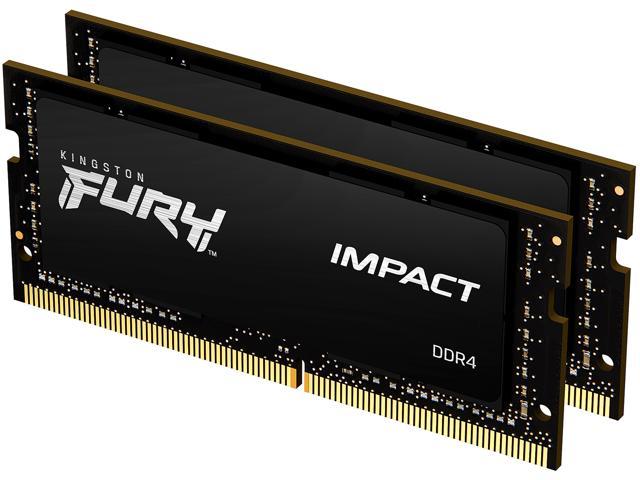 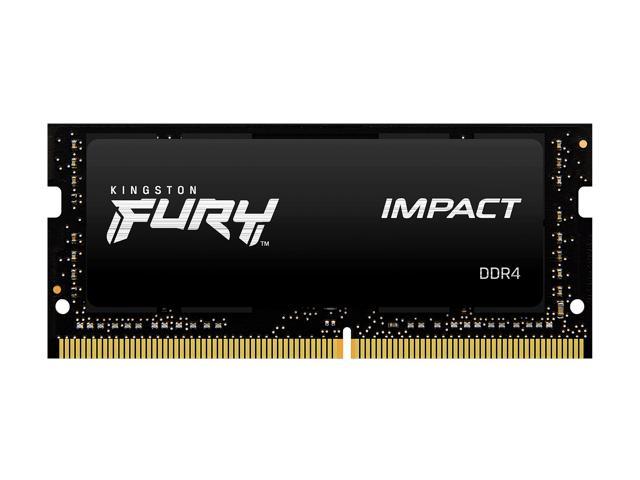 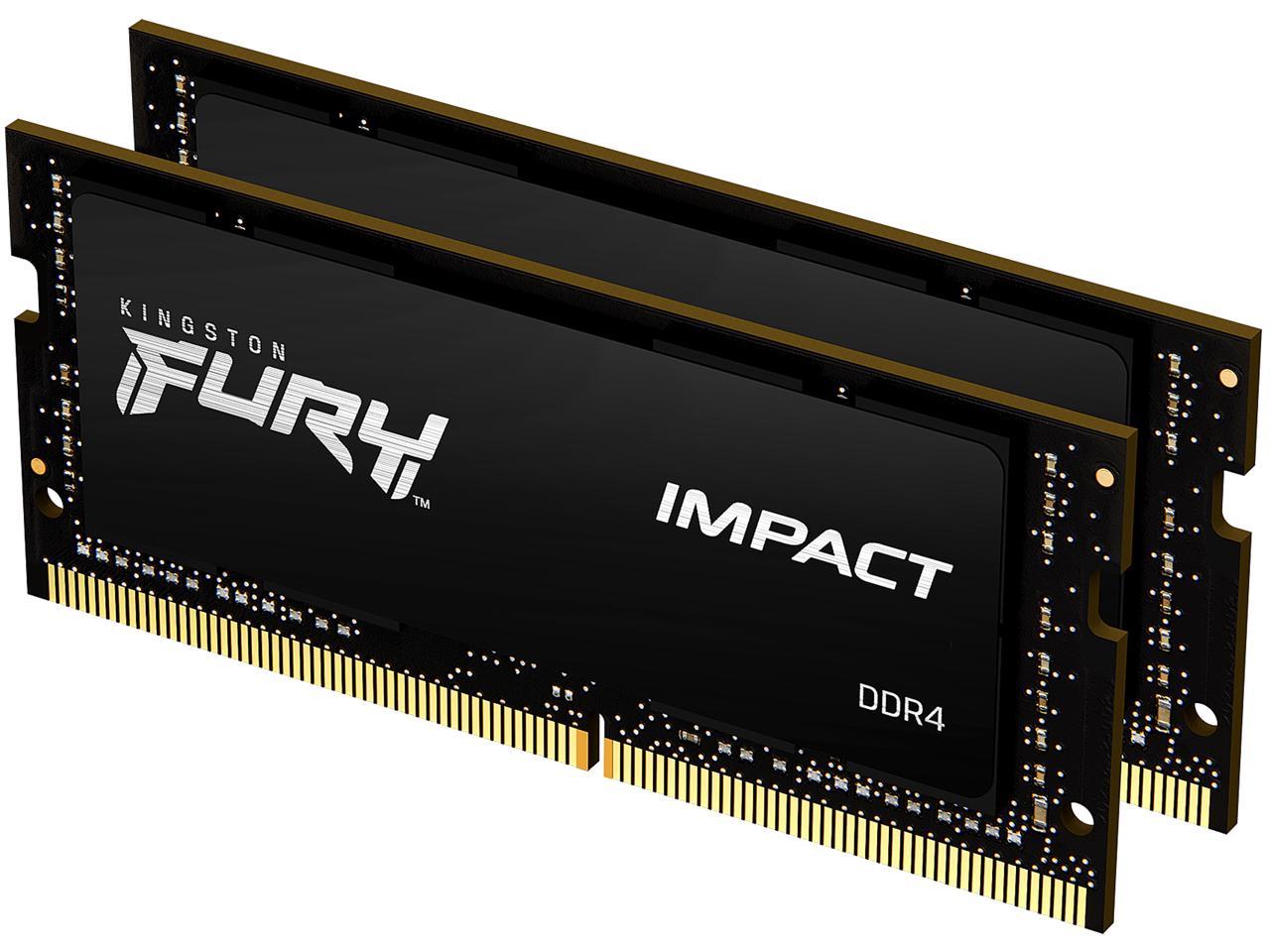 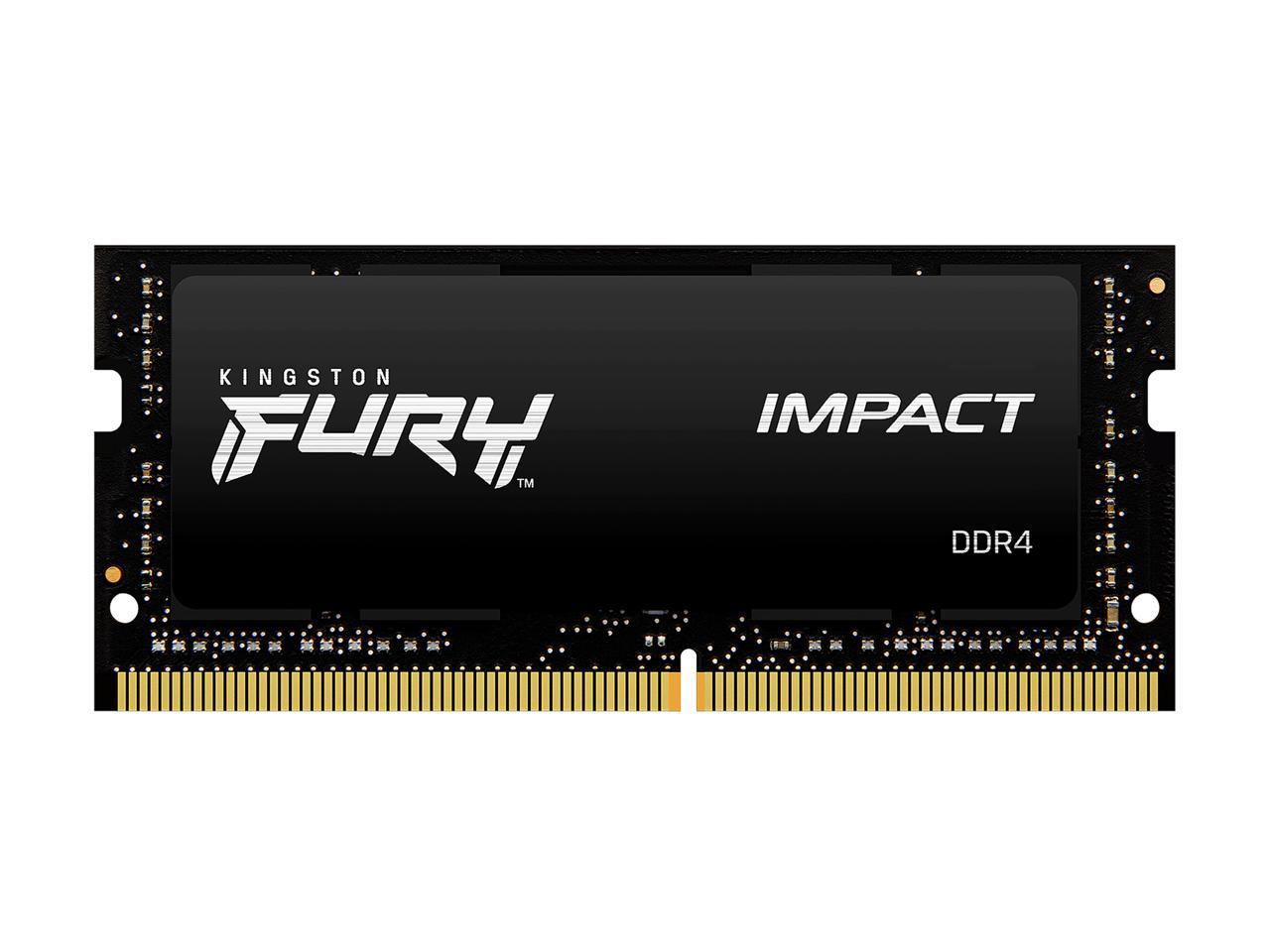 Kingston FURY Impact DDR4 is small on size and big on performance, making upgrading your notebook and small form factor devices effortless. It supports Plug N Play automatic overclocking1 and is XMP ready. You can make the most out of your day.

Maximize your memory and get a boost to your gaming, multitasking, and rendering.

Impact DDR4 automatically overclocks itself to the highest published frequency.

Designed to maximize the performance of our memory modules our engineers have predefined Intel Extreme Memory Profiles to reach speeds up to 3200MHz.

Get memory that’s Ready for AMD Ryzen and will seamlessly integrate with your AMD-based SODIMM-compatible system. A reliable, compatible performance boost for your build.

Pros: Low CAS latency and high speeds at JEDEC not XMP which is very beneficial for some laptops.

Overall Review: I recommend this product for anyone who got stuck with the infamous X16 memory modules from Samsung. I put this in my son's Alienware M15 R5 laptop that is equipped with a 5800H and RTX 3070. Aida 64 benches improved dramatically! 15-20% in memory reads and writes. Latency was about the same.

Pros: *System was able to recognize this RAM and run it on the advertised speeds of 3200Mhz CL20 without any tweaking unlike other RAMs where even though it advertises a higher speed, you have to tweak it first to get there. Some machines doesn't even let you tweak so you end up wasting money getting higher speed RAMs. *Dual ranks

Cons: *It further went down in price after I just bought it. 😭

Overall Review: I have this installed on a new mini PC (minisforum HX90) running at 3200Mhz CL20 dual rank! Benchmark scores is much higher with these RAMs compared to the reviews of the HX90 online running stock RAMs.

Overall Review: I purchased this product for my ASUS TUF F17 Gaming Laptop to replace the 16gb of RAM that came included with that product. The Kingston Fury 32gb of RAM was easy enough to install with an immediate difference being visible in my laptop performance! Would recommend to a friend!

Pros: Great laptop ram for my AMD CPU laptop. Its also dual ranked which is a plus

Cons: Cant think of one

Overall Review: Great product. Its basically the Hyperx but rebranded

Pros: Did not try it as it was the wrong part number ordered. According to the the received part number this RAM is HX32S16IB2/16 The HX means it is an older Hyper X product line, 32 for 3200 speed, S for SODIMM, 16 for CAS Latency, I for Impact series, B for black heat spreader, 2 for 2nd revision, and a K if it were a kit followed with the # of modules, then 16 which is the total capacity of the RAM. The label indicated each stick was 1.2 volts

Cons: According to Kingston's data, a search would bring up nothing on the part number that was received. I checked the old Hyper X page and found many others. The most similar that rivaled this RAM were single rank modules, but I could not verify this since the Kingston website search can not find the part number that I received. I believe I was sent 2 single rank sticks that were not a dual channel kit.

Overall Review: I did not try the RAM delivered and opted to return it. It's on it's way back. After all the searching for a 32gb(2x16) kit with low latency for a Legion 5, there were no memory kits with a latency of 16 AND 1.2 volts. I may have missed out on keeping these sticks if they were double rank because I sent them back, but after reading many forums and reviews I doubt the speed would be 3200 if they would work. The part number KF432S20IB1K2/32 on this listing is what I ordered and determined from other resources to work as dual channel kit with dual rank modules in a Legion 5

Manufacturer Response:
Thanks for sharing your issues with us. Please reach out to our Kingston Customer Support Team at https://www.kingston.com/unitedstates/us/support. We will do the best we can to help.
Anonymous
Ownership: 1 week to 1 month
Verified Owner
Good upgrade2/4/2022 12:57:02 PM

Pros: RAM does what it states it would. Not a whole lot of options for low CAS at 3200 MHz while considering I have a non-XMP PC to put these in. Benchmark tests are similar or slightly better than what it replaced, which was great but "only" 16 GB. I got the dual rank version.

Overall Review: Buy it if you can't overclock your RAM or just don't want to.