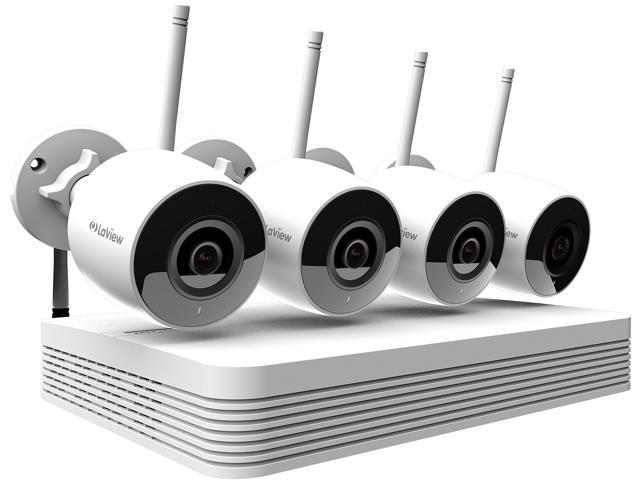 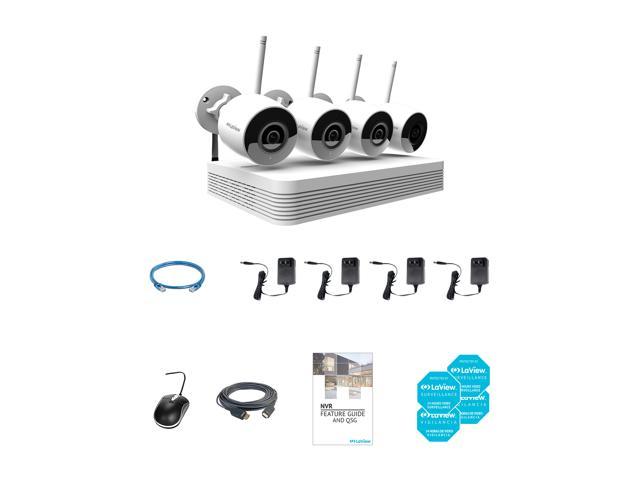 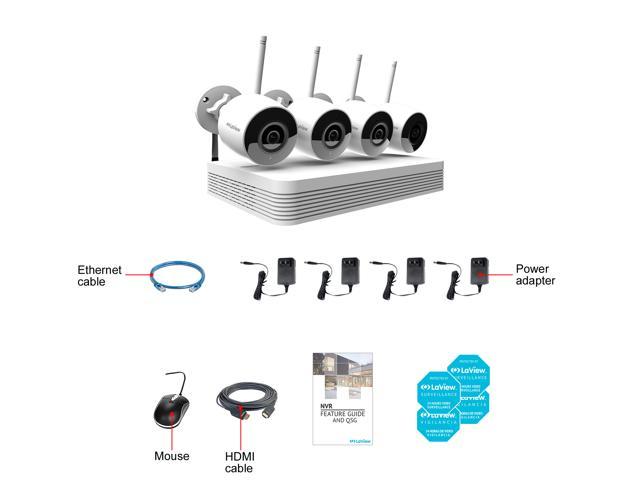 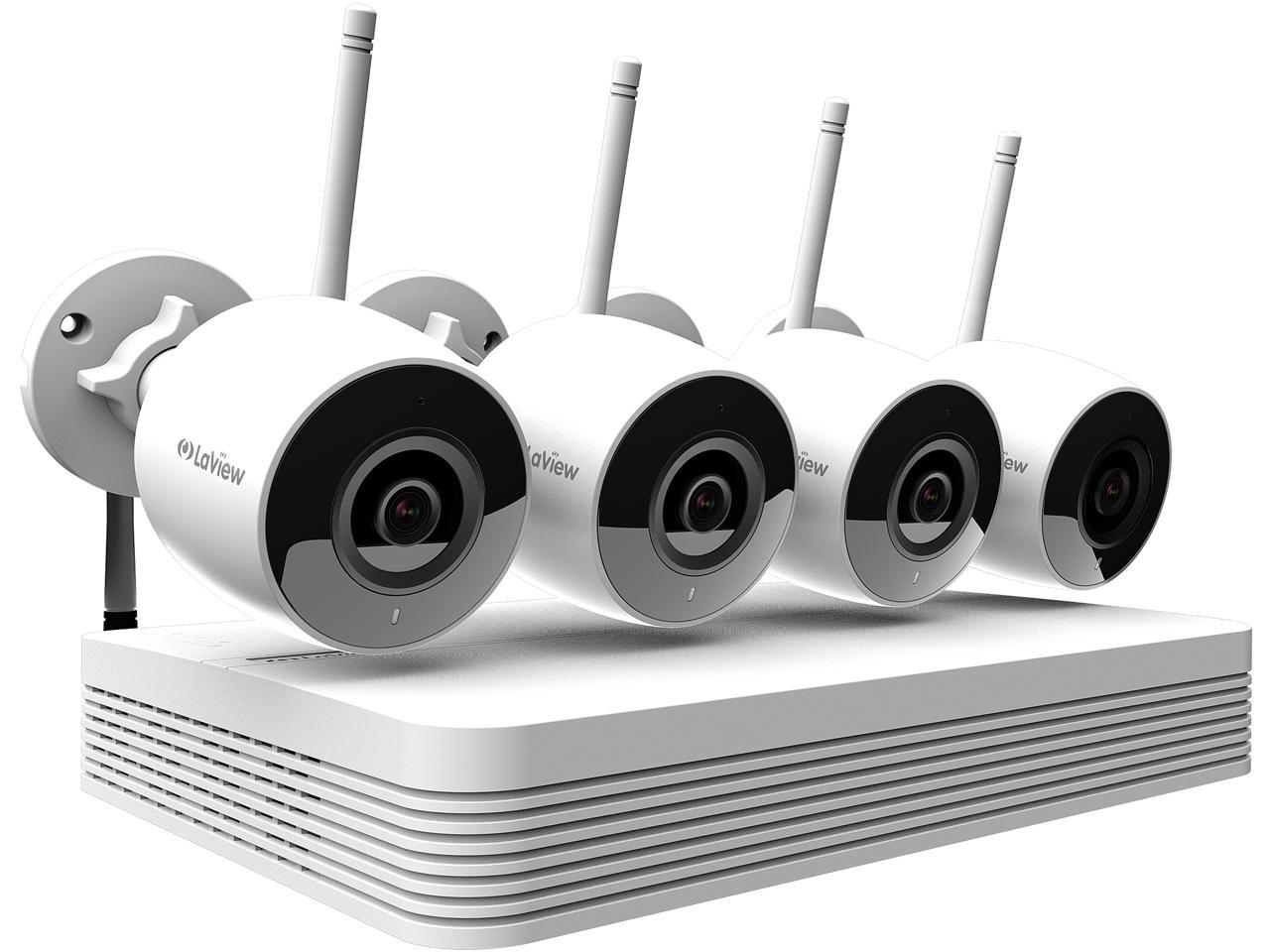 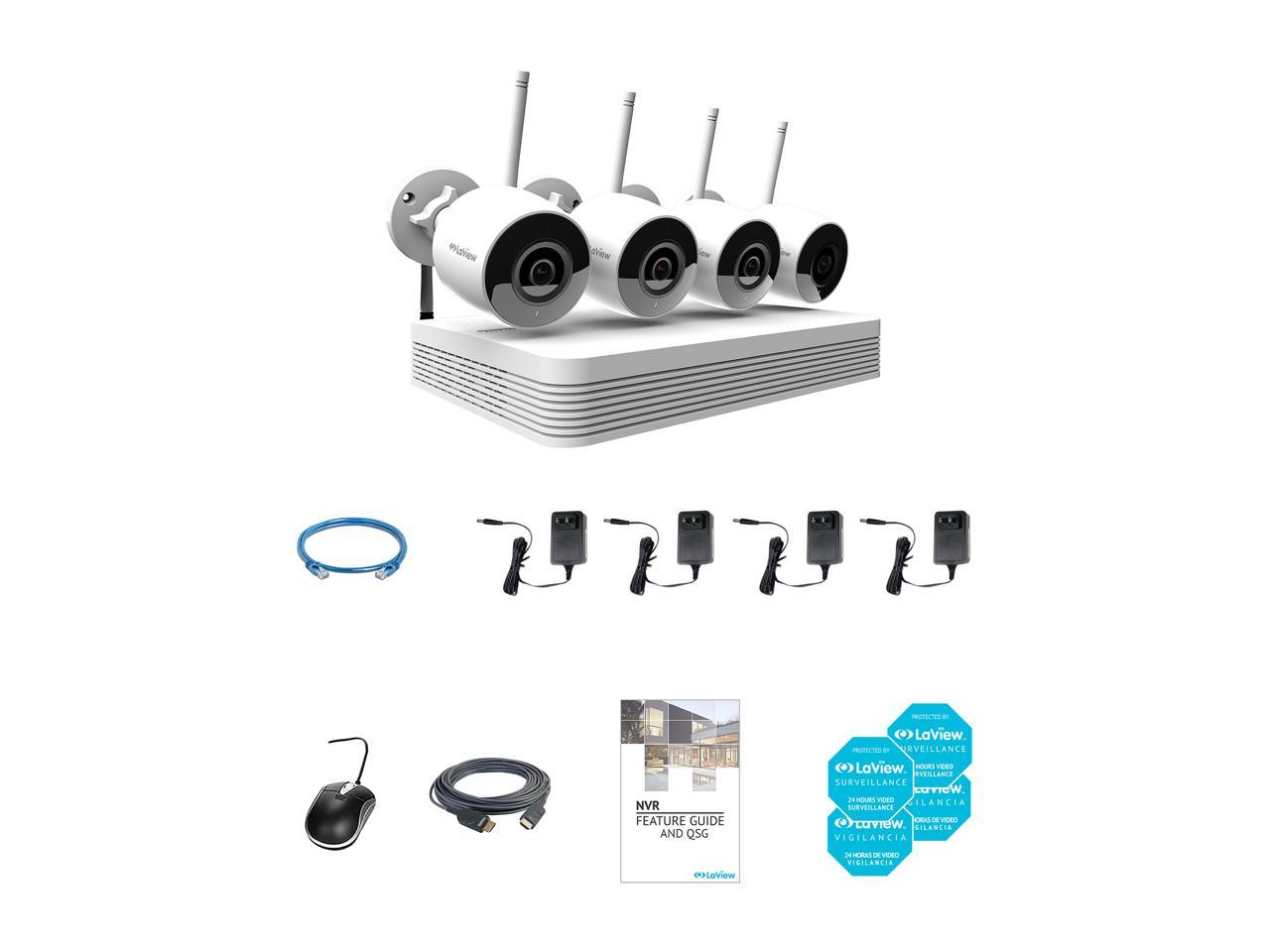 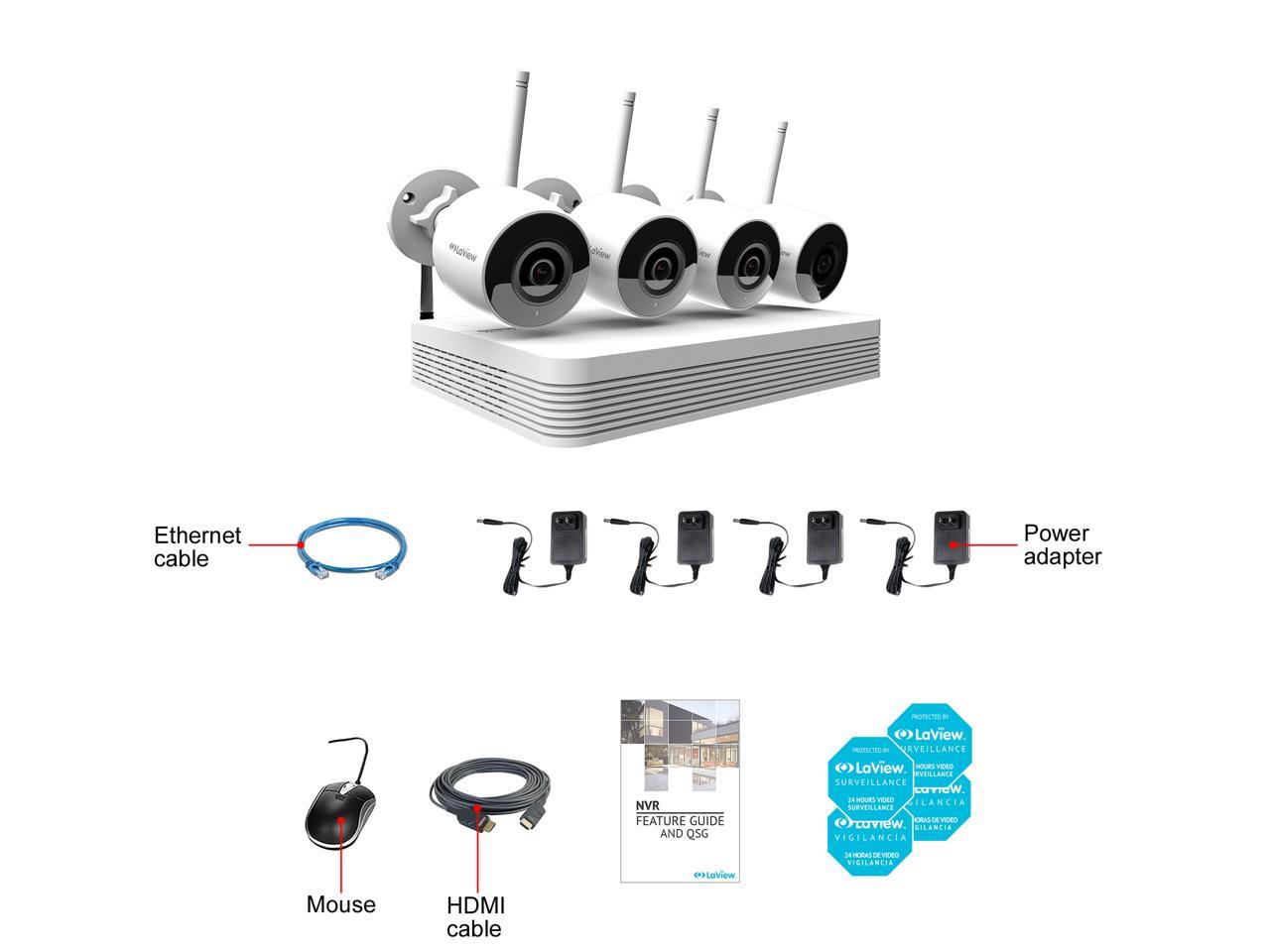 Installing WiFi camera is easy as 1, 2, 3! Just plug in the power, download the app, and run the easy setup guide to connect to your Wi-Fi. In an open area, the cameras are capable of reaching up to 150 meters over Wi-Fi, roughly 30 meters longer than a professional soccer field. Stay wire-free with the WiFi system. Unlike other systems that require cables to be run directly into your NVR, the WiFi system eliminates your dependency on data cables and streamlines the whole process for you! This brings an extra level of simplicity to your DIY surveillance experience. Feel Secure, Even When It’s Too Dark

Pierce the night with 1080p clarity, up to 100ft in night vision in 90° field of view. The night vision technology also helps you capture details even when the human eye cannot. Monitor your property 24/7 in 1920x1080 resolution that will capture all the information that matters to you most. Listen in on Your Surroundings

Expand your security coverage beyond the cameras’ field of view with built-in microphones to record their surroundings. All cameras are audio capable and can record directly onto your NVR. Listen in to the past and present at a touch of your finger. Do More with Less

The boosted H.265+ compression technology saves storage space on your hard drive while preserving every pristine detail of your high resolution footage. Record continuously, on a customized schedule or with motion detection. No need to reset the drive or worry about upgrades - for your convenience, the system will automatically overwrite older footage when full for hassle-free upkeep. Be the Master of Your Property

Use the fully customizable motion detection to personalize each camera, so that you can receive push notifications from LaView’s free mobile app when motion is detected. Trust your mobile devices to let you know when there’s any suspicious activities that may require your attention at no additional cost to you! Rated IP67, the operating temperature can go as low as -22°F and up to 140°F. These weatherproof cameras are capable of withstanding any winter snowstorms or heavy rainfall as well as the summer heat without hindering your capture quality. Place them indoors to keep an eye on your belongings, or place them outdoors to keep a watchful eye surrounding your property. Quickly find specific footage you want to view with Smart Search. This feature included in your NVR will assist you in locating any particular recordings out of countless others. The feature can recognize individual behaviors from general movements to missing objects in the camera’s field of view. All of the Above, in One Single App

Enjoy your new window into your home even while on the go, 24/7 with the free mobile app - LaView Net. With no hidden fees or monthly fees, you are in control of your own property. Download it free from Apple Store or Google Play today.

Cons: Even though it came with everything to get the system up and going, with good instruction it was still a little bit of a problem to do. I guess the old saying is true, "nothing is as easy as it looks". I eventually had to call Laview to get a few things solved.

Overall Review: This is a very good system and I surely recommend it. Even though I had to call support which was very good to work with and stayed with me until the problem was solved. Very Pleased.

4 out of 4 people found this review helpful. Did you?
Anonymous
Ownership: 1 month to 1 year
Verified Owner
Great product; ridiculously difficult set up1/21/2020 7:05:10 AM

Pros: Excellent range for what we needed Excellent "night-vision" images Pretty easy to navigate the software

Cons: Ridiculously difficult to connect the cameras to the NVR. Need to rewrite the user manual & take the user through the entire process from taking it out of the box to going live; manual just doesn't flow. We're not computer-illiterate by any means, but this was a challenge.

Overall Review: I would recommend this product to others Great value for the money Wish I could give it 5 eggs, but the camera set-up prevents that.

Cons: After establishing the new Wi-Fi network between the four cameras and the NVR, I had very serious connection issues between the NVR and my LAN router... could not establish a reliable link. Over a period of three days two different LaView techs (located in India) remotely accessed my system and could not resolve these issues, determining that my NVR had an internal component failure. I RMA'd the ssystem back to NewEgg with no problems (great customer support). After receiving the replacement system I established the new Wi-Fi network and then installed the four cameras on my home. Once installed, the cameras continuously dropped in and out of the Wi-Fi network. None of these camera locations are more than 50 feet away from the NVR and there are no significant electrical barriers in between. But the cameras cannot retain a solid link. The system is not stable. Unfortunately, I will RMA the system again.

Overall Review: I suggest you do not consider buying this LaView product. Instead, consider some other similar system from another manufacturer sold by NewEgg.

Pros: Cameras are nice for the price but no audio - hikvision cameras Only need to attach 12V adapters. Comes with 12V adapter extension cords Low light works well Recording software works adequately. Can set for motion or continues with alarms

Overall Review: I do recommend the product if you can handle the buggiy NVR software Once you get the unit up and running it works well and streams to iPhone without issue. You can set it up to port forward and use a browser in your phone/desktop to access camera. NVR has monitor connection HMDI. NVR WLAN good up to about 80 ft in single story home.

Pros: good but i have never been able to set it up right

Overall Review: i would have to think about recommending it

Cons: did not come with HDD so bought WD 2TB NAS harddrive. Could not get system to initialize HDD so put it into computer to initialize. That worked but when it was put back the system does not even show any HDD available for use. Now I have a paper weight. What use is a security system that will not record.

Overall Review: Absolutely do NOT recommend!!!

Did you find this review helpful?
Anonymous
Ownership: 1 week to 1 month
Verified Owner
This product has a lot of issues, it's really not ready for prime time.10/3/2020 8:41:25 PM

Pros: I have two of these and have been using for about 2 years. It is an 8 channel system, so you can buy two and just put all the cameras on one. It's cheaper than buying cameras individually. Or buy one now and another later (that's what I did). It's much smaller and less noisy than earlier models by this manufacturer.

Cons: -Adding cameras is a pain, it's not as simple as stated in the instructions. Often, it requires several reboots, adds and deletions, after manually searching for the camera before the camera is good to go. -Every other time you push reboot, or the power gets turned off, the system resets and loses the programmed settings for half the cameras. On a couple occasions the camera doesn't even come back and needs to get added back. -The wifi reception on the camera is terrible, it won't even reach to the other end of my house. I have one camera that only works half the year because the other half it loses reception. -The manufacturer used to allow 2 drives in RAID, this new model only supports 1 platter drive.

Overall Review: I would buy a different one if I could start over. But after the pain of getting it installed, running power cables, drilling the cameras, only to discover there's these latent issues that pop up weeks, months, down the line, it's not worth the trouble of junking it for a new system.