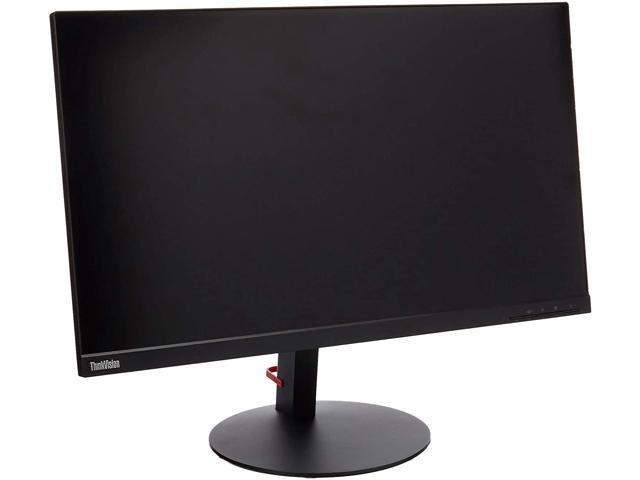 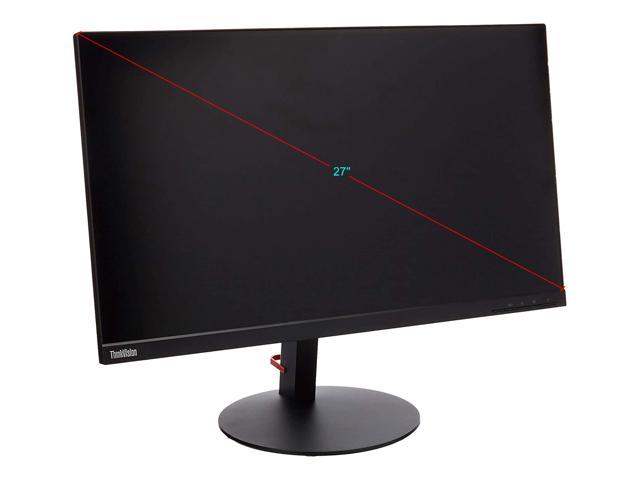 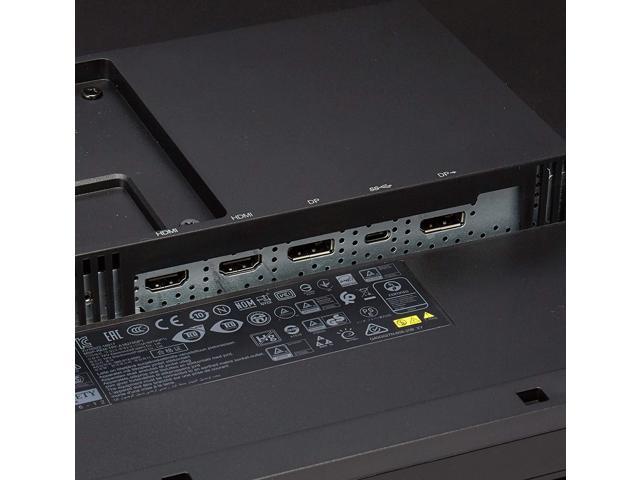 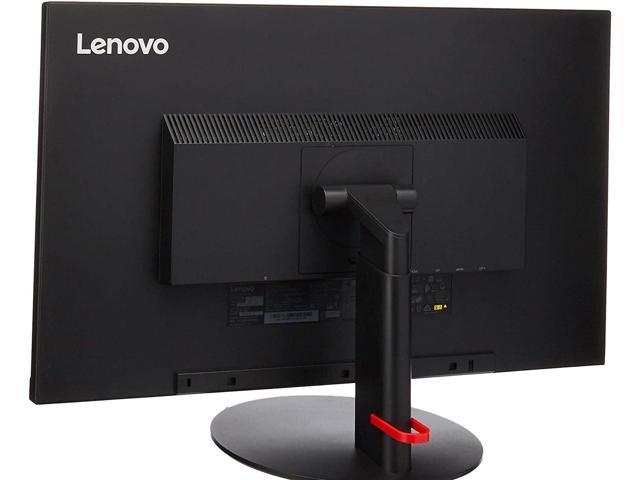 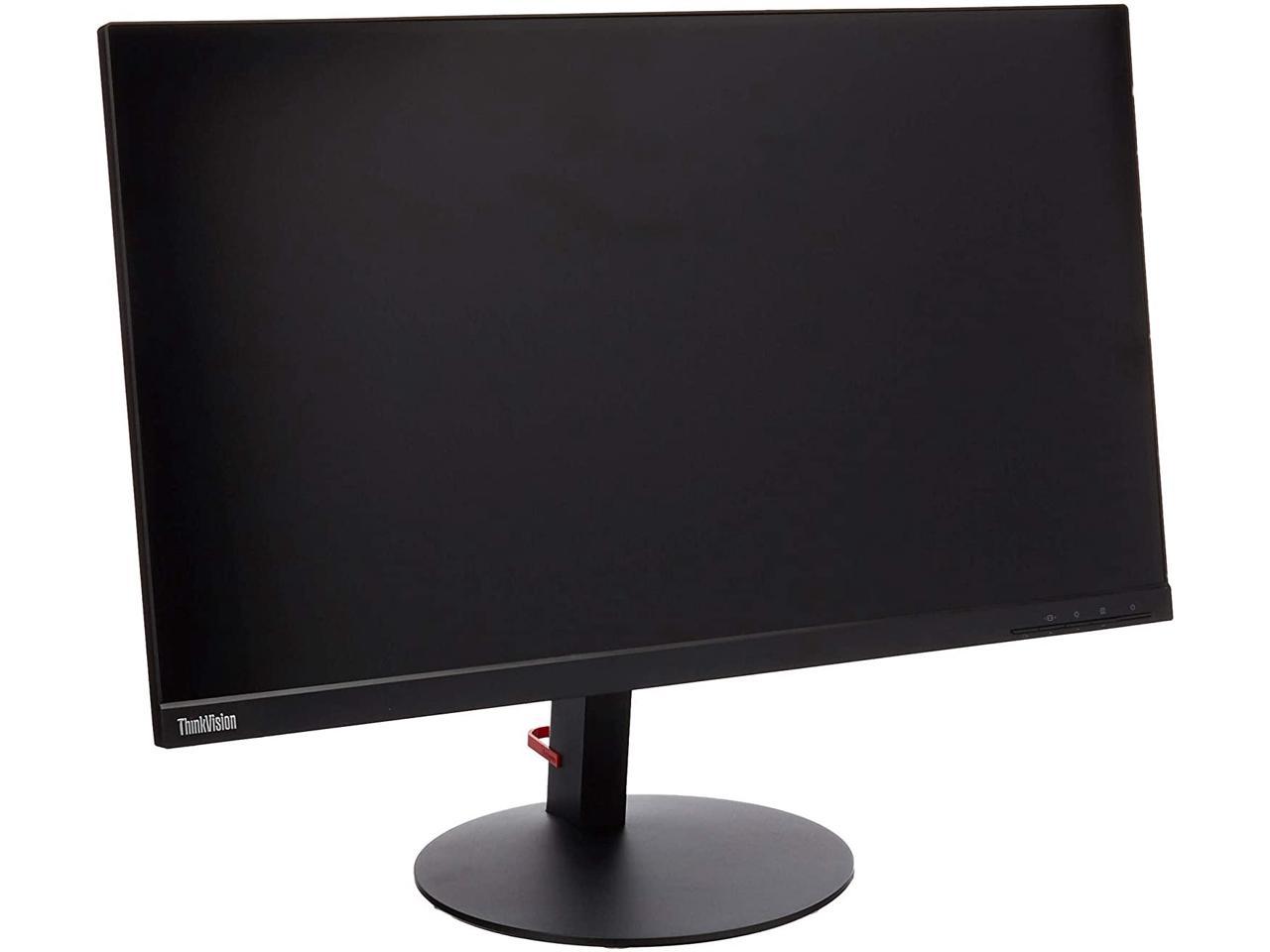 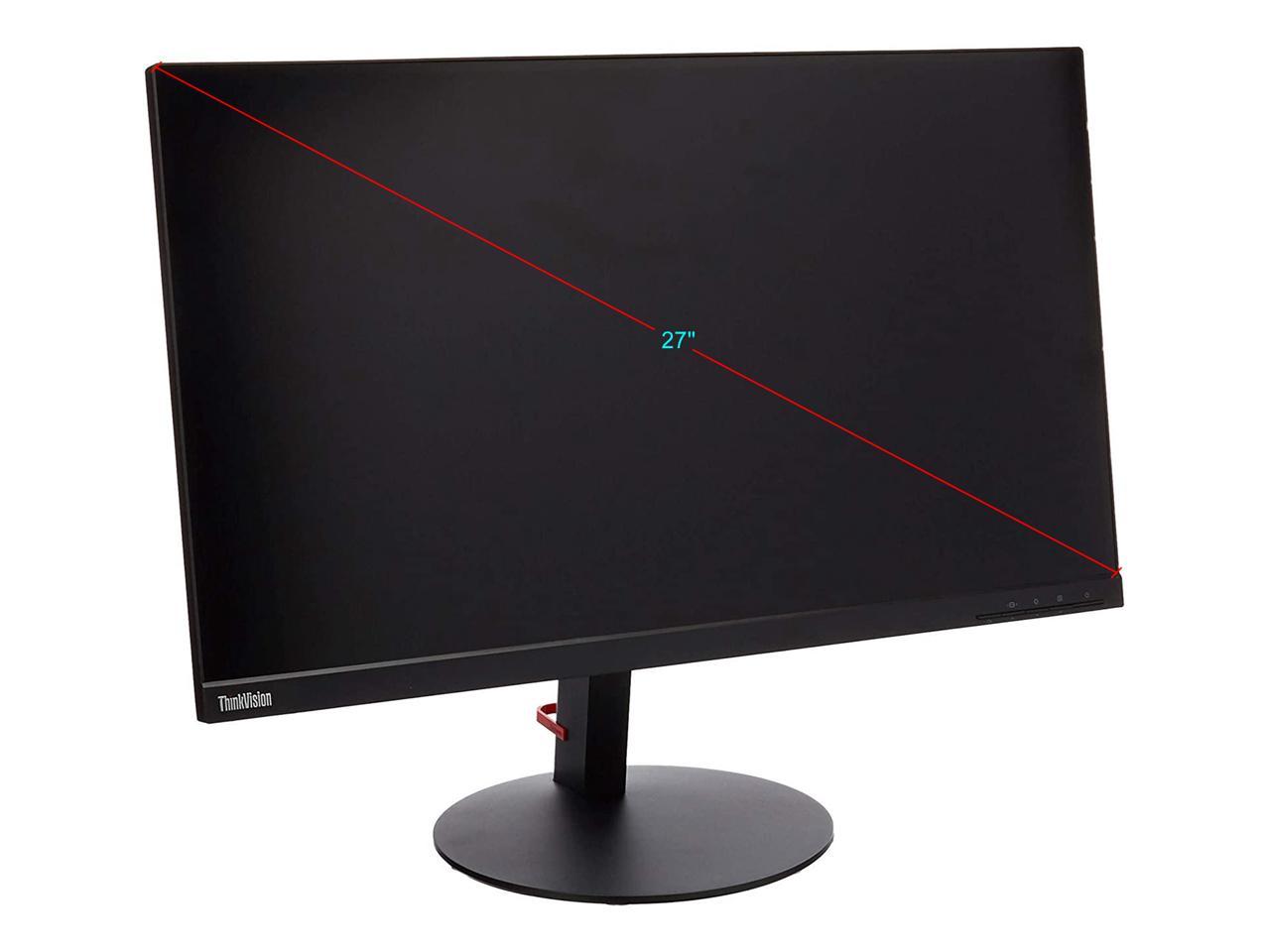 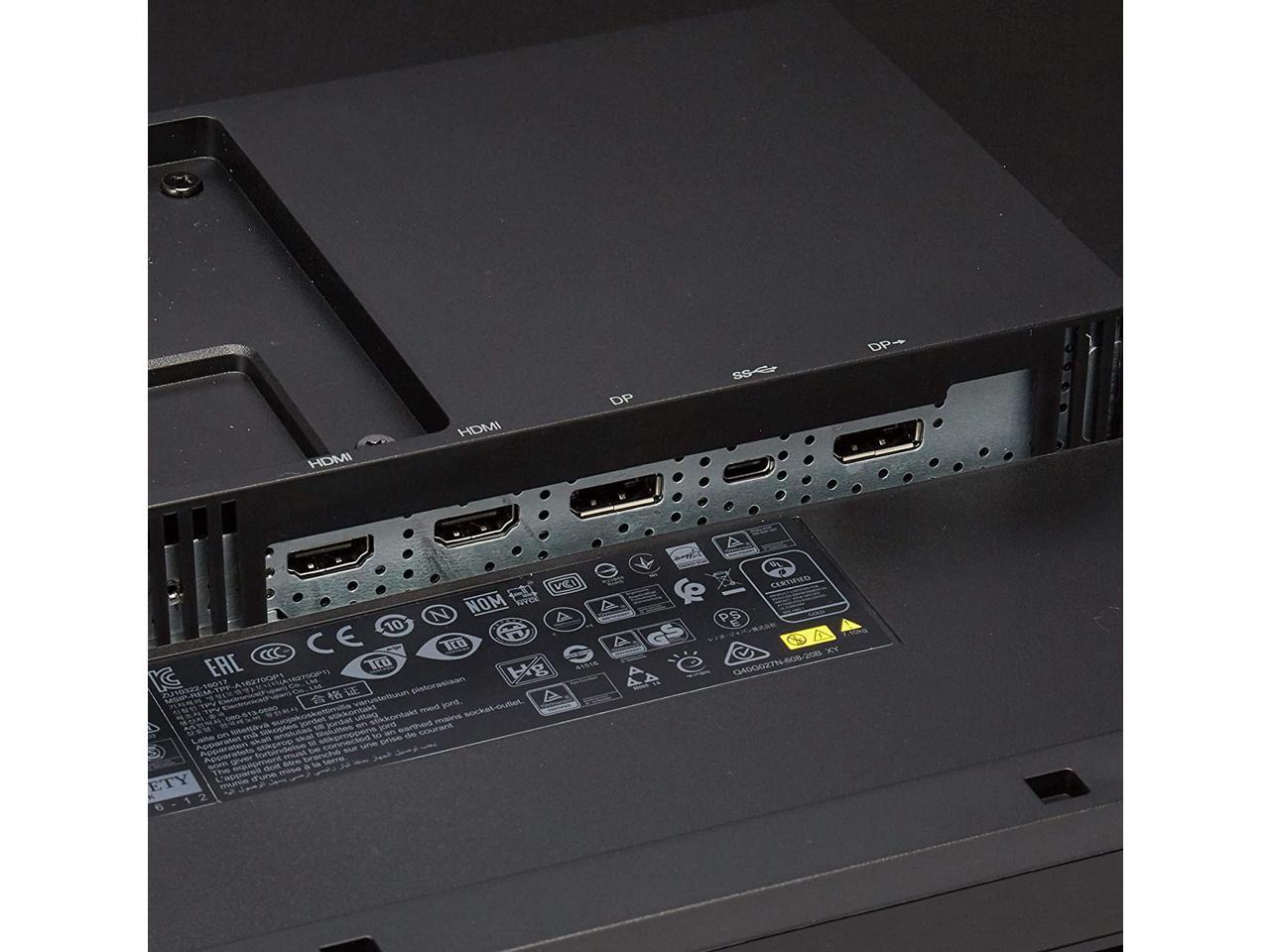 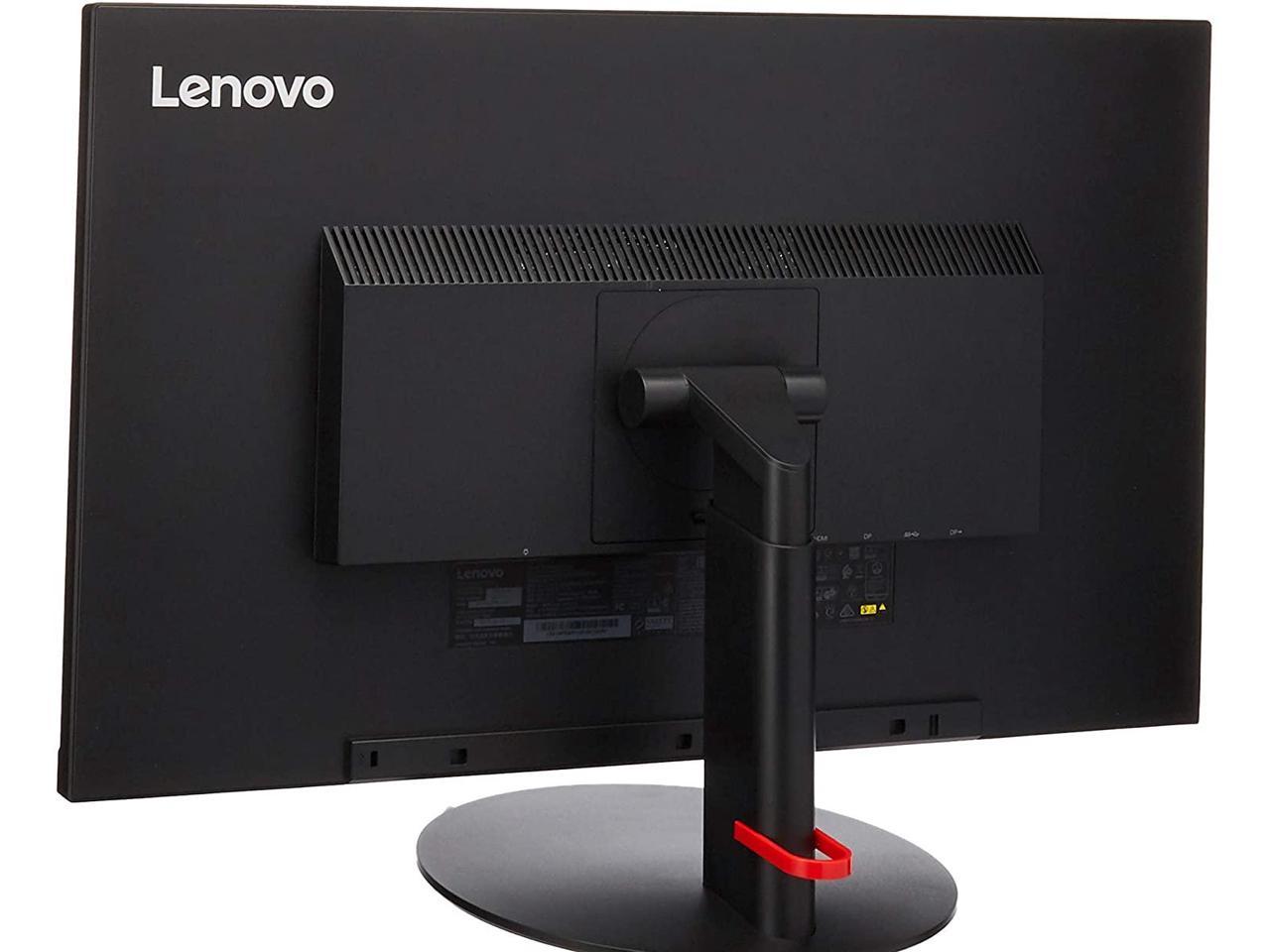 Learn more about the Lenovo 61AFGAR1US

Pros: The good: The picture is beautiful, and after 8-hours of frustrating setup and troubleshooting spread throughout the first week of ownership, they work beautifully. The price was good; I found it for about 25% less than the comparable Dell U2719DC. I’m not a graphics guy, but supposedly these are color calibrated from the factory – I can’t vouch for calibration accurateness, but the images look great on both, and the color/hue/tint/whatever of images matches on both screens if I drag an image to span both screens. The included stand supports rotating the monitors sideways if you want one long monitor for reading/coding/whatever. Also, it came with all the cables you need – USB-C to USB-C, USB-A to USB-C, Display Port to Display Port, HDMI to HDMI, and of course power. Though I understand outside of North America, it only includes the power cable.

Cons: - Getting dual monitors working via single USB-C eventually worked, but it was painful. - Provided USB-C cable is flakey - Lenovo's support is less than worthless. If you can't figure out the issue on your own, you may as well just return it. I tried first connecting the first monitor via USB-C cable to the laptop. I could see that the laptop was charging, but nothing would get displayed on the screen. After playing around with settings on both the laptop and monitor, nothing worked until I found a Microsoft article that suggested you can fix similar issues by reversing the USB-C cable. I didn’t think that would have any affect, since I was using the Lenovo provided cable, but I gave it a shot, connecting the end previously on the monitor to the laptop, and vice-versa. I was shocked to discover it worked. So that was first frustration. I’d rather they didn’t send any cables and let me go buy my own, vs sending a low-grade “one-way” cable that burnt up a couple hours of my time troubleshooting. That got everything “working” in that I could see the monitors from the laptop, but the laptop only saw the two monitors as a single external monitor, and everything displayed on the first monitor was then mirrored on the second. Also, even though Windows Display Settings couldn’t “see” two monitors, the laptop definitely knew there were two, because it showed up as two unknown displays in Device Manager. I installed the drivers from Lenovo’s website, and the correct name now shows in Device Manager, but that still didn’t help my problem. I thought the problem might be the Lenovo supplied USB-C cable wasn’t properly transmitting something since I’d read so many reviews for this monitor saying that it was a junk cable, and I'd already personally experienced one issue with it. So, I bought a Thunderbolt 3 with 40 Gbps cable thinking that would resolve my issue, but it made no difference. At this point, I tried calling Lenovo for support, but their tech support is worthless. Actually, less than worthless, and a complete waste of an hour. After going through the message system to get to a human and politely reading off my serial number and explaining what I’m trying to do, the tech would tell me that I need to be transferred to another person who will take care of me. That happened 4 times where I just went right back to the exact same queue that I was in before, same message system, etc. The fifth person listened for slightly longer and tried to really understand what was wrong before simply hanging up on me, with no pretense of trying to “transfer” me. Lenovo’s tech support is less than worthless, because they’re rude and liars, and I wasted an hour of my life talking to them and getting nothing out of it. So, I took an egg off for that. After my experience with the tech support, I was tempted to just box both monitors up and return them to Lenovo and buy the more expensive Dell. But I decided to spend another hour or two troubleshooting on my own. In the end, I found a Lenovo forum where some other monitor owner (not a Lenovo support person) mentioned needing to go through the options and make sure you turn on the option DisplayPort Daisy Chaining in the on-screen menu of monitor 1. After I did that, everything worked like a charm. For the life of me, I can’t figure out why anyone should need to enable/disable this setting. I don’t see the harm in just leaving it on all the time. The DisplayPort-out port only supports out, so why shouldn’t that port also have the Daisy Chaining feature on all the time? Another Lenovo frustration.

Overall Review: I bought 2 of these monitors specifically so I could have dual screens, and power the laptop, and USB ports for keyboard + mouse, etc., all connected by a single USB-C cable to my Surface Laptop 3. It took a bit of work, but I can confirm it does all work perfectly. I wanted to share my issues in case anyone else is having similar problems. My setup: 15” Microsoft Surface Laptop 3 (Intel version) connected via USB-C to Monitor 1. Then, a Display Port from the Display Port out of Monitor 1 to DisplayPort In of Monitor 2. Enable DP Daisy Chain in Monitor 1's OSD. DisplayPort-Out is the one with the arrow by it: DP->

2 out of 2 people found this review helpful. Did you?
Gaffisonbg
Written by a customer while visiting Lenovo
Color, clarity and connections.1/12/2020 9:00:00 PM

Overall Review: Excellent definition and color. Easy to set up. Only issue is that there are no USB or additional USB-C ports for peripherals

Did you find this review helpful?
jlees
Written by a customer while visiting Lenovo
Great display12/29/2019 9:00:00 PM

Did you find this review helpful?
Rhonda72
Written by a customer while visiting Lenovo
Great monitor1/3/2019 9:00:00 PM

Overall Review: Purchased this for my husband for Christmas, he LOVES it! Exactly what he needed for his drawings..

Did you find this review helpful?
AndrewB
Written by a customer while visiting Lenovo
Professional Design Monitor1/3/2019 9:00:00 PM

Overall Review: I have only purchased Mac monitors for my web and print design. The ThinkVision P27h 27" Monitor is a perfect alternative, at a 1/4 of the price. Rich colors, crisp type, a perfect monitor for an extended desktop environment.

Overall Review: I bought a high-end laptop that will be used like a desktop computer most of the time (>98%. So I bought a large monitor to use at my desk. The display is bright and clear with nice colors, but not quite as nice as the laptop's own smaller display. I am happy with everything except the usability of the laptop/monitor combination. I need the laptop open to use the keyboard, but the laptop screen gets in the way. It blocks my view of the bottom of the large monitor. I tried tucking the laptop screen behind the monitor screen, but it does not fit. Otherwise I am happy with the combination.

Did you find this review helpful?
DePauwMo71
Written by a customer while visiting Lenovo
Great color representation and perfect size9/23/2018 9:00:00 PM

Overall Review: I bought these several weeks ago to replace two 24' FHD monitors. The 4K 27" monitors definely make a difference when working.

Overall Review: Once everyone in my office saw how nice this monitor is they all ordered one! Excellent customer service and FAST delivery.