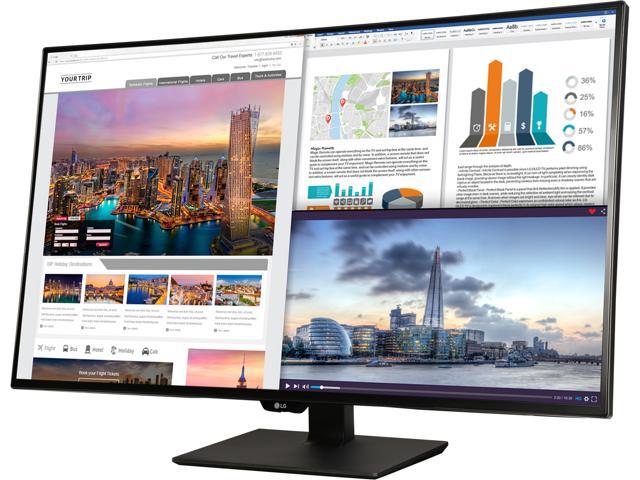 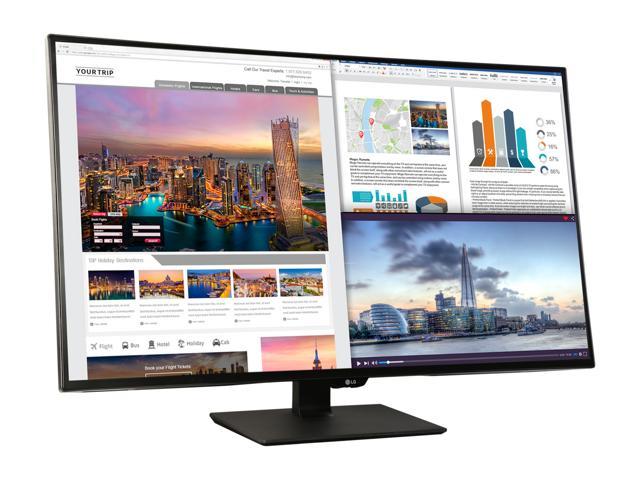 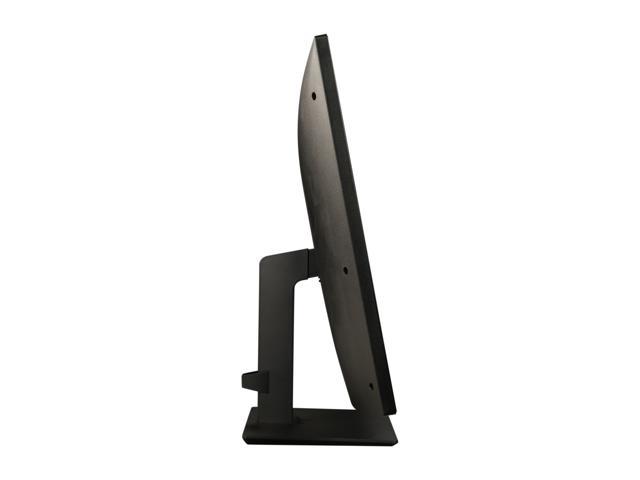 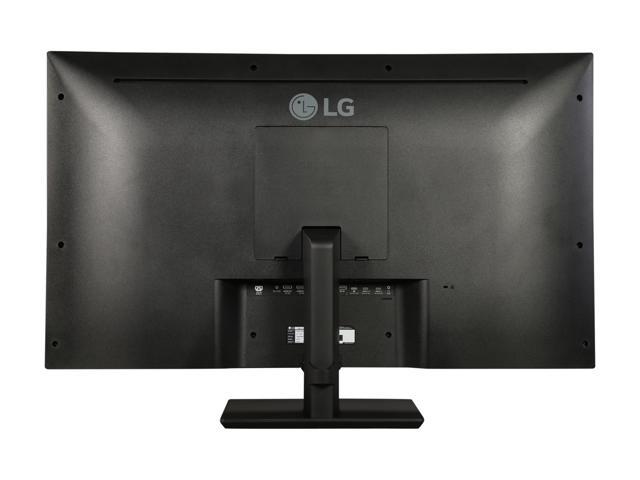 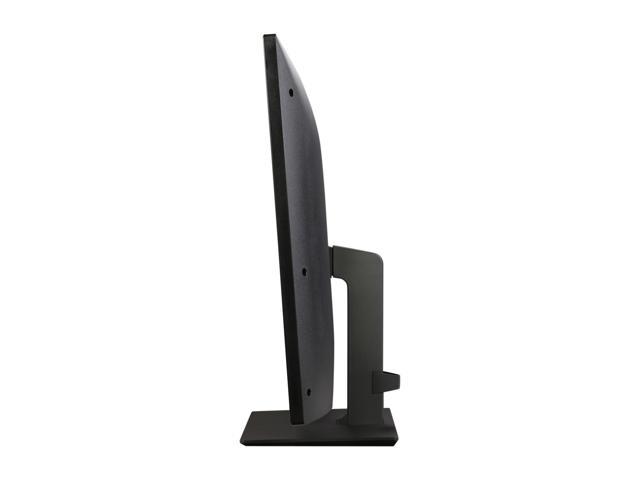 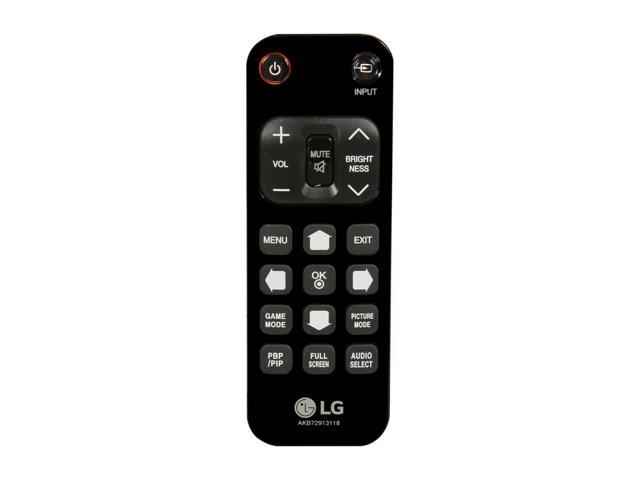 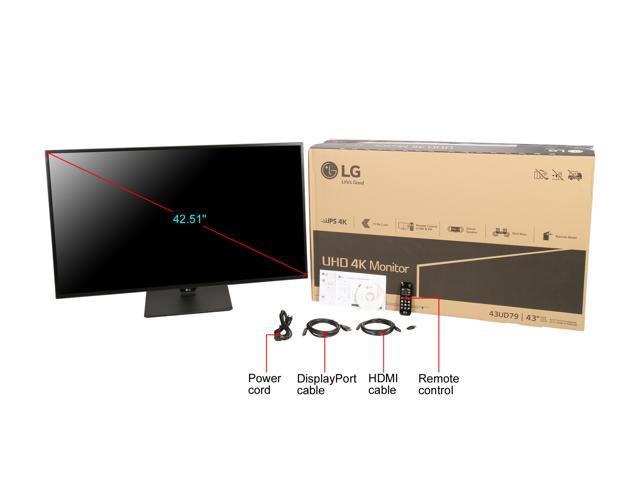 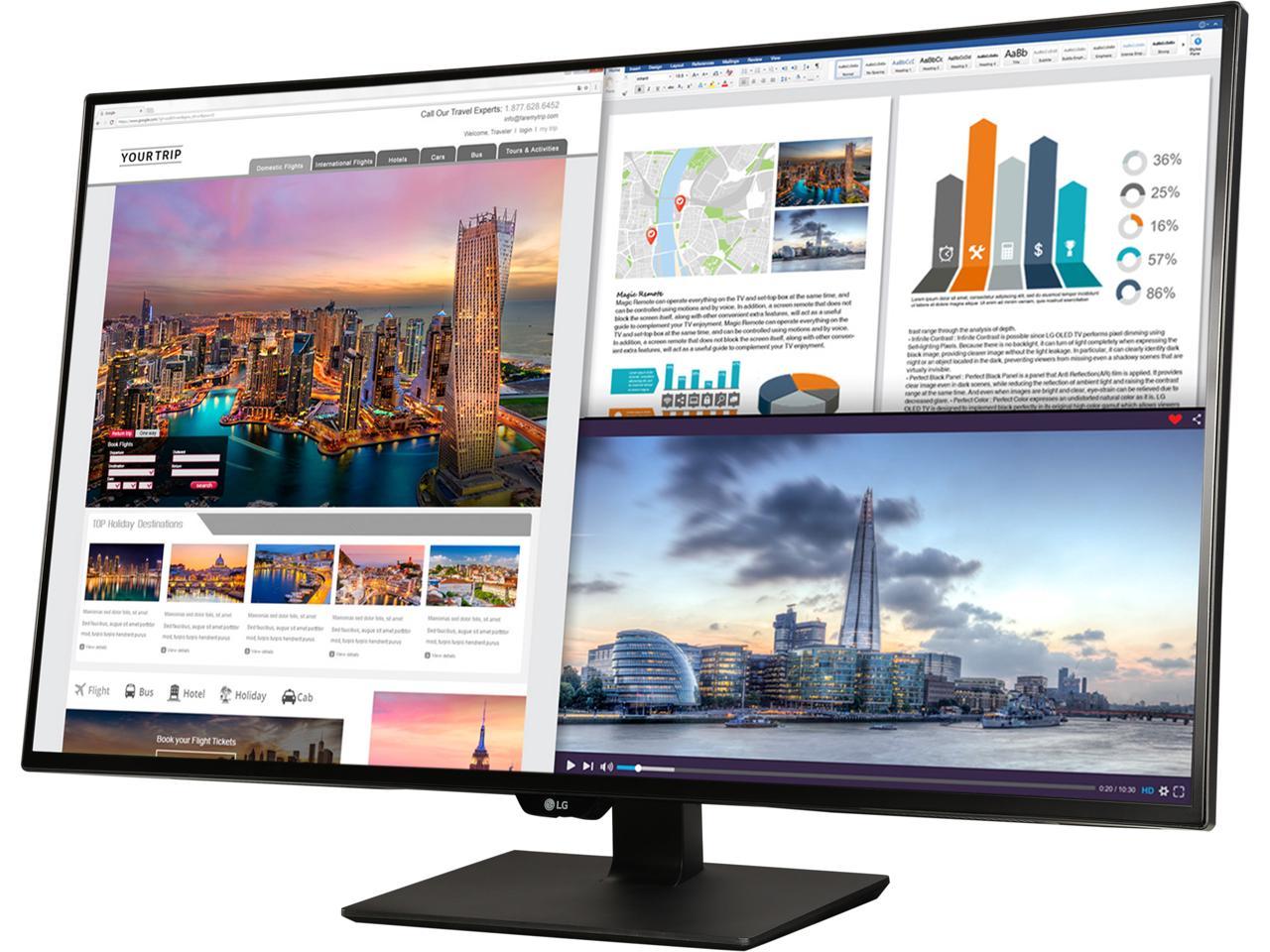 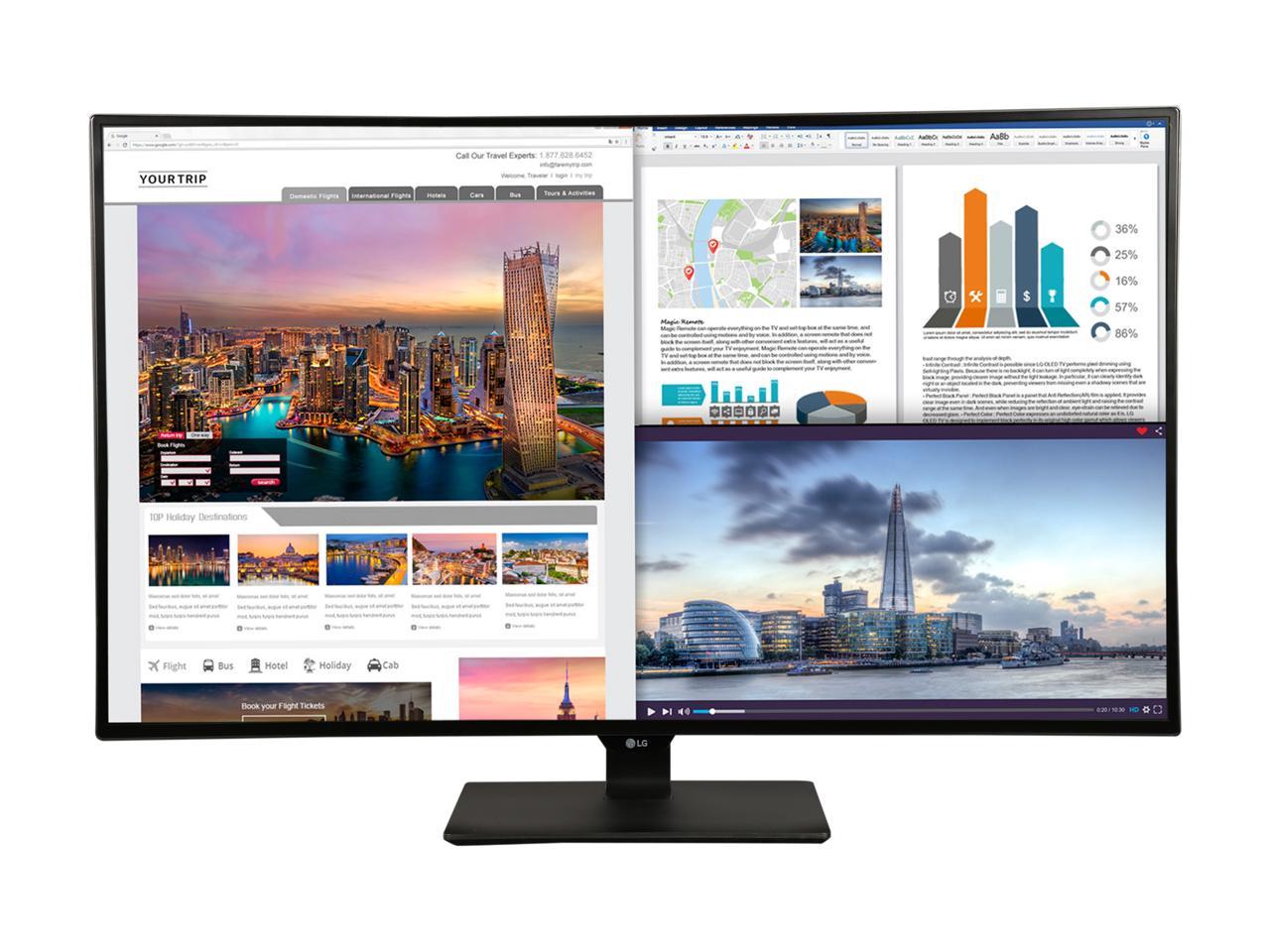 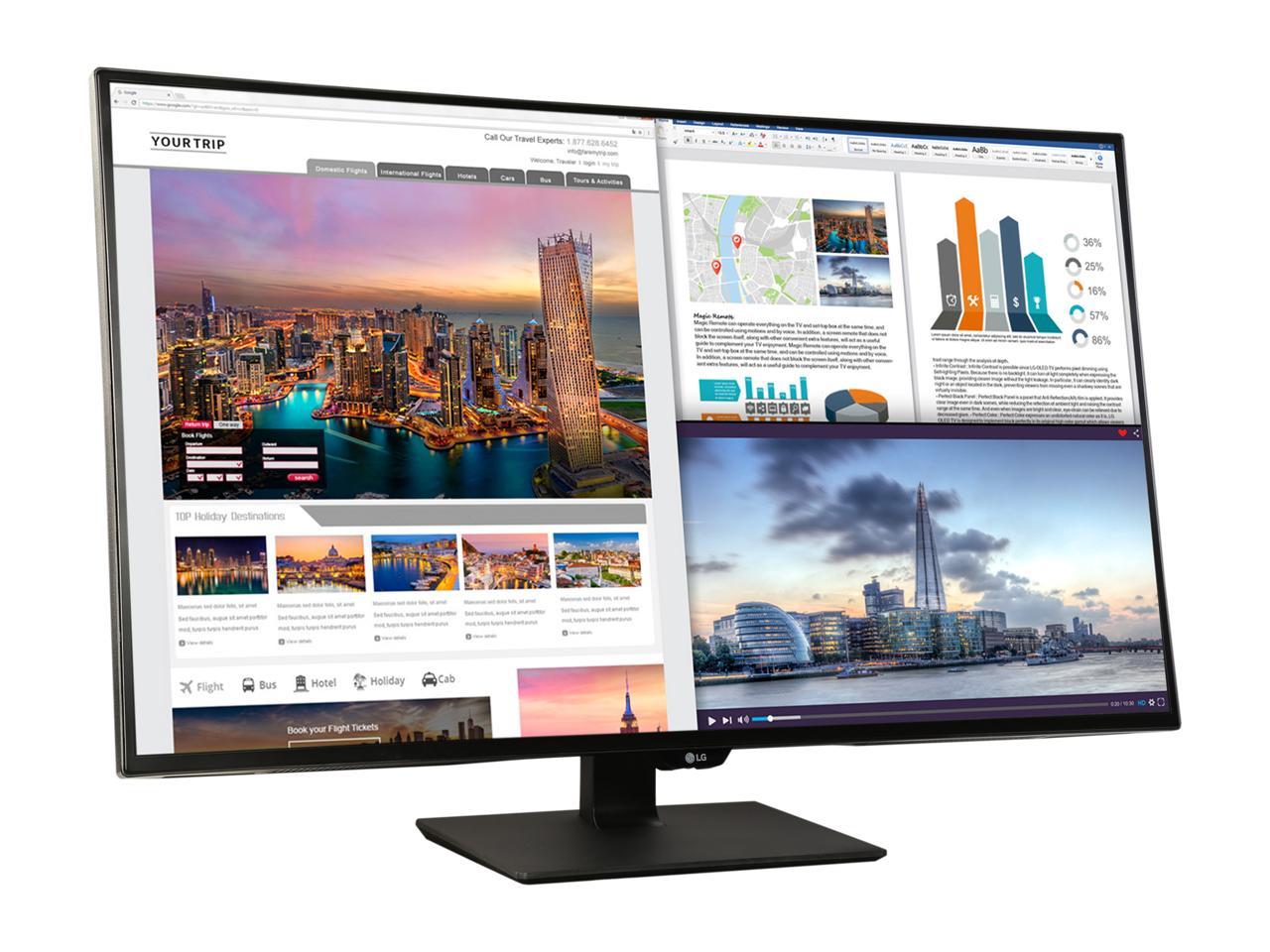 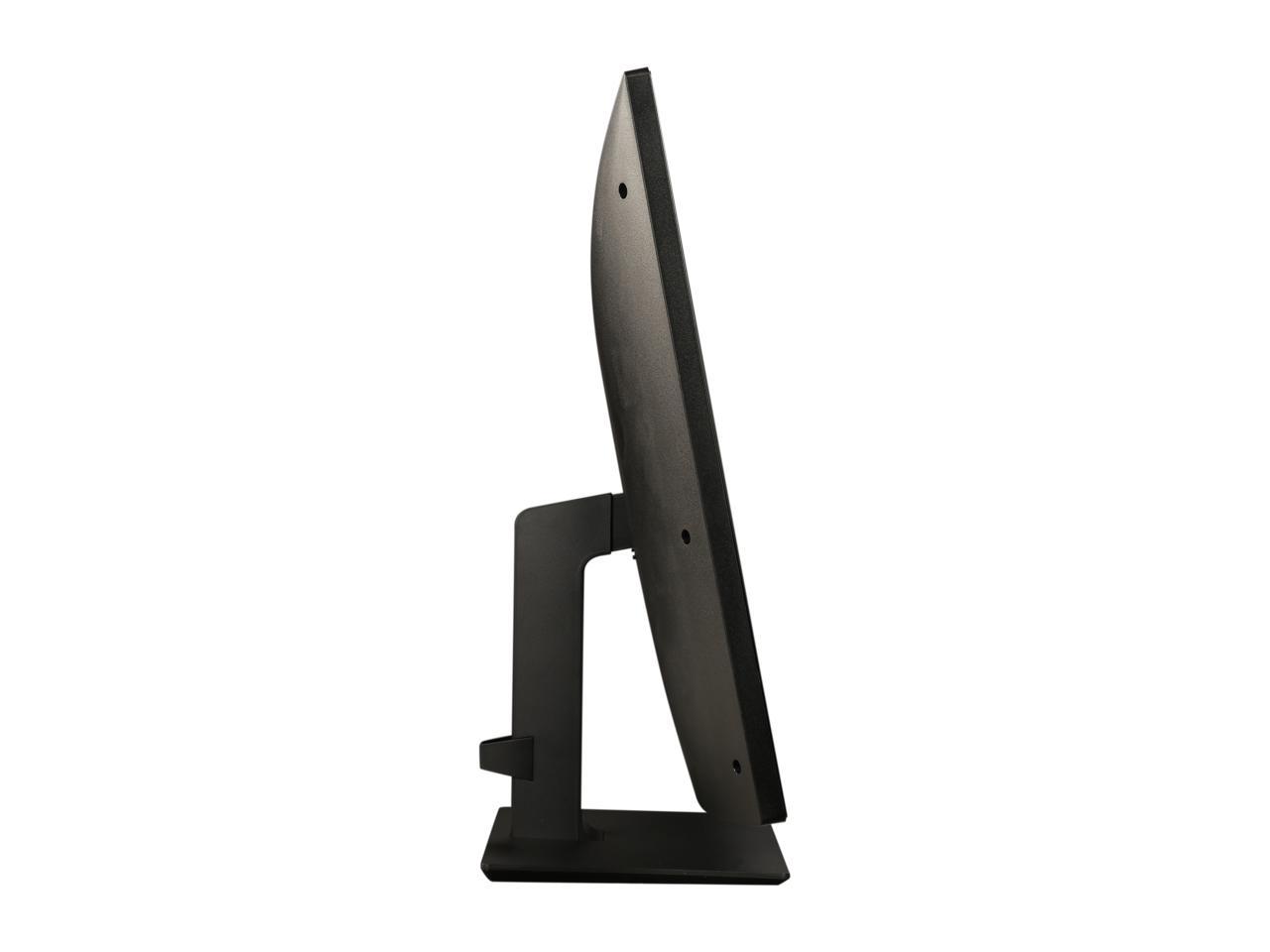 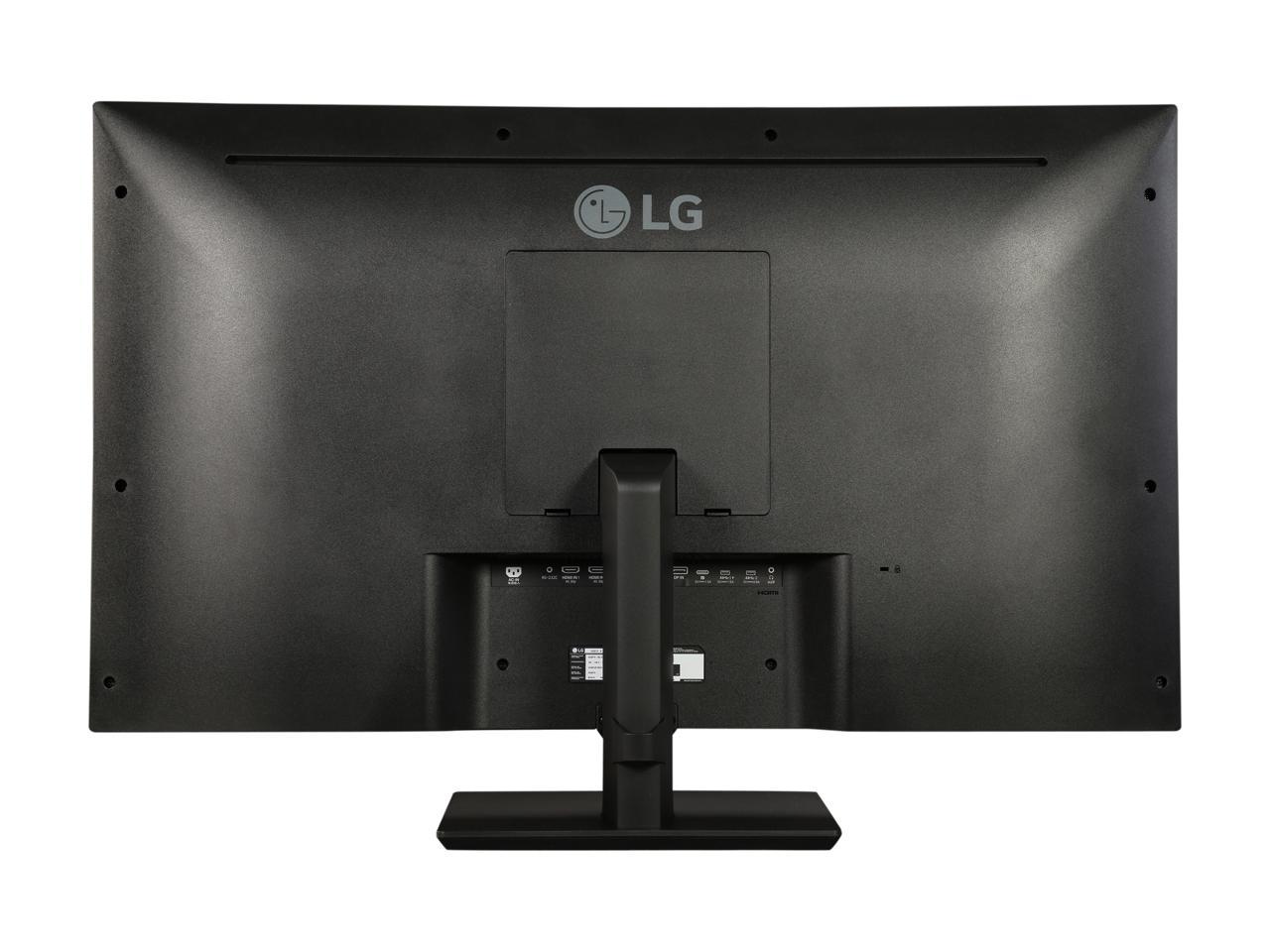 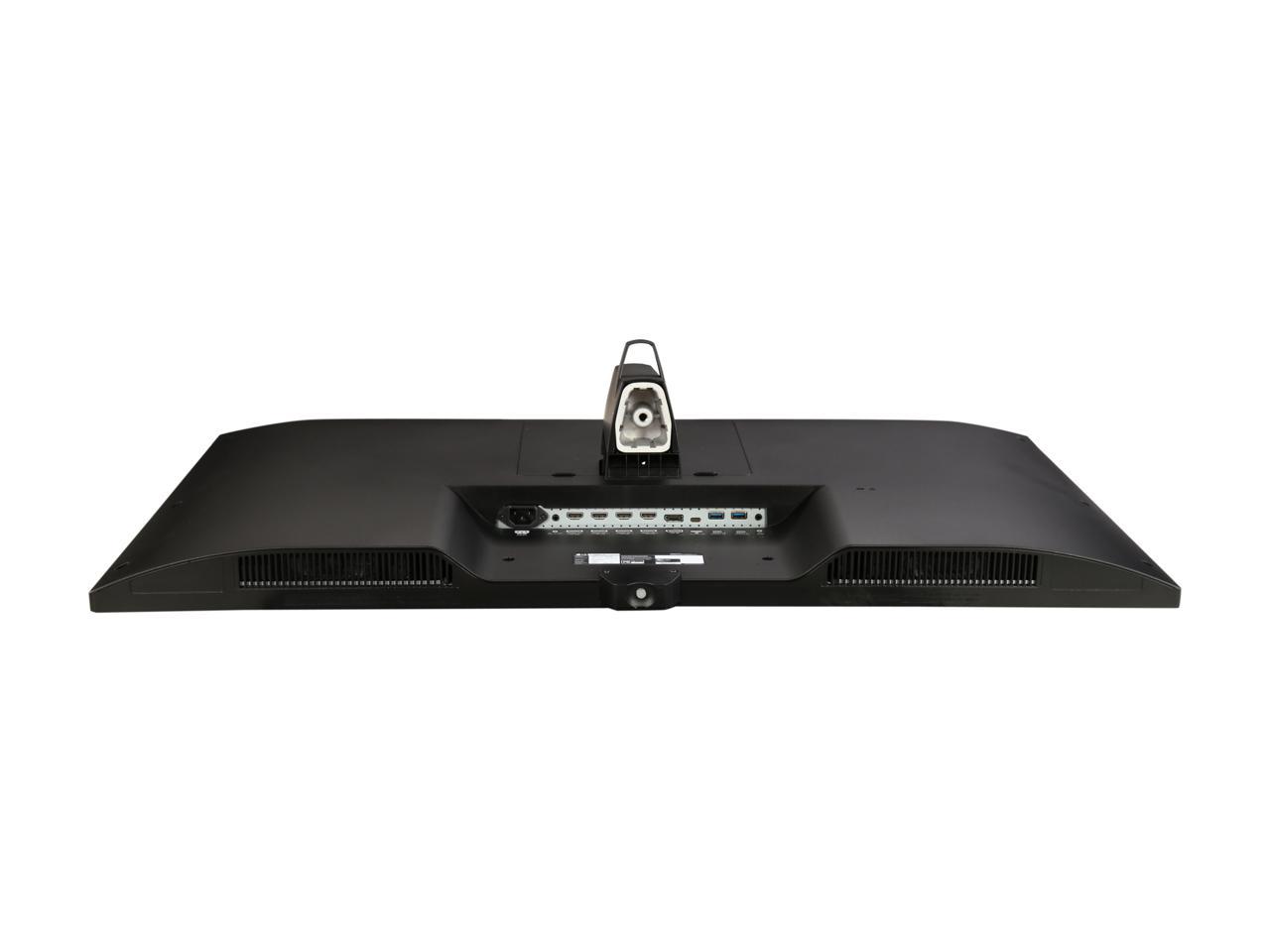 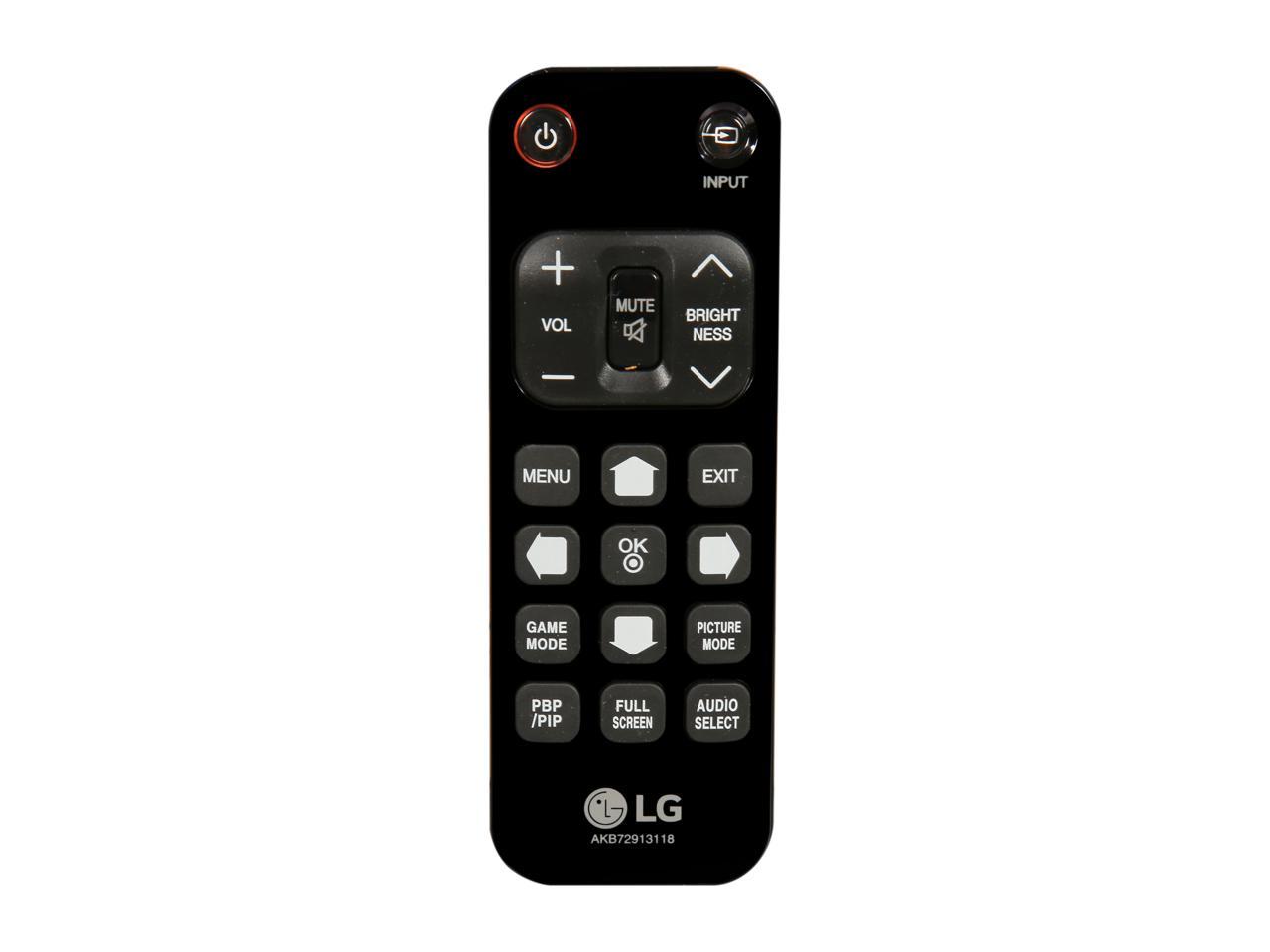 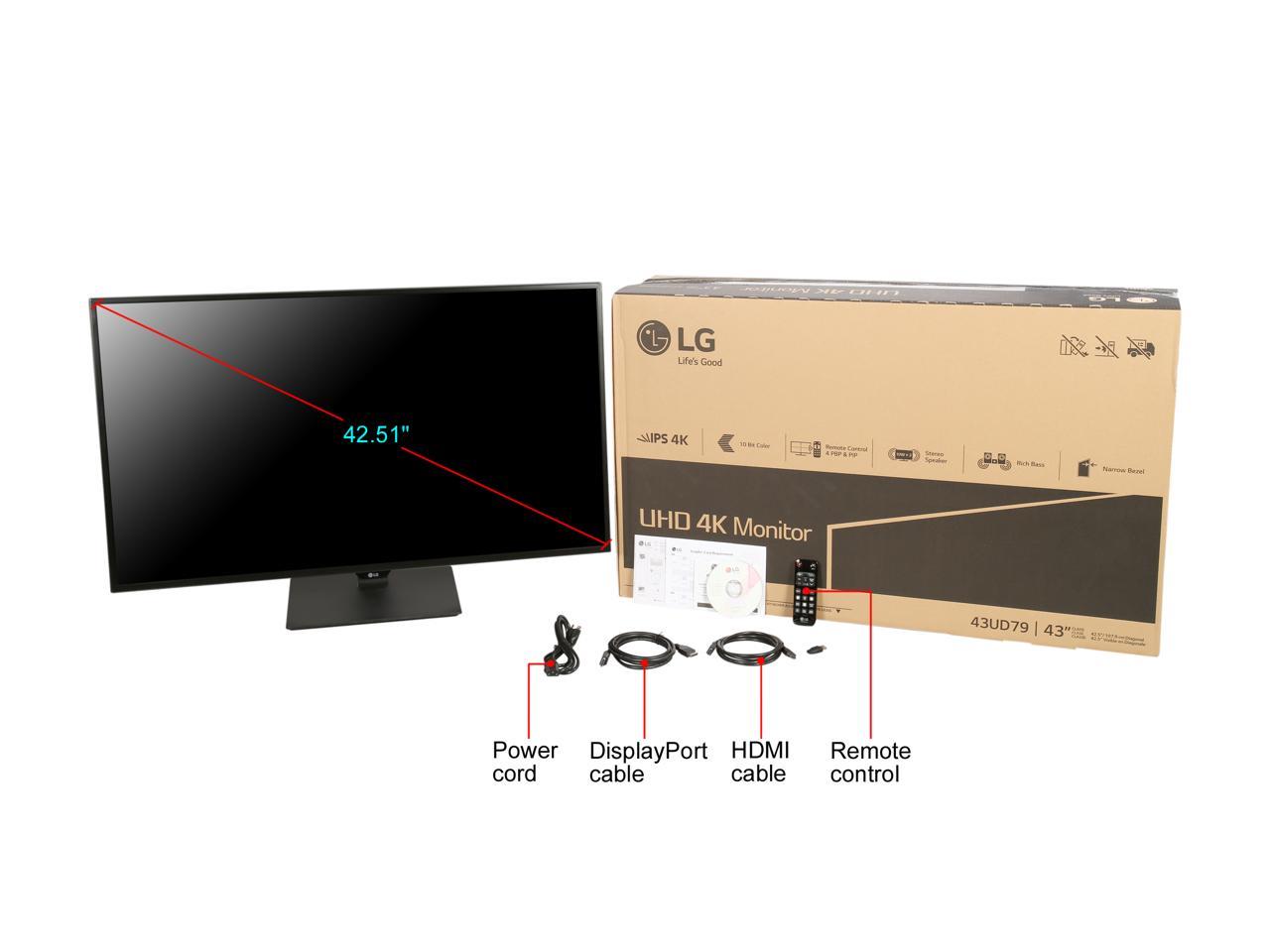 Be totally immersed in the ultra-clear 4K UHD resolution. Every frame is vibrant and lifelike. Together with the dual 10 Watt speakers with Rich Bass, you will be thrown at the center of the action. Four HDMI inputs make it easy to juggle between various source devices, while USB Type-C reduces cable clutter when connecting to a USB Type-C enabled laptop. The exclusive Screen Split feature makes multi-tasking a breeze and you can control the display settings easily with the remote. Connect with confidence: This LG 4K monitor is compatible with the latest HDCP 2.2 copy protection, so it will display video from 4K streaming services, game consoles and Ultra HD Blu-ray disc players.

Now, the monitor is a multimedia centerpiece. Easily and conveniently connect your other digital devices and peripherals with the convenience of four HDMI inputs.

Adjust Display Settings with a Remote

Picture mode presets, including Picture in Picture, can be easily adjusted with the included remote control.

Customize your monitor layout for multitasking with the latest version of LG Screen Split. Resize and display multiple windows at once, with 14 options including four different picture-in-picture (PIP) choices.

Enjoy what's on the screen with sound produced by the monitor's two 10-watt speakers with Rich Bass. LG’s Rich Bass function can cover sound under 85Hz showcasing a wider and richer sound with impressive bass depth.

Pros: Well packaged, little chance of shipping damage. Beautifully constructed - great QC. Good management, either w/ remote or on screen app. Good, even color w/ extensive control for special uses. Plenty bright enough for anyone. I can't find even a single busted pixel. I see absolutely no 'leakage' at the edges of the monitor, a common complaint with IPS monitors. The cable jacks on the rear face are easily accessed and well identified.

Cons: LED illumination limited to exact size of screen. Several people have noted a 'fall off' of pixels on the left and right edges. Actually this so-called fall of occurs at all edges including the top and bottom. It happens when there is no illumination (LED) behind a pixel in the line of sight between your eye and the pixel. When you view the pixel from close to perpendicular from it the pixel is fully visible. it's an idiosyncrasy probably due to the desire to make the bezel as thin as possible - a popular feature. I can't imagine this being a problem in the work that I do. Some people have complained about the base. I find it to be very stable with adequate flexibility. If you want to change elevation, tilt at an unusual angle, or rotate the display then but a 200mm VESA mount. There's hundreds available at reasonable cost.

Overall Review: I highly recommend this display for anyone who needs the screen real estate and has adequate space for its deployment. Its pixel pitch is large enough that text from Windows apps @ 100% normal size is entirely readable at reasonable viewing distance. No scaling or other adjustment is necessary.

Cons: -Only ONE DisplayPort? -USB C port isn't Thunderbolt 3, but yet another DisplayPort/USB-C standard? -Why aren't all of the HDMI ports HDMI v 2? -Manual is pathetic. Guidance with respect to USB cabling is sorely lacking.

Overall Review: Speakers are fine for desktop use. They are plenty loud when sitting 3 ft in front of the monitor. There's not much bass to them, but they are certainly adequate as monitor speakers go. Nobody is going to buy this monitor because it has good speakers! I used the monitor for a couple of days with the included base. It was certainly stable enough, but only has a tilt feature. If you need more flexibility, you'll have to purchase a monitor arm capable of holding a 28 lb (12.3 kg) monitor. The weight description on Newegg's website is WRONG but closer than it was when I bought this. As I write this review, its shown as 25.1 lbs w/o stand on this site, but the specs in LG's manual say 27.7 lbs w/o stand. I wound up purchasing the wrong monitor arm as a result of this typo. Luckily I can use the monitor arm elsewhere, so it wasn't a total waste. The VESA mount is 200 mm x 200 mm, so you'll also wind up purchasing some kind of adapter plate to mate with most monitor arms. This will add weight, so be sure to take this into account in your monitor arm purchasing decision. I purchased Ergotron's 45-478-026 HX wall mount which supports monitors between 20 and 42 lbs and supports 200 x 200 VESA patterns. I haven't experienced any of the "blacking-out" that others have complained of-- not even ONCE. It was a guessing game to figure out what Mac USB-C cable would work. Expensive Thunderbolt 3 cables don't work, and the standard charging cable that comes with the Mac won't drive the monitor either (although the monitor does charge the Mac with it). I purchased a "[USB-IF Certified] USB 3.1 Type-C Gen 2" cable from Cable Matters that worked. As soon as I plugged it in, the USB-C port began working like magic. Even though the cable isn't a Thunderbolt 3 cable, it drives the monitor at a full 4K 60Hz. By the way, another note elsewhere says that you can request a USB-C cable from LG. I submitted a support request for this, and they tell me 'its on the way.' The Mac thinks its being charged when plugged into the monitor, but it runs down anyway. The monitor documentation does not say what the charging wattage is, but the USB C port has a 5V 1.5A marking next to it. That's only 7.5 watts. The remote is really handy. I'd probably be entirely dissatisfied with the monitor if I didn't have it. The included software to control the monitor works on both Macs and PCs and is identical on both platforms. It provides a convenient way to make most of the monitor adjustments without the remote control. I haven't worked much with the Dual Control software yet, but I'm hoping I can eliminate my old KVMP switch altogether with it. However, I wonder how long LG will support such a thing-- I still have monitors around from my Windows Vista days, so its hard to imagine the vendor sticking with all the software updates for that long. Many have complained about the issue with backlighting at the edge of the screen. The critics are correct: the problem does exist at ALL the screen edges… However, there's an easy fix: simply turn on Underscan(PC Only) for the corresponding input and the monitor adjusts It's horizontal resolution from 3840 to 3780. This results in a 30 pixel wide black bar at each edge of the screen. I tested this setting on both Macs and PCs. I suspect the (PC Only) designation for the setting means that it shouldn't be used for devices like Blu-ray players that expect the full width of the screen to be available and cannot adjust to this. By the way, the setting does nothing to adjust the vertical resolution- it remains at 2160.

Cons: - Annoying Spatial low frequency backlight PWM flicker (Fortunately a firmware update fixed it) - Factory Color calibration is VERY BAD. You will have to tune it yourself. - Image retention (Fortunately it goes away overnight) - I don't feel like this monitor has a good quality IPS panel.

Overall Review: I am from India and It was my dream for me to buy a 4K monitor of this size. Price of this monitor may appear cheap for you but for me, it took an year to save enough money to buy this monitor. I brought it from Newegg because not even a single 4K monitor of this size is being sold in India by any manufacturers. I found the price reasonable with Newegg and decided to buy it. At first I was little nervous about the customs clearance and import procedures but later figured out I don't have to worry about any of those things because Newegg will take care of it. Newegg collected estimated customs duty from me during checkout and the final price was around double the price in the US which makes sense because our import duty and tax rates are high. Overall the buying experience was great and I felt very happy after the purchase. Unfortunately just two days after I paid for the monitor, new egg slashed price on the same monitor and the difference for me was around $150 which broke my heart. That is the day I felt like the unluckiest person on earth!

Pros: Was able to plug and play right out of the box! The factory calibration is phenomenal which makes everything look nice bright and clean. Great monitor for productivity and for the general consumer.

Cons: There is a bug when I connect to dvi and the monitor will go black for a sec but will come back to life. I think it is a firmware issue or maybe I need to install the disc I was provided.

Pros: - great size - lot of options, possibility to stream multiple sources at once or use the very large screen to work on many different tab at the same time. This is perfect for trading, stock, etc. - great 4k resolution -compatible with VESA mount

Cons: - screen doesn't pan it only tilt... and not that much

Overall Review: - I recommend if you want to replace and existing 2 screens setup, that is perfect.

Cons: Lacks HDR and Gsync or Freesync Will need to upgrade once I start playing HDR compatible games

Overall Review: I like it as a TV and for older 4k Gaming I am playing Tomb Raider 2013 at 4k and its fantastic

Pros: Great resolution and a lot of viewing area.

Cons: Non that I can find for the price.