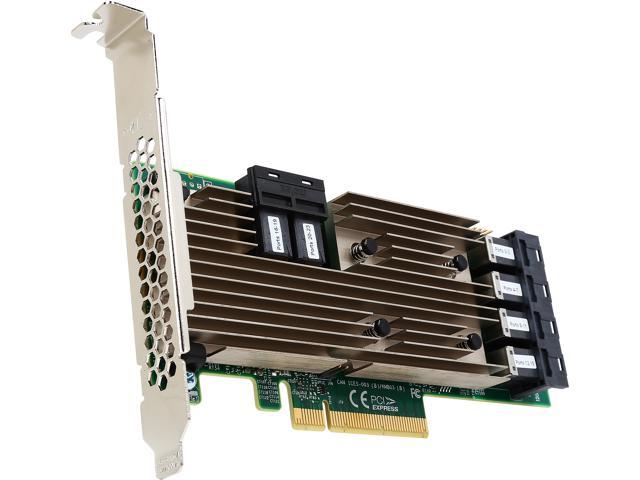 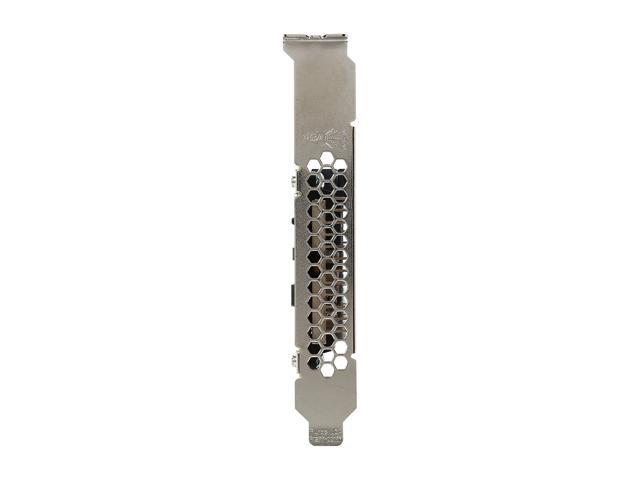 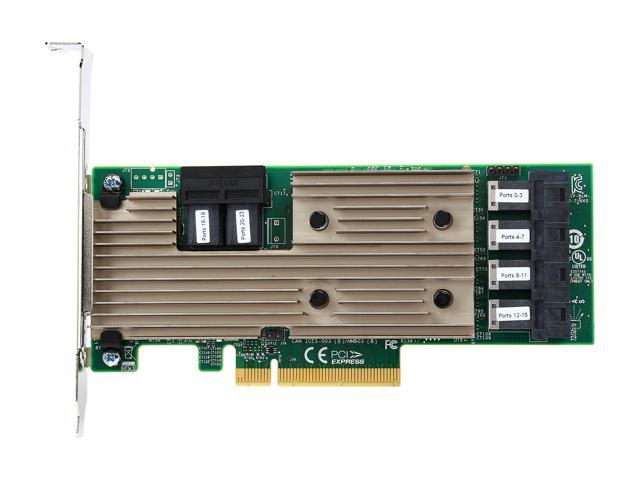 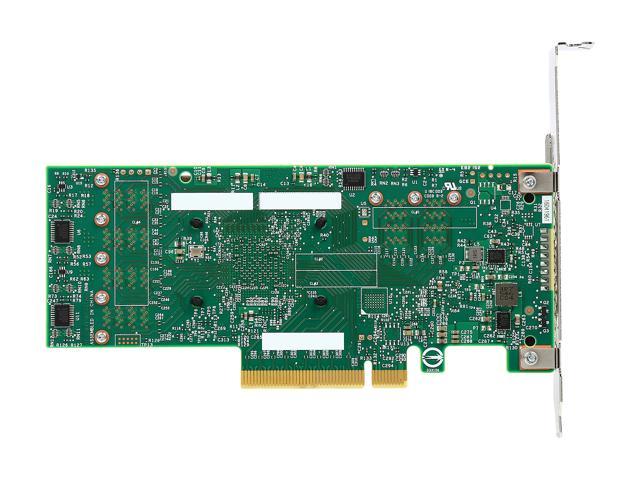 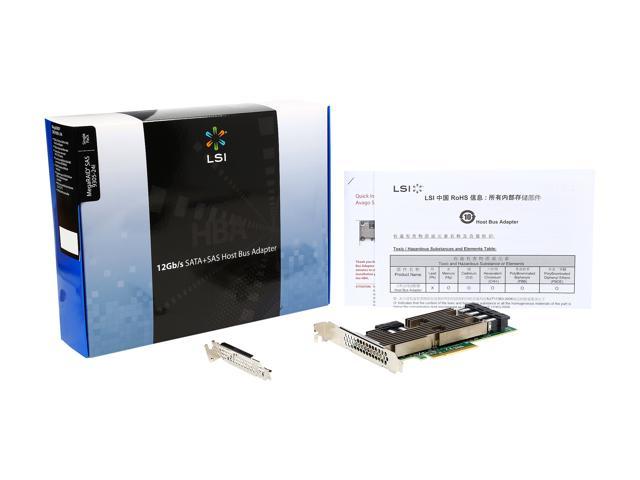 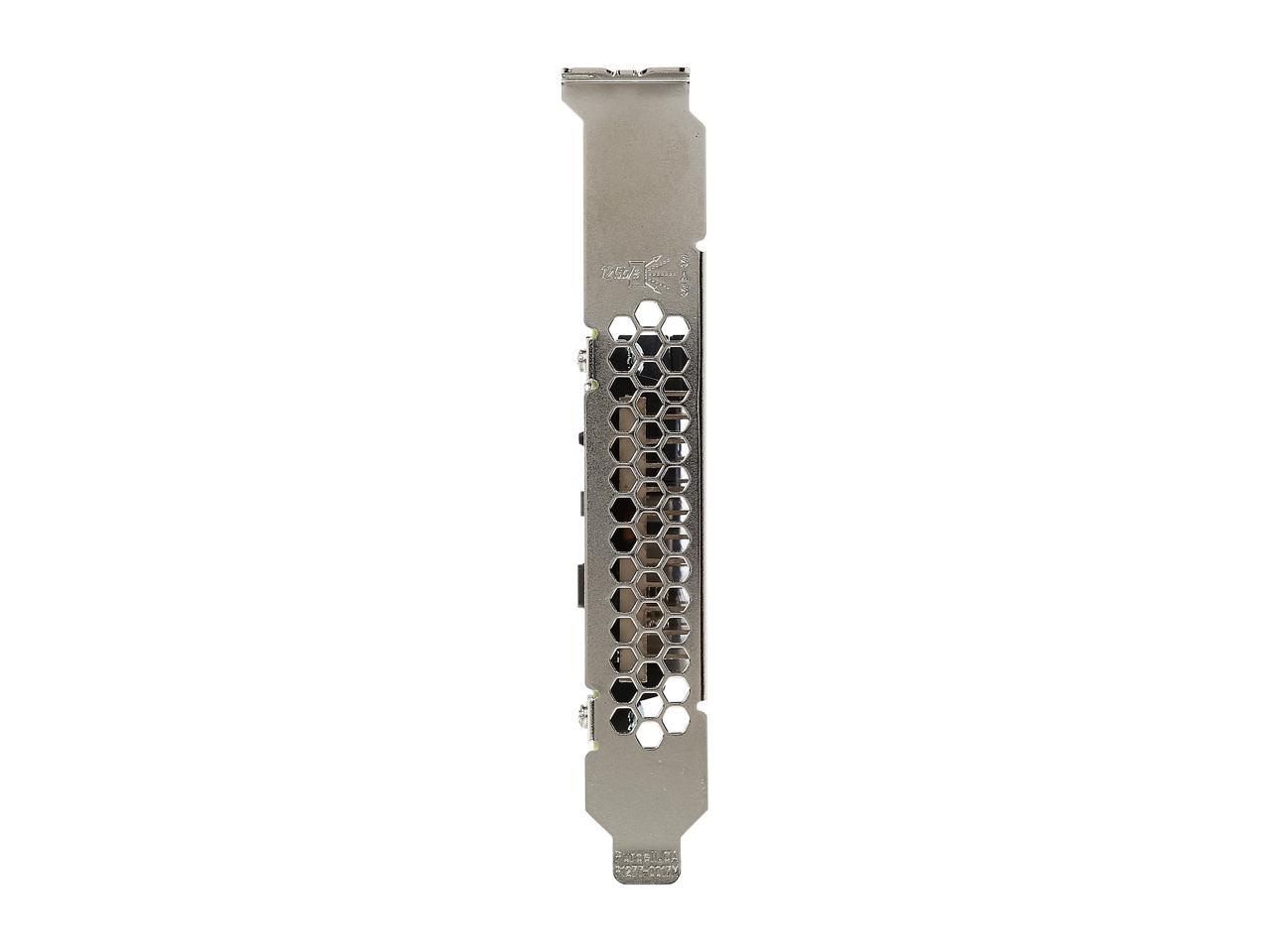 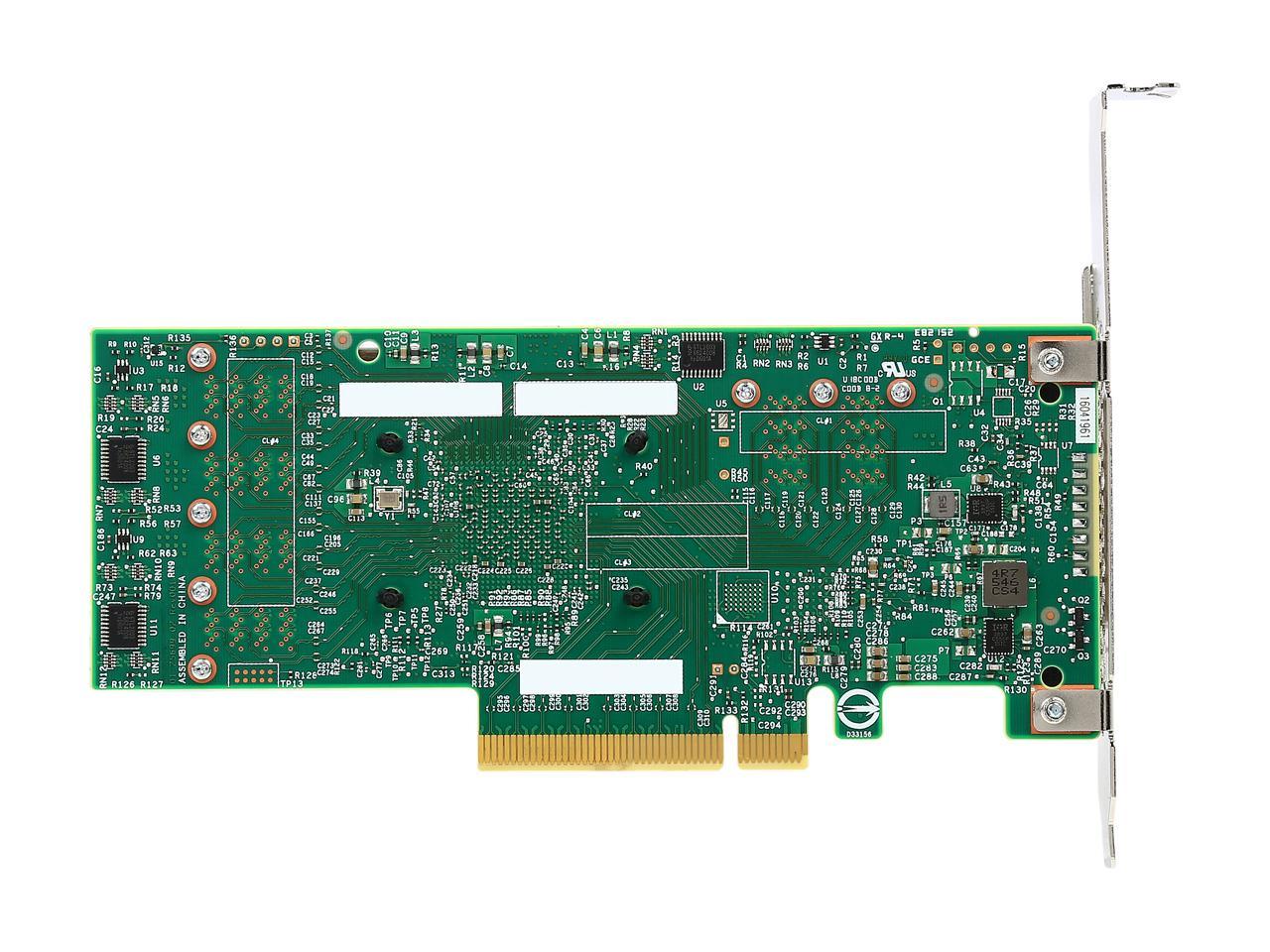 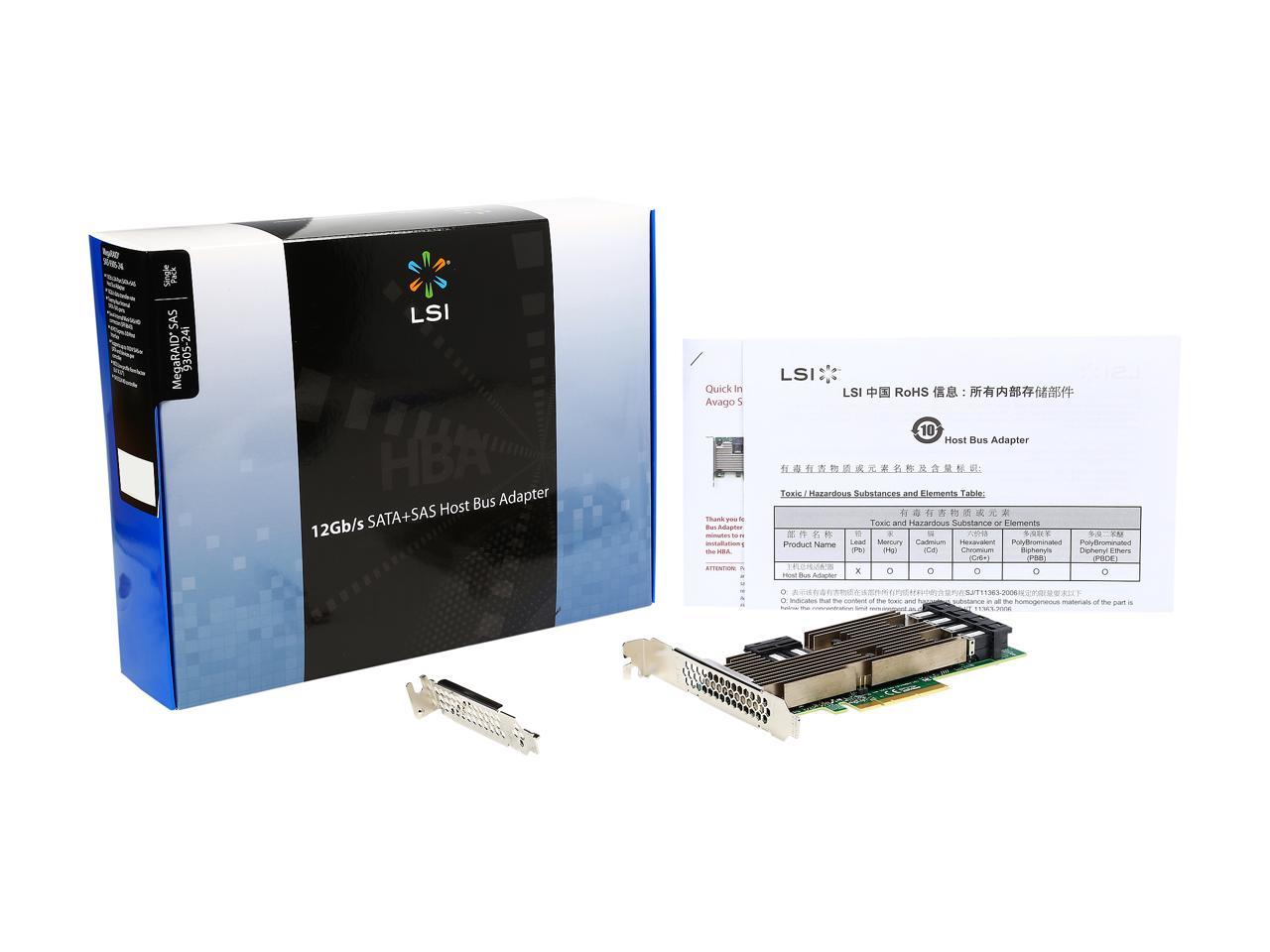 Pros: *12Gb SAS -- Insanely fast (was able to read ~7300 MB/s from a large SSD stripe V-Dev) *LSI so you know it runs flawlessly out of the box on Linux *It's not a RAID card, just a pure host bus adapter that doesn't get in the way *Absolutely perfect HBA for a ZFSonLinux box (probably works well on *BSD too) *Supports 24 direct connections to drives or passive/direct backplane, or up to 1024 drives through expanders

Cons: *Connectors on the "top" of the card may require a slightly longer cable/cabling *It doesn't support 48 direct drives?

Overall Review: It looks like the LSI/Broadcom/Avago fiasco hasn't affected product quality. This card just works, and works well. I haven't used this card outside of Linux, but *BSD historically has good LSI support and I imagine it would work fine under windows. I did have problems getting this card detected when it was in a x4 PCIe slot, but why would you limit such fine hardware in this way? This is an HBA--a Host Bus Adapter, this is *not* a RAID controller. These cards are for people who want full control of their RAID as opposed to handing control over to a black box. The production build: 1x Norco 4224 Chassis 1x Supermicro X10DRI 2x Intel Xeon E5-2620 8x 16 DDR4 ECC memory (M393A2G40DB0-CPB) 1x LSI 9305-24i 8x Samsung Evo 850 1TB (Raid-10 V-Dev) 16x HGST Ultrastar He10 10TB Platter Drives (Raidz2 V-Dev) 2x Supermicro Sata DOMS (mirrored) 1x EVGA Supernova 1000 G3 Modular Power Supply A buttload of Noctua fans Host operating system: Gentoo Linux The results: This system screams performance and is relatively quiet and cool. The central piece to this build is the LSI card; it ties in very nicely with the Norco 4224 backplane (mini-HD SAS to mini SAS connectors, nice and clean no breakout cables!) and manages to stay within acceptable temperate ranges even under heavy load. We use this system for virtualized CAD, MES, SCADA and PLC programming and emulation, as well as file storage. Our largest simulated environment had nearly 22,000 tags on scan every 3 seconds tied to a SQL backend and this system laughed it away during the effort. With a KVM hypervisor and ZFS managing the storage, you can not go wrong! If you run Linux, LSI is always your best bet. You can always count on their silicon for performance and reliability. Any of you FreeNas or ZoL types out there that want dense, scaling storage; this is your card. Way better than stacking a bunch of IBM 1015s.

Pros: This card replaced three 8 disk SAS cards in my system. This card simply just works without any issue. I have been running it for about 8 months with 21 data disks and 3 parity disks in a FlexRAID configuration that recalculates parity every 24 hours. Given how dynamic some of my data is the parity recalculation cycles can be a couple hours long and this card is rock solid with that really heavy i/o.

Cons: The one downside was I needed to replace my SAS cables as the old ones were 8087 on both ends.

Overall Review: Would definitely recommend this card for a home enthusiast that just wants a jbod setup.

Pros: Works LSI Logic controllers just work better than anything else on the market. Perform great, and work reliably.

Cons: - Can run a little hot. Make sure it has plenty of airflow - Unclear how you are supposed to use the top two ports in a half height system. (Luckily it was going in my 4U full height case) - Sometimes can be a little tricky to flash the firmware.

Overall Review: The above two sections say it all.

Cons: the card itself is low profile but the ports are not; 2 of the 6 sff ports would be blocked because they are at the edge of the card. unfortunate design.

Pros: Super fast file transfer Recognized all of my 24 WD 12TB HDDs upon drivers install without any issues. Comes in IT mode firmware preinstalled so great right out of the box. Extremely well constructed.

Cons: Poor Windows 7 support. All of my connected drives can be seen in my PC without glitch but Hard disk Sentinel that uses SMART and such won't read 4 of the drives (no Info) although drives are function as they should monitoring software will have hard time seen SMART with 4 ports, windows 10 has absolutely no issue, works perfect. Runs extremely hot, you absolutely need active cooling, 120mm fan blowing directly at it will keeps the card nice and cool at 30C-35C, otherwise is surpasses TJMax which is 55C within few minutes.

Overall Review: If you need absolutely the best, HBA extremely fast disk expansion only without RAID capability, this is amazing card. I absolutely love it and would totally recommend to anyone who is in the market for such adapter

Pros: Works like a charm with UnRAID so far.

Cons: Card AND cables are expensive