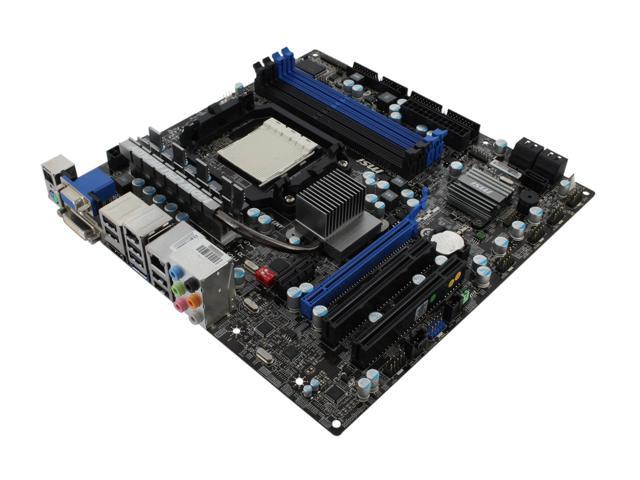 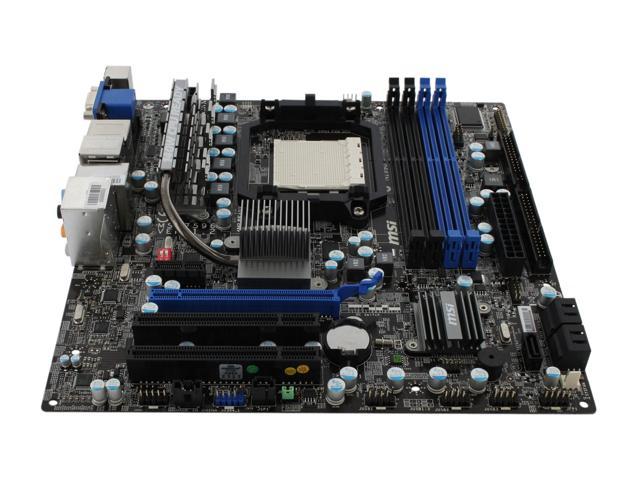 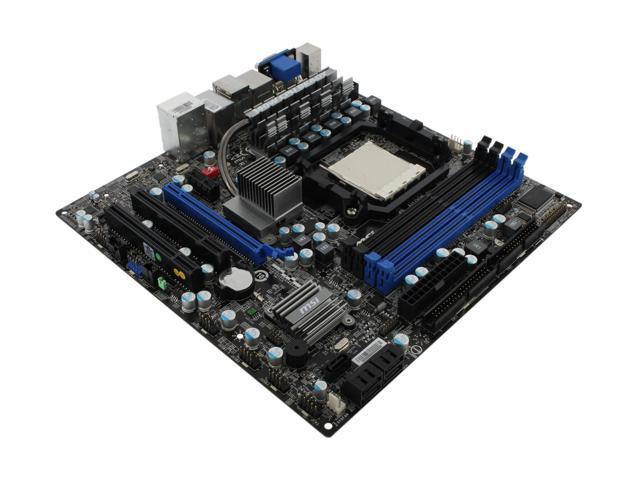 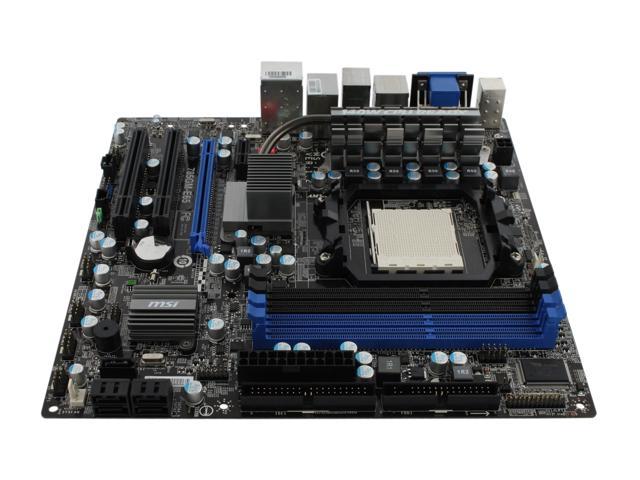 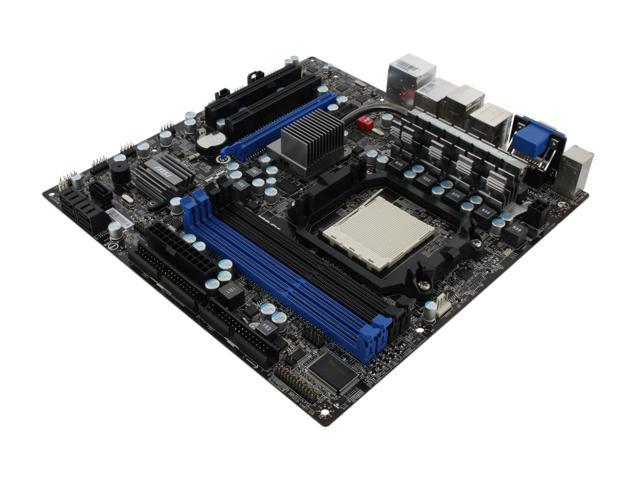 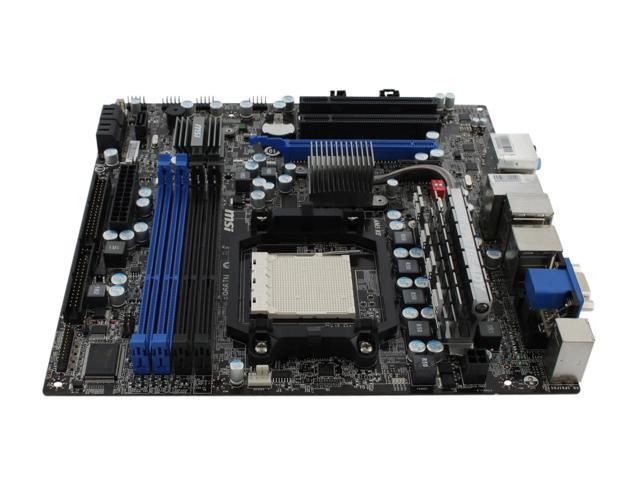 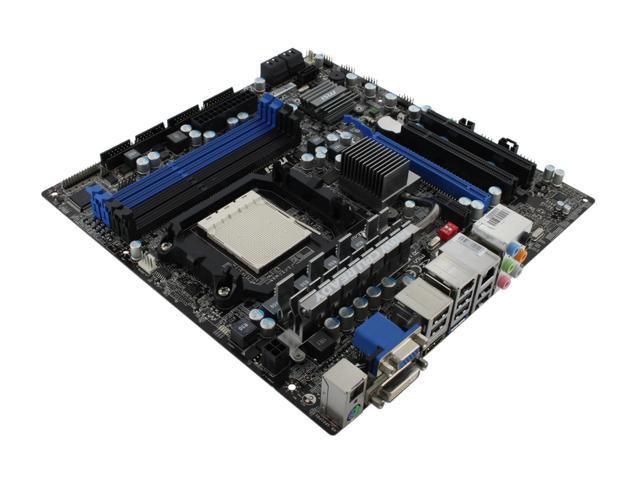 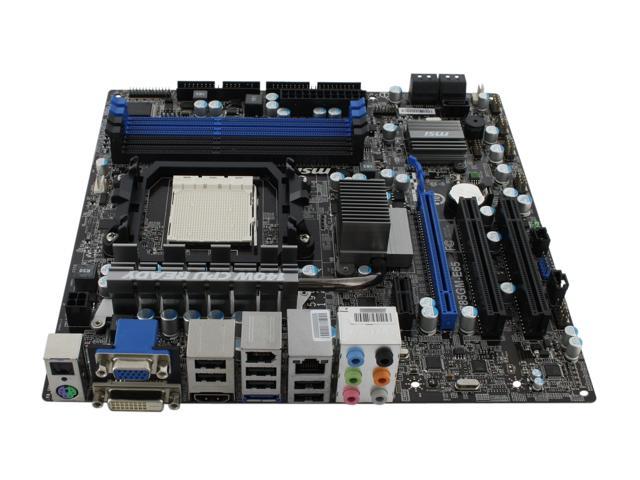 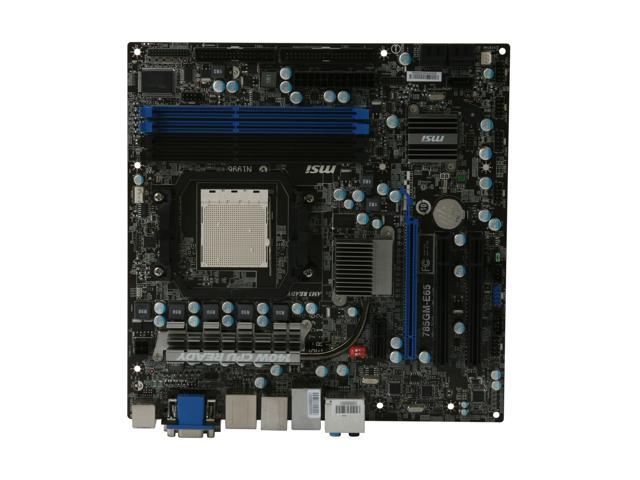 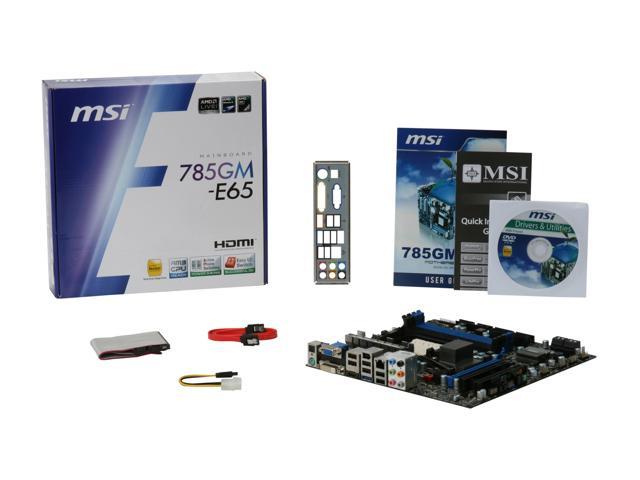 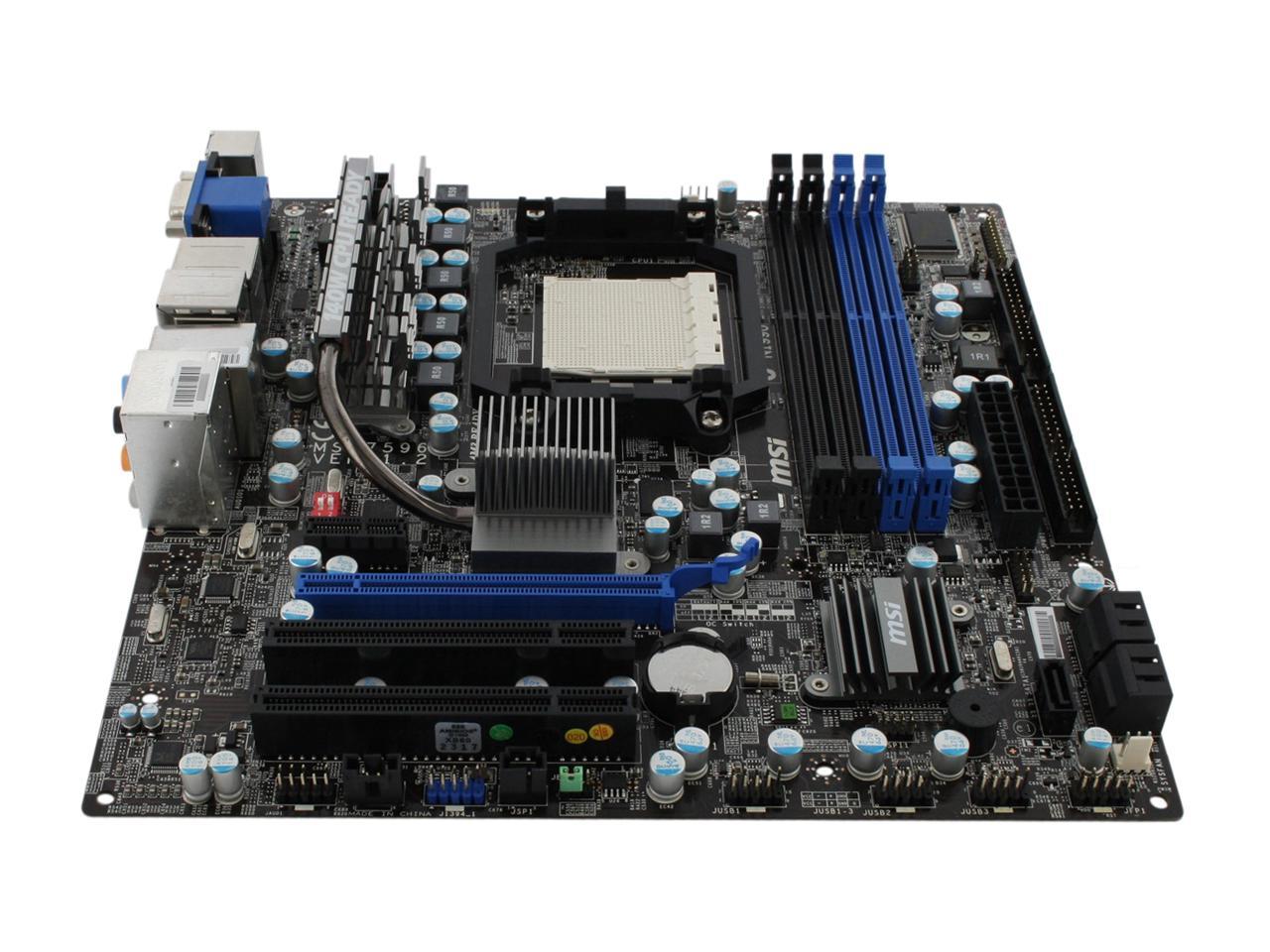 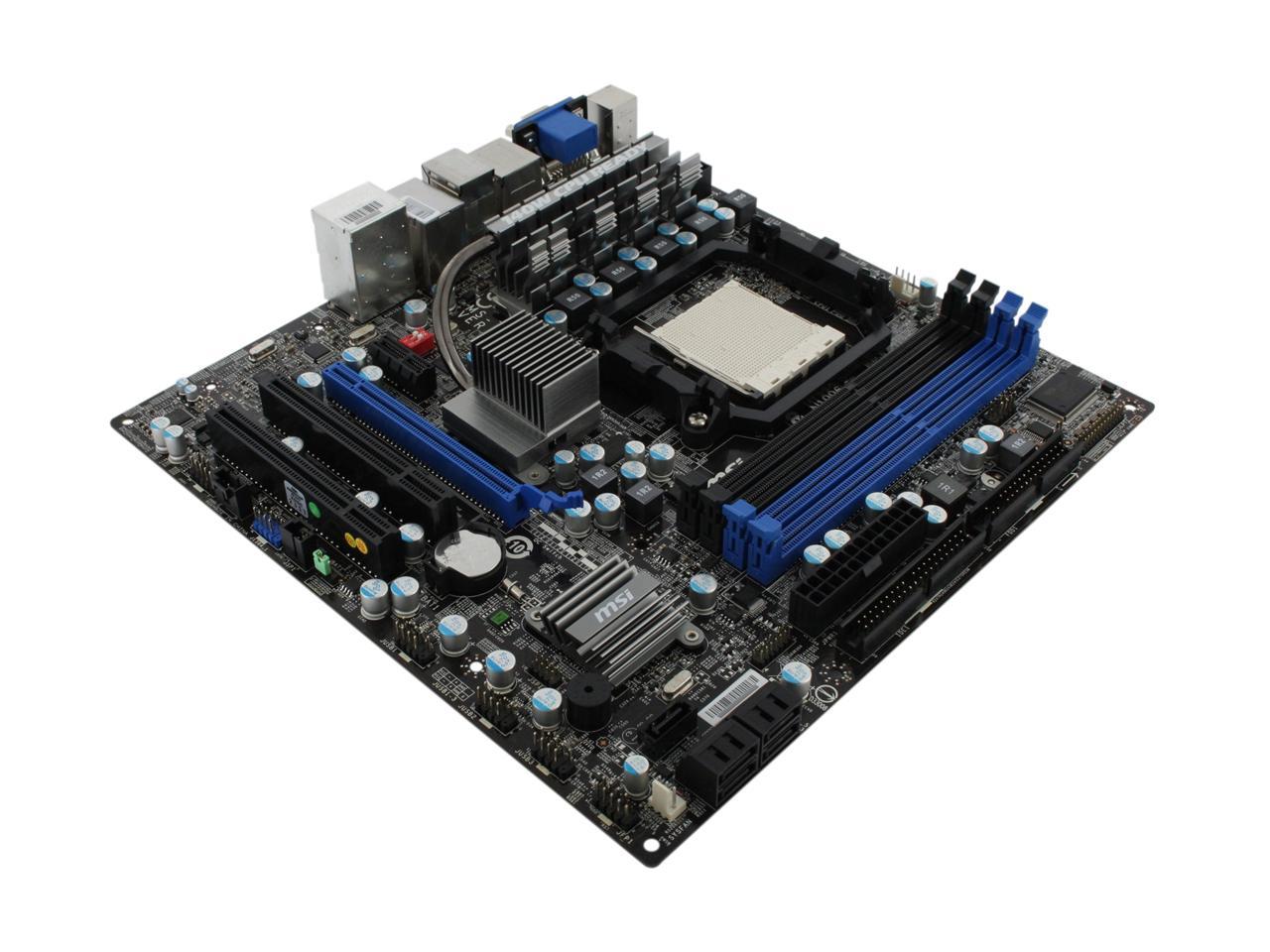 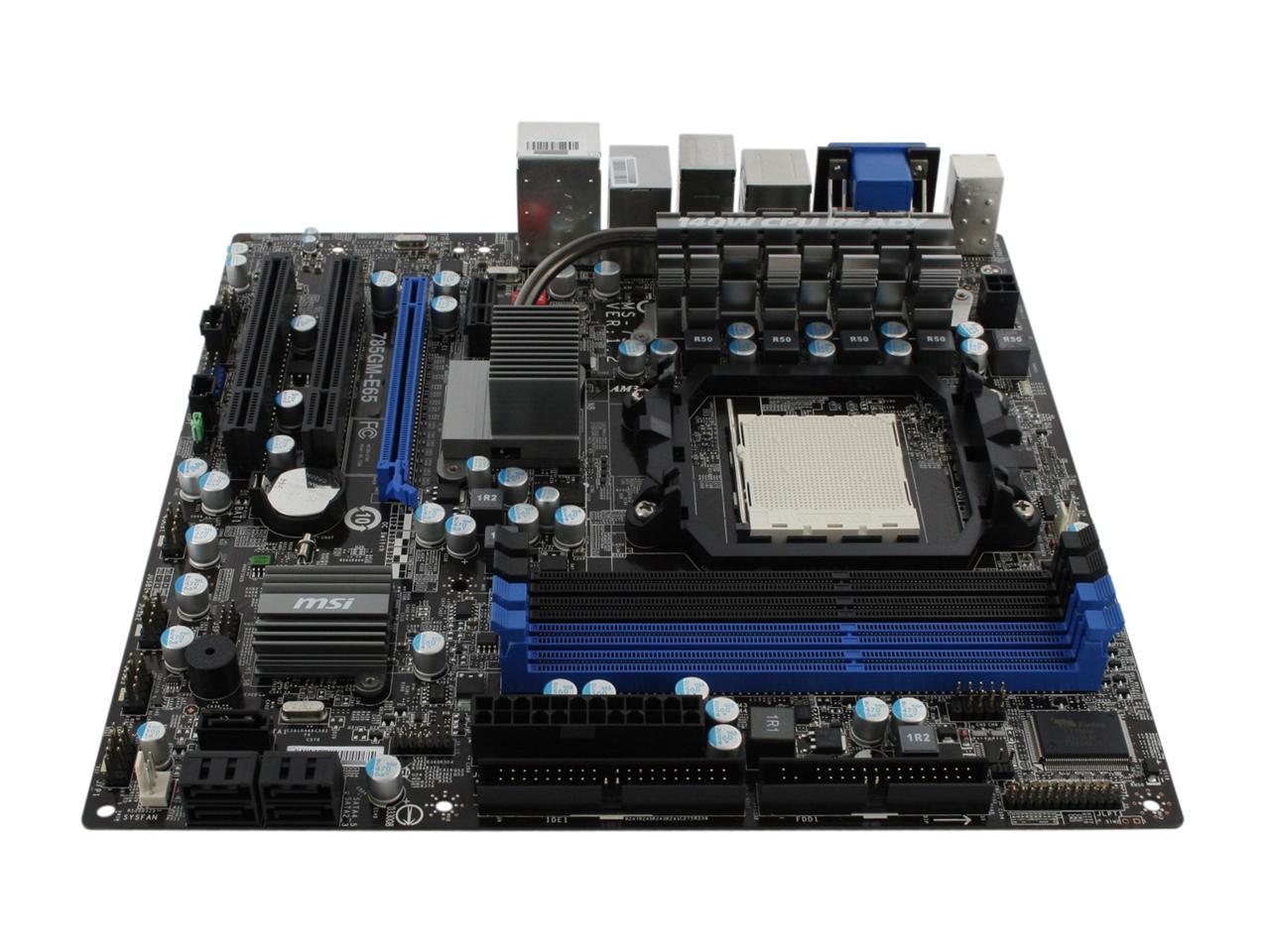 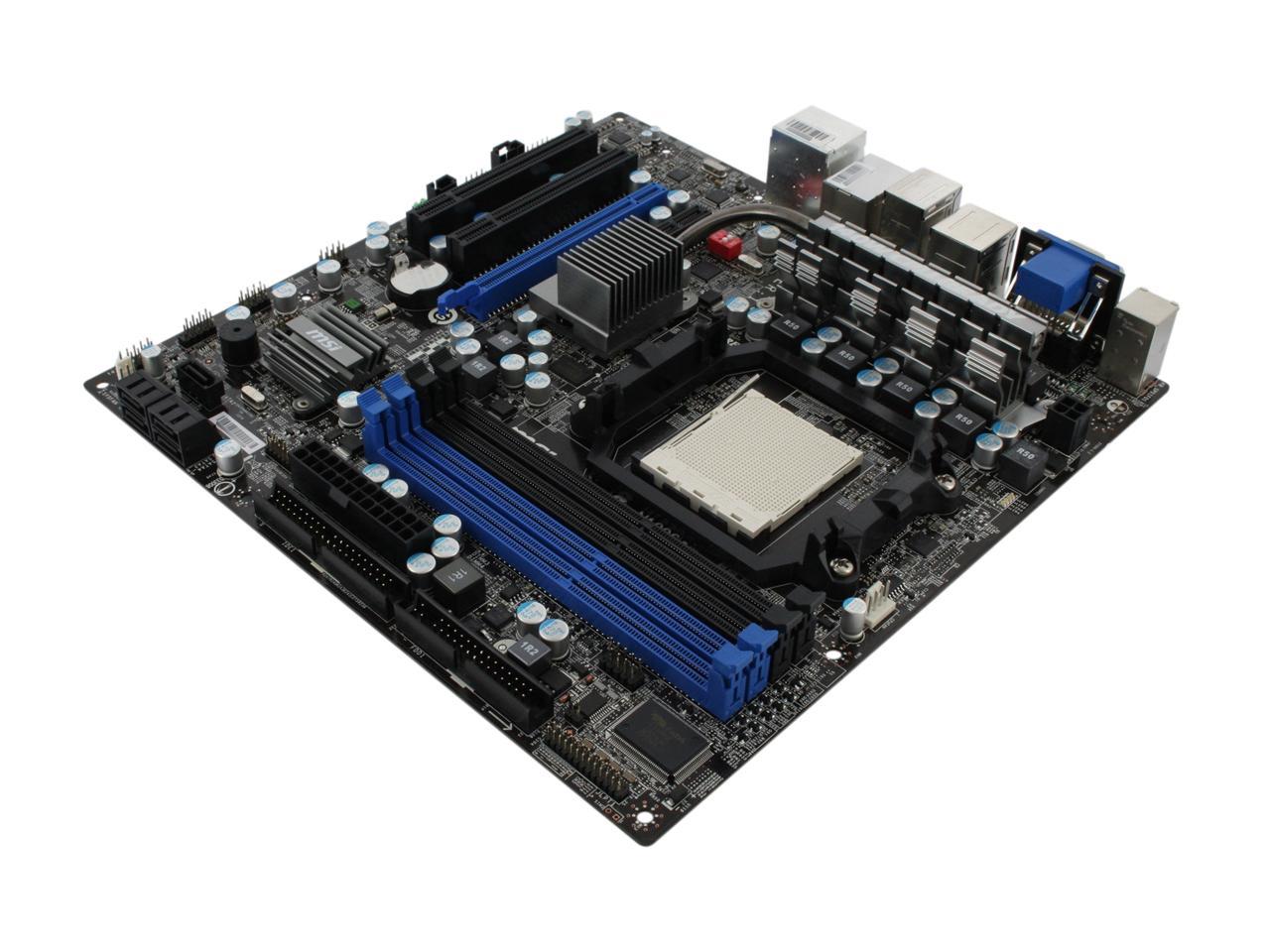 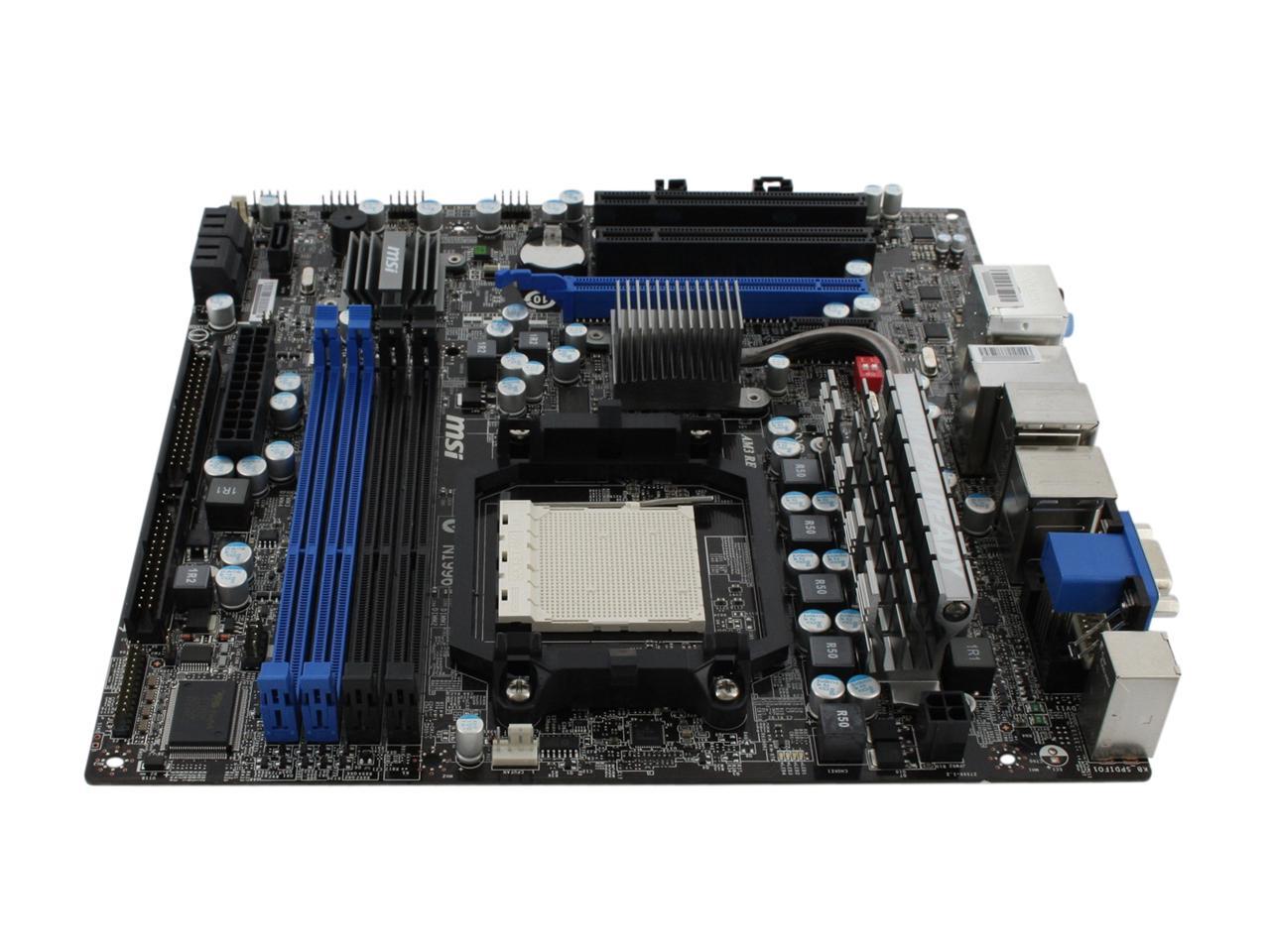 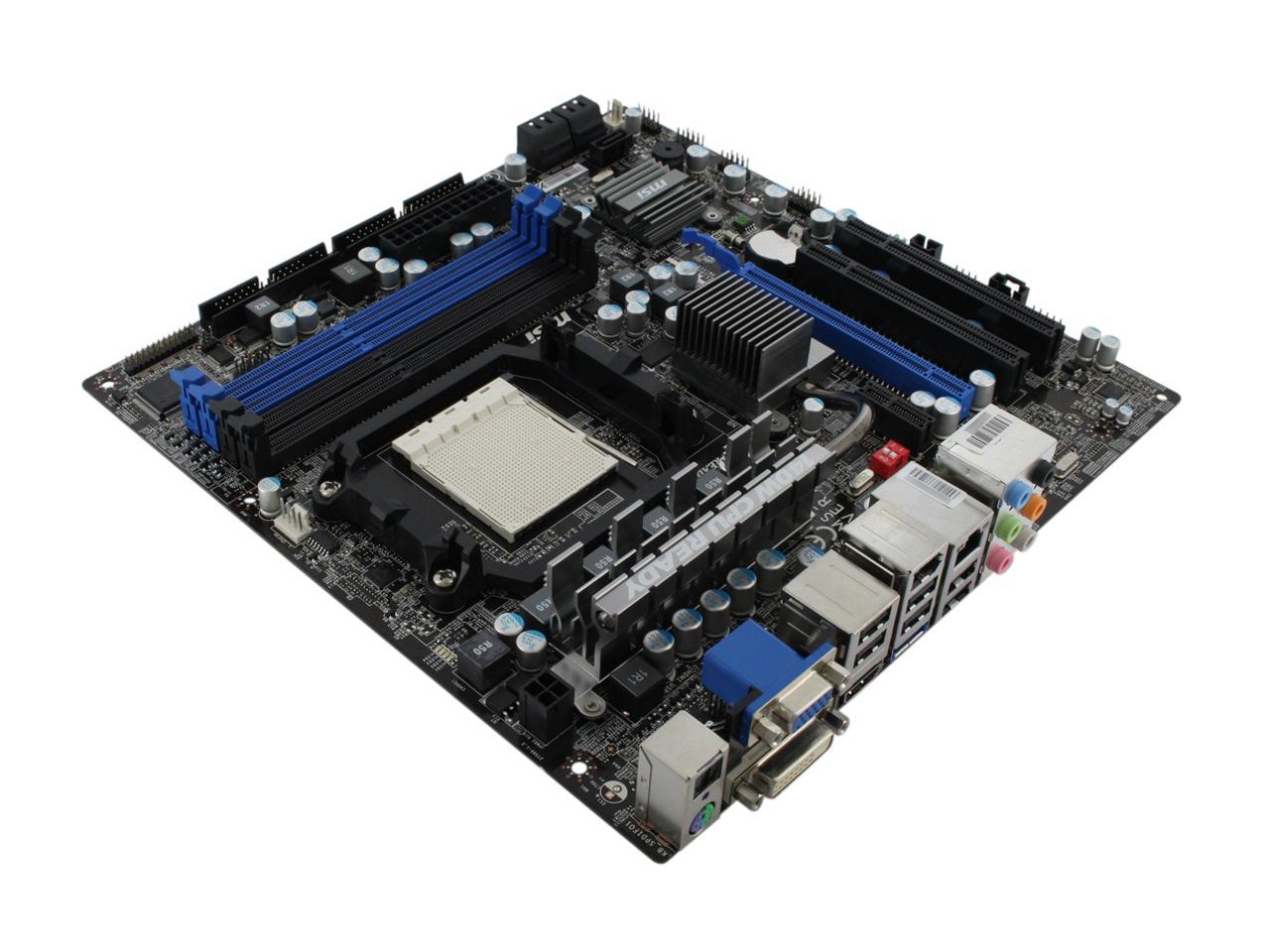 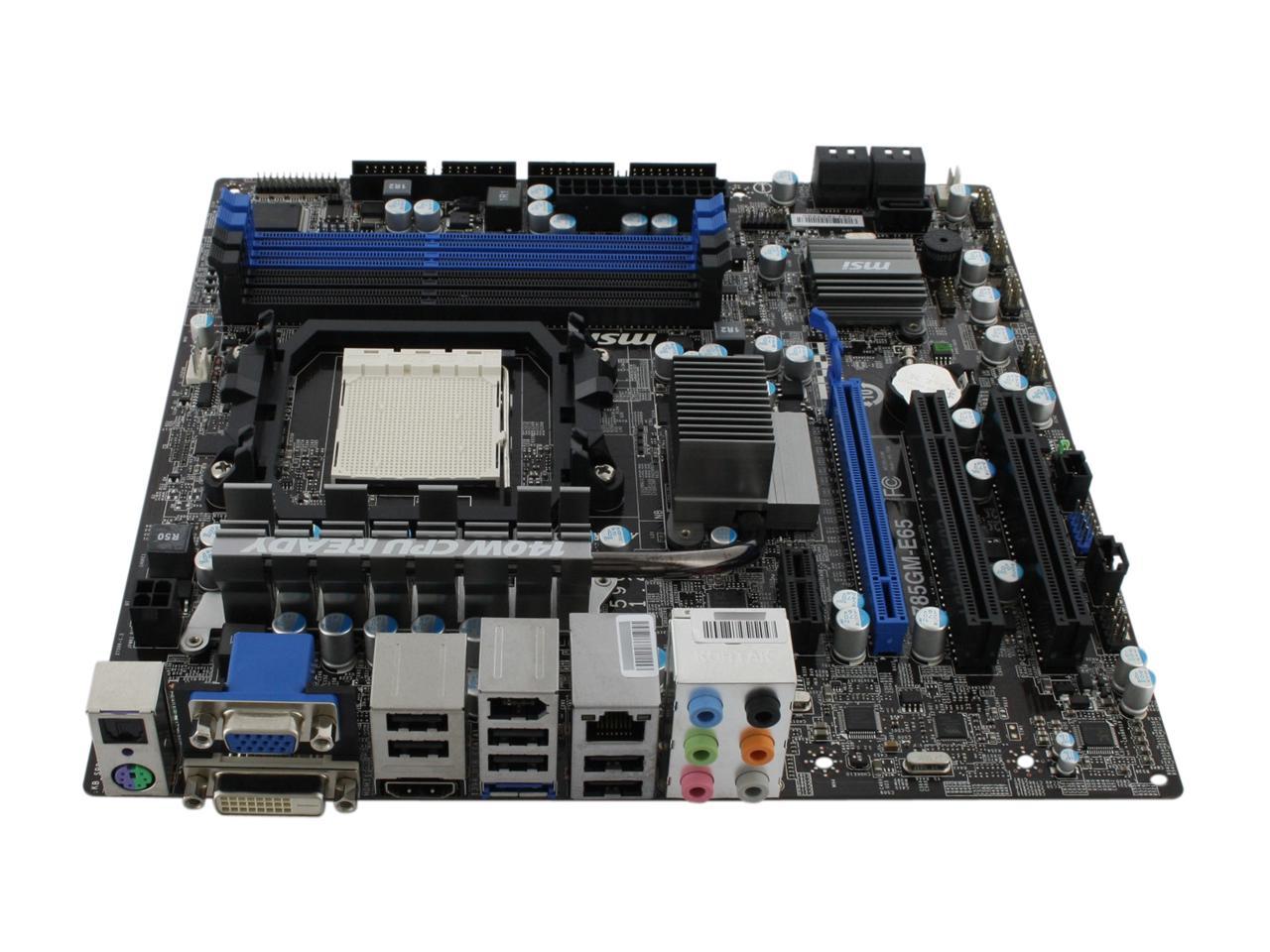 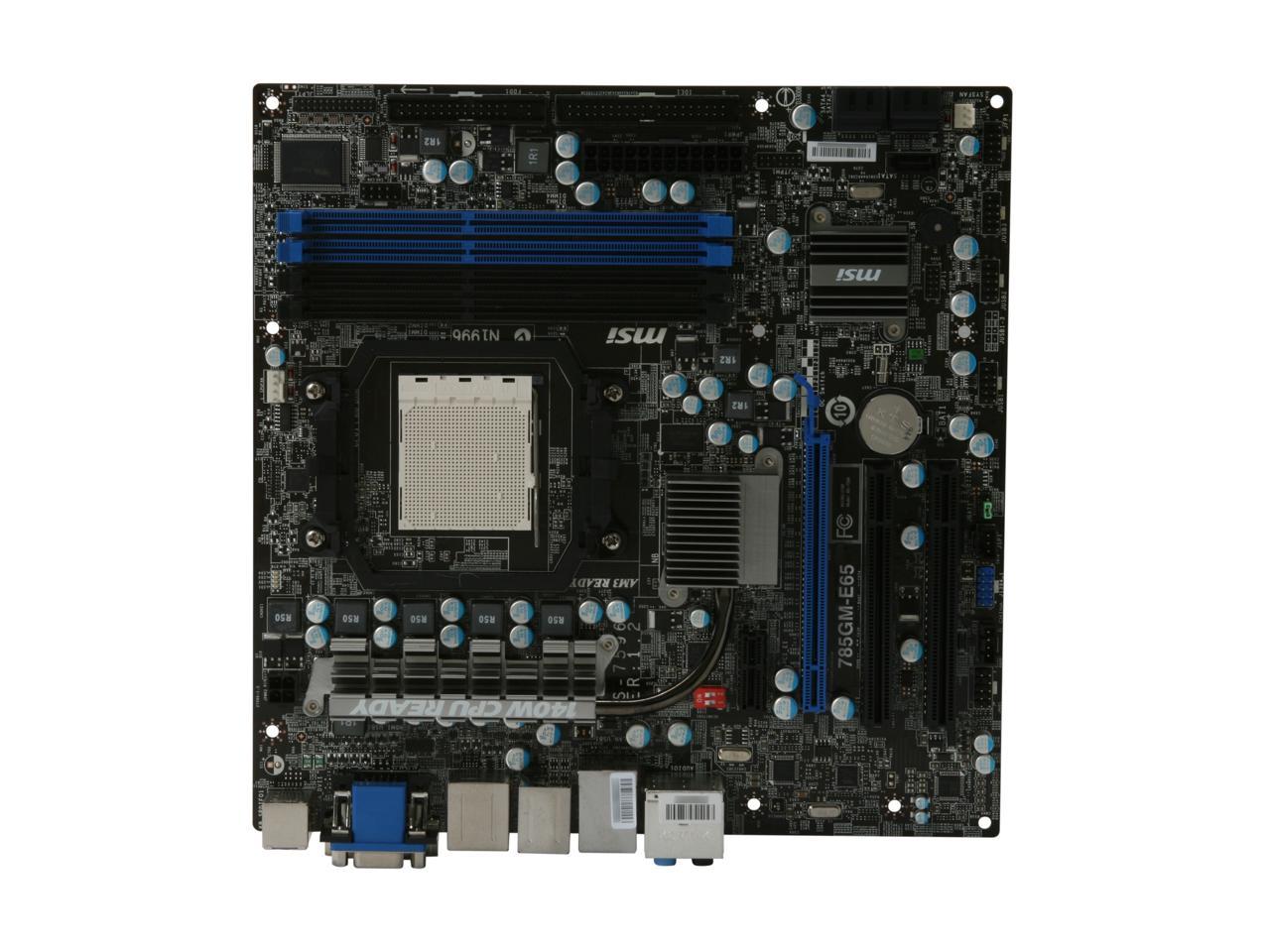 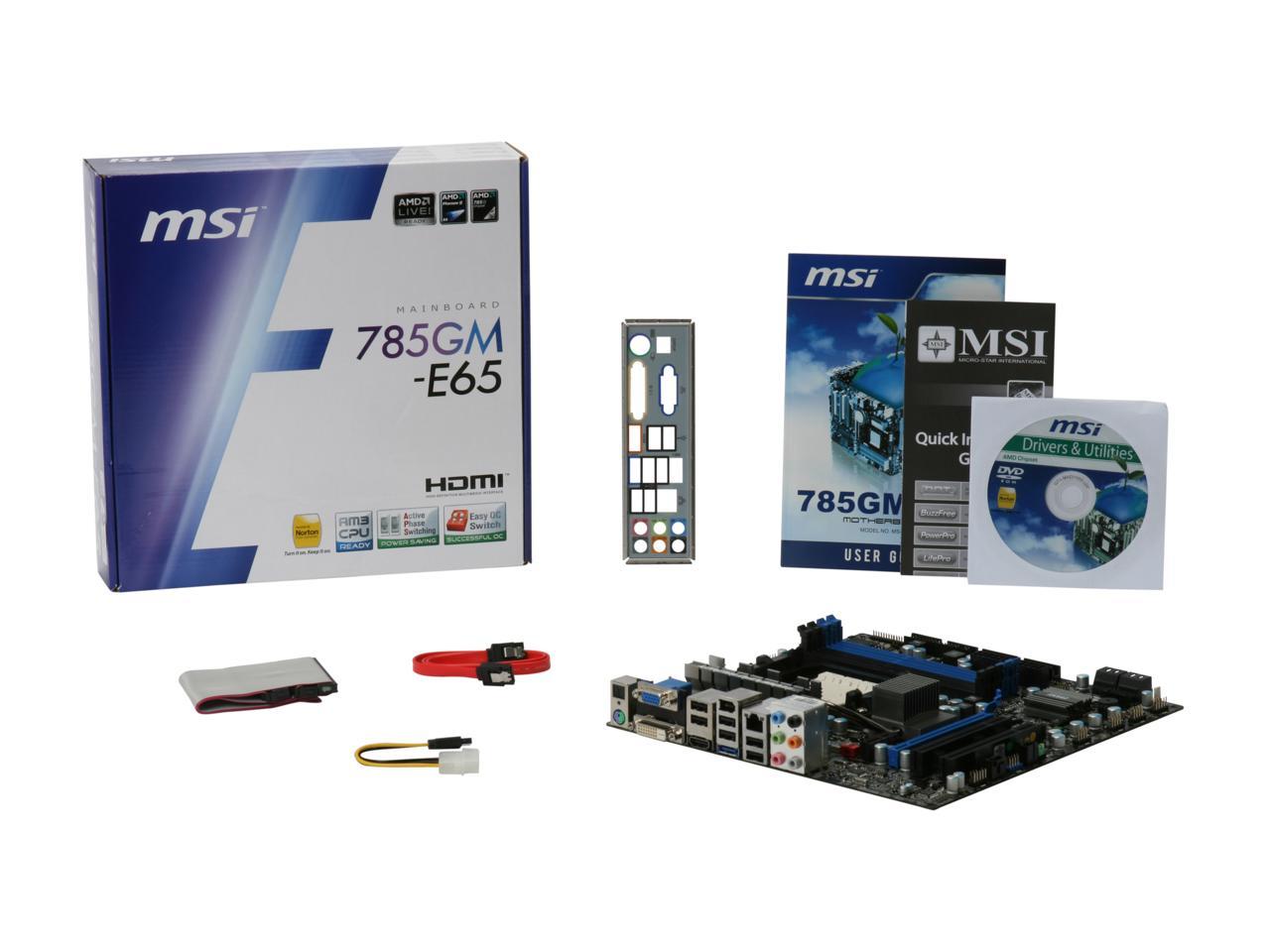 (80) Write a Review
OUT OF STOCK.
Overview
Specs
Reviews
Get affordable graphics and computing performance with MSI's 785GM-E65 AM3 AMD motherboard. Based on AMD 785G and SB710 chipset, this ATX form-factor board is designed to support the latest AM3 Phenom II, Athlon II and Sempron 100 Series processors.
Dominate your applications and games with up to 16GB of DDR3 memory fitting into four 240-pin slots with dual channel support and 2600MHz Hyper Transport technology for increased performance. Onboard Gigabit Ethernet LAN means that you can connect to other networked devices without running into a bottleneck.
Five 3Gb/s SATA connectors and one eSATA port give you the ability to store massive amounts of data locally with several RAID configurations possible for extra security and high-speed performance. Six USB 2.0 ports give you additional options in connecting and expanding your system.

Pros: DDR3 128mb sideport memory was a plus. Northbridge heatsink connects with ferrite cores heatsink which works rather well, and actually stays cooler (38C) then my girl friends Gigabyte 785g northbridge (40C) (Microatx also), The sata ports are not like the Gigabytes either, they are side ways which allows me to put a huge card if I please. I can also play the sims 3!!!

Overall Review: Just a thought, someone here asked if this board supports surround sound through HDMI, and it does. I got 5.1 channels through my reciever from my p.c. It will down grade the audio if its not digital sound, just like all other mobos. Setup: Phenom II X3 720 BE DDR3 1.5V Patriot 1333 ram (4 gigs total) WD 500 gig Hard drive. Hp dvd/cd burner All in one digital reader (internal) 300 Watt-power supply (which i will replace with a 500w Rosewell, since im getting a graphics card.)

Pros: Board appears solid in construction. Was a snap to put together, and booted the first time. I've only had this board for 1 day so I will update my review after 6months to 1 year. All drivers worked with Server 2008 64bit. I think the BIOS layout is excellent.

Cons: None really so far. The backplate on the board might interfere with some high end cooling systems that require a metal backplate; but it can always be removed.

Pros: Nice board, lots of features. Using for a media PC. The on- board graphics will run my 52" LCD for watching MKV files with no problem. They will not however let you play any current games.

Overall Review: If you are going to do anything other than surf the web or watch movies with this board, purchase a video card. HDMI audio works good.

Pros: Compact, fast, and small. 550 cpu and InWin BK623 case reduced real estate and noise. Graphics are probably lite for gamers, but gave me a 4.1 in Vista. I turned on the AMD power monitor, set to power save, and still have plenty of cpu for all common apps with a room temp cool computer. With a couple of clicks, I can max the cpu for the cpu hungry apps.

Cons: I was running an MSI 790GX ATX motherboard with my Vista software and did not reinstall. When I booted up the 785g, I deleted the ATI drivers. The new ATI drivers installed flawlessly, but the AMD drivers appeared hosed and stayed in a loop. I restored to the removed ATI drivers and installed the new ATI drivers only and everything appears to be working normally.

Overall Review: Newegg is great and I have yet to have a serious problem with MSI motherboards going back a number of years.

Pros: Like I stated in my last review, sata ports are sideways, not upwards. 5.1 dts,dolby,or windows surround audio through hdmi. The sims 3 plays smoother then my girlfriends gigabyte, but I guess its the side port memory which helps a bit. The temps are actually lower when not playing, it idles at 36C and during gaming it is 39C, with only 1 system fan in the back. Its way cooler then Gigabytes 785g 40C idle 48C gaming.

Cons: None, for once absolutely none. Even after extended use

Overall Review: I was a bit skeptical when I choose this MSI board over the gigabyte 785g/AM3/ddr3/micro one. I knew the quality of gigabyte and MSI has been lacking for a while, but MSI finally got it right and I can't believe this. This is a must buy 785g boards for micro atx fans.

Pros: Built two systems using this motherboard and both came up without a hitch! This is the first time I have used integrated graphics and I for one was impressed. We don't use our systems for gaming but do use them for office programs and occasional CAD design. I was impressed by how well the CAD program graphics performed under the XP operating system. Normal audio and video media playback is smooth.

Cons: The side facing SATA connectors forced a case modification to allow cabling access. The default voltage for the core and memory is set a bit high but you can set it properly in the BIOS.

Overall Review: I paired these systems with an AMD Athlon II X2 250 Regor 3.0GHz processor, Crucial 2GB (2 x 1GB) 240-Pin DDR3 SDRAM, SeaSonic SS-350ET Bronze 350W PS and XP SP3 Home operating system. The combination has been very stable so far. If you are a non-gamer, try it without an external graphics card and you may be surprised as well!

Cons: -SATA connectors are tight at edge of board. I recommend installing cables before screwing chipset to case. -PCI ports are adjacent to PCI-E (obviously), and any PCI-E video card is likely going to take up a PCI slot as well (big cards!) But this is common among mobos.

Pros: This mobo is a work of art and a worth while upgrade to even those that have an AMD 780 chipset as it allows the full potential of the Phenom II CPU using DDR3. Onboard video can play any game at high resolution and fast frame rates if you take time with in-game settings, such as no shadows. Adjust the video driver high, then back down to balanced it will perform almost as good as any dedicated video card.