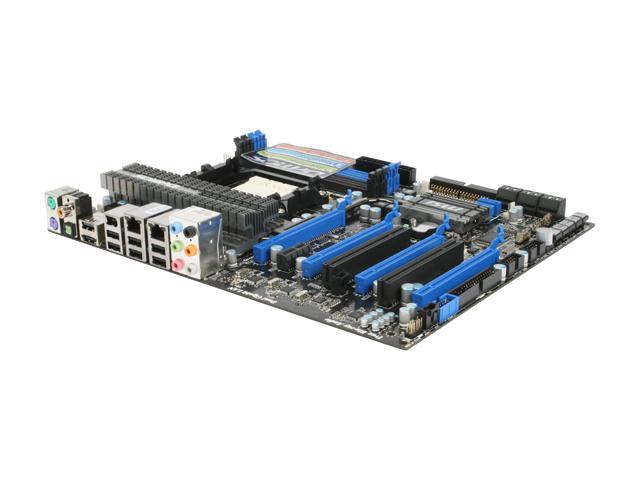 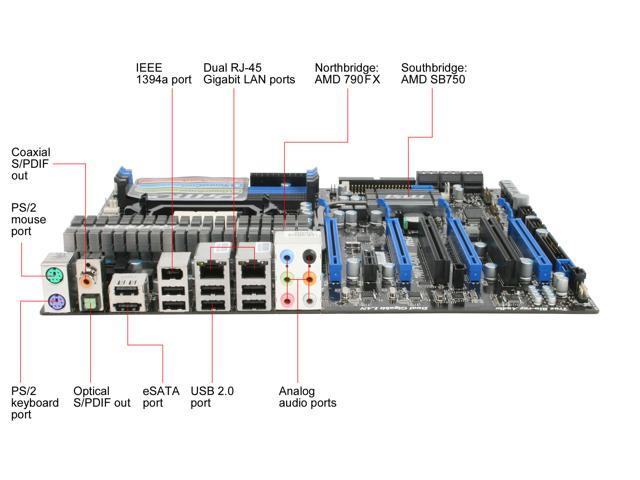 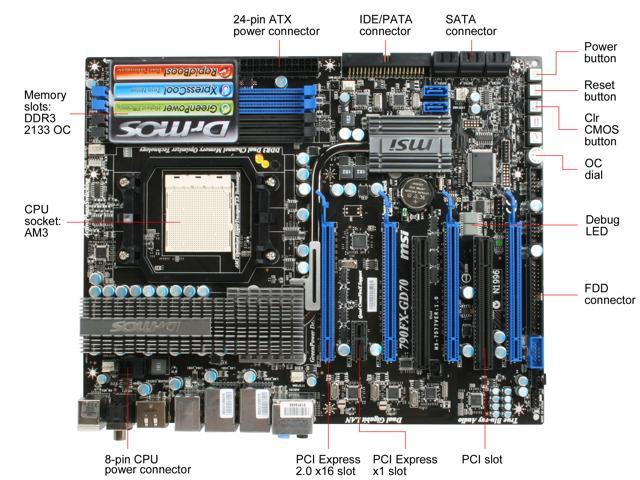 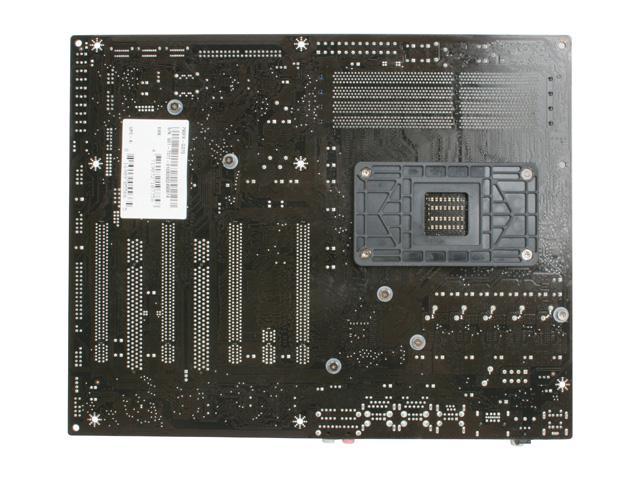 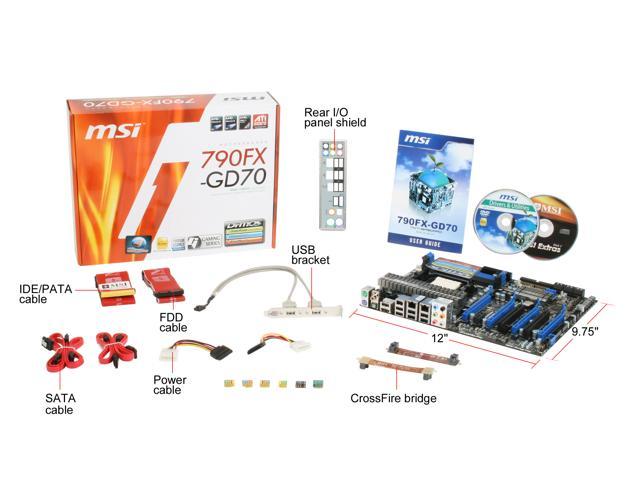 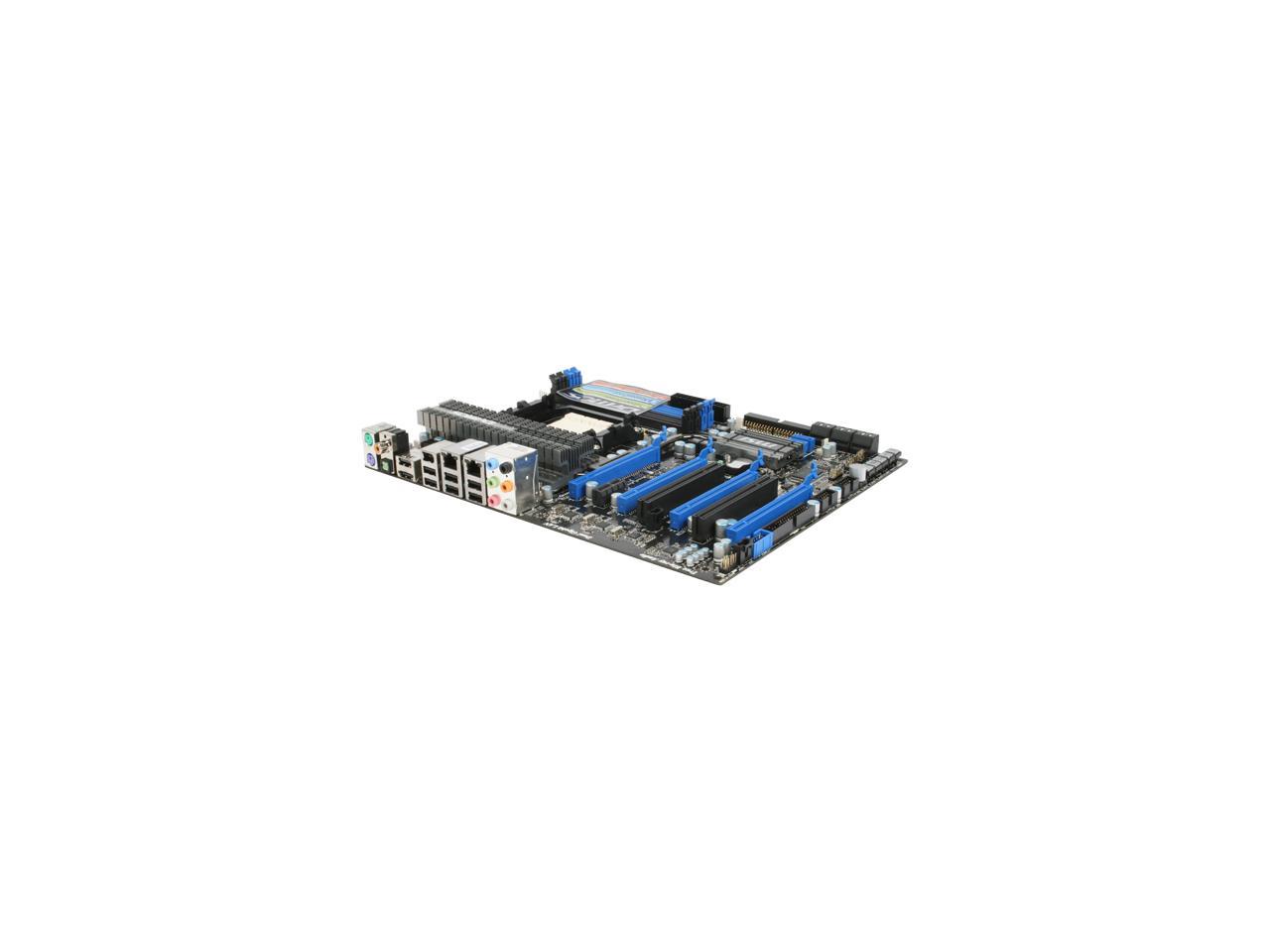 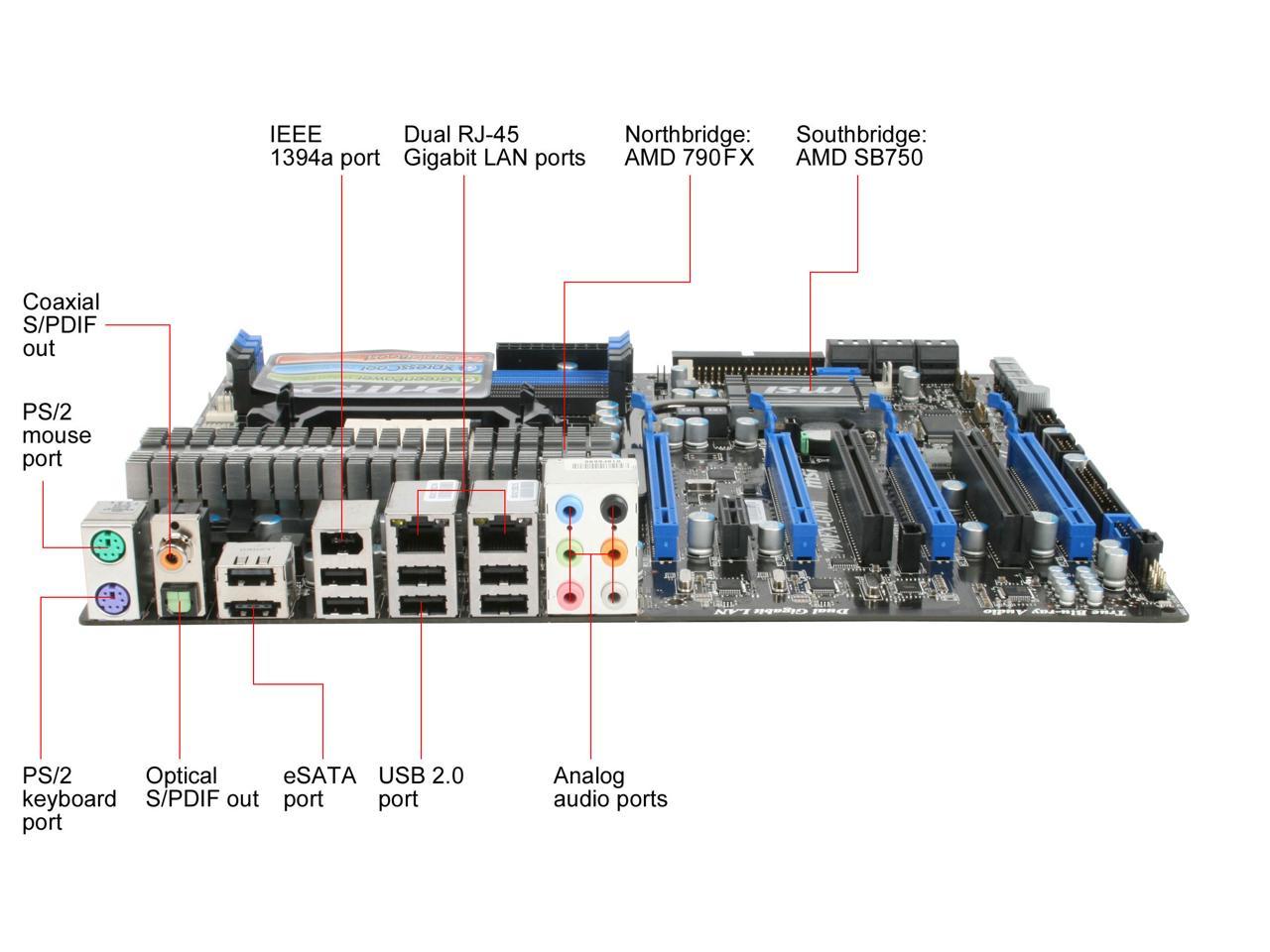 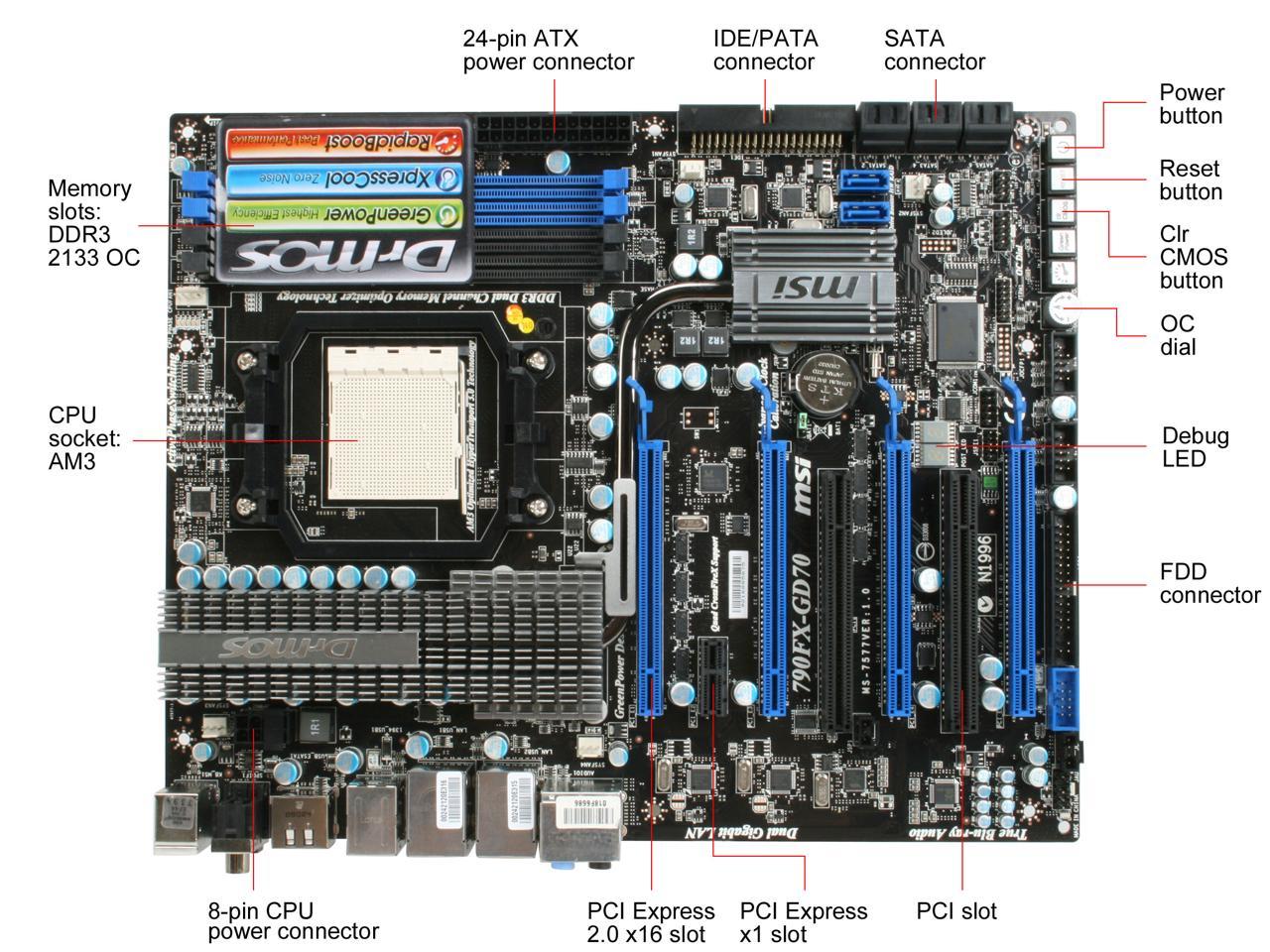 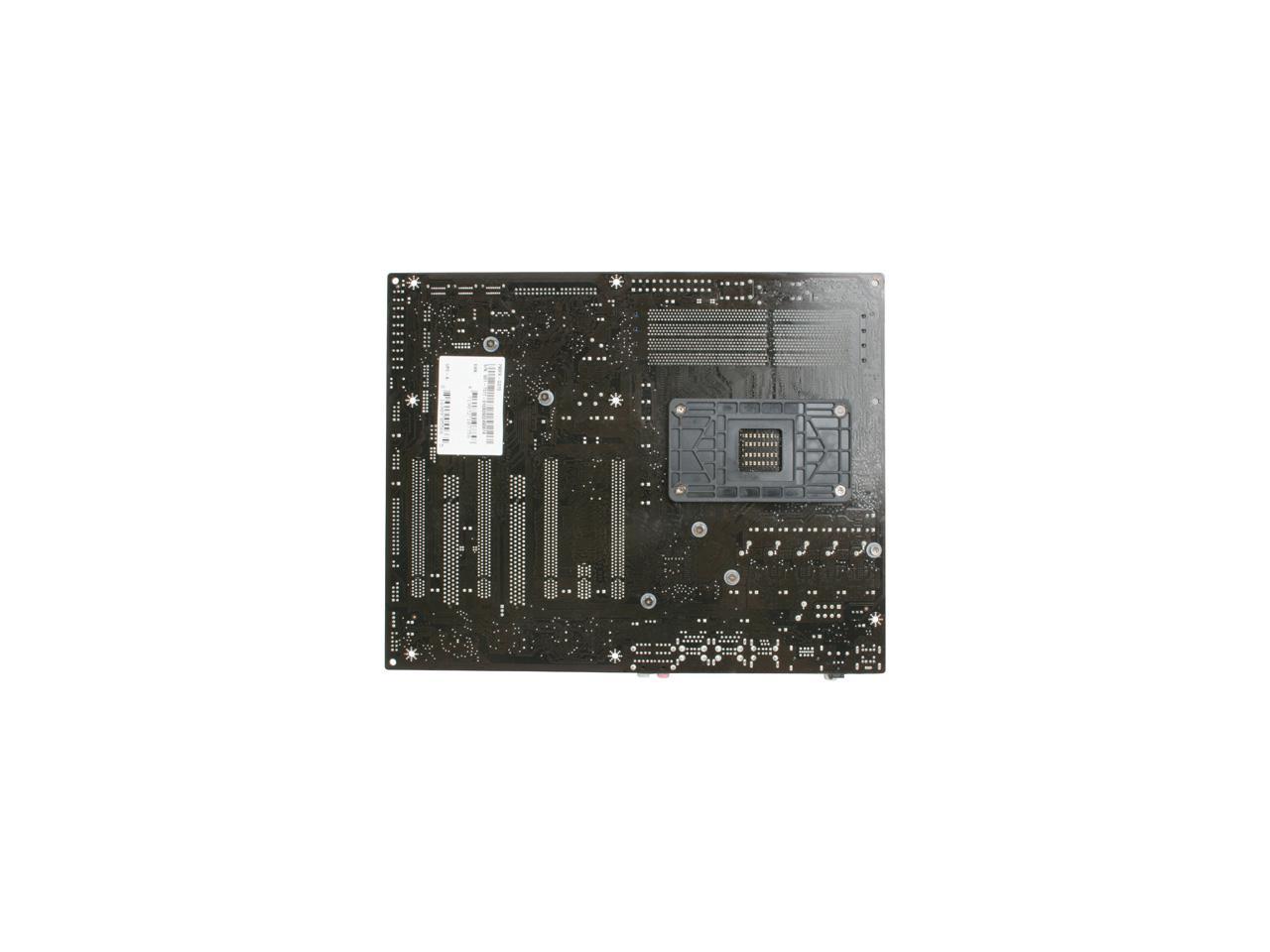 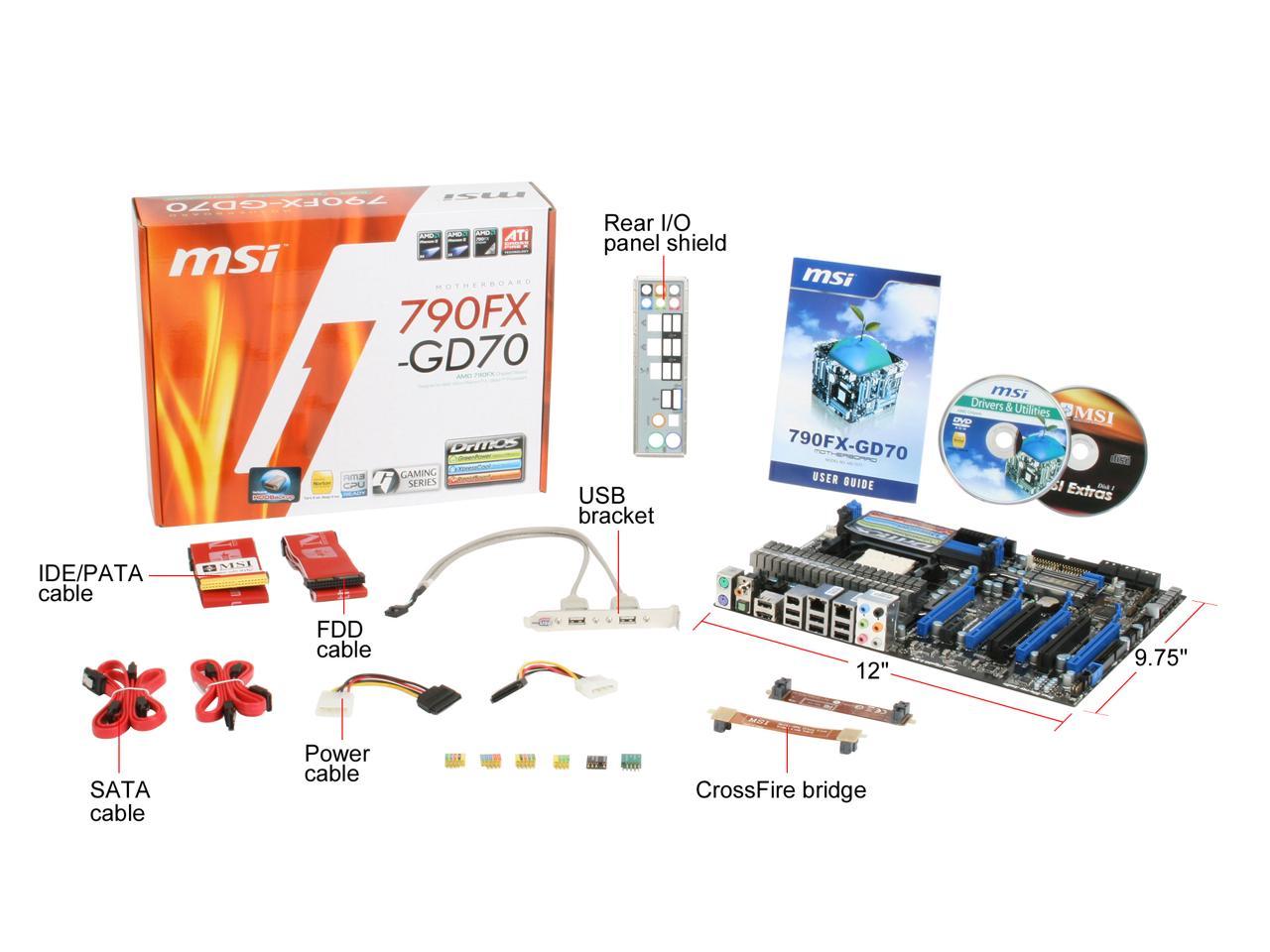 (567) Write a Review
OUT OF STOCK.
Overview
Specs
Reviews
Get affordable computing performance with MSI's 790FX-GD70 motherboard. Based on AMD's 790FX and SB750 chipsets, this ATX form-factor board is designed to support the latest AM3 Phenom II processors. With DrMOS OC technology. Instead of discrete MOSFETS and a Driver IC, DrMOS integrates all three into one package that takes up less space, uses less power and is much more power efficient.
Dominate your applications and games with up to 16GB of DDR3 memory fitting into four 240-pin slots with dual channel support and 2600 MHz Hyper Transport technology for increased performance. Onboard Gigabit Ethernet LAN means that you can connect to other networked devices without running into a bottleneck.
Four PCI-Express 2.0 x16 cards can be mounted for cutting-edge graphic power with support for quad ATI CrossFireX. Eight 3Gb/s SATA connectors give you the ability to store massive amounts of data locally with several RAID configurations possible for extra security and high-speed performance, and an eSATA port provides the same capabilities for an external drive. Seven USB 2.0 ports give you additional options in connecting and expanding your system.

Milton B.
Ownership: more than 1 year

Pros: Quality MSI made. Has taken everything I've thrown at it over the years.. overclocking, Crossfire, changed CPUs..X3 720BE to 1090T, and unbelievable hours of dependabliity. The #1 790 series board in all reviews for overclocker Geeks.. like me.

Cons: Not a one.. except, it got out dated by progress. That will never end.

Overall Review: I waited for this to become available, and if you look I wrote the 1st review here, and believe bought the very 1st one from Newegg on release day.I read about it, and I was ready for a upgrade. Not even available anymore here, but I wanted to write a review telling that.. From the day available for sale to today, and it's still in use. That's says a lot about MSI and how awesome this board is. lol... it's running my HTPC now. My 1090T is in my 990FXA-GD80.. the X3 720BE is back in.. my success with this one made it a no brainer to get the newer version. And now the 990FXA-GD80 holds a world record for OC... Go MSI! One of the best board purchases I've ever made. I've owned a lot of MSI boards over the years. Started building with a 939. A slight OC, and the X3 720BE is all it needs, as an HTPC. (second PC).. on it now :)

Pros: I work on computers every day for me this stuff comes natural. Most of the complaints I read are from not reading the instructions or lack of computer expertise that A+ or higher professionals like me already do all the time. The OC dial does not work until you enable it in the bios for the guy below. Clear cmos works if you hold the button in while power is on. The amd 965 works with version 1.4 bios. I am typing on it now.

Cons: For the not tech savvy this level of features might be too much. But for the person who wants to squeeze every last ounce for OC this is a power users board period. The 790 ultra boards are the same way when not setup right. All ram must be planned in advance for the specs of ddr3 boards. If you OC on this board you need AMD approved ram such as the OCZ amd edition or Patriot AMD 790FX tested. Mushkin and Corsair also make like products.

Pros: This is one action packed motherboard, has to be one of THE BEST boards that I have ever used ! Accepts ddr3 memory and yes ddr3 1600 will work on this board. The layout of the board is great, has firewire which the dfi lanparty boards dont have. Haven't used the oc dial as of yet, no need to since the bios makes overclocking fast and simple. Just read some online reviews and you will see why so many are saying this is the best am3 bord on the market as of now.

Cons: Only one thing i can think of The onboard sound pins are at the bottom left of the board ( I had no problems using Xclio 360plus case very long wires)

Pros: Purchased recently for a new custom system with Phenom XII 955. This board has plenty of room for expandability. More onboard control features for overclocking than I will ever use. Setup was quite easy and straight-forward like any other motherboard I've installed.

Cons: Only two things bad with this board so far. First off, just after receiving the board I began having problems with failing to boot properly and the CMOS would suddenly be reset when it rebooted. I bought a new CMOS battery to replace the original and re-secured all the power connections and everything worked perfectly after that. Second, the hardware RAID ports (7 and 8) pass through a single PCI-e lane limiting the overall bandwidth that could be used for two hard drives connected to them. For this reason I don't really use them, though if I should I would only put one drive on it.

Overall Review: In the past I have not been a fan of MSI boards, but I took a leap of faith with this one and it has paid off. Great board with very little problems and more than enough power!

Pros: - Well laid out. - The method for wiring in the case power and LED's makes installation a breeze. - Buttons prove useful for resetting the bios while overclocking - Digital display is great, and having the temps displayed once it's running is pretty snazzy if you have a windowed case. - Great looks (again, a windowed case thing). - Easy to upgrade the BIOS

Cons: I have not run into any issues at all with this board. From an aesthetic stance, all of the LED's on the board are blue (the digital display is green), so if you're trying to do an all red lighting thing, that might possibly matter. As is common with MSI boards, some of the settings in BIOS have to be set with the +/- keys on the number-pad (and only the number-pad). Newer OC'ers ask about that a lot. For anyone reading that might not be aware, nVidia SLI is not supported. This is an AMD chipset thing, not something specific to this board. If your looking AM3 and want SLI, you'll need to wait for another chipset.

Overall Review: This is probably my favorite board out of all that I have installed thus far. It's a very simple board, it's laid out well for dual ATi cards in Crossfire, and it even manages to look great! I've been building systems since the mid 90's, and this board is simply excellent. Obviously an OC friendly board.

Pros: I thought it high time I write a review on this Mobo. I bought it here on Newegg back in 2009 along with the AMD Phenom II X4 955 BE CPU and I'll be darned if these jokers aren't still running like champs! I've been contemplating upgrading,but why? I don't know, I guess I just have googly eyes for new tech, but this build along with 8gb 1600 DDR3 Ram has been running solid since that time with all kinds of gaming power. I think I have gone through 4 GPUs in the time I've owned the CPU/Mobo combo. Good stuff! I now have it on Windows 10 without issues (at least hardware issues...stupid microsoft auto-updates). Thank you MSI for a cheap solid build for cost conscience gamers!

Overall Review: Way to late to buy, but if you can grab new (unlikely) then pair it with a Phenom II X4 955 and be happy for years!

Pros: This is just an amazing board. Way too many options in the BIOS than you'll probably never need, but if you need to make an adjustment it IS there. Plenty of room on the board, and it runs COOL. I'm still using the OE AMD processor fan. Easy overclocking, but tricky with RAM settings (as are most all AMD boards). I tested with 4GB and 8GB ... I prefer the 8GB RAM with mild overclocking. Be sure to MANUALLY set your RAM settings in the BIOS. MSI gives you everything you need with this board. They even included the correct length Crossfire straps (The XFX ones were too short).

Cons: If you want decent sound, buy a good sound card! DO NOT rely on onboard sound. Today I finally gave up on the Realtek ALC889. Every few days the driver would puke and sounds were distorted with pops and noise. I went and pulled the "ugh" Creative ExtremeAudio SD0460 card out of another PC, installed it with Vista 64 Drivers and the sound improvement with this older card is VERY obvious. It is pretty sad that claimed HD 7.1 out of the Realtek is not better than this ancient card. NOTE: Speakers are Logitech G51, and headset is Turtle Beach 5.1. I'll be getting a new 192KHz card soon to take advantage of the rest of this system. Maybe the HT Omega Claro 7.1, not sure yet. I do wish MSI's instructions were written by someone that explained things better. They provide an awesome board, but the instructions are written for a bare bones setup. The cover of the box has more details on some features.

Cons: 1. It refuses to raid my raptors with either chip, any copy of drivers I could find with Win7x64 or XPx64. "hide incompatible drivers" wouldn't even work. Bios is 1.3 2. The dimms are tight - for dual channel adjacent slots have to be used. 3. PWM section gets hot! Don't know if this is a 5 phase issue or an AM3 one.