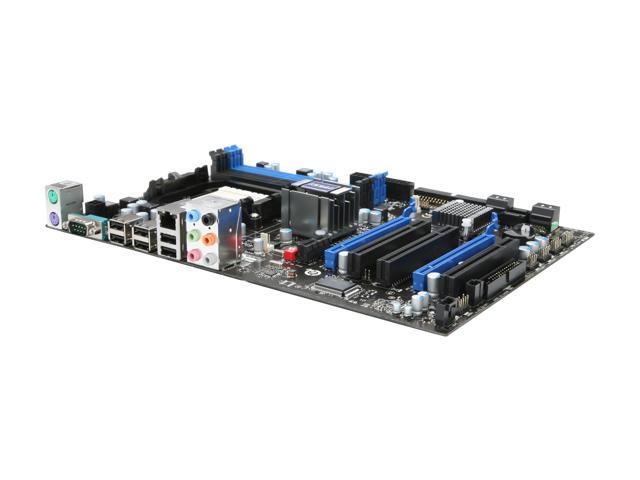 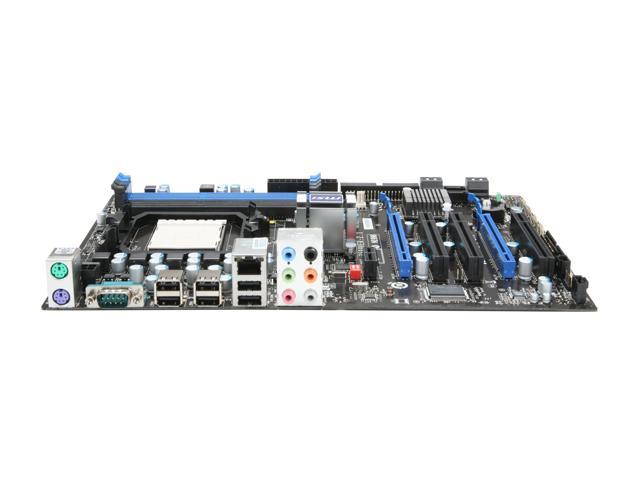 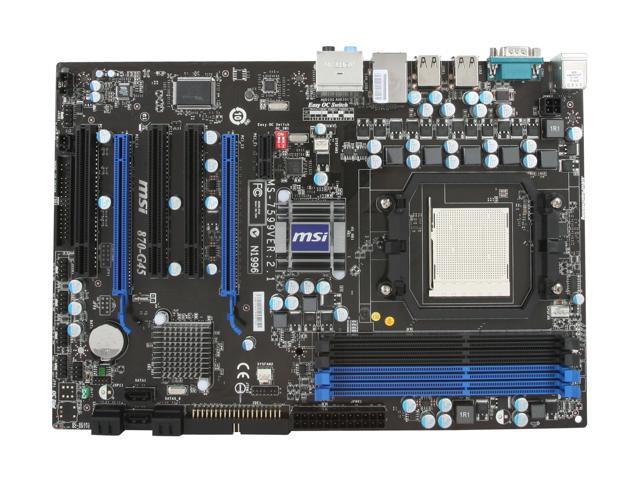 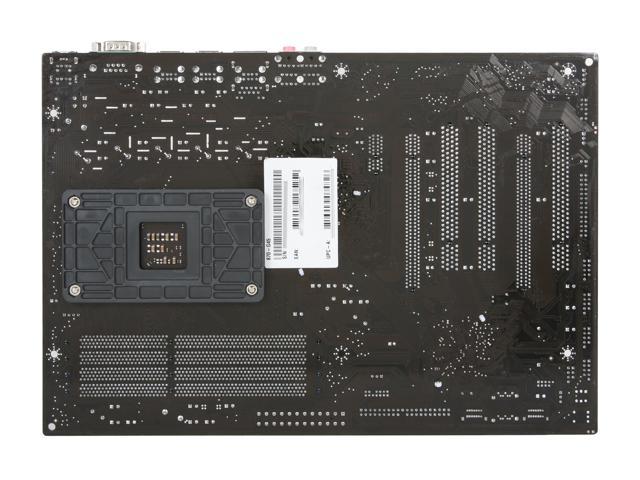 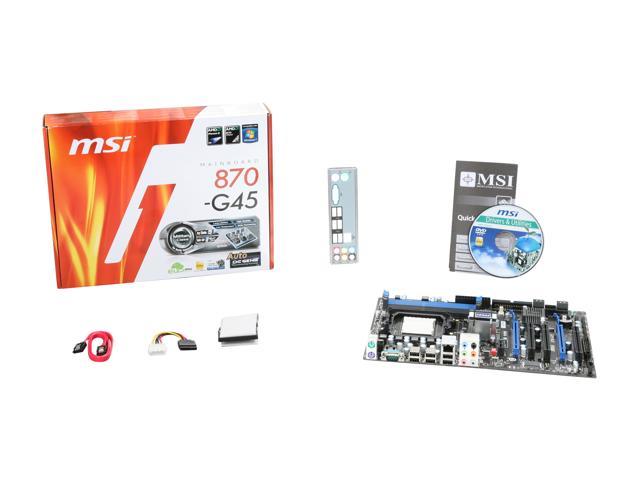 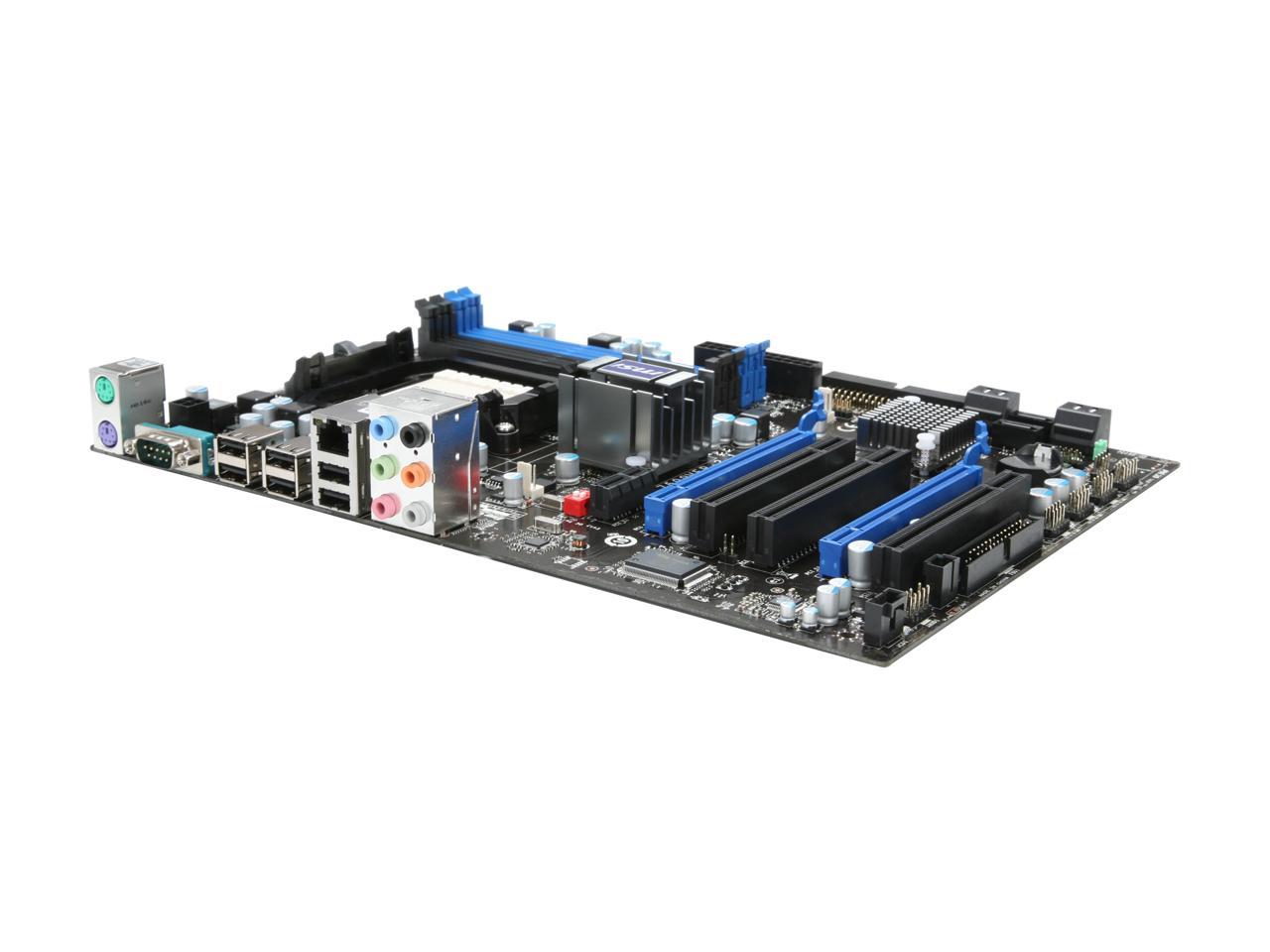 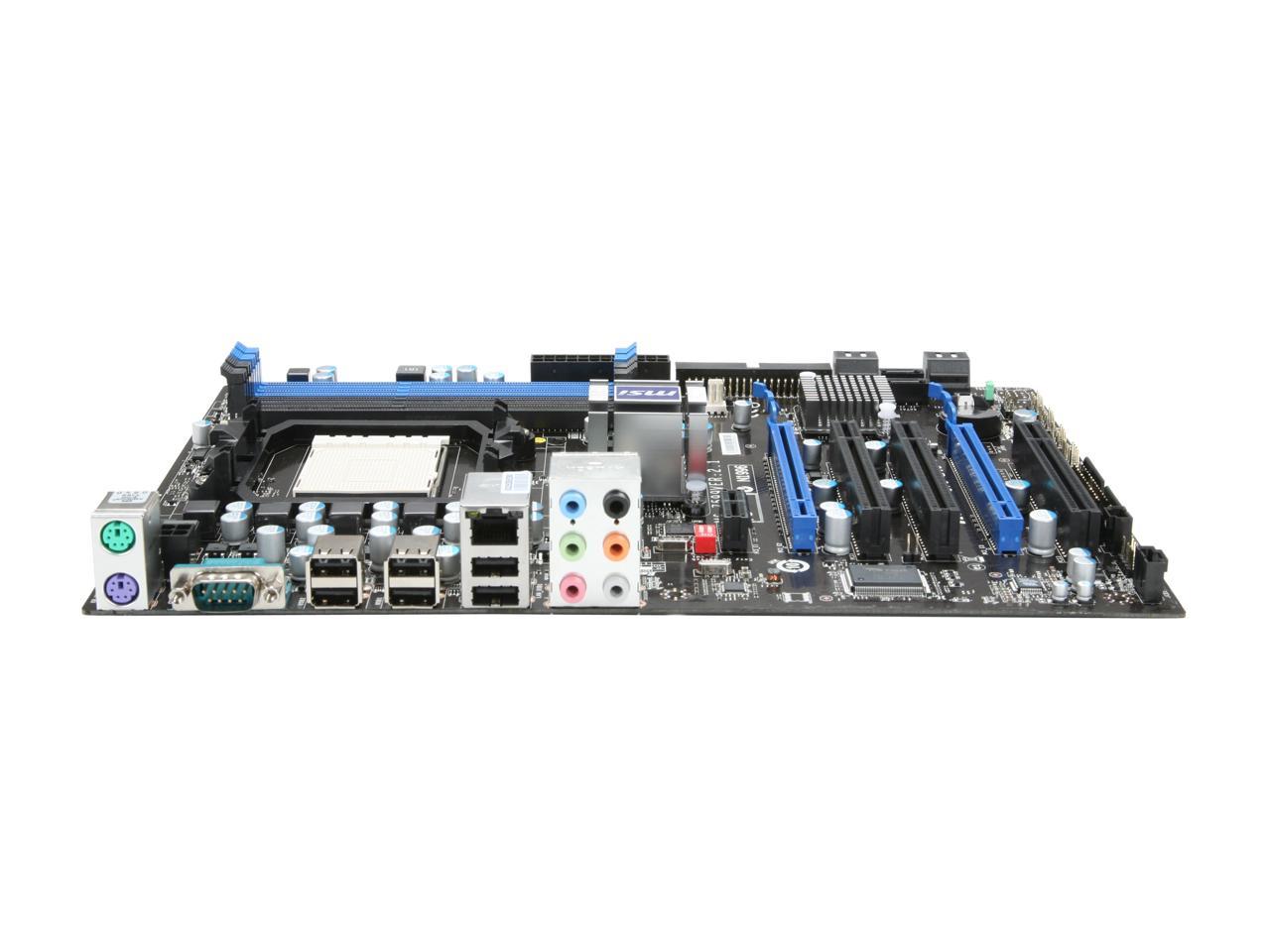 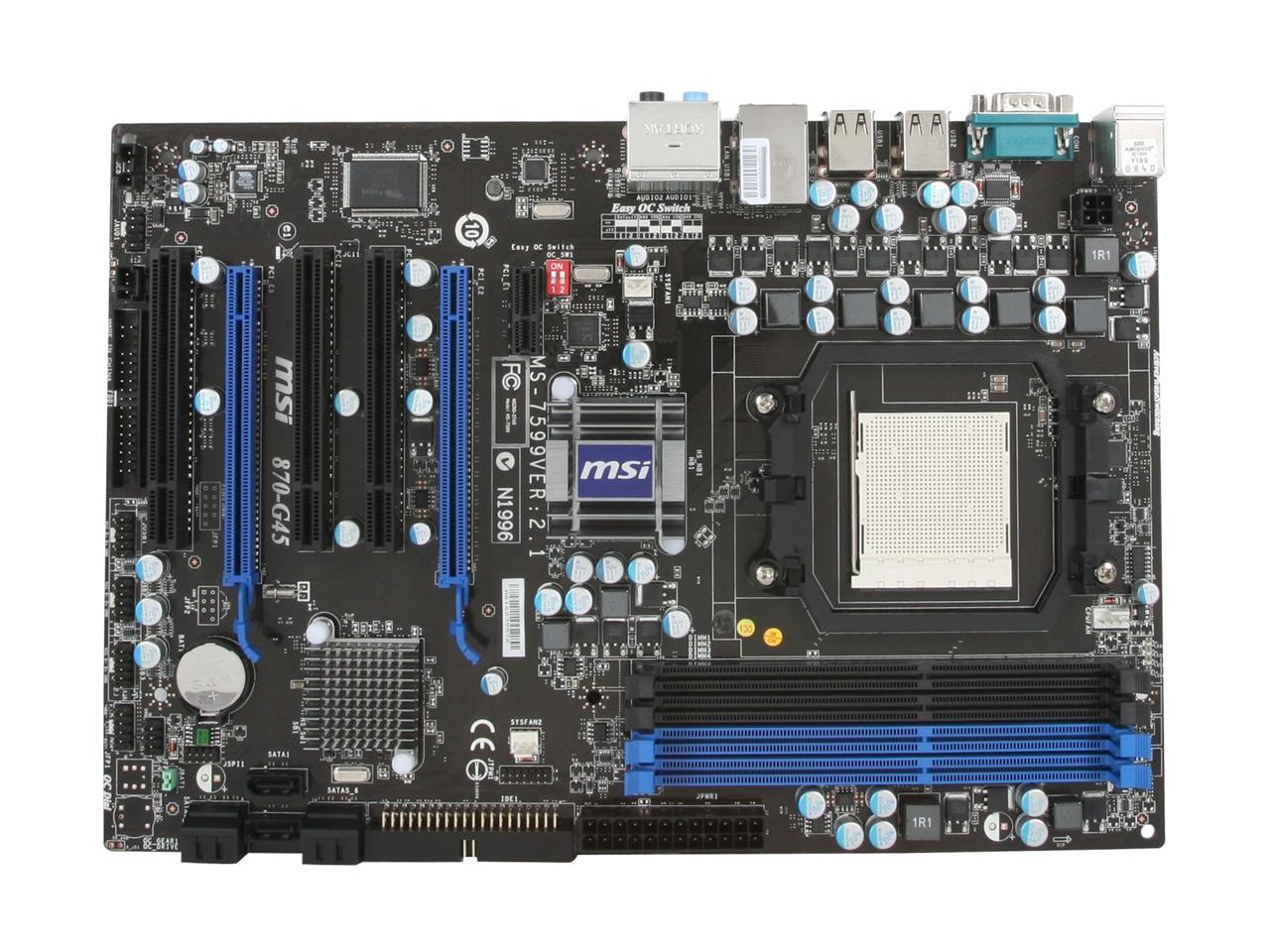 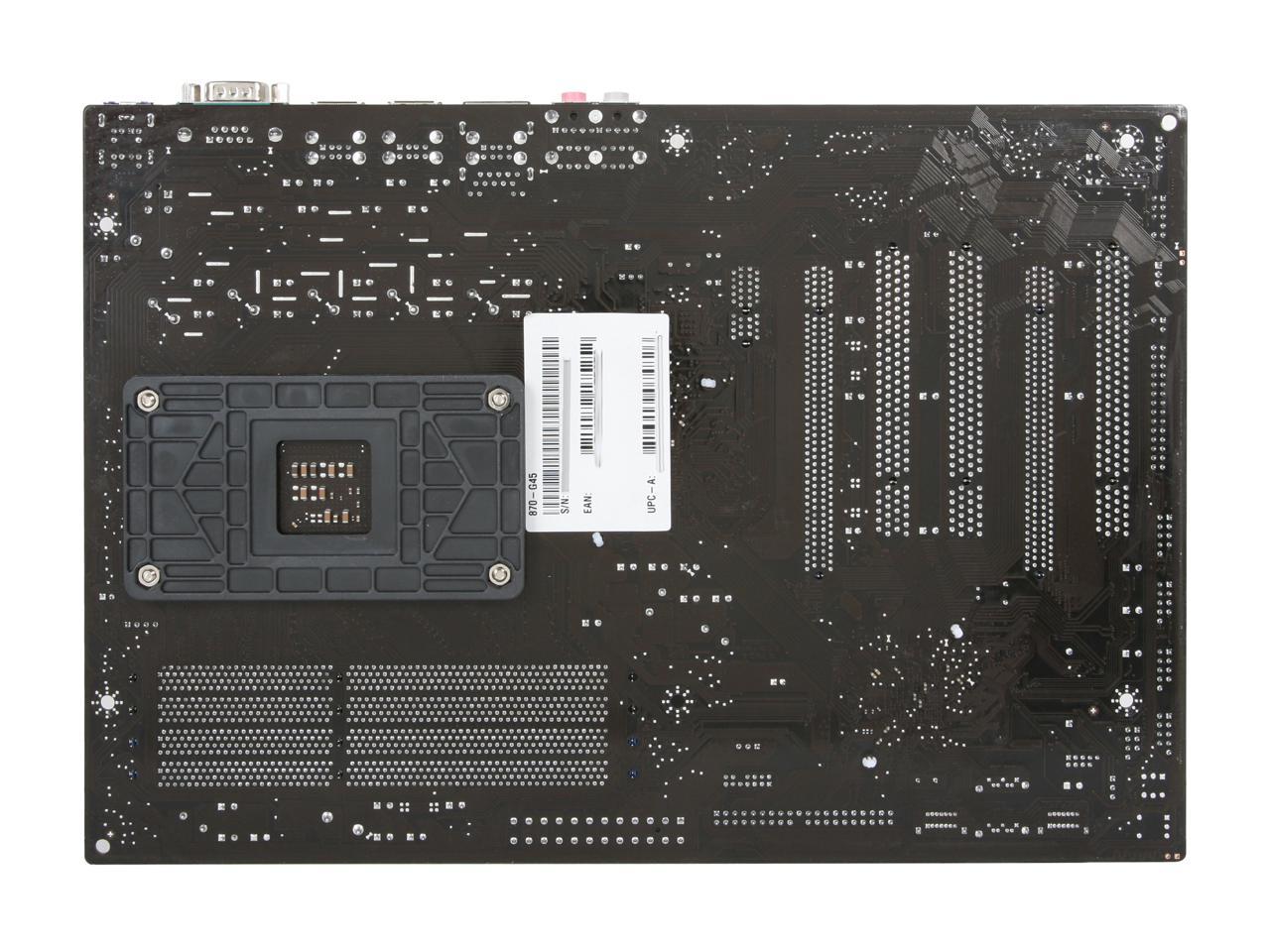 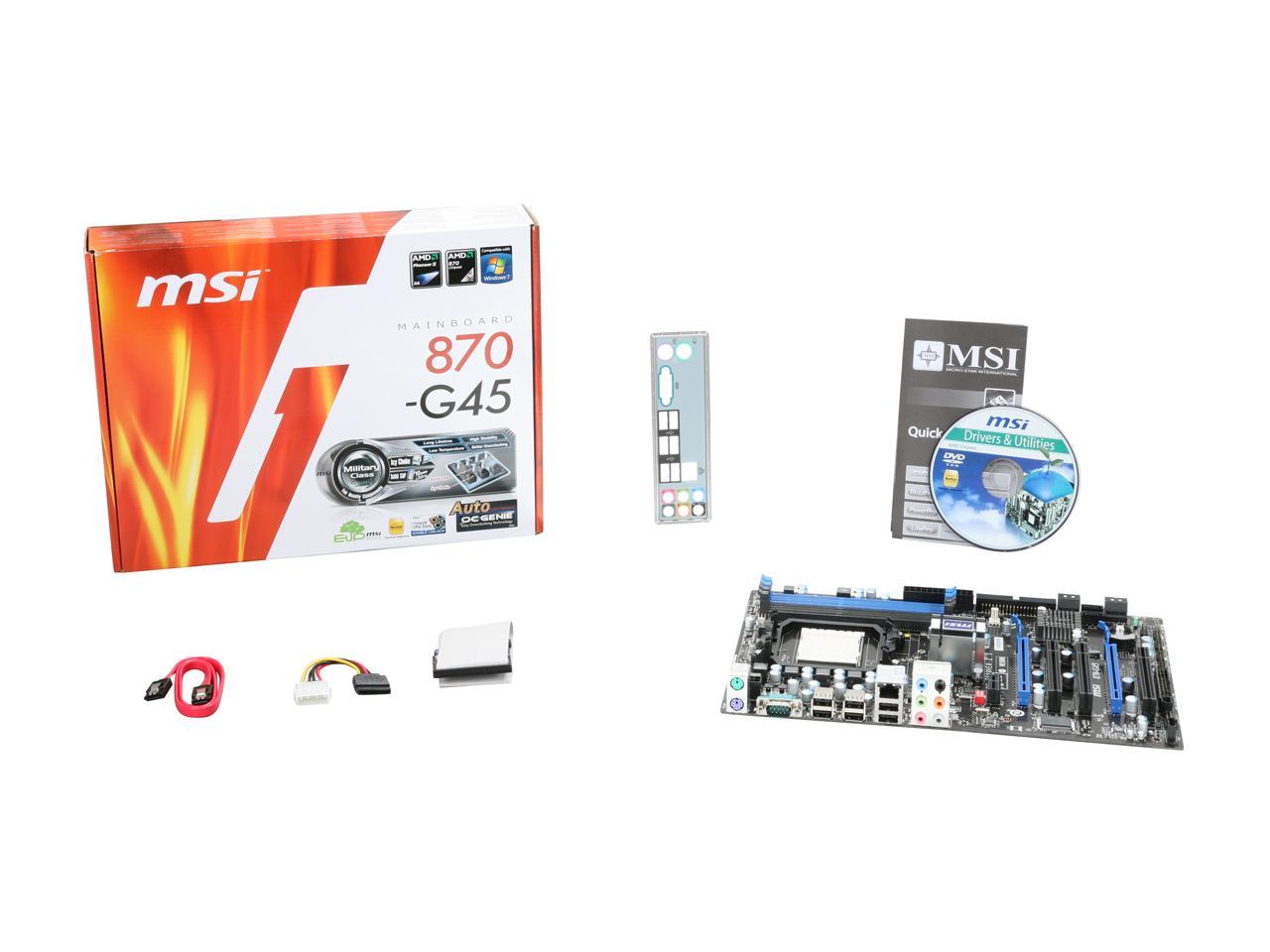 (309) Write a Review
OUT OF STOCK.
Overview
Specs
Reviews
Get great computing performance with MSI's 870-G45 AMD motherboard. Based on AMD 770 chipset, this ATX form-factor board is designed to support the latest AM3 Phenom II including X6, Athlon II and Sempron 100 Series processors. With MSI’s OC Genie and Unlock CPU Core technology, you can easily dig the most potential out of your CPU for extra performance.
Dominate your applications and games with up to 16GB of DDR3 memory fitting into four 240-pin slots with dual channel support and overclock up to 2000MHz for increased performance. Get stunning 3D and video playback capabilities by plugging dedicated graphics card to the PCI Express 2.0 (one x16 and one x4) slots. Onboard lossless 24 bit/192kHz HD audio chipset offers top-level audio quality of extra high fidelity.
Six SATA 3Gb/s connectors give you the ability to store massive amounts of data locally with several RAID configurations possible for extra security and high-speed performance. Count on the reliability and stability offered by MSI's 870-G45.

Pros: *With my setup... none. Confident that it may be a good board with another CPU / GPU combo. Did boot up & install Windows 7 Ultimate 64-Bit with no problems at all. After I got into Windows is when the nightmare began.

Cons: *Random shutdowns & the dreaded "Hyper Transport sync flood error" message was not amusing. After a week of fighting I decided to go with the board I had originally spec'd to begin with. *Also, in the manual it states " Do not bend SATA cables @ a 90 degree angle as this may result in data loss or corruption." ???!!! Soooo, that was new to me and I've been building machines for years and never heard that. Personally I think its a bit of a foolish statement but I could be wrong.

Overall Review: Ok, so after googling my but off and trying everything I could think of under the sun with no success I had to give up. Not sure if this board can truely handle a 125w 1090T CPU & Radeon 5770 card together. I was noticing that anyone who had the above issue I did was running 5770's & MSI / Asus boards with 870 chipset. But mostly MSI & 5770s.

0 out of 1 people found this review helpful. Did you?
Manufacturer Response:
Dear Valued MSI Customer, We would like to apologize for the issue you have experienced with this particular mb. Please email me directly via usersupport2@msicomputer.com your mb's serial number and your complete contact information, subject heading "EAH870-G45". I would like to help you get this resolved. Best Regards, User Support MSI Product Support
Brian G.
Ownership: 1 week to 1 month
Verified Owner
Pretty Darn Cool.4/13/2011 12:46:30 PM

Pros: I like the features, from the plethora of BIOS options, to onboard features, like CrossFire. I use this board with an AMD Phenom II x4 955 3.2 Black Edition CPU and it runs like a champ. The "Cool'n Quiet" feature helps me reduce power consumption by dropping the CPU to only 800 MHz when more power isn't necessary. Windows 7 found all of the hardware without any catches. The Audio package includes a customizable EQ for all output, so my internet browser and media players all sound the good. It's awesome for the price, and simple to use. It supports a world of expandibility and functions like a champ. I recommend this board to anyone and everyone who has a low budget and seeks performance.

Cons: NewEgg couldn't email the board to me. They made me wait three days for expedited shipping. USB 3.0 would have been nice to have, but who the heck needs that?

Overall Review: The software CD features a Linux Based -no OS necessary- OS for quick access to the internet. This version of Linux isn't very cool, but pretty handy if Windows crashes and you need a quick online fix. The drivers and software for Windows offers some pretty cool goodies to play around with. If you're loading Win 7 (x86-64), you won't have to fiddle around with Windows Update for drivers to make your hardware work. The HD 8 Channel audio software offers cool customization of audio playback, up to 192k sample rate and 24-bit audio, similar to other advanced sound cards. If you RAID, RAID-ing is simple. Multiple booting options that aren't common with OEM PC's. Me Likey.

Cons: As others have mentioned, this board has the 770 chipset, not 870 as it leads one to believe by the model number. My XMS3 DDR3 and this board have issues (timing/speed), but that might be my fault. Two eggs are lost due to the current Version 5 (A05) having major stability issues that brought blue screens during routine tasks (ripping, encoding, browsing...no gaming). It drove me insane, as at first it didn't seem repeatable. Months later, I now know this was 100% a BIOS issue, because rolling back to BIOS Version 3 (A03) completely resolved everything, in turn saving me and Newegg a RMA. 'Only kwirk after the rollback worth mentioning is that AMD Quiet and Cool doesn't work if you overclock. OC'ers beware. If you are having this frequent crashing problem with this board, go to youtube, search '870-g45 bios,' watch video, follow path as he says, download files, flash BIOS, restart and ENJOY. Against better judgement, I did the above and it fixed everything. Maybe I'll try V6?

4 out of 4 people found this review helpful. Did you?
Wayne J.
Ownership: 1 week to 1 month
Verified Owner
Rock solid board with amazing OC and unlocking capabilities7/12/2011 12:58:54 PM

Overall Review: This board has performed flawlessly. With a Phenom II X2 560, I first tried the "Easy OC Switch" (a pair of dip switches on the MB that will increase CPU performance by up to 20%) and the CPU speed went up to 3960MHz (from 3.3GHz). I then set the switches back to default and tried to unlock the two unused cores and lo and behold - I now have a Phenom II X4 CPU! Then, I figured I'd try the X4 with the Easy OC Switch turned on and it still works flawlessly. Amazing that I turned a Phenom II X2 3.3GHz into a Phenom II X4 3.96GHz with about five minutes of quick changes.

Cons: None so far; I expect to run into issues. This is my 2nd MSI board. The thing I don't like about MSI boards is their BIOS menu. But that's just preference. I've always found it cumbersome to interpret MSI's version of what others call something else in their BIOS. Simple stuff, but no big deal. Still, the bottom-line is, even if this thing has some minor issue that comes up, it would have been worth it at the price, so long as it does not completely become dysfunctional. All of the above pros (and other features I have not listed), the ability to unlock the Phenom II X2 555 BE into 4 cores, and it's price make it a GOOD BUY for me.

Overall Review: Since I had a hard time confirming which boards could unlock, I was very wary of which boards to buy. After much research, I even took a chance when buying this board. I am confirming that this board does indeed unlock. For those that say that it doesn't, there's a reason why. Not all Phenom II X2 555 BE's can be unlocked. Some can only unlock 3 cores, so if you can't unlock 4, try 3. Also, even if you can unlock, there's a chance it might be stable, and that's not even taking into account overclocking. So if you can unlock all 4 cores, and OC to a stable frequency, then consider yourself lucky. The bottom-line is, don't expect to be able to unlock and have stable OC 100% of the time. Even in other places on the internet where people say certain boards are capable of unlocking, the CPUs themselves may not be capable. This is a cumulation of my research over the last few weeks. Hopefully, I saved someone some time.

Cons: NOT AVAILABLE ANYMORE!!! I planned on building more budget PC's for some family members using this mobo. Guess I better look somewhere else.

Overall Review: The blinking link can be annoying if you have a see thru case. My suggestion...put more lights in it!!!

Pros: The size is very good. Full atx but more narrow than you would expect. This allows use in the newer more cramped Towers with less interferance from your DVD and HDDrives and more room to route cables. The bios is full featured. It has every tweek you could ever want and total control over the CPU. Unlock and manage each core as you wish. It has been a long time since I have used VIA Vynyl Audio Chip but was pleasantly surprised how well it worked. I went to VIA's site to download the drivers and interface for the VT1828S audio chip. Was able to get my rear speakers working which would not work with my last MB with nVidia chip sets and Realtek interface. ;-) Happy camper. The OC Genie works quite well and will still allow you make improvement in your RAM afterward if you have good RAM. Win 7 Ultimate 64 loaded all of the necessary drivers but I went to nVidia and VIA for the most current drivers. All solid caps. A lot to like for the money.

Cons: Not very many. The dip switch on the board for instant overclocking does not adjust voltages for anything and might not work for you unless you have made 5 to 10 percent voltage increases on CPU, NB, HT etc prior to moving switches. This is not a con just a heads up. (W7 is beginning to have as many updates and fixes as did W-XP. Just an observation.) The Egg's review software thought arctic silver 5's product code was a dirty word!

Overall Review: The size dimension of the board was a pleasant surprise. I have a tower that would mount a first grade chalkboard so I never worry about the size of the mainboard. When I dropped it in I was able to remove the rear MB mounts and run cables straight down the case without any detours and all of the drives looked as if they were in another zip code. The board system stays cool enough although I replaced the heat transfere tape on the NB with Arctic Silver 5 before installing the board (don't do this if you have no eperience doing it before) and even with OCs stays in the low 30's so don't worry about the little heat sink being too small. MSI 870-G45 MB, Galaxy GT 440 Fermi DDR 5, AMD PH II X2 555 Calisto 3.2 AM3 BE W/all 4 cores open and working at 3.64 GH, Rosewill RG430-S12 APFC PS, 2X2GB Mushkin 996782 Blackline DDR3 1600 Ram @ DDR3-1712, SATA2-8M-3gb/s WD2500AAJS, LiteOn IHAS424-98R, Bytech BT-145 FD(yes I still use them), Arctic-Silver 5. All for about 400. Fast and Stable