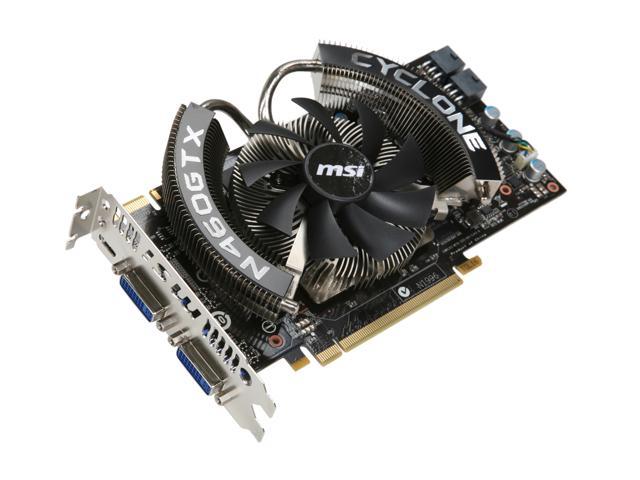 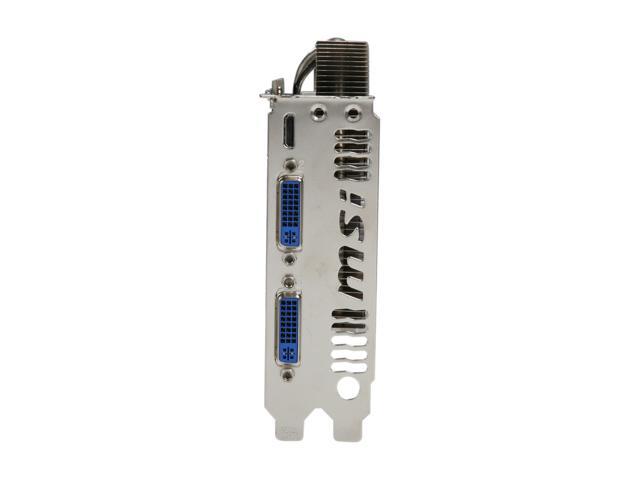 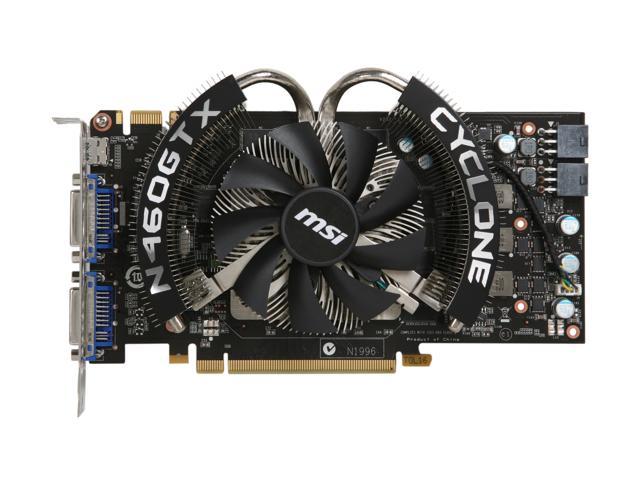 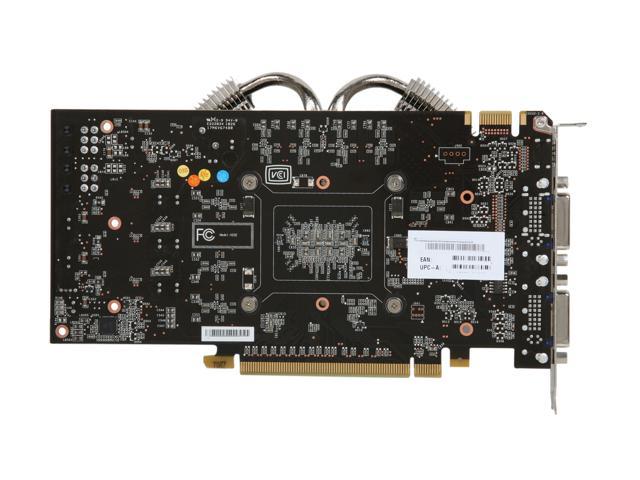 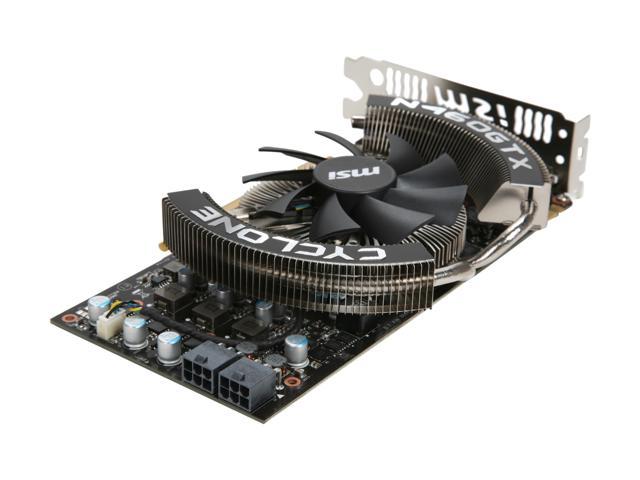 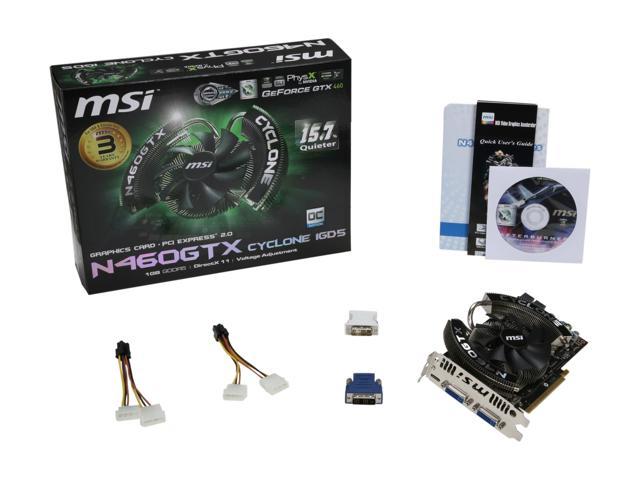 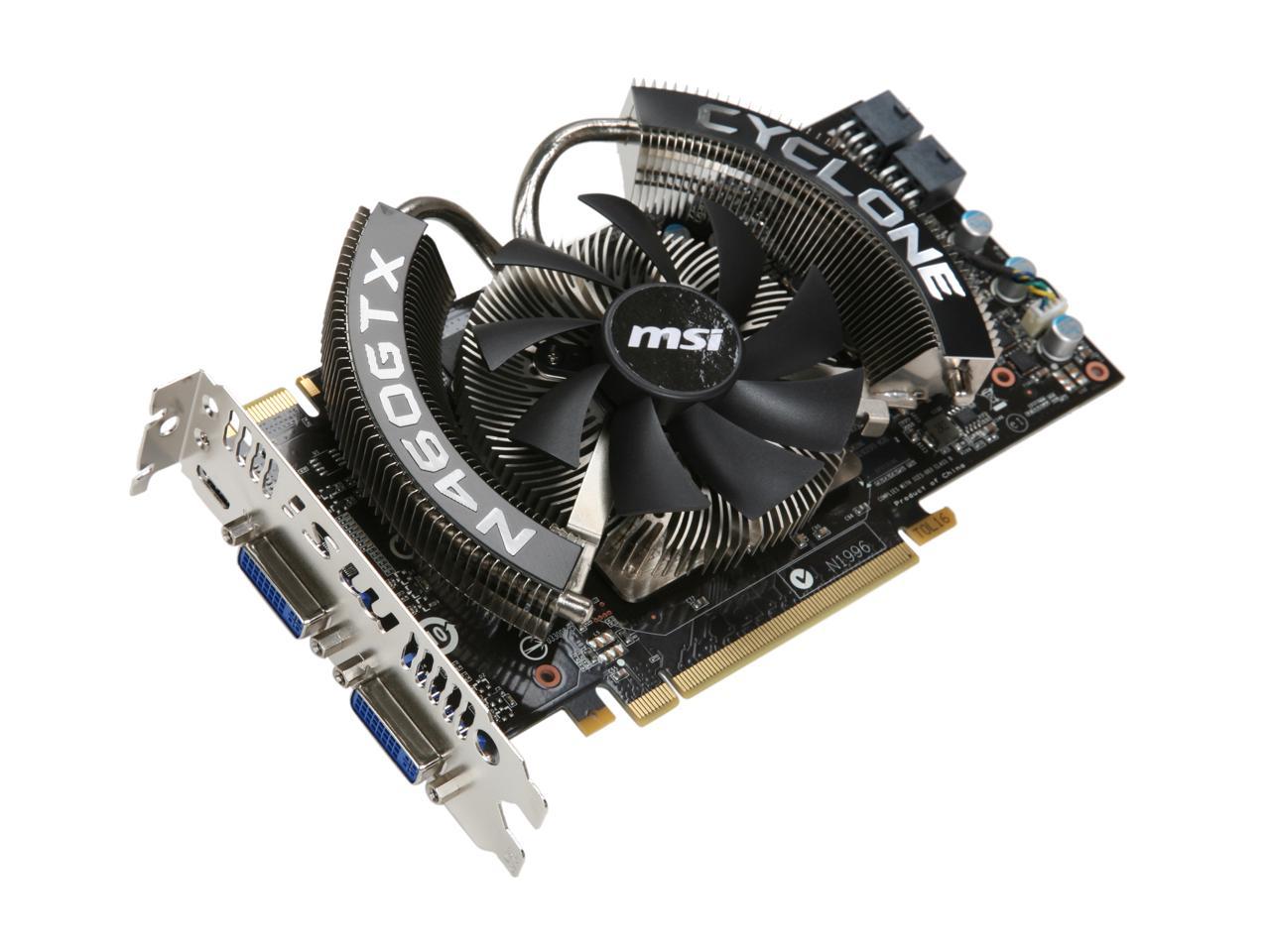 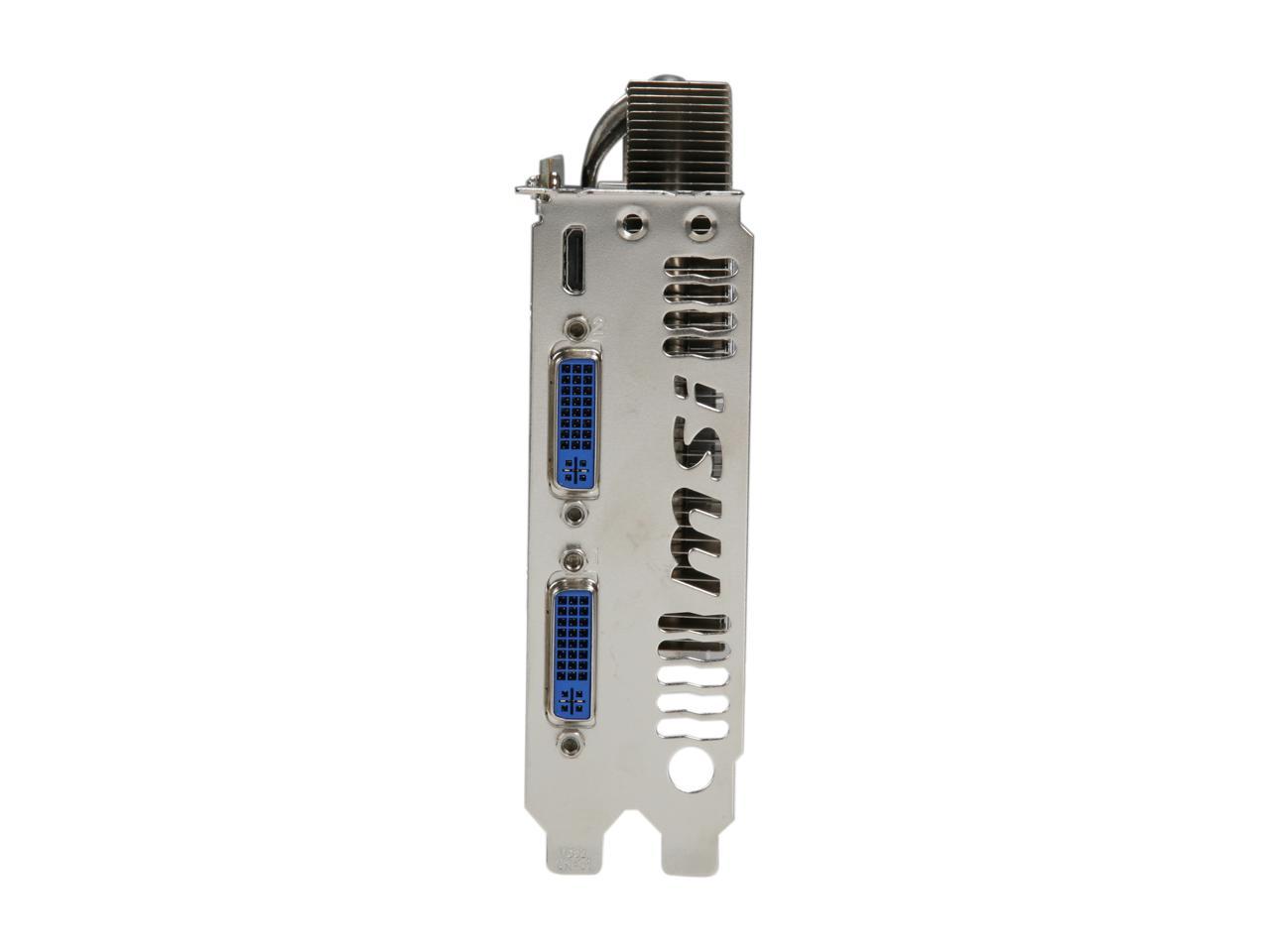 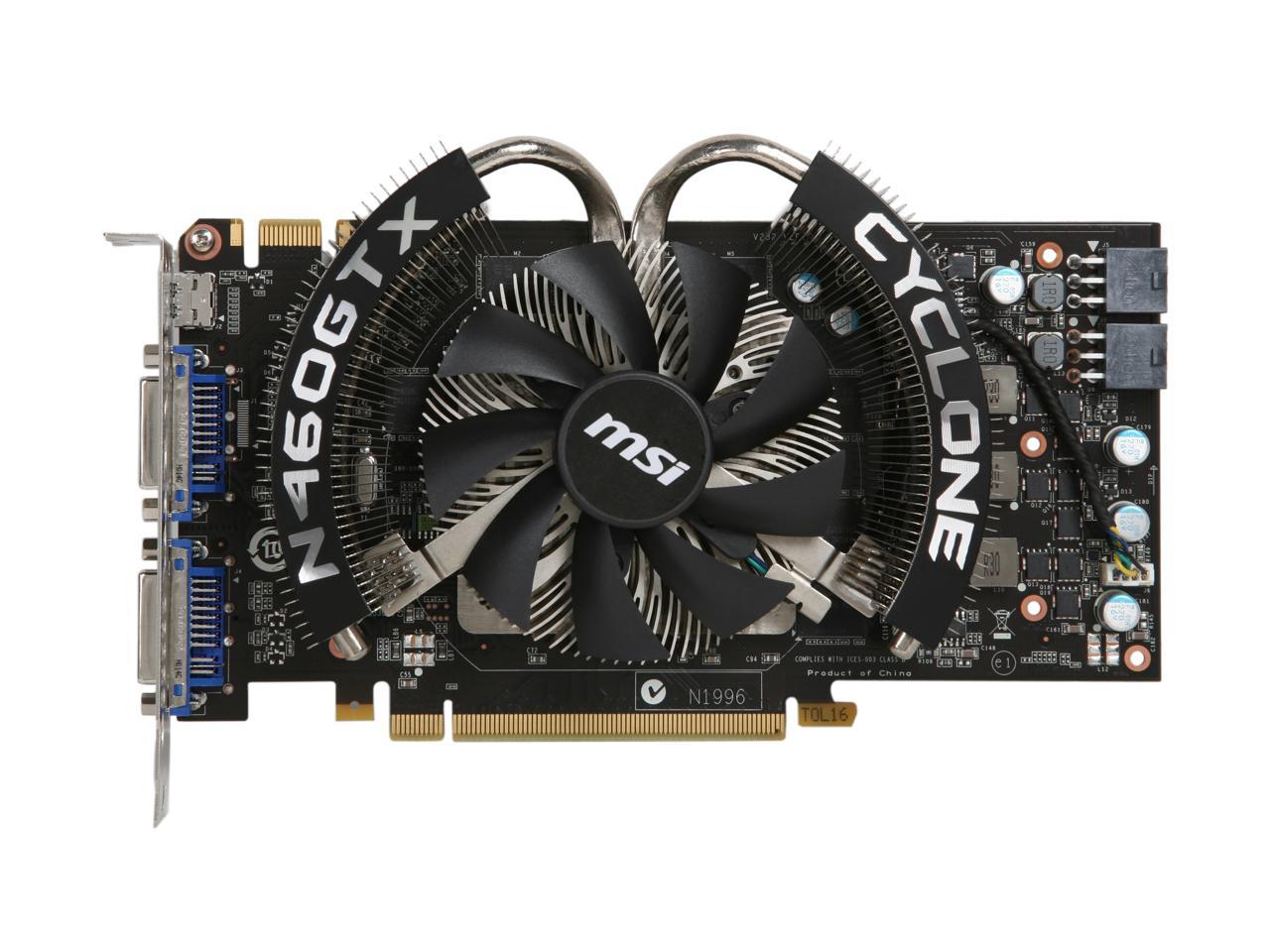 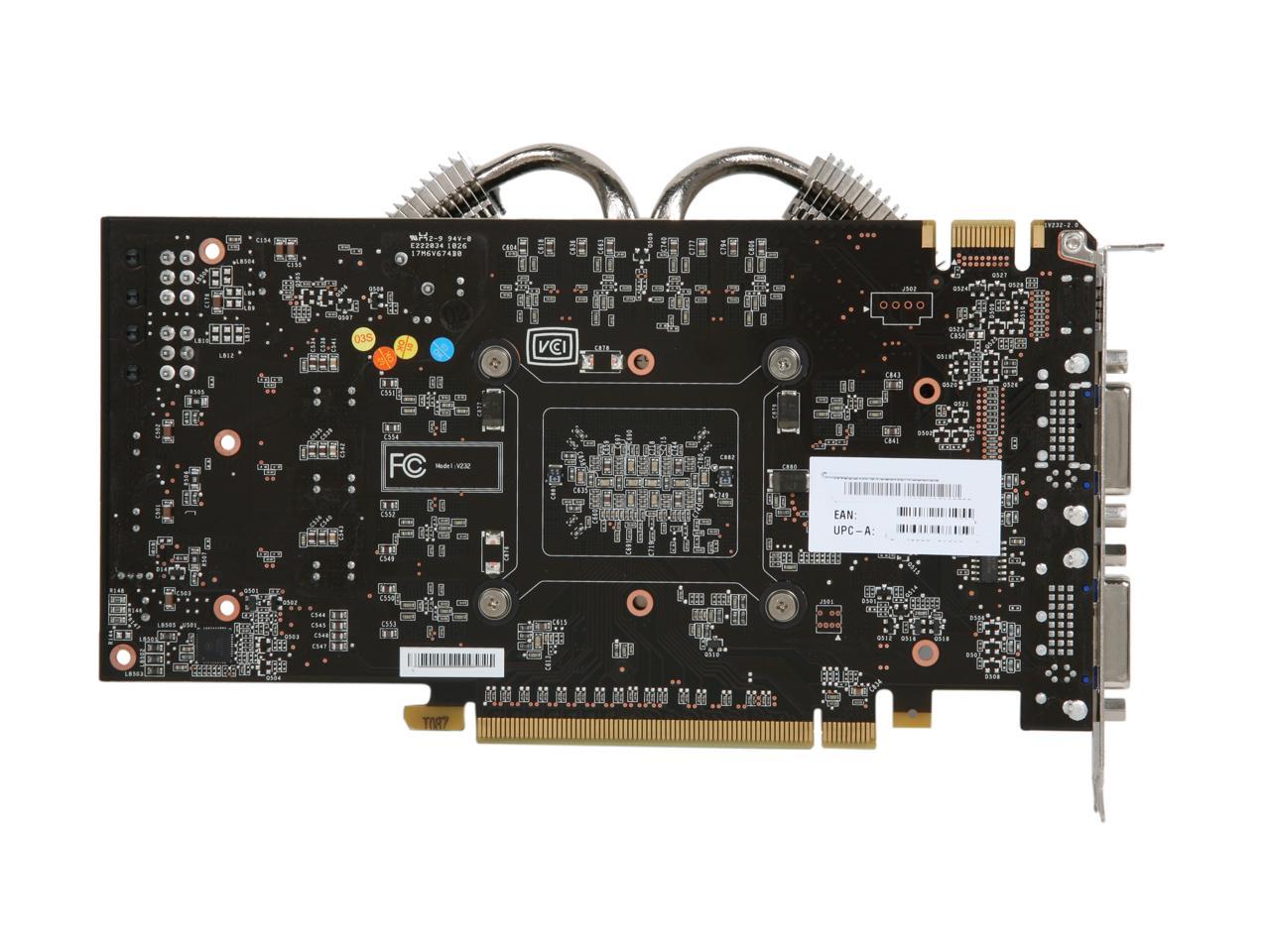 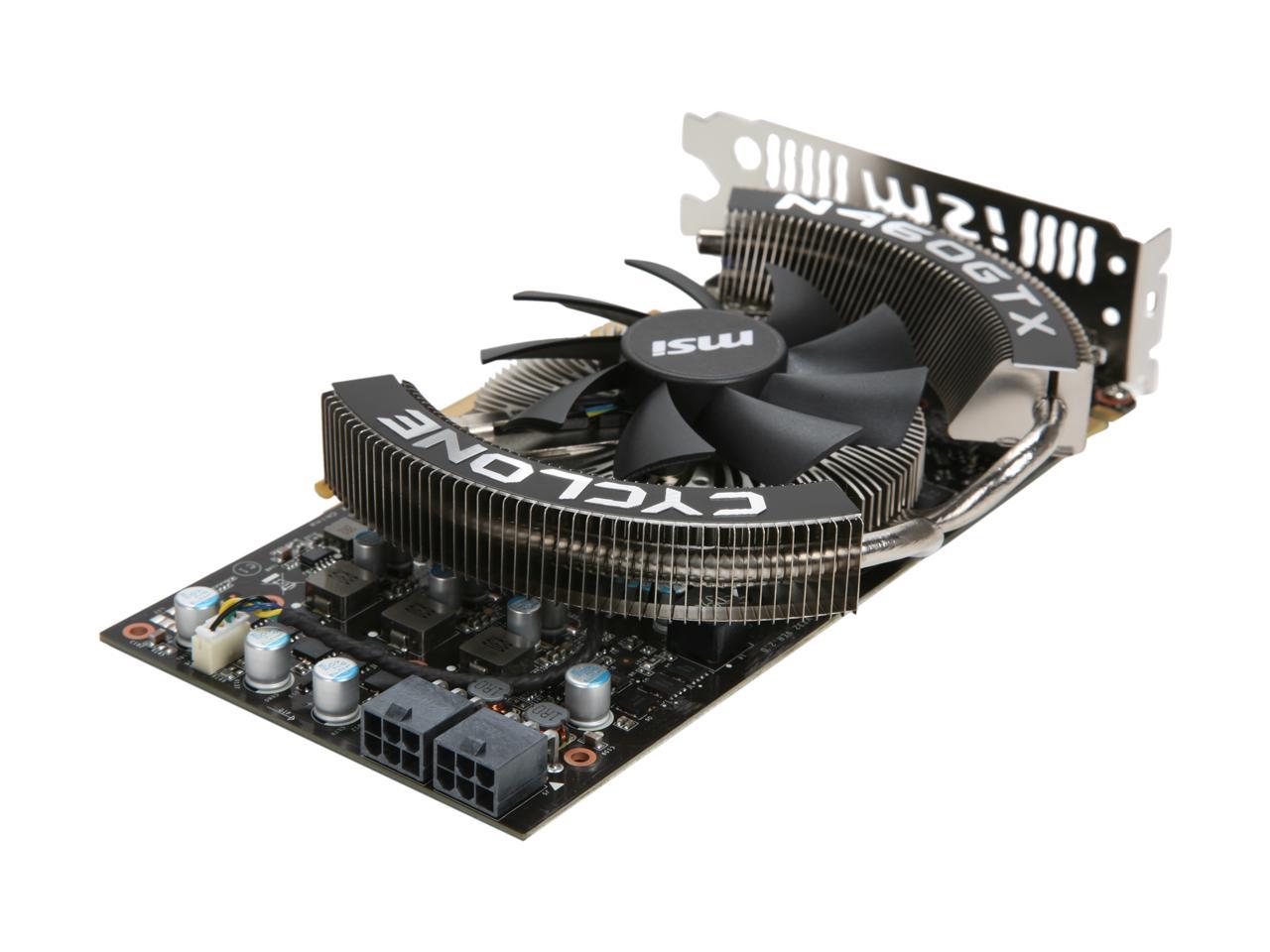 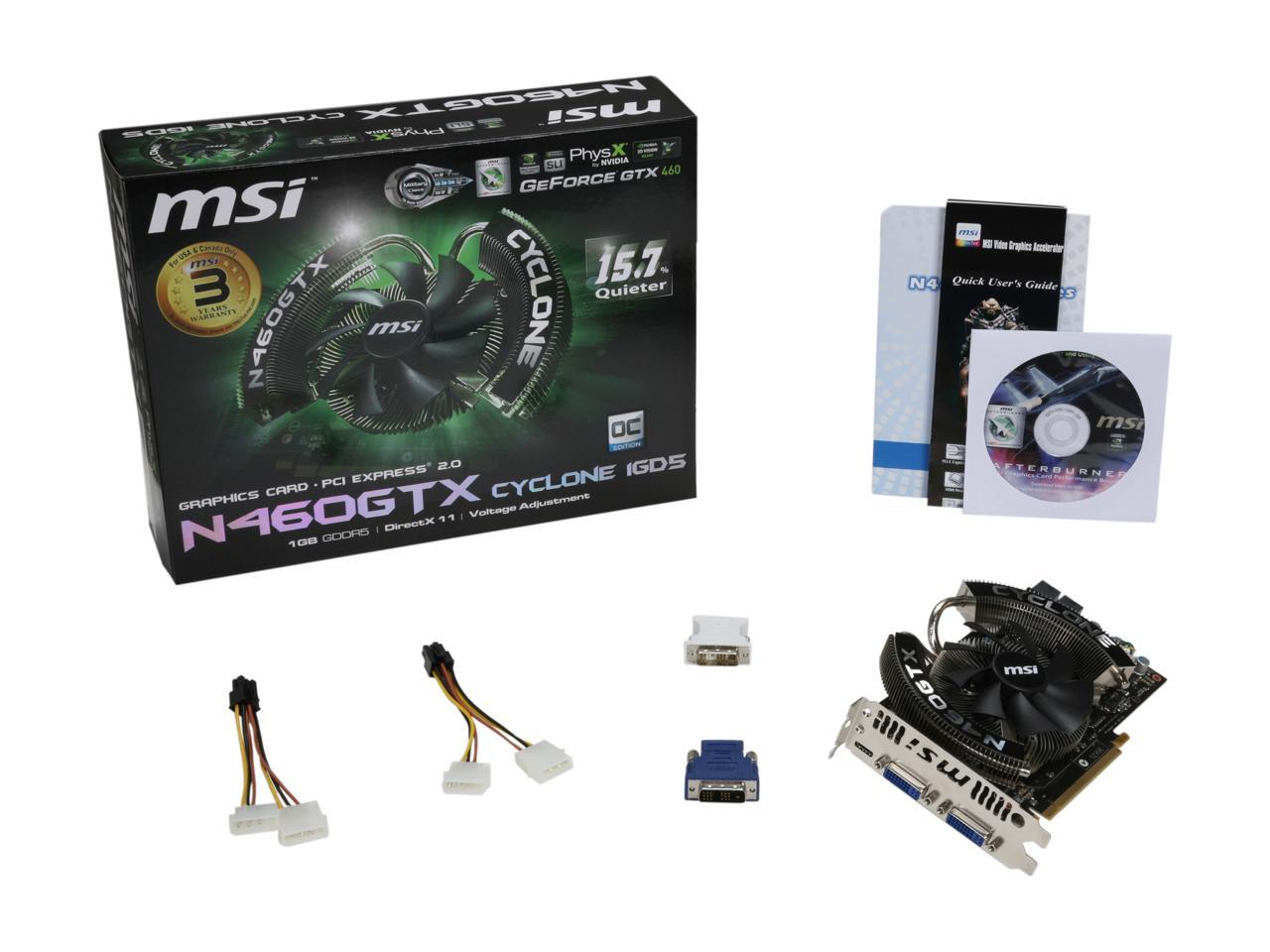 Pros: Still in use OC'd and running Folding@Home 24/7

Cons: Cooler could be stronger, but it is very reliable.

Pros: The MSI Cyclone is a fantastic product. It utilizes a reference PCB and the best revision of the Cyclone heatsink yet. -Very effective heatsink -Out-of-the-box software voltage control -High overclocking potential -Shorter PCB and lower TDP than the GTX465 while besting it at stock and overclocked settings (less heat and power consumption)

Cons: When run in SLI, you will need sufficient space between the cards or both will run warmly.

Pros: Replaced a MSI 8800GT with this card, and am extremely pleased with the performance on a Dell 30" monitor. As most of the reviews have stated, this card is easily overclocked, and currently its running at 875 core and 4200 memory at stock voltage. The highest temps posted on a stress test was 72C, but most of the time its around 68C. Applying more voltage did not significantly improve the OC, so for now its staying at stock voltage. What a difference there is between the 8800GT and this card. MS FSX flying is now smooth, even in the dense areas. All other games show a significant improvement as one would expect.

Cons: There is a bit of fan noise when the card is running at 70% on a hot day with the overclock, but its nothing annoying. However no noise can be heard when its running at stock speeds.

Overall Review: Almost got a 470 a week ago, but held off the purchase pending the reviews of the new 460 cards. It was a good decision, as this card exceeds my expectations. Runs cooler, uses less power, smaller size, and with the OC can keep up with the 470 on a lot of games. For the price, you can't go wrong.........get one.

Pros: Like several reviewers I upgraded from an 8800GT and of course the performance difference is huge. Sound levels are also down significantly compared to the 8800GT. Whereas the latter produced a high pitched continuous whine under load that could be heard throughout the floor, all I can hear from this card is the low whoosh of the fan if I'm close enough to the pc. Furthermore the whoosh is only audible due to the top blowhole on my P182 since the sound completely vanishes if I cover it up, so your experience may vary depending on your case. Highly satisfied with this purchase so far.

Overall Review: I couldn't find any mention of this in the product description but it comes with two PEG adapters and not one as seems to be implied on the MSI site. As you may have noticed from official reviews, the card requires two power connectors.

Pros: This is a update to a previous review. Great card, quiet, uses less power. No problems with this card other than breaking some fan blades which was my fault.

Overall Review: I used a core i3 fan to fix the broken fan blades. Seperate the hs from the fan, then saw off the clamps where the fan attaches to the motherboard flush with the fan. Then use the clips to attach to the gpu heat sink heat. Excellent hack fix, actually cools better now.

Cons: sometimes....my system is so dang quiet i forget the rig is on ><

Overall Review: I have a storm sniper case and thats overkill for the card size. I will upload some pics of the GPU usage on certain games so you realize just how much umph this card has.

Pros: I just upgraded from a 8800gt and although i was waiting for for the 5850 to come down in price im incredibly happy to have waited for this card. Its got incredibly low temperatures even when i OC'ed it further and its even quieter then my dvd drive. On load it doesnt even go over 60C and idle it sips power and stays cool. Reviews on some sites also showed the 768mb model in SLI overtaking the 5970 in some benchmarks so this is definately a price/perfomance bargain and i will be looking to SLI the 1gb version in the future. Get this card.

Overall Review: If you want to OC the card further make sure to download the latest Afterburner software to unlock the voltage and the new beta drivers increase fermi performace further on alot of titles.

Pros: Great card. The cooler does a great job at keeping temps low. It is very quiet but it does get louder as temps rise, like while gaming. Of course you won't be able to hear it while gaming so it is a non issue. You can create custom fan profiles to reduce the noise if it bothers you. With the fan set to 100% temps stay under 60c while running furmark. That is incredible for that program. While gaming temps stay in the 50's using the stock fan profile. They overclock very well. Most people are able to hit over 900mhz by upping the voltage. I've hit as high as 850mhz without rasing the voltage. I run them at 800mhz or just the stock 725mhz since I am using two of them in sli. I am only using a single 1080p monitor so stock speeds in sli are more than fast enough for every current game I play. In fact one card is more than fast enough for most games at 1080p.

Cons: If you plan on using these for a SLI setup I recommend you space them out. In a side by side setup the top card will run much hotter, @30c hotter, than the lower card. I have an Antec 902 which has excellent airflow. With 2 of these side by side on an EVGA X58 758 the top card was hitting 90c while running Furmark! With the second card installed in the lower slot the temps now stay at @60c for both cards while running furmark. I wanted to use the side by side slots because they are both 16x on the 758. The lower slot is 8x. Luckily a 16x/8x sli setup doesn't hurt performance at all. There might be better cooler designs available for a side by side setup. Of course any design will run cooler if you space the cards apart.

Overall Review: If you plan on using these for SLI I recommend spacing them apart. Temps are still safe with them side by side but the top card will run very warm. Space them out and they will both stay very cool. Of course your case needs to have good airflow since this cooler design does not exhaust outside of the case. Each card will draw @150-180 watts. For a single card setup you will need a @450 watt PS. For an SLI setup you will need @600 watts. Of course you need 2 pci e 6 pin connectors. The card comes with adapters for molex. You need 4 molex for 2 pci e 6 pin plugs.