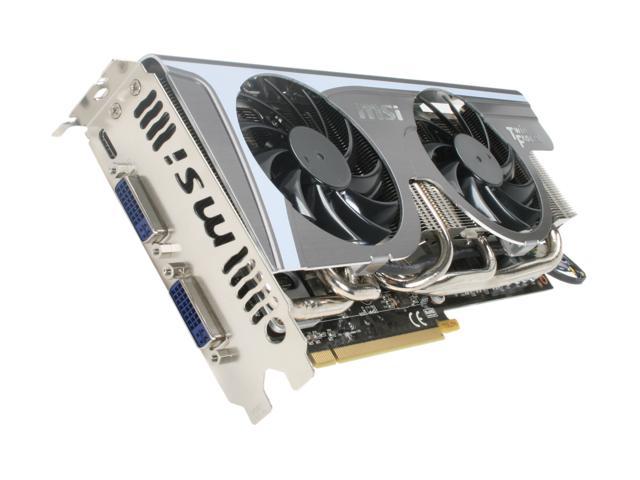 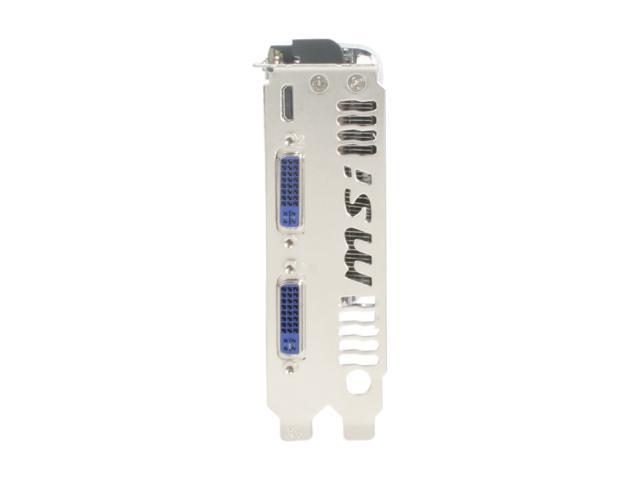 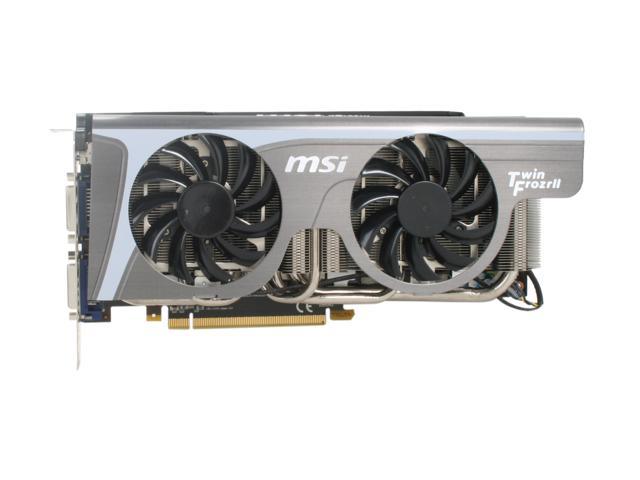 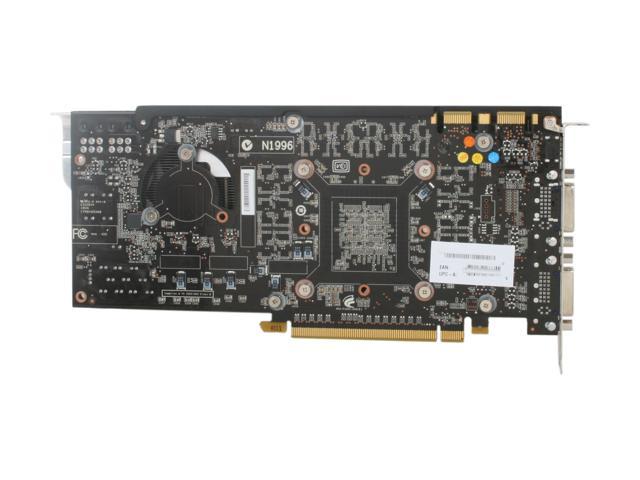 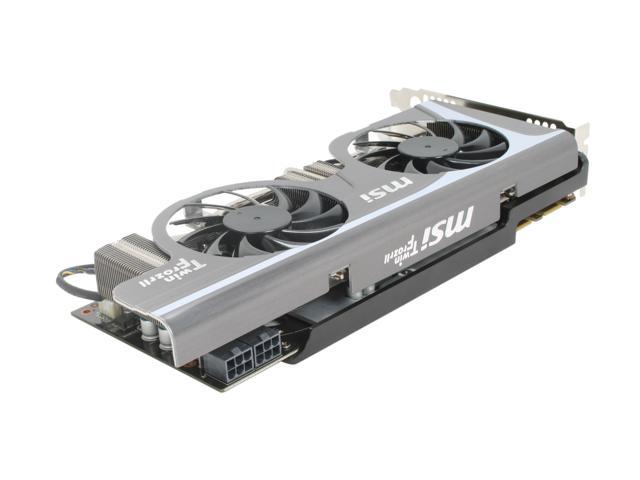 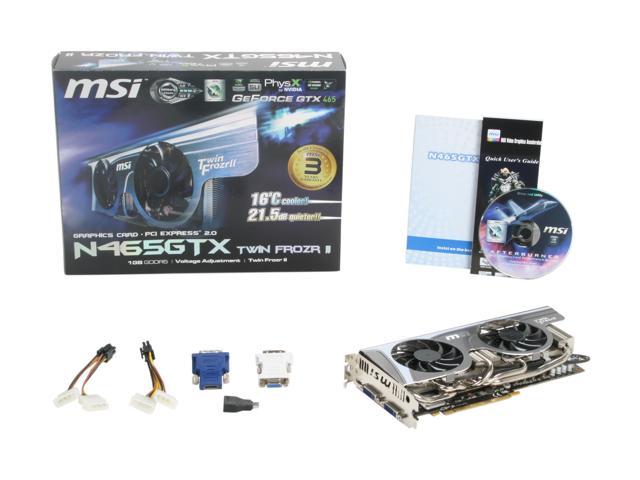 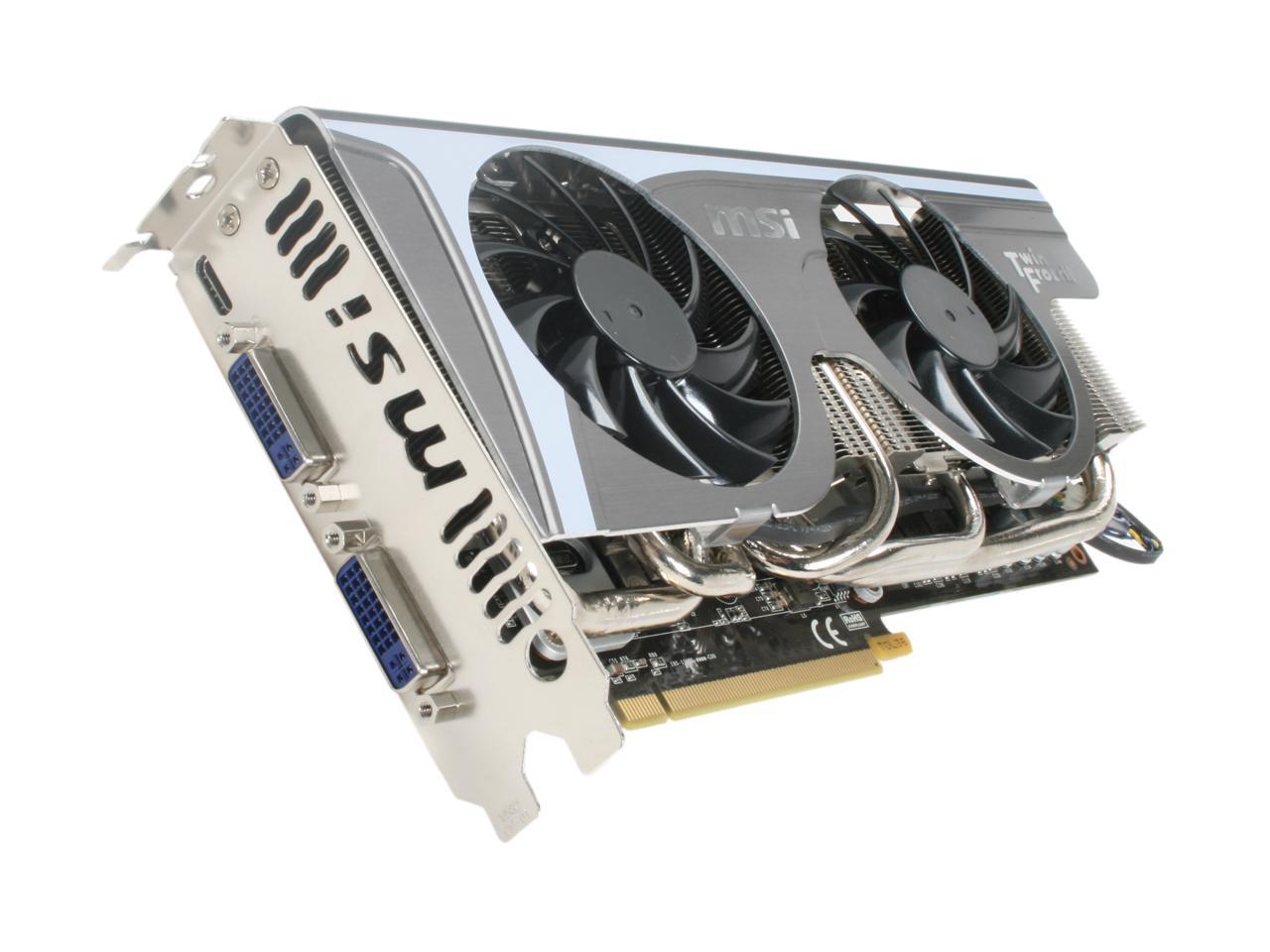 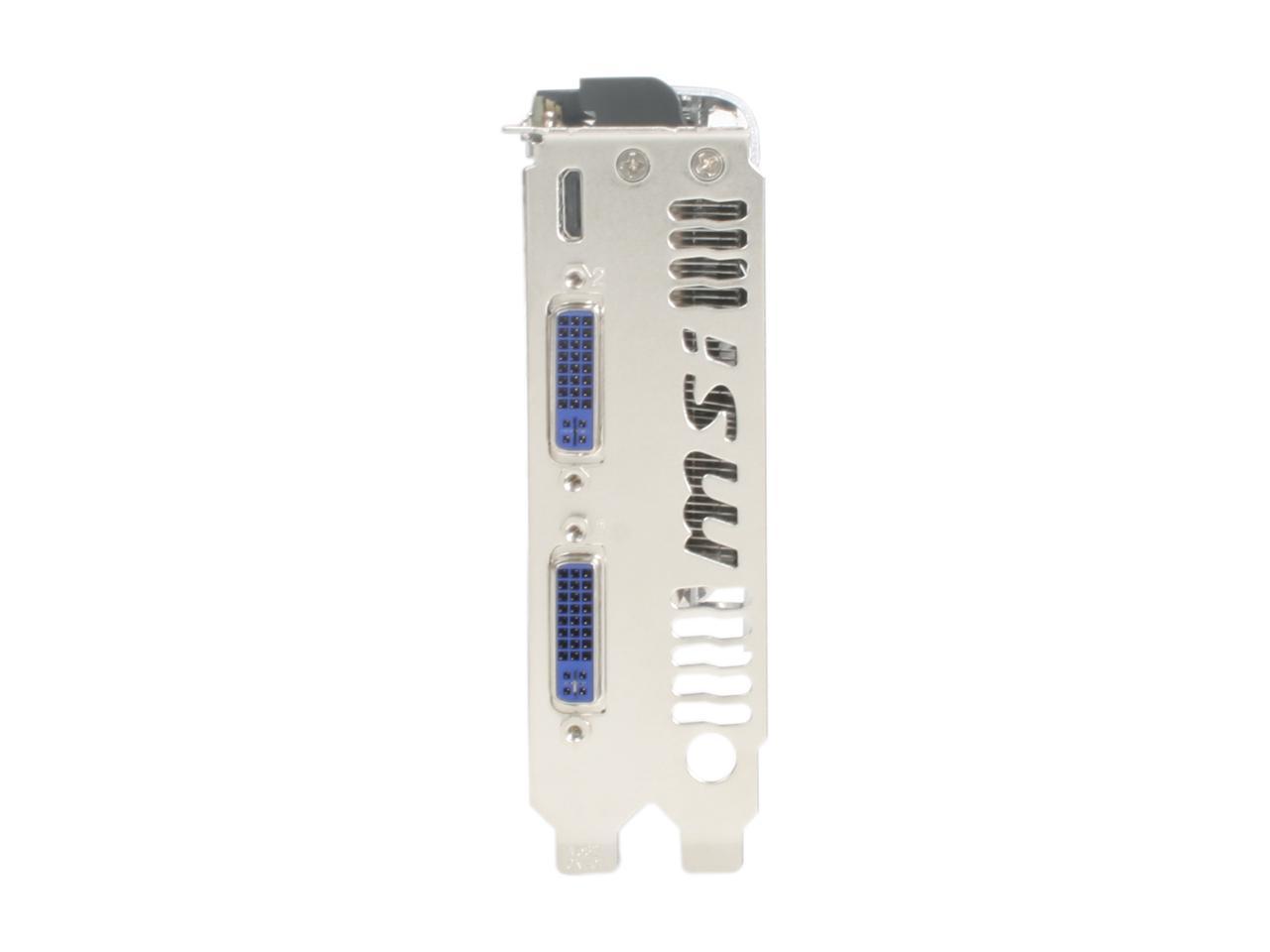 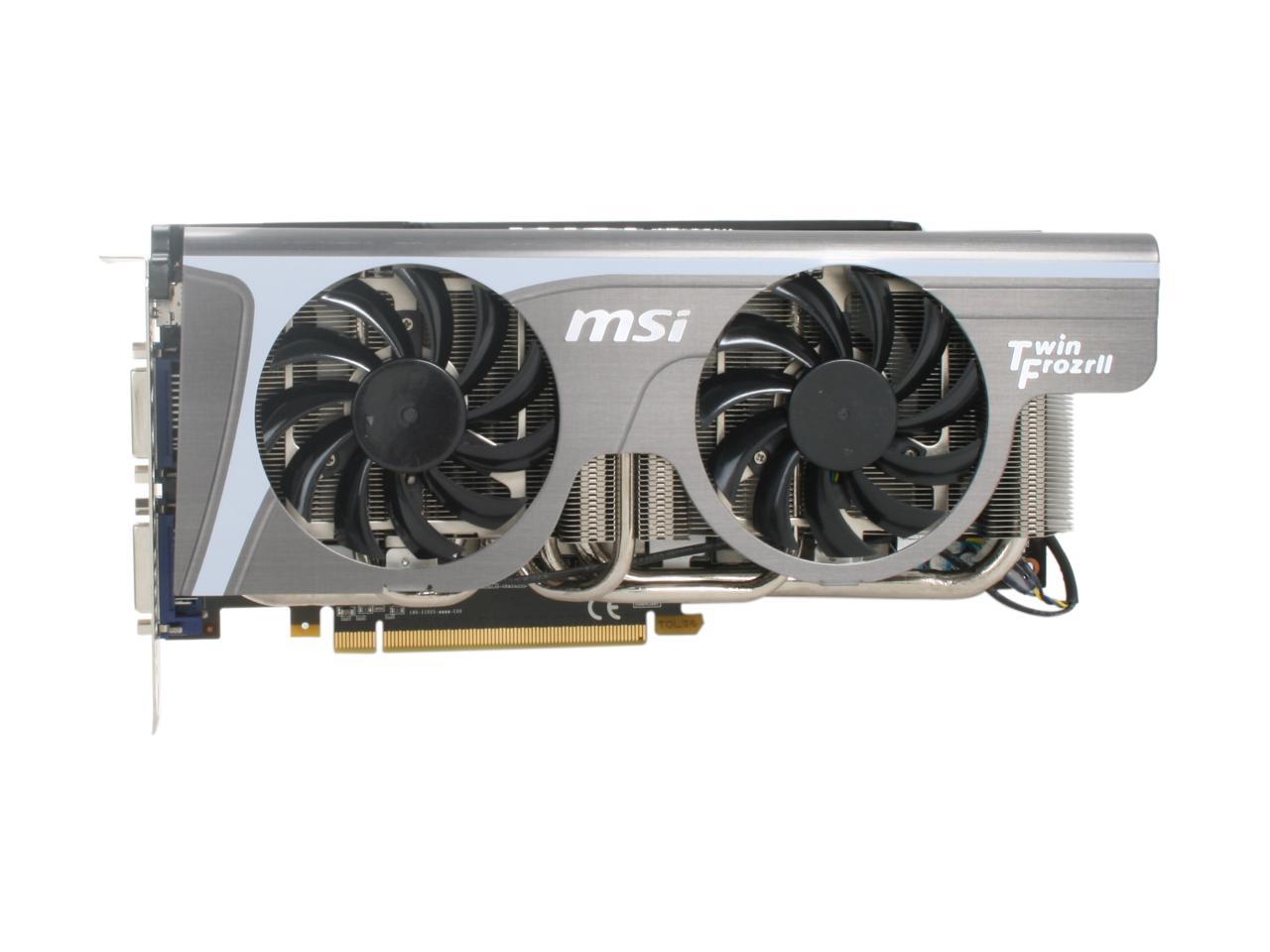 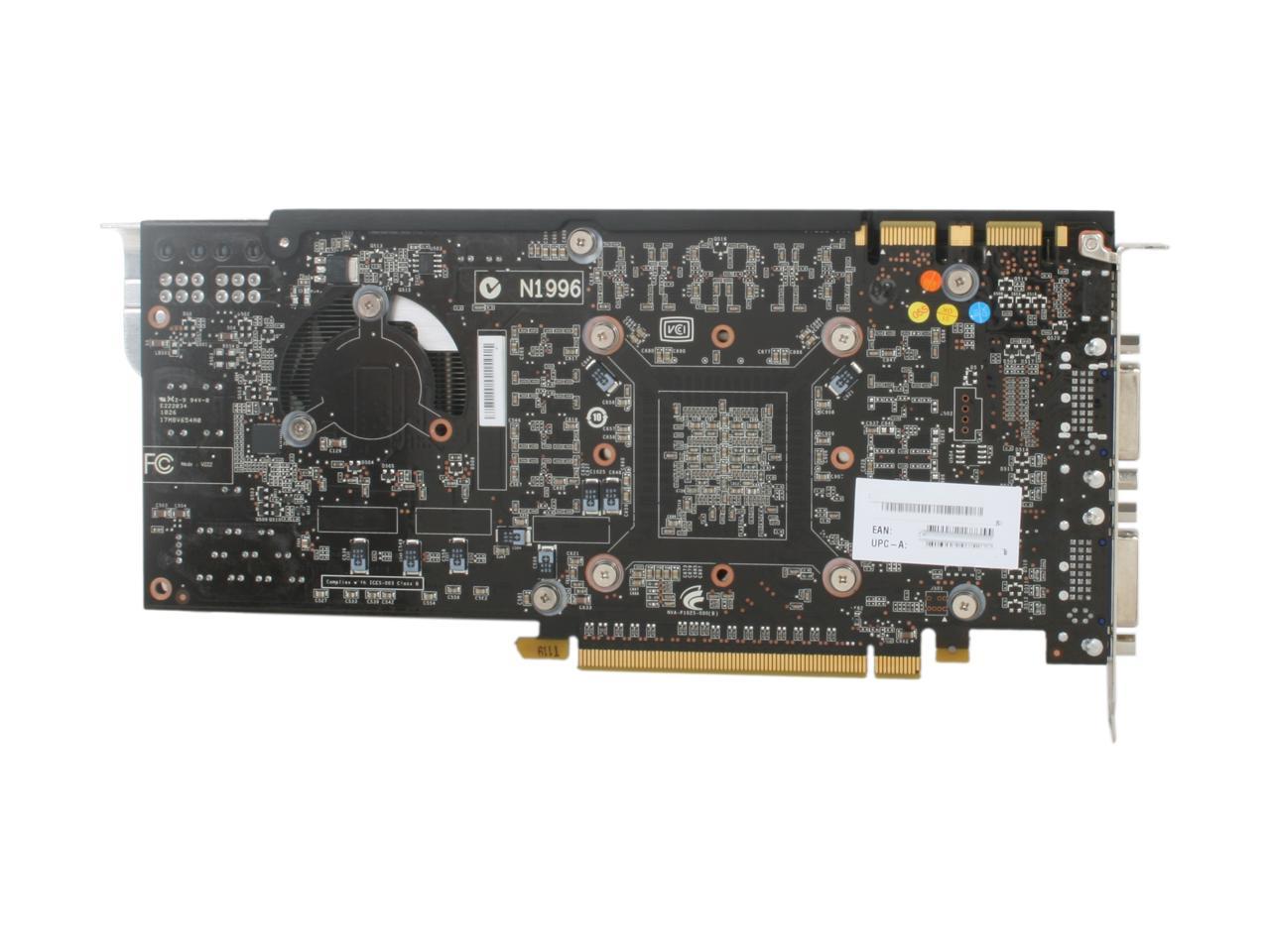 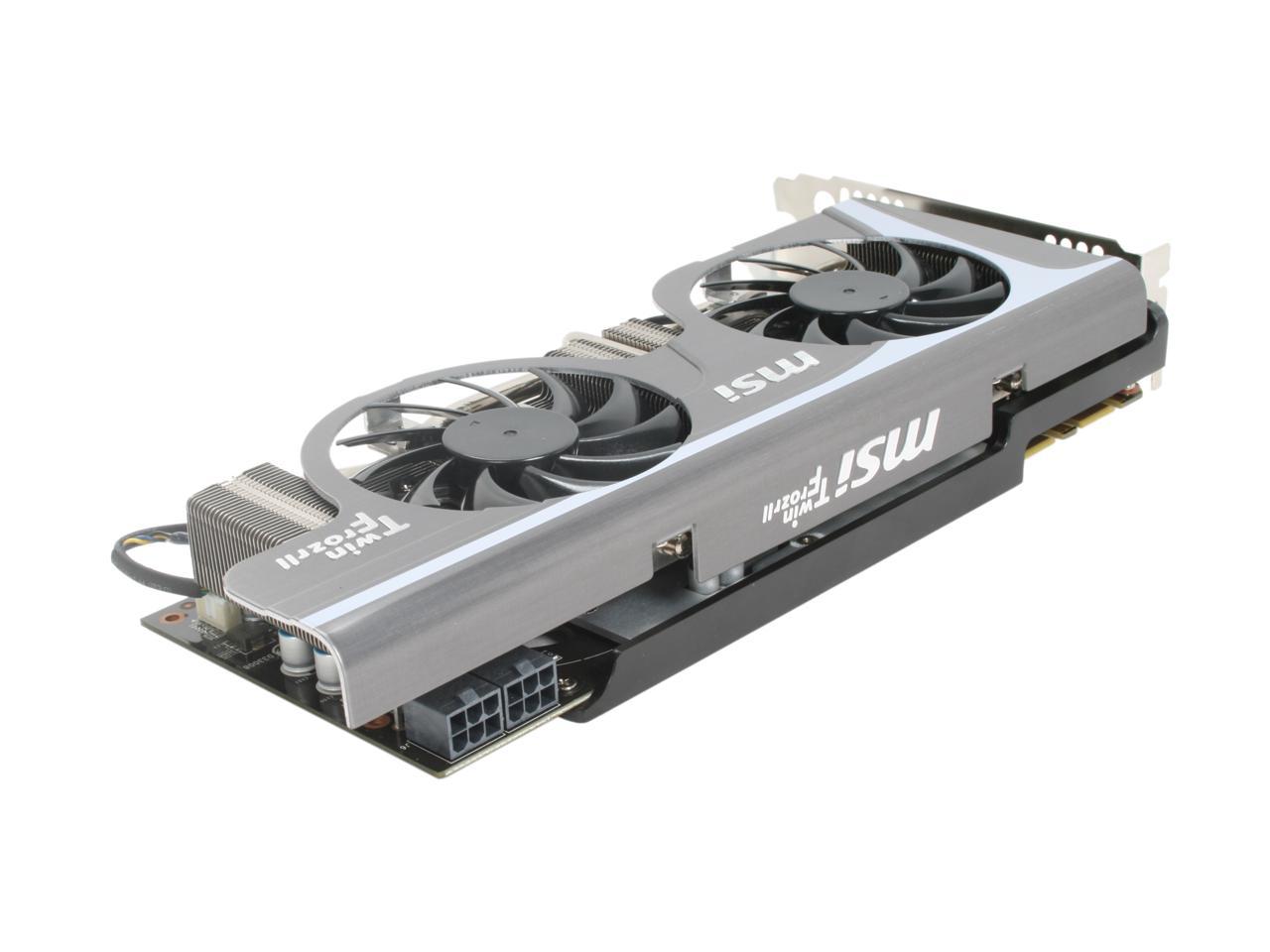 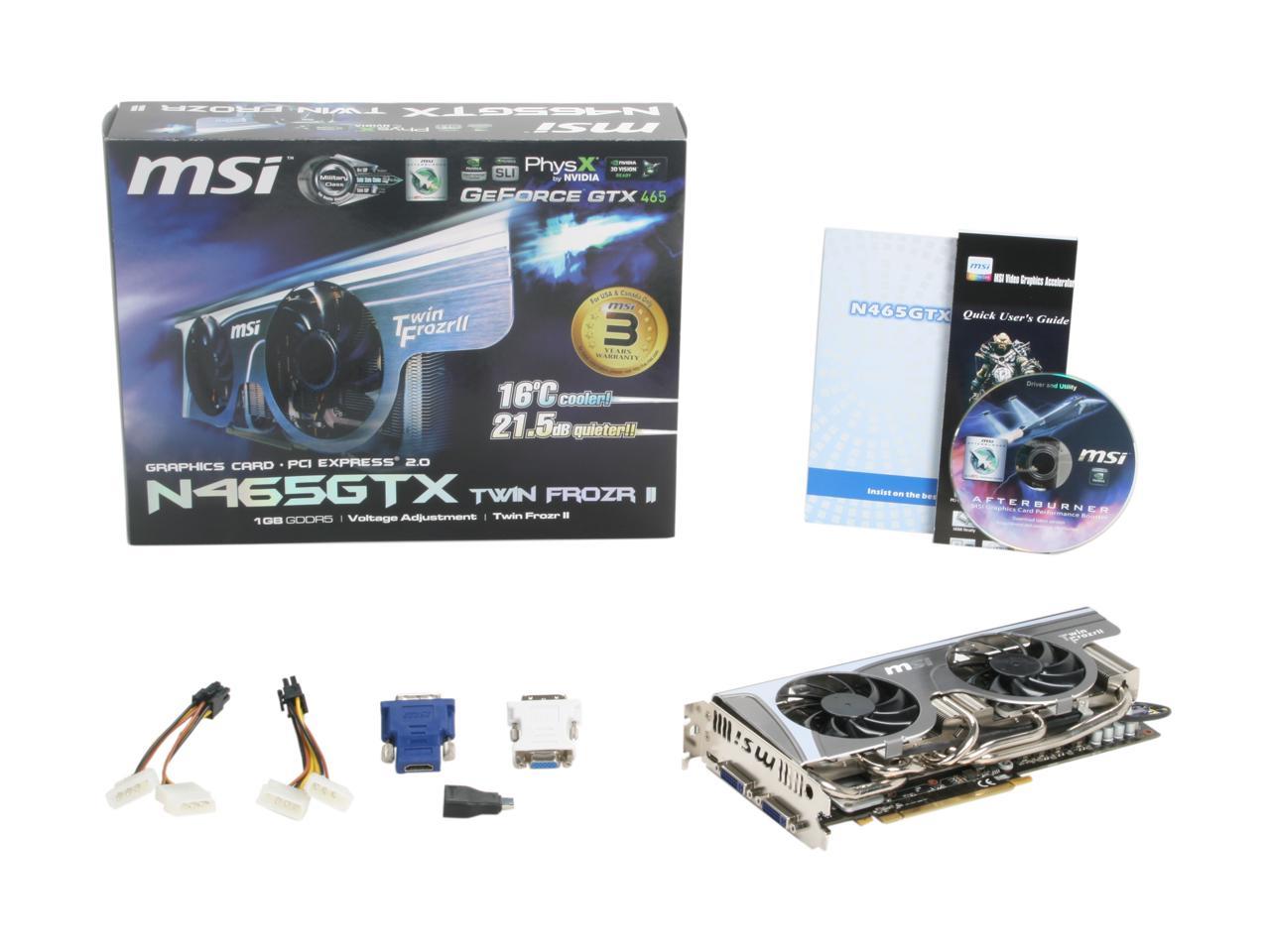 Pros: The twin frozr II may in fact be the best GPU heatsink/fan combo that there is. After a few days of fiddling, testing, and playing I have settled on these overclock speeds: 850mhz core (1700mhz shader) and 3720mhz memory. That is an increase of 40% on the core and 16.25% on the memory - absolutely insane! And my benchmarks show it - this card at those speeds sits right between a gtx470 and gtx480 in performance. The GPU idles between 34-37 degrees celsius @ 45% fan speed, and tops out at 73-74 degrees in furmark @ 60% fan speed. Fan noise is either nonexistent or a non-issue. At 45% or less the dual fans are inaudible, and anything less than 65% fan speeds is not noticeable while gaming with any appreciable amount of volume coming from your speakers. In other words, if you can clearly hear the music and sound effects from the game you're playing, you will not hear this card.

Cons: Power draw is always going to be an issue with GF100. MSI's mail in rebate program is slow - up to 12 weeks AFTER the conclusion of this current rebate promotion.

Overall Review: I would have laughed hysterically if anyone tried to tell me two weeks ago that I would end up purchasing a gtx465. GF100 is HOT, LOUD, and POWER HUNGRY. While nothing can be currently be done about GF100's power draw, MSI's twin frozr II takes the hot and loud and completely throws it out the window. This card has exceeded all my expectations. Coming from an overclocked gtx260 216, gains have been anywhere from 30% to 65% when not CPU bound. My rig: c2d e8400 @ 4.05 ghz GIGABYTE GA-EP45-UD3P motherboard 4 gigs ddr2 1066 ram cas 5 750 gig hard drive corsair 750w modular PSU Antec 900 case

Overall Review: First off, for those who seem to be technologically challenged, use some flippin' common sense. Giving a great product a 1 egg review because of your incompetence is ridiculous. The card not fitting in your case, or getting tons of blue screens because you are running an under powered PSU, IS NOT THE MANUFACTURER FAULT. The card specs and dimensions are in clear English, use some sense, and measure the system you intend to put them in before buying them, and down rating the card. Same goes for the power needs. Use your heads! It's getting ridiculous seeing all these people, buying solid products, then giving them poor ratings because they don't have enough common sense in the first place. That little 400w PSU isn't meant to run this type of hardware, and neither is that dinky $20 mid tower. Measure, read, and use your head, and stop blaming the manufacturers for your mistakes. And then you whine about getting a free game, come on people. Rate properly or just don't rate.

Pros: I just got this card in today:) loaded up Crysis and a tear of joy rolled down from the side of my face as I never seen such splendor grace my 22" Lcd. I'm still benchmarking and testing great video card but I must say am so happy thank NewEgg & MSI

Cons: I have to download MAFIA II from steam :( over 5gigs

Overall Review: the n465gtx has been compared with the n460gtx and there some that would tell you to get n460gtx I will overclock n465gtx to improve overall performance

Pros: Worked great for the few years I had it.

Cons: Died shortly after warranty expired which is not acceptable to me when I never even over clocked it.

Pros: This card is fast.

Cons: This cards ram is running way to hot and crashing my system. Also getting ram errors from this card. temps are yes 28c to 41c.

Overall Review: Don't buy this card it's a rip off. I'm running a Silverstone OP series 1000w PSU so it should not be a problem.

Manufacturer Response:
Dear Valued MSI Customer, We would like to apologize for the issue you have experienced with this particular VGA. Please email me directly via usersupport2@msicomputer.com your VGA's serial number and your complete contact information, subject heading "EAHN465GTX". I would like to help you get this resolved. Best Regards, User Support MSI Product Support
Luis O.
Ownership: 1 week to 1 month
Verified Owner
Refund For A Gift & BSOD12/2/2010 9:52:09 AM

Cons: "more funny than a con" people giving this product low ratings over trying to get a refund from a generous gift & and others that over look at the dimentions of this product just to find out that it won't fit + specs people this video card is power hungry your 350 PSU would not be enough to run this card stable that's the cause of your blus screens

Overall Review: these are educated investments research the product look up reviews before you check out from the chopping cart

Pros: Awesome card, I can run FFXIV on high settings with no problems, run very quiet, cool, nice fit for my HAF-X, so far i haven't played a game that it can't handle

Pros: Great Cooling , Awesome performance in SLI. I did not have the Extra Memory chip to bios mod these up to 470 specs.