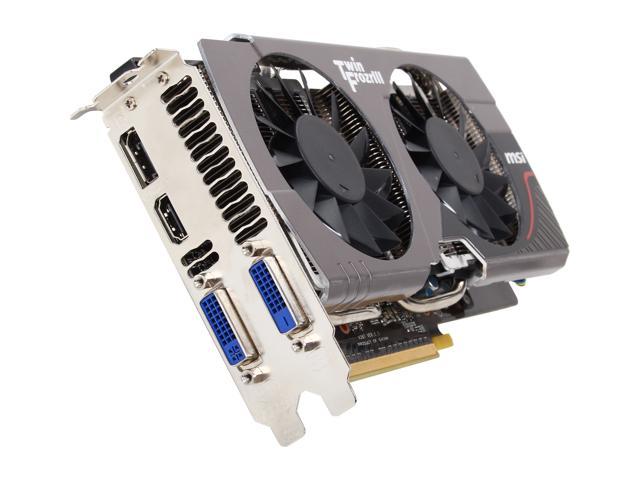 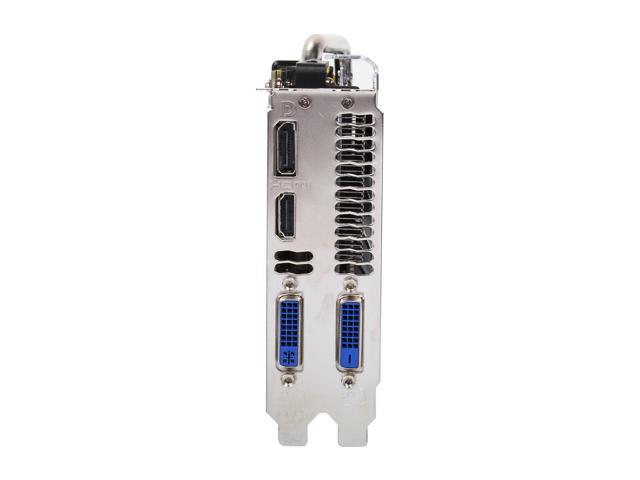 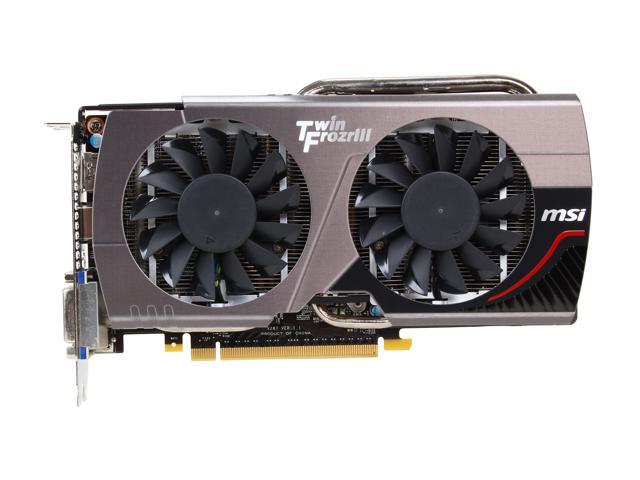 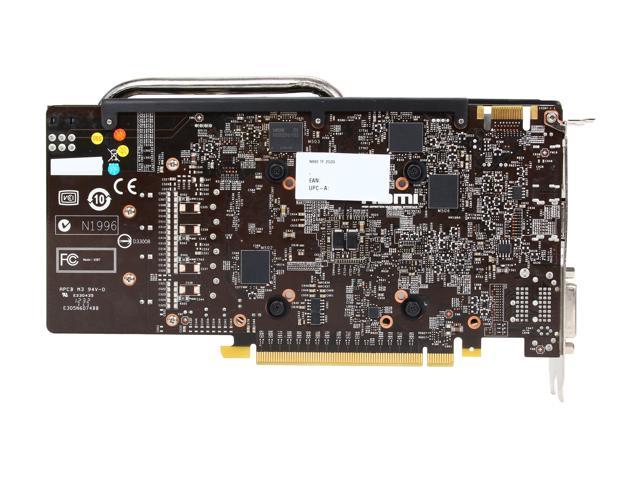 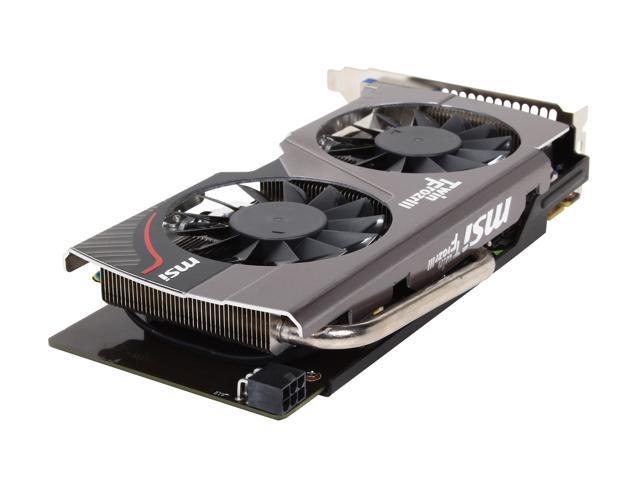 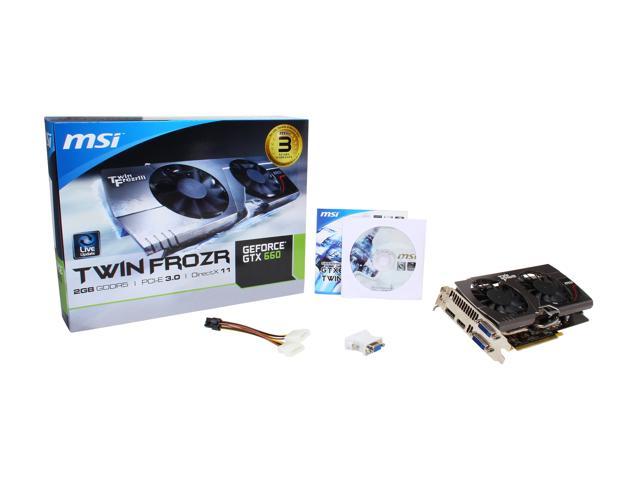 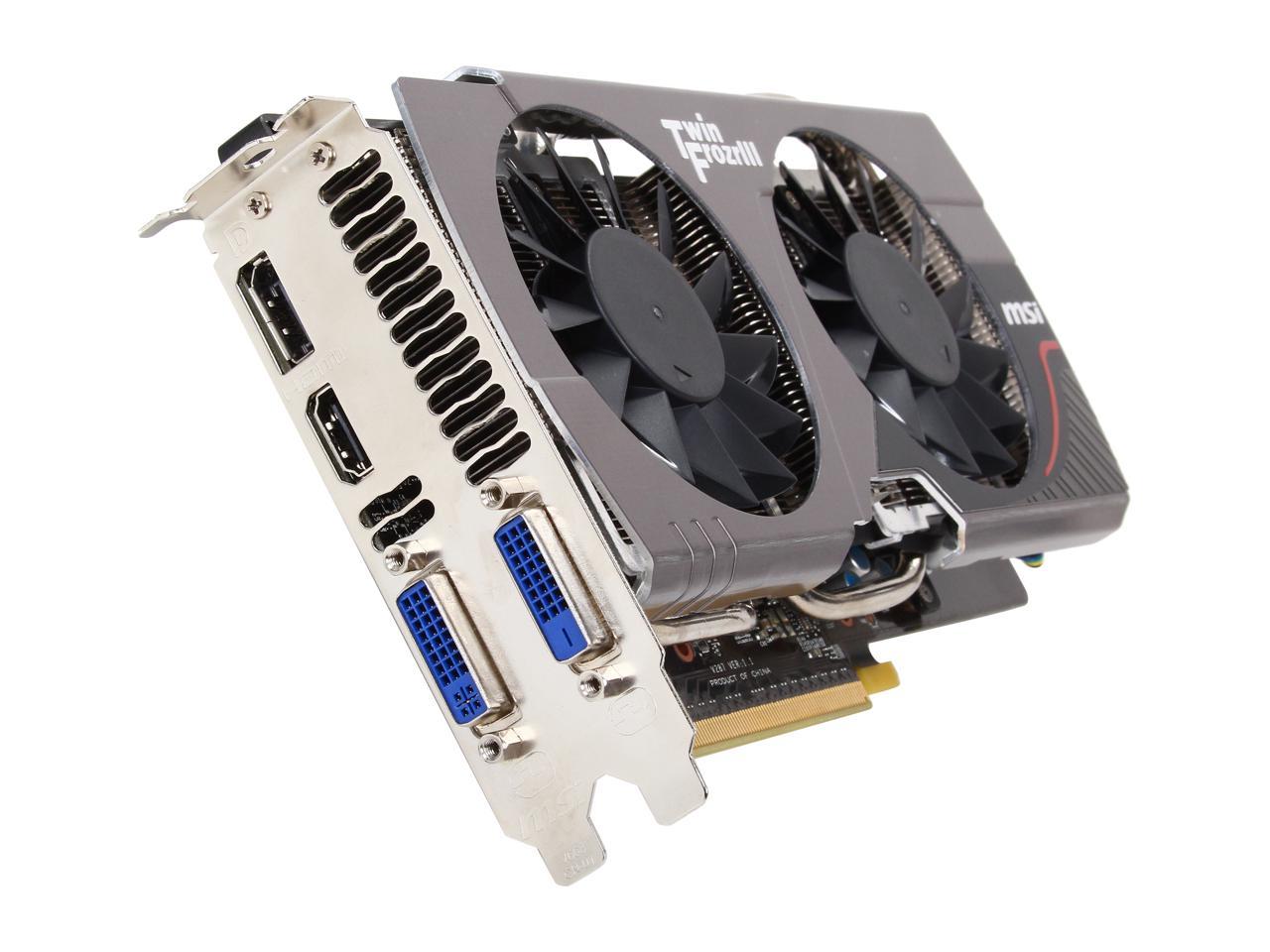 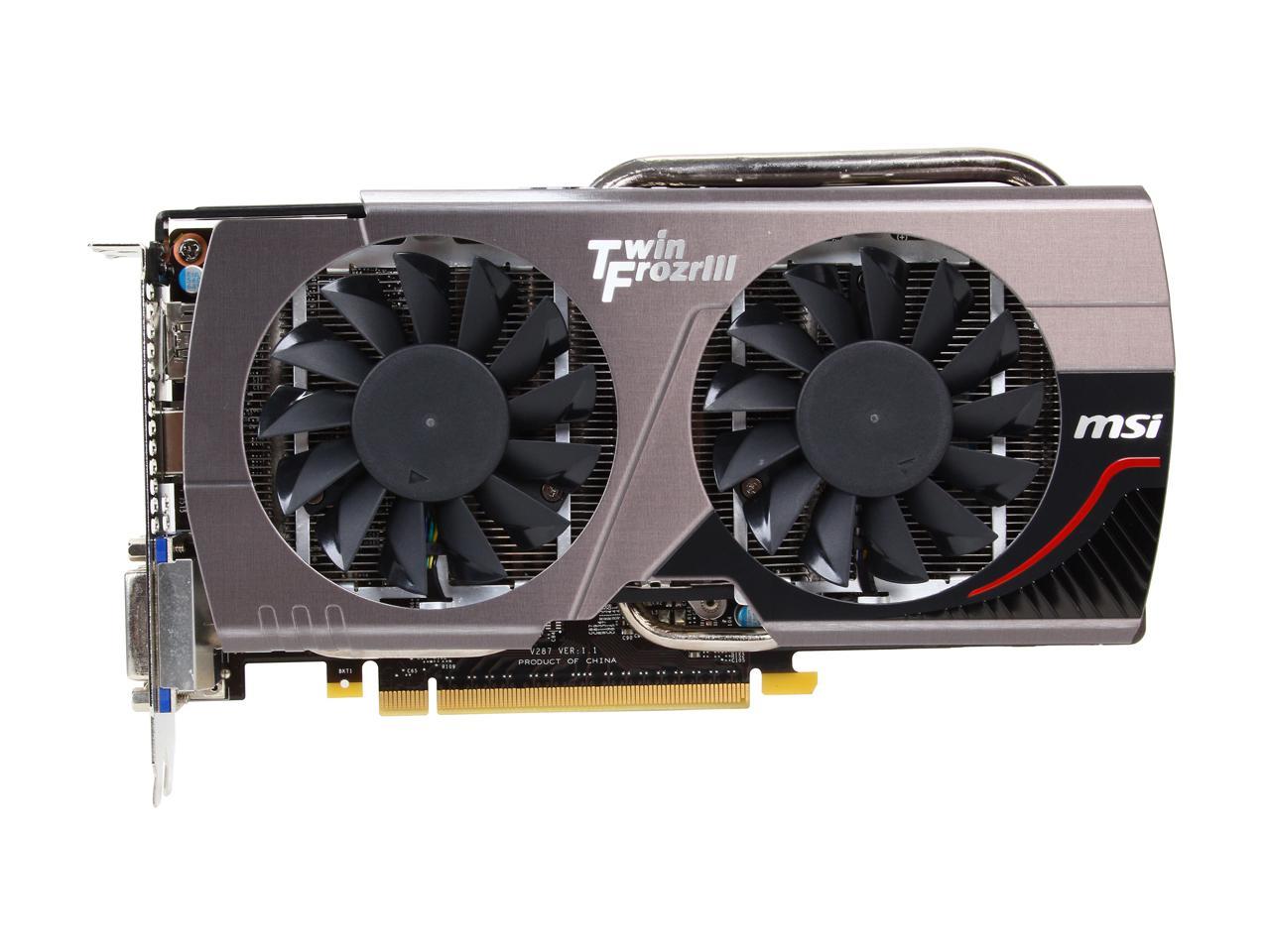 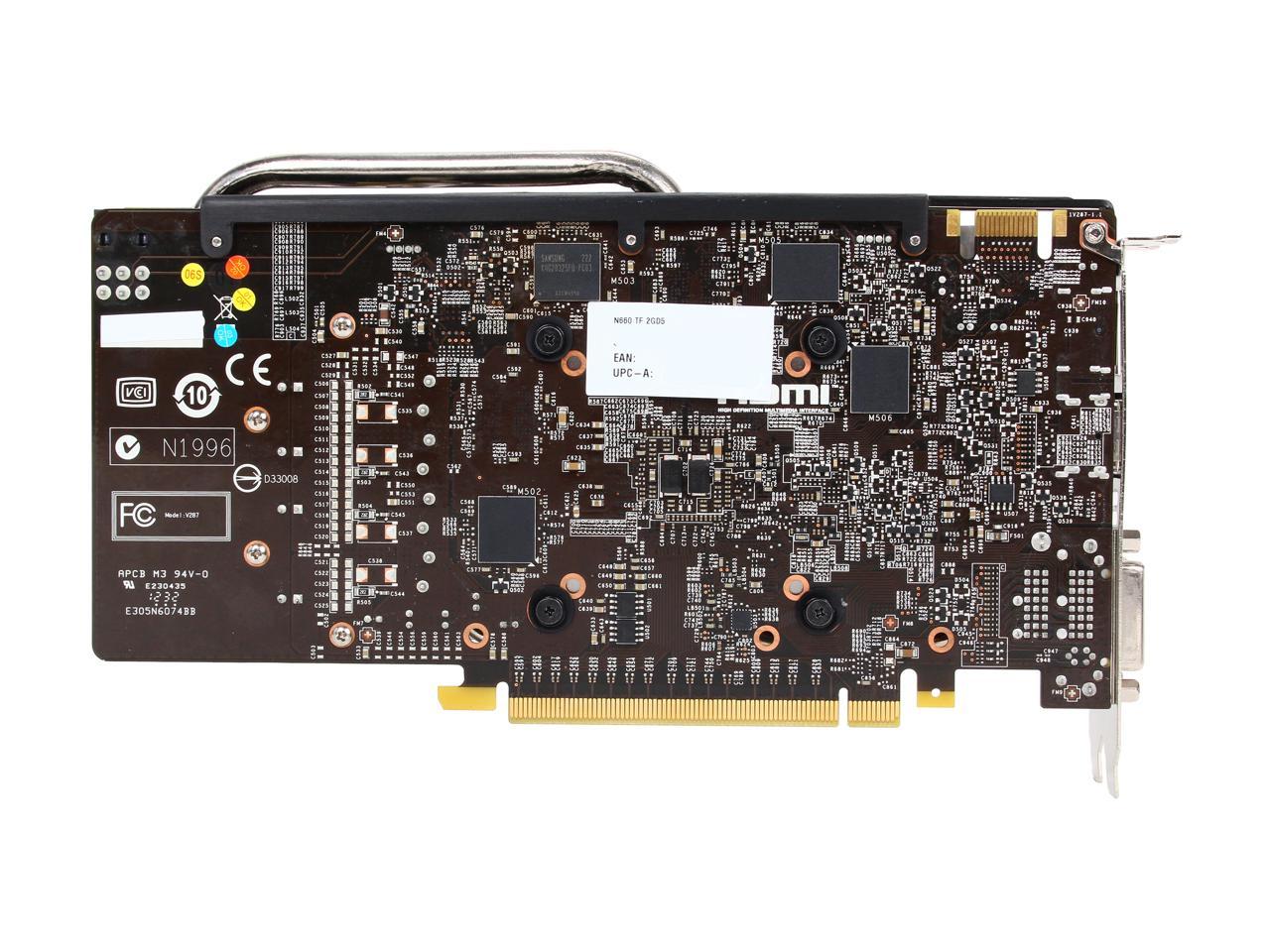 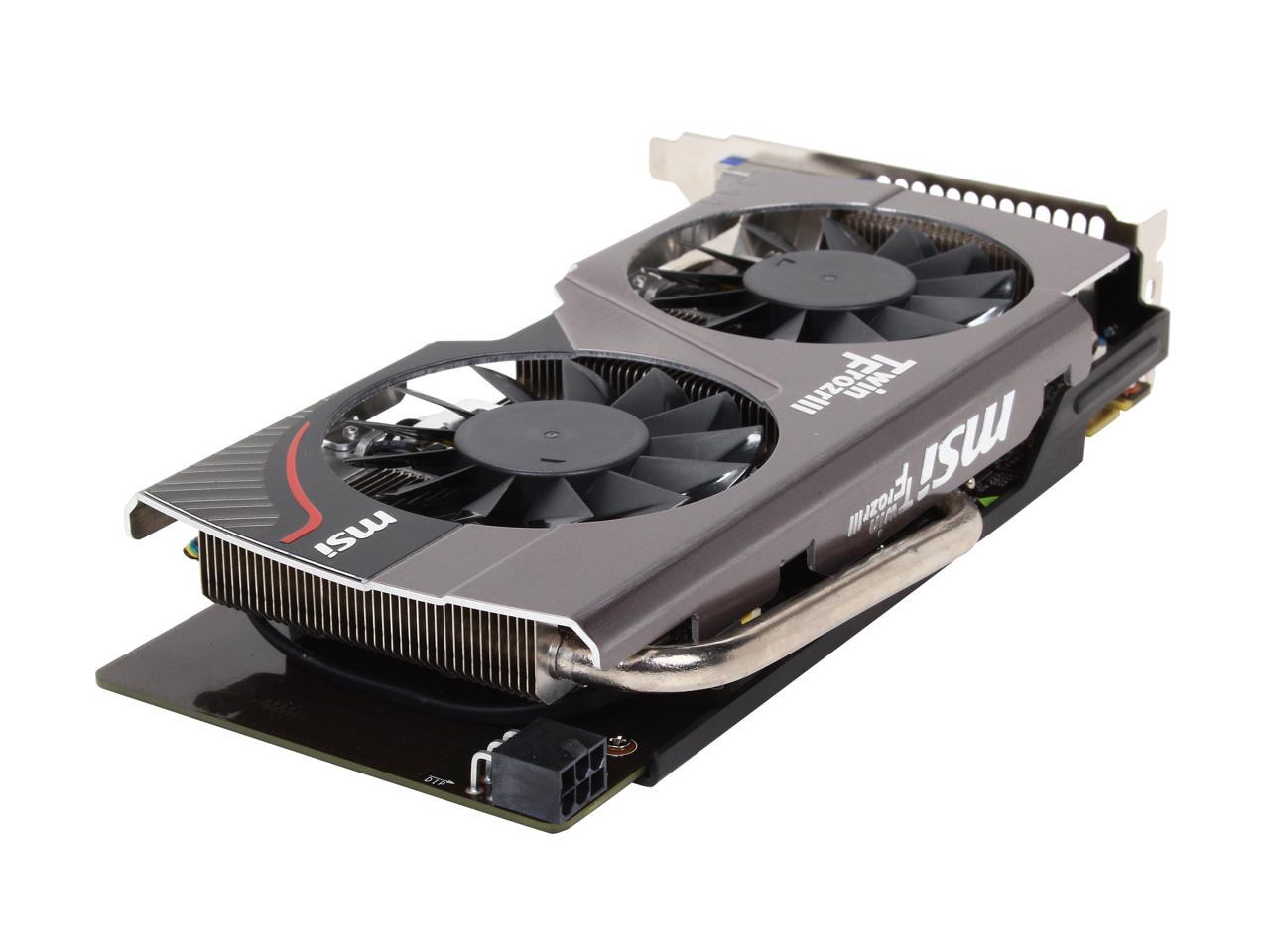 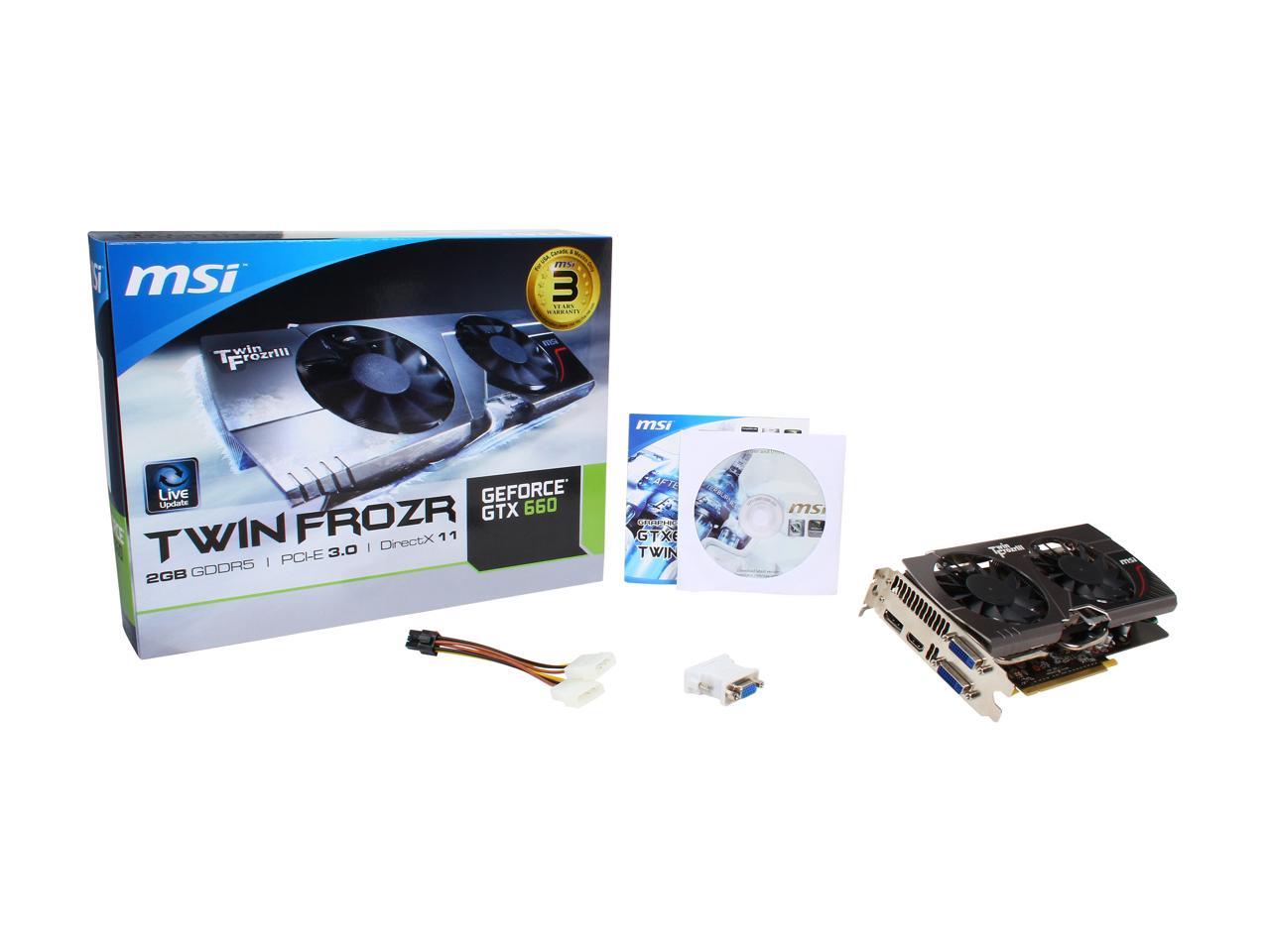 The new card boasts the popular Twin Frozr III cooling design with dual 8cm fans with Propeller Blade technology and Superpipe technology. The MSI GTX 660 Twin Frozr GPU temperature runs 19° lower than the reference board and noise is reduced by 12.9dB to deliver the best thermal and noise performance. All solid capacitors ensure an ultra-long 10 years of life, lower temperatures, and higher efficiency, and the aluminum core prevents potential malfunctions under extreme conditions. The GTX 660 Twin Frozr also supports the Afterburner overclocking utility, making it simple to adjust the graphic card's power and timing for even more performance. With support for NVIDIA 3D Vision Surround and a maximum of 4 display outputs on a single card, users will be able to enjoy the ultimate in gaming and multi-tasking.

Pros: Runs cool and cannot hear it over CPU fan.

Pros: I have this card paired with a FX8350 and 12gb of Corsair Vengeance 1600mhz RAM and it plays just about everything at ultra setting. Just awesome.

Cons: Overkill for the non-gamer. If MSI had offered a Twin Frozr version of the GTX 650 for $50 less that would have been perfect for my needs.

Overall Review: If you're building a silent Linux desktop graphics card this is an excellent choice. Yes, you can get passive cards for less money, but they're slower and run a lot hotter. This card is for all practical purposes inaudible in everyday use, and its temperatures stay around 12°C above ambient.

Pros: I have waited about 3 months to write a review to see if my thoughts would change over time.. So far It has far exceeded my expectations! This is the quietest gpu I have ever owned, and that in part is why I bought it. I own a SG-05BB mini itx case and quiet and portability is really important to me! Even when under load and not having the best airflow for a mini itx case(Stock), It stays Cool and quiet under heavy load while playing Battlefield 3. 62*C is the highest it has reached! Now my cpu(Core i5 3350p) on the other hand gets pretty hot with the stock cooler when running bf3, (75*c). But I can play BF3 multiplayer 1920x1080 at absolute MAXIMUM settings including 4xAA/8xTXAA/16AF at around 50 fps average, 35 fps lowest! Smooth! Metro 2033 plays great also at maximum but with the TXAA setting(Alot less taxing), at about 45 fps. Tomb Raider at maximum everything about 120 fps average! Now everyone of these games never drop below 30 fps! I see my friends with gtx 690/2 7970's and all really high end hardware, There really isn't much of a need for all of that unless you plan on playing with 8x AA and beyond or on a multi-monitor/beyond 1920x1080 screen!

Cons: Not a thing!

Overall Review: I am actually glad I didn't got with a higher end card. At this point there really isn't a need for more power! It still plays the newest games out there at maximum settings! My Setup: Silverstone SG-05BB/450w Core i5 3350p MSI Gtx 660 twin frozr(Fits like a glove) Gigabyte z77 mini itx. 8 gb Dominator 1600 mhz ram 2 tb WD HDD Windows 7

Cons: None. Maybe no case sticker.

Pros: beautifully crafted, quiet at idle Great tech support, 2nd person offered to reflash the card to legacy mode since I couldn't get a bios update out of my mobo mfg (but too late as I'd gotten a different answer and sent it back already)

Cons: incompatible with some bios (online tech suppt is fast but not fully informed, email USreview@msi.com and they're on top of it but take a day, great folks). My mobo isn't one of the named ones but had an ami P01-a1 bios and conflicted (hard).

Overall Review: Lovely piece of hardware, and tech suppt is great (albeit the online tech support was unable to help me, but the email above led to folks who could have helped if I'd reached them sooner). Be very careful if you have certain bios, but I think it's workable even w/ that with this info. Good luck.

Manufacturer Response:
Dear Valued Customer, We apologize for the issues that you are having with this product. Glad that we were able to serve you. If you have any questions or concerns regarding the product, please do not hesitate to contact us directly at usreview@msi.com and we will be more than happy to assist you, thank you. Best Regards, MSI Review Team | usreview@msi.com
Eric M.
Ownership: 1 month to 1 year
Verified Owner
Very Nice10/16/2012 5:31:38 PM

Cons: None so far. After about a month and a half of use I've encountered no problems.

Overall Review: I average about 50-60fps (with adaptive v-sync on) in BF3

Pros: Fast- Cool- Low power- Runs all my games on high settings without any hiccups

Cons: Required an RMA of a card i thought to be DOA when in fact I had to aquire a beta BIOS flash for my MSI mobo to get up and running.

Overall Review: If you are using an MSI AM3 board you will require a beta bios from MSI, just email them and they will promptly email you the bios!