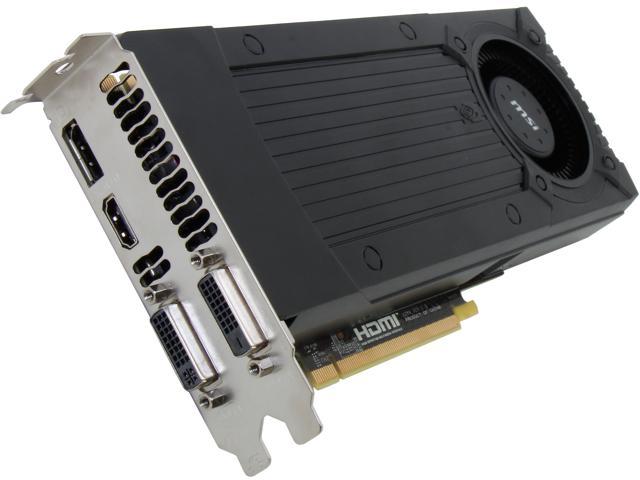 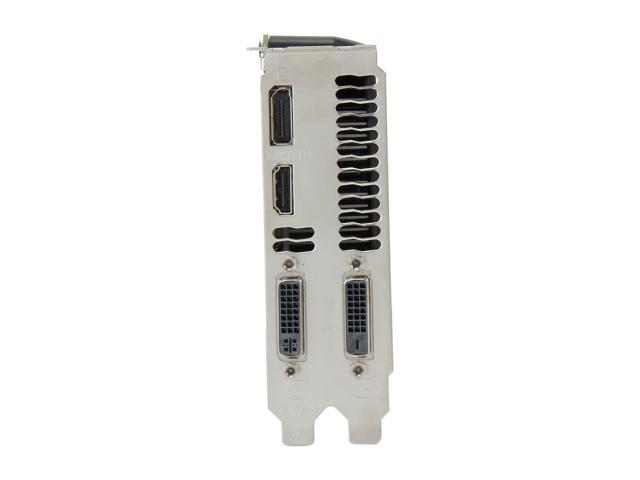 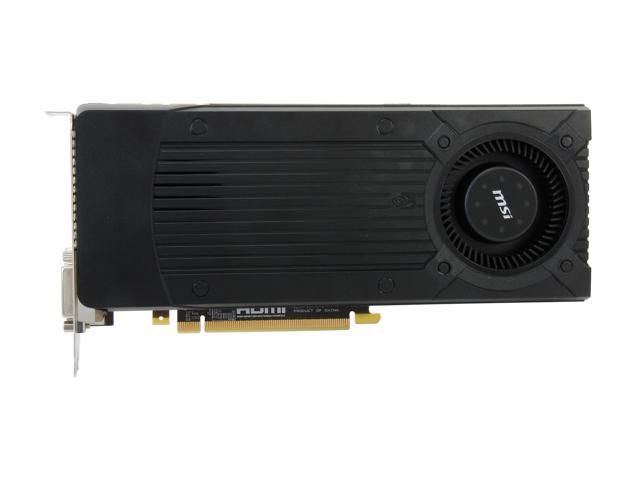 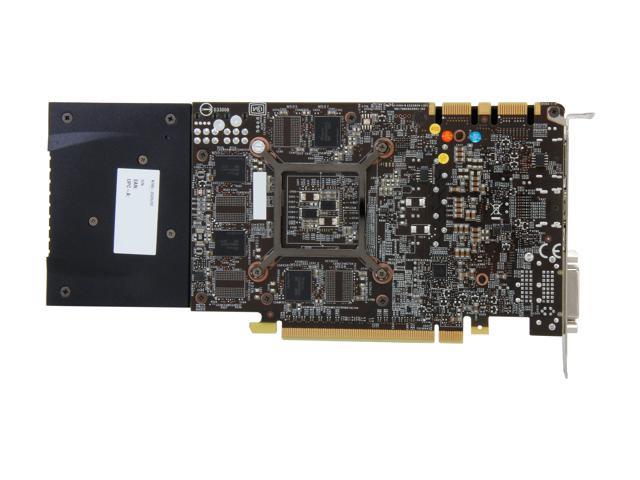 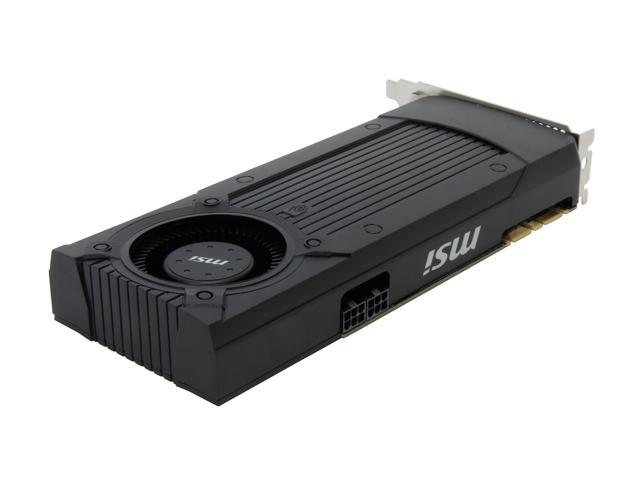 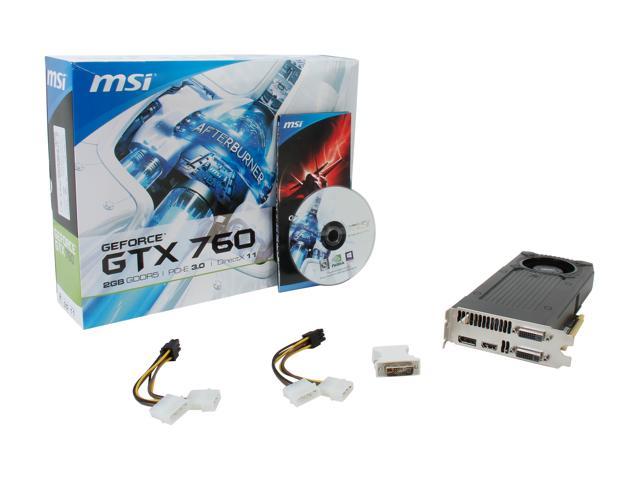 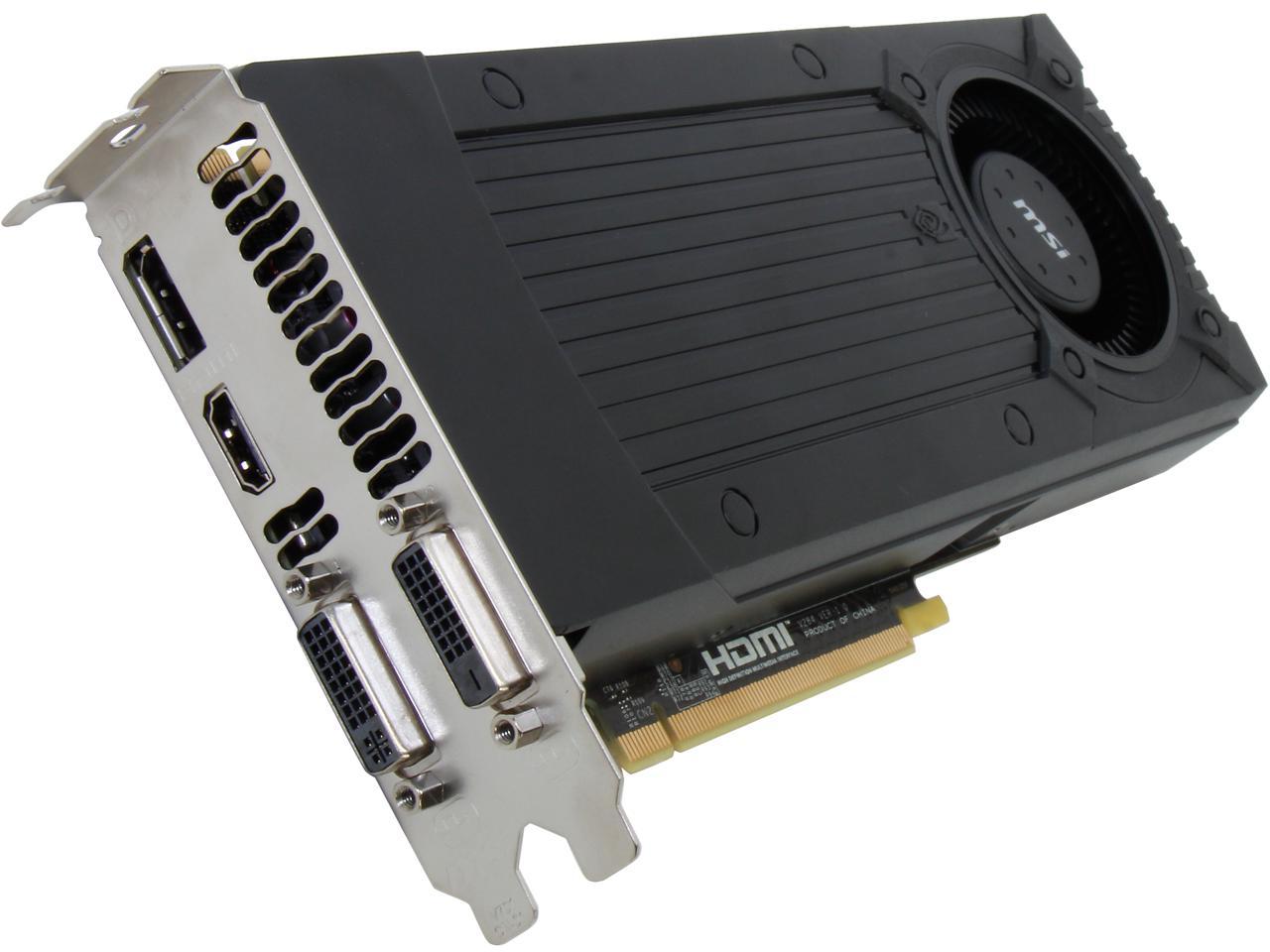 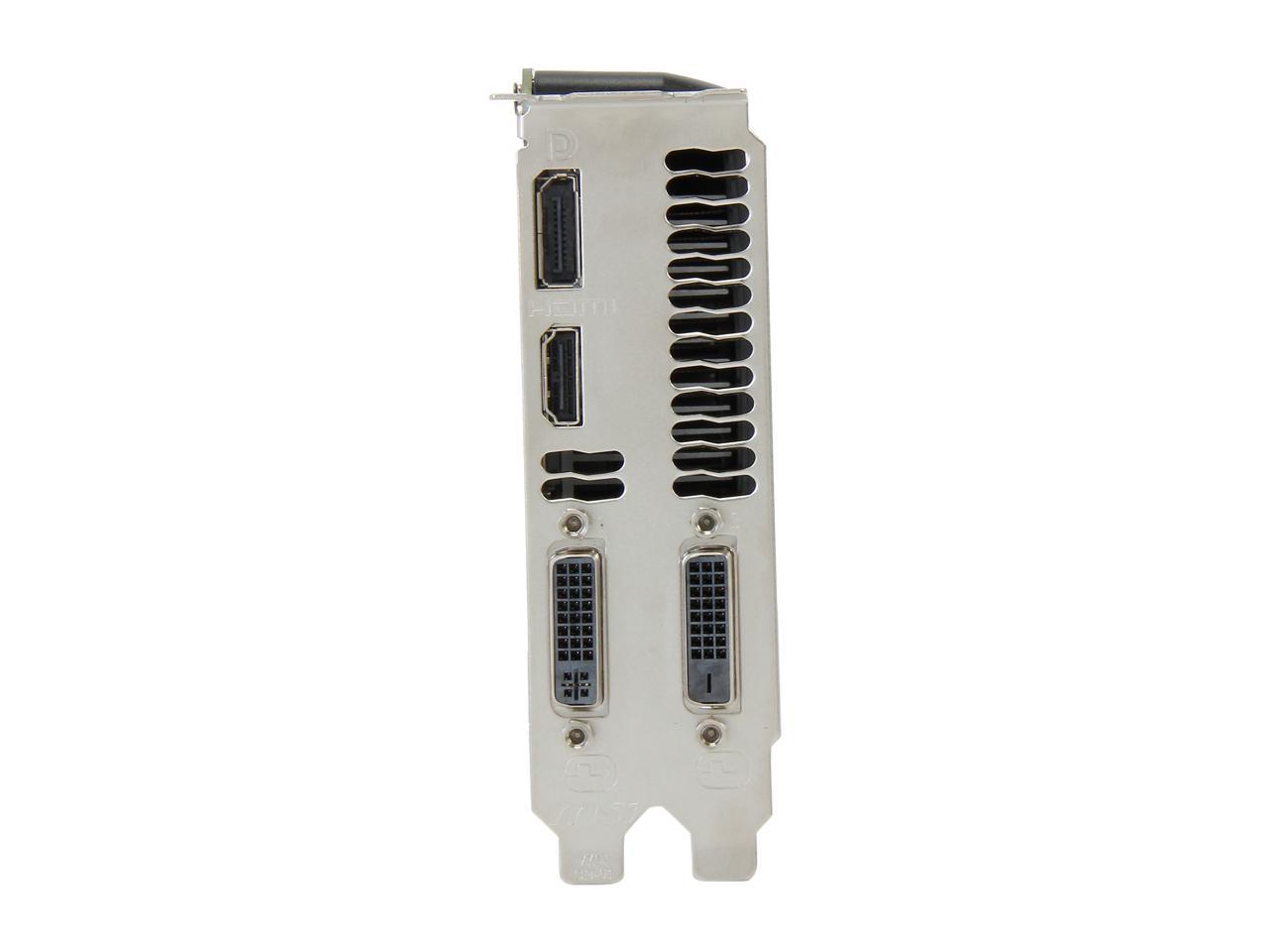 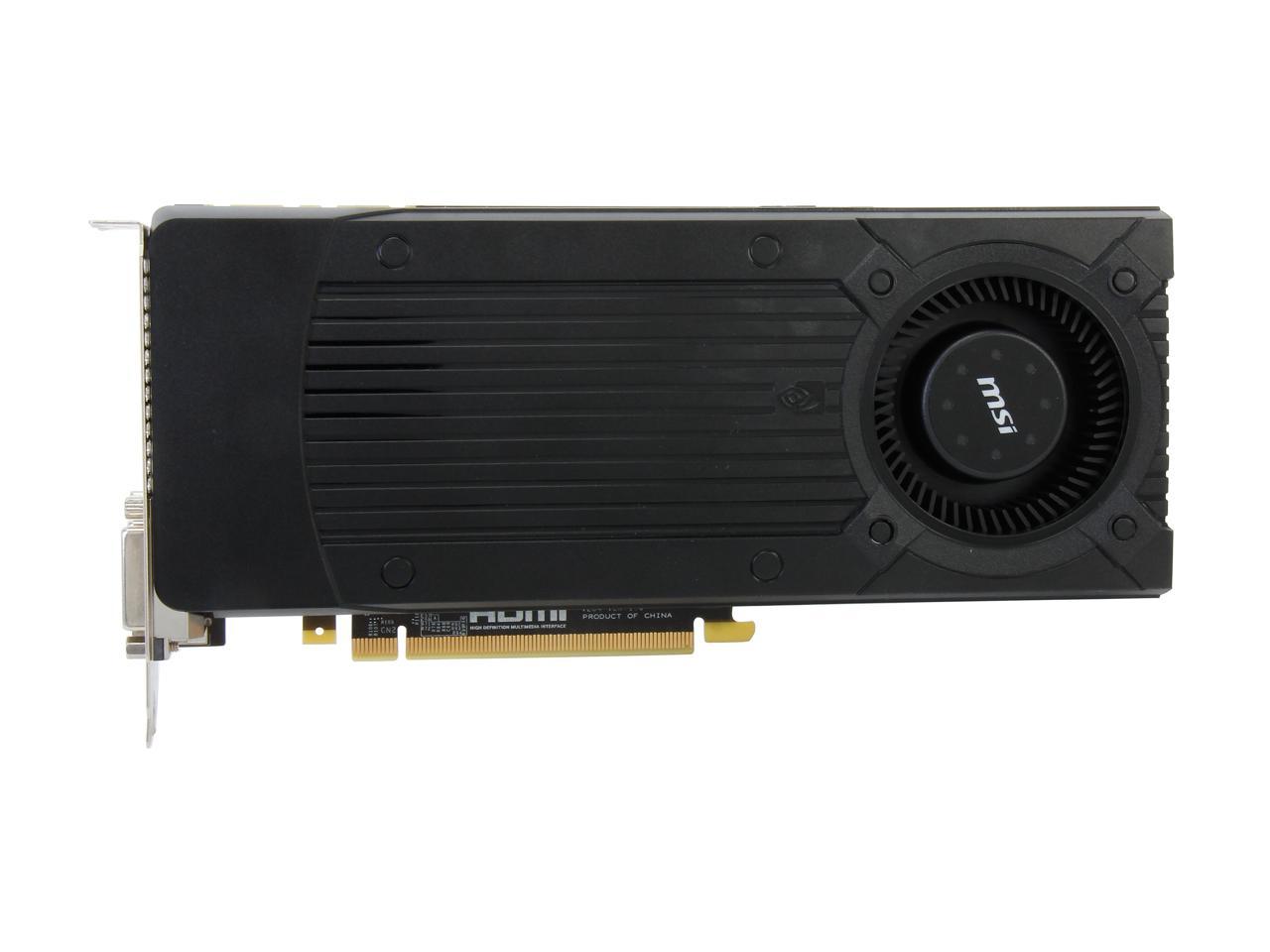 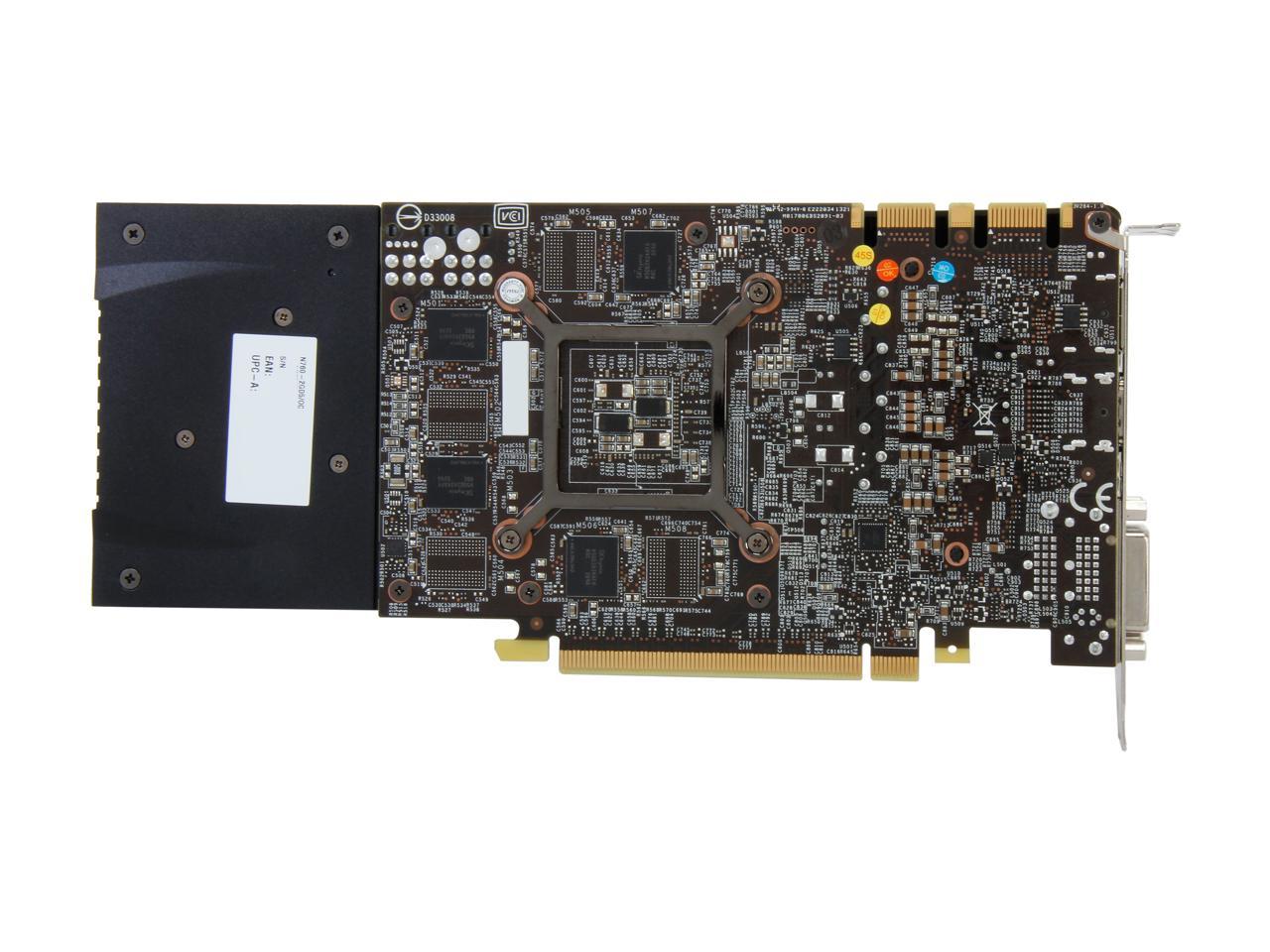 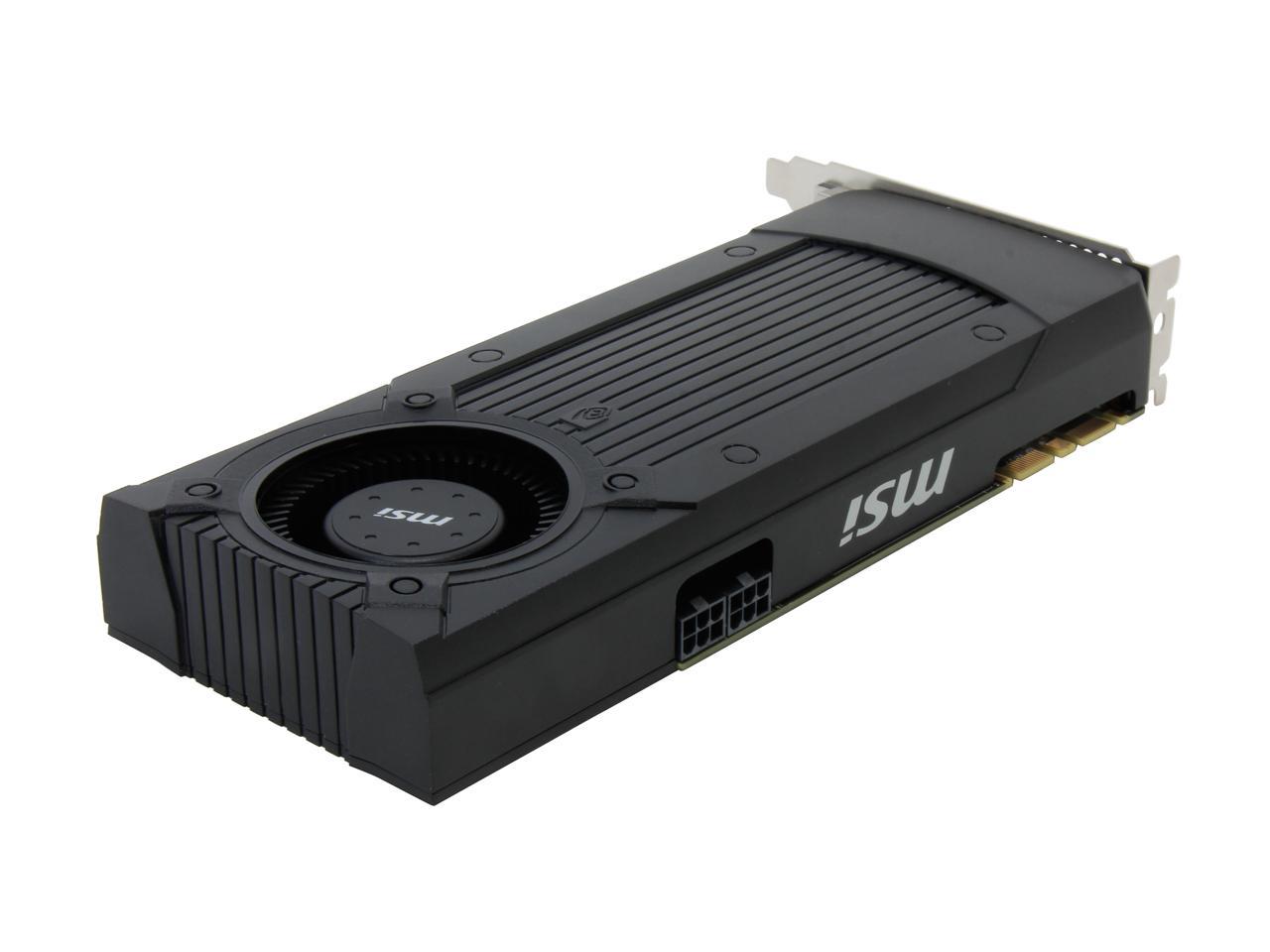 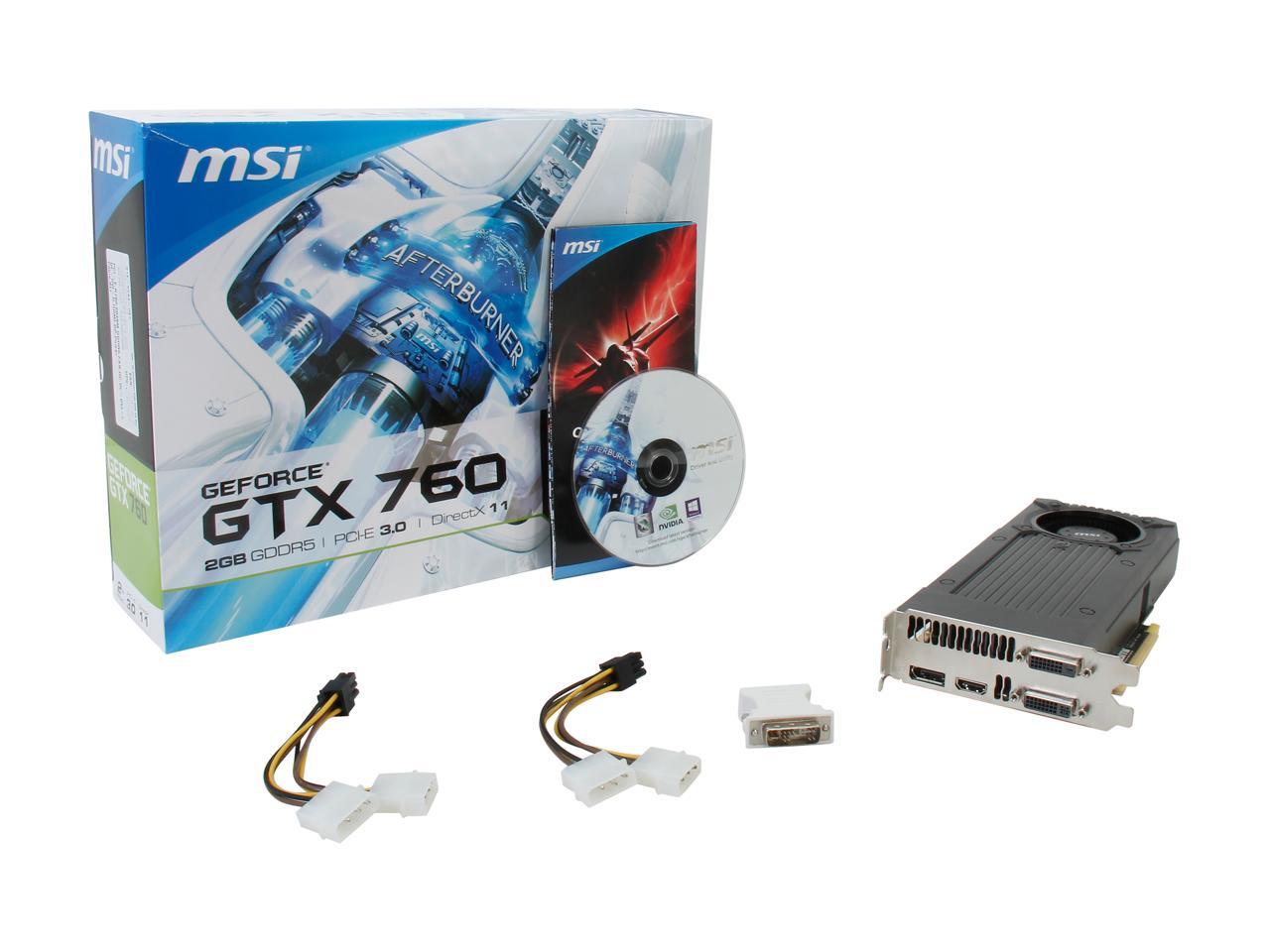 Powered by the NVIDIA GTX 760 GPU, this card is built around 1152 CUDA cores with a gigantic 2GB GDDR5 memory. It produces amazingly beautiful graphics and lifelike environmental interaction in the hottest DirectX 11 game titles. You'll enjoy a new level of realism in your favorite FPS, RTS, MMORPG, and RACING games. The MSI-exclusive Afterburner utility enables you to extract more performance by tuning vital GPU parameters. An array of advanced NVIDIA technology – including GPU BOOST 2.0, NVIDIA SLI, NVIDIA 3D Vision Surround, and NVIDIA PhysX – offers you more than one way to elevate your gaming experience.

Pros: Decently quiet and great temps even when overclocked with the stock cooler. I can run watchdogs, COD ghosts, etc... all on ultra 1080p at 60fps

Cons: MSI rebate is a joke. I sent in the rebate with all the required forms and it was post marked on the correct day. They sent me an email saying my rebate was denied due to it being postmarked out of the date range (it was in the date range) and also that I didn't include my newegg invoice (I did). Others have had the same experience, good luck getting any kind of rebate out of MSI.

Overall Review: Newegg is awesome as usual. Got my video card the day after ordering with the cheapest shipping. The card went in and drivers installed without a hitch and has been running like a champ for a few months.

Cons: Low quality fan motor. Even at idle, I can hear the fan motor on this card. I've got a HTPC built in a fractal design node 605. The case has (2) 120mm fractal design fans that were included with the case and a 140mm Noctua case fan, a 140mm Noctua fan on a Noctua NH-C14 CPU cooler, a 550W Seasonic Power supply and then this GPU. Even at idle, with all of the sound insulation in the case, I can hear the fan grinding along, it's easily the loudest component in my HTPC. I bought the reference design card to exhaust the heat out of the case since an open air cooler might have increased case temperatures significantly, resulting in higher case fan speeds.

Overall Review: When I purchased the card, MSI was running a $20 rebate that shows up every once in a while on this card. After sending in the rebate, I was contacted months later, after the rebate window had closed long ago, by the rebate company stating that I had not included multiple items required for the rebate. Logging into my online account provided to track the rebate, I found scanned images provided by them that showed EVERY SINGLE "MISSING" ITEM. Do not buy this card if you are depending on the rebate to make the deal, you can get a higher quality manufactured board from Asus, Gigabyte or Zotac that will not only have higher performance, but will probably be overall higher quality.

Cons: Not as fast as more expensive models, next generation Maxwell GPU models due with in a few months, 2GB can be challenged in some gaming apps, probably not enough power for high resolution gaming

Overall Review: Replaced a 5 year old MSI GTX 260. Did it to support the 4K Seiki TV used as a monitor. I was only expecting a modest speed improvement if any in my mostly editing and browsing applications. I was wrong. It is a lot faster and seems to make the whole system run better. When it connected via HDMI to the Seiki monitor, the monitor recognized it and ran 4k automatically. I've tried playing some HBO movies online and it scaled them to 4k seamlessly. The housing is plastic, not as impressive as the GTX 260s longer metal housing. But it is lighter and queiter.

Pros: Clean looking card, runs most Rift Tech Demo's at 75 FPS on my DK2, my AMD 6770 was running around 35 FPS, and was $170 when I pulled the trigger, seemed like a great deal for something to come close to an effective setup for messing about with VR (which is all I'm really doing). Can now do fast rendering in Blender 2.72 Cycles :) Oh also plays TF2/HL2 super smooth at higher quality levels than I could achieve before.

Cons: Probably going to be superseded by the, rumoured, GTX 960 early in Q1 '15 which will probably be some % faster than the 760 at around the same $200 price point, per online gossip but likely not so much faster that I'd consider taking a loss on the 760 to buy a 960.

Overall Review: Recommends a 500W PSU so had to buy a new one as my old PC had a 380W unit, not a ding on the product but something to bear in mind if you built a mid-range PC and spec'd the original power supply for a lower end graphic card like I did.

Pros: I bought this card for my sisters first gaming computer. I was on a budget of 600 and I decided to get this card. I am not disappointed at all. This thing is amazing for the price. I haven't put it through a lot of graphic intense games, but it runs incredibly smooth with what I have thrown at it.

Pros: -Worked out of the box -Quiet -Running Arma 3 and Total War: Rome 2 on Ultra settings without issue. -Got it for $169

Cons: -Very large card, almost did not fit into my box. -One fan on the bottom side of the card, i am wary that this could pose a problem further down the line.

Overall Review: I upgraded from a 4 y/o GTX 460 SE. Although the old card was running pretty well and keeping up, it had over the last year or so started struggling with newer games and i was having issues running on High settings, in many cases i was moving to medium just in case. This new card is running Arma 3 and Total War: Rome II on Ultra settings without issue.

Pros: Outstanding card. Best buy I've had why get a 600 series for ten bucks less. Has great temps never overheated for me. I'm SLIing this card only a few games are improved due to the high quality of just one.

Overall Review: Just FYI if you want to OC ths use afterburner and I've done a lot of research the perfect OC is +140 core clock, +200 memory clock. Give and extra 5fps as if it needs that. Also in SLI I would have to say two have the equality of just below a titan. Cannot imagine 3 way SLI.