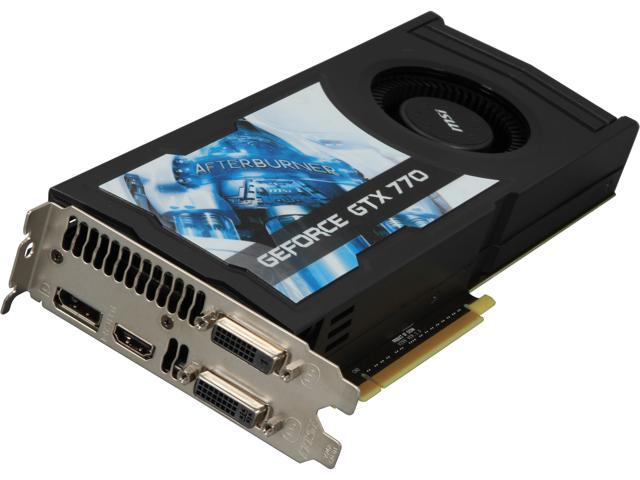 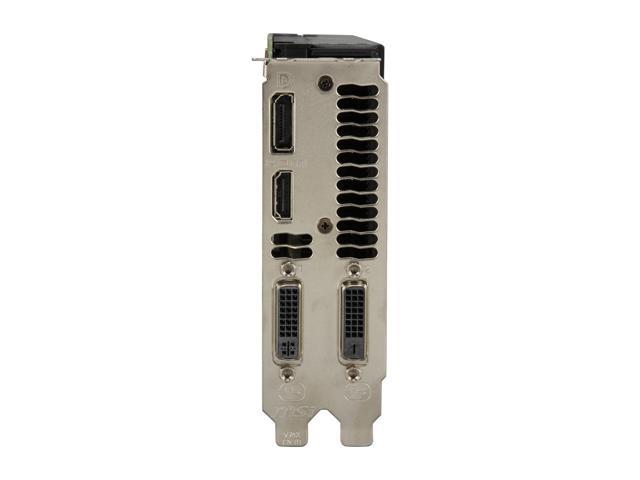 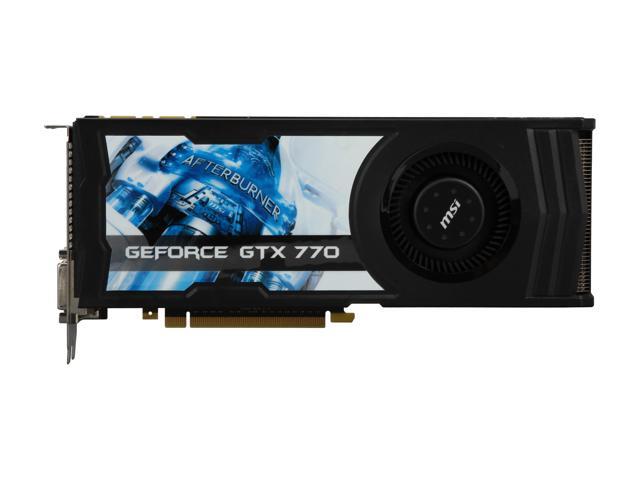 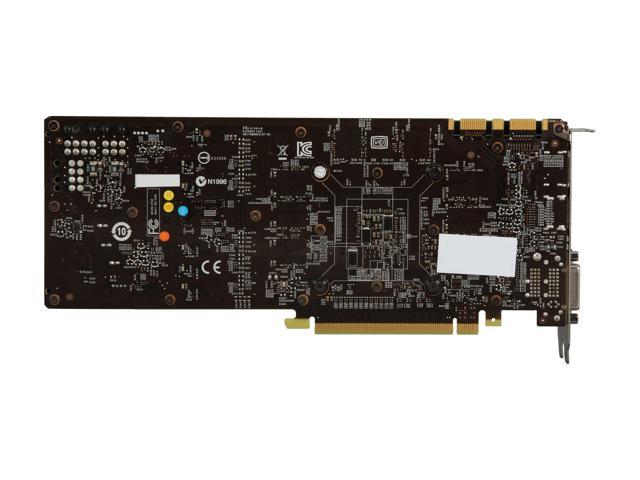 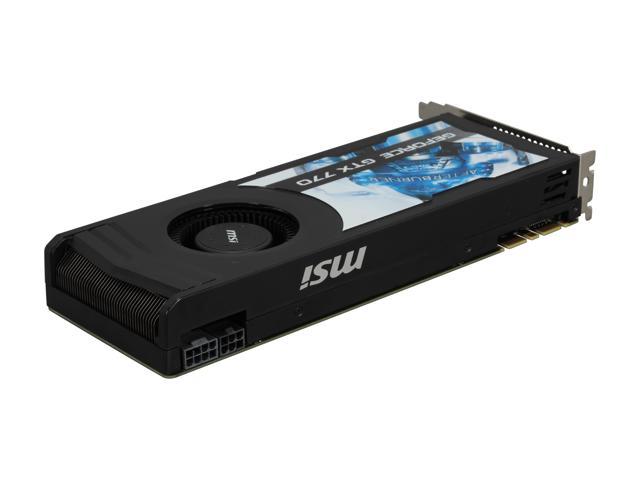 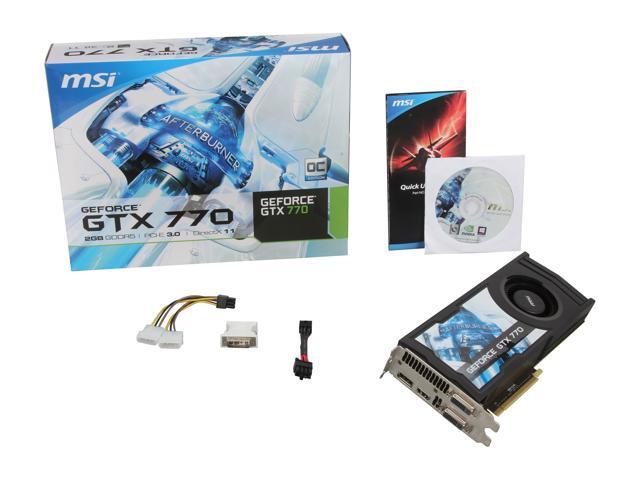 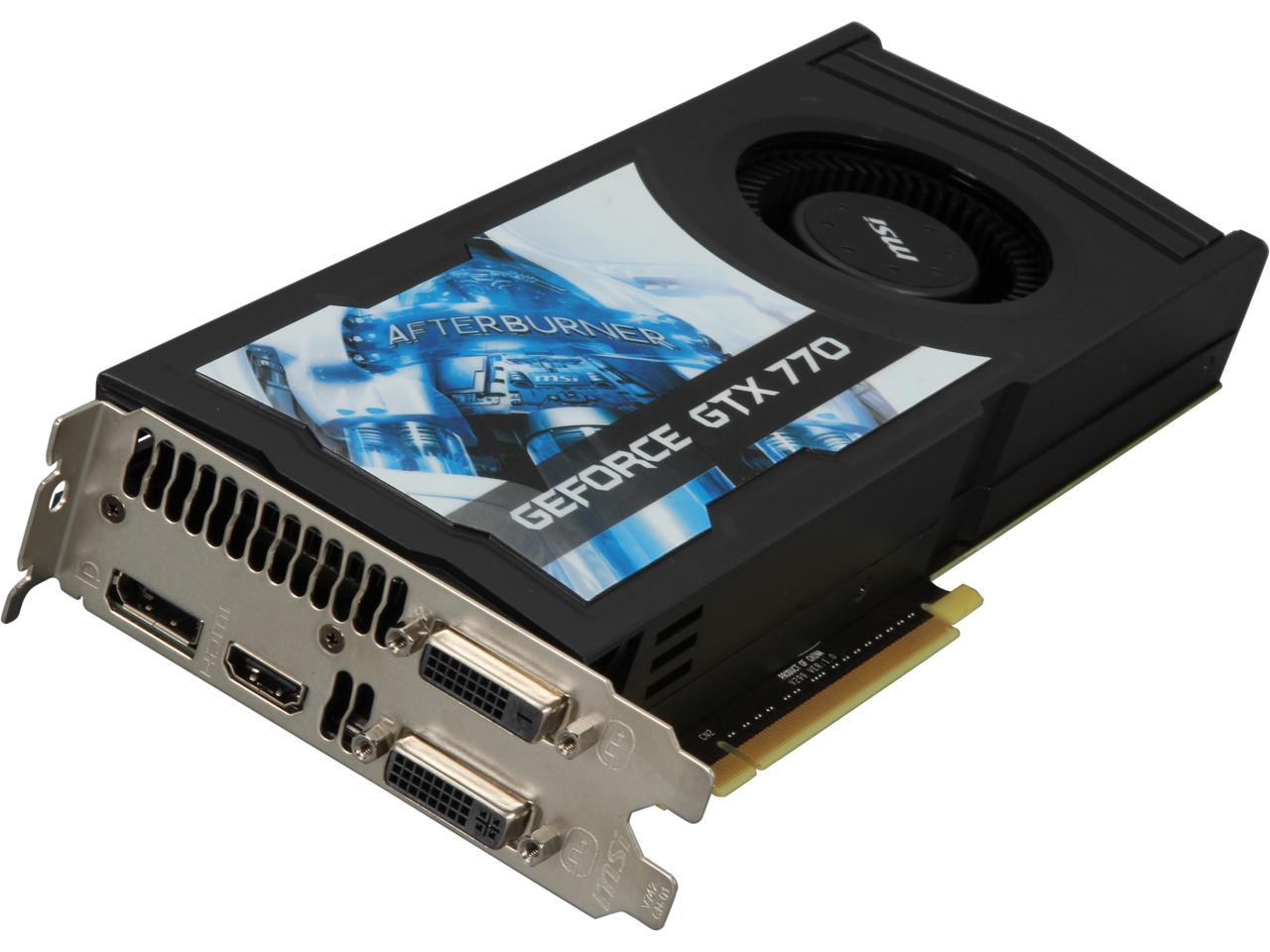 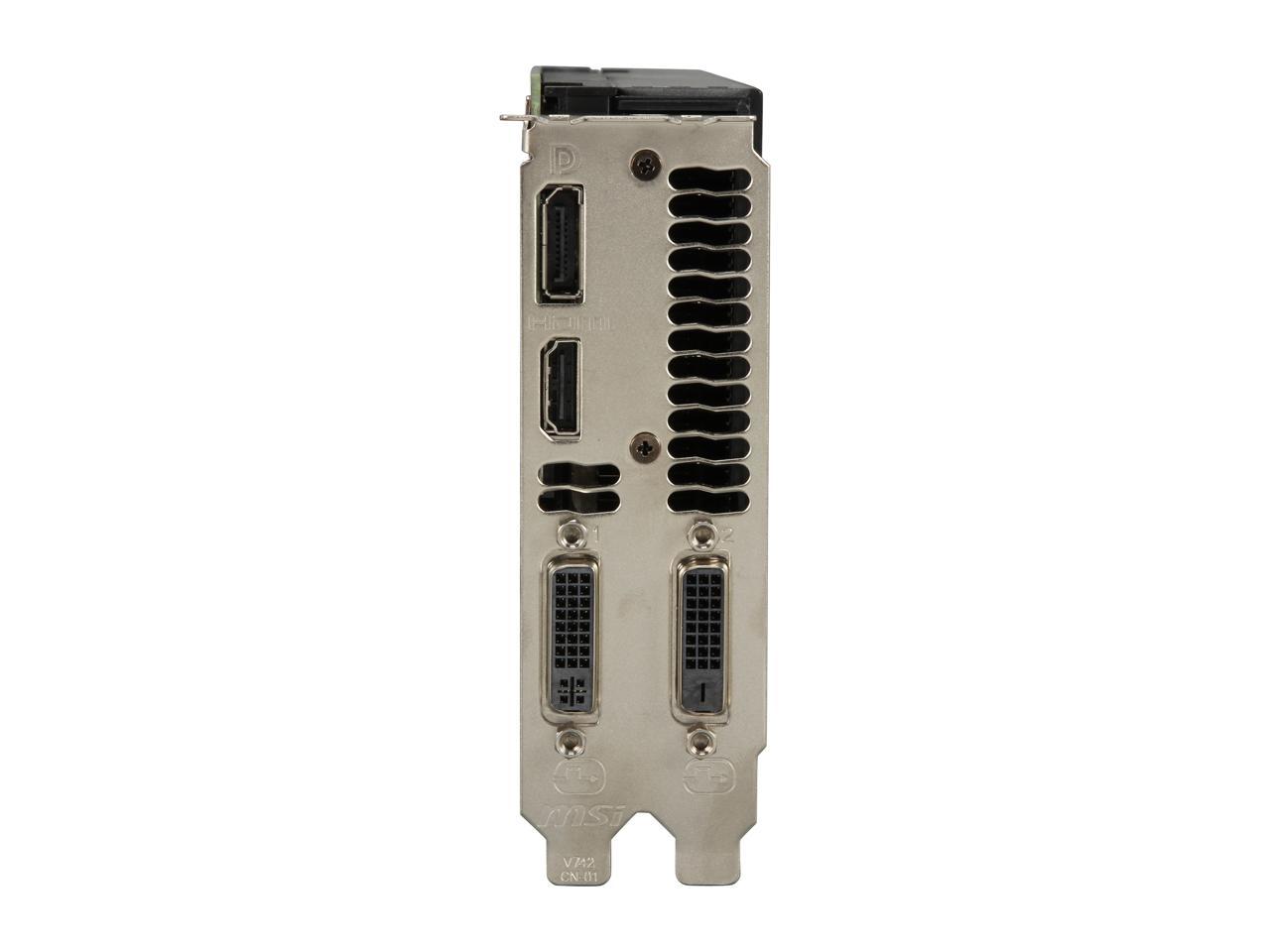 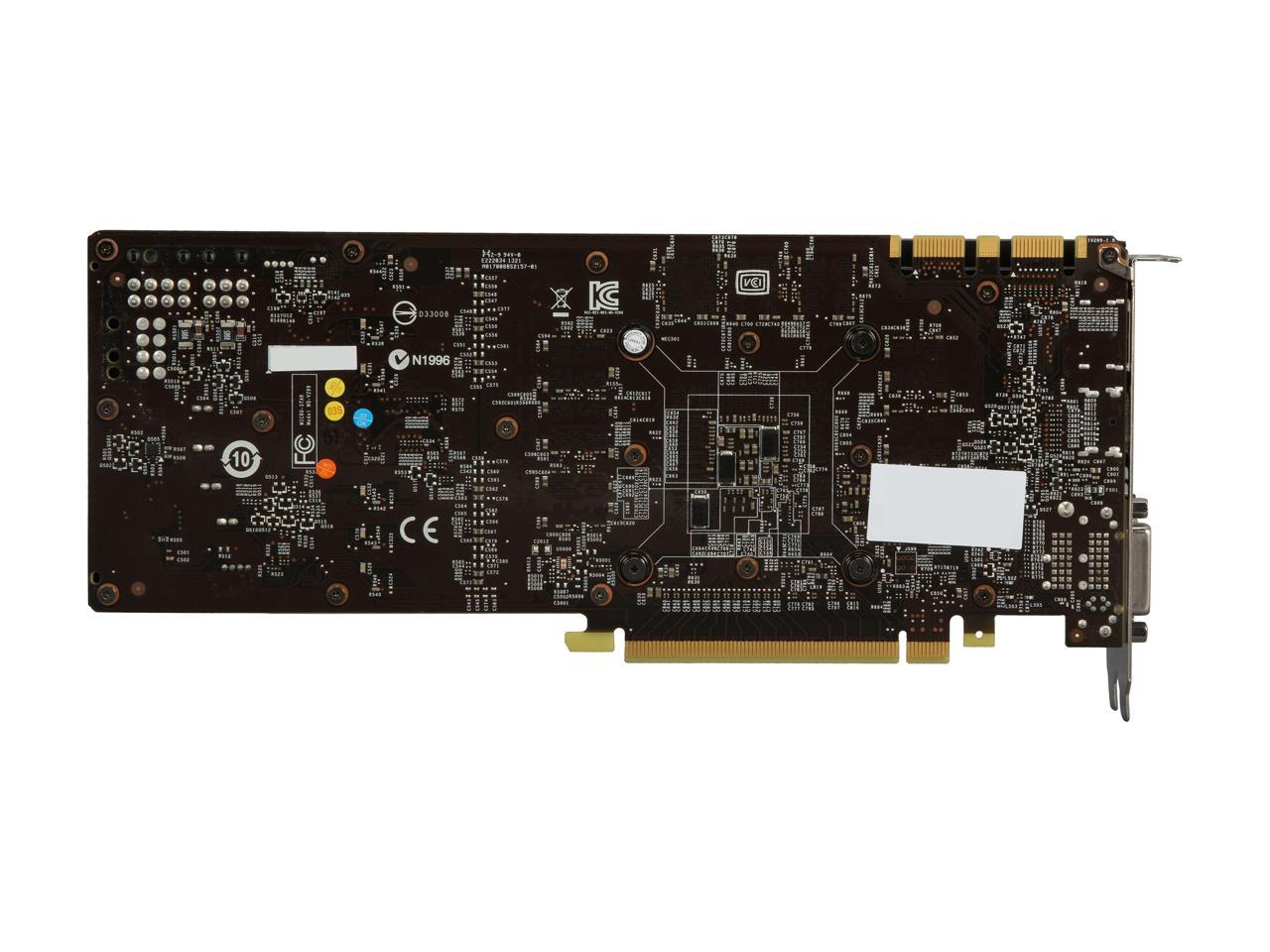 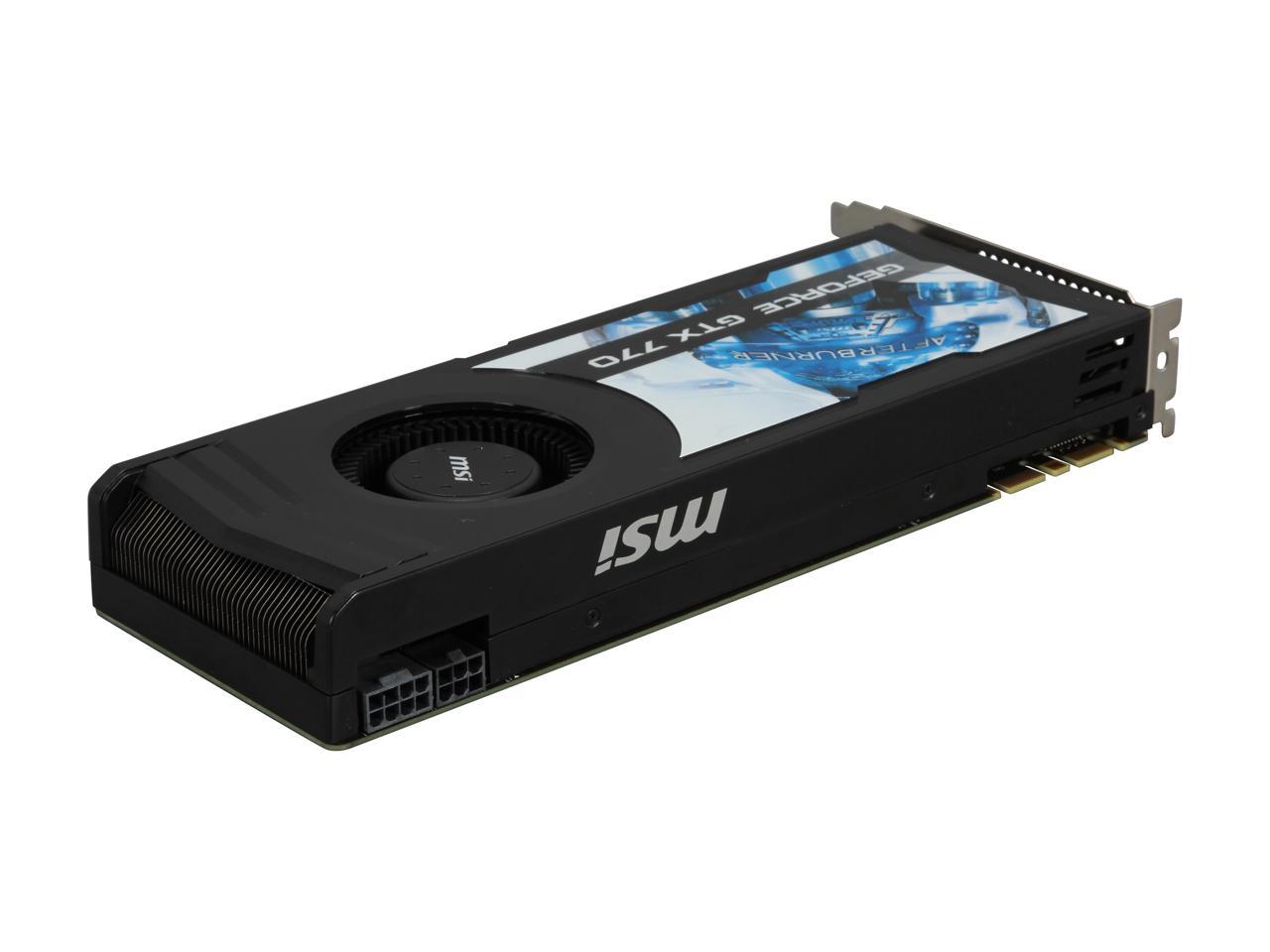 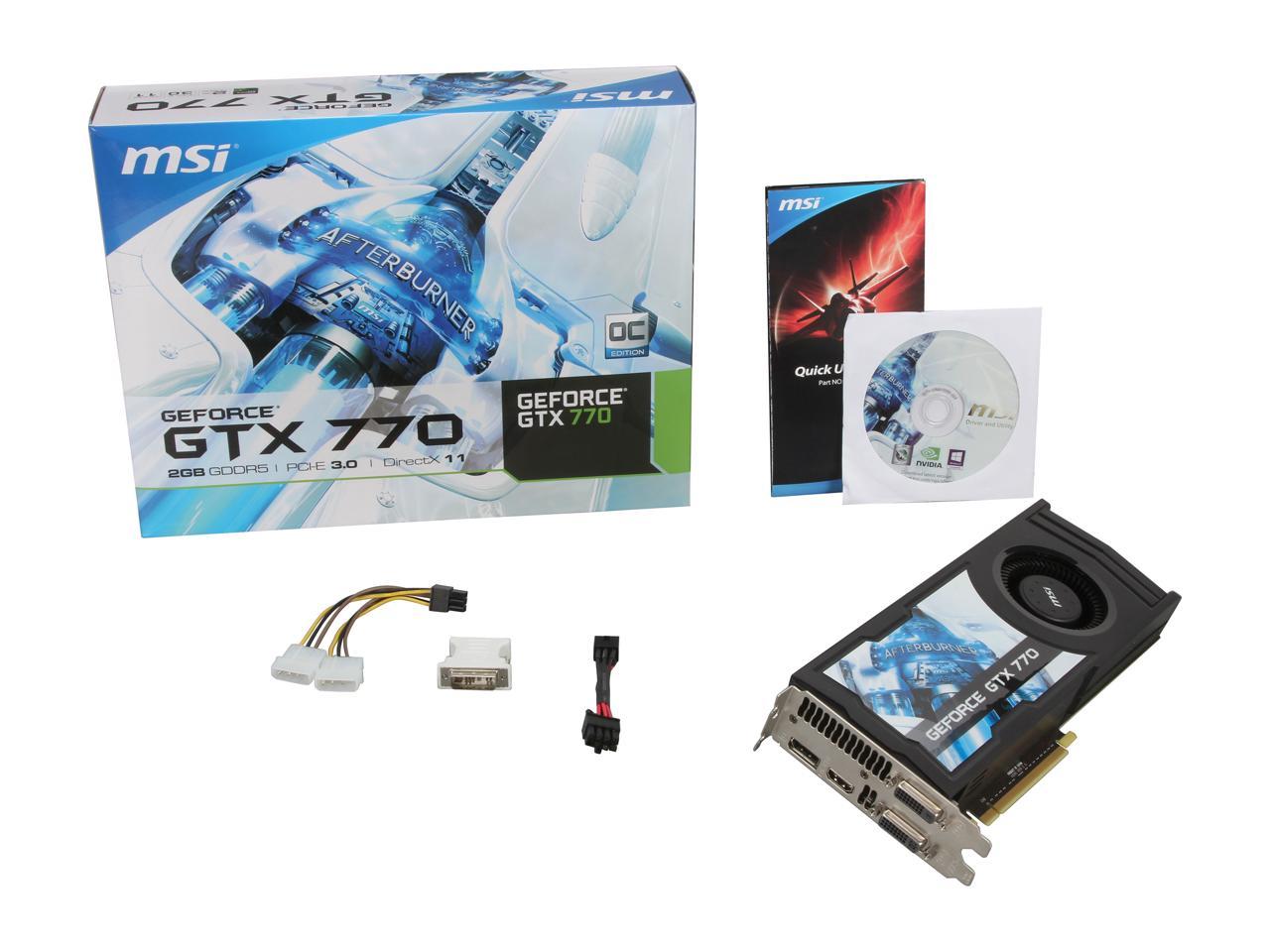 With 7Gpbs of memory – the fastest ever on a GPU – the MSI N770-2GD5/OC Video Card aims to deliver high speed and a super-smooth gaming experience. The powerful NVIDIA Kepler GPU GTX 770 of 1536 cores, and 2GB of GDDR5 graphics memory, work together to deliver awesome performance. All solid capacitors ensure an ultra-long 10-year lifetime, lower temperature, and higher efficiency. The afterburner overclocking utility makes it simple to adjust the graphic card's power for even more performance. And with support for NVIDIA 3D Vision Surround and a maximum of four display outputs on a single card, users will be able to enjoy the ultimate in gaming and multi-tasking.

Pros: Amazing card. Completely overkill for the game I usually play (WoW) but you never know when you are going to play something else that may need a little more power right? I have heard a lot of people complain about the noise of "blower" style cards, but this thing is waaaay quieter than the old Galaxy GTX 460 (non blower) that it replaced. I don't hear it at all because if it gets hot enough to spin it's impeller up, then the other fans in my case are already making even more noise. I have a tiny case (ncase M1) but this card is able to keep itself within normal operating temps even though my case is so small. It's just barely keeping up (mid to upper 70s), so I think I will eventually switch to a full cover water block sometime. I think that it's running hot because there is just no room in my case for the heat to dissapate. Speaking of full cover waterblocks...I have read online that this card uses the reference PCB design, so finding a full cover waterblock should be pretty easy. This is definitely another important "Pro" for many people. The Price! I got it when it went on sale for $299! and it came with a game. (I'm not interested in that game, but maybe I can sell it to someone who is)

Cons: It is operating pretty close to it's maximum temps, but I am not taking off an egg because I think it would be much cooler in a normal case with standard air flow. (my case is really small and does not have standard airflow)

Overall Review: When I first looked at the card, I didn't want to like it much. the front side looks plain, and a decal sticker on the shroud. This isn't the late 90's or early 2000's MSI. But none the less 300+ fps in a lot of low end games, and 70-80 in most high demand games. This cooler needs to be provided with fresh air, and needs you to not put your case against something. For me, I have it in a corsair air series 540 and it stays well under 70c. And as a hobby I work on indie games with crydev and udk. This card makes that and 3-d modeling pretty smooth without having to get a workstation GPU. All in all, this card is great for gamers, but if thats all you do and you only play at 1080 I recommend going with the 760. And this guy in a 4GB model for 2k resolution, 2 in SLI for multi-monitor.

Pros: This card is a powerful and reliable version of the GTX 770 reference card that boasts a small factory OC right out of the box. The MSI Afterburner software is a great tool for gaming. Having the GeForce Experience software is another added bonus. Initially I was tempted to spend the extra $ 20-30 for one of the other 770 models but after reading reviews and comparing the technical specs I returned to this card satisfied that it would perform as well or better than some of the more alluring models. I have been more than satisfied with my purchase. After 5 months with no problems I can't say I am anything but happy. It's a great card if you want solid power but can't afford to break the bank (too much).

Cons: I have a medium sized case and the card barely fit inside, do your homework before you buy and make sure it fits. When the fan is cranked up to the max it can be a bit loud especially if your rig is close by. I play with headphones so it isn't an issue. I rarely need to max out the fan but it depends what you use it for. Even in demanding games like Bio Shock Infinite or Assassins Creed Black Flag (Max Settings) The GPU temp never rose above 71 C which is a little hot but still acceptable; no reason to deduct an egg.

Cons: Didnt come with screws like my last GPU but it wasnt really a problem.

Pros: Card hasn't failed me yet. Lets hope it stays that way. This card has pulled through the unoptimization of Borderlands2 and PayDay2. Plays BF3 maxed out (1920x1080 with antialiasing) never dipping lower than 60fps. I've tried BF4(Don't hate, just some mainstream games laying around), The card can run it maxed out at 60fps. Overall this card was a great buy. Don't be shy to buy one. Never bought from MSI before, they now have a new buyer.

Cons: None yet. Could say the blower is loud like most people, but cooling is cooling. Gotta deal with it.

Pros: No issues so far running some of the newest games out (Rome 2 Total War, XCom the Bureau, both of the highest possible settings). I was a little worried about temperature but that is more of an issue with my case than with the card, the highest I have seen so far is 80c which is acceptable.

Overall Review: So far it has done a great job

Overall Review: Overall it's a great card for the $200-230 range. Probably the best atm. I bought it as an alternative to the GTX 970 due to a lack of availability at the time. Figured I might as well save $100 while I was at it since it wasn't supposed to be a long term card. I think I'll keep it a couple years anyways though, runs everything silky smooth at 1920x1080.

Pros: Solid card at a good value! (Purchased mine at a discount and included Borderlands 2 Prequel) 2 Gig DDR5 on-board memory and fast processing power that can handle most games on ultra settings. Easy Nvidia Driver support and downloads. SLI Support