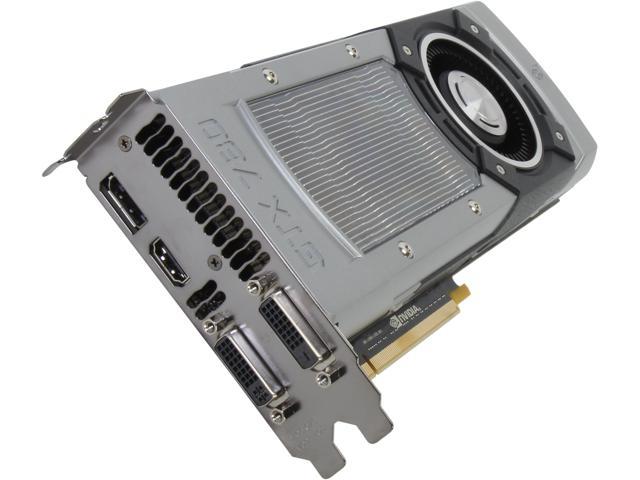 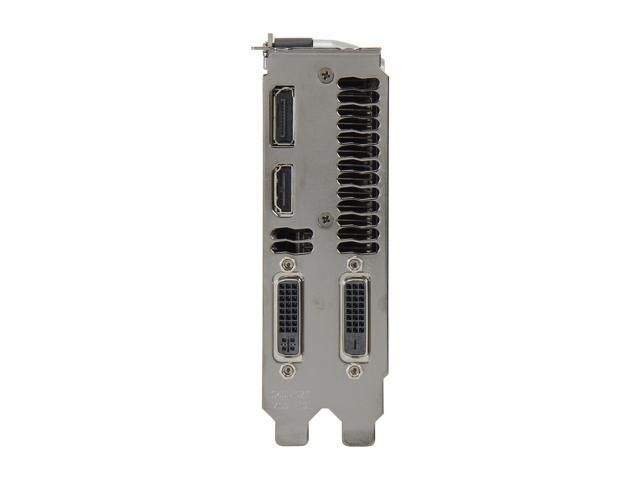 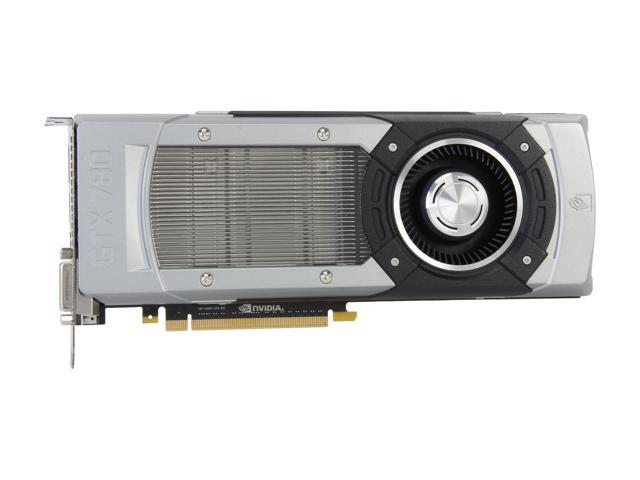 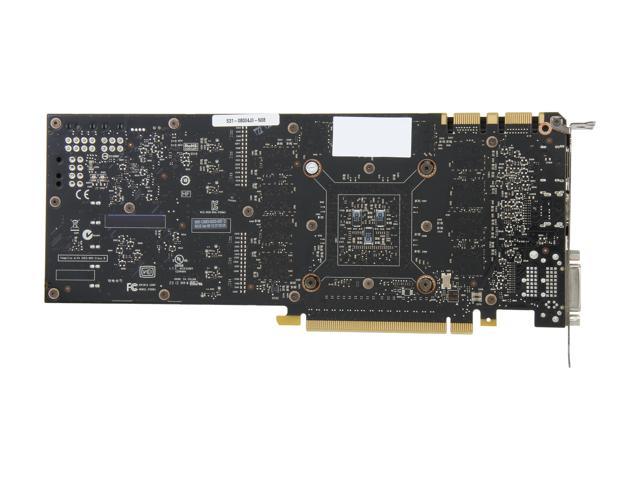 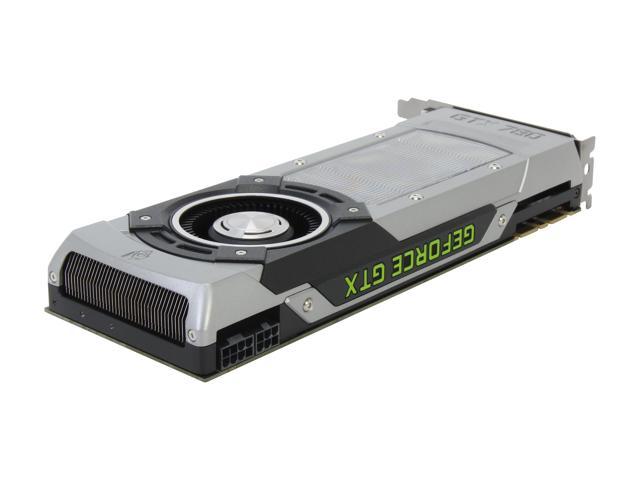 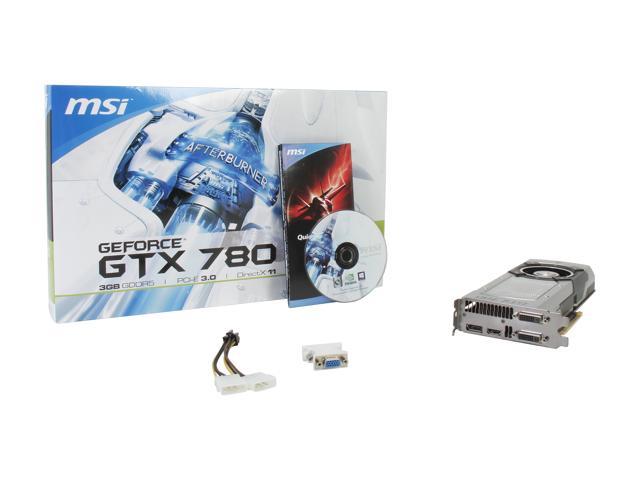 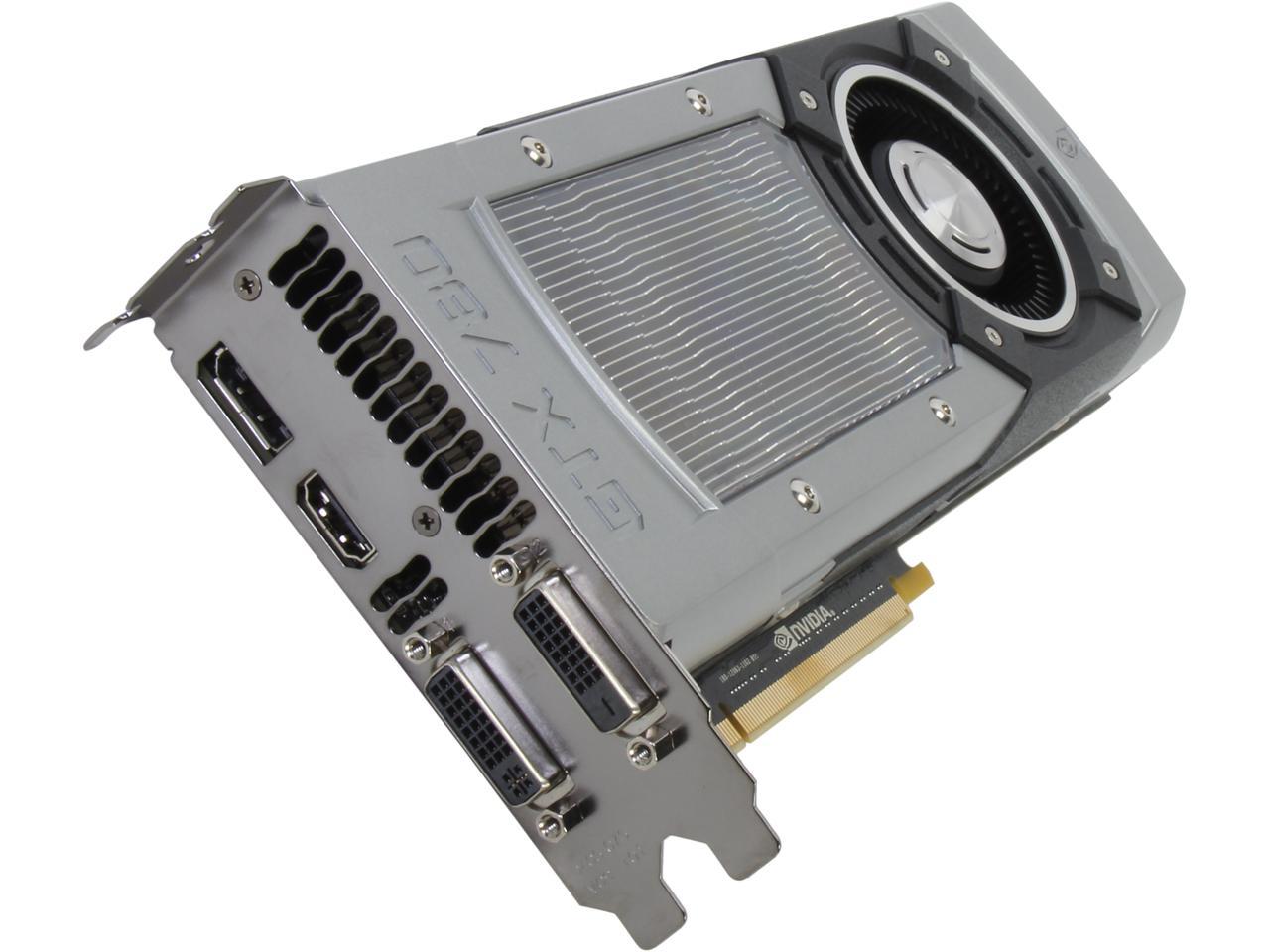 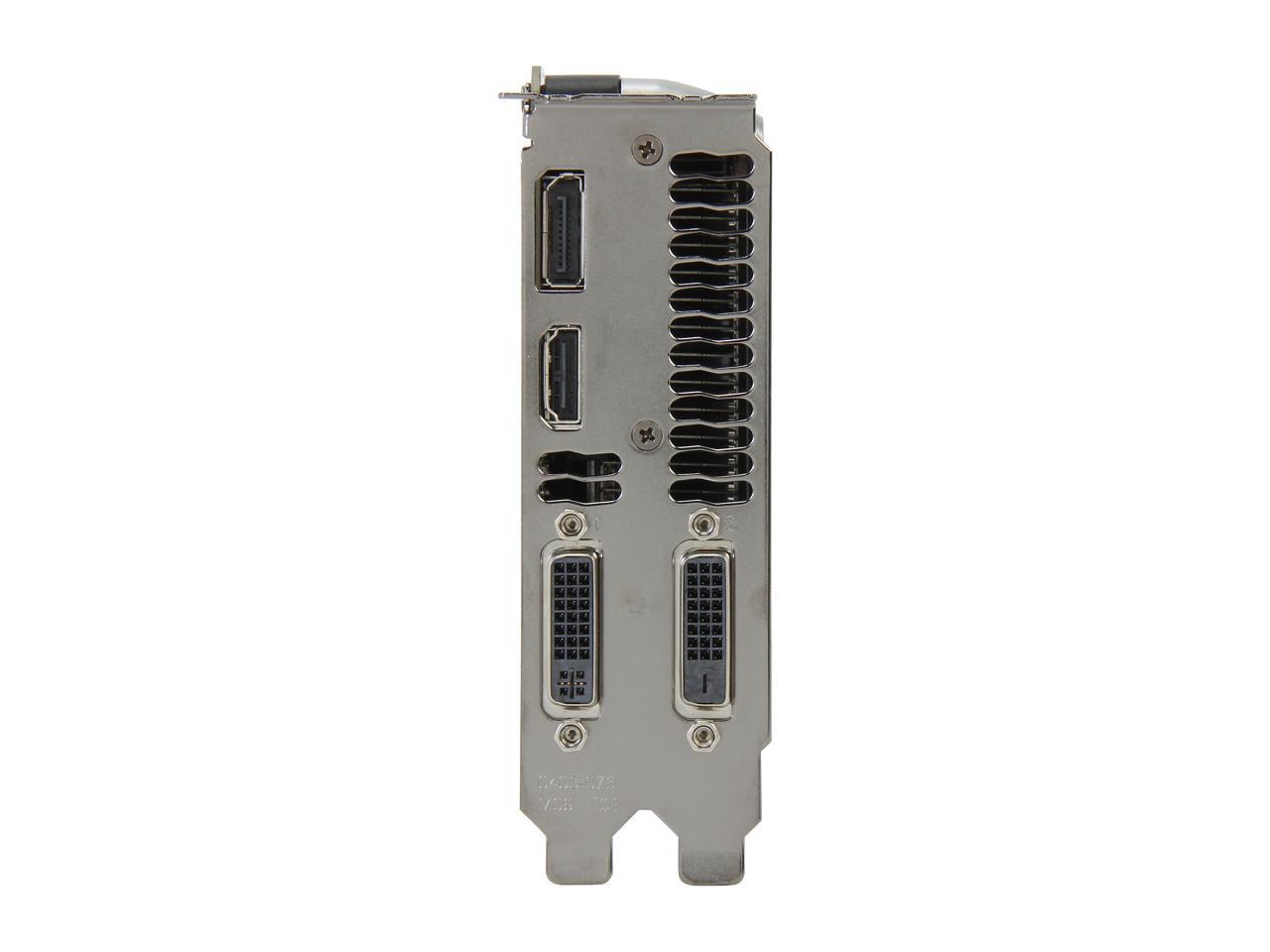 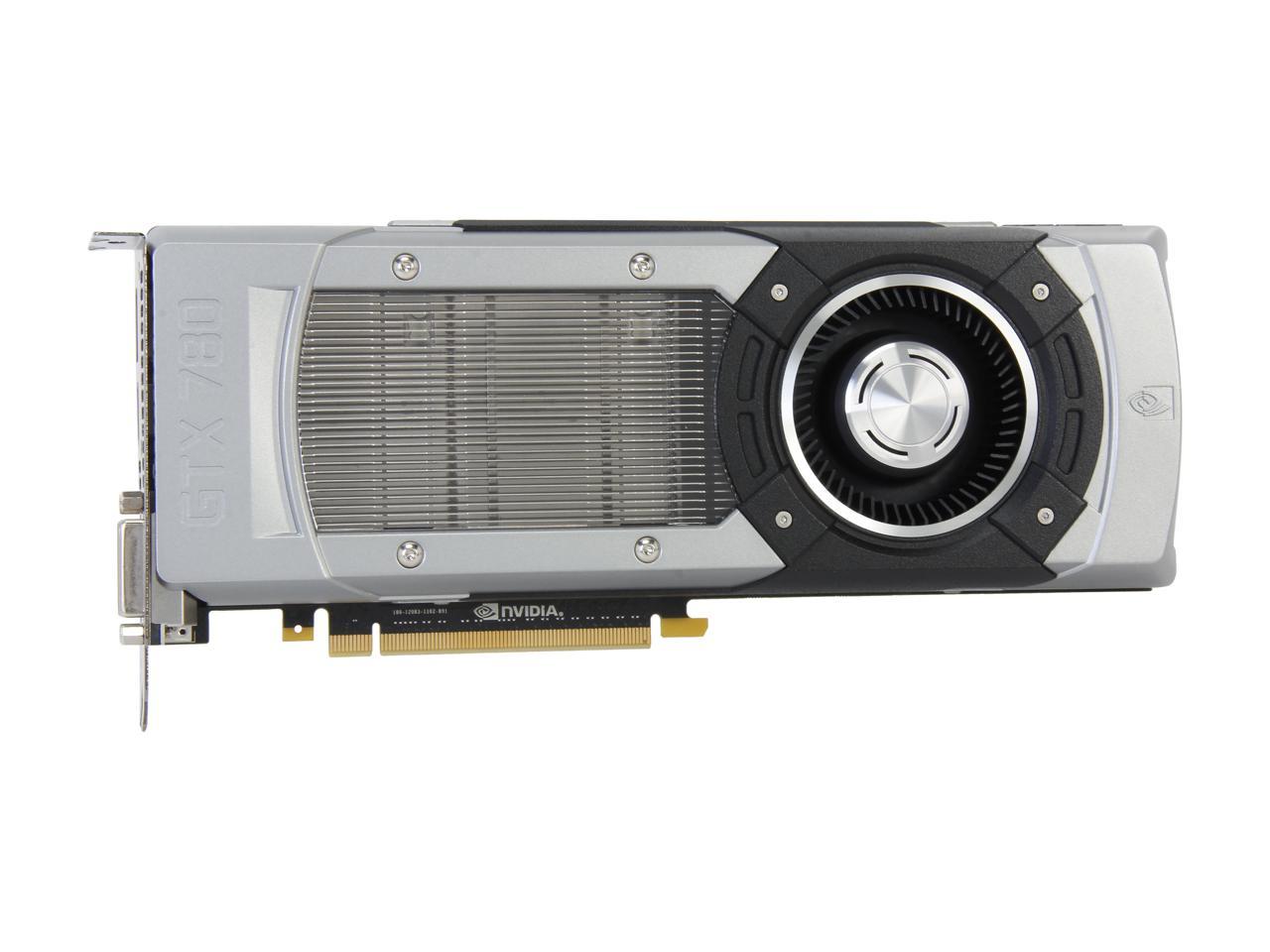 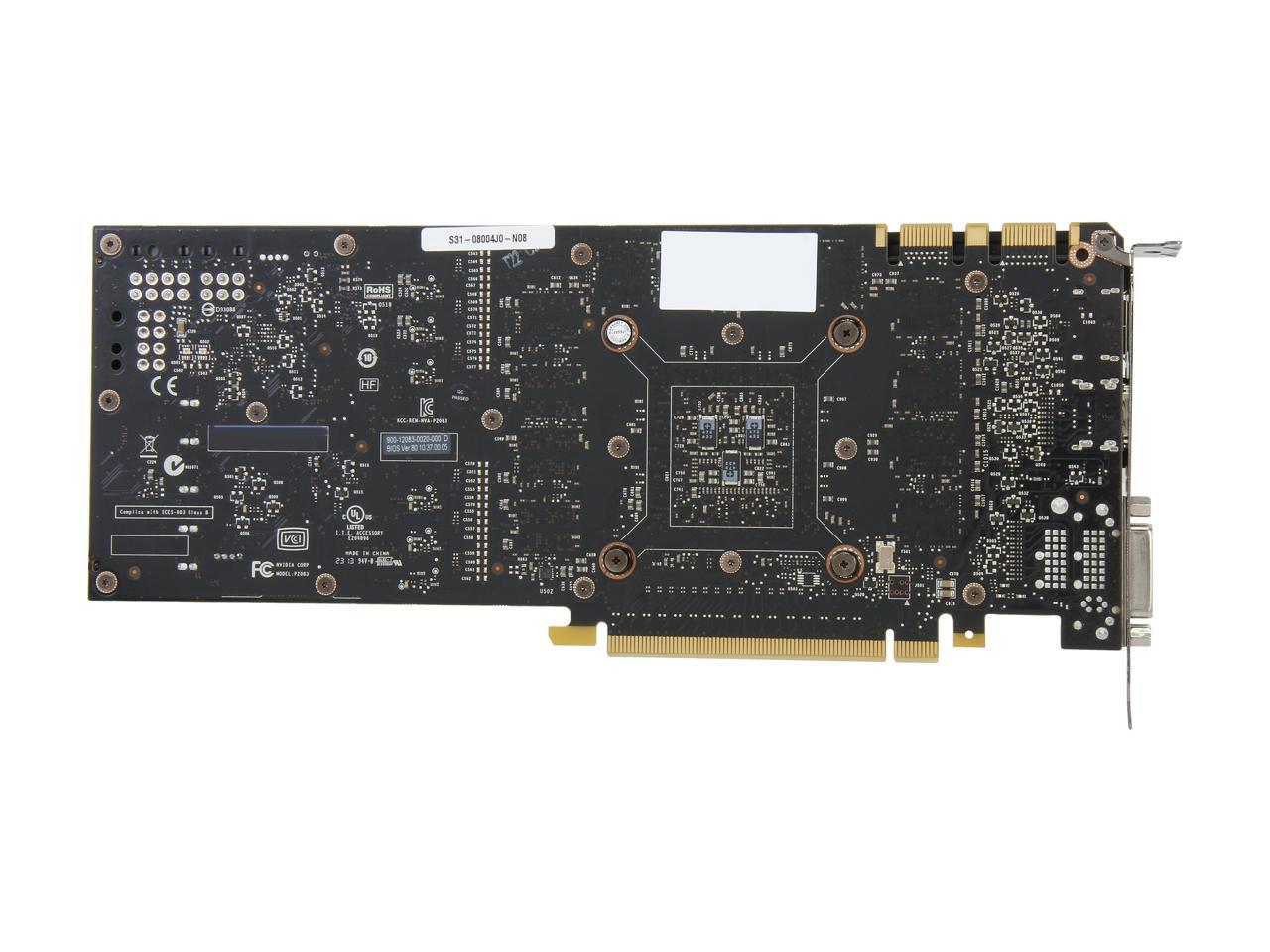 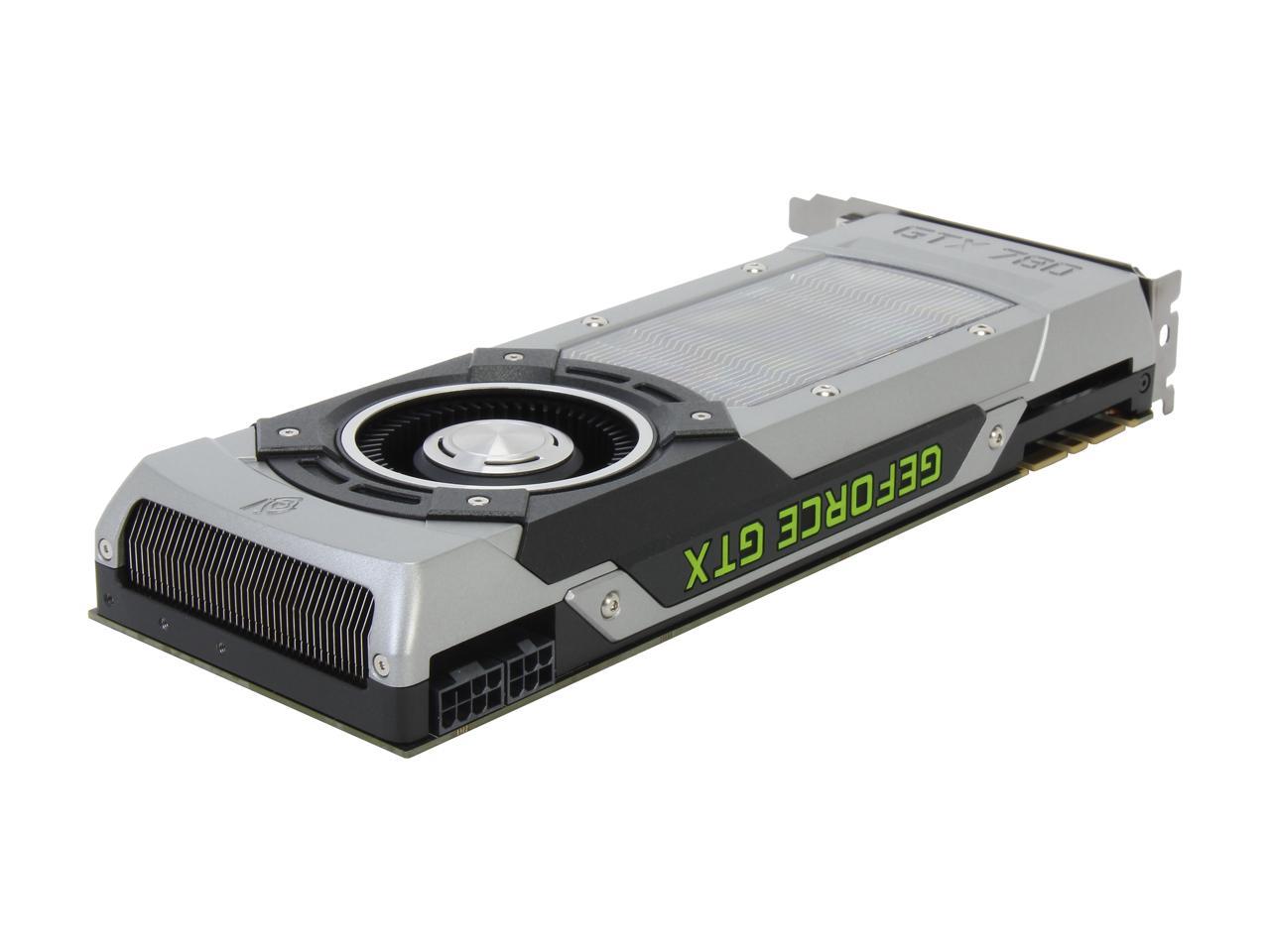 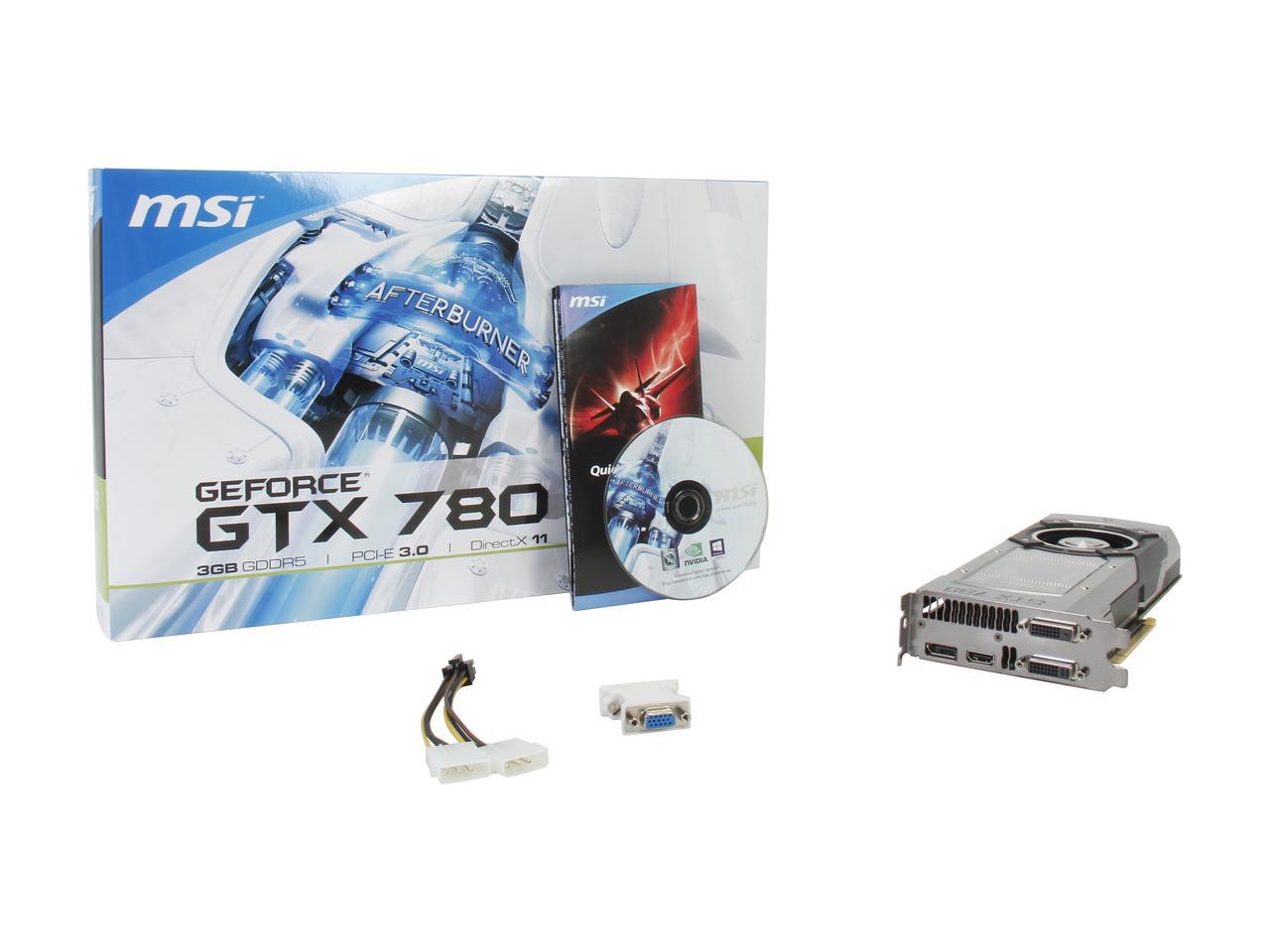 Your gaming is not the same with the MSI N780-3GD5 graphics card.

Based on the latest evolution of NVIDIA GPU - GTX 780, this card is built around 2304 CUDA cores with a gigantic 3GB/384bit GDDR5 memory. It produces amazingly beautiful graphics and lifelike environmental interaction in the hottest DirectX 11 game titles. You'll enjoy a new level of realism in your favorite FPS, RTS, MMORPG and RACING games. The MSI-exclusive Afterburner utility enables you to extract more performance by tuning vital GPU parameters. An array of advanced NVIDIA technology — including GPU BOOST 2.0, NVIDIA Adaptive V-Sync, NVIDIA 3D Vision Surround, and NVIDIA PhysX — offers you more than one way to elevate your gaming experience.

Overall Review: I bought this because Games keep getting more and more stressful on the cards ( I hate that) and seeing as I run a 2560x1440 monitor I was having to run 680 on sli and I hate messing with sli and crossfire but that is just me. I didn't run a lot of tests but I have loaded many games and this thing is quieter than my 680's and gives me the performance I require for single card use and settings I like. If you are looking for strait fps you could spend about the same on a crossfire setup or sli and get more for close to same price but if you like single card solution this seams great or the Titan. My system. MSI x79A-GD45,I7-3930k@4.6ghz 24/7 H100 with 4 Noctura fans, push pull 16gb G.Skill 2400 memory running at 2133 8-10-9 1.65v 1000 watt ps,bunch of ssds all tucked in a cosmos s case My only true fps test was Metro last light, results below and I tested again to verify fps highs with physx on Test settings: dx11,2560x1440,texture filter 4x,motion blur low,no ssaa,tesselation very high,no physx. Average frame rate,47.00,Max 94.42,Minimum 10.49 Next test was with physx on and texture filter 16x, all the rest stayed the same. Results: Average 30.50,Max 146.37,Low 4.29 running either MSI afterburner or EVGA precision x my card never went over 71c at 72% fan speed. My case is very well cooled by Cougar and Noctura fans as I hate fan noise with a passion.

Cons: When underload you can sightly hear the fan running but after a few seconds it subsides back to silent operation. Also the price is a bit high, but the performance makes up for it.

Overall Review: I'm upgrading from a entry level 6650 with 512mb of V-RAM, So before this I never got anything above 25fps on lowest settings at 1600 x 900. So It's great to play games at amazing fps with incredible smoothness. I'm also using this with a Core i7 4770K at 3.5Ghz

Pros: Primarily use the card for gaming, with a little bit of programming on the side... Game wise, it just destroys everything I throw at it, this card replaced my HD 7850. I will update the review in the future after I have the card powering 3 monitors, well see how that works out :) But once again, very impressed!

Pros: More RAM than my last gtx 460 Powered my new 1440p screen perfectly Can max any game Based on Titan Before my dps would drop in World of Warcraft and tomb raider but not anymore.

Pros: awesome card with excellent overclocking capabilities as this card can score up to x5618 3dmark 11 when overclocked which is 600 points higher than the gtx titan simply because of the one less smx unit the gtx 780 doesnt hit the power target as fast hence allowing higher overclocks which allow this card to easily surpass the gtx titan for only 649.00 and its butter smooth

Cons: the cons are as follows i bought this card on launch day and was getting alot of afrtifacts and issues with or without the card being overclocked and that was a bit upsetting but thats life sometimes chips are faulty but that doesnt mean this card deserves to lose any eggs because the card is awesome the best card ever made and hopefully my replacement that was shipped out today thanks to the awesome newegg customer service will work as advertised without any issues with artifacts in games and random black screen crashes and yes people my tech knowledge is very high i would classify it as ultra lol its def the card as my bios and motherboard drivers all that good stuff is up to date and hopefully this new one will be fine actually wait THIS NEW CARD WILL BE BETTER THAN FINE IT WILL BE A PLATINUM OVERCLOCKER ON BOTH CORE AND MEMORY WITH LOW VOLTAGE AND NO ARTIFACTS OR CRASHES :-)

Pros: Have 2 of them running in my system and they easily run anything and everything I can throw at them. I was able to squeeze even more power out of them with a slight overclock. Now they are at titan levels of performance and I am very happy with my purchase. Worth every penny. If you have the money, buy this card.

Pros: Upgraded from an AMD HD5850 1GB and couldn't be happier. Maxes many modern games I've played at 2560x1440. I'm liking GeForce Experience and the driver features. AMD's drivers have gotten better over the years but haven't reached nVidia's level. The fan is very quiet. I can't even hear it when I'm playing graphically intensive games at 1440p.

Cons: Price. I was hoping it would be closer to the $550 price point but after debating for a long time, I decided to get it.

Overall Review: Delivery guy left it on my apartment door step... Good thing I didn't stay late at work. I also like the LED logo on the side of the card, not that those types of things really matter though. Current setup: Intel i5-750 @ 3.6GHz MSI GeForce GTX 780 3GB ASUS P7P55D Deluxe 8 GB G.Skill DDR3-1600 Corsair HX750W Modular PSU