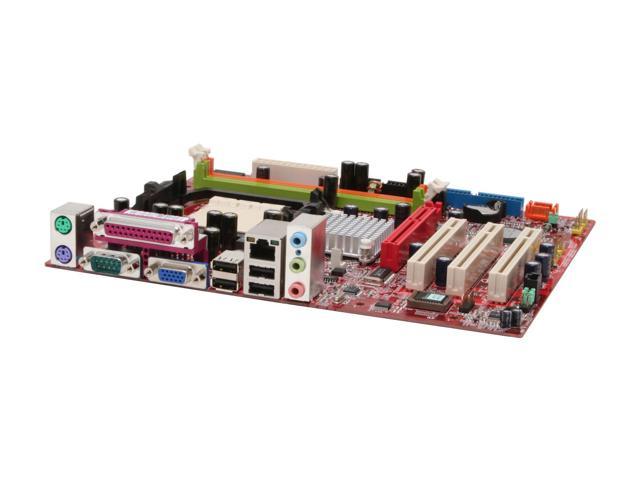 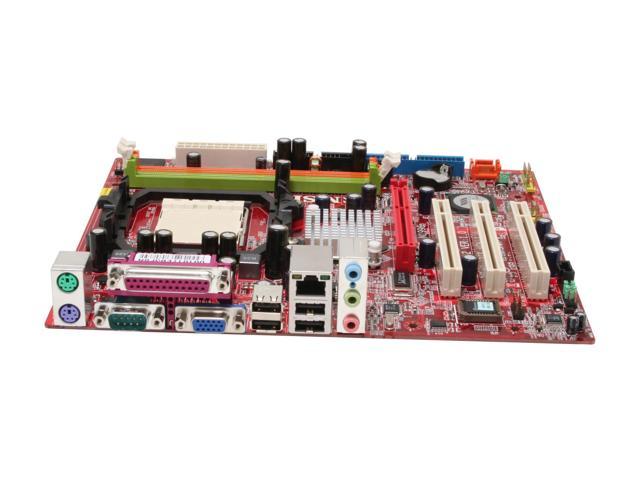 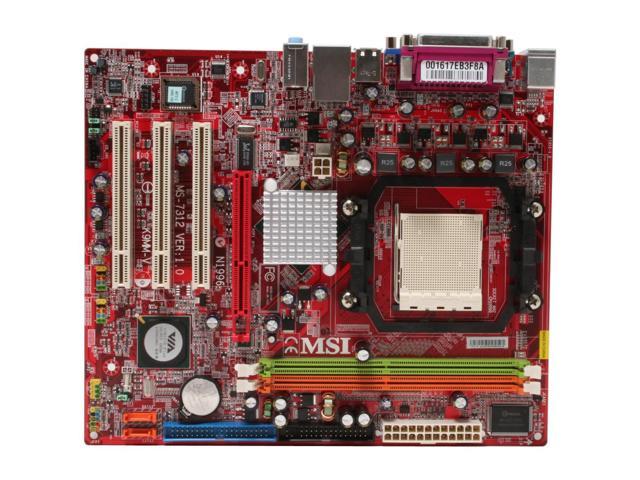 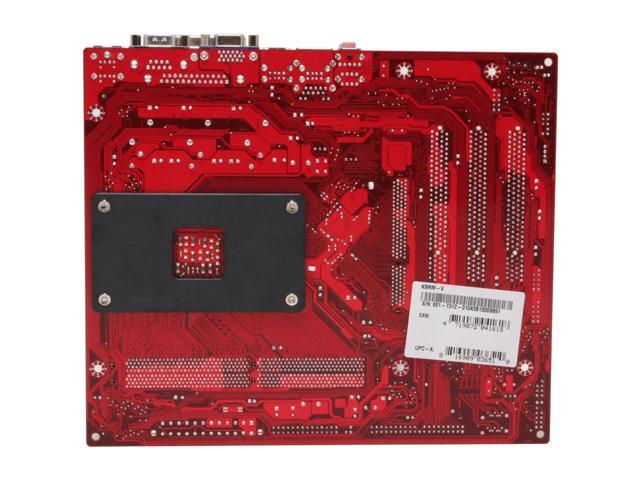 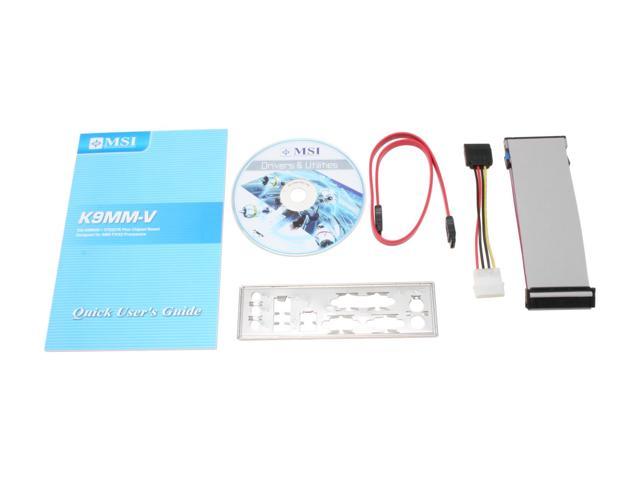 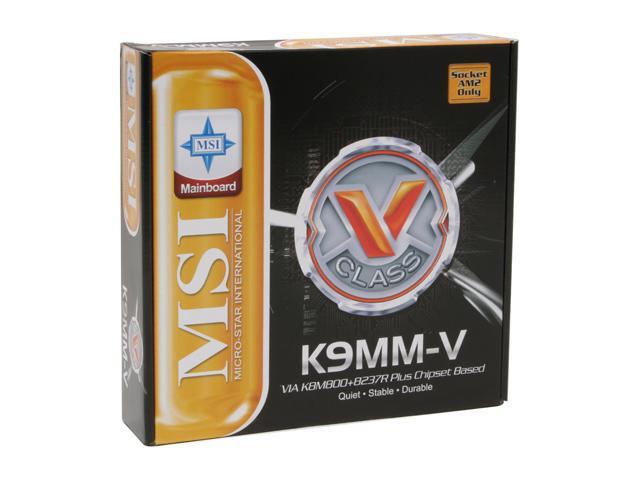 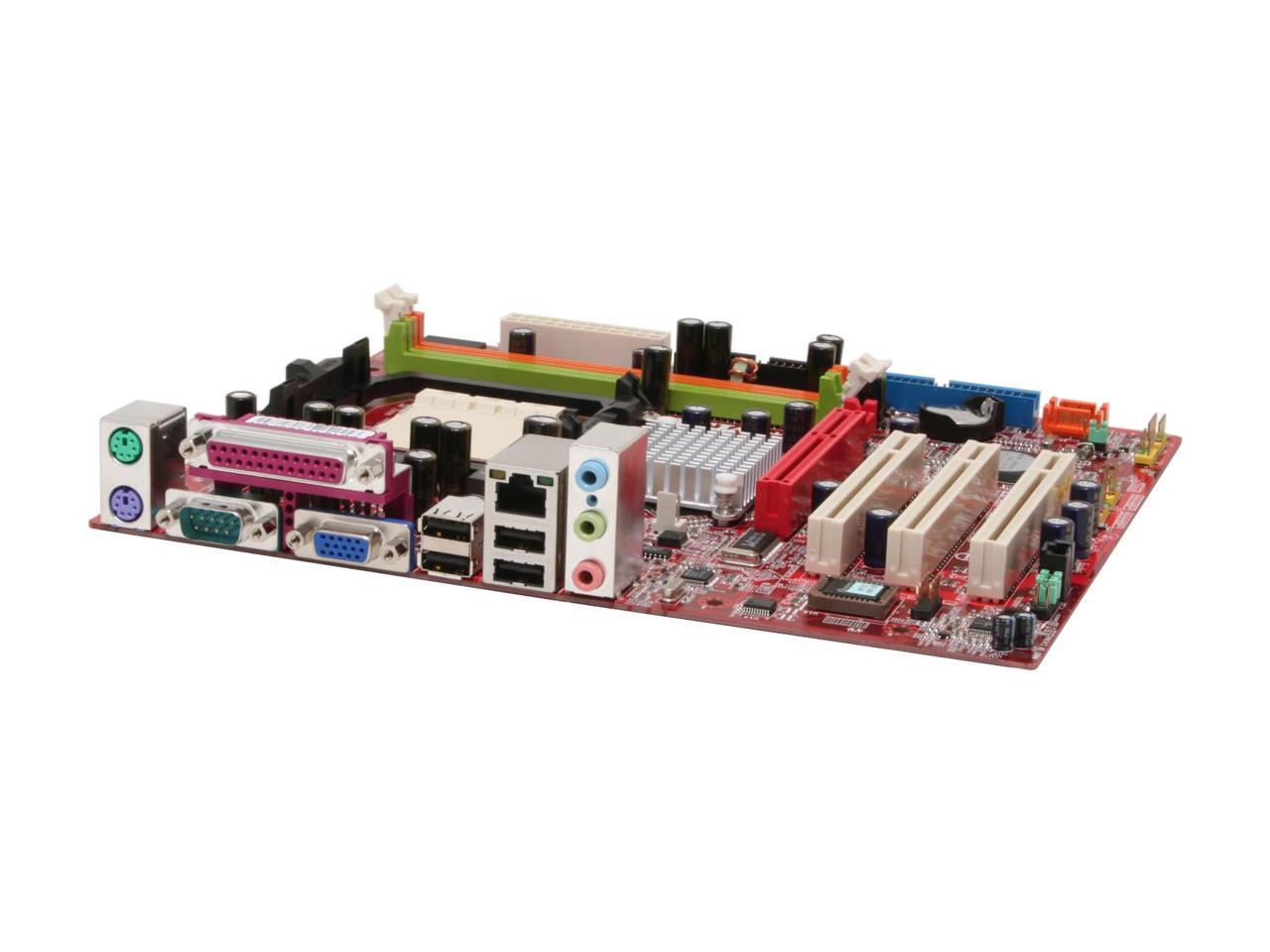 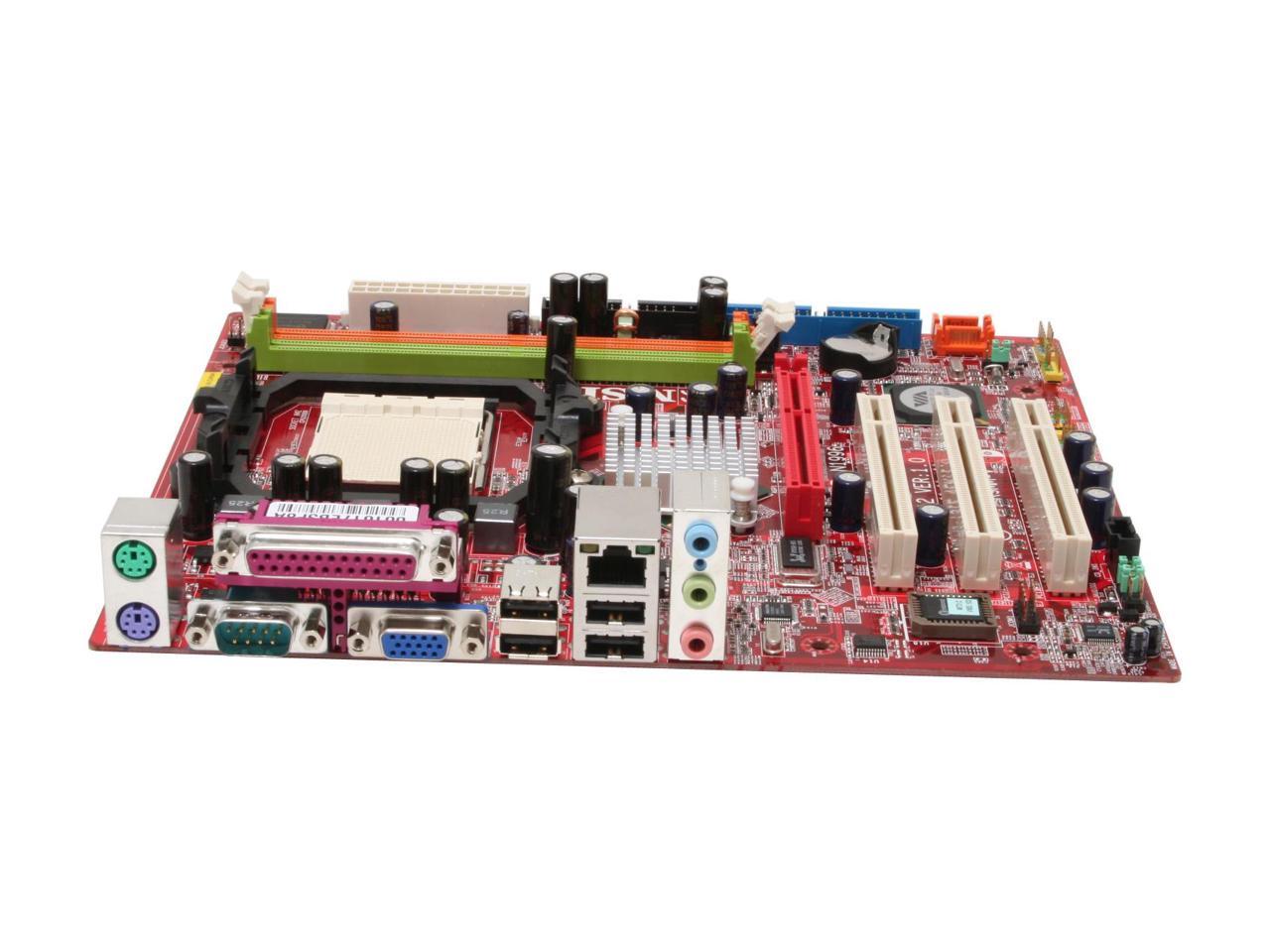 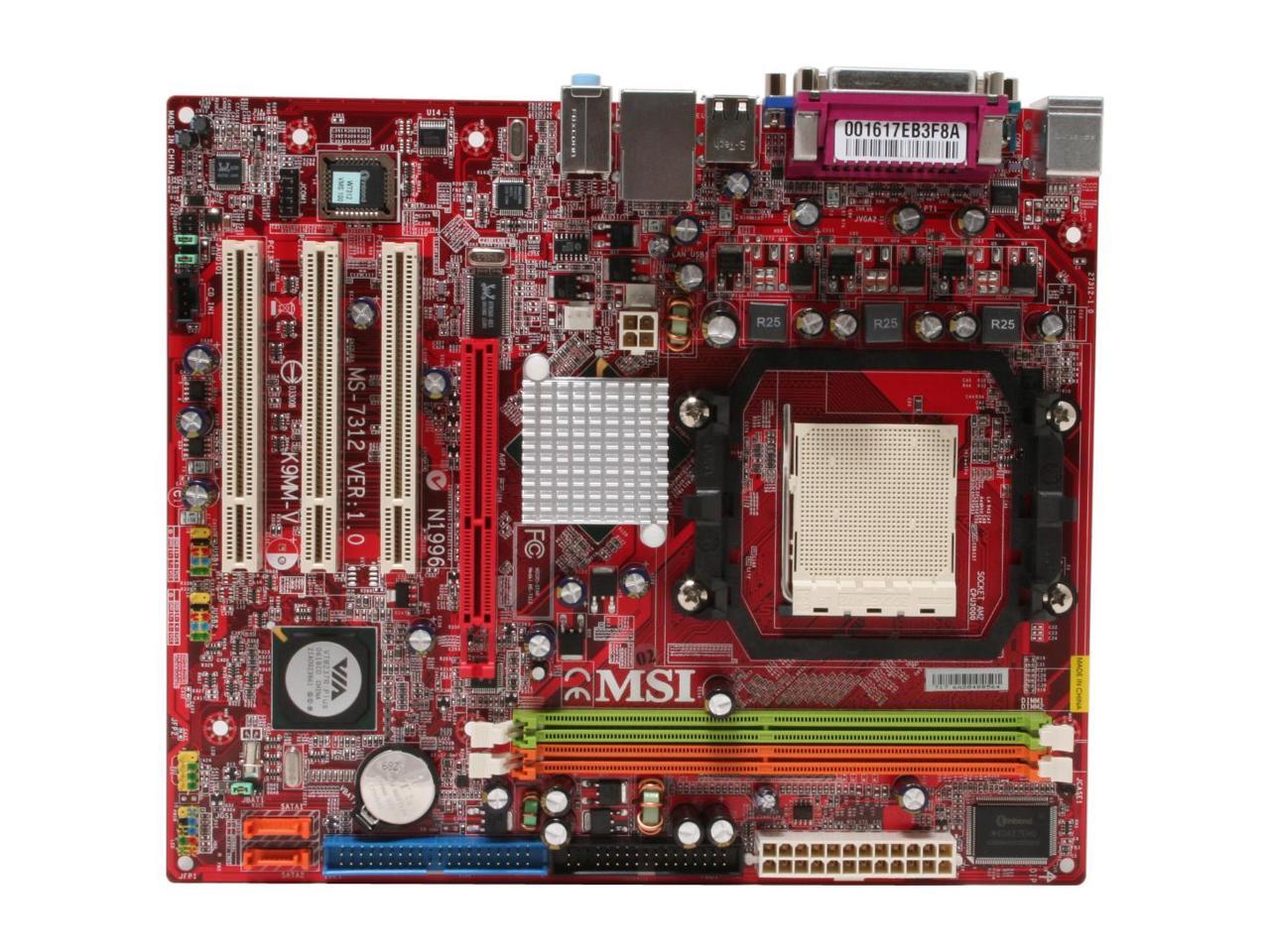 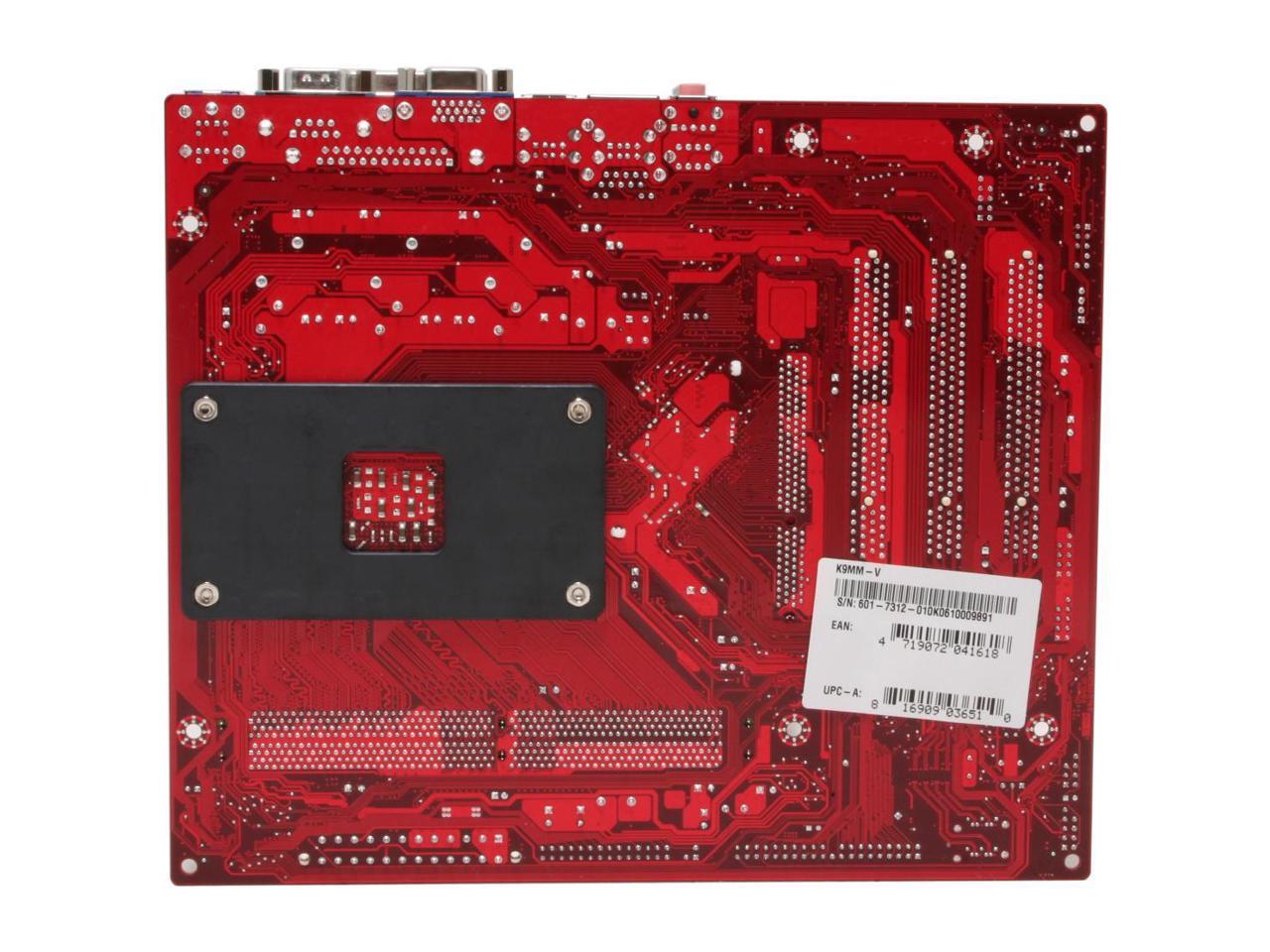 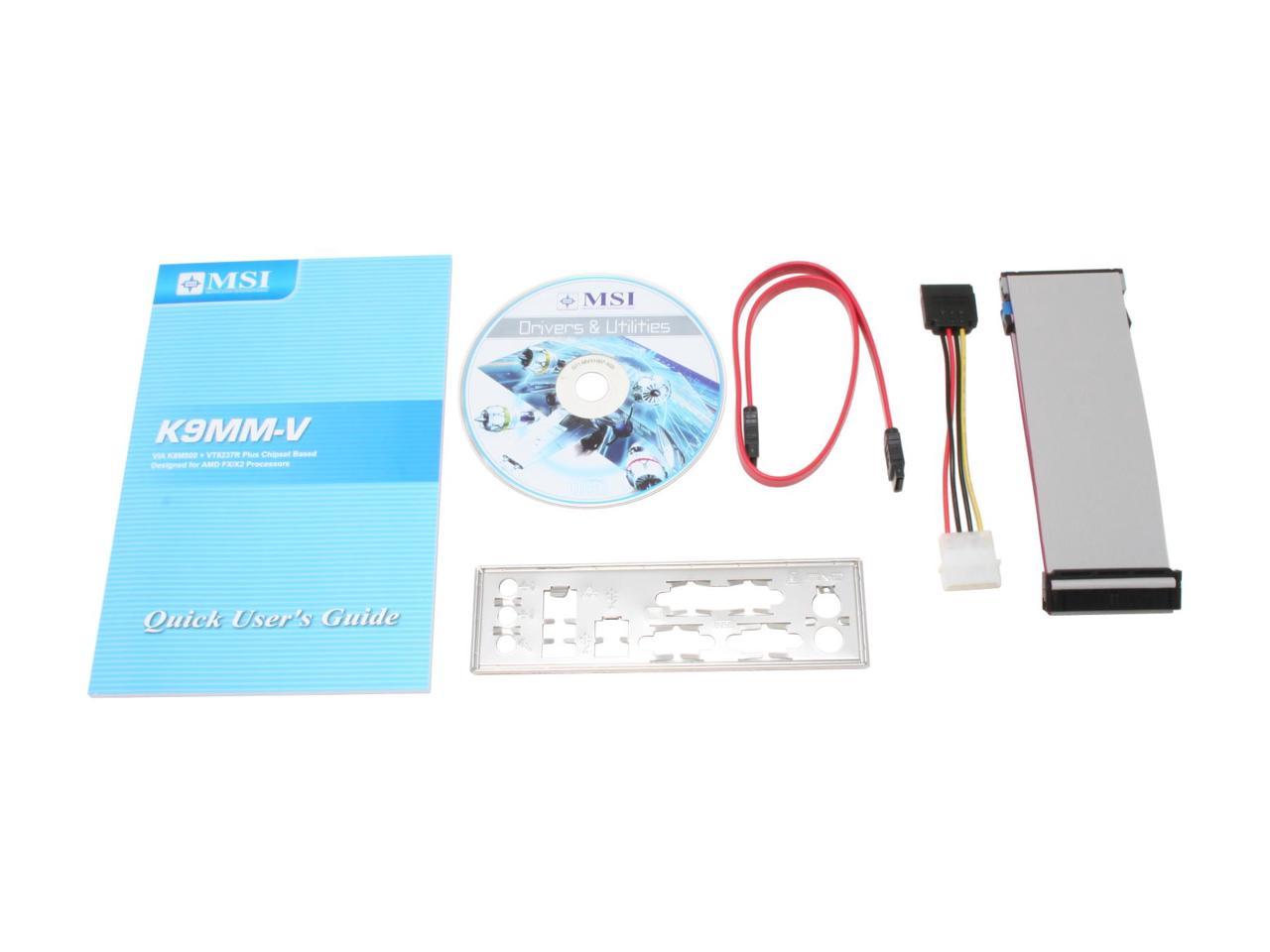 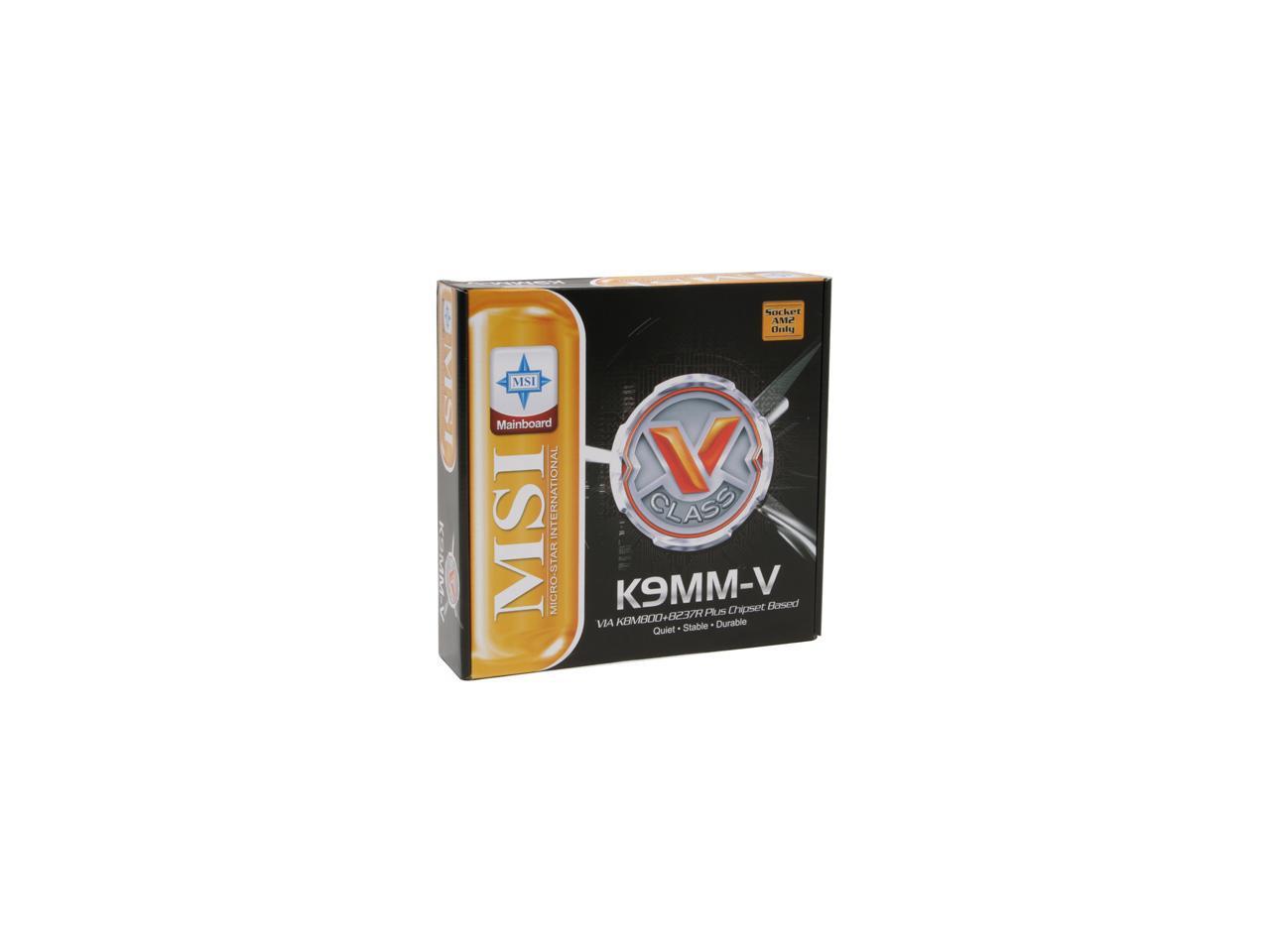 (232) Write a Review
OUT OF STOCK.
Overview
Specs
Reviews
A simple and inexpensive motherboard for the enthusiast or the first time builder, the MSI K9MM-V is a great starting point for anyone wanting to build a system or upgrade their motherboard. Designed with the small form factor case in mind, this motherboard will fit into most smaller desktop systems. Equipped with an AMD socket AM2, suitable for Athlon 64 processors, including the X2 and FX series, the K9MM-V is more than capable of handling anything you may want to run.
Using the VIA K8M800 chipset, the K9MM-V adds up to 2GB’s of DDR2 memory to give you powerful support for memory intensive applications. It also includes a 10/100 Ethernet port, onboard 5.1 channel sound, and 2 SATA ports. Add multiple hard drives to the system through those ports -- the K9MM-V supports RAID 0 and RAID 1.
It has multiple expansion slots, including one AGP slot for those older graphics cards, and three additional PCI slots. Build your ideal system: the MSI K9MM-V is a great start.

Learn more about the MSI K9MM-V

Pros: Great price for an AM2 mobo that will still support AGP for those of us who just recently bought good video cards (such as the Radeon x-series) and don't want to have wasted that money. Board also installs perfectly in standard ATX case and hooks up just fine to a 20-pin power supply (doesn't actually need an adapter - the pins are safety-designed so you can't hook it up incorrectly).

Cons: Took awhile to get booted into the O.S. The BIOS has a regular boot sequence setting (disk, CD, hard drives...), and then there is another setting for the order to check the hard drives for an O.S., so I left my O.S. drive at #2 in that sequence figuring it didn't matter. However, the mobo never checked that disk until I set it to #1, so just keep an eye out for this if you are running multiple disks.

Overall Review: One of VERY few choices left for those of us who need a decent dual-core processor but aren't ready to sacrifice our AGP cards to spend a bunch more for PCI-E. Also, this board maxes out at 2GB RAM, but I put 2GB in it, and it performs absolutely smoothly, so I don't think this will be an issue.

Overall Review: Went from amd xp 1900+ 1gb pc133 TO this board amd 3800+ ddr2 667 1gb DIdnt even have to redo the os. changed out the board cpu and ram and she updated no problems. Old board was sk11 via chipset. Had the latest via 4in1 installed befor the update.

Cons: MSI's USA website shows the board supports the Athlon 64 X2 3800+. BEWARE! As of 12/20/2006, the bios that ships with this board does NOT support the "Windsor" core Athlon 64 X2 3800+. Currently talking with MSI regarding exchange/etc. Apparently their "international" website correctly shows all supported CPU's as wells as CPU cores, and the "Windsor" 3800+ is NOT on the supported list.

Overall Review: Be carefull what "core" the X2 motherboards support. This one caught me by surprise.

Pros: Like others here, I got this since I already had an old high-end AGP video card that has been keeping up surprisingly well for how old it is. It's an ASUS AX800 Pro overclocked (520/550) with 2.6GHz Black Edition dual core and 2Gigs Corsair XMS RAM. I DO have to reduce resolution to 768 in order to run Crysis or Gears of War PC fairly smoothly at medium settings (chalky but "playable" at high), well...that's a heck of a lot better than I expected. No miracles obviously but it's a pleasant perk for a two hundred dollar renovation. The agenda is to drag it out long enough for 45nm black edition Phenoms and I'll be crossfiring a couple highend cards, then this will get relegated to media tasks.

Cons: Watch those memory voltages in the BIOS...doesn't go higher than 2.0 volts. I was lucky...the XMS ram I got prefers 2.1 and people report system failures at 1.9, so this was just barely stable. BIOS doesn't offer tuning for memory timings or much anything else either. Not too big a deal since the videocard will still be the performance bottleneck, but I'd prefer to have a few more of these features anyway. I think I've been lucky not to deal with the compatibility issues others seem to have had. Obviously it's a risk.

Overall Review: Not that AGP should continue to be fully supported, but come on with all the boards out there and the number of AGP cards available you'd think more companies would make minimalist offerings for vintage interfaces like this. Normally I'd really give this thing 4 eggs...but you gotta bump it up for MSI offering utility support for an old interface.

Cons: 1) The board has very spotty legacy USB support. Would lock up on my Microsoft Intellimouse and not get past POST. Had to use the USB/PS2 converter. Disable the legacy USB support in the BIOS. 2) Board didn't recognize Brisbane 5200+. Required a reflash. Reflash didn't work with windows version, had to use the old DOS / floppy solution. Be sure you still have a floppy drive. 3) Only supports 1.8 to 2.0 volt memory and does not detect proper voltage (defaults to 1.9). I am currently under my recommended 2.1 volts. This caused random lockups until I boosted it to 2.0.

Overall Review: DO NOT BUY THIS IF THIS IS YOUR FIRST UPGRADE OR ARE A NOVICE!!! I had to pull every trick I knew and some I didn't to get the stable system I'm working with now and I've been doing this for about 15 years. This board has some embarrassing issues that MSI should have fixed. On the upside everything now works as advertised. It just shouldn't have been such a PITA.

Overall Review: Should have gone ahead & gone with PCI express. This is what happens when your cheap I suppose.

Pros: It works. Does everything it claims to do, and the price is right.

Cons: It works, as long as you have to fortitude and know how to bebug the thing. First problem, memory was inserted, memory clips where clipped and in place, no RAM detected. Tried different brand of memory, same thing. Eventually, I pushed down REALLY hard on the memory, and I guess it went down a little further (although I can't tell). Now, it detects the memory. If the memory clips are in place, it should be down far enough to detect the memory. Also, you shouldn't have to press down that hard. Second problem, memory test on boot up freezes computer. Can't get into BIOS. Unplug USB mouse, and it boots up fine. Talked to MSI. Unplug USB devices, go into BIOS, and turn off USB Emulation. Any other setting causes it to freeze on boot up with a USB mouse (and possibly any other device) plugged in. Finally, I have an older Sound Blaster Live! 5.1 plugged into one of the PCI slots. It gets detected, but it can't install it. Downloaded drivers from Sound Blaster's website, and it can't find it.

Overall Review: Shoulnd't have to work this hard to get something to work, but there aren't a lot of options, and at least it does eventually work.

Pros: it works ,not as great as I expected - and not worth the troubles to keep agp8x.

Overall Review: trouble with big graphics card as the IDE is in the way. overall poor bios settings. IMO was not worth keeping old radeon9800. RMAing for an ASUS and upgrading to PCI-e.