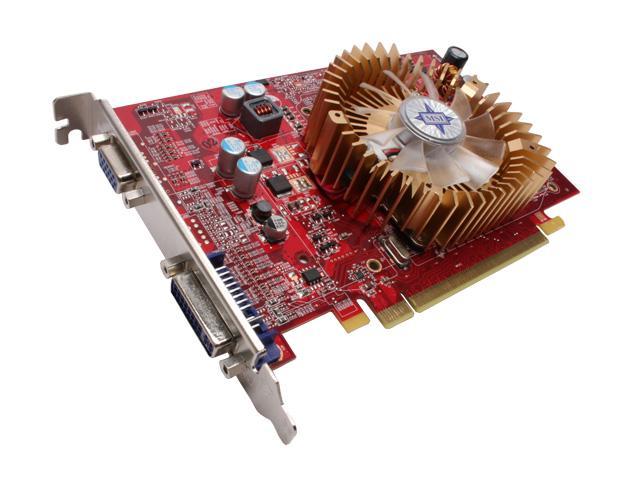 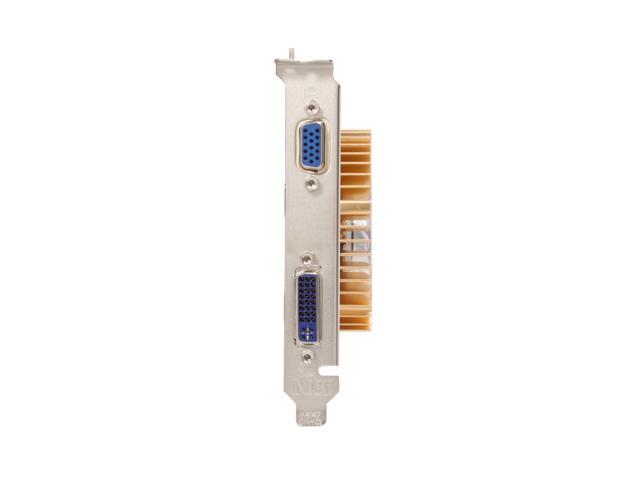 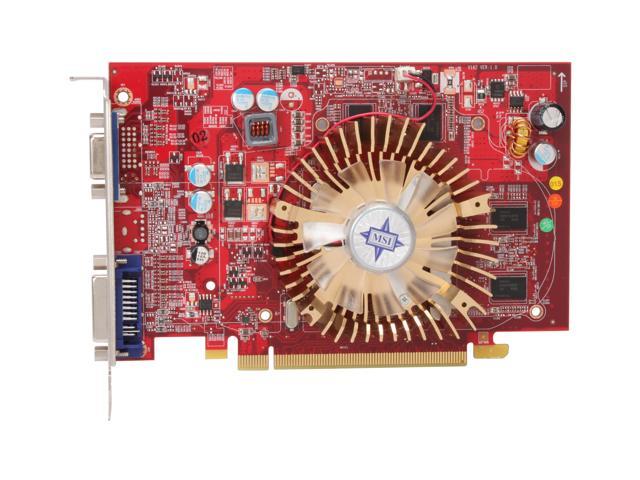 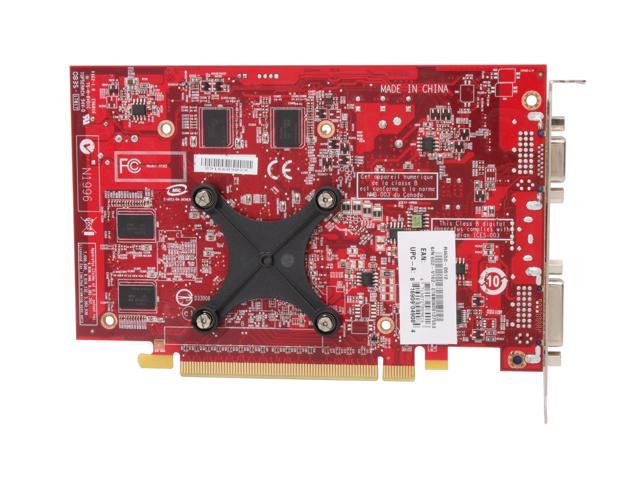 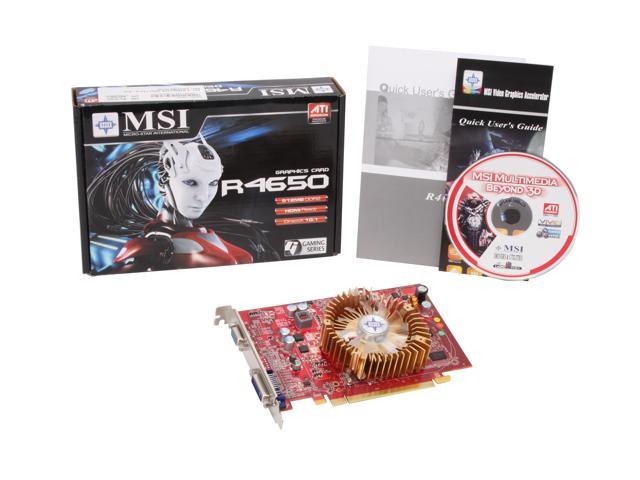 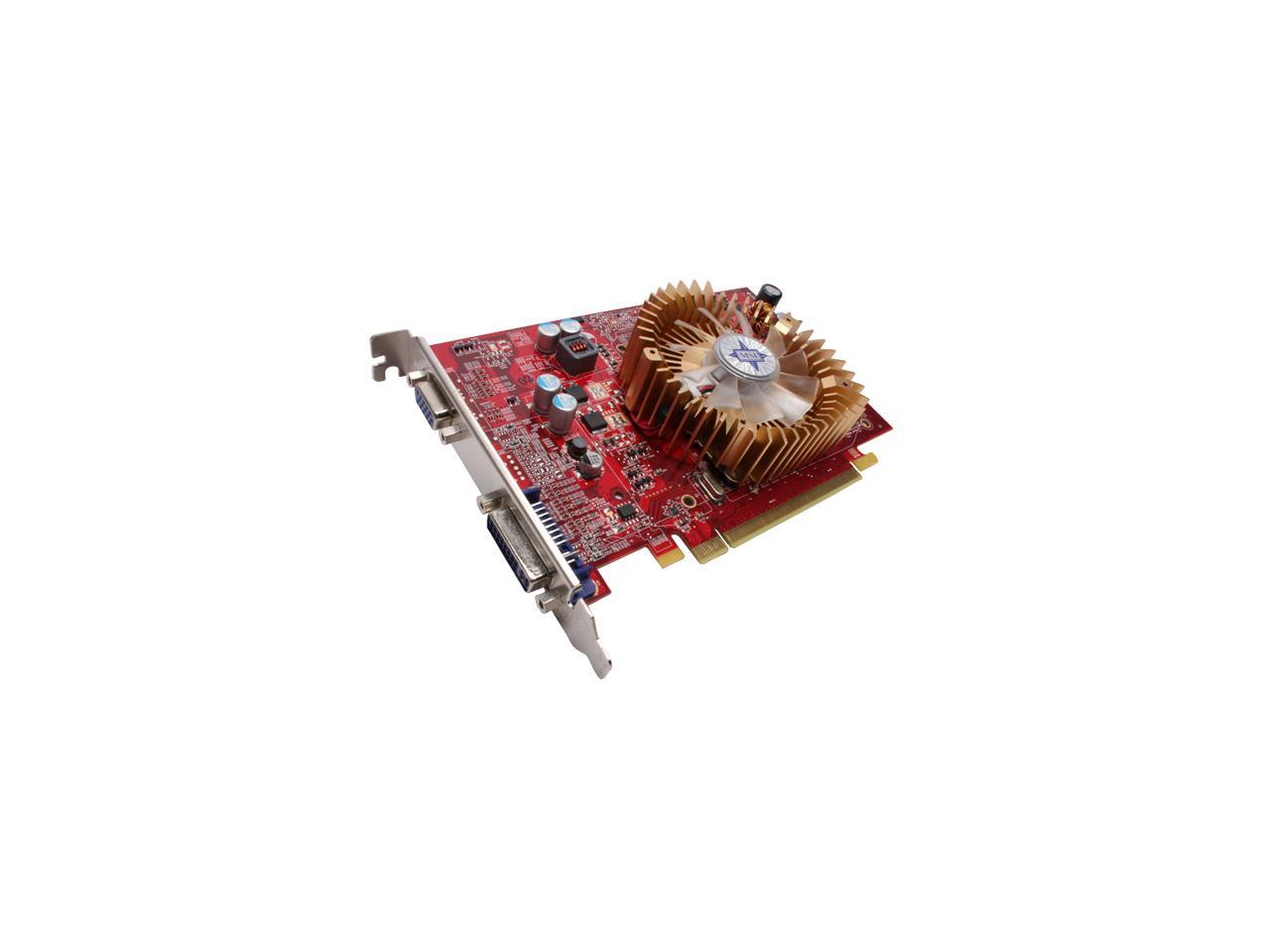 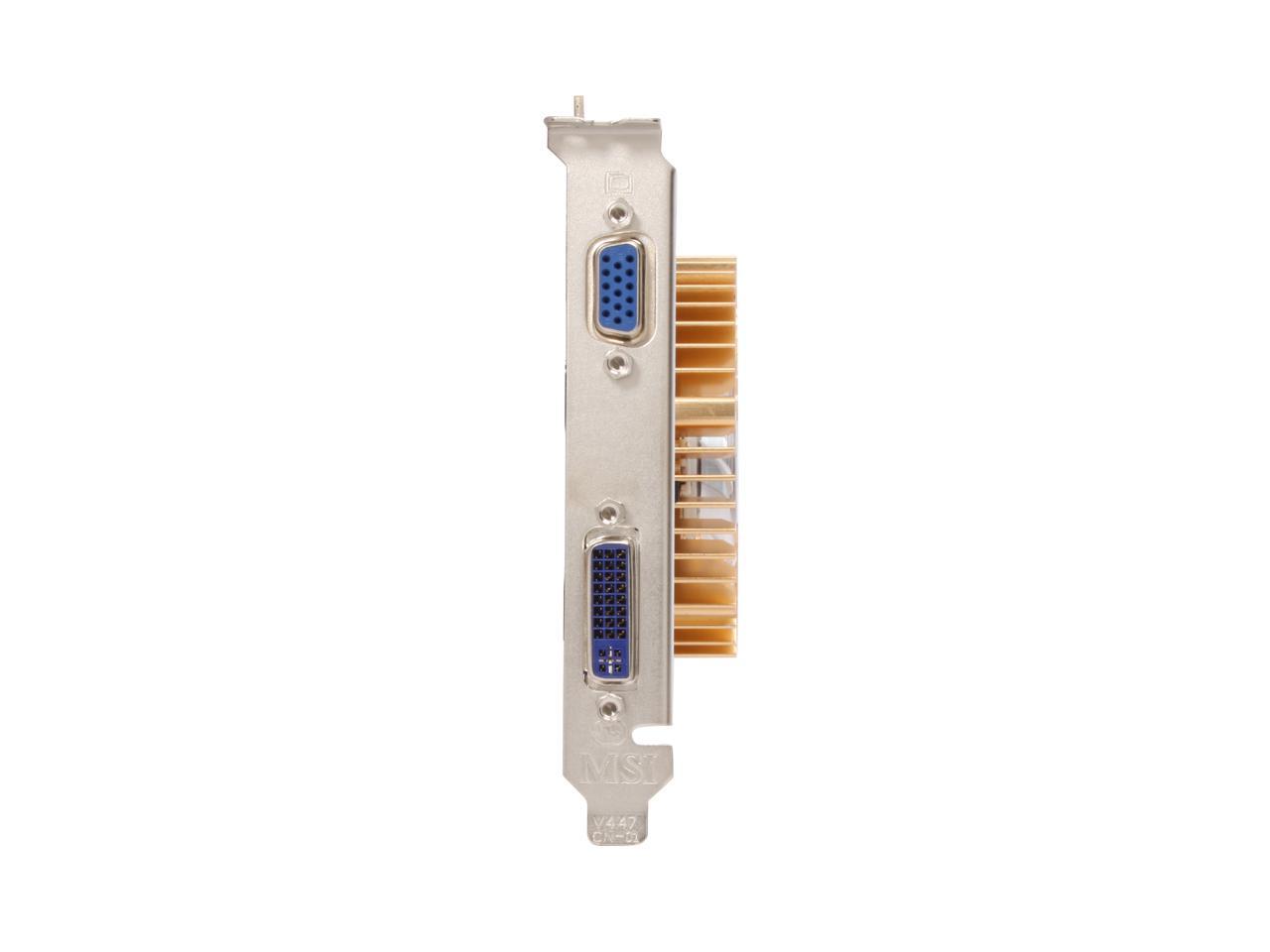 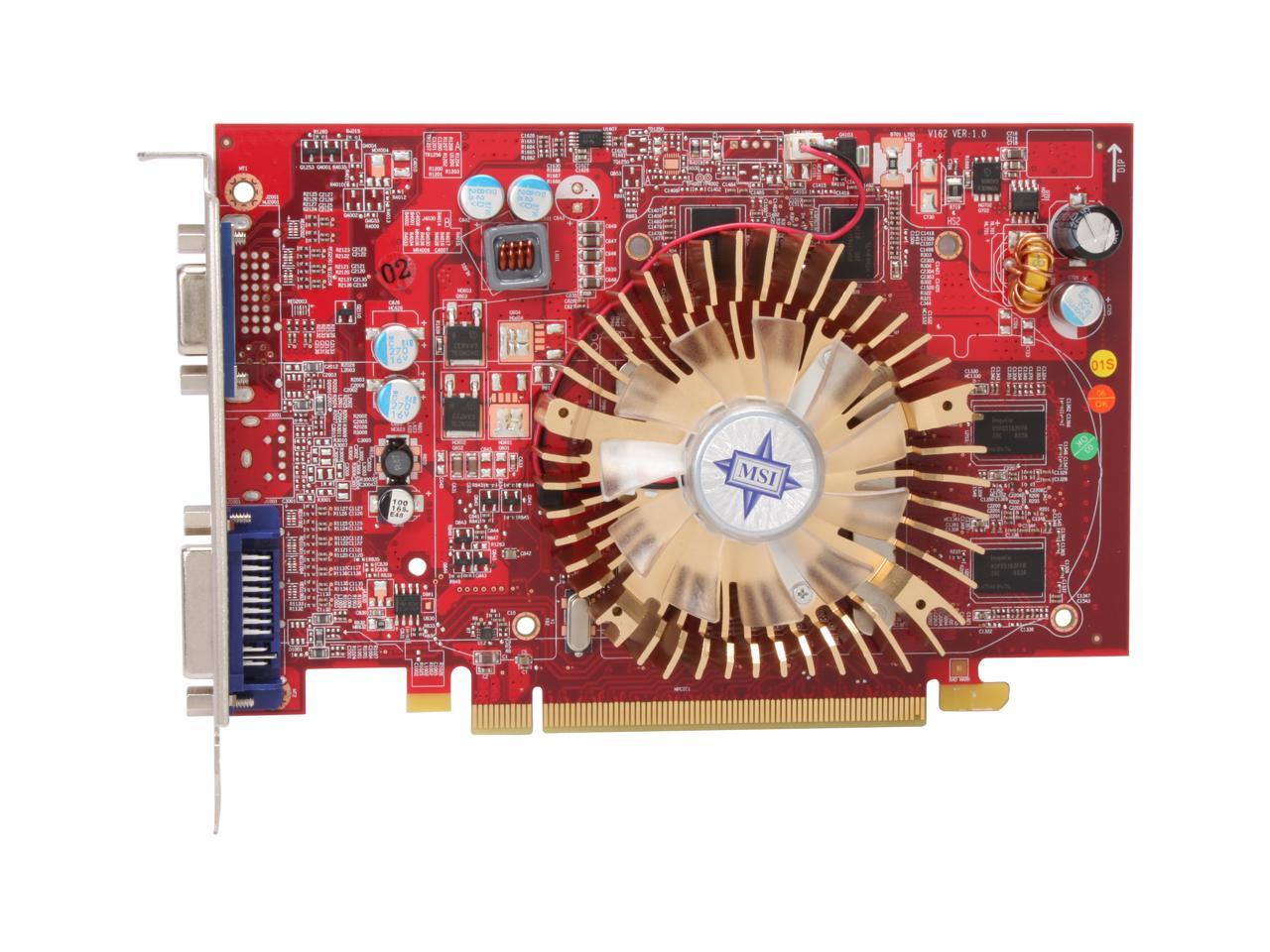 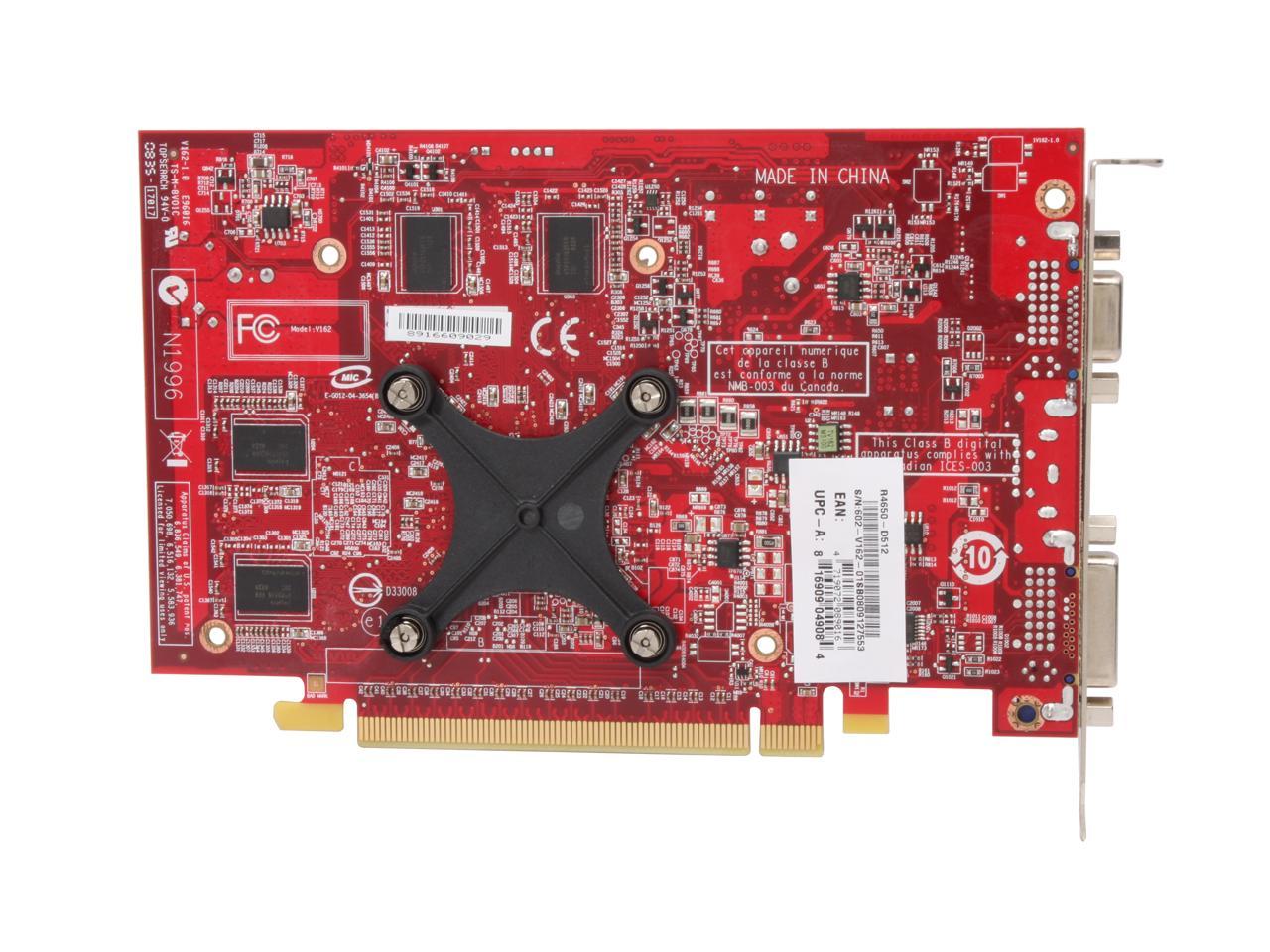 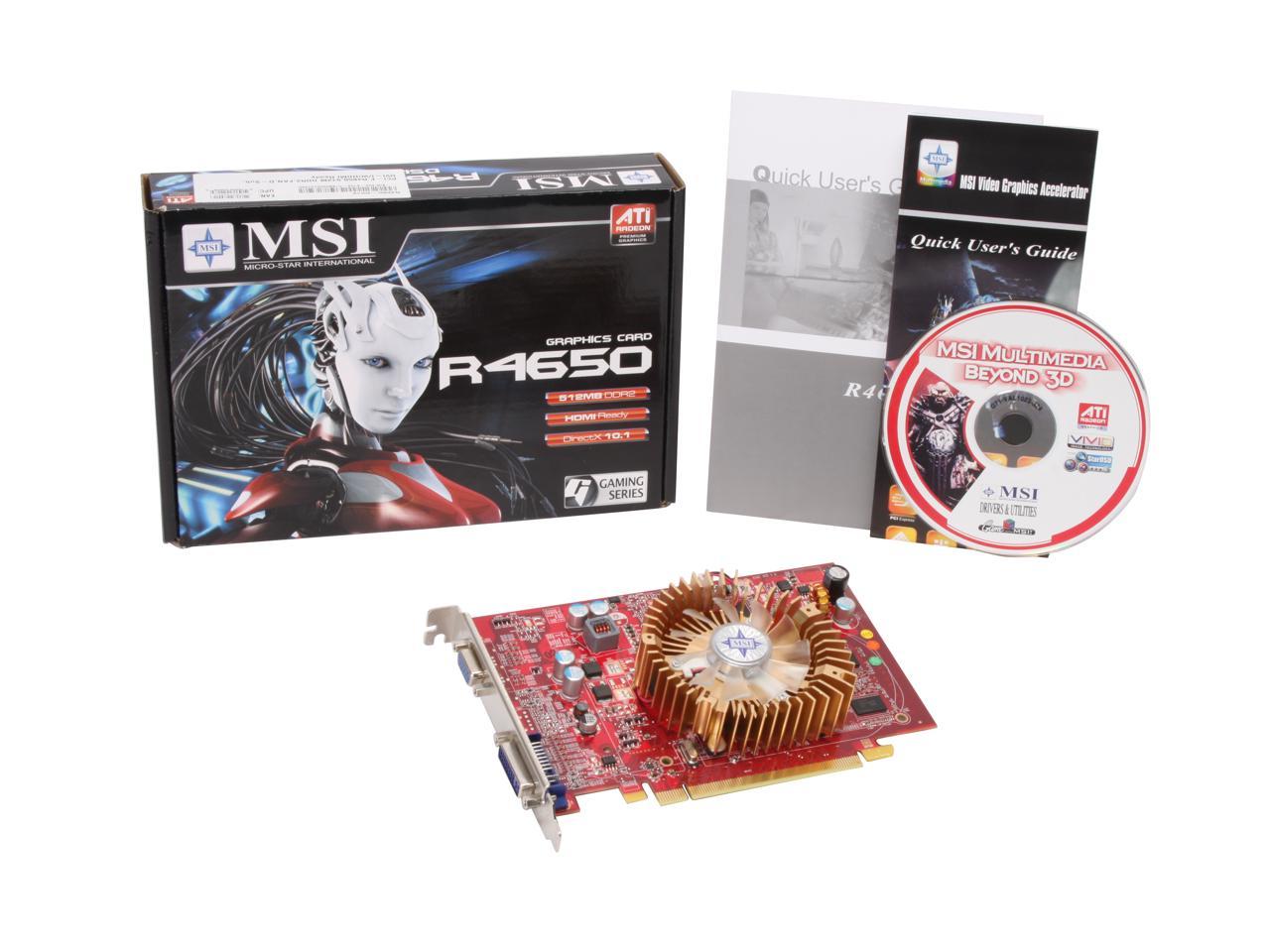 Cons: I don't know if mine is defective, but when sitting idle at the desktop the fan keeps repeatedly speeding up and slowing down, over and over. ATI Catalyst 9.1 shows temps between 31 and 32 with the fan bouncing between 0% and 100%. In other words, it's really annoying because of course you hear the fan cycling on and off every 5-10 seconds. Was able to work around this by setting manual fan control, but I don't like that solution. Like I said, I don't know if they all do this or just mine.

Overall Review: Other than the weird fan control, the card does a good job for a budget system with light-medium gaming.

Pros: For the price its great. I haven't seen any problems and have been playing Rainbow 6 vegas 2 and Crysis:warhead and have no problems with the game. Runs really smoothe compared to the onboard HD 2100.

Cons: I have no problems with the video card but the game on the other hand that it came with. Rainbow 6 vegas 2 has too many problems on its own.

2 out of 2 people found this review helpful. Did you?
Anonymous
Ownership: 1 week to 1 month
Verified Owner
Runs my c&c game at full setting without lag except when when my screen is full of units and explosions.11/20/2008 3:26:04 PM

Overall Review: I may buy another one and add on. Hopefully that will improve the slight lag when there are multiple things going on.

Pros: Good bang for the buck, plays my 1080p very smoothly. I have yet to try the hdmi interface. I'm not much of a gamer, but it plays the game it brought very smooth. I was researching for close to a month for a silent but powerful video card with just a heatsink, and all of them had temperature complaints, THIS one takes the cake for anyone who loves a quiet pc, this fan is virtually inaudible when you have a nice antec case.

Cons: So far nothing as far as performance, but the video card doesn't come with an HDMI to DVI converter, as is noted by the other posters, i will try to see if msi ships it as a poster below said.

Overall Review: This video card goes great with a quiet or near silent pc. My setup is as follows, Antec NSK6580 with a 420 Watt Earthwatts powersupply. Foxconn P45A-S. 640 GB Western Digital SATA HD. G-Skill 2GB DDR2 800. Wolfdale 3.0 ghz CPU with stock heatsink. And last but not least this video card. And its hard for me to hear a thing coming out of the case.

Overall Review: I bought this card for a new HTPC build and was attracted to the low power draw (< 50 watts) and new model at mid/low price point. I did run into a strange issue that I eventually resolved. When setting the resolution to 1920x1080 there was a black border surrounding the display. There is a scale setting in Catalyst that was turned on by default that was reducing the output and interpolating the pixels. Why that setting was turned on by default baffles me and for a while I thought there was something wrong with the card. Everything seems to be great now. Blu-Ray video through the card runs quite smoothly at 1080p. This card doesn't have on-board HDMI nor does it come with a DVI-HDMI adapter but the 10' DVI-HDMI cable I bought from **!!CENSORED!!** for $8.50 shipped worked out great.

Cons: Didn't notice this in the pictures on newegg, but it's my fault, their is no Crossfire bridge connectors. Not that I was gonna use it for crossfiring my other Radeons (4870,4850,4670...I collect Radeons :) ) but would've been nice to have it as an option. Your luck may be different from mine, but the core can only Overclock to 650mhz and the memory won't go much faster then 1Ghz(500mhz ddr2). This despite the nice big heatsink.

Overall Review: Due to the price increase of the impressively powerful (and popular) 4670, the price newegg is asking for this card is more palatable (before there was only a $10 difference between this and a 4670, making the 4670 a no brainer) now with up to a $30 delta between the 4650 and 4670 the 4650 kinda makes more sense.

Pros: Easy to setup. the fan is quiet. Connect to my SONY 52" LCD TV, The picture looks good. With POWERDVD 8, it playback BlueRay movie smoothly.

Cons: Don't come with DVI to HDMI adapter. Contact the customer service. It's $8 H&S fee. I ask for more info. But, no reply for last 3 days.

Pros: Works well in Vista (Sp2 RTM) and XP. I can tell that it has quite an edge over my old 3650, it's specs are roughly double in some areas. At current pricing it is unbeatable. For gaming it is a great card. It's computational power isn't great, though with FSAA abd such turned down or off the card will run anything at an excellent framerate. This is the card you want if you are on a tight budget but want to be able to play games. Being DX 10.1 compliant it should run anything so long as settings are turned down. As I said it just doesn't have a huge amount of processing power. It is like having half of a 4830. At the pricing it would be pointless to try to run these in crossfire when two of these are the price of one 4830.

Cons: Well, if you like fancy visual effects, you won't like this card. In newer games you will need to lower the effects and detail levels otherwise the card will run slow trying to do all of that wonderful math. Though I do recall that back in my day when a Voodoo1 was hot, the REAL gamers turned down all their settings for max frame rates. lol, so perhaps this IS the card for hardcore gamers??? ;)

Overall Review: If you're looking at it, just buy it. It's going to be worth it unless you really need something better. like was mentioned previously, the card has VGA out and DVI out, NO ADAPTERS or anything will come in the box. That's life, and that's why it's cheap! CCC sets the overclock to 700/540 for me and my fan is congested by a PCI card right below it. My case also has mediocre air flow. At 700 it's like 7% behind a 4670 in speed or around there. (4670 is 750MHz)