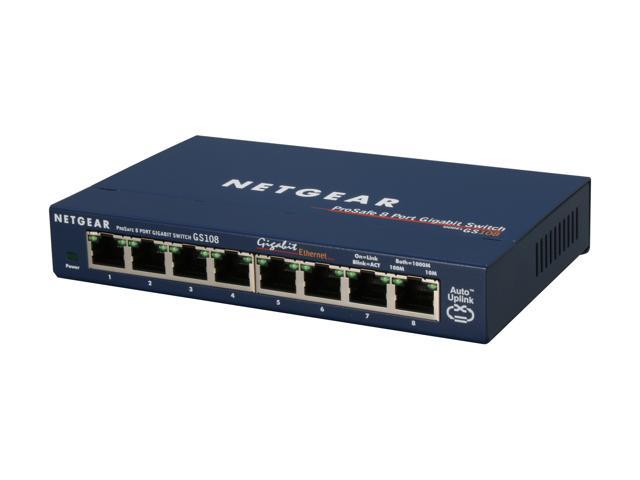 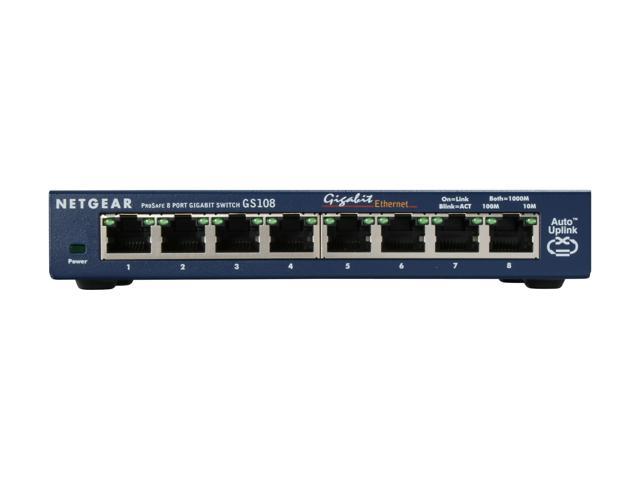 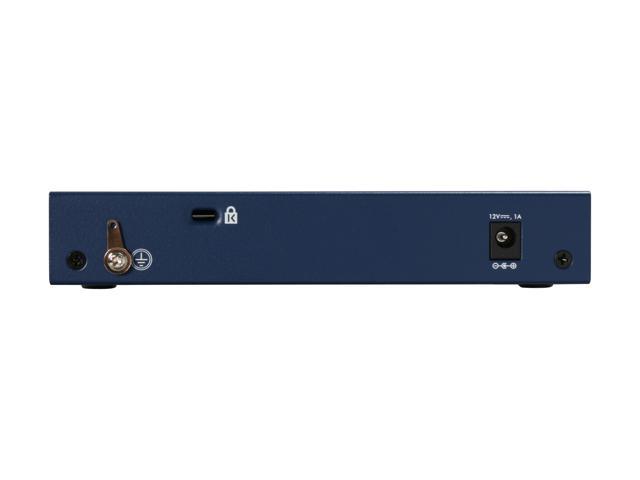 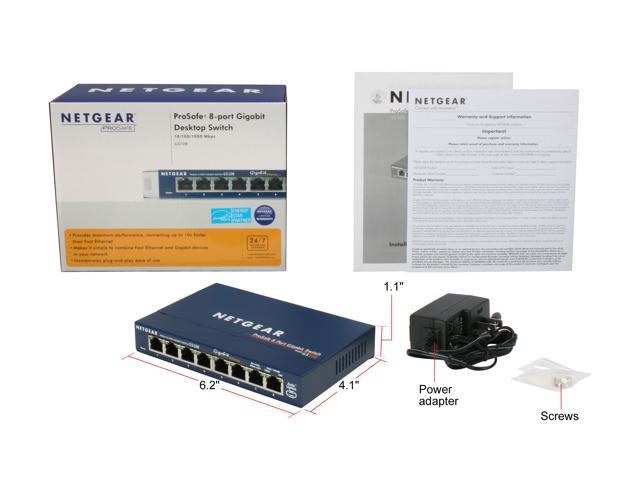 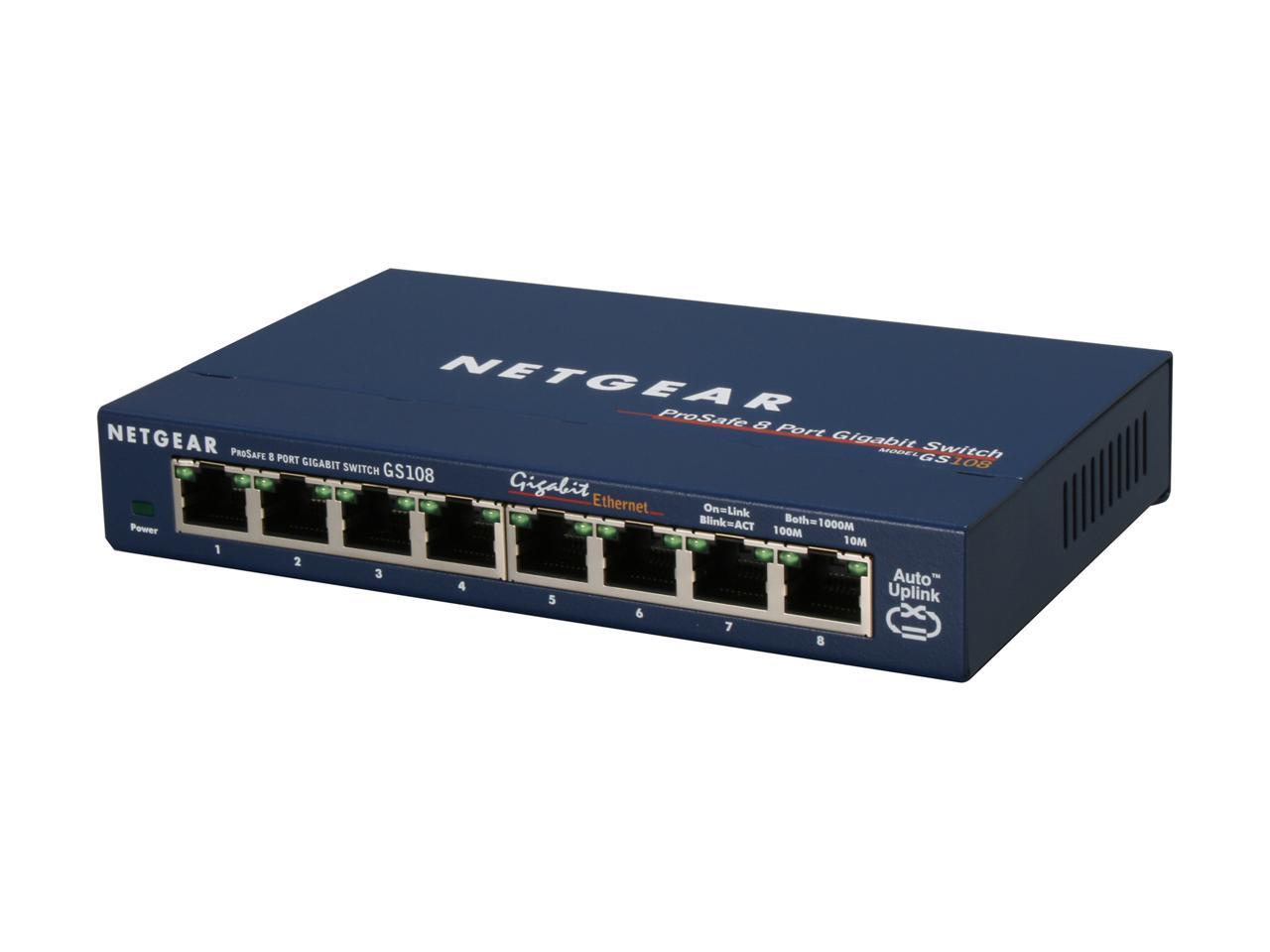 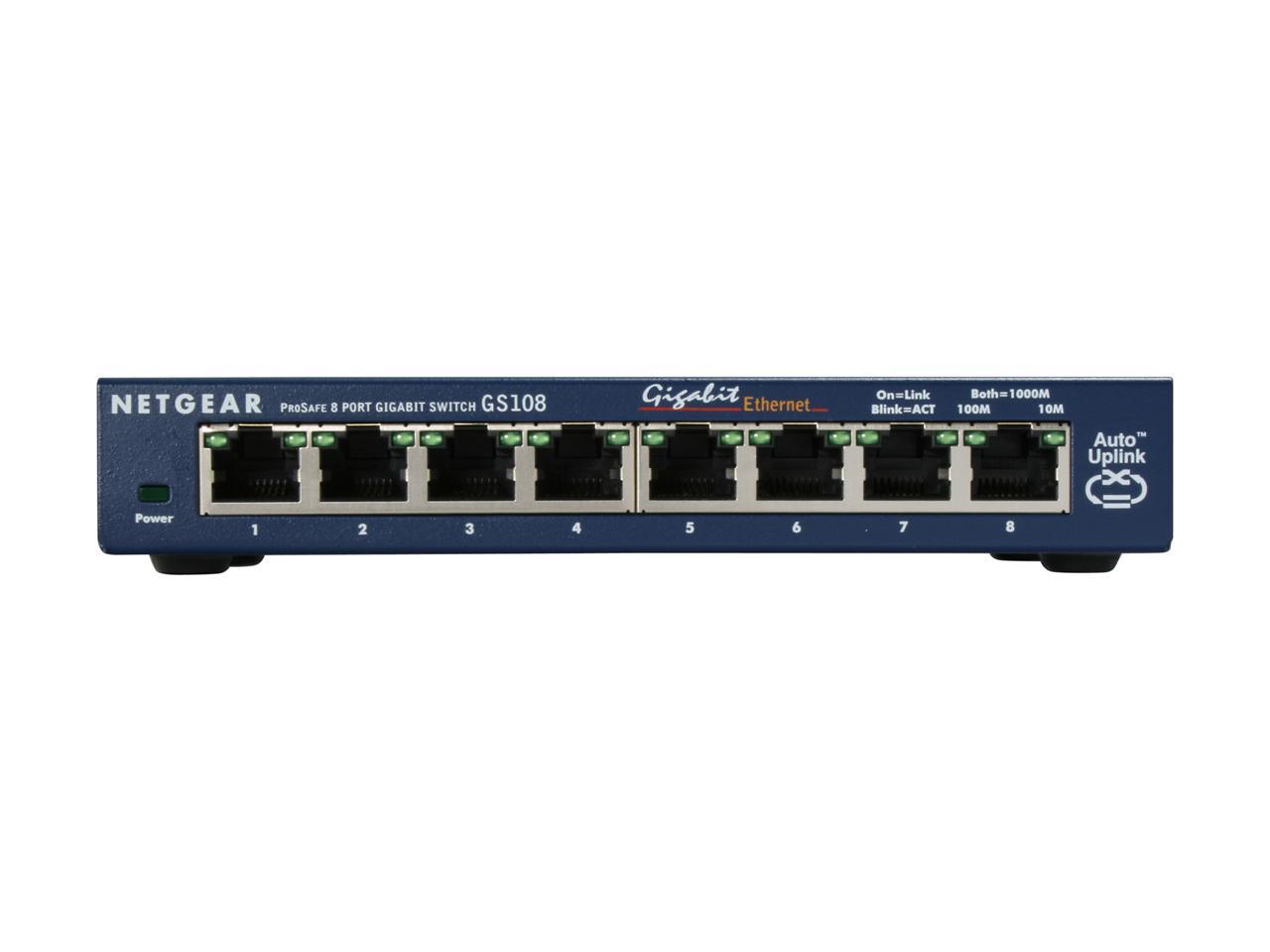 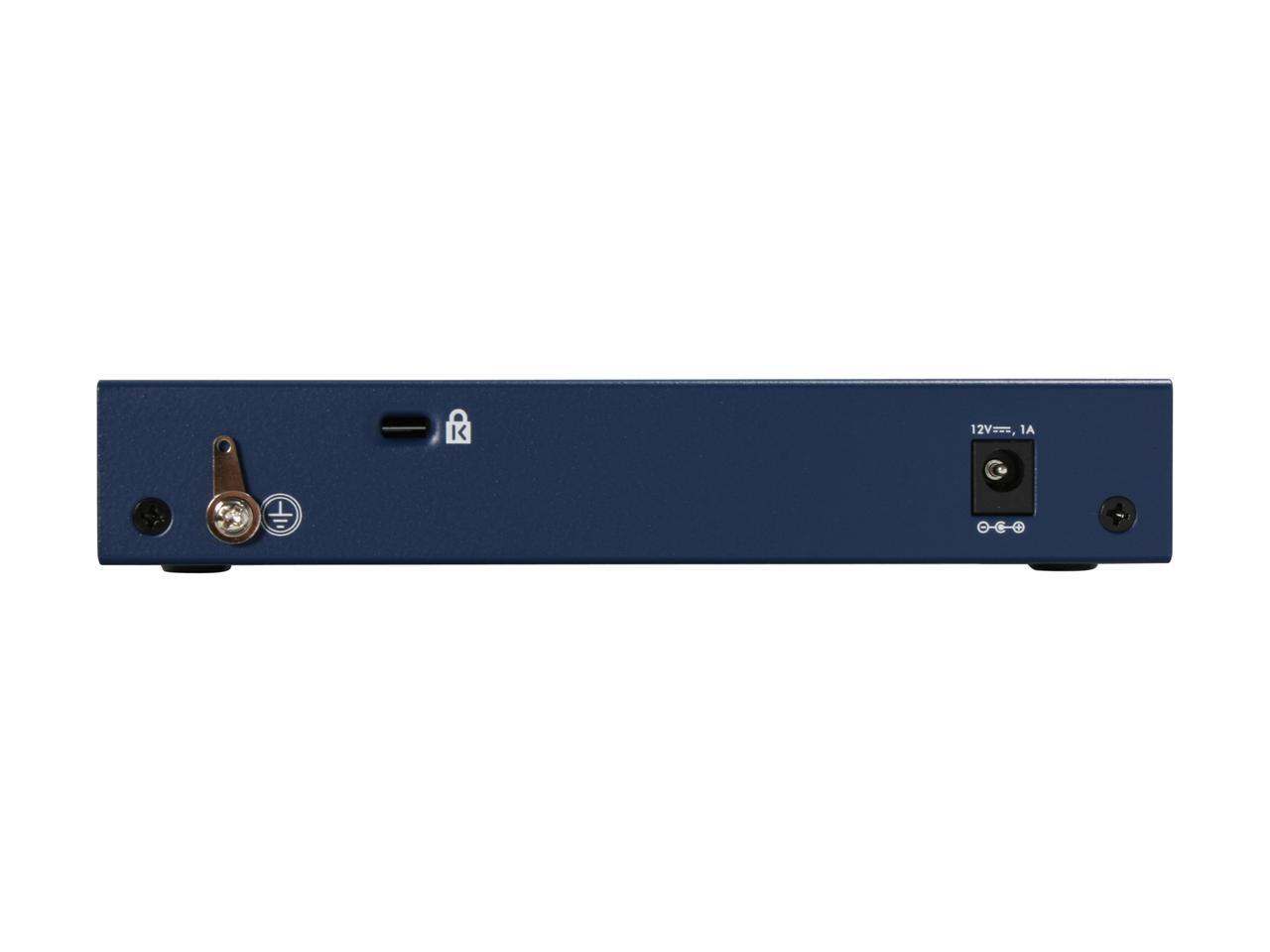 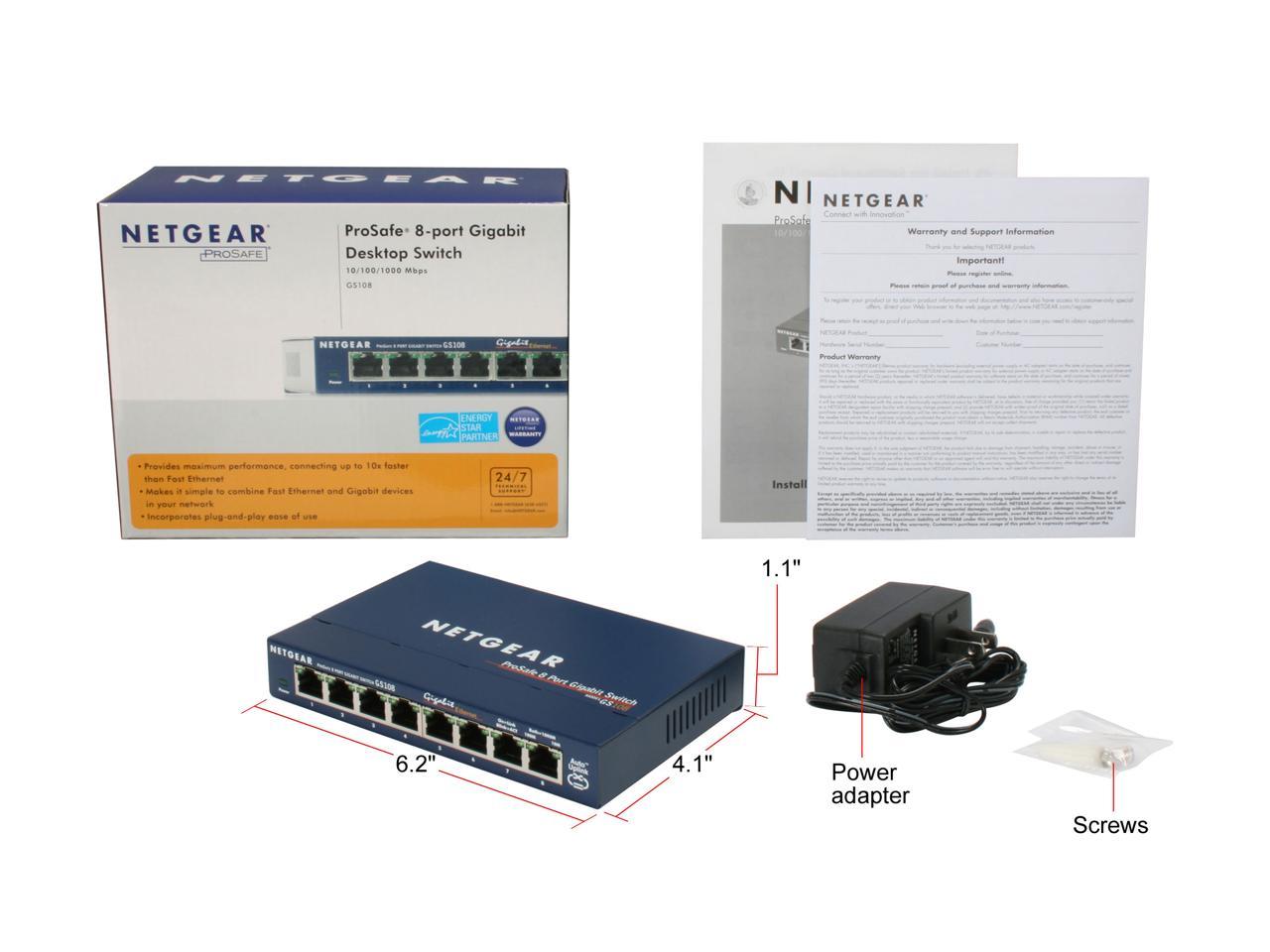 Cons: None noted in my installation

Overall Review: I have always opted for the less expensive plastic builds for my home networking, but... when it comes to installation in a business environment you really cannot compair them to a good solid metal build. Truely worth the small added expence for the peace of mind that it will not fall apart when it gets bumped around a bit.

Pros: Good price, full-duplex 1Gb and auto-uplink for all ports, very rugged all-metal construction, slim profile power transformer. The version I got, which was "v2" hardare, *DOES* support jumbo frames up to 9000 bytes. Take a look at the description on the Netgear site and you'll see that it has supported jumbo frames from v2 hardware onward, which started shipping in late 2005. The Netgear GS108 product page lists that they've even started producing "v3" now, as of March 2006, but they must not be to NewEgg yet. I doubt there's any danger of getting a v1 hardware unit at this point, since v2 has been shipping for so long. As a bonus, they also reduced the size of the unit, so the LEDs are integrated into the ports themselves, not in a row to the left like the NewEgg picture shows. Take a look at the Negear product page (first hit on Google for "GS108") for an updated photo and specifications.

Overall Review: Bought it primarily for a LAN party to facilitate quicker file transfers and it worked perfectly. Now I used it as a secondary high-speed network at home between my primary system and my file server. Eventually I'll move my other machines to GbE as well.

Comments: I upgraded from a GS104 to this GS108 and am plesently surprised. It's small for the number of ports and well built. The new switch runs much cooler than the old 4 port which means it uses much less power. It's power brick is also smaller and all in the plug which I find more convenient than the GS104's. I'm amazed at how cool they can get a 8 port gigabit switch to run even with all ports connected and without a fan. I now understand now how they can make the GS116 with twice as many ports and still no fan. One interesting difference I noticed was that the activity lights are on the port now, not on the light pannel next to the ports like on the 104. I think I prefer it the other way but it really makes little difference. Auto uplink is cool, it's time to have crossover cables go away and this is a good start. I continue to be impressed with Netgear's powerful little switches. I did a quick speed test and was able to copy a single 667MB file between machines in 34 seconds (19MB/s). A command line "copy [path] nul" command on the same file finished in 24 seconds (27 MB/s). Going through both the GS108 and GS104 with the same command yielded 26 seconds (25MB/s.) While this is not anywhere near a good benchmark it's telling me my disk write speed is my limiting factor and that I should be able to transfer files across the network as fast as my disk can write them. Also, since the speeds are roughly twice the theoretical limit of 100Mbit, it tells me there is a very noticable difference between Gigabit and 100mbit, even for simple home use.

Pros: When it works, it works great. Solid, heavy case.

Cons: I've had to repair the unit twice since I purchased it. Both times the lights started blinking steadly. The PS was OK. Opening it, an electrolytic capacitor was bulging. Replaced it, and everything again worked OK. Happened again a year later. The thing is, the caps were being used too close to their maximum working voltage. I replaced their caps with a higher quality and higher voltage cap (same 1000uf value though). Because the caps were twice as large, I had to play games to get them to fit in the box. There are three more caps, that will probably need to be replaced eventually.

Overall Review: I've owned this for over 6 years (before Newegg existed). I've found performance great, when it works. I'm disappointed with their cutting of corners with key components. Having been an engineer and technician for over 40 years, I've seen a lot of junk on the market. This is not the worst, but there is still no excuse for this kind of corner cutting.

Pros: I have 4 of these. The switch works great until the power supply starts to fail. Over the past two years the power supply of 3 of these devices has died. I'm down to my last working power supply/switch. The other 3 units work fine when I test them with the one good power supply.

Cons: No power supply = no switch. You have to make sure you read the fine print. The lifetime warranty does not cover the power supply. Very deceptive if you ask me.

Overall Review: I would stay away from this device simply because of the track record with the power supply. Looks like I'm not the only sucker.

Pros: I have 3 of these units that I purchased over a 2 year period. They all worked fairly well at first!

Cons: All 3 units have failed at some point, the last one that I purchased lasted less than a year. I have experienced the same problem as everyone else. All of the link lights start blinking an you loose connectivity. Lights stop blinking if only 2 ports are used. I have RMA'd 2 of these within the last week. The first unit that I purchased in late 2006 has failed twice.

Overall Review: I don't understand why Netgear does not fix the problem. The unit has a lifetime warranty, this issue has to be costly to Netgear.

Overall Review: For those of you who do not know the difference between a switch and a hub, a switch supports transparent bridging, hubs do not. Switches have less packet collisions, so if you are looking at a hub, dont, get a switch. Switches are faster.